As a huge Roald Dahl and Quentin Blake fan, I am so excited to share this news with you all.  This autumn, Roald Dahl fans can complete their collection with a brand-new edition of Roald Dahl’s
final children’s book, The Minpins, reimagined by Quentin Blake.


Publishing in an exciting hardback
edition featuring Quentin’s iconic black-and-white illustrations, the book will have a ‘new’ title.
Billy and the Minpins was a title Roald himself contemplated in an early draft of his story. This title
celebrates Billy as the quintessential Roald Dahl child hero that he is, and puts him on equal footing
with the likes of Charlie, James and Matilda.

Billy and the Minpins is the story of heroic Billy who saves the Minpins, tiny tree-dwelling people
whose children are the size of matchsticks, from the fearsome Gruncher. It explores themes seen in
many of Roald Dahl’s other much-loved children’s novels including; small people living in a big world;
the glory of flight; confronting demons; and, most importantly, the child hero. In Billy and the
Minpins, readers will experience again the magical collaboration between Roald Dahl and Quentin
Blake through a brand-new interpretation of Roald’s parting gift.


The Minpins was first published in 1991, illustrated by Patrick Benson in a beautiful colour picturebook
format. This edition is still in print today (and available to buy here) and will sit alongside the new black-and-white edition,
Billy and The Minpins.


‘I was delighted to be asked to illustrate Roald’s Billy and the Minpins; it feels
like the cornerstone in our long collaboration together. As Roald’s parting gift, Patrick Benson’s
illustrations in the original edition were perfectly suited to the lyrical feel of The Minpins. I have
always greatly admired Patrick’s artwork and am so pleased both books will sit alongside each other,
reaching fans of all ages. This new edition has nearly fifty pages of black-and-white drawings, which
means I can enjoy myself tremendously going into all the details of Billy’s exploits and adventures
with the Minpins in the mysterious forest!’


‘The Minpins was Roald Dahl’s final story for children and it is the only one his principal
illustrator Sir Quentin Blake has yet to illustrate. The two began working together almost forty years
ago (on The Enormous Crocodile, published in 1978) – a collaboration that has captured millions of
children’s imaginations. With this new edition of Billy and the Minpins, it seemed an irresistible
proposition that Quentin should close the one remaining gap in his partnership with Roald. The new
title is drawn from the title Roald gave to an early draft of the story. We think it’s perfect as Billy is a
quintessential Roald Dahl hero and deserves to be seen in the same light as Charlie, Matilda, James,
Sophie and all the other child heroes readers around the world know and love.’


‘On the final page
of his final book, The Minpins, Roald Dahl wrote “Those who don’t believe in magic will never find it”.
What better way to celebrate that Dahl magic than with Quentin’s new illustrations, as he
reimagines the magical world of the Minpins. Following Roald Dahl’s centenary celebrations in 2016,
it feels like the right time to focus on his final and possibly least well-known children’s story and to reintroduce
warm-hearted, mischievous and brave little Billy to a new generation of readers.’ 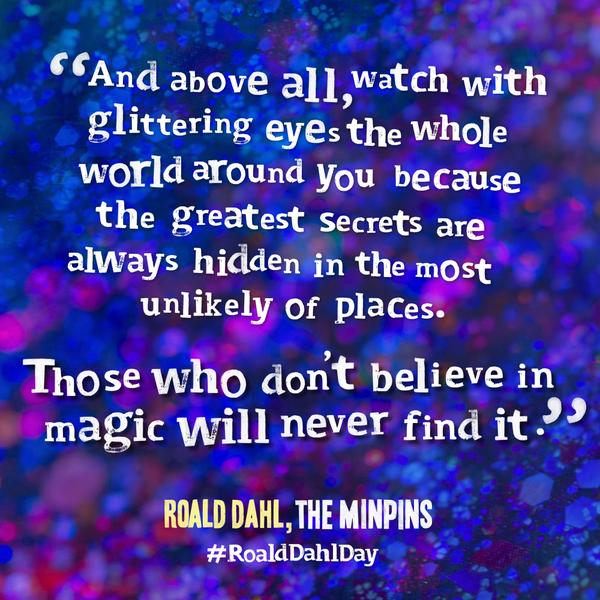 ‘And above all, watch with glittering eyes the whole world around you because the greatest secrets
are always hidden in the most unlikely places. Those who don’t believe in magic will never find it.’

While you wait you can buy the original Roald Dahl Box Set here.