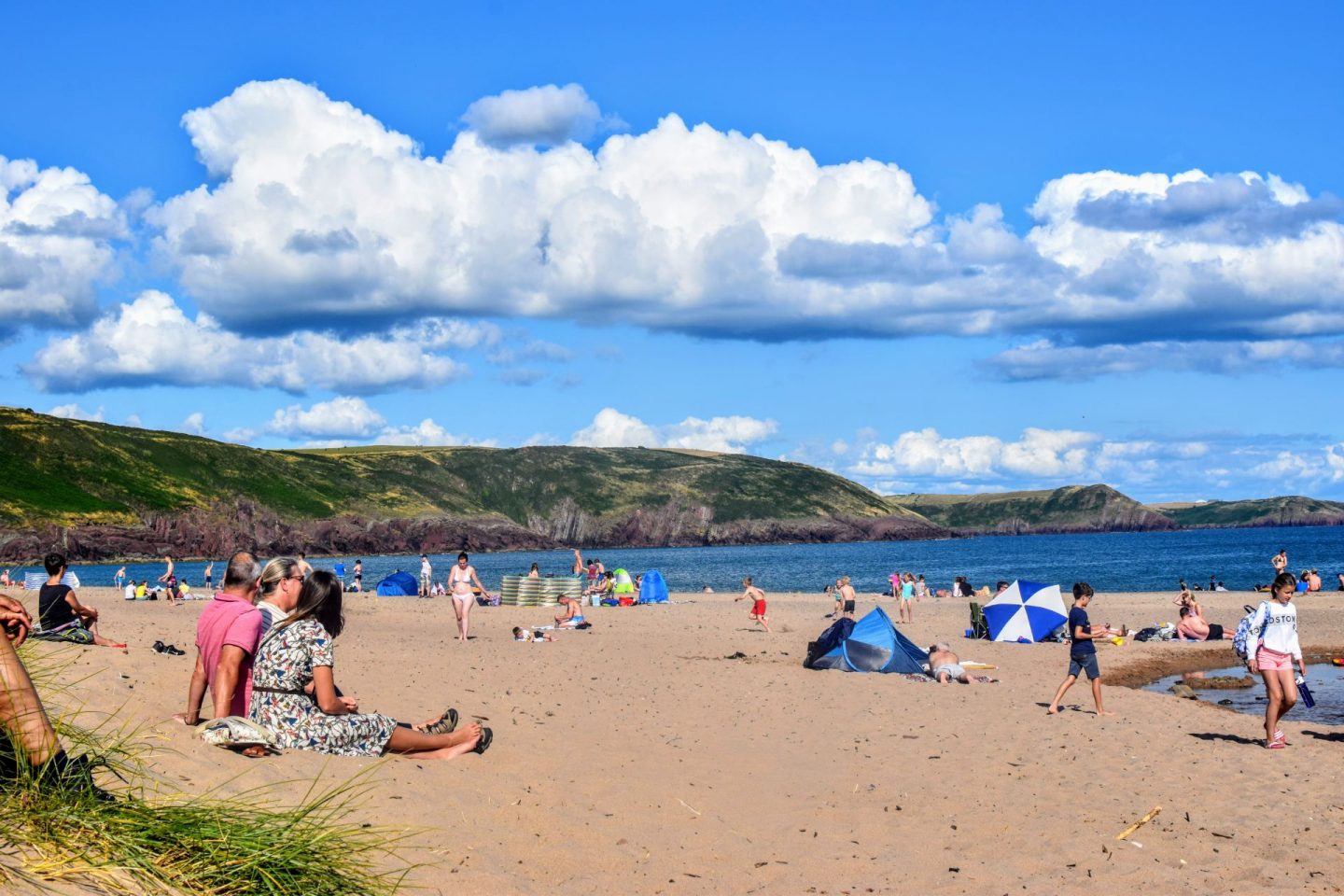 We recently celebrated the one year anniversary of Sid, the Jack Russell coming to live with us.  The day started like any other and we had no idea that by that evening we’d have a new addition to the family.  It was a Sunday and we were looking for somewhere to take the kids to have a run around for a few hours.  We settled on Freshwater East and had a lovely day: 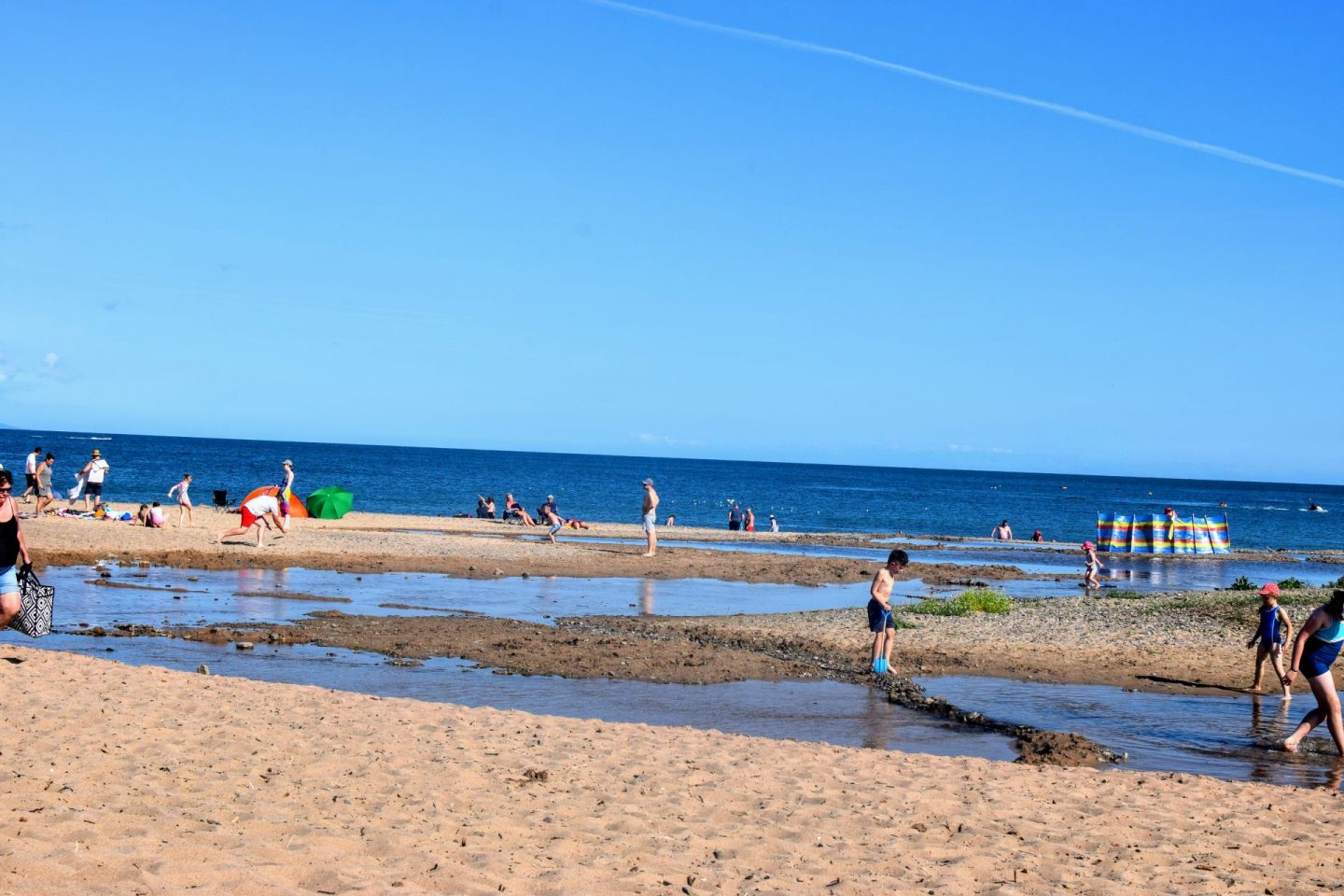 There is a National Park Pay and Display Car Park across the road from Freshwater East Beach (Sat Nav:  SA71 5LW).  The sand dune-backed beach is a wide bay of soft golden sand with a stream running through the beach at its southern end.

At low tide, the sea reveals plenty of sand for playing ball games and space for all.  At the Eastern end, the low cliffs provide some nice private ‘bays’.  It is dog friendly and dogs are allowed all year round.  Therefore, as you can imagine it’s very popular with dog owners and there are often dogs off leads running around.  If you prefer dog-free beaches, Pembrokeshire has lots of them available to visit too!

If you’re planning to visit, check out the tide times to make sure you’ve plenty of sand to play on and be aware of getting cut off by the incoming tide.  It’s generally a safe beach to swim at but always check the conditions and remember this beach is not lifeguarded. 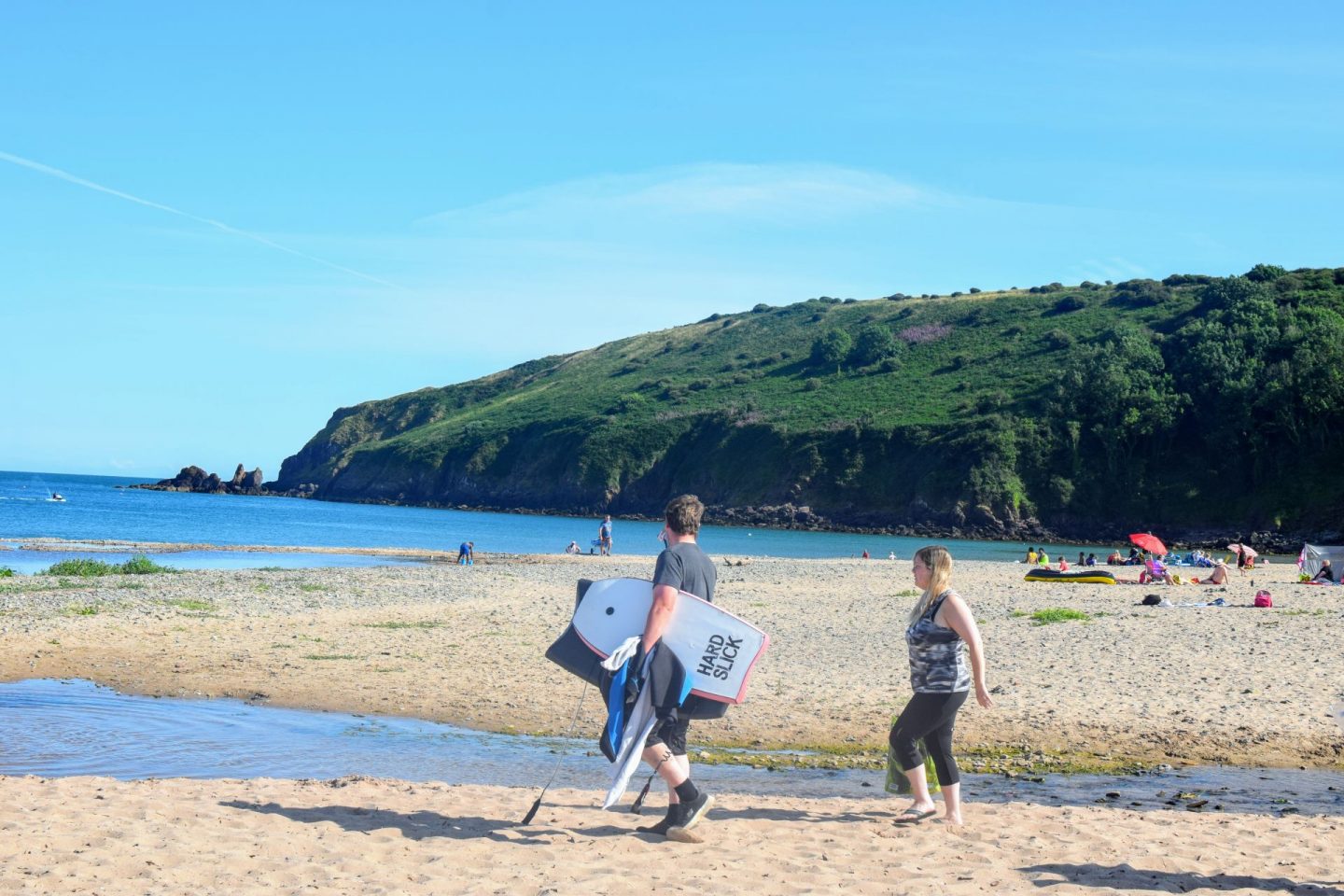 Our Day At Freshwater East

As we were laying on the beach, we saw lots of dogs running around off leads.  They were all behaving, having fun and making friends with other dogs, which I love to see.  I said to Dave, in a few years when the kids are older,  we might be back here with a dog of our own.  I hoped that our dog would also be well trained and socialise well with other dogs, as well as all humans of course!  Dave brushed it off and said that wouldn’t be for a few years and I completely believed him, as we\d previously agreed that we weren’t ready for a dog yet. 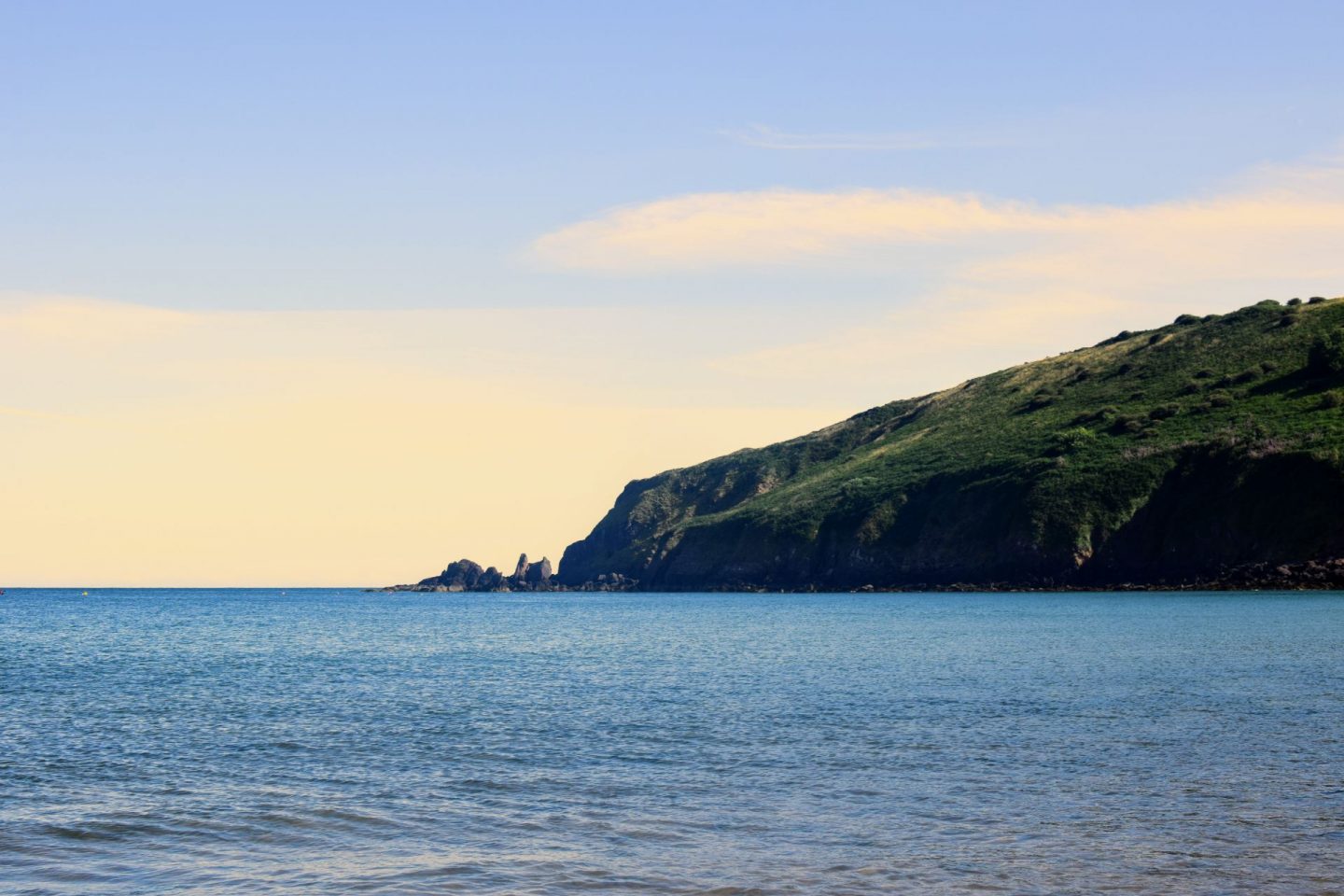 We watched as the kids played together and went off for a paddle.  I joined them for a swim, in between laying down with Dave, enjoying the sun, chatting and reading my book.  I really miss bringing a Sunday paper to the beach to read but since the demise of The Independent (and therefore Independent on Sunday), I haven’t found a newspaper I’m happy to buy. 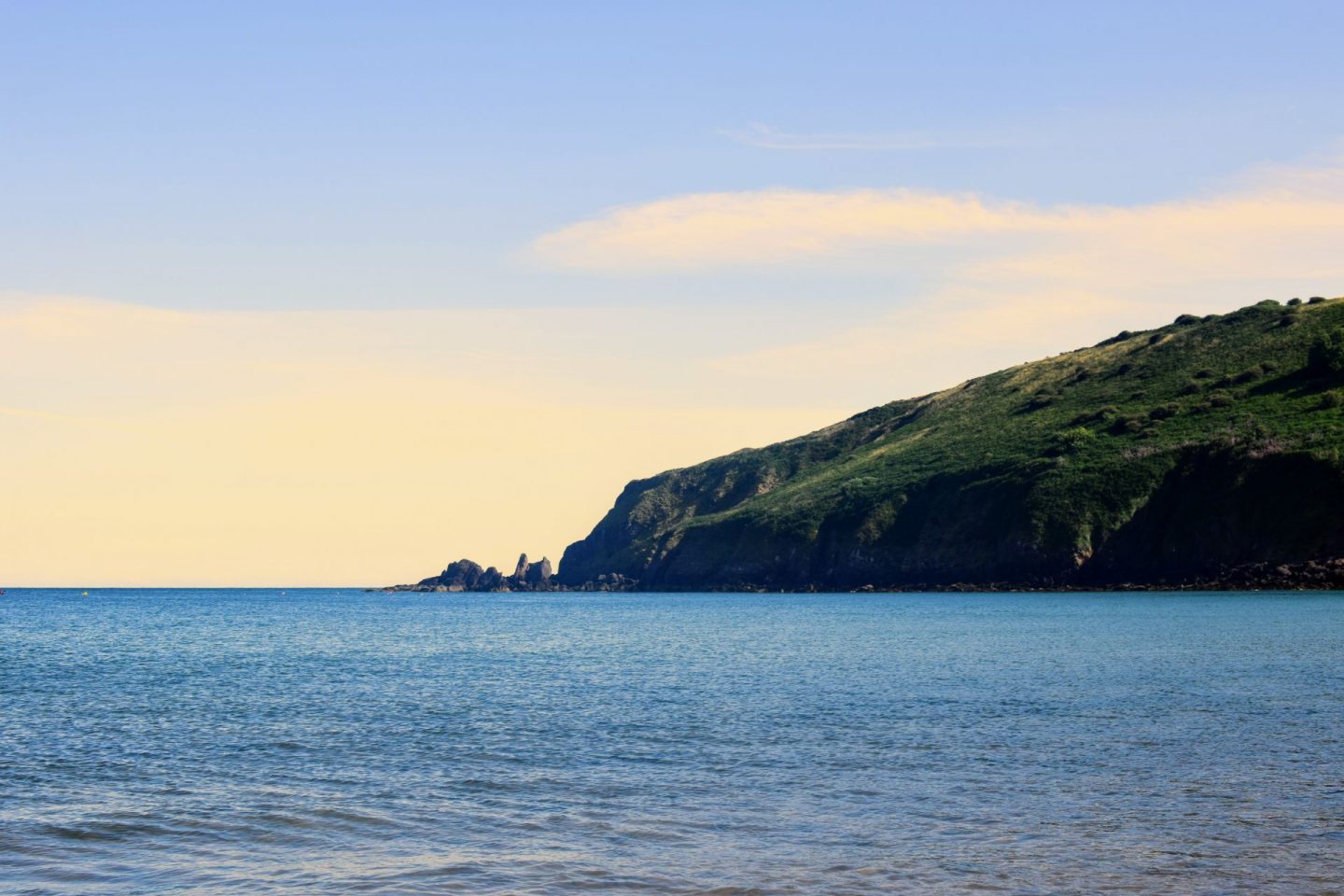 I just love the sights and sounds of the beach. 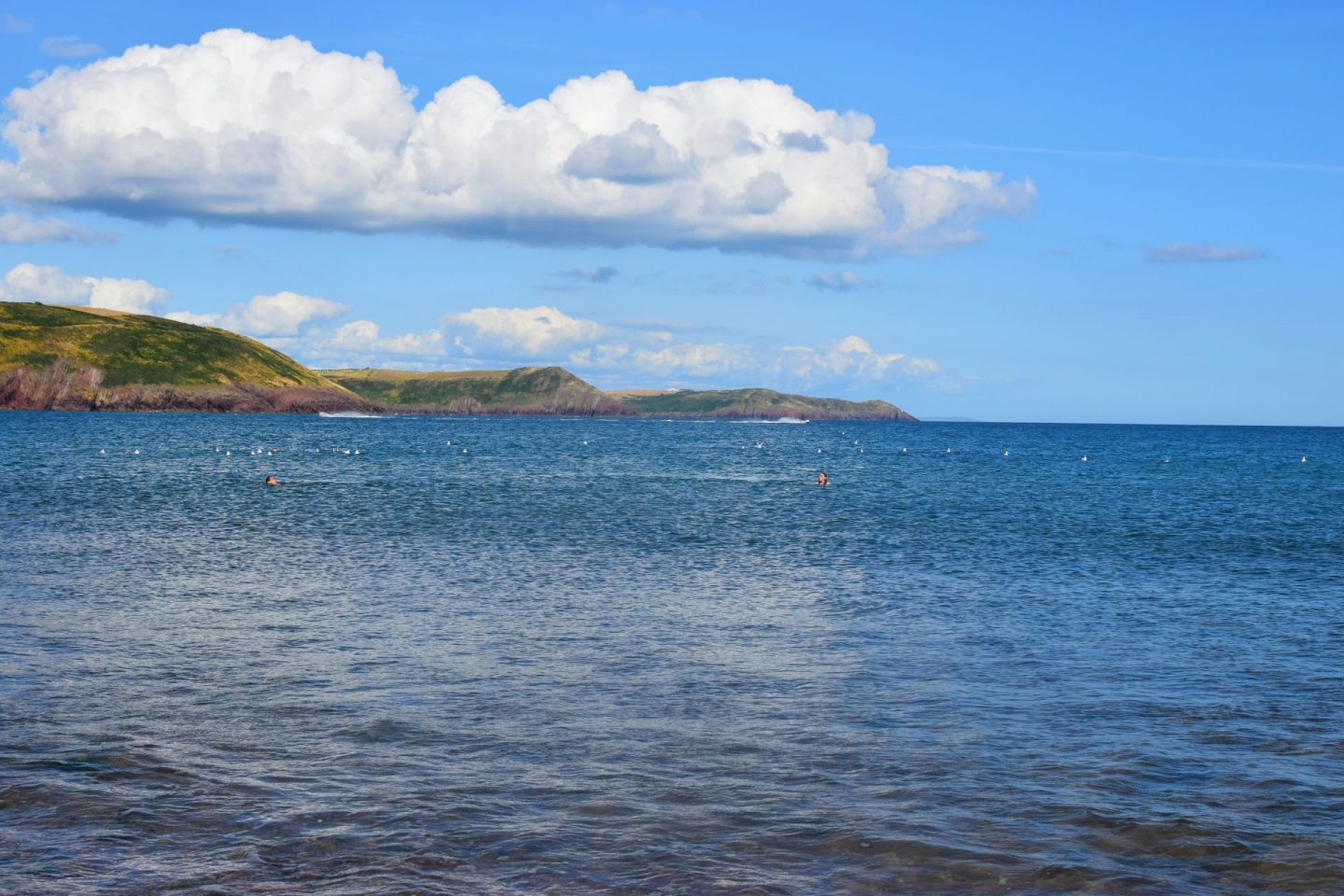 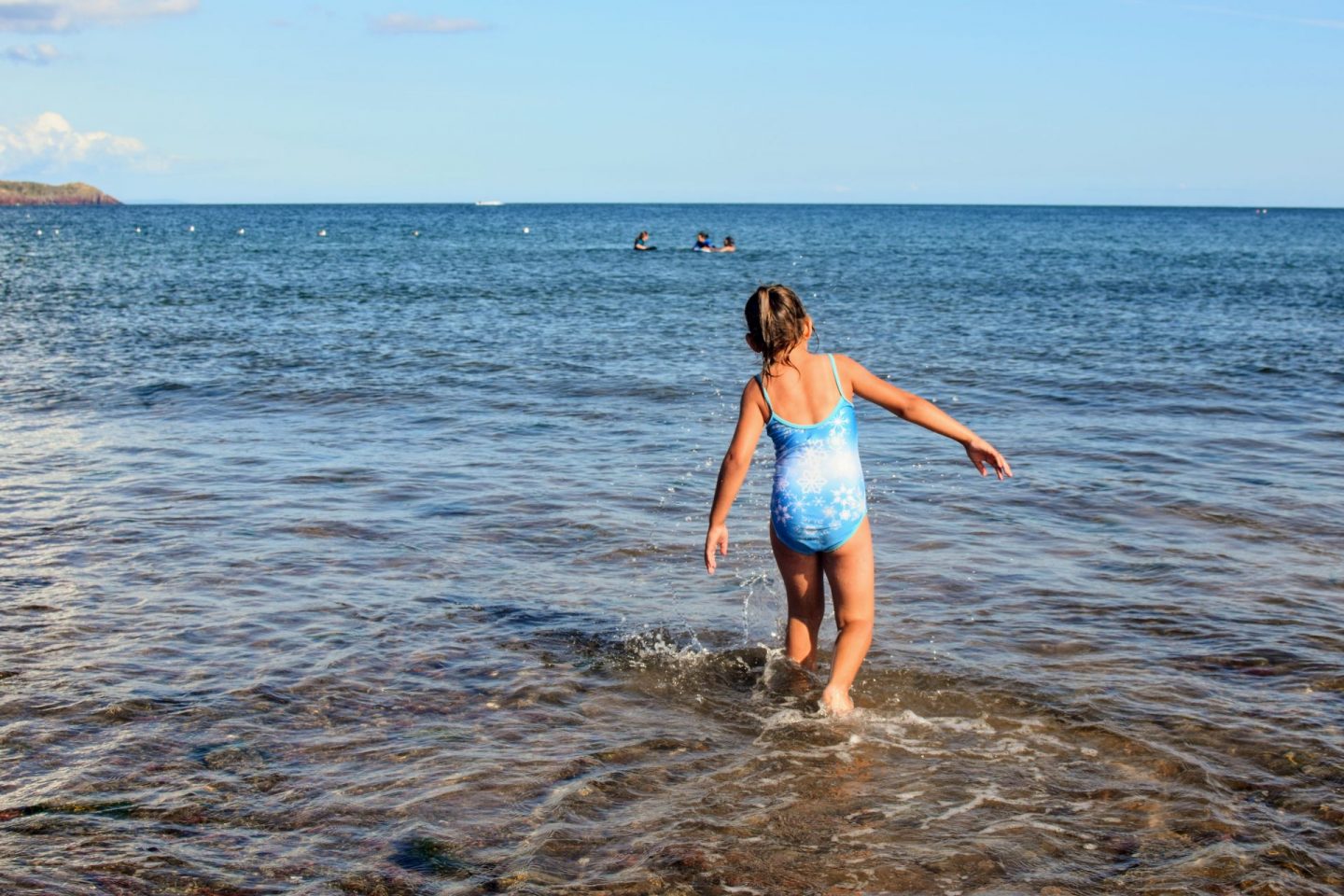 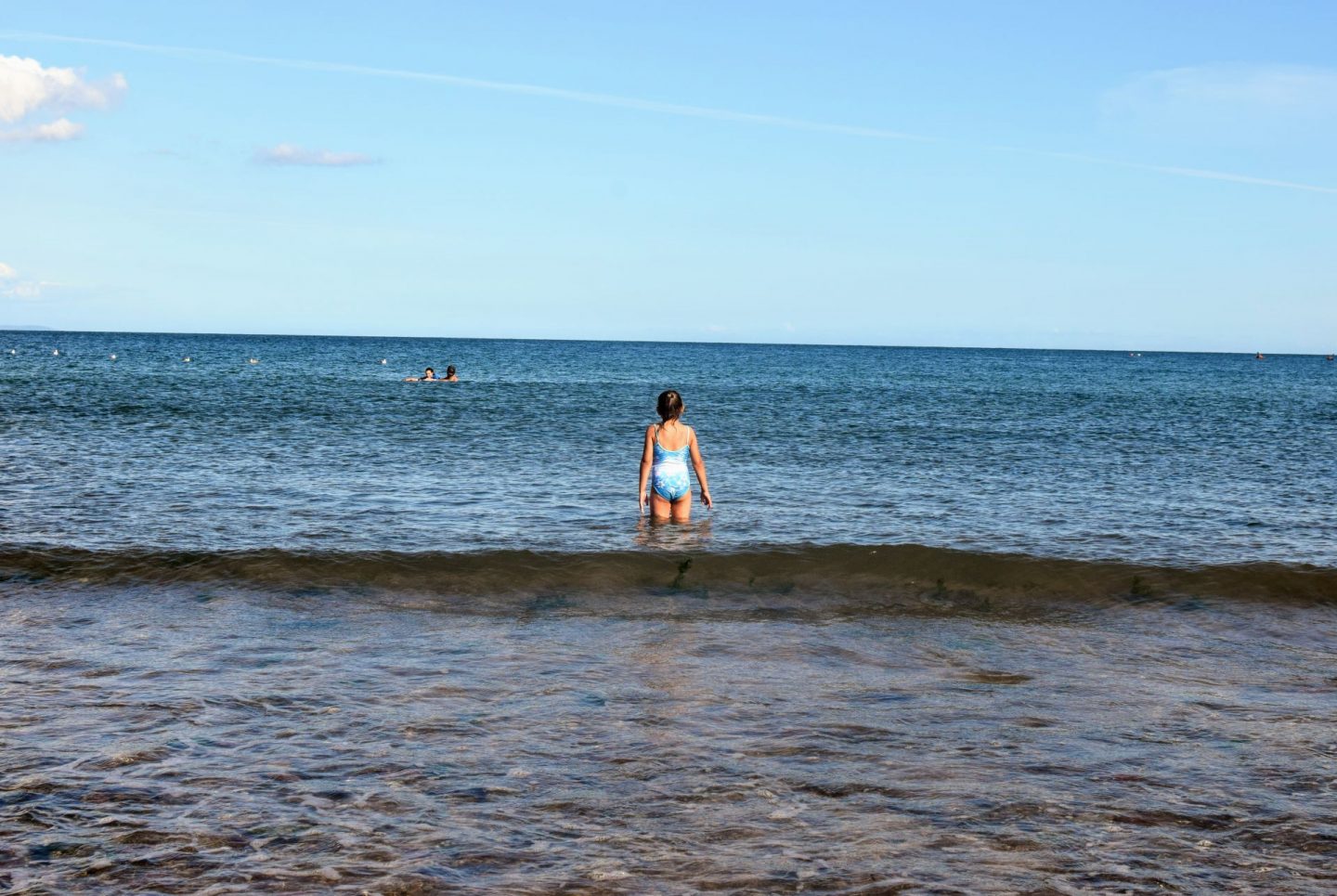 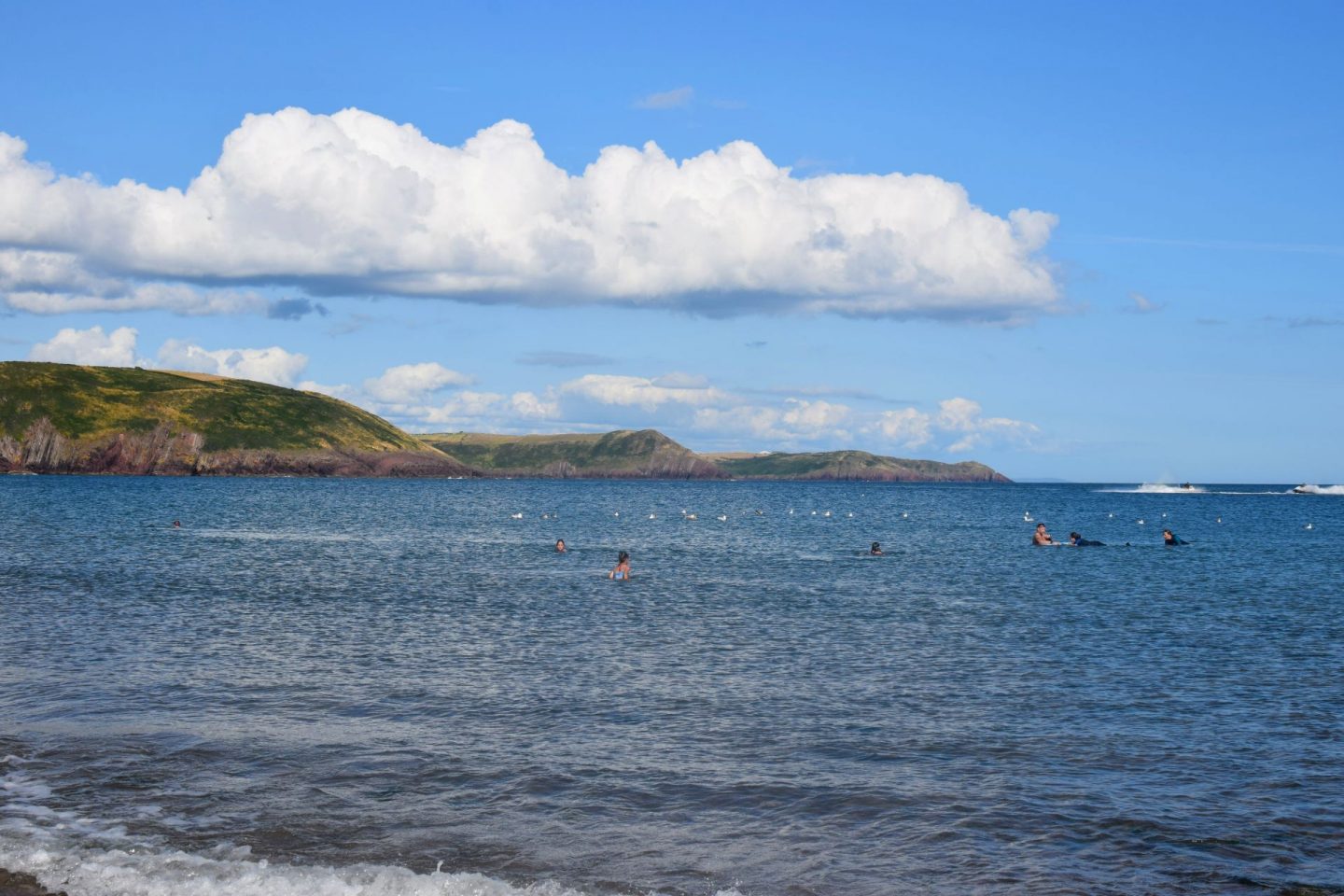 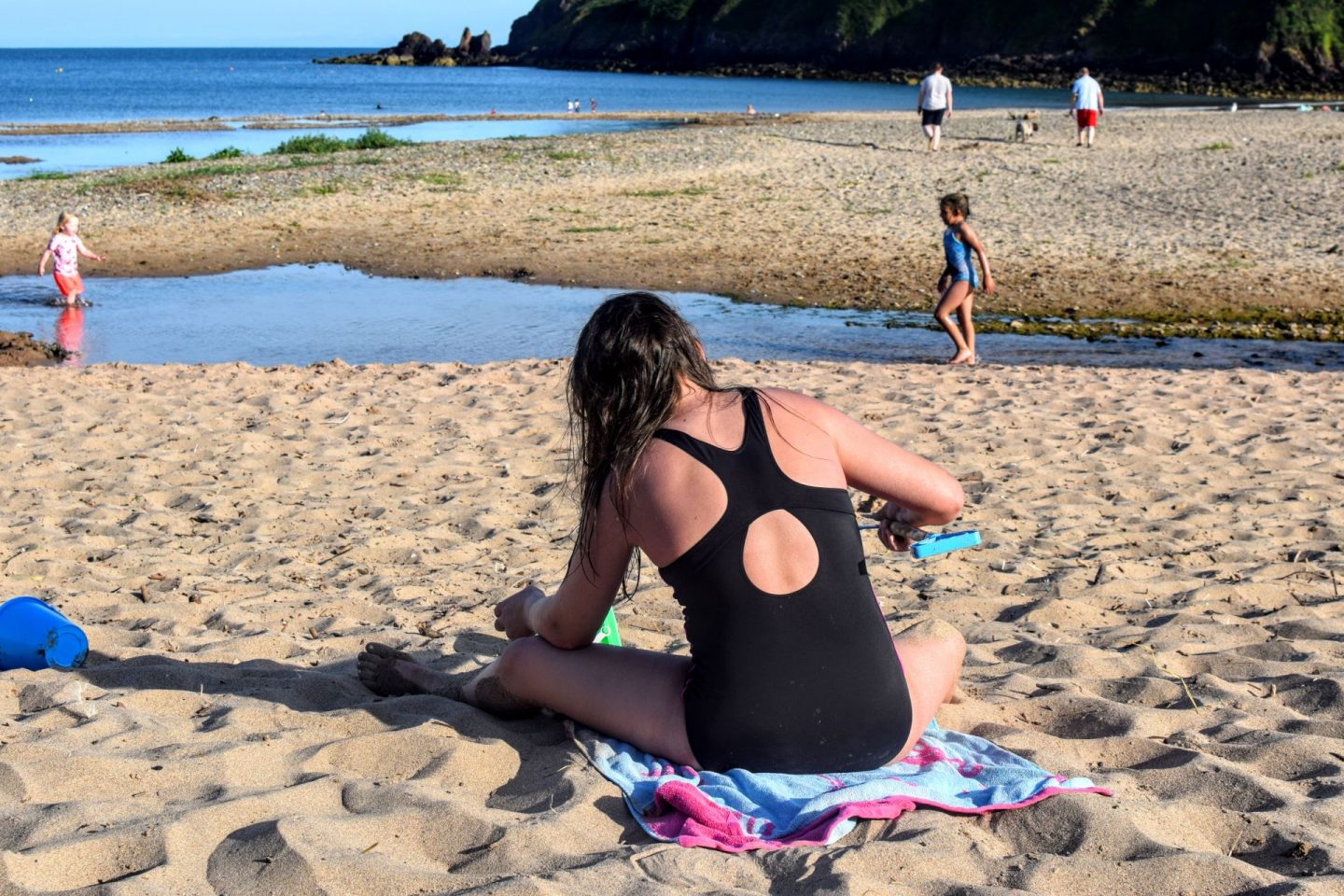 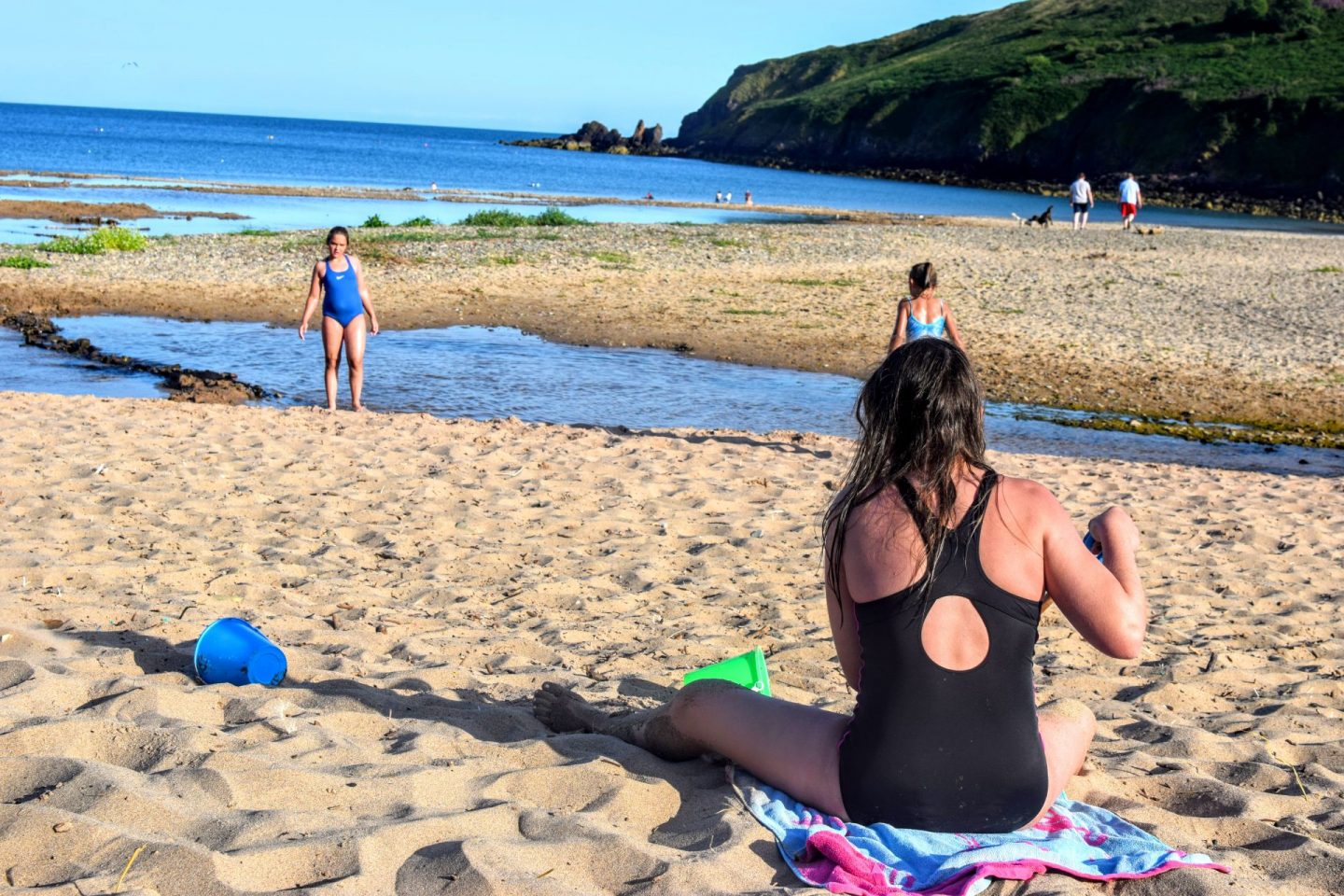 You can see part of the stream here. 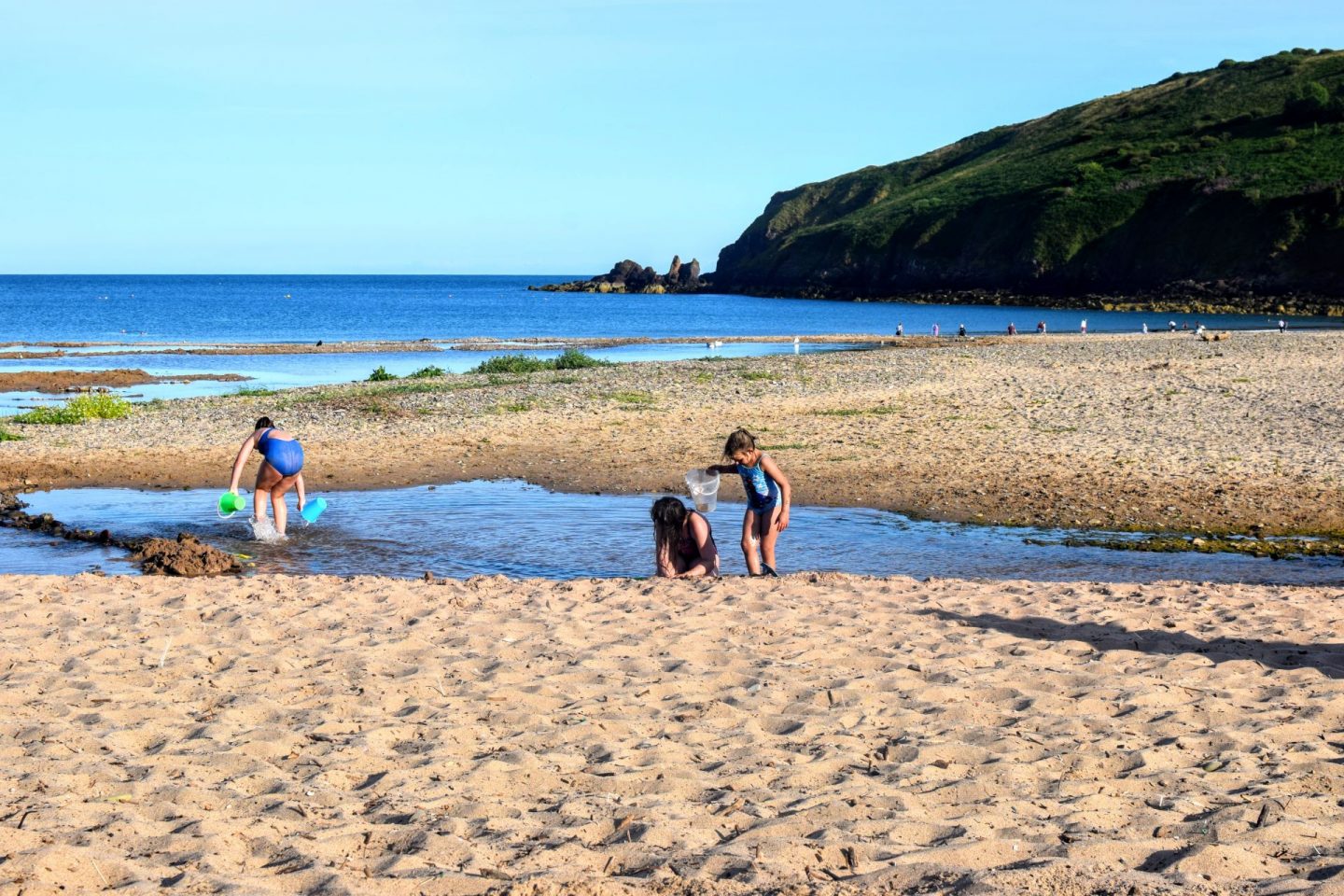 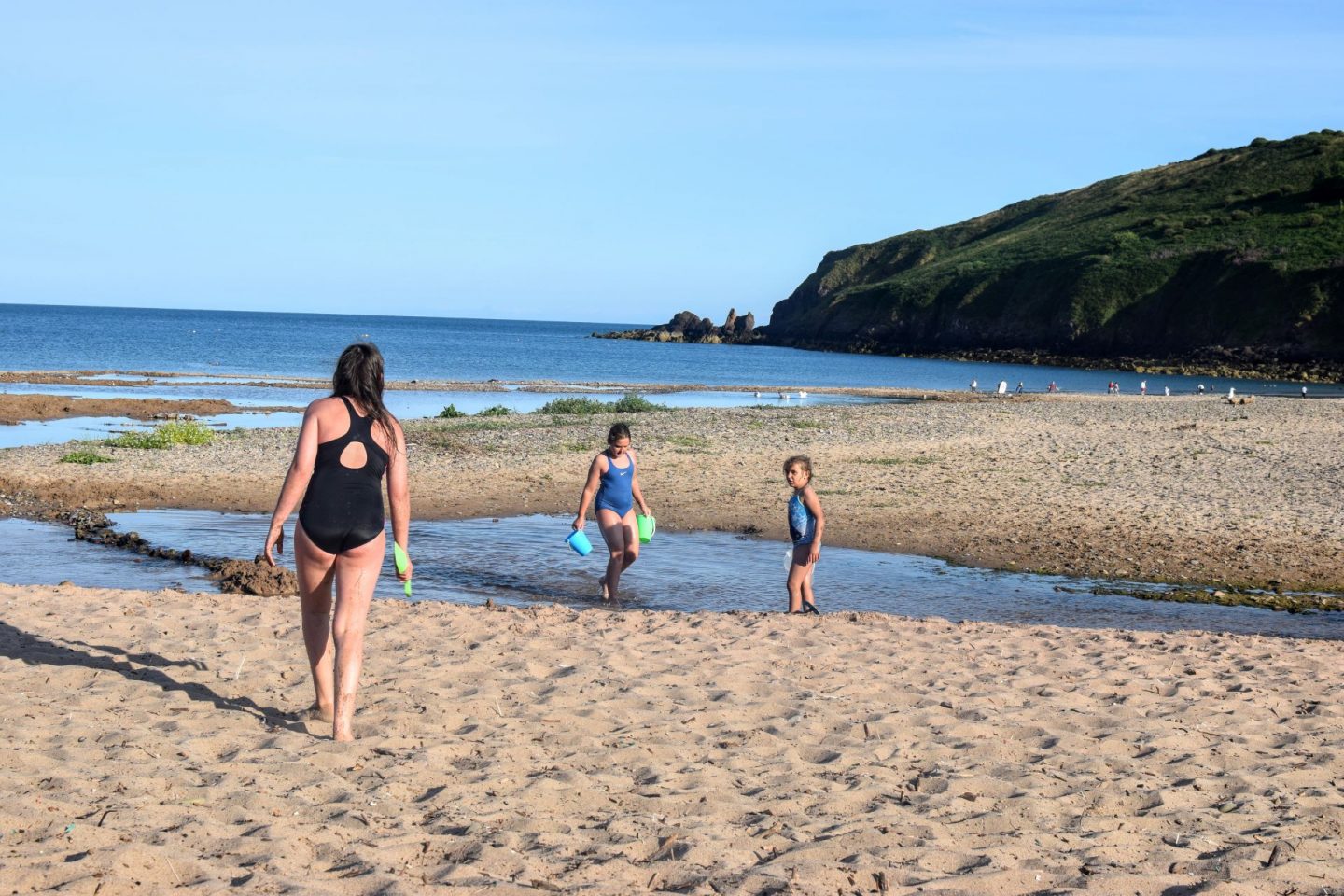 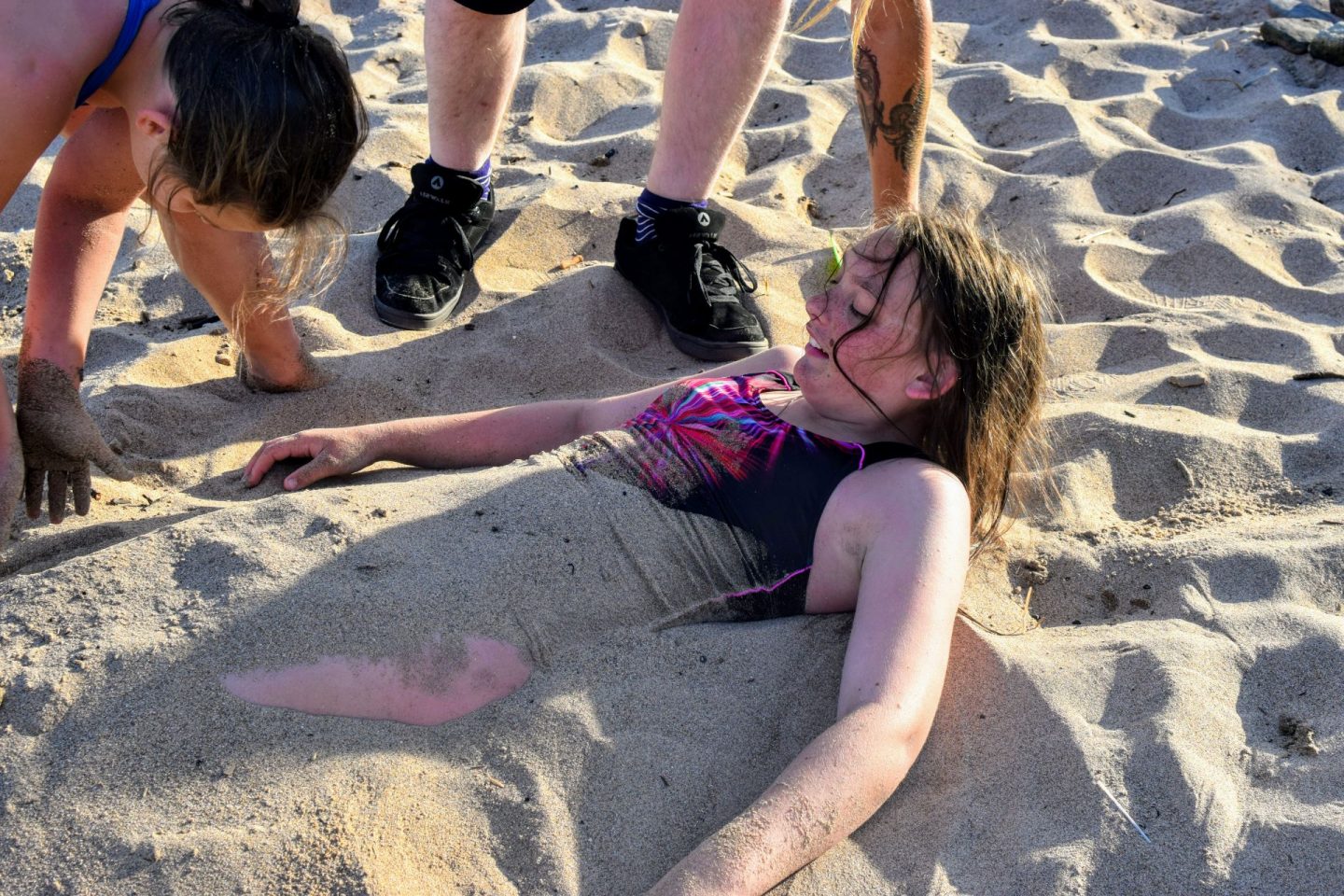 Freshwater East is a lovely sandy beach, I always describe the texture as “Mr Whippy sand” as that’s what I called it when I was younger.  I remember our parents sometimes asking us what sort of beach we wanted to go to on that day- we’re lucky to have ao much choice in Pembrokeshire.  Depending on our desired activity for that day we’d then choose either a soft sand “Mr Whippy” beach, or a hard wet sand beach for sandcastles, one with the best waves for playing on our inflatables, rock pools for exploring or a sun trap for sunbathing (well I never chose this one.  I hated sunbathing as a child and would get annoyed when my older sister wanted to sunbathe instead of coming for a swim with me.  It seemed so boring.  I think I’d love that level of relaxation now) and so on. 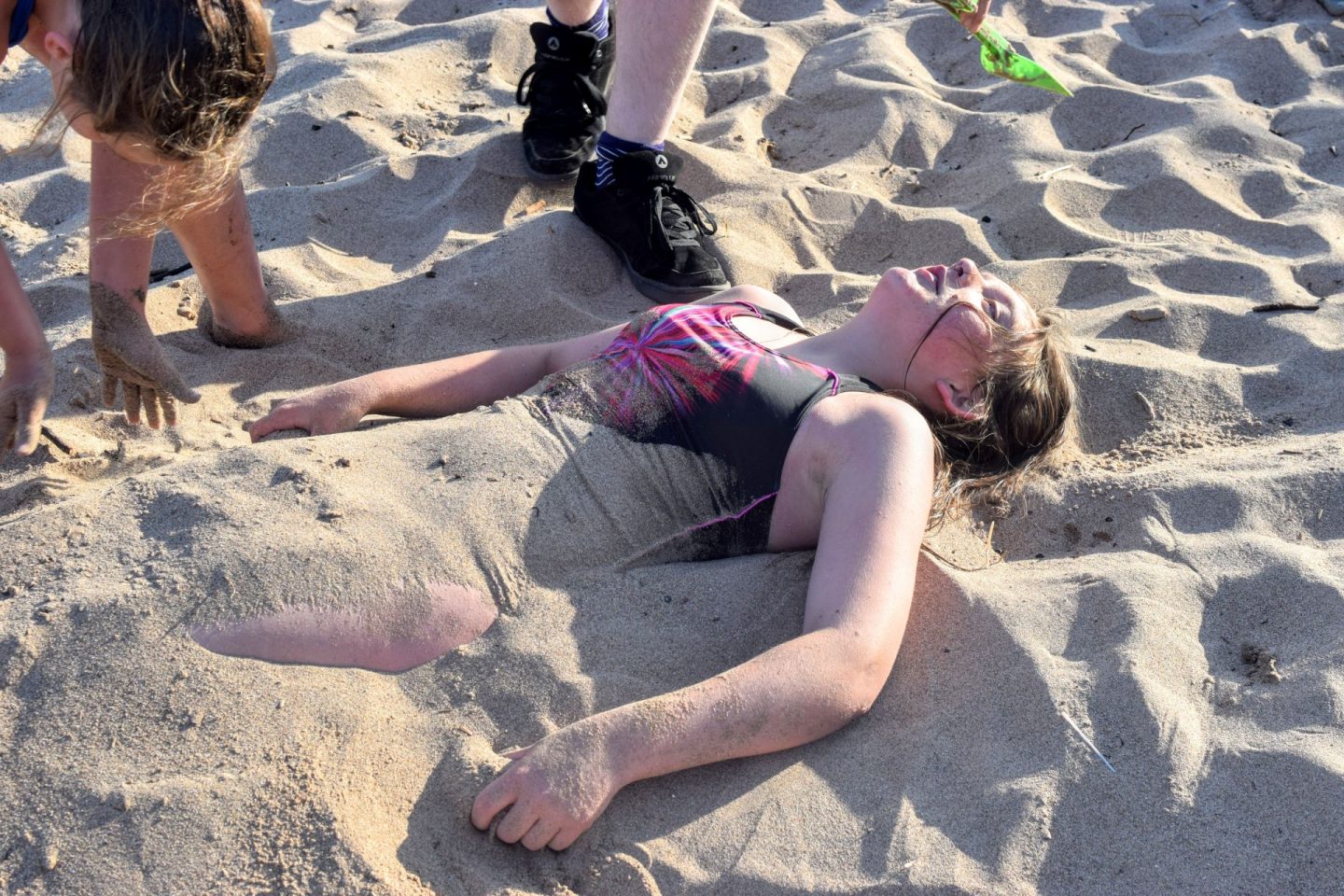 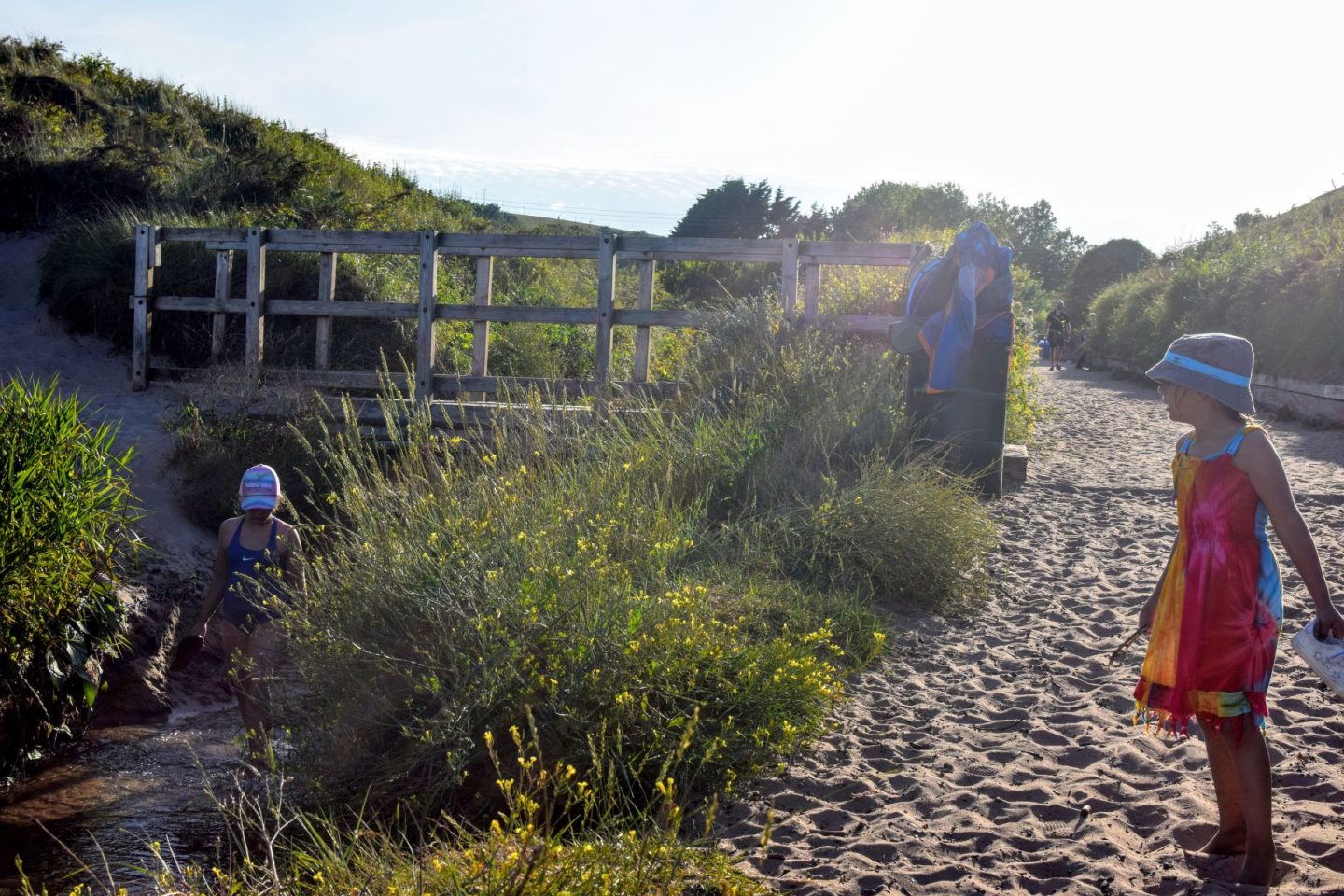 After a lovely day, we packed up and left the beach to go and pick Danny up and head home.  On the way back to the car the girls stood on the bridge and played Poohsticks. 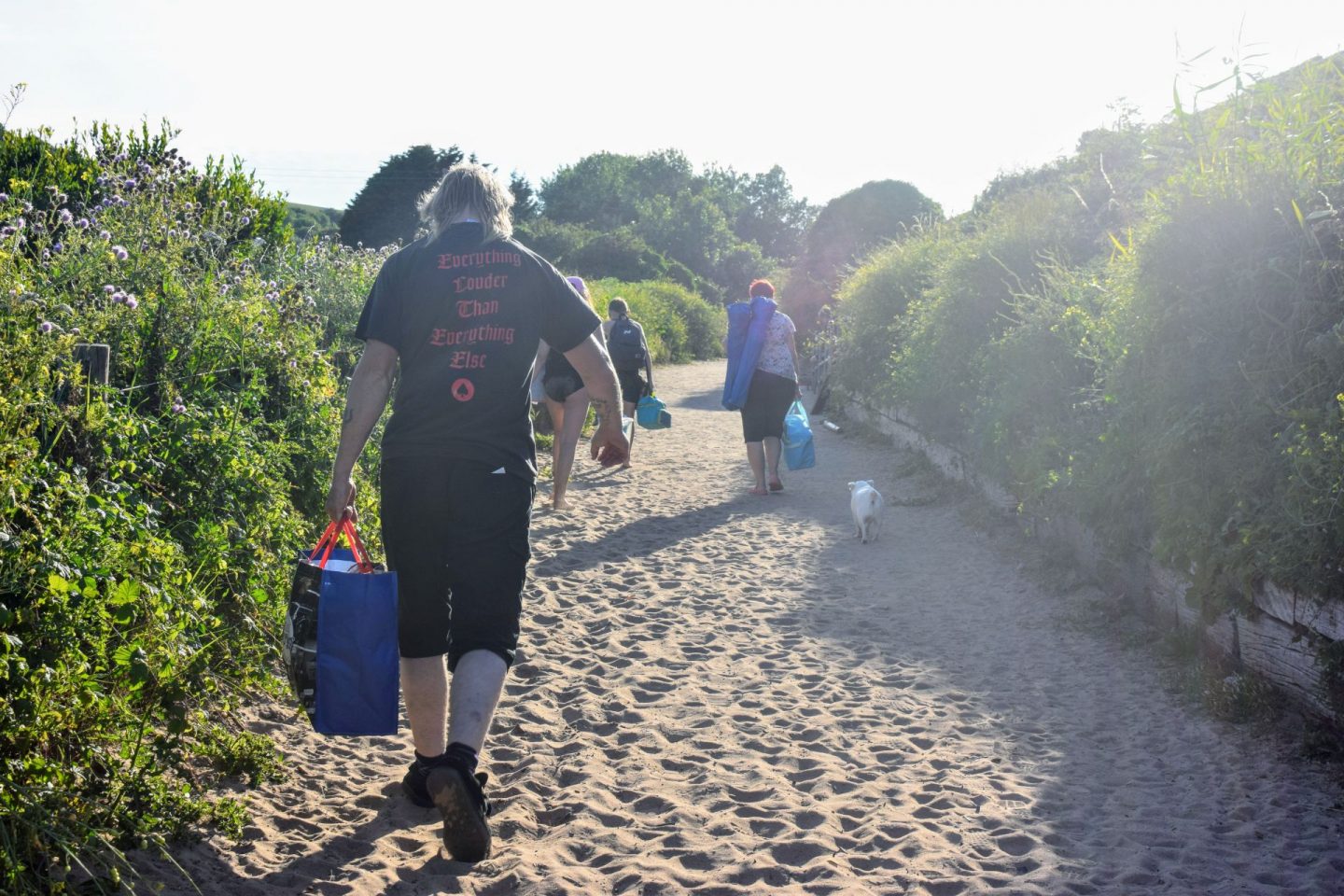 The sand-covered path reminds me of beaches in France, although the temperature is more bearable to walk on! 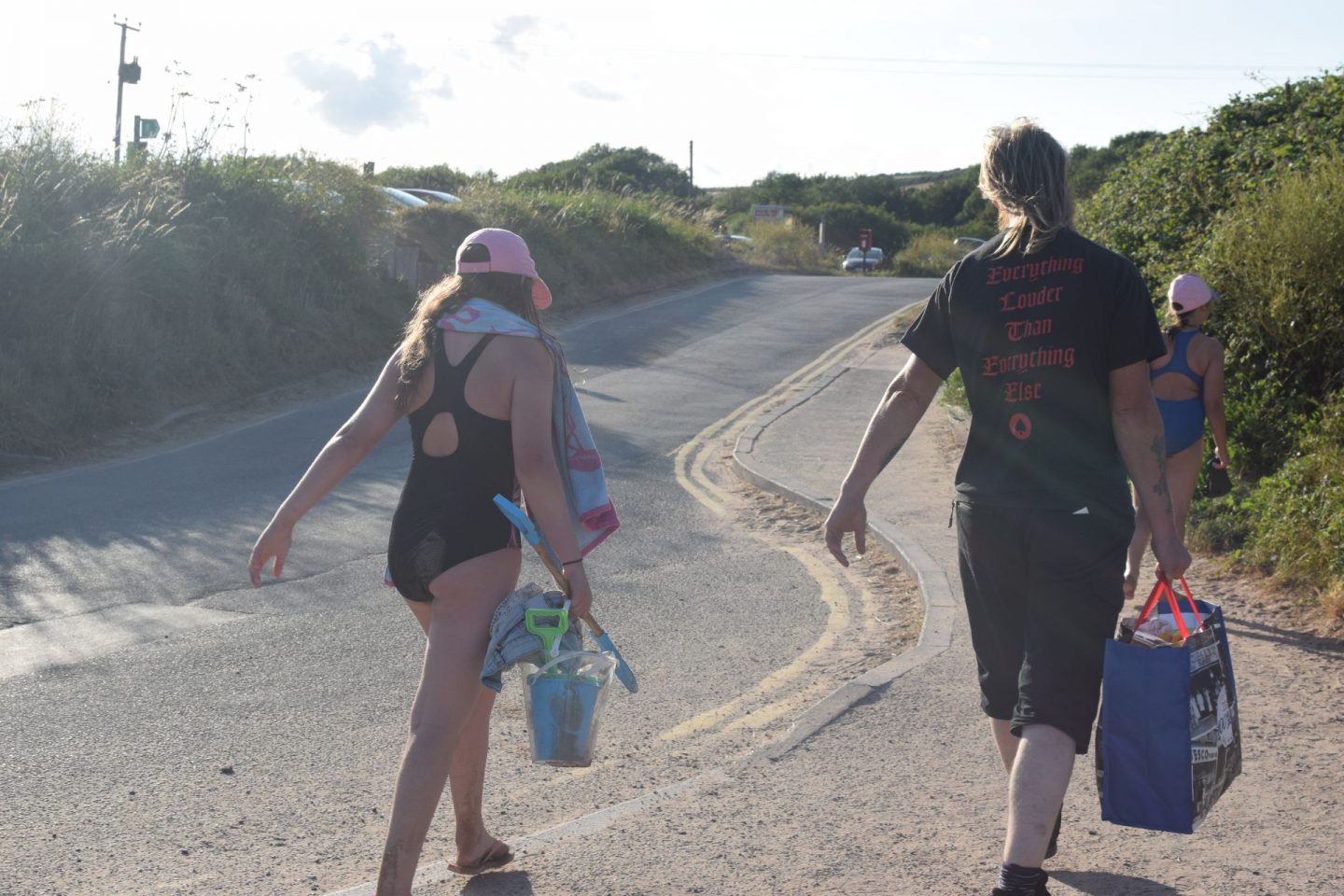 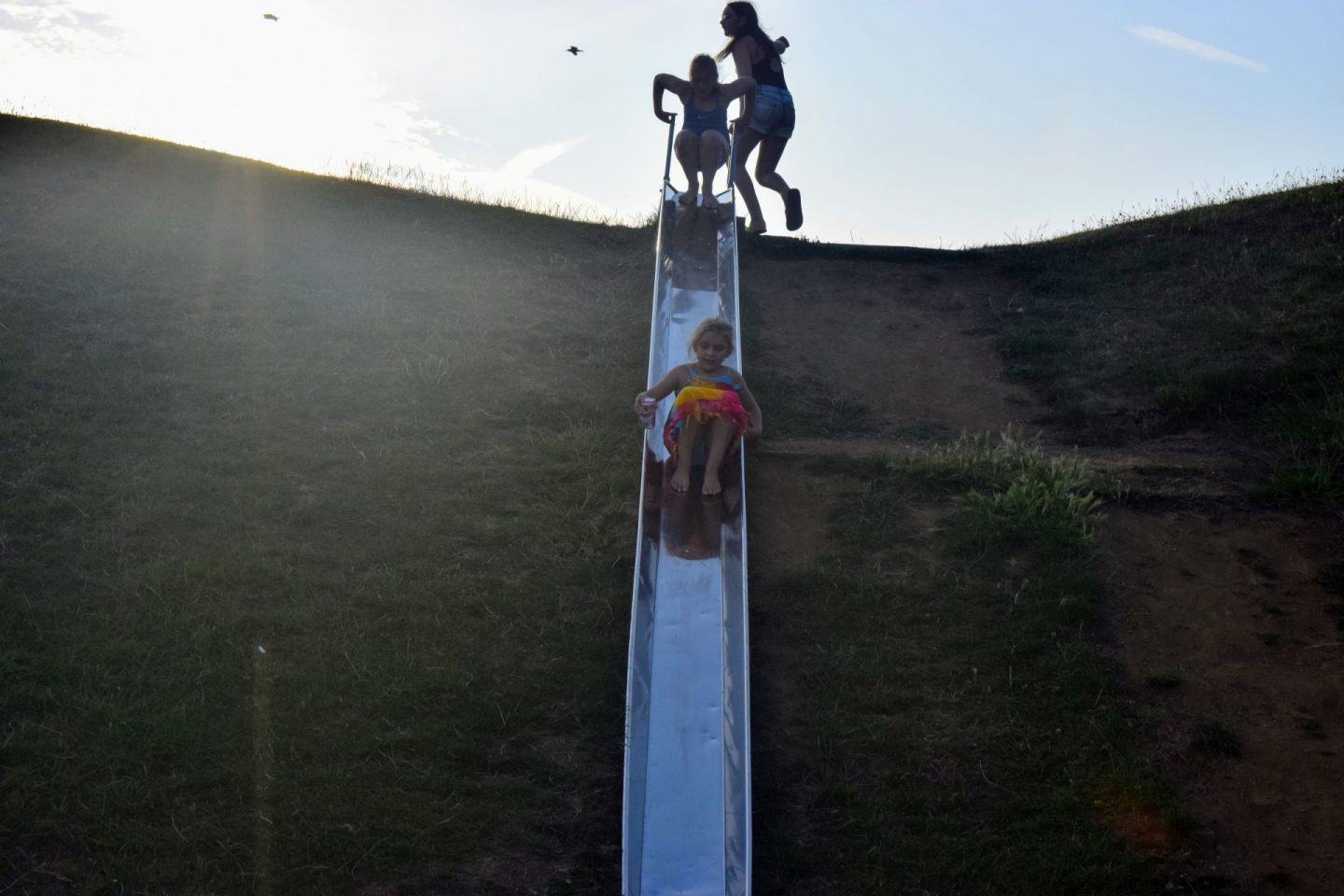 (and how we came to get a dog)

While driving home, we received a phone call from Danny.  He rang Dave’s phone so the girls and I could only hear half the phone call.  Unfortunately, there had been some tragic news (which I can’t go into as it’s not my story to tell).  But as a result of this tragic news, there was a dog who had nowhere to stay for the night.  Danny asked if we could look after him.  I heard Dave agreeing, yes we’d take him for the night.  As the girls guessed the gist of the conversation, they were so excited.  Danny needed to sort some things out so we were now too early to pick him up.  We headed to the nearest park to waste some time until he was ready. 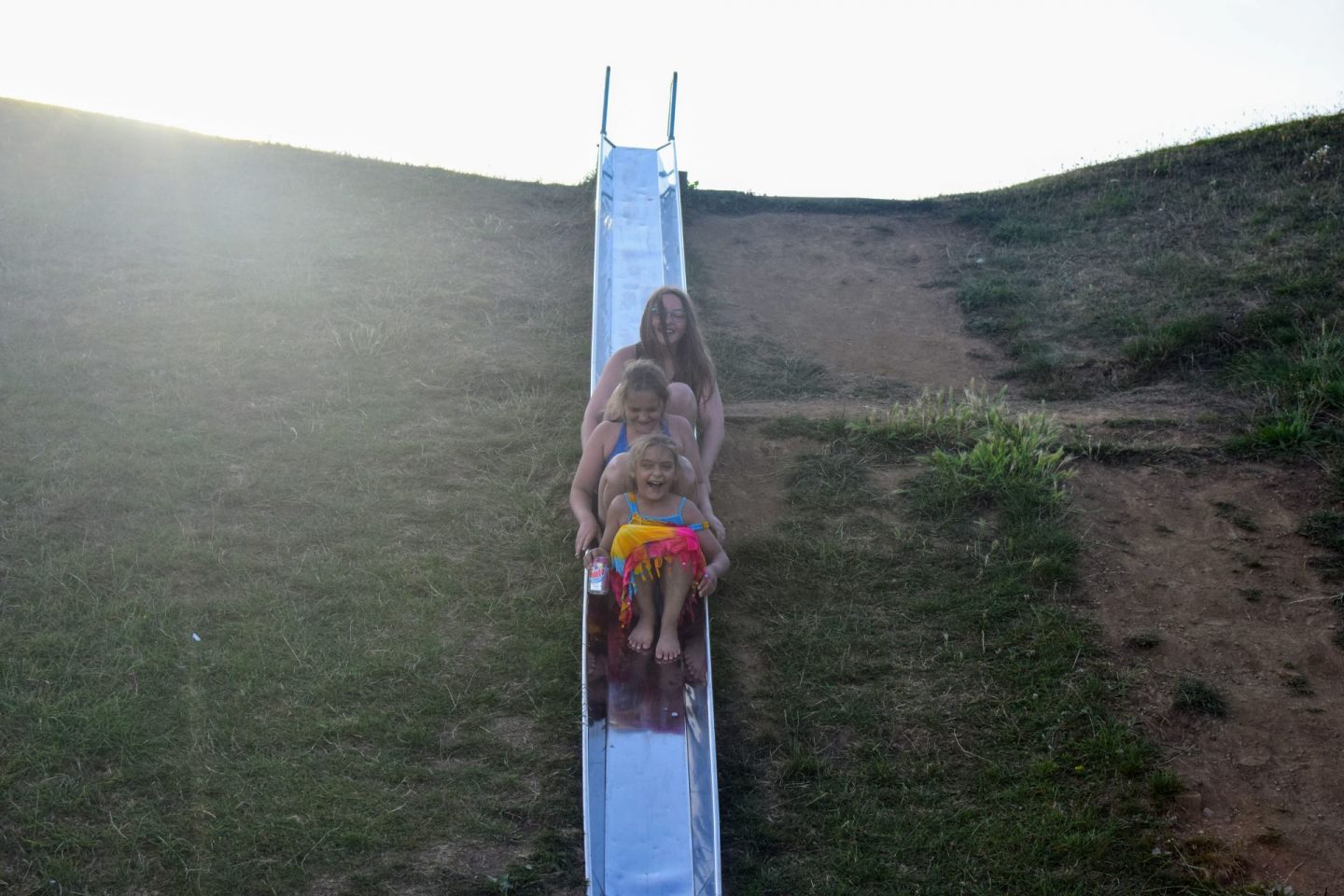 We’d been told that Sid, the Jack Russell was an old boy at 16 years of age.  He also has never liked other dogs (this is why others couldn’t take him in at this time).  As he was of an age for a dog we imagined he might be slow and tired.

The time came to collect Danny and Sid.  We greeted him and he got in the car happily.  When we got him home, Dave and I can remember him sort of limping into the living room and we both thought “Bless him, he’s old and arthritic.”  Anyway, he must have just hurt his leg at that time because after that moment he’s never ever limped again.  As you can imagine, once he was with us we couldn’t imagine him leaving.  We did warn the kids that family might come forward and want him but after his owner’s funeral had been and no one had expressed an interest and we had the blessing of the closest relatives, we knew he had found his forever home with us. 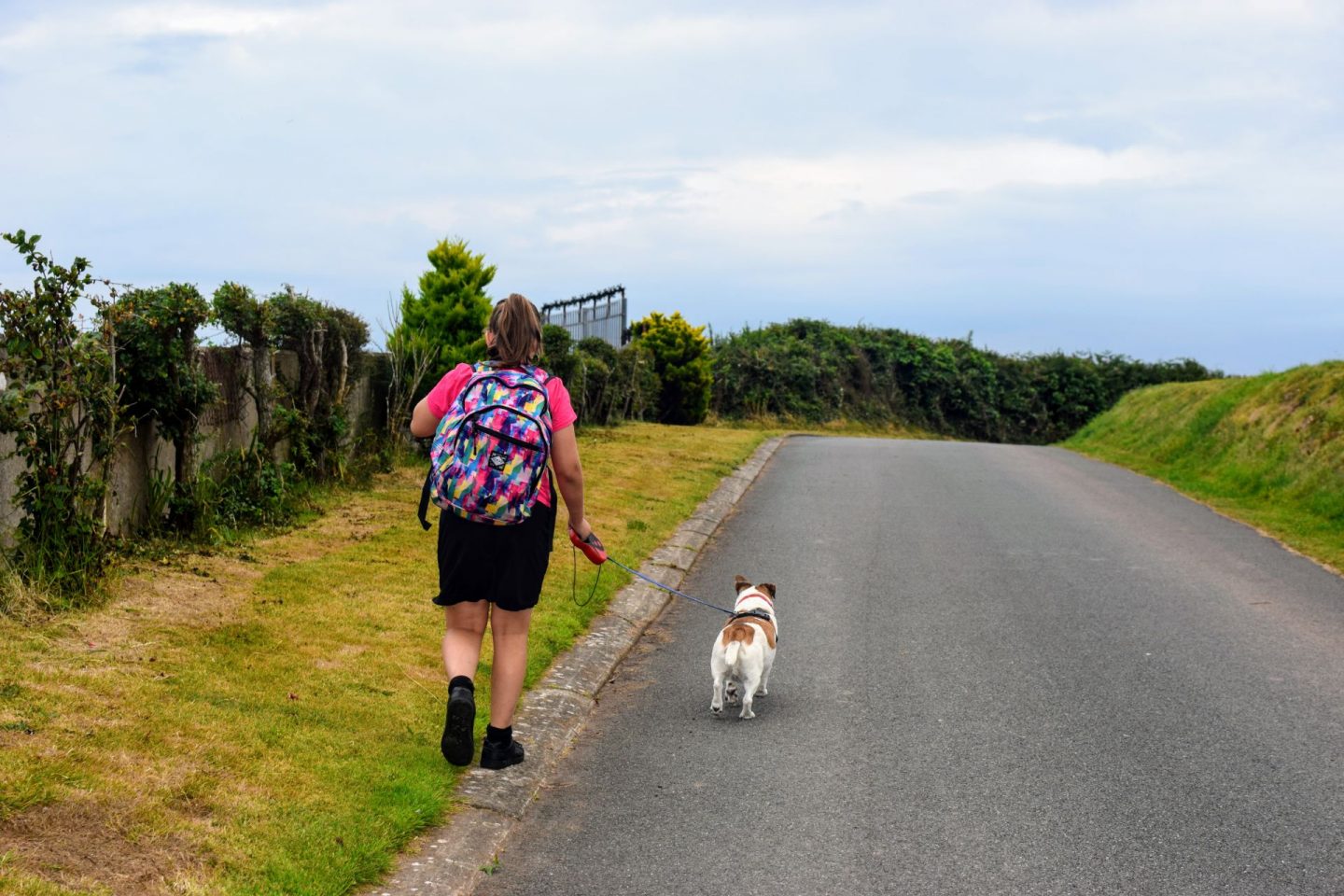 The day he arrived, we settled him in the house and garden.  The following day we took him for his first walk.  I imagined he’d be slow and get tired, but no, he’s still full of energy (granted not the jumping constantly energy of a younger, more excitable Jack Russell, which we wouldn’t have expected anyway).  As an older dog, the advantages are he was house trained and lovely with the kids.  On the negative side, he’s not trained and socialised as much as if we’d had him from a pup.  As I mentioned earlier, he doesn’t like other dogs, he still barks whenever he sees one.  The phrase, “You can’t teach an old dog new tricks” seems to be apt in this regard.  This means he gets along happily as long as we try to avoid other dogs as best we can, but he’ll never be the type of dog we let run loose on the beach as I’d pictured in my daydream the previous day. 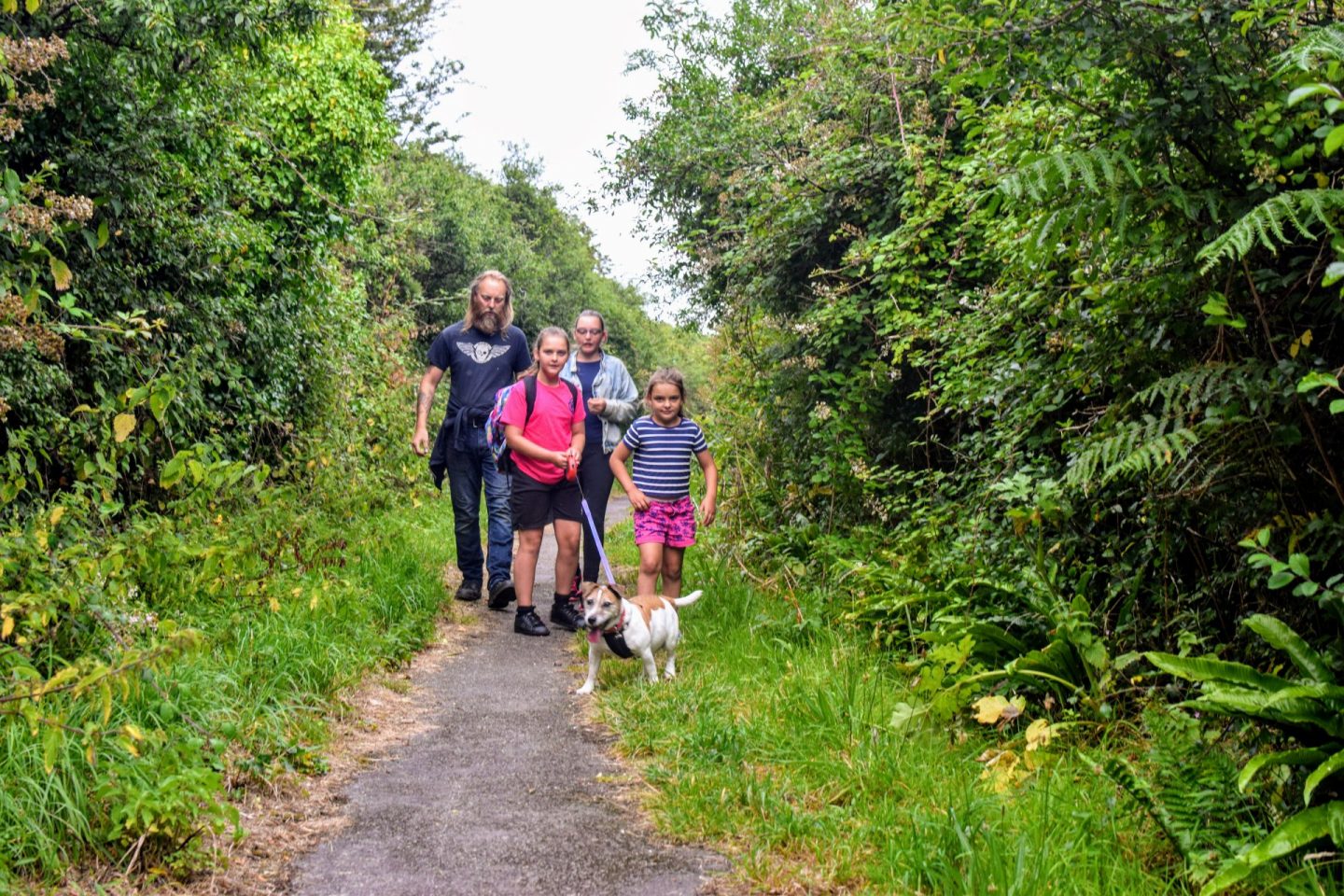