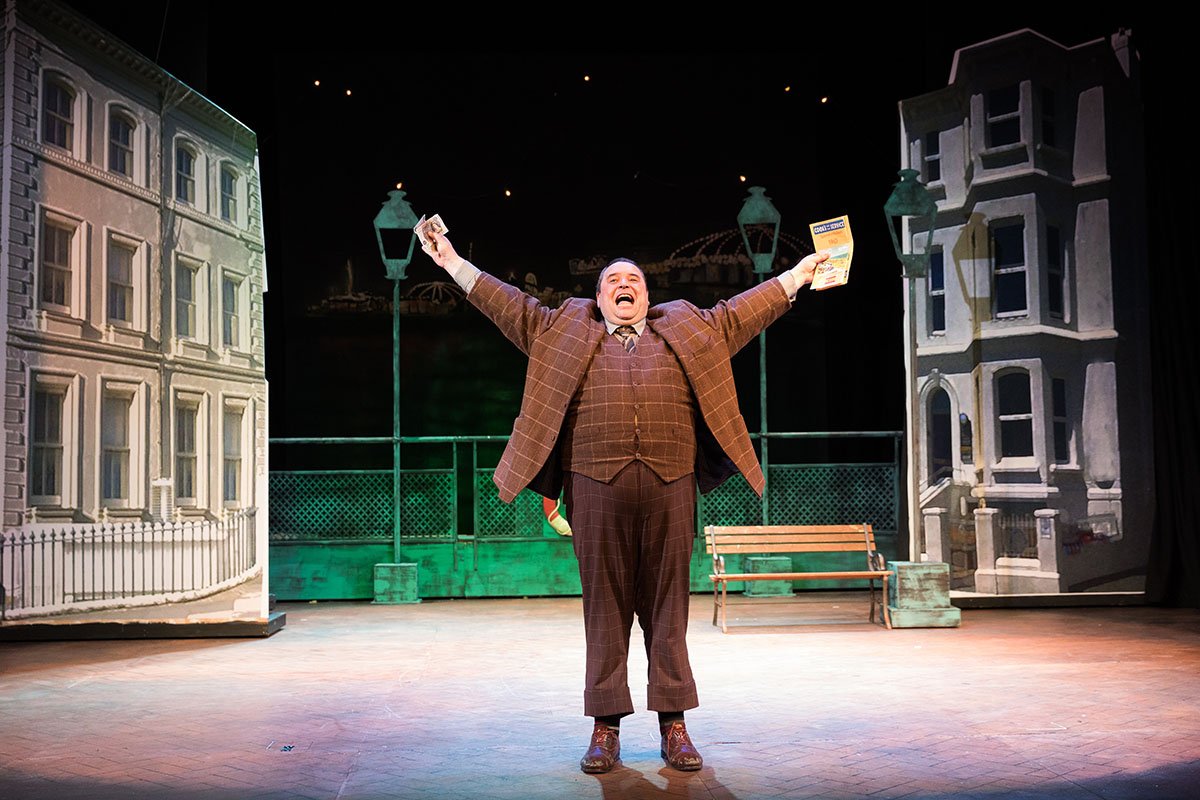 Press tickets were provided for purposes of this review

Friday evening was cold, wet and windy.  It was so tempting to stay indoors, cosy and sheltered from the weather.  But, we had other plans and off we headed into the dark to the press night of One Man, Two Guvnors, the Torch Theatre’s own production of this West End and Broadway Smash Hit play.  Last year, the run of this show was prematurely cancelled due to the lead actor sustaining an injury so I’m delighted that he is now recovered and One Man, Two Guvnors has returned for the theatre’s Autumn 2019 season- the show must go on! 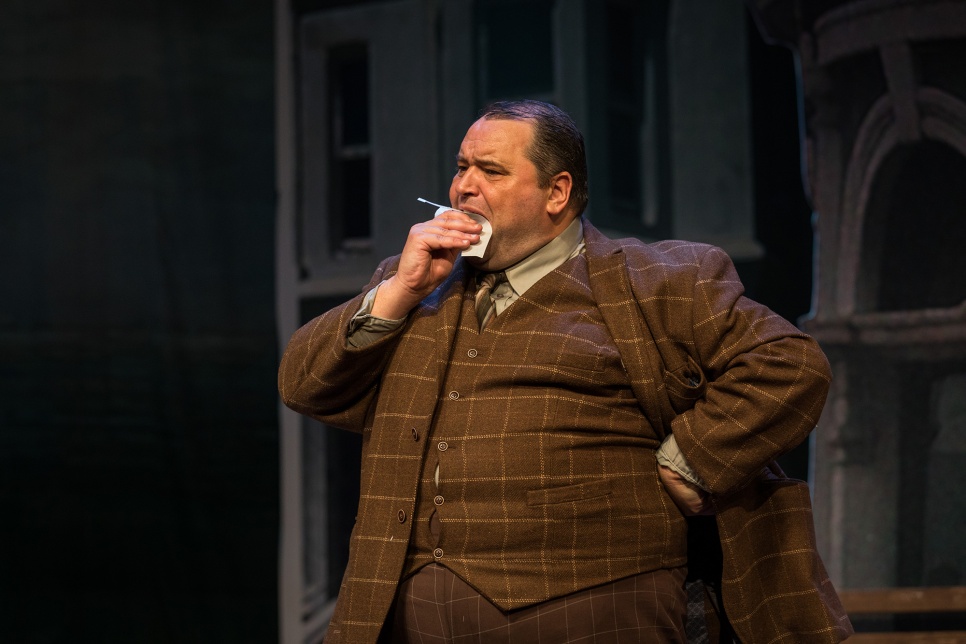 Fired from his skiffle band, Francis Henshall becomes minder to Roscoe Crabbe, a small time East End hood, now in Brighton to collect £6,000 from his fiancée’s dad. But Roscoe is really his sister Rachel posing as her own dead brother, who’s been killed by her boyfriend Stanley Stubbers.

Holed up at The Cricketers’ Arms, the permanently ravenous Francis spots the chance of an extra meal ticket and takes a second job with one Stanley Stubbers, who is hiding from the police and waiting to be re-united with Rachel. To prevent discovery, Francis must keep his two guvnors apart. Simple.

A hilarious mix of songs, slapstick and one-liners, One Man Two Guvnors is British comedy at its best!

One Man, Two Guvnors has hints of  a Shakespeare tragicomedy with it’s gender play and near fatal end to our star crossed lovers.  In fact it’s an English adaption of A Servant of Two masters, a 1743 Commedia dell’arte style comedy play by the Italian playwright Carolo Goldoni.   In it’s current form, the play opened at the National Theatre in 2011, toured in the UK and then opened in the West End in November 2011, with a subsequent Broadway opening in April 2012. The play won numerous Olivier and Tony Awards and has since toured much of the Western World. One Man Two Guvnors  has been seen by over 1 million people worldwide, with the West End production earning five-star reviews from every London newspaper, making it the most successful theatre comedy of the past fifty years. 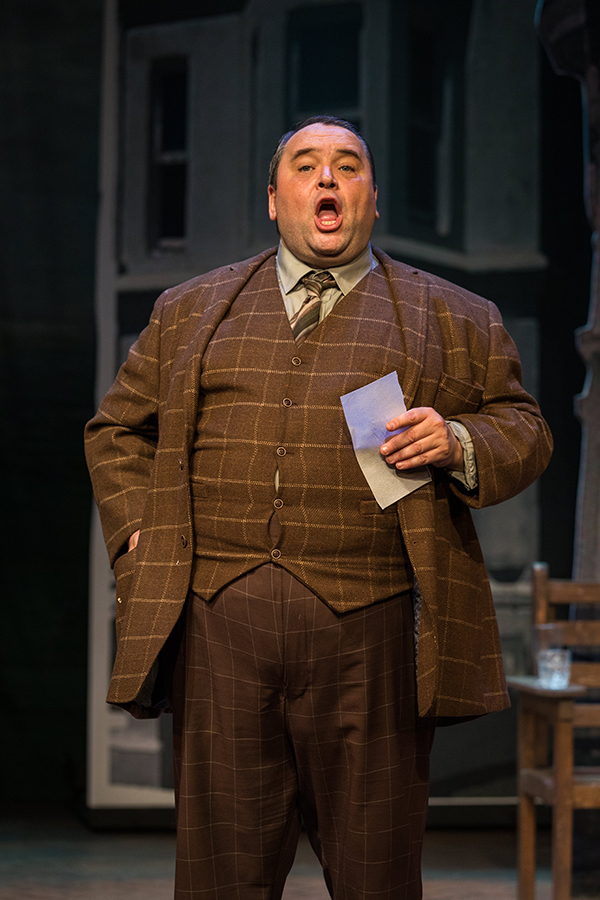 In One Man, Two Guvnors Brighton replaces Italy and the play opens in retired gangster Charlie “The Duck” Clench’s living room in 1963.  Everyone is gathered to celebrate the happy occasion of  dim witted Pauline’s engagement party to Alan Dangle, a flamboyant amateur (lovey, darling!) ac-tor.  There are a lot of characters and plot-lines to introduce in this beginning scene and the cast manage this superbly.  We soon get to know each of their louder than life almost caricature personalities and learn that this party was originally intended to mark the betrothal of Pauline and her first intended,  gay gangster, Roscoe Crabbe.  Roscoe Crabbe is now dead (or is he?) but they couldn’t let the sausage rolls go to waste so it looks like Pauline will get to marry her true love instead. 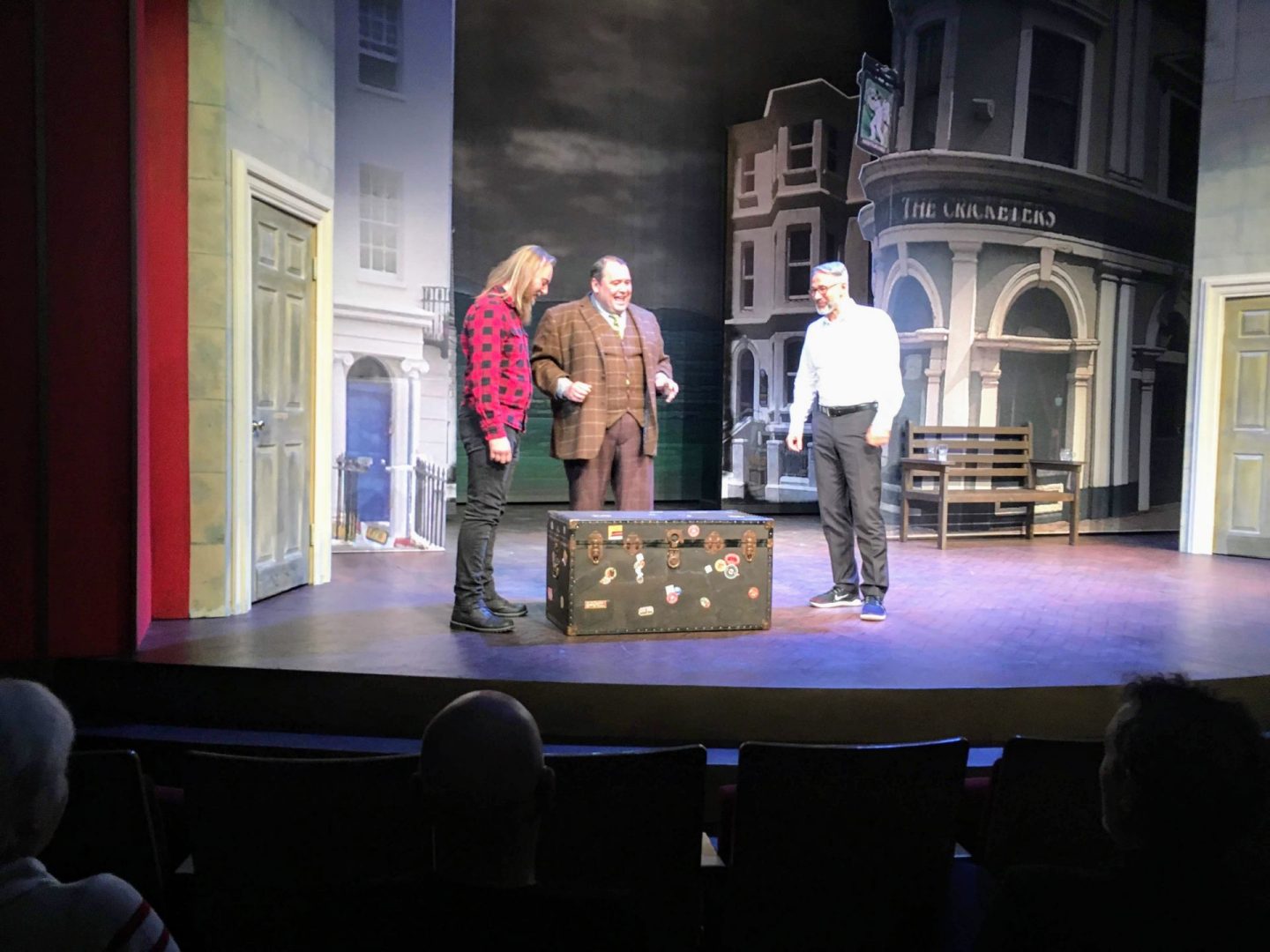 If that wasn’t complicated enough, our leading man, Francis Henshall, played brilliantly by Christian Patterson, arrives on stage to add to the chaos when he informs the party that Roscoe Crabbe is in fact alive (ooh!).  Patterson is hilarious and really involves the audience by repeatedly breaking the fourth wall.  There’s a lot of ad lib and interaction between the theatregoers (some are more involved than others- see picture above!) which makes this a really warm and welcoming show.  The title begins to make sense when the perpetually hungry Francis finds a way to make more money (meaning more food!) by having two Guvnors!  Of course, looking after both Roscoe Crabbe (who is actually Rachel Crabbe, his twin sister- are you still with me?) and Stanley Stubbers (Rachel’s boyfriend and her brother’s murderer) is never going to be easy and so the fun of the play begins…

I’ve already mentioned the wonderful Christian Patterson as Francis Henshall, the “one man”.  He describes his character as a “lovable buffoon” words that have also been used to describe the actor himself apparently!  There’s no doubt that it must take a lot of dedication, rehearsal and talent to make this show appear as effortlessly riotous as he achieves.  His “guvnors” are played by Emma Mulkern and James Mack.  Emma Mulkern stepped up to the bar playing both roles of Roscoe and Rachel Crabbe flawlessly.  Her Roscoe was tough with confident cockney swagger but she easily made the switch back to Rachel, showing her gentle, more vulnerable side to her lover Stanley Stubbers and sharing feminine solidarity and friendship when she reveals her true self to Pauline.  James Mack was hilarious as the posh public school boy hoodlum with unique sayings such as, “Buzz wham!” and “Country life!”.  He is basically an arrogant twit but somehow endears himself to us so much we forget to even consider why he murdered his girlfriend’s twin brother in the first place.

Pauline is played by Miriam O’Brien, who I had the pleasure of watching in the title roles- Sleeping Beauty and The Woman in Black.  She portrays Pauline’s wide eyed innocence perfectly and I loved her 60s cockney accent.  Pauline’s father, retired henchman, Charlie Clench is played  by Marcus Knibbs (who doubles up playing Gareth the waiter too).  He gets the East End gruffness just right.  George Naylor must have great fun playing the over exaggerated Alan Dangle.  His acting skills are so good they are (intentionally!) bad! Torch Theatre Pantomime regular, Dion Davies, is almost unrecognisable (without his “Dame” clothes!) on as Harry Dangle, George’s dad and Clench’s Latin speaking solicitor).   Clench’s book keeper, and Roscoe’s love interest, the feisty, feminist Dolly is played by Sarah Annis.  Her optimistic speech about hopes for the future (think female Prime Ministers and Britain “joining Europe) is hilarious  especially with the audiences benefit of hindsight.  The play relies on the audience being (seemingly) more knowledgeable than the characters.  Lloyd Boateng is the laid-back chef and owner of the Cricketers’ Arms.  Last but certainly not least Peter Doran, director, takes to the stage as shaky octogenarian, Alfie during his first day (yes, you read that correctly) as a waiter in side-splittingly funny scenes.  I cannot call this a cameo as his scene stealing physical comedy has the audience in hysterics.  His prat falls are perfectly timed and oh so painfully (certainly to Alfie!) funny.  I actually keep replaying one of his stunts over and over in my mind and I need to ask, has anyone seen Peter Doran since the show- is he okay?*  How does he do it?  Is he constantly covered in bruises? 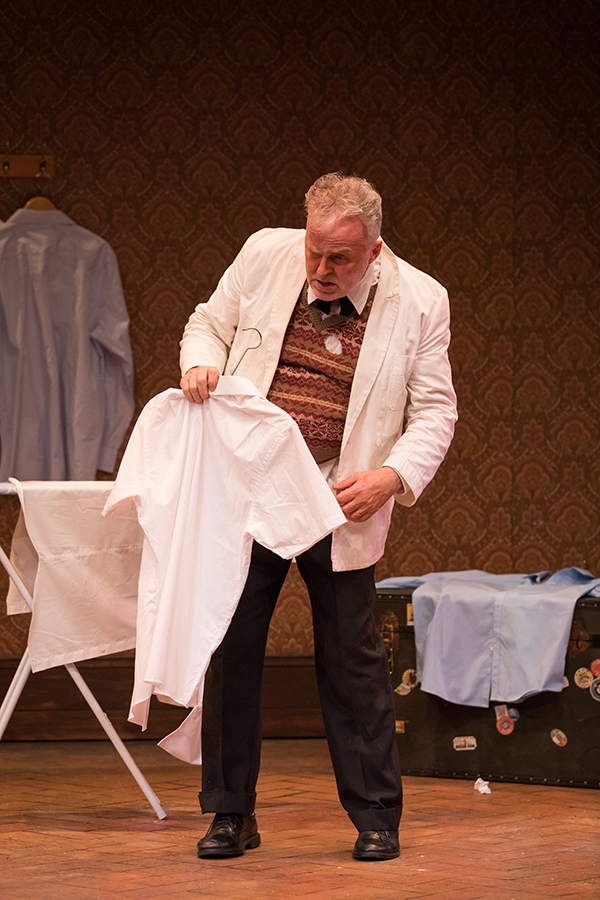 In between each scene we were treated to lively, toe tapping, skiffle style music played by musical director Lloyd Grayshon and Jerome Davies, joined by various cast members as the night progressed.  This was such a great way to further set the period in the 60s (as well as to hide the set changes taking place behind the scenes).  From the start of each song the smile on my face was mirroring the wide intentionally cheesy smiles of the performers on stage.

The sets designed by Sean Crowley evoke the era of the 60’s.  We, the audience are taken from Clench’s wallpapered living room to The Cricketers Arms (exterior and interior) and to Brighton Pier.  Even the set is not except from a joke or too such as Francis pointing out the “small door” that creates the sets forced perspective.

I’d heard (from the posters) that the show was going to be funny but it truly exceeded my expectations. One man, Two Guvnors is just the sunshine we  all need to brighten up our lives at this time of year, particularly during this political climate- it was well worth leaving the comfort of our home to come and watch.  From the start of the show audience members were turning to the people next to them and laughing together.  By the end of Act 1, once strangers were now friends and over heard to be saying, “Did that really happen?!”, “I’ve never seen anything like it!” and “It’s sooo funny!”.  It really is a feelgood romp that will make your belly hurt from laughing!  There were jokes and gags from start to finish but one particular scene was a cross between Fawlty Towers and Victoria Woods “Waitress”(Two Soups) sketch.  Torch Theatre artistic director Peter Doran (Alfie) said: “It’s one of those shows that everyone should see – probably the funniest thing to hit the British stage in the last 25 years.” The show left us in such good spirits, it was a wonderful night out, thoroughly entertaining-  I wholeheartedly recommend!

One Man, Two Guvnors is currently playing at the Torch Theatre until Saturday 16th November. 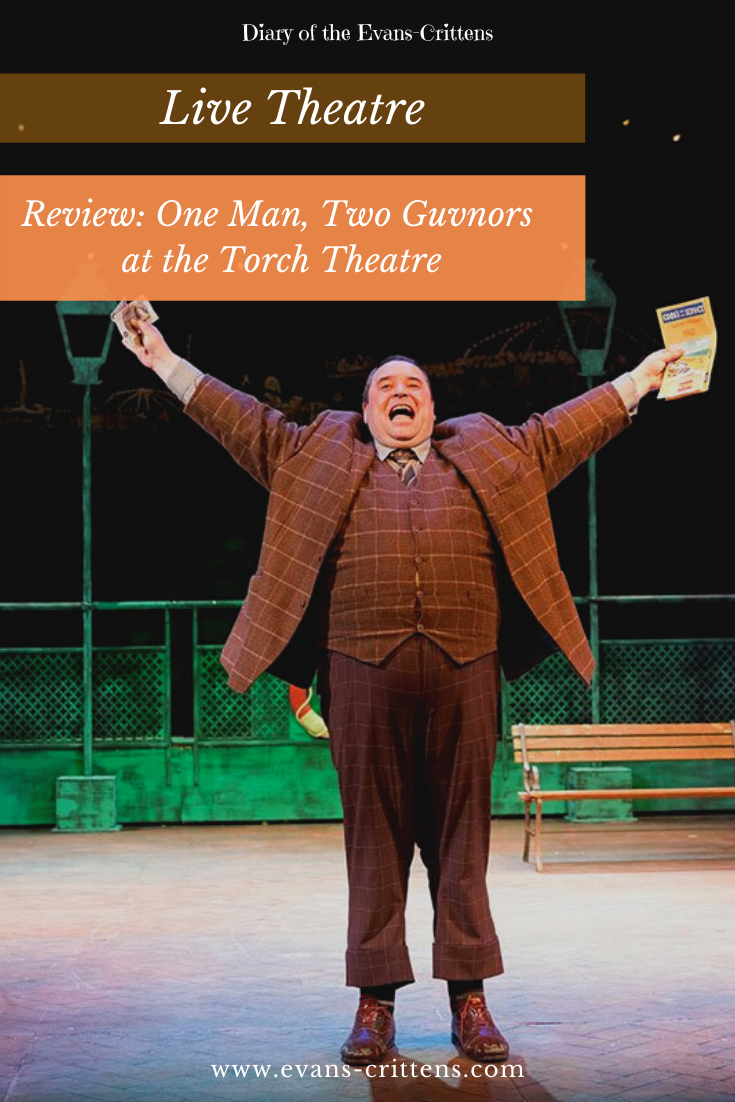 *You will be relieved to know Alfie AKA Peter Doran is alive and well and still performing hilariously in One Man, Two Guvnors