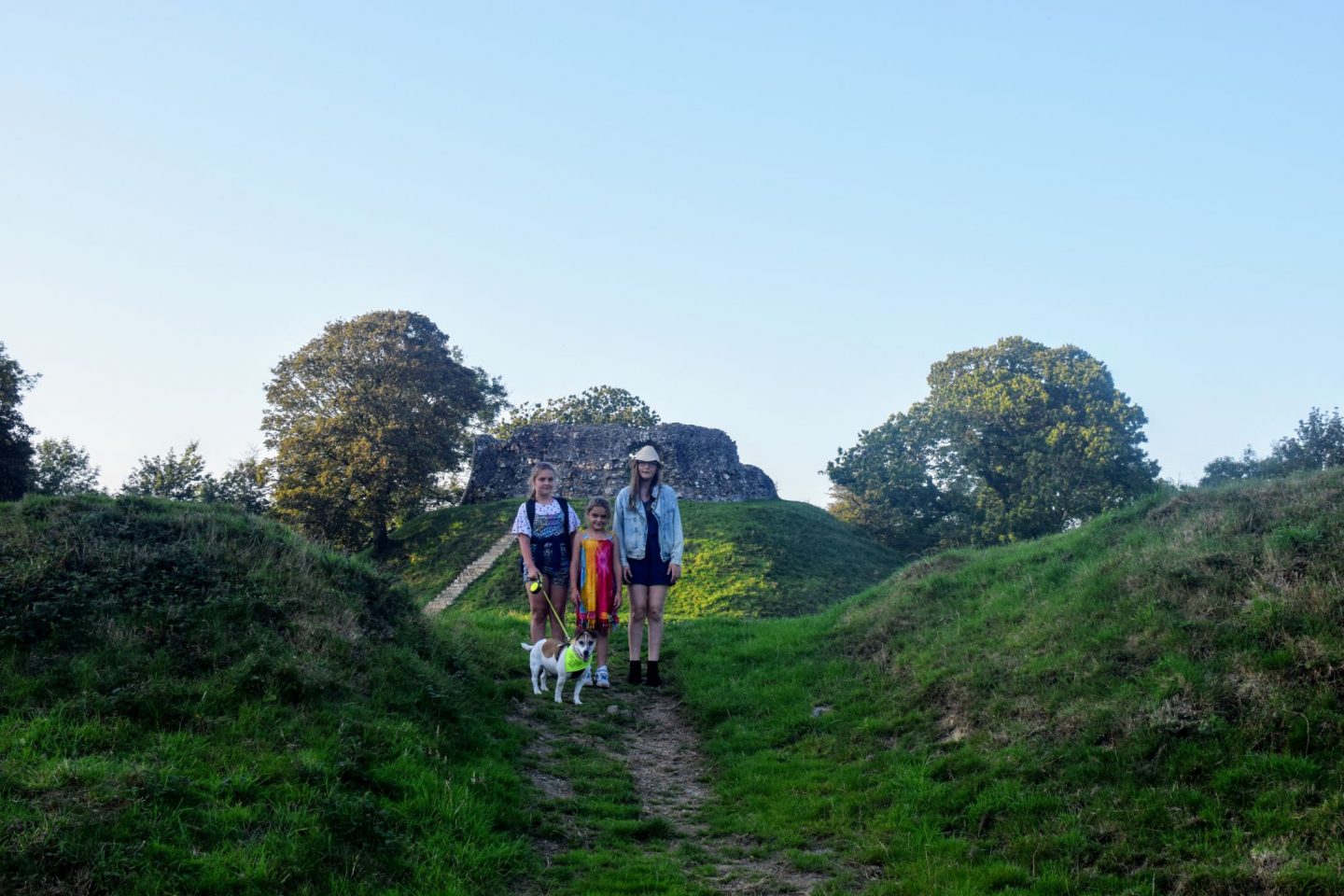 Wales has more castles per square mile than any other country in Europe and Pembrokeshire is lucky to have it’s fair share of castles to visit and explore.  We love spending long days out at the “big” castles such as Pembroke, Carew and Manorbier Castle.  The smaller castles are also great to pop to for shorter adventures or an evening walk.  We recently visited Wiston Castle.  Wiston Castle is said to be one of the most well preserved motte and bailey castles in Wales. 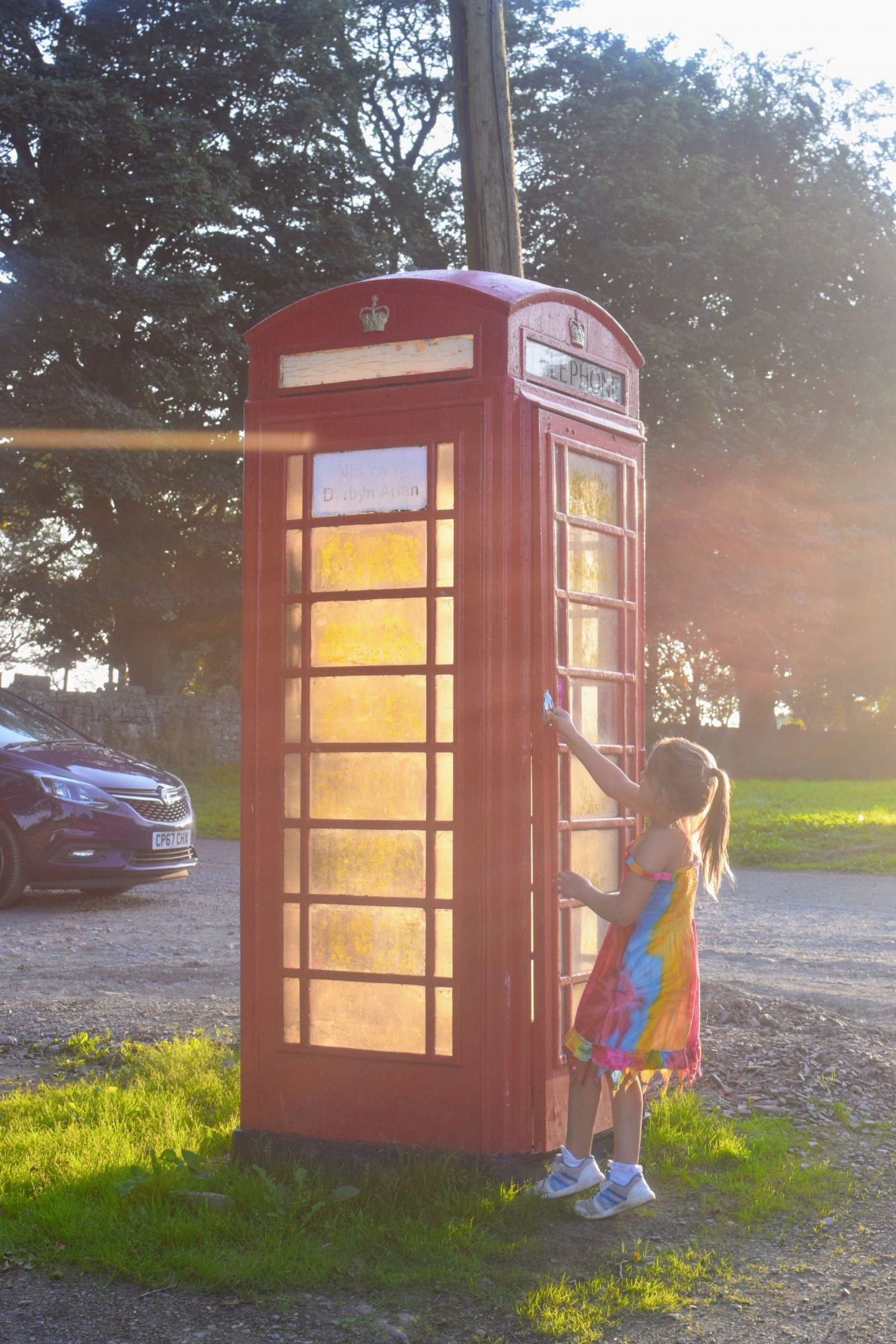 Wiston  (Sat Nav Postcode: SA62 4PN) is a village located six miles outside of Haverfordwest.  We travelled along  the A40 towards Carmarthen and followed directions to Wiston.  We parked just opposite the castle, outside the church.  Look out for the working old red telephone box located in the small  free car park. 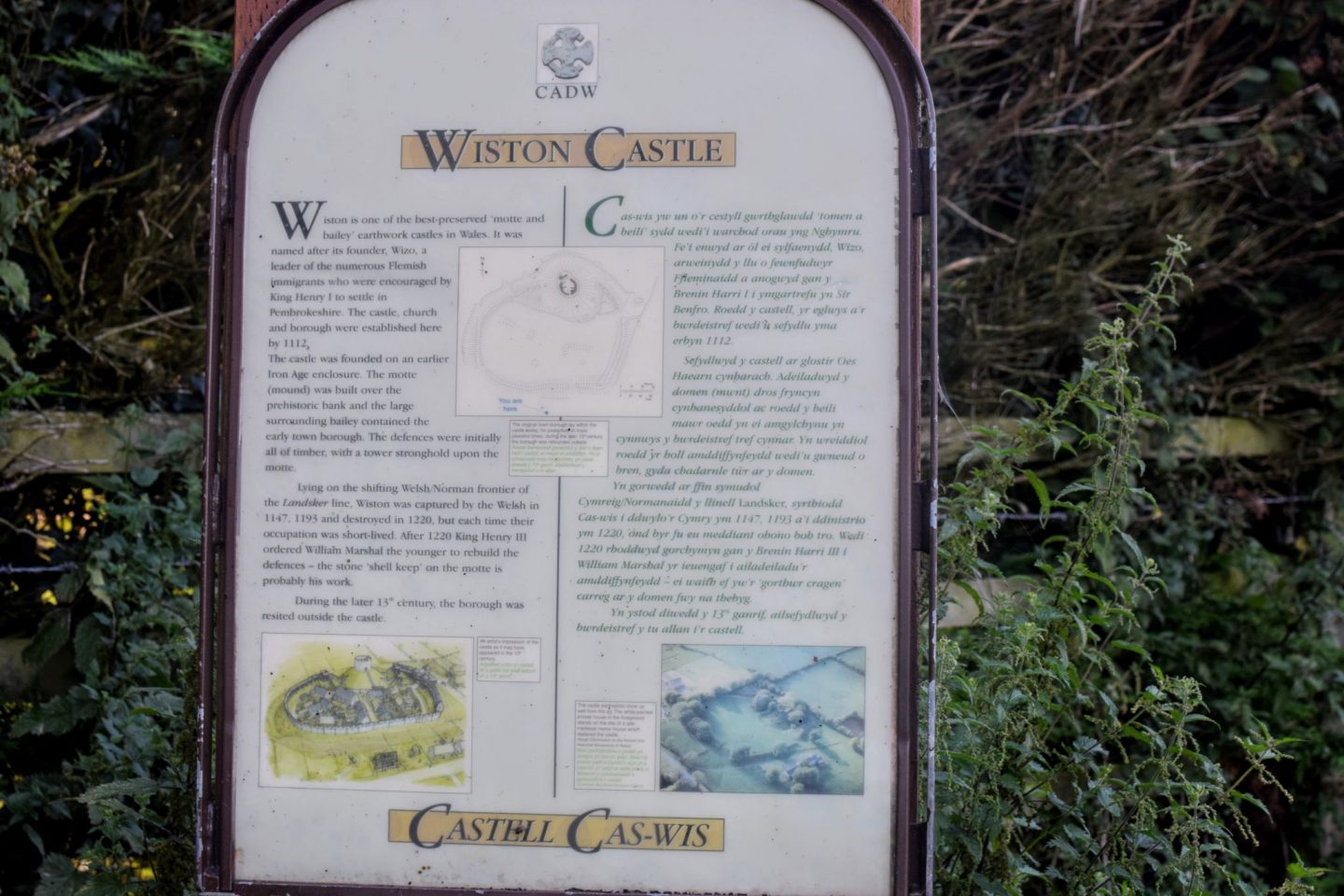 Wiston Castle is now looked after by Cadw.  It’s open all year around (apart from 24, 25, 26 December and 1 January).  A sign states it’s opening hours are between 10am – 4pm but it is usually accessible at any time.  It’s free to visit. 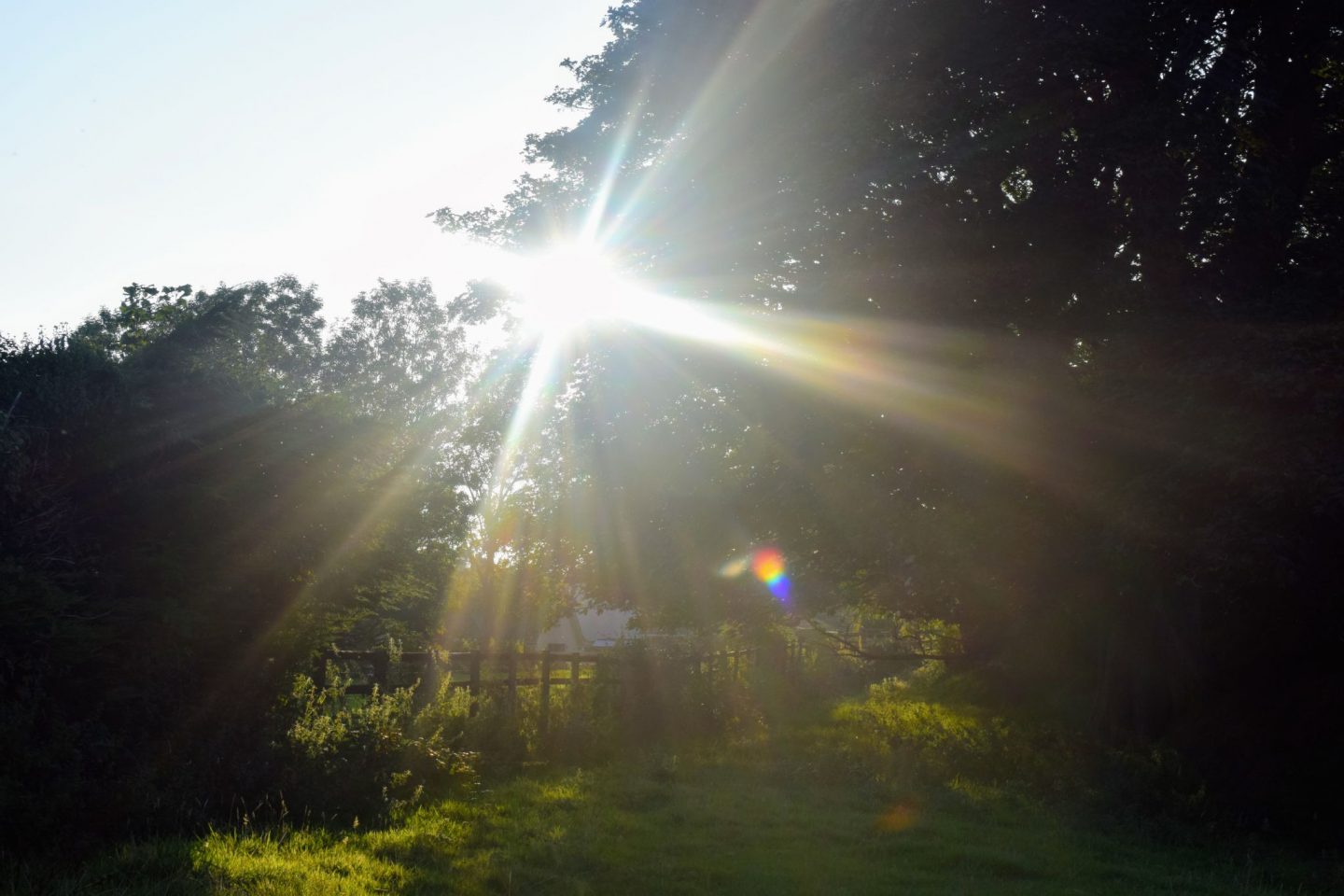 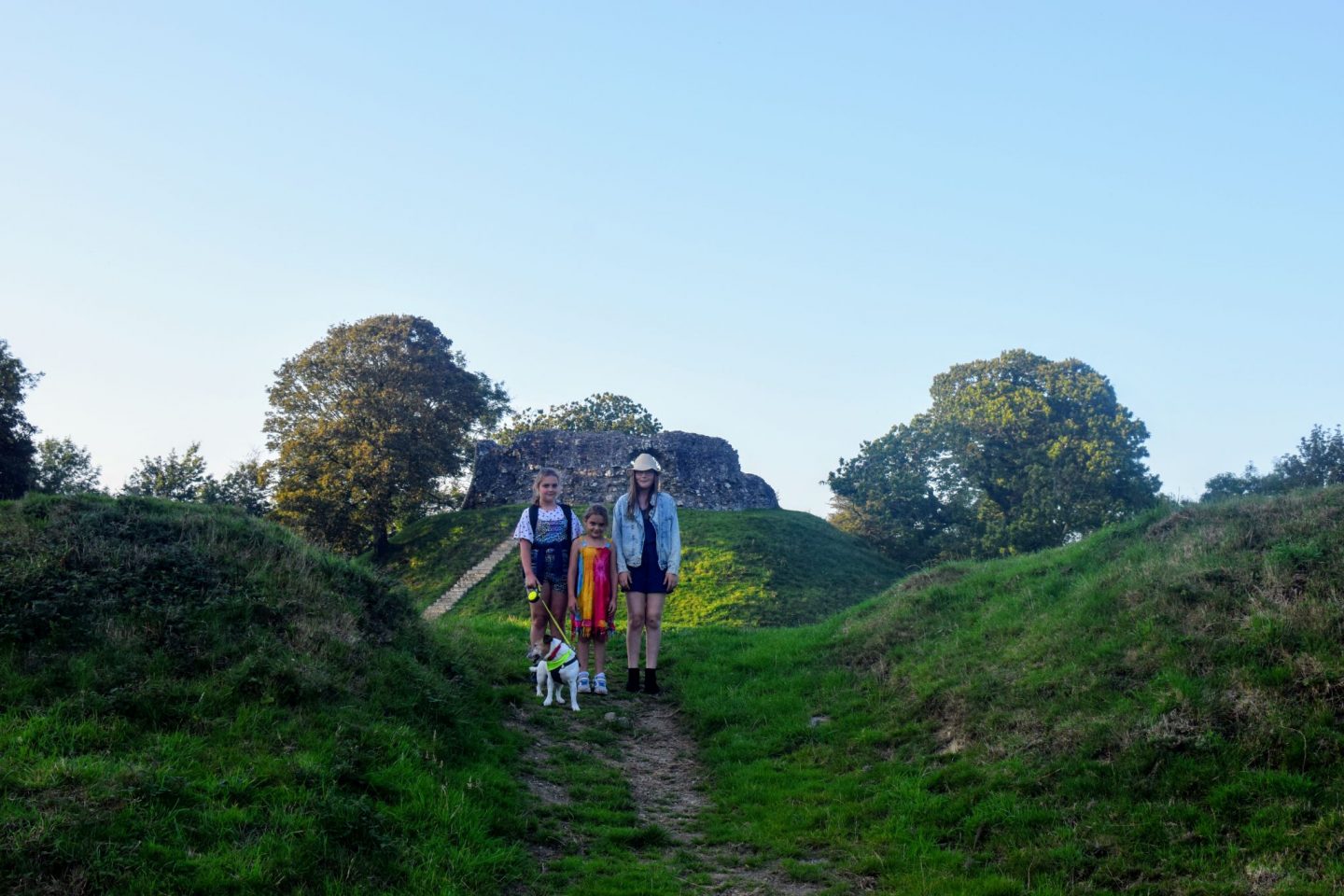 We entered the kissing gate and walked across the field.  This is actually private farming land so look out for cattle.  During our visit the only evidence of them was the cow pat dotted around the field. 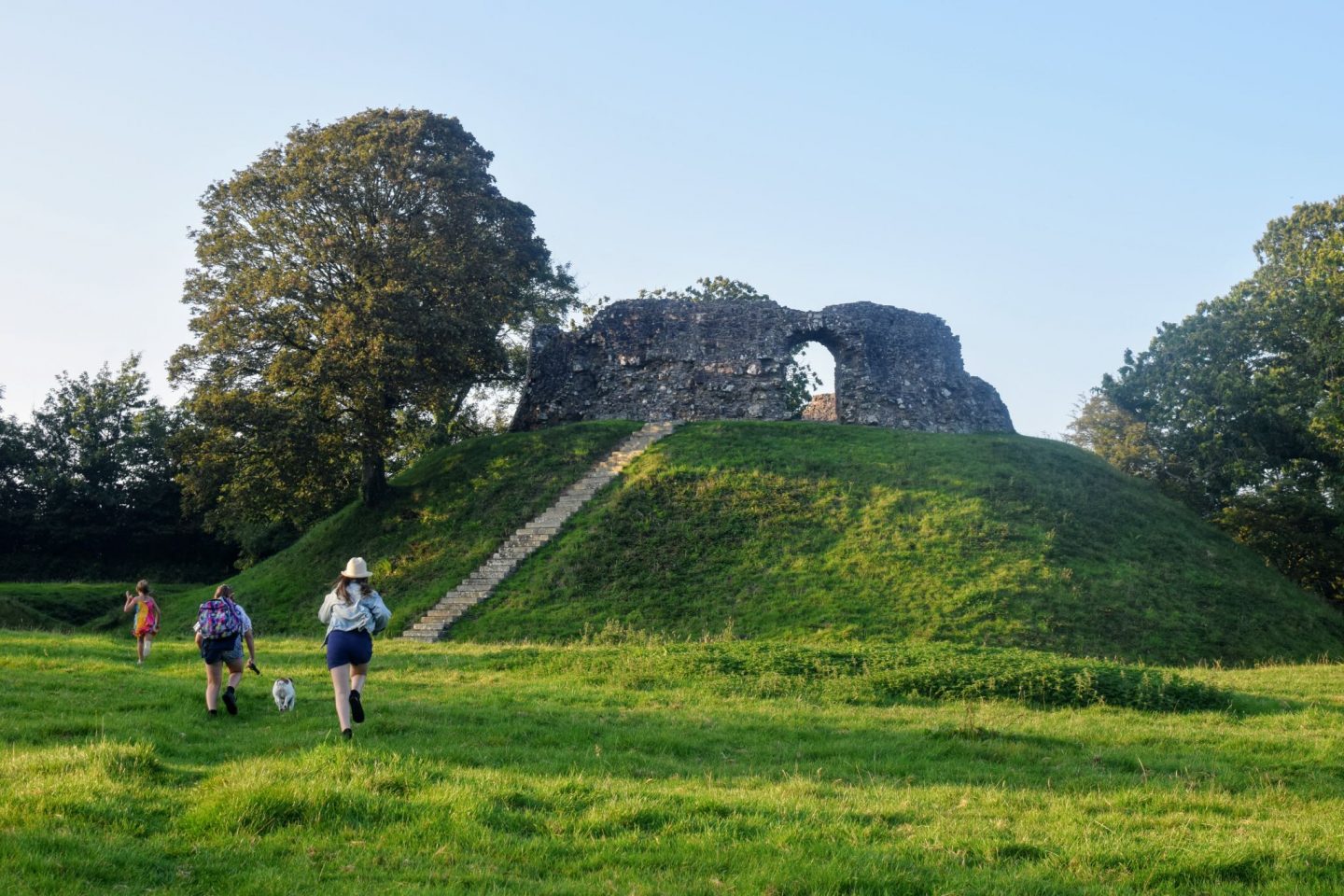 Wiston castle and village were founded by Wizo, a Flemish settler who was granted the land by Henry I of England after he had wrested control from the previous owner, Arnulf de Montgomery (who was in revolt against Henry). The castle was captured by the Welsh on several occasions but on each occasion it was retaken. It was abandoned during the thirteenth century when the then owner, Sir John Wogan, moved to nearby Picton Castle. 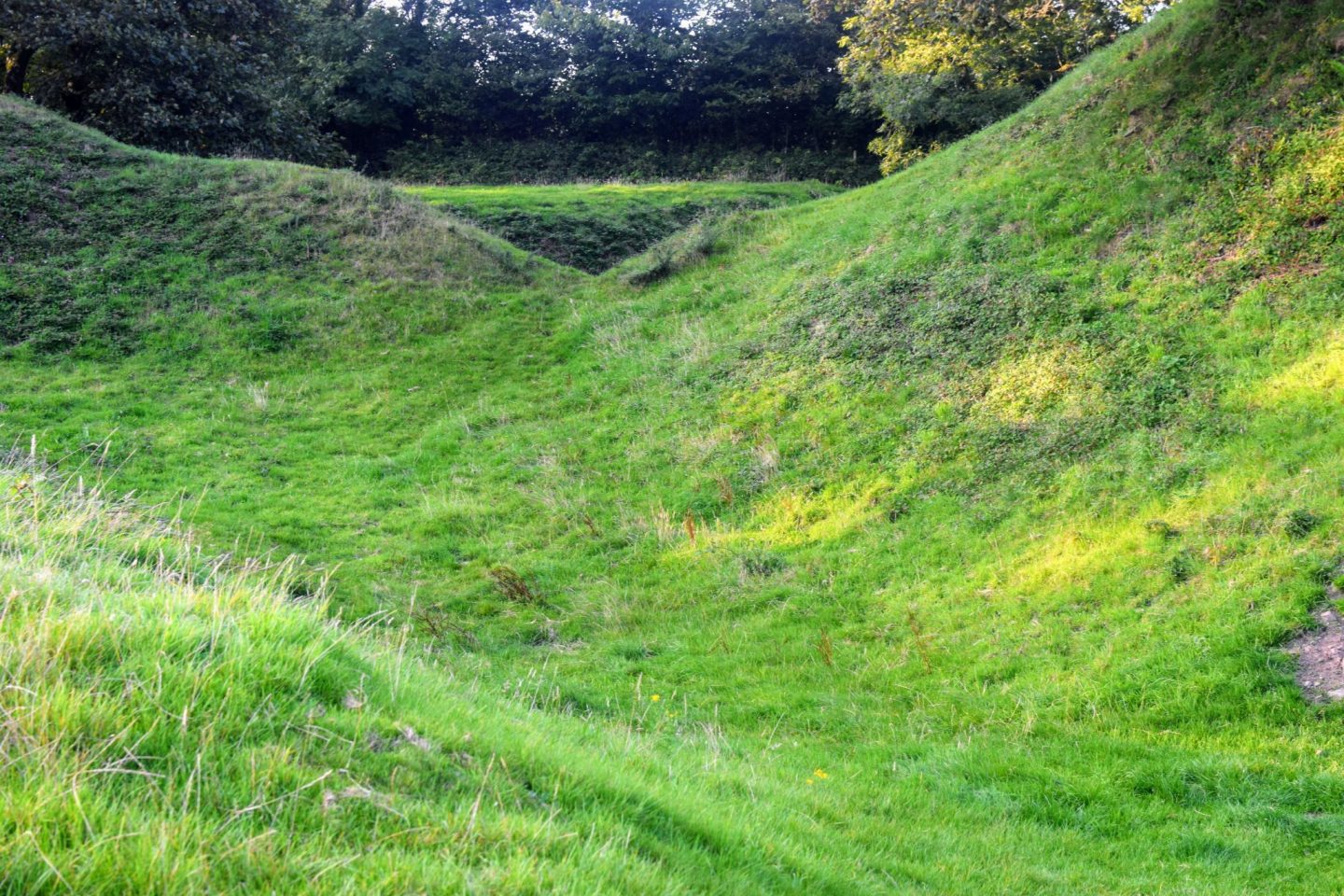 It is built on the summit of a hill to the north of Wiston with the motte about 9 m (30 ft) above the base of the ditch. Surrounding the flat top there is a shell-keep that would have been the main fortification inside which all the buildings, mostly made of timber, would have been placed. The external face of the shell-keep is polygonal, with eighteen short sections, but some of these have subsided into the ditch on the north side. The inside of the shell-keep is circular. There is an arched entrance on the south side and on either side of this there are draw-bar holes which would have been used to secure the main gate. Inside is a large, oval bailey protected by a well-preserved bank. The lord’s main residence would have been inside the bailey. The castle is now a Grade I listed building. 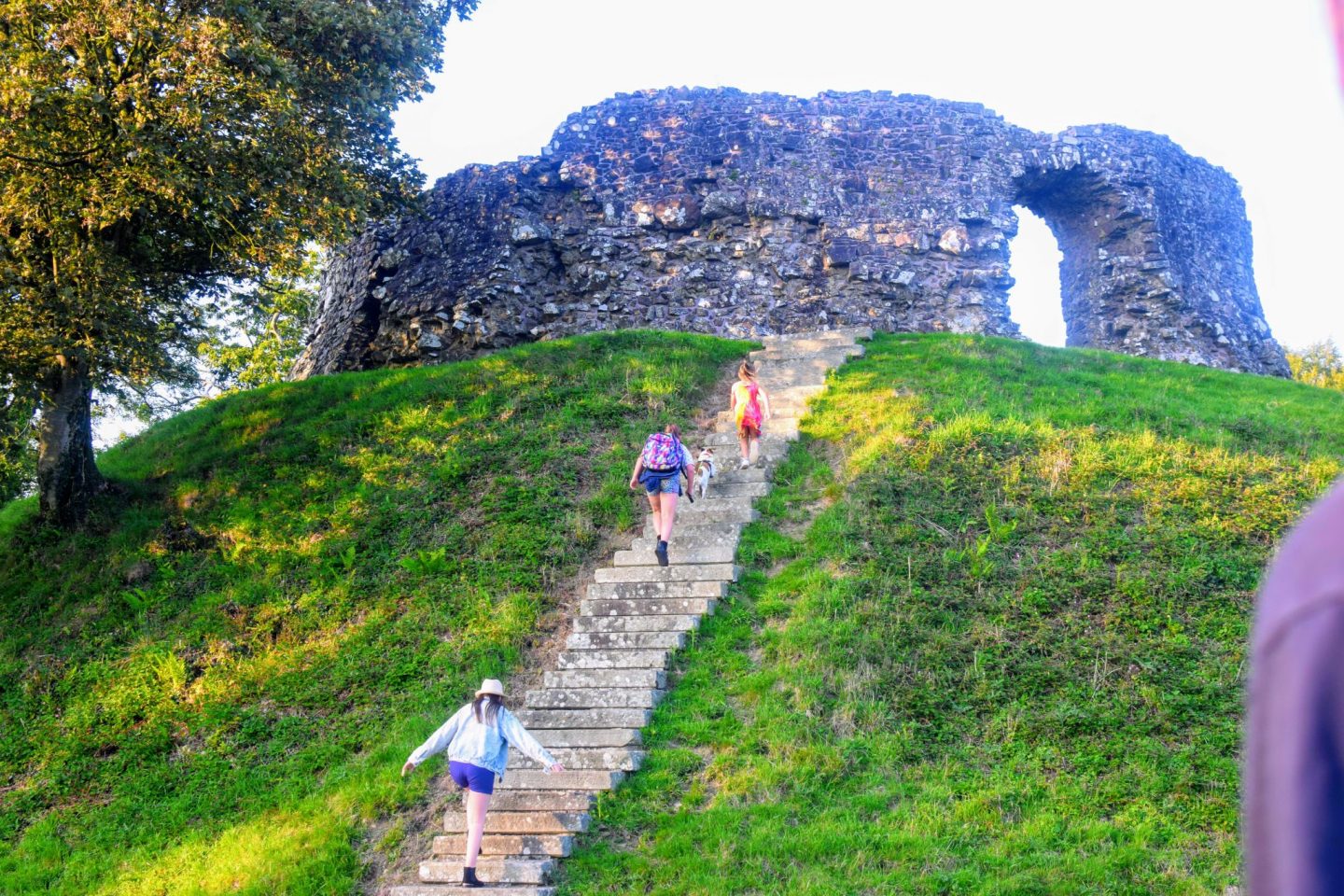 We climbed up the steep steps (there are approximately 75, but we didn’t count them on this visit).  The steps make this castle inaccessible to those with mobility problems but you can still admire the castle site from the ground. 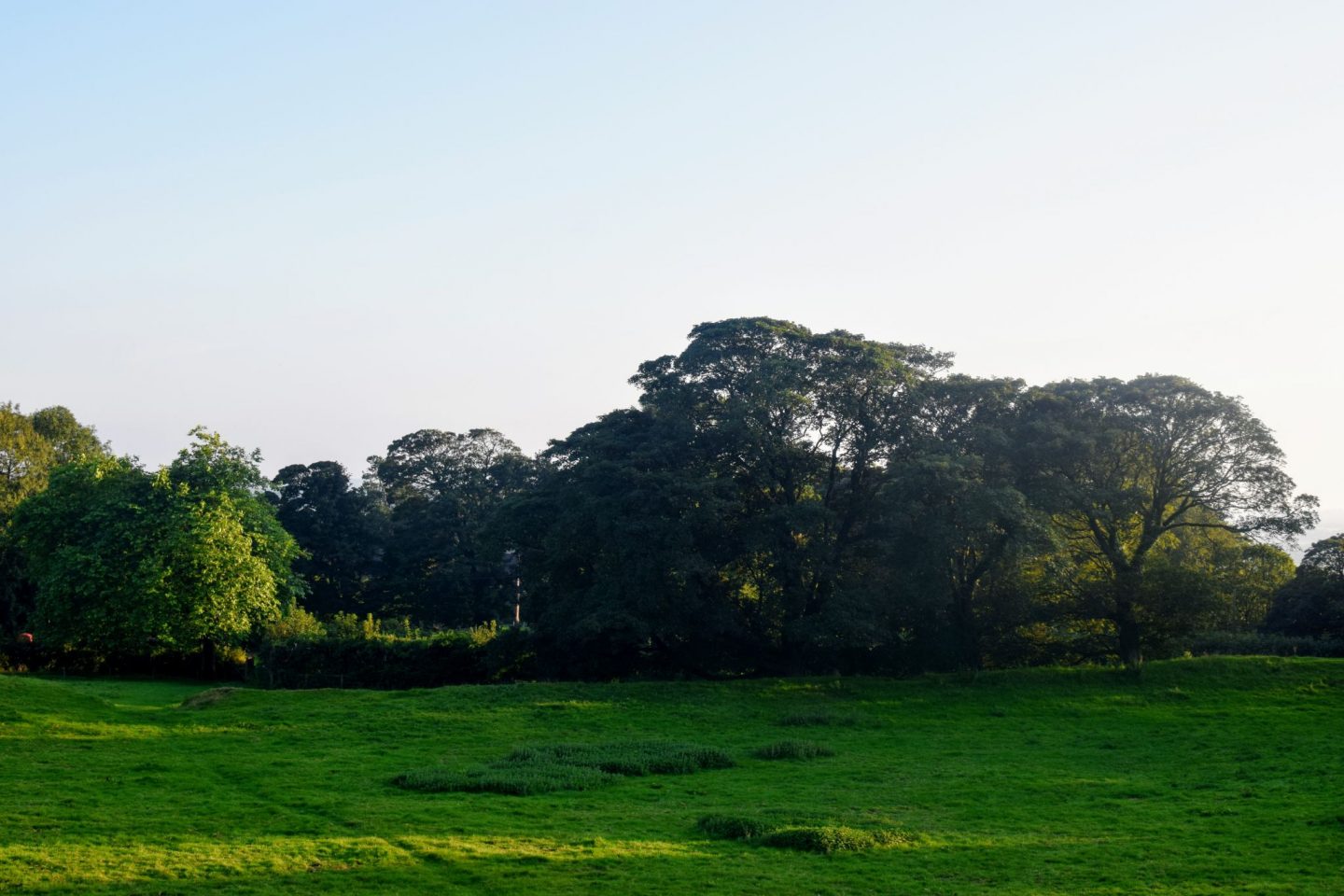 View from the Keep

Once at the top you can explore the Keep and enjoy the views.  Wiston Castle is situated opposite St Mary Magdalene Church (hidden from view by the trees). 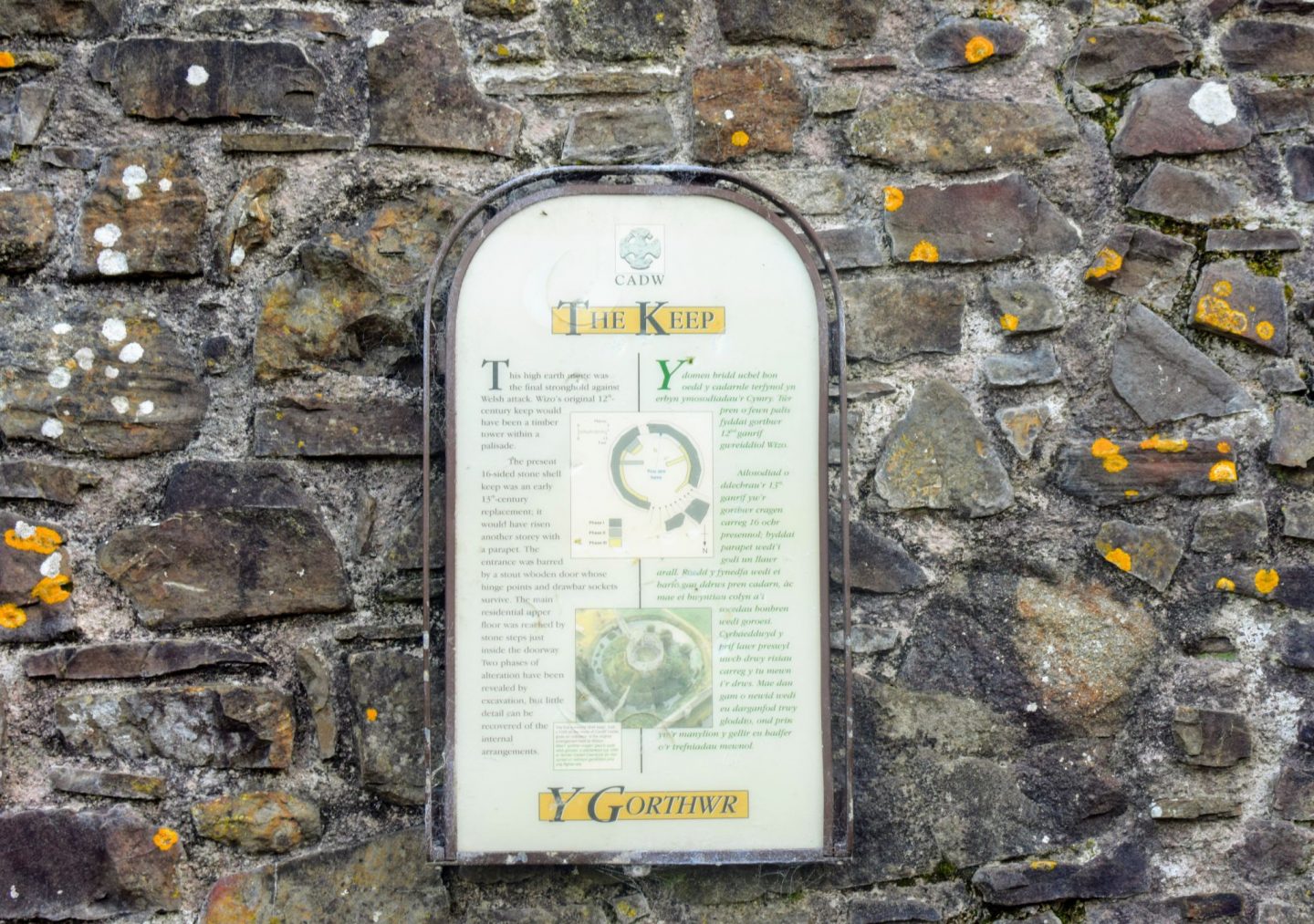 We read the sign and tried to imagine how the castle would have looked in the past.We found out the stone shell keep was built in the early 13th century to replace the 12th century timber frame.   Now,  only the lowest level remains standing just 10 feet high. 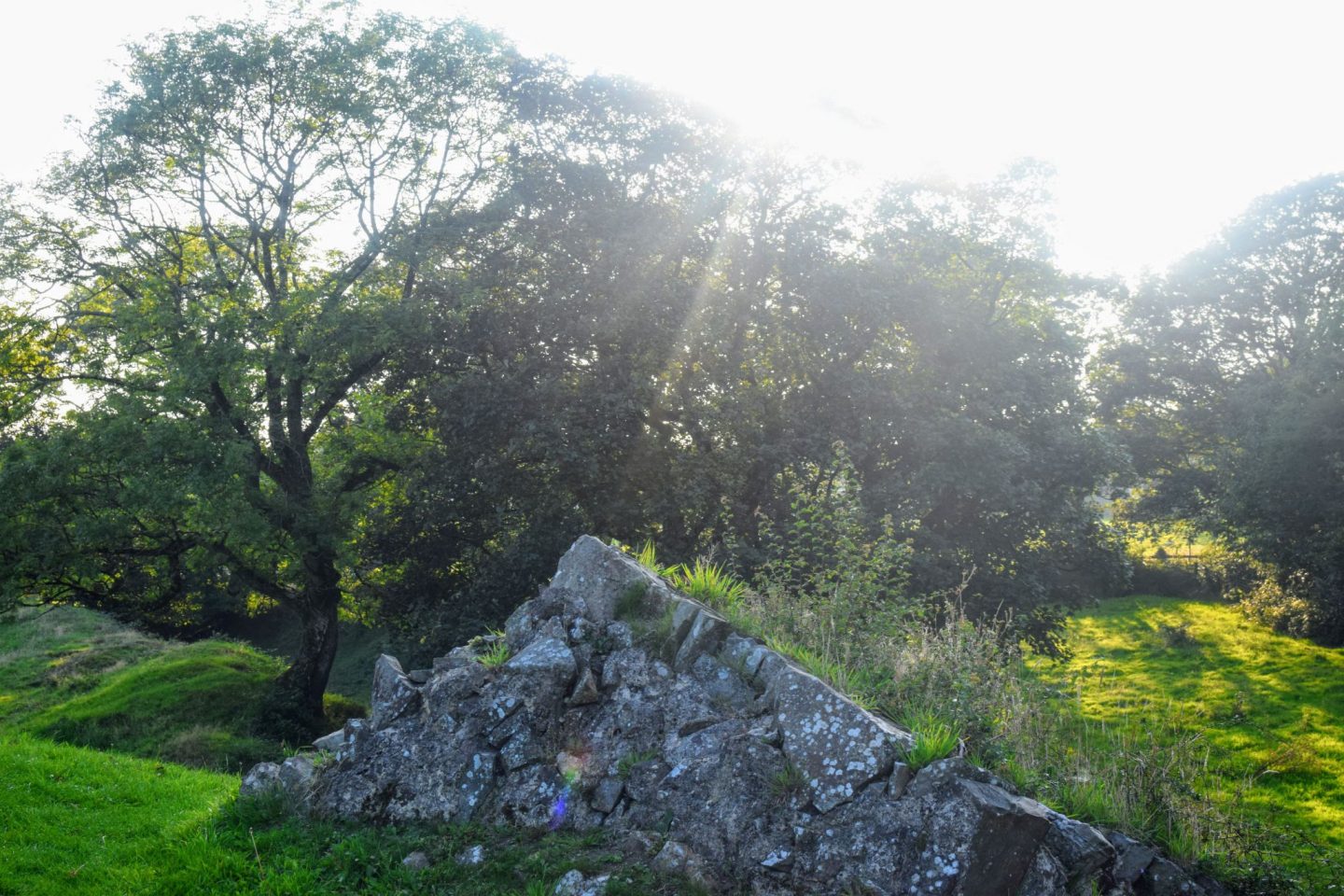 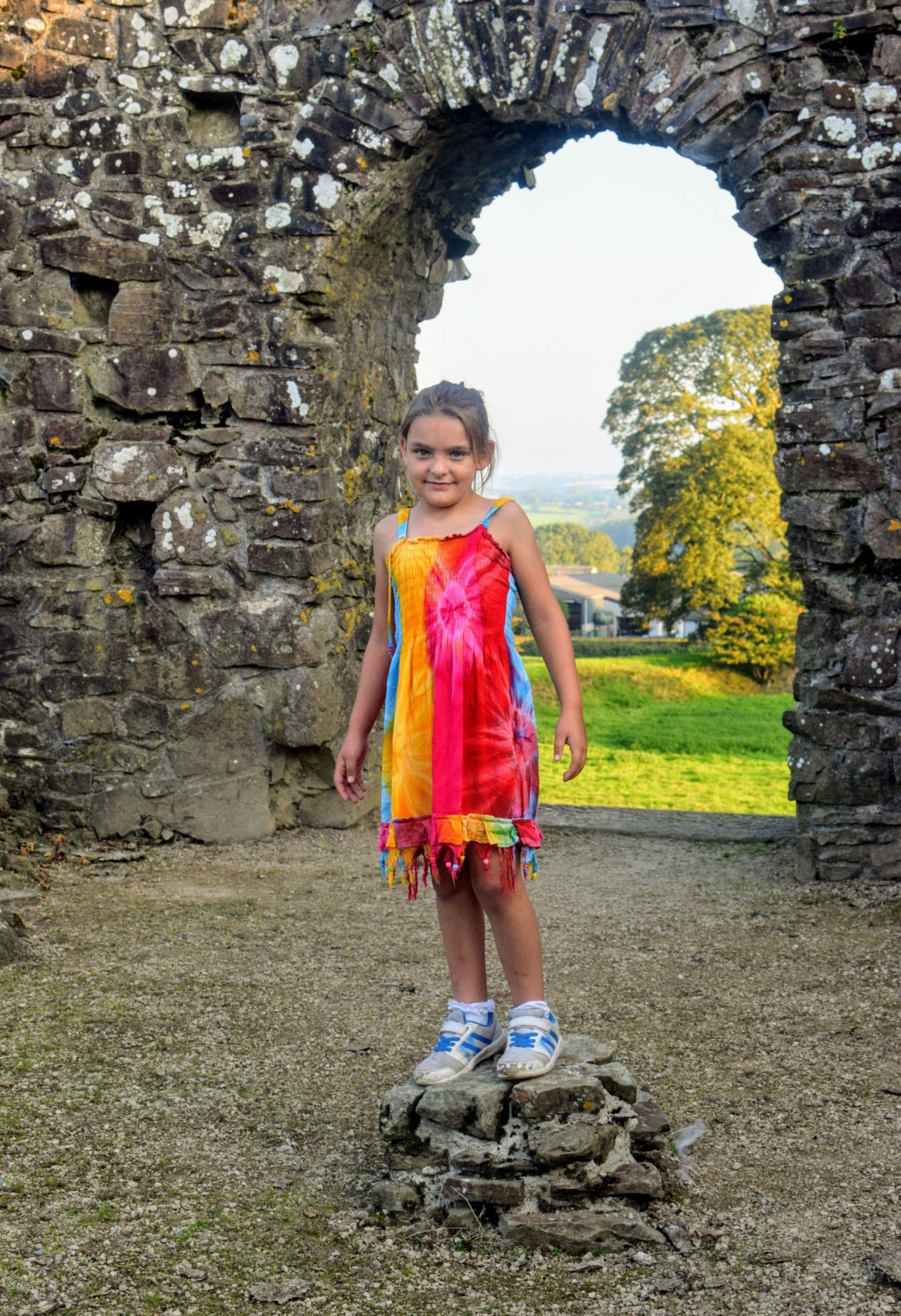 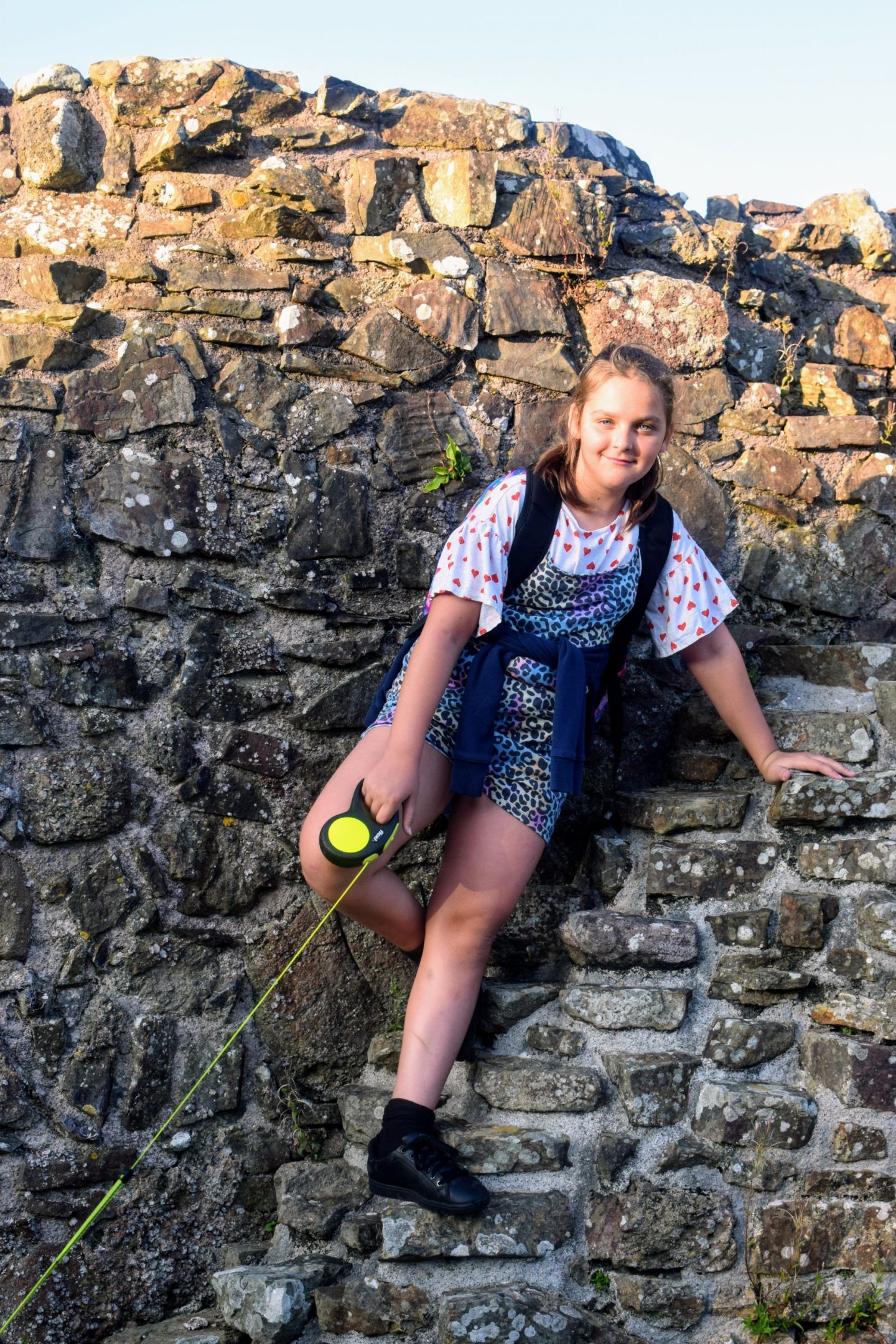 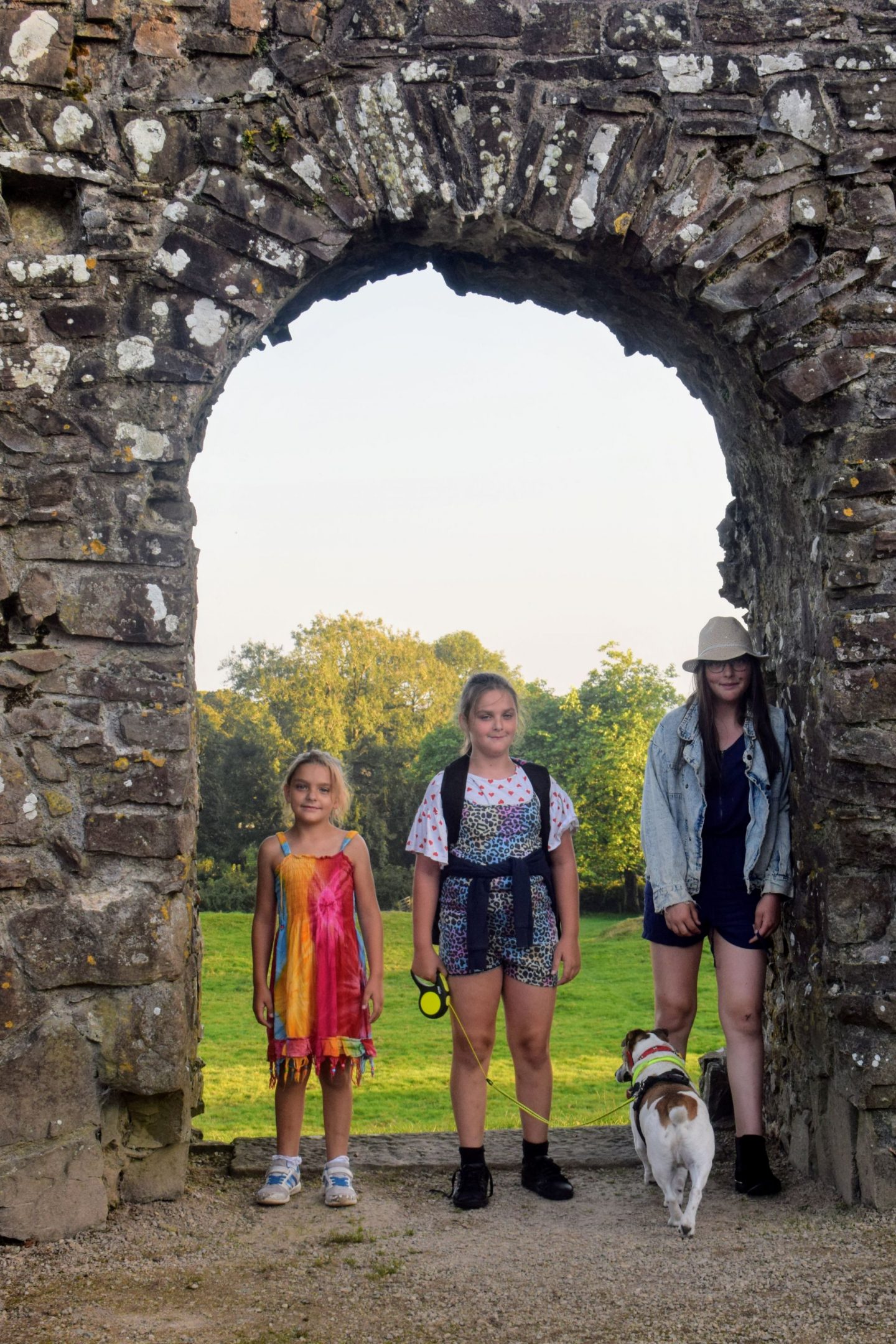 It’s impossible to take a picture with everyone facing the same way! 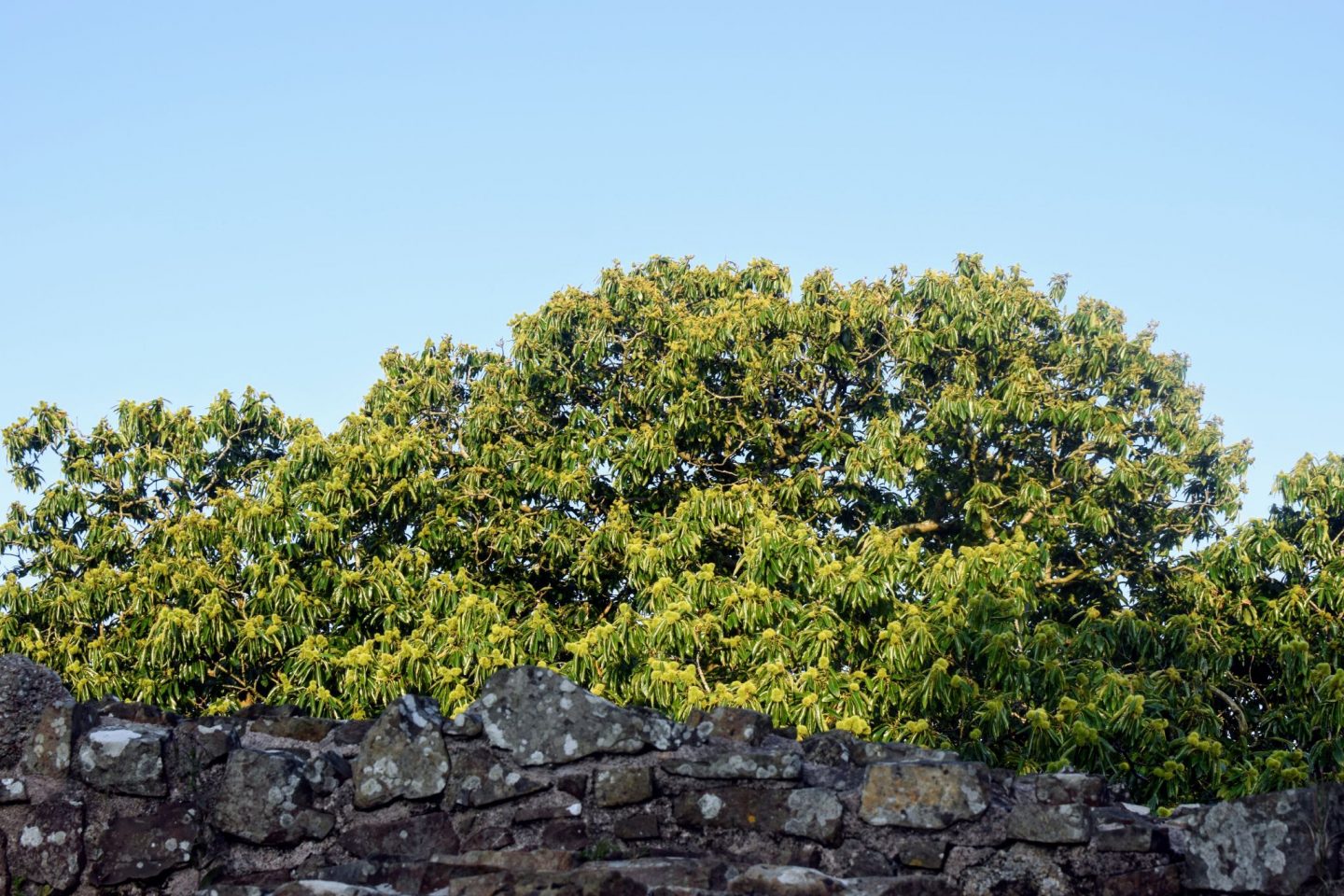 If you love castles and haven’t visited Wiston Castle yet, then it’s definitely worth a visit.  Bear in mind that there’s not enough there to keep you entertained all day.  However, you could add to your visit with a trip to the church which contains a Norman font.  There’s also lots to do at nearby Picton Castle where you could continue the history lesson or Clerkenhill Adventure Farm if you’re visiting with younger children (continuing the theme Clerkenhill has a lovely wooden play castle).

We turned our Geocache app on to extend our visit.   Sadly there isn’t one to find in the telephone box.  There is one to find approximately 100m from there though!  There are a few others in the area too. 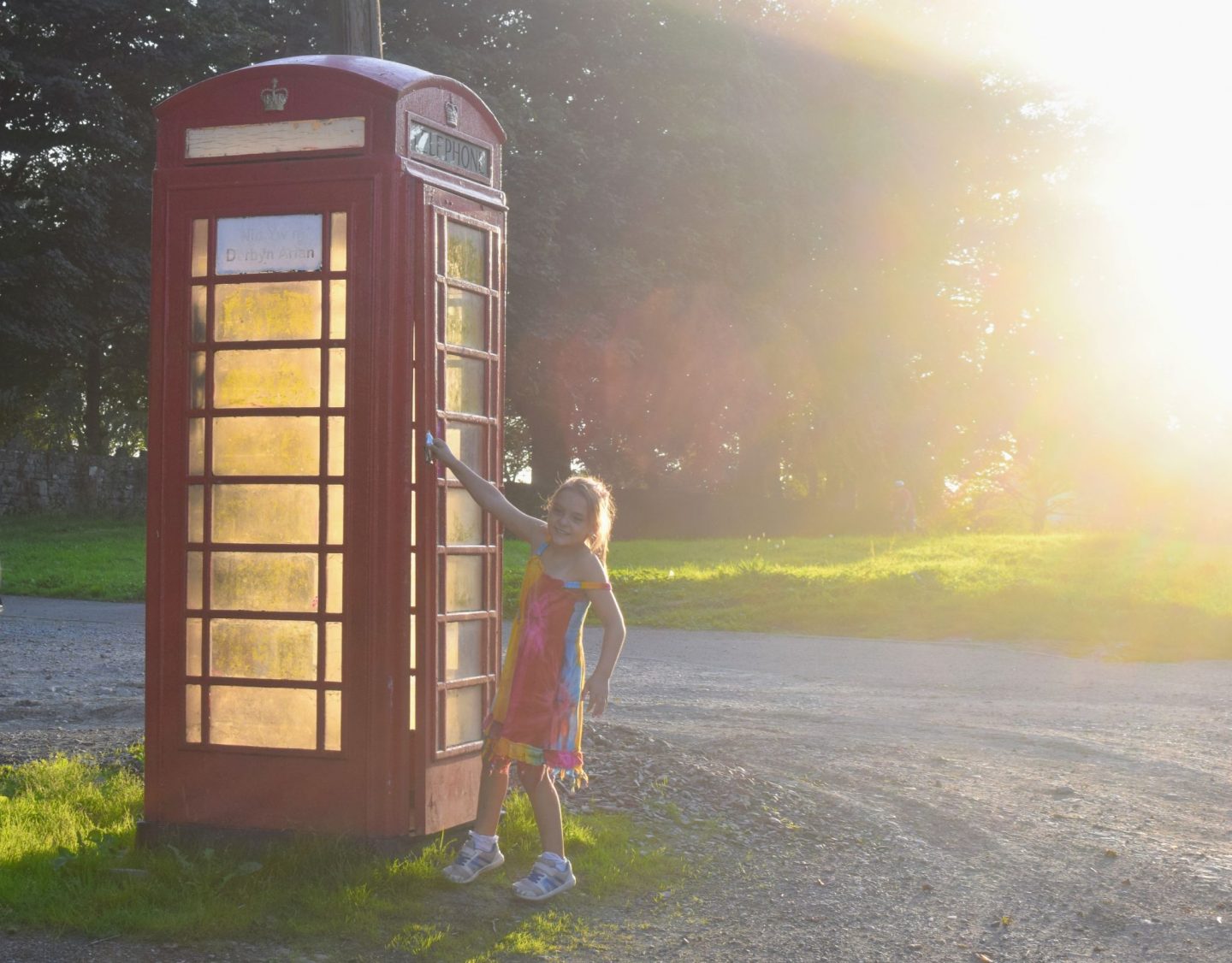 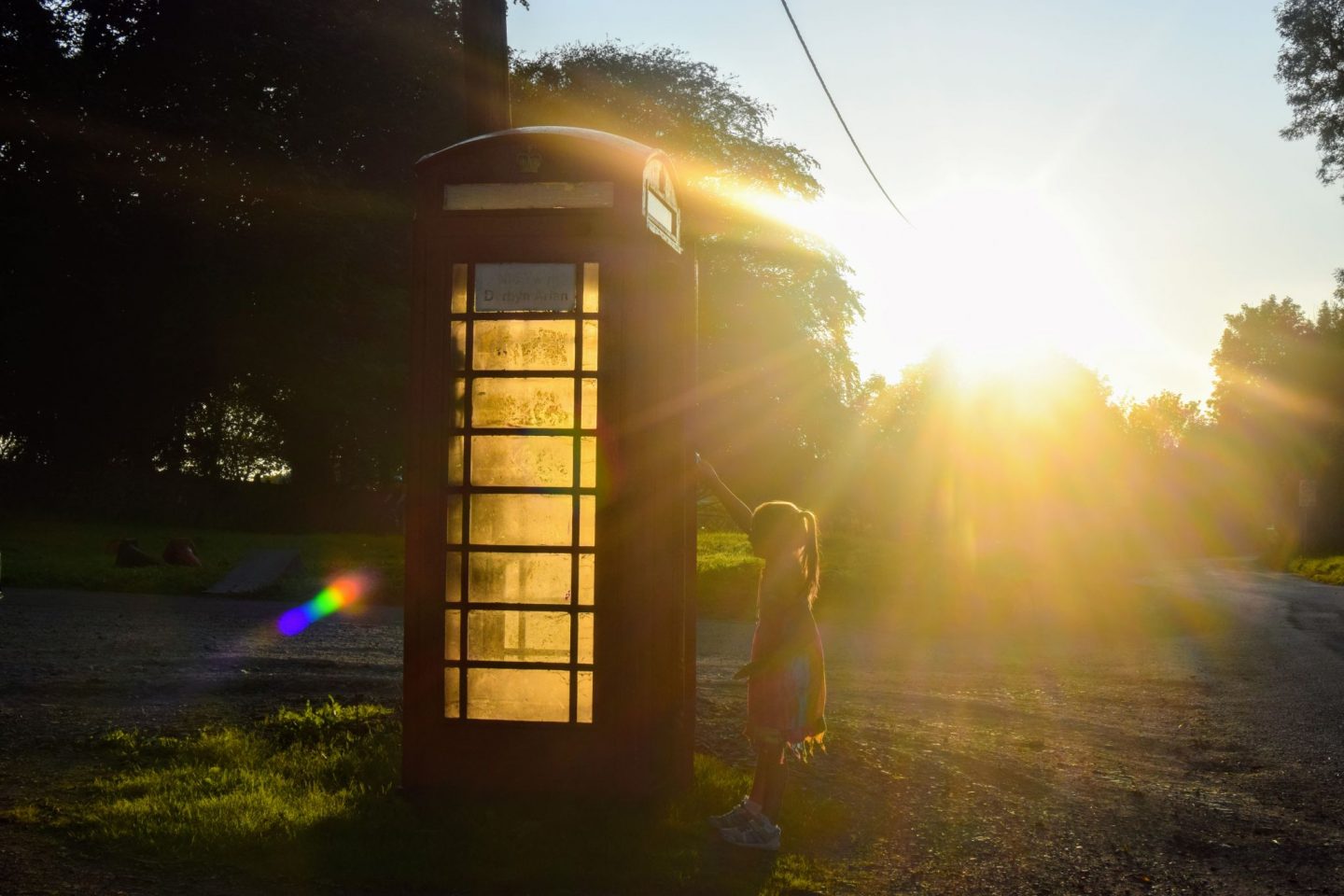 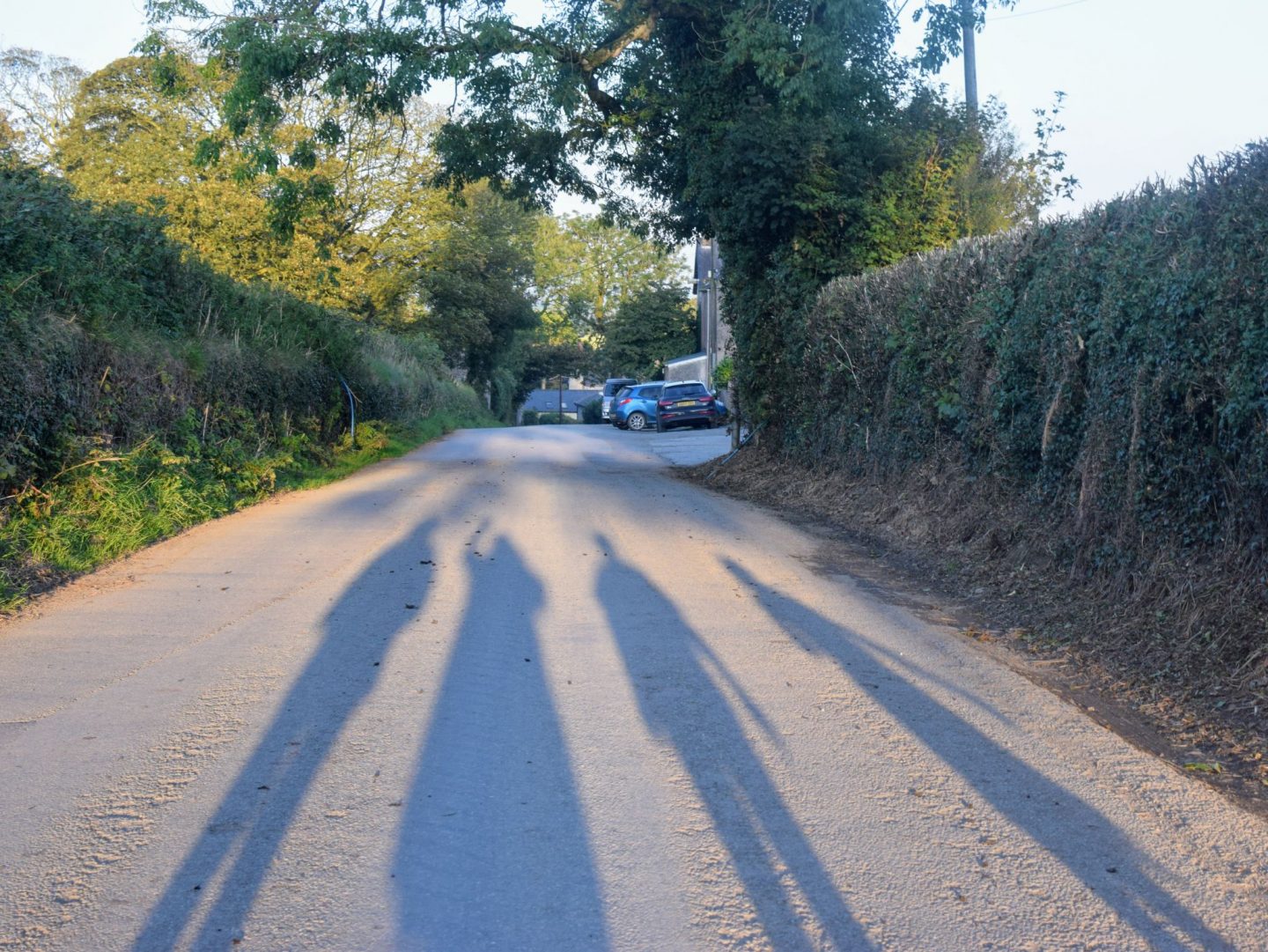 This was us on the way to our first Geocache. 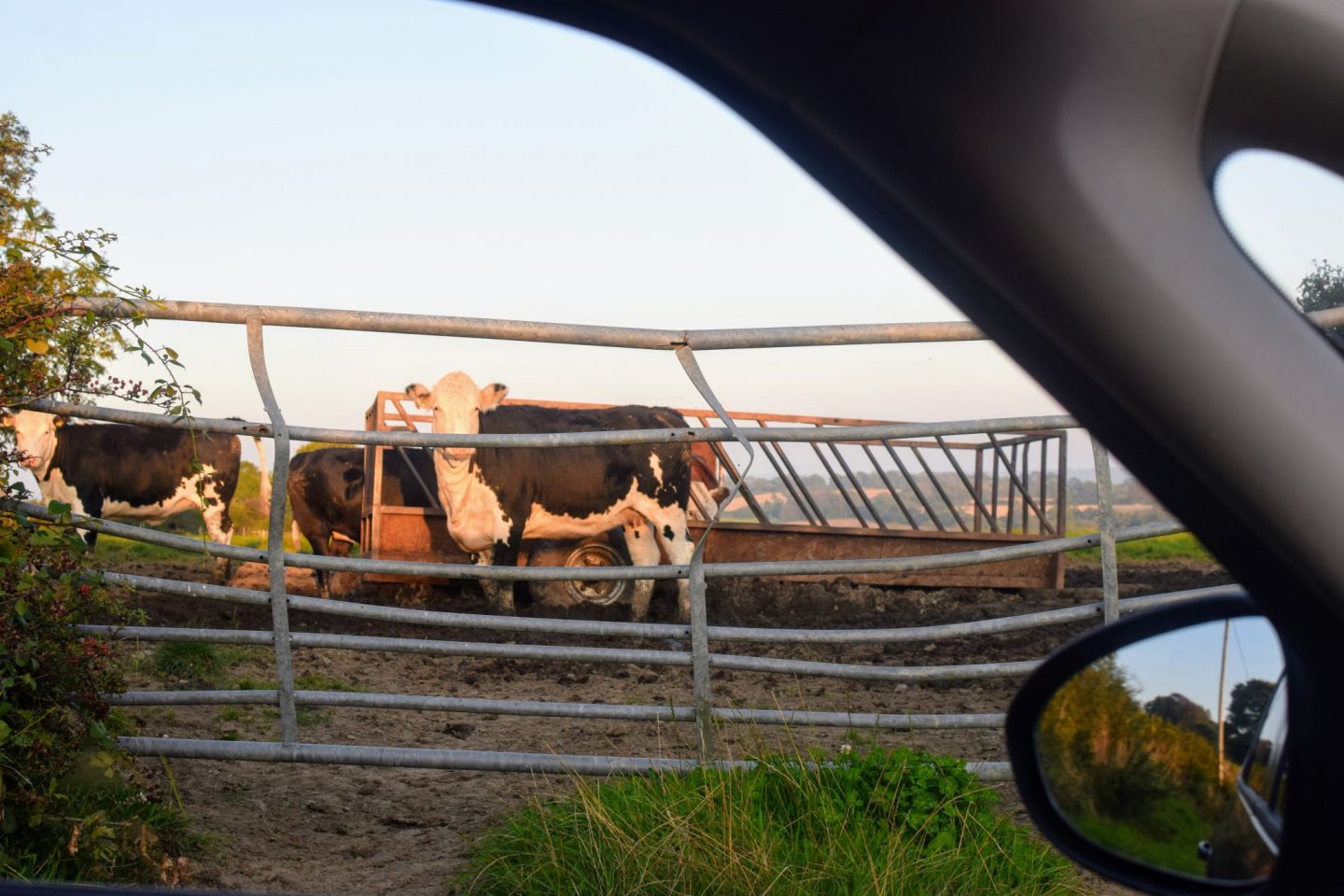 We also found one on the car journey home.  The cows looked amused as we searched for the hidden nano. 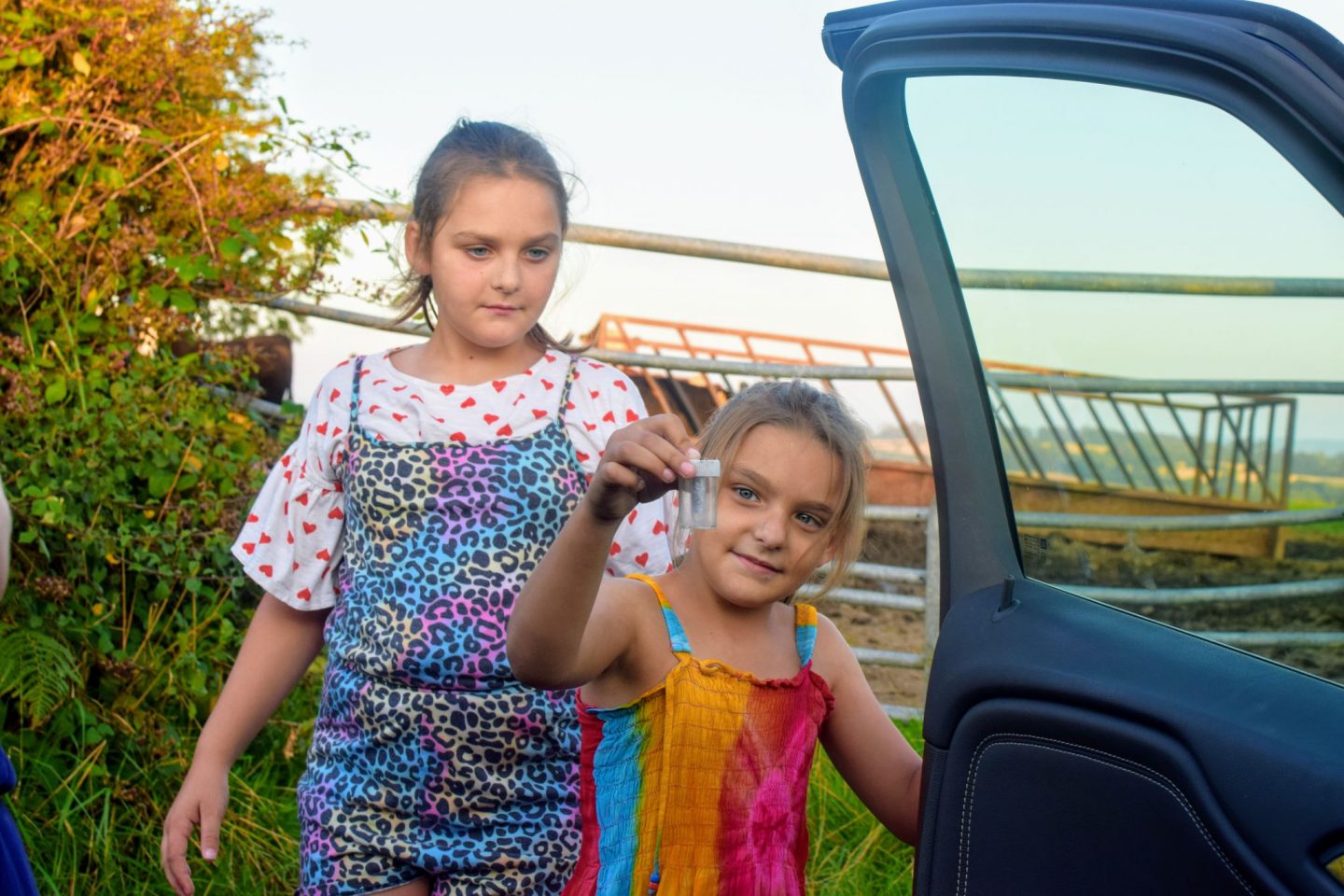 We had a fun evening exploring Wiston Castle and learning about Motte and Bailey castles.

Have you visited Wiston Castle? 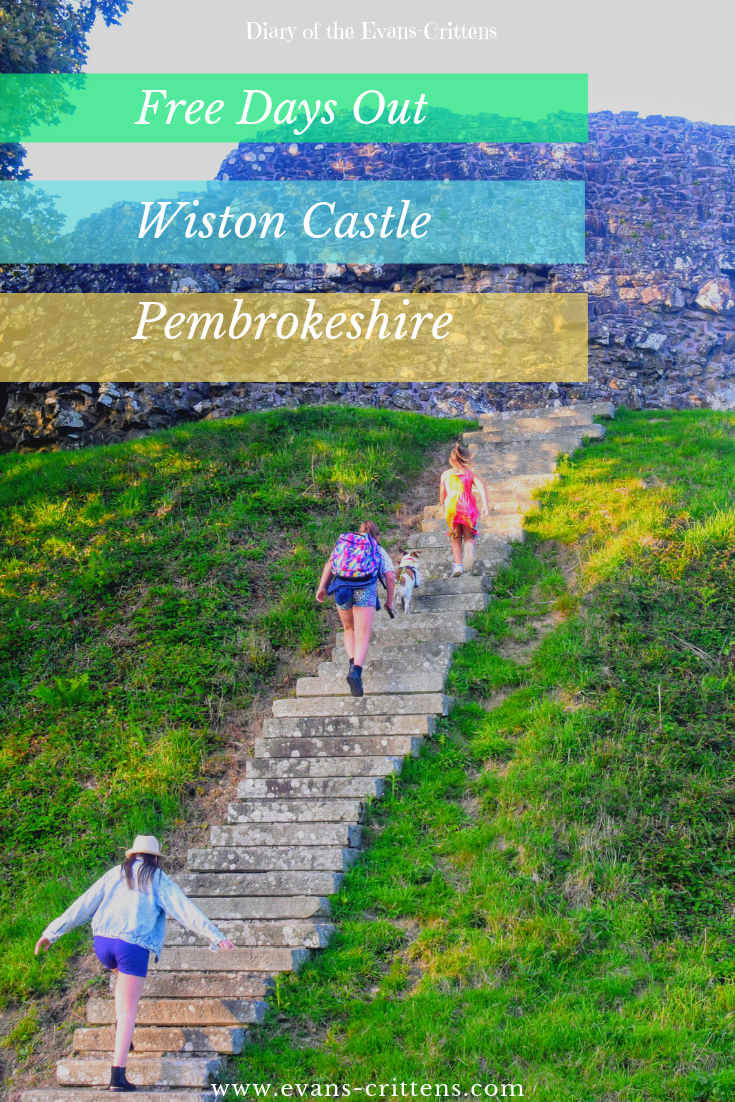