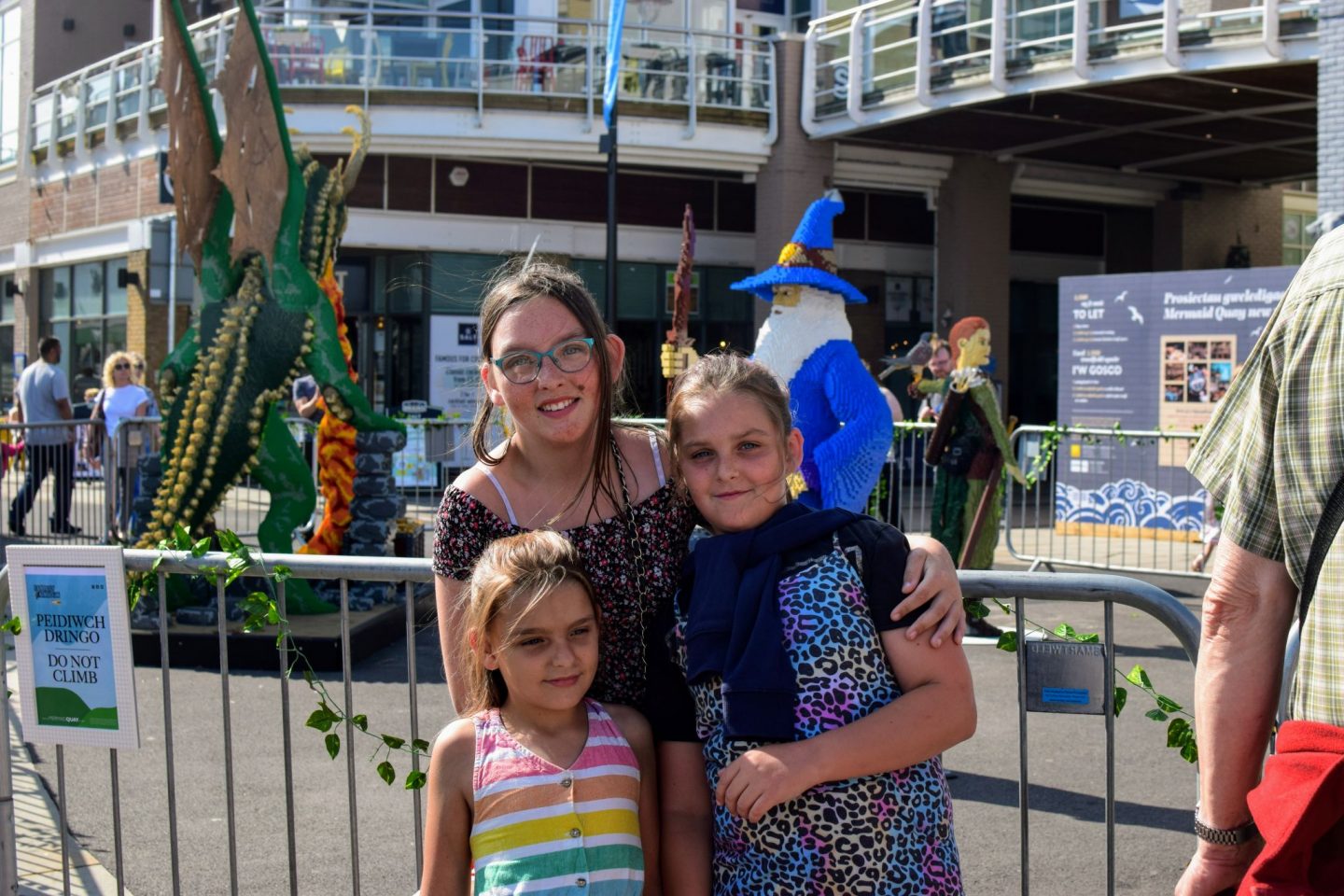 While we were in Cardiff reviewing Madagascar the Musical we also had spare time to explore Cardiff Bay.  Being country and coastal based it’s great to get the chance to spend time in the city and Cardiff is one of our favourites, of course!  We took the train from Cardiff Central to Cardiff Bay and made our way to Mermaid Quay to find the LEGO Mythical Creatures at BRICKLIVE Fantasy Kingdom. 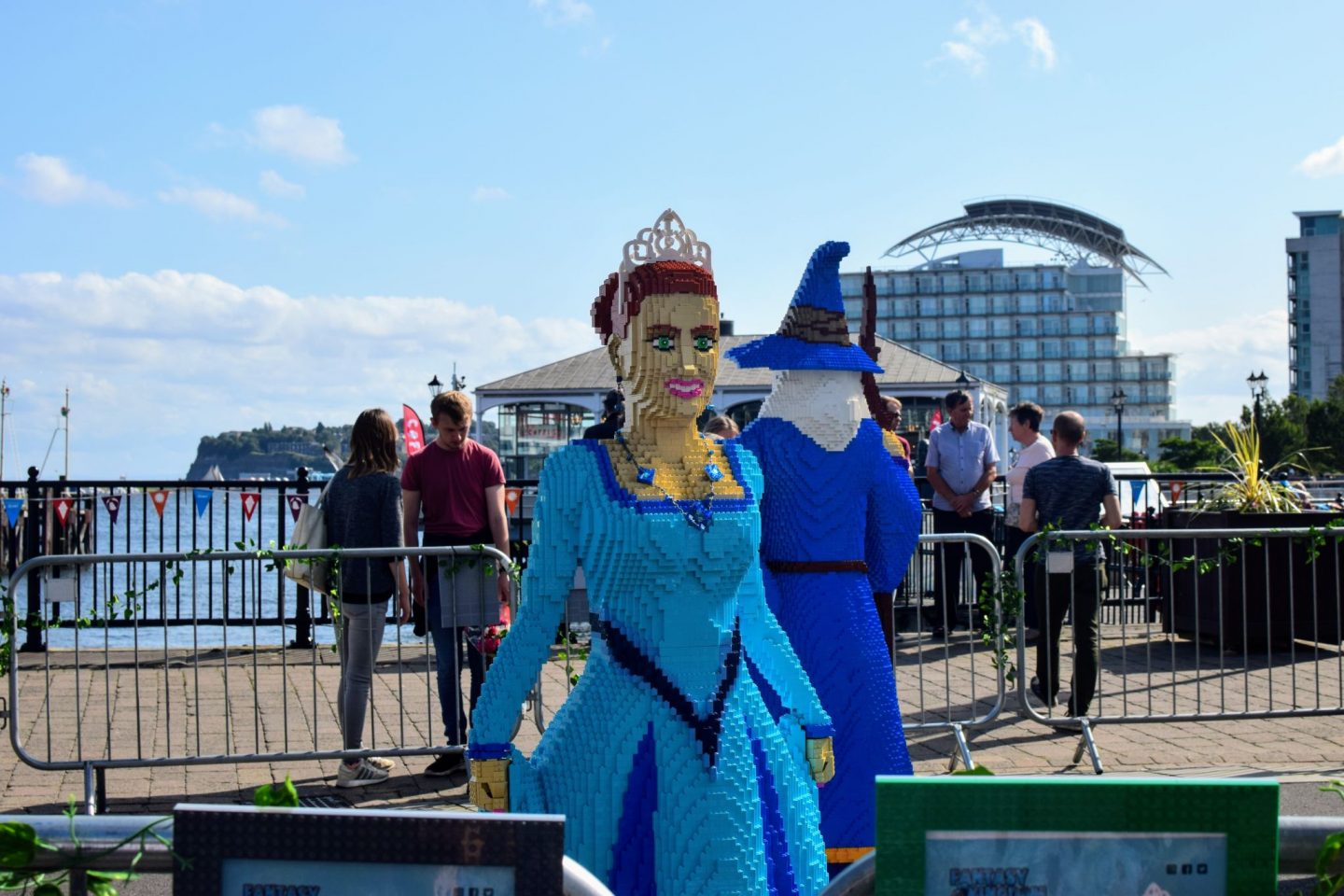 We walked past Wales Millennium Centre, Cardiff Bay Beach and across the bay to Tacoma Square.  We immediately spotted the large LEGO statues and were pleased to see it was quite quiet so we could easily walk around and take a look at the creations as well as snap some photographs.  The kids enjoyed reading the information about each creation.  I hope it will inspire them in their own LEGO making! 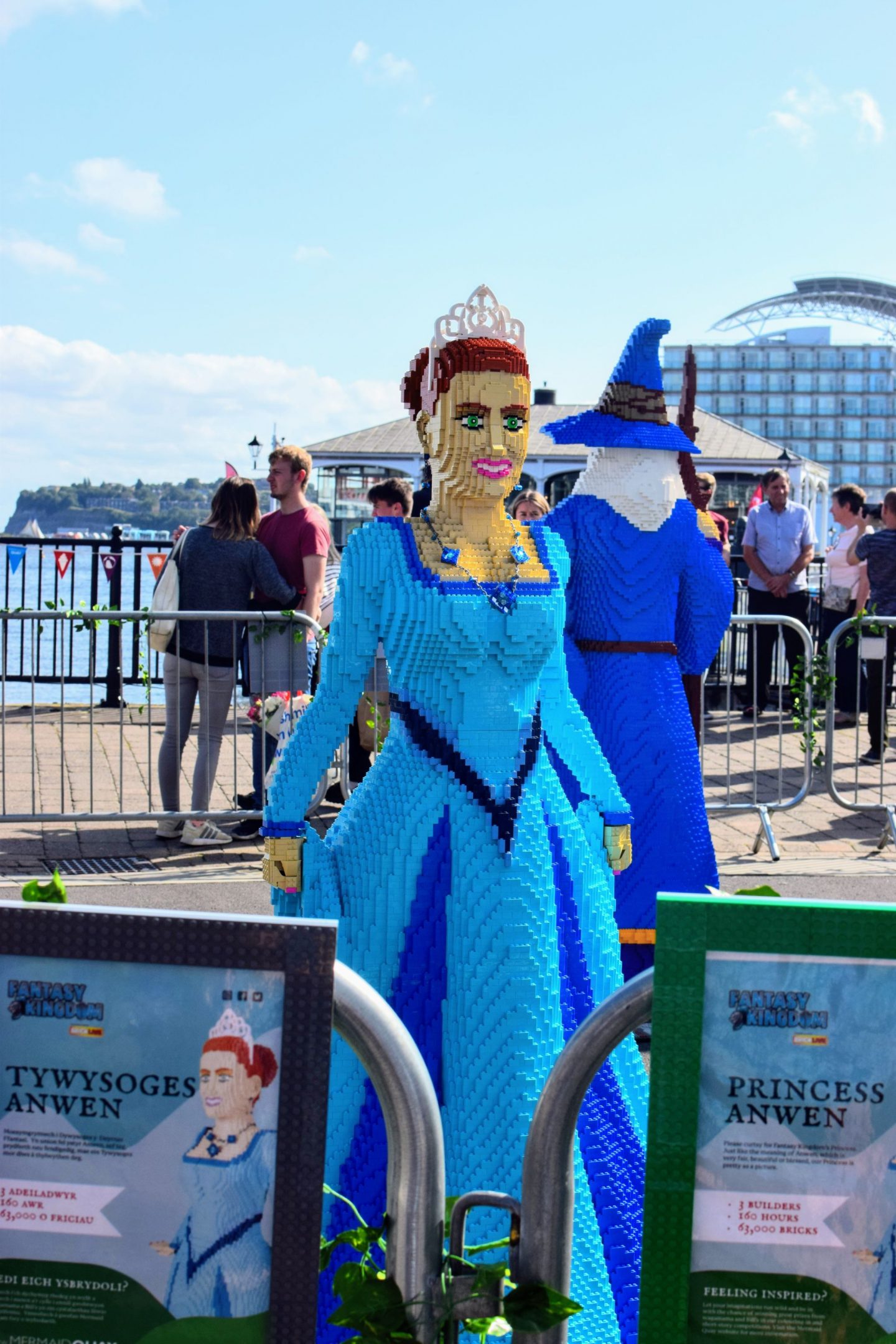 This is Princess Anwen, who needs to return her father’s kingdom to peace and prosperity.

“Please curtsy for  Fantasy Kingdom’s Princess.  Just like the meaning of Anwen, which is very fair, beautiful or blessed, our Princess is pretty as a picture.” 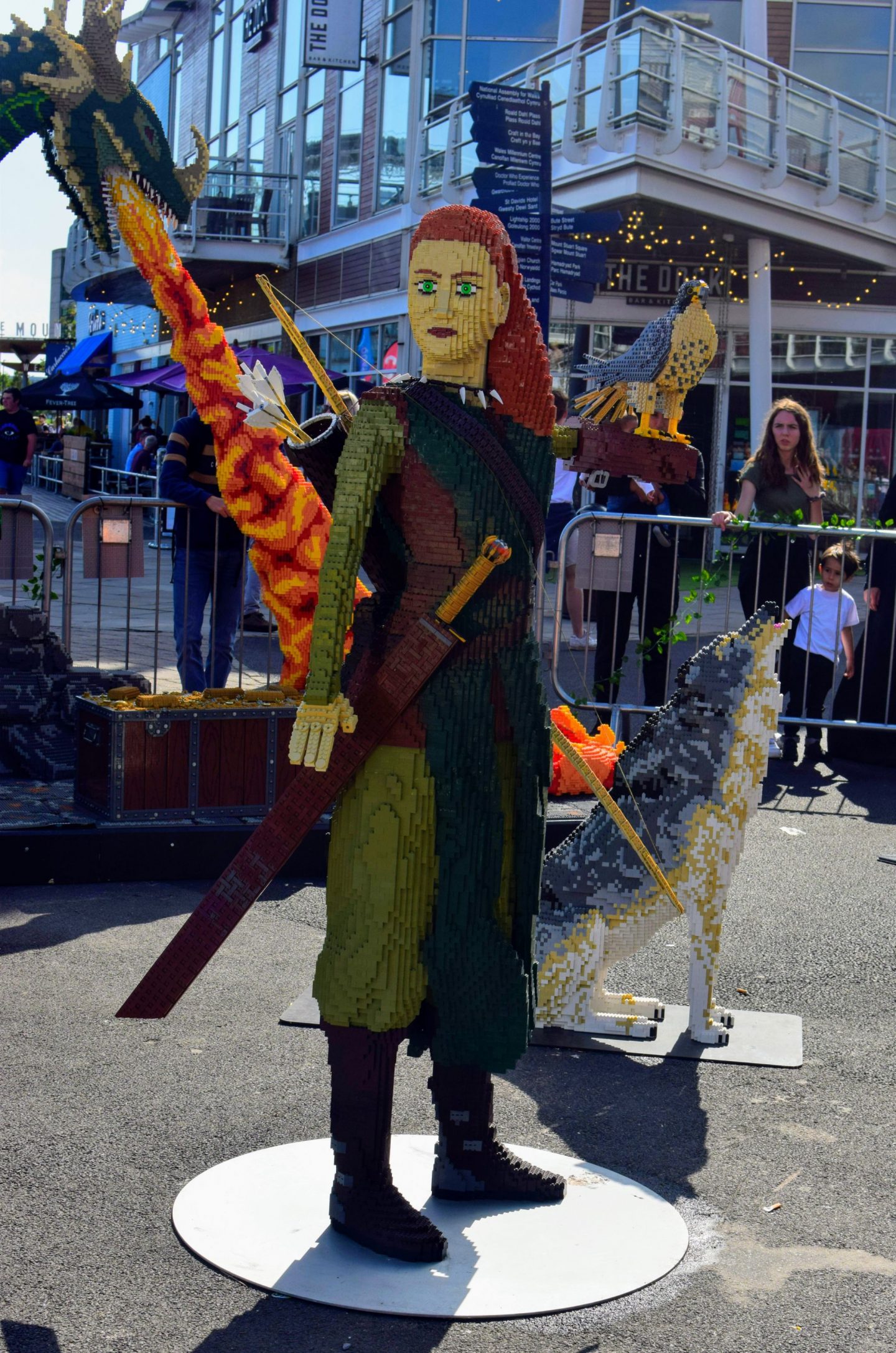 Heledd the Huntswoman will help Princess Anwen on her quest to save the Brick Kingdom.

“Our fierce huntswoman keeps watch over Fantasy Kingdom keeping enemies at bay.  Her name has links to medieval Welsh history and derives from the Welsh word “hela” which means to hunt in English.” 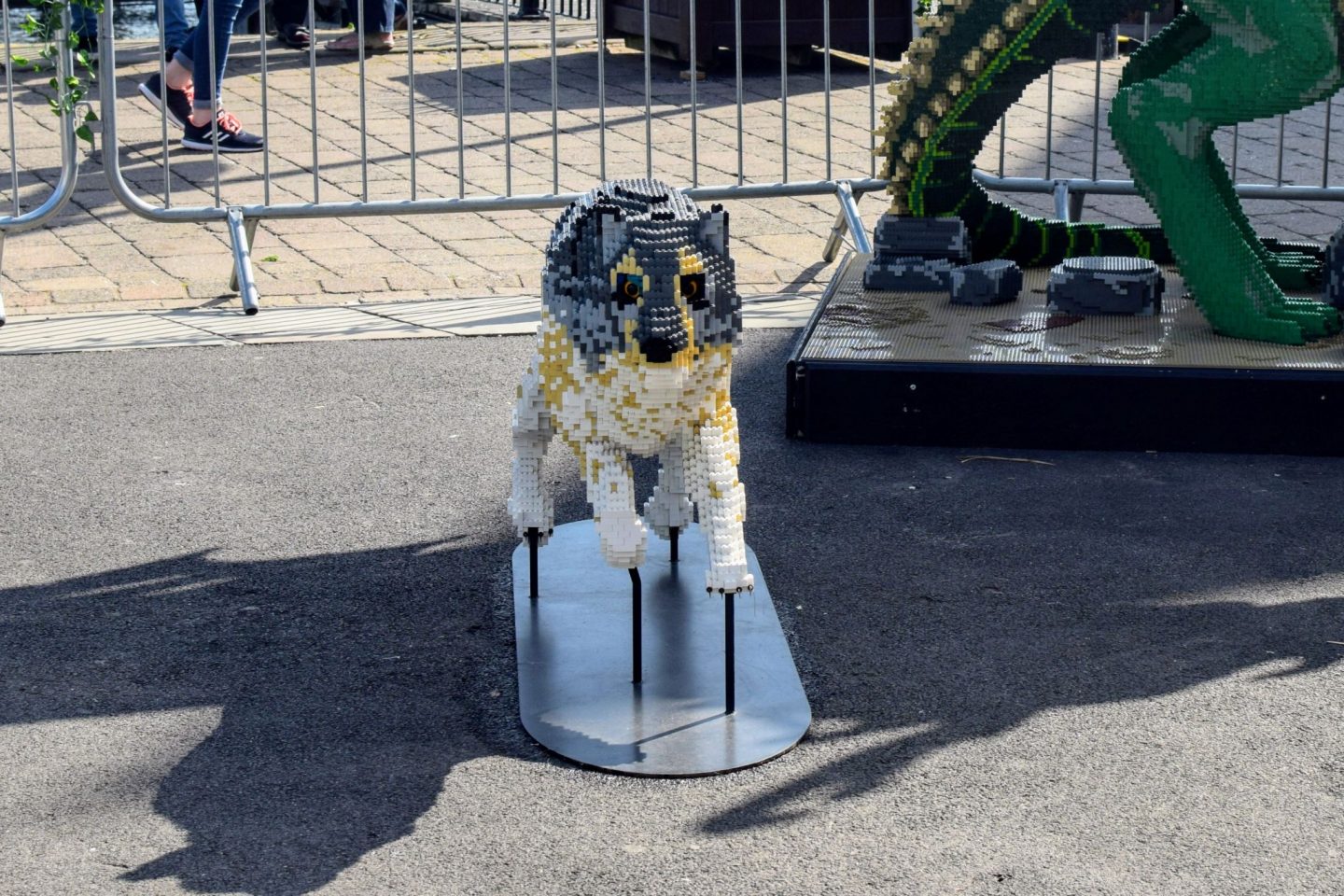 “Together with Heledd, these two wolves- Fang and Spike- form a formidable hunting party.  Don’t let them smell your fear!” 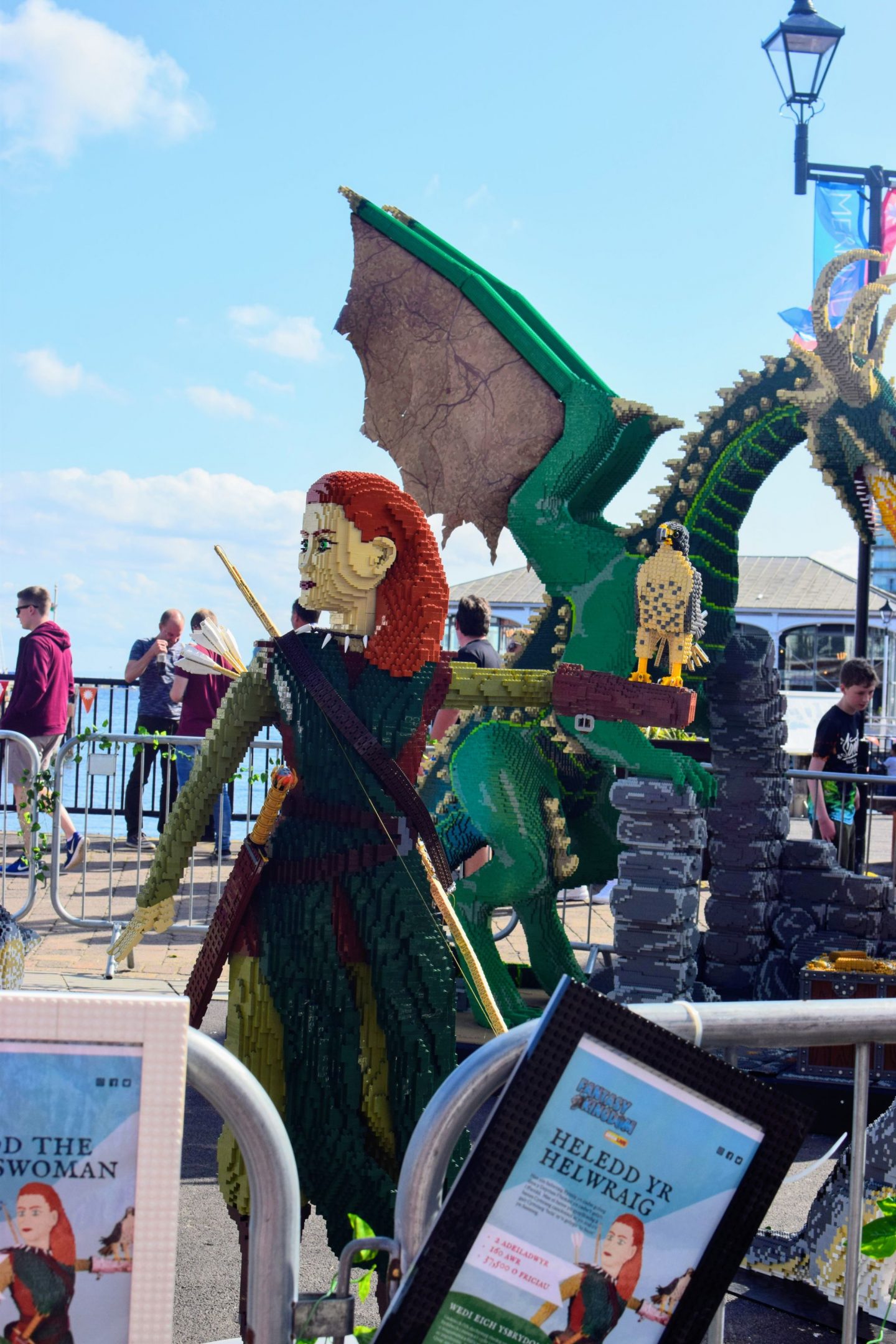 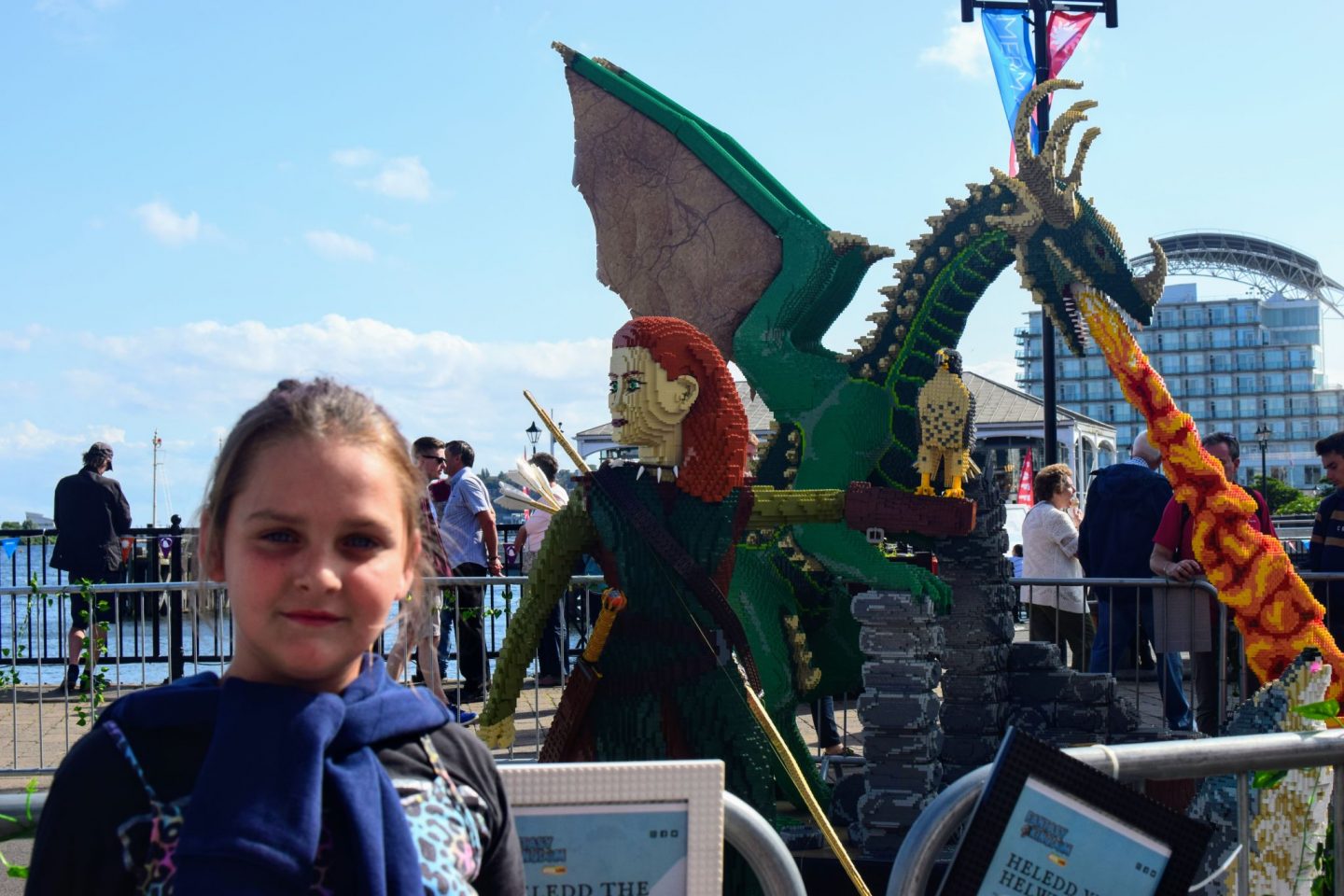 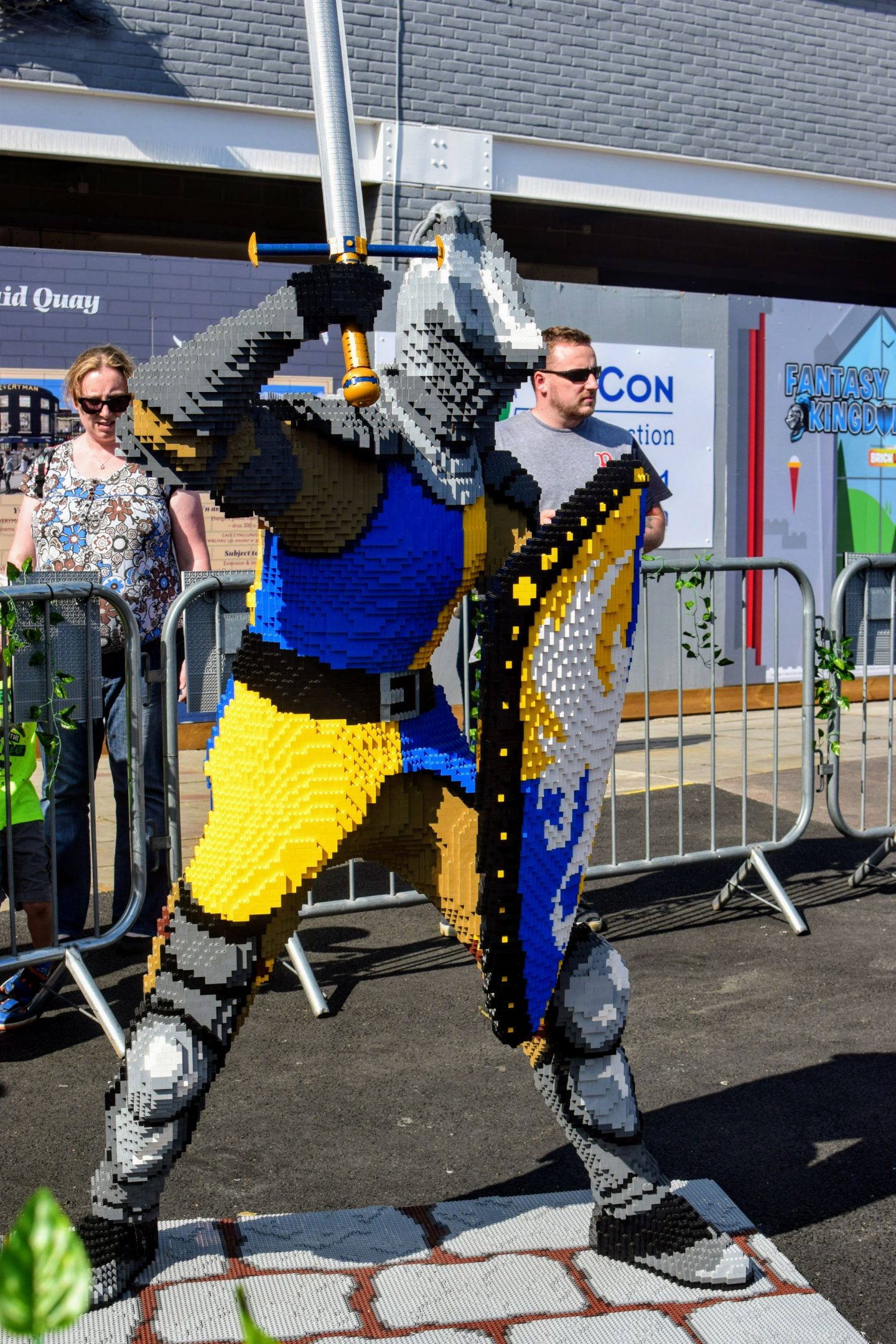 Sir Macsen the Knight –  “His name is the welsh version of Max or Maximus, which means “greatest”.  Macsen was also what the Welsh called a Roman Emperor who played an important role in Welsh history and appears in Arthurian legend.” 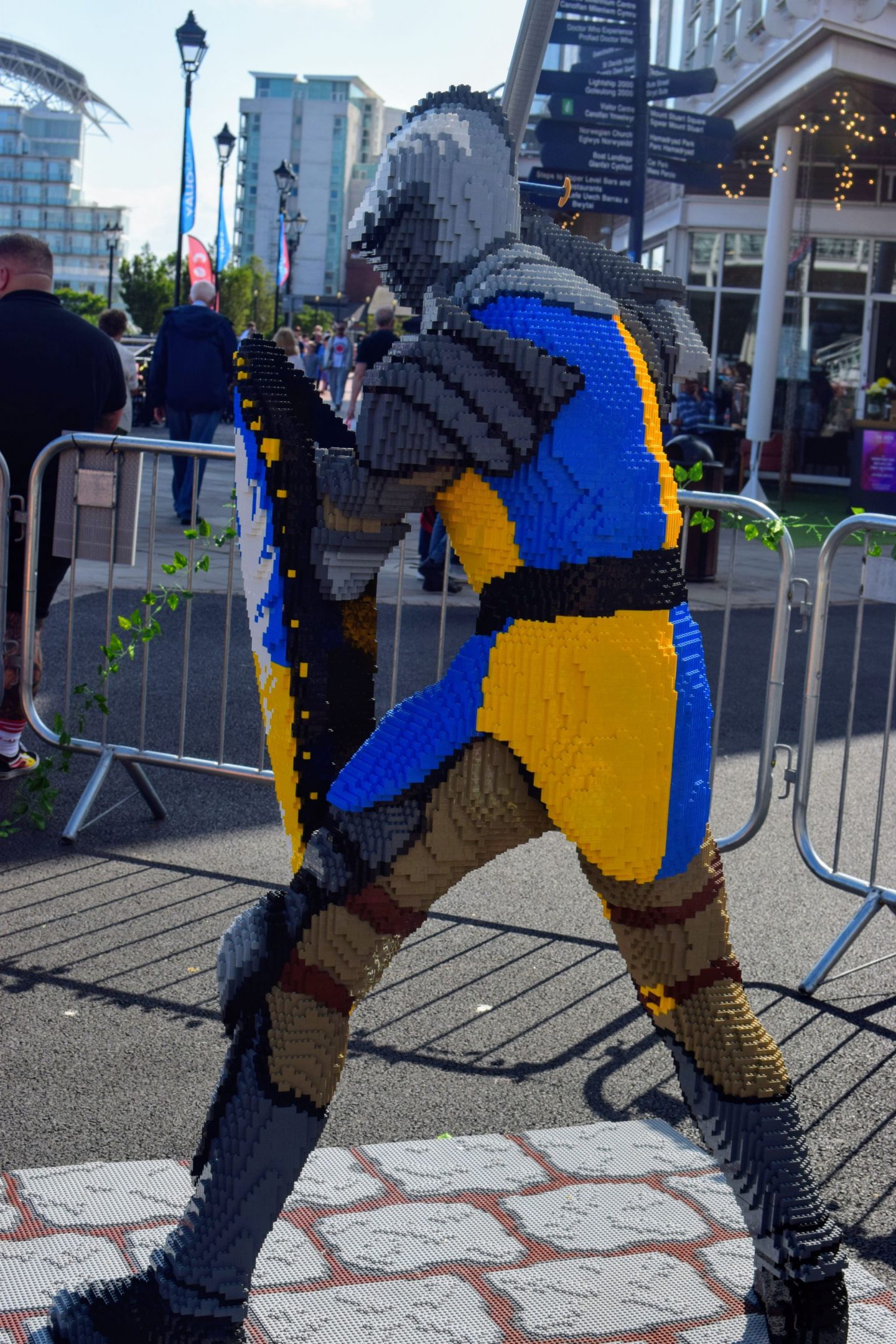 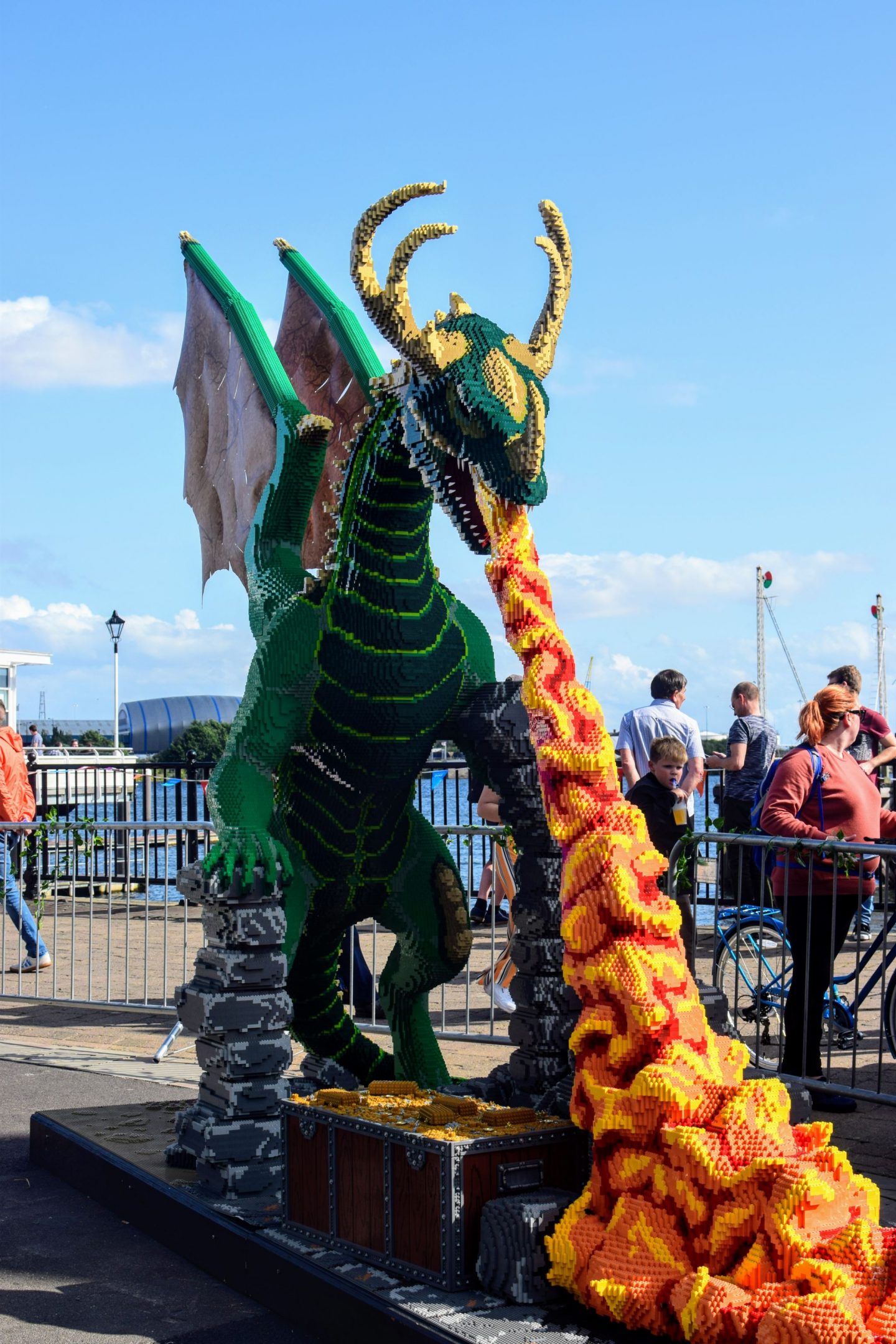 “Our mighty 11ft fire-breathing dragon is stirring from its ancient slumber, getting ready to spread its wings and take flight!” 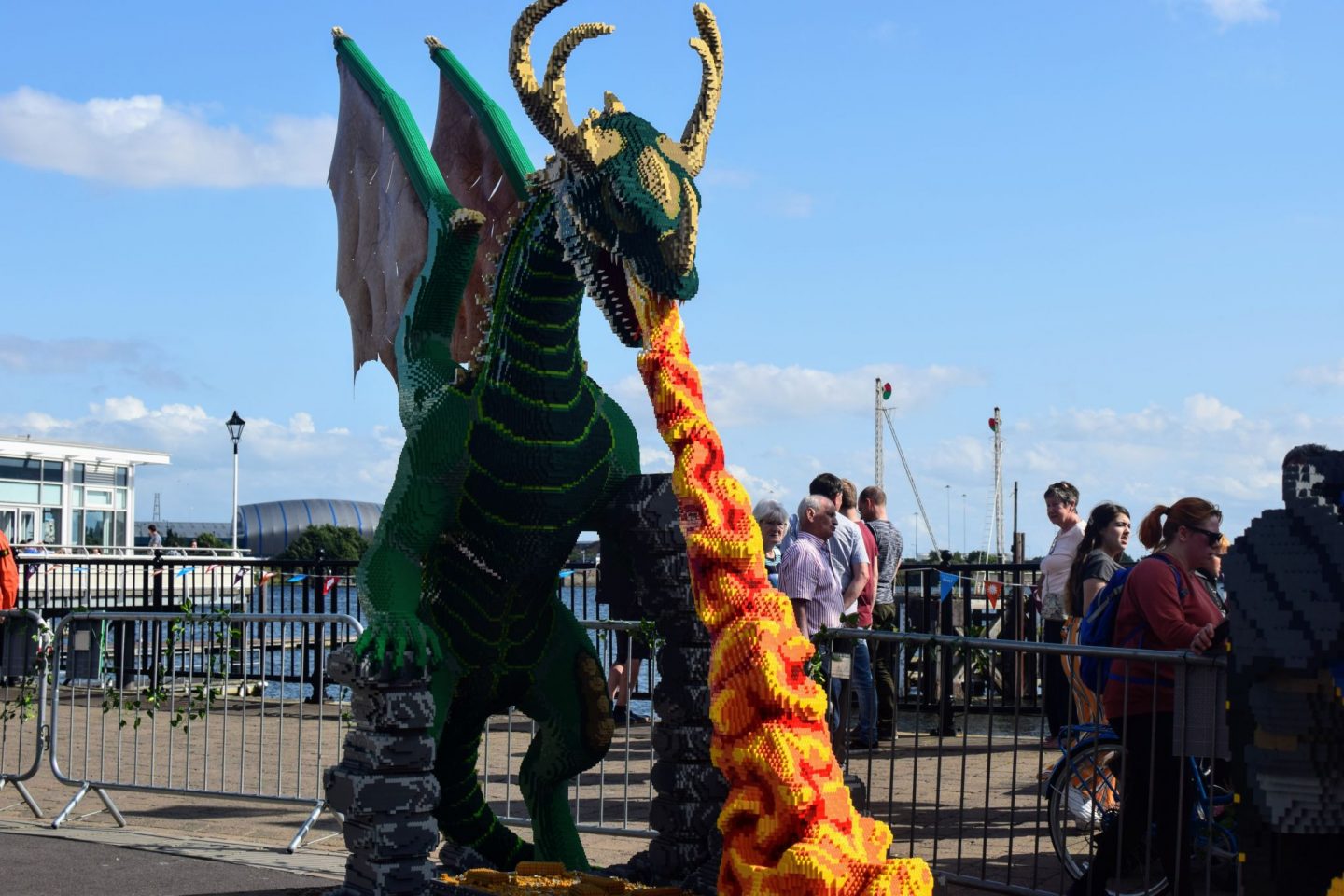 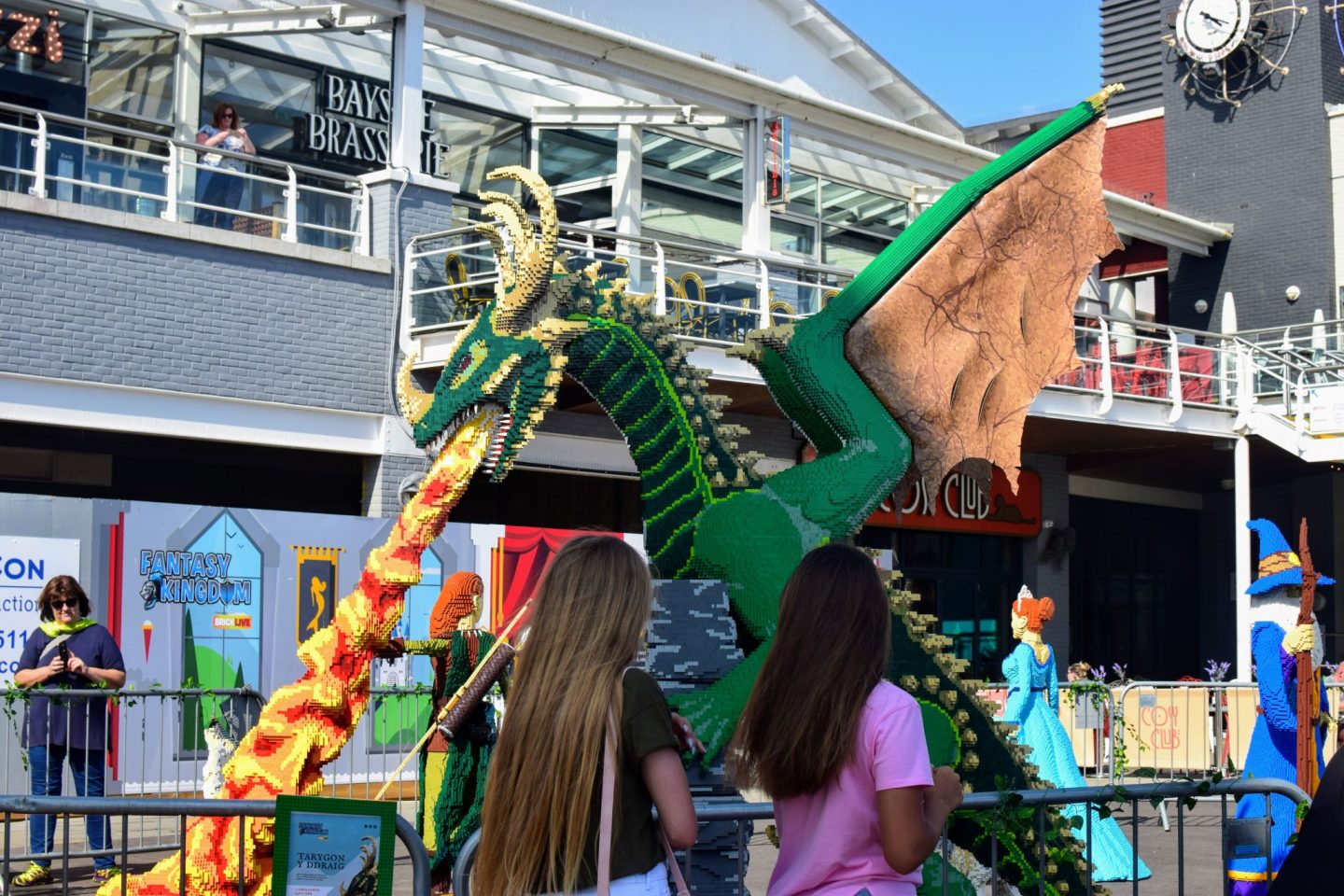 The enormous dragon is very impressive! 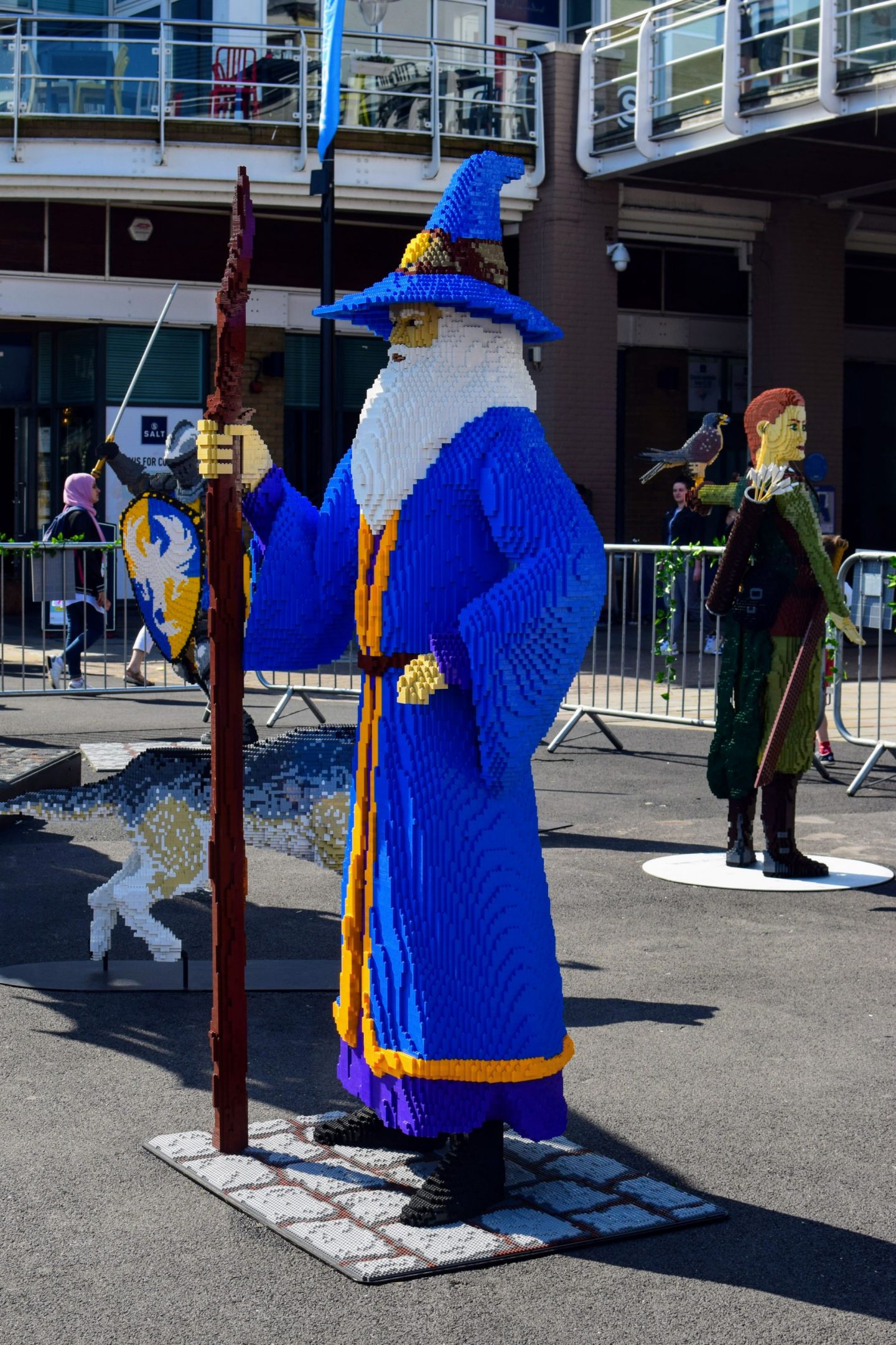 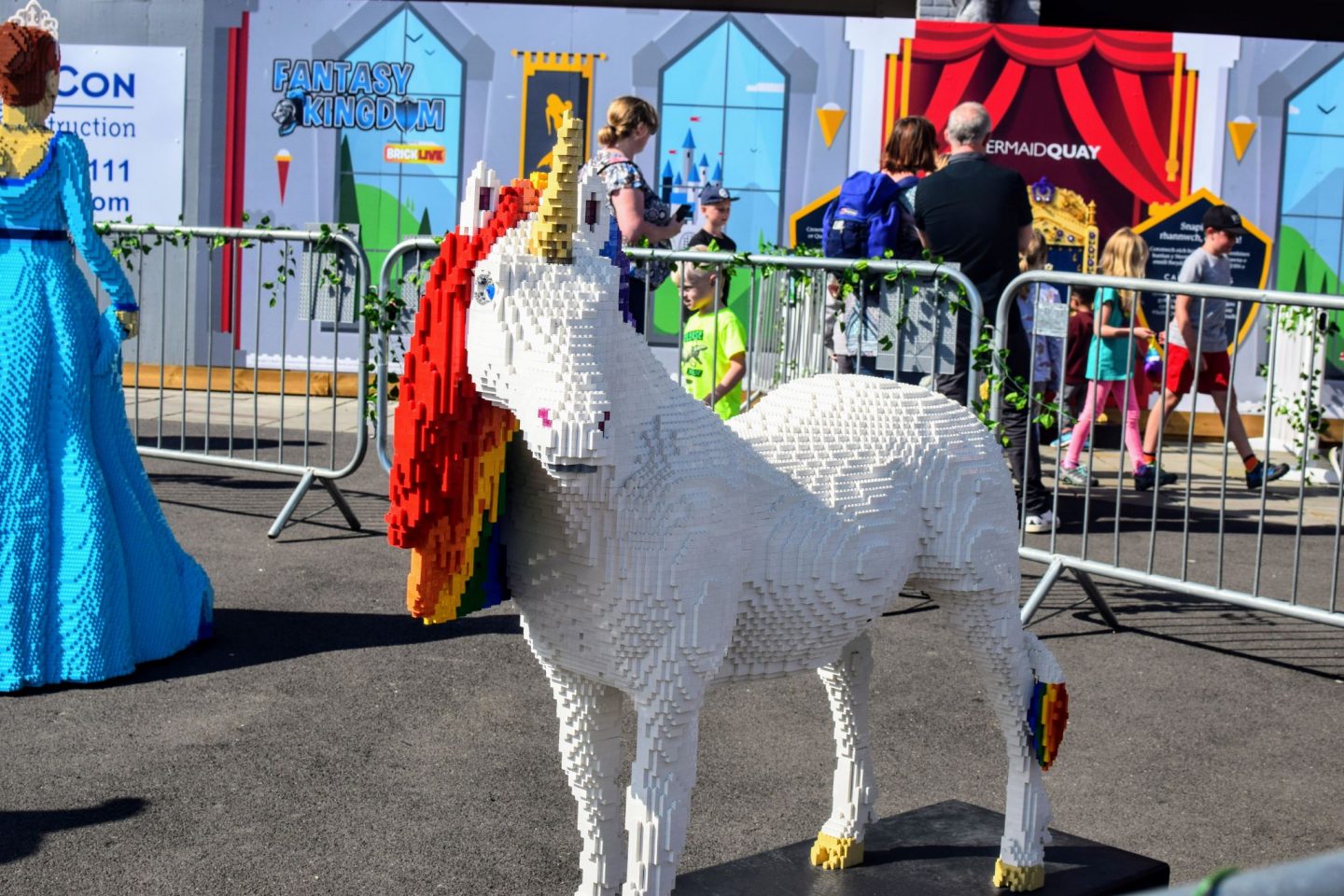 “According to legend, the unicorn is the strongest of all animals and our unicorn, Brilliance, is a magical, mystical creature whose power resides in her horn.”

Brilliance the Unicorn was my favourite creation- which is yours? 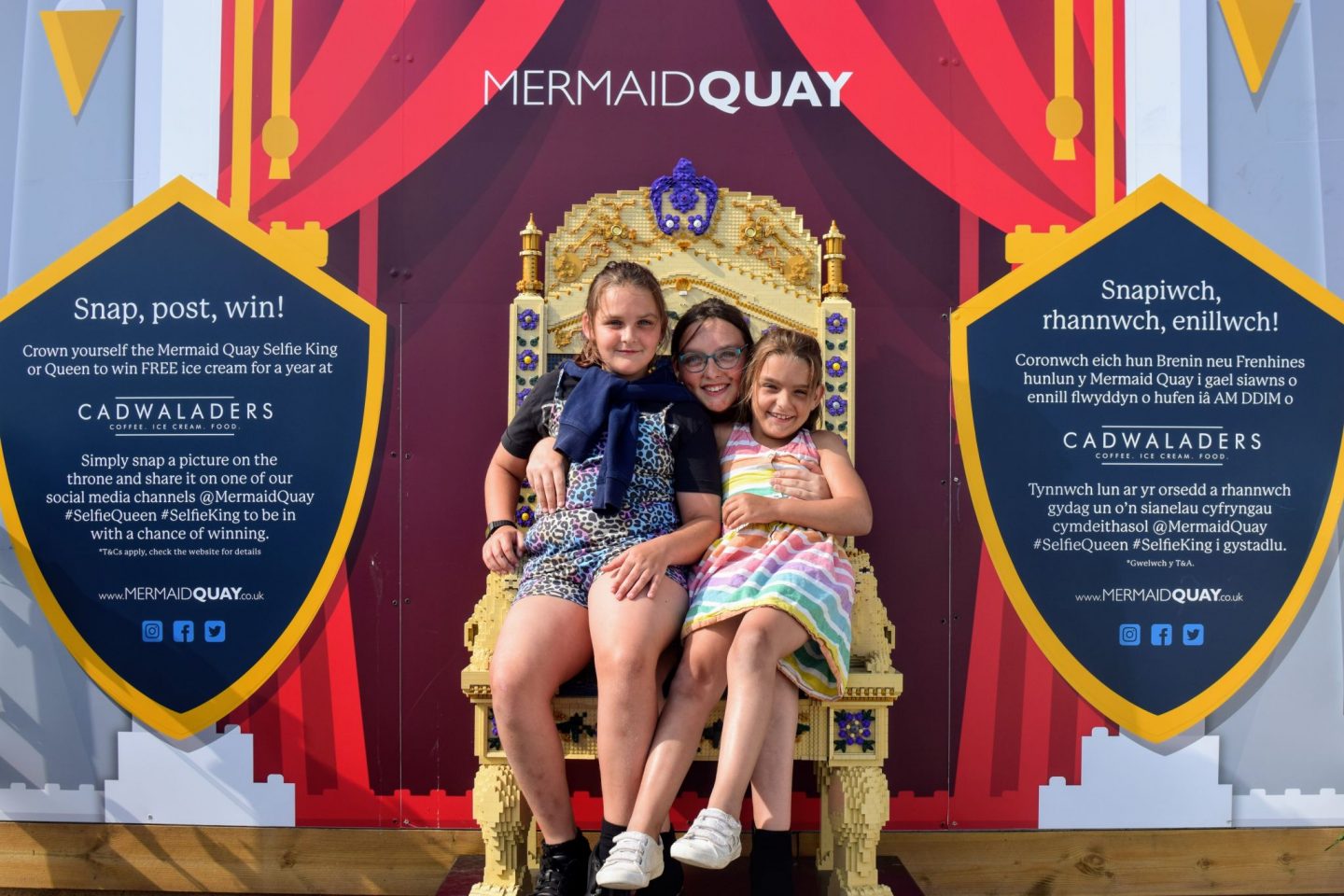 The girls also had the chance to sit on the LEGO throne- this is available to sit on between 10 – 6 so visit within these hours if you want a throne pic!  There is also a chance to win a prize for taking a selfie on the throne.  See here for more details.

There are also cute mini dragon whelps to spot in the shop windows- how many can you spot?

We had great fun visiting BRICKLIVE’s Fantasy Kingdom.  We combined this with a visit to Wales Millennium Centre but you could also visit Cardiff Bay Beach, Techniquest or the shops and restaurants instead.

BRICKLIVE’s Fantasy Kingdom will be on display at Mermaid Quay, Cardiff Bay until 1st September. 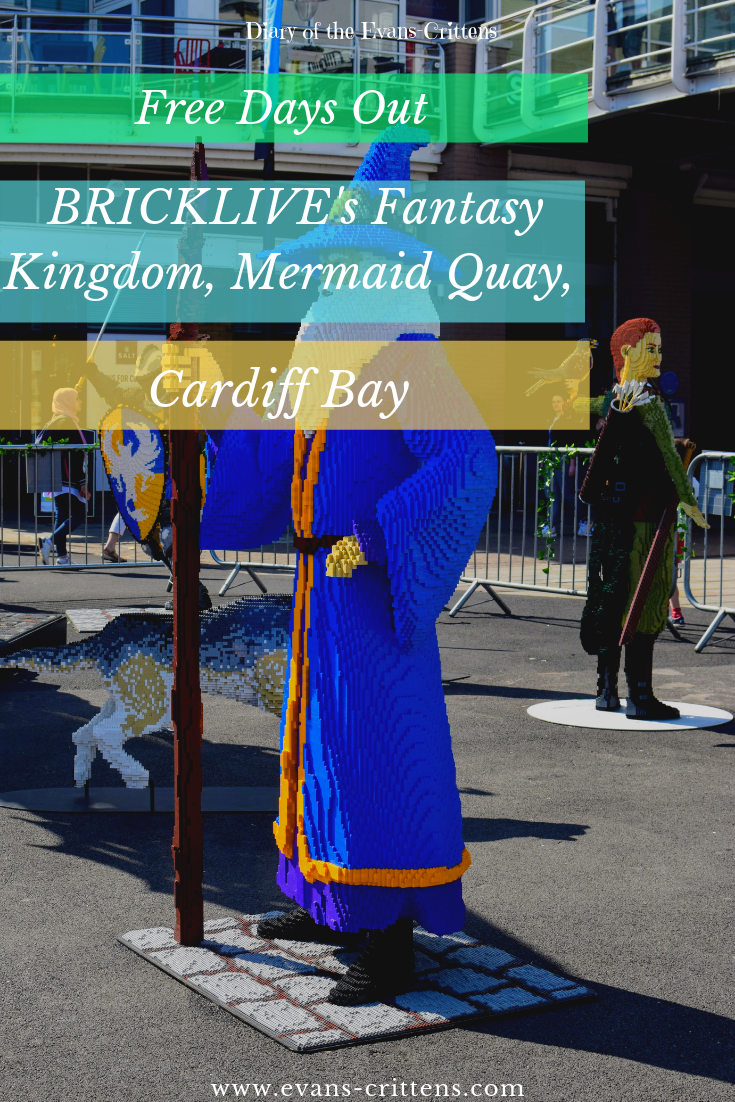