*Press tickets for the purpose of review- thanks Wales Millennium Centre!

An inspirational true story, a book, a Hollywood movie, popular play and now an award winning musical, Calendar Girls is currently on tour and playing at Wales Millennium Centre. Mum and I couldn’t wait to go along and see it. Here’s what we thought:

It Began with a True Life Story…

I still remember when the real life Rylstone WI members were all over the national newspapers and international TV with the now infamous Alternative WI calendar which featured the traditional crafts of WI- in the nude!

It began in February 1998 when John Baker, husband of Angela Baker, was diagnosed with Non-Hodgkin lymphoma. Their friend Tricia Stewart had previously joked about them making a Pirelli style calendar. After John’s untimely death they were inspired to go ahead, with the aim of raising £5000 for a blood cancer charity and having a calendar dedicated to John Baker. They achieved this and so much more.

The original Calendar Girls have now raised nearly £5 million for Bloodwise and that is only set to rise as the charity continue to collect a royalty from “Calendar Girls the Musical”.

Calendar Girls The Musical on Tour

Calendar Girls – The Musical by Gary Barlow and Tim Firth is the award winning production based on the true story of the calendar girls – a group of ordinary ladies who achieved something extraordinary. This marvellous musical comedy which received fantastic five star reviews in London’s West End now comes to Cardiff with an all star cast, starring Sarah Jane Buckley, Sue Devaney, Julia Hills, Judy Holt, Lesley Joseph, Lisa Maxwell and Rebecca Storm.

The musical opens quietly with Phil Corbitt (as John) setting the scene, quite literally, with the opening number “Yorkshire”, I loved Robert Jone’s gorgeous set design of the rolling Yorkshire hills, it’s made me long for a visit to the picturesque dales!  The song sums up the daily and seasonal rhythm of everyday village life and introduces us to the characters in the show.  I found it refreshing to watch a musical set in “normal surroundings” and everyday clothes.

The musical soon livens up and we are drawn into these warm women’s lives and  stories. But Calendar Girls the Musical is not just about the women, in this version we see more of the other characters involved in this story- the husbands and the children which adds a new dimension to an otherwise well known plot.

The show is about  women, friendship, family, teenagers, love, parenting, reputation, body confidence, getting older, illness and … death. John’s death is portrayed so emotionally.  It made me cry in one breath and laugh in the next as the show is full of such humour.  It’s also about determination and a great example of how great things happen when good people work together.

The story of each “Calendar Girl” is interwoven into the musical with a song.  These included, “Mrs Conventional”, “I’ve Had a Little Work Done”, “Who Wants a Silent Night” and “My Russian Friend.  Stand out numbers for me include:  “Scarborough”,  “Very Slightly Almost”, “What Age Expects”, “Kilimanjaro” and “For One Night Only”.

In “Scarborough” Sarah Jane Buckley (Annie) takes us through her and John’s relationship in a poignant ballad.  The reminder that these precious everyday moments of life will one day be no more was very emotional.  Again in “Very Slightly Almost” strangely it was the mention of “Tesco” that choked me as I can remember how hard it was for us to return to the shops we’d been to with my own Dad after he died from cancer.   “What Age Expects” performed by Lesley Joseph (as Jessie) is my new anthem for growing older.  It was full of powerful common sense and advice “Don’t use the lift because it’s there, don’t act the colour of your hair – act the colour of your heart!” that I will definitely take with me.  Most of all “Cut down the fools who bid you do what age expects of you…”

Buckley’s tear breaking “Kilimanjaro” paints a painful picture of the reality of grief.

“And if the girl who only bakes the cakes can cope
With getting wedding rings back in an envelope
A day will come to say ‘okay, the sun has set’

It is sang so beautifully and emotionally and with such a quiet power.  I was in awe of her wonderful vocal ability which showed no bounds during the performance, especially when she held the last note for seemingly forver  and still ended with a flourish.

“For One Night Only” takes us through the famous scene that we were waiting for- shooting the calendar.  This scene had me in tears too.  The support and camaraderie between the characters but also the actresses on stage gave me goosebumps.  It was such a cleverly choreographed  sequence with lots of surprises and yes it does include the wonderful line:  “We’re going to need considerably bigger buns!”

In the musical the ladies of Knapely WI are fundraising to buy a new sofa for the relatives room at hospital.  The end scene when they achieve their dream and so much more is absolutely beautiful.

“Like a sunflower following the sun, won’t give up until it the day is done.”

The cast of Calendar Girls the Musical are incredible- there were so many of my favourite actors and actresses from over the years in this performance.  Between them they’ve been in too many shows, films and plays to mention so forgive me for just mentioning my personal favourite characters that they’ve played:

Sue Devaney plays Cora, a single mum and daughter of a vicar.  I always think about Devany as being “Kevin Webster’s” sister Debbie in Coronation Street even though she left when I was just five!  I’d actually rewatch the soap if she returned as she’s such a watchable actress, I love her strong Rochdale accent.  My absolutely favourite character she played was big sister, “our Rita” in 80’s TV show Jonny Briggs and of course she was also amazing in Victoria Wood’s “Dinner Ladies”.  Sue describes herself as “an actress who can belt out a tune” and she can certainly does that in her spunky performance of the  jazzy number “Who Wants a Silent Night?”  It was an uplifting moment in the show.

Julia Hills returns as Ruth.  I loved Hills as Rona in 2point4 Children and also in Outnumbered.  She was recently seen  in Eastenders as Morag the choir leader.  At first we see Ruth as a timid and eager to please character but throughout the show she blossoms.   In “My Russian Friend and I” Julia delivers the painful lyrics perfectly while also playing her shoot routine a little worse for wear with impeccable comic timing .  At the end of the show, when Ruth fully flowers and triumphs, we are all rooting for her.

Lesley Joseph is brilliant as the Guardian reading, retired headteacher, Jess who agreed to strip off for the calendar on the premise that there are no “front bottoms!”.  Lesley will always be loved for playing Dorien Green in Birds of a Feather.  She’s also had a varied theatre career, most recently playing Miss Hannigan in Annie.  She wowed fans during her time on Strictly Come Dancing – I would love her energy and figure! As I mentioned earlier I loved her strong performance of “What Age Expects” and her funny one liners.

Lisa Maxwell plays Lisa the ex air hostess who’s “had a little work done“.  Lisa has had a long, varied career but I most remember her from The Bill and Loose Women.  She is such a bubbly bottle of pop.  She recently played Judy Garland in “End of the Rainbow”.  I think she’d make a great “Doris Day”.

Sarah Jane Buckley is moving as John’s wife Annie.  Sarah Jane is best known for playing Kathy Barnes in Hollyoaks and she has had a busy theatre career as well as being an award winning solo singer- not surprising with that powerful voice.  Sarah Jane portrays the grief of losing someone so touchingly, it’s an emotional performance.

Rebecca Storm plays Annie’s big-hearted, impulsive best friend Chris.  Rebecca is one of the most popular leading ladies in musical theatre, starring in Blood Brothers, Evita, Les Miserables, Chess, Aspects of Love, Piaf, Annie and Hello Dolly!  Rebecca portrays Chris’ warmth, enthusiasm and vulnerability perfectly.  I related to her struggles as a parent to a teen boy while also maintaining a true to herself life of her own.

Phil Corbitt plays Annie’s husband John, salt of the earth, national parks officer.  Phil had the audience in tears as he got up out of his wheelchair, donned his flatcap and walked off stage to signify the death of this kind, well humoured man.

Sebastian Abineri, Alan Stocks and Ian Mercer play the supporting husbands.  I love their humour and the encouragement they offer their wives.  They really come into their own in their musical number, “Girls (Reprise)”.   I had no idea Ian Mercer was in the show until I heard his distinctive voice.  Mum immediately recognised him as “Gary Mallet” from Coronation Street.  Interestingly, his wife, “Judy Mallet” was played by Gaynor Faye who was of course one of the original stage Calendar Girls.  I am so excited about his upcoming film Peterloo as it also stars Maxine Peake.

Judy Holt, from At Home with the Braithwiates, Cold feet and Hollyoaks plays Marie, the bossy Chair of the WI. Claudia Bradley and Ellie Leah play the quiet sisters “Miss Wilson” and “Miss Wilson”.  Another well known face, Pauline Daniels plays “Lady Cravenshire” and “Brenda Hulse”. Derek Elroy plays “Lawrence”, the hospital porter and photographer.  In real life the photos were photographed by Terry Logan, a local artist and husband to one of the original Calendar Girls.  Since the alternative WI calendar, the number of charity nude calendars has increased, it’s now become the norm but I haven’t seen one as beautifully shot as Logan’s Calendar Girls yet, it’s stunning!

Isabel Caswell, as “Jenny”,  Tyler Dobbs as “Tommo” and Danny Howker as “Danny” all have great talent.  I loved the double act between Tyler and Danny as clueless friends, they had perfect comic timing and portrayed self conscious teen angst so well.  Isabel was a joy to watch as a rebel teen maturing before our eyes.  I enjoyed their musical number “Protect Me Less”.

I feel so lucky to have seen this stellar cast perform.  They were all amazing! 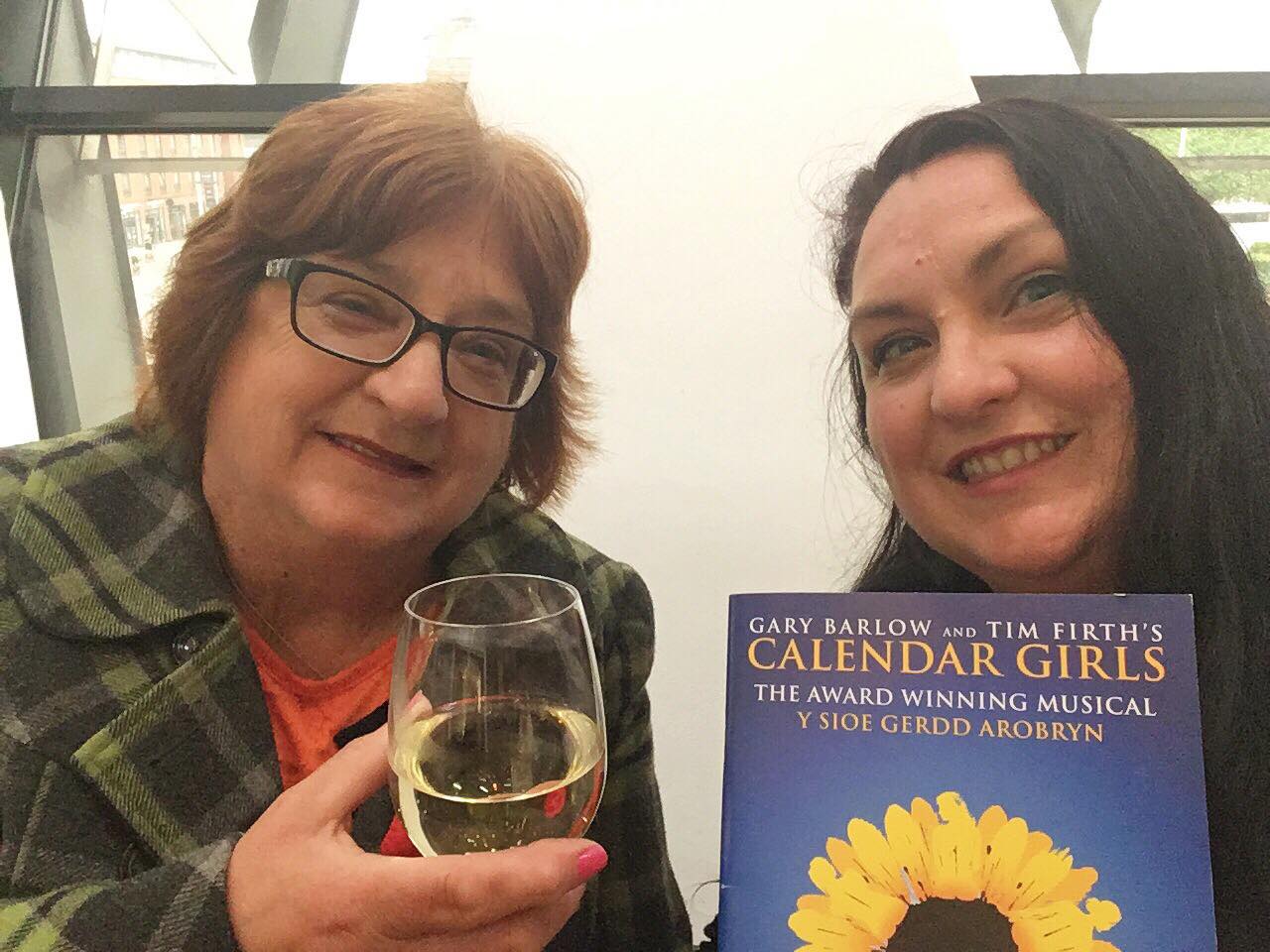 Calendar Girls The Musical was a huge hit with audience and received a well deserved standing ovation.  At the end of the show I was wiping away tears from my eyes both from crying and laughing.  As the curtain lowered, the cast were waving and I genuinely felt sad that our time together had ended, I would love to watch the show again and urge you to get along and see it for yourself if you can! 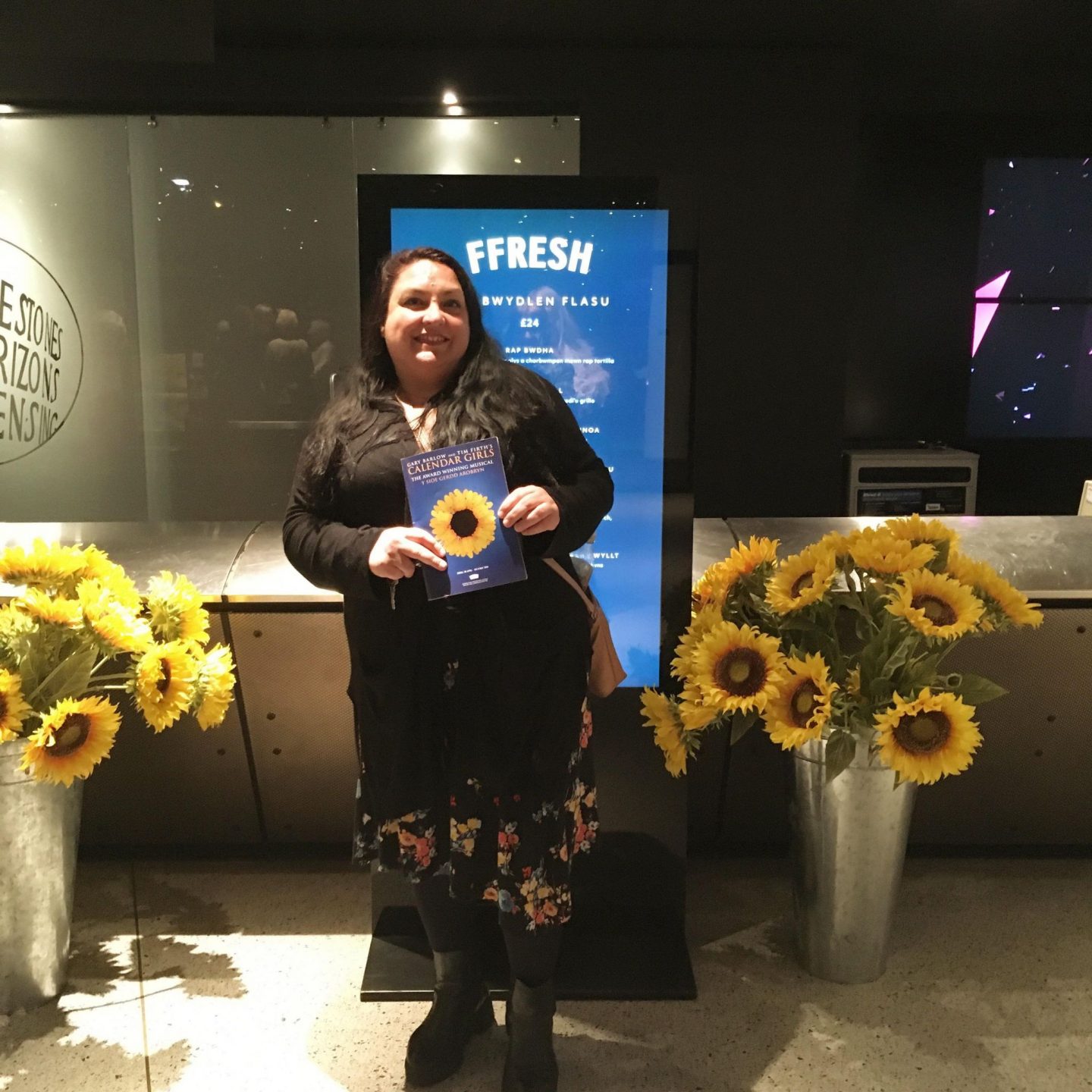 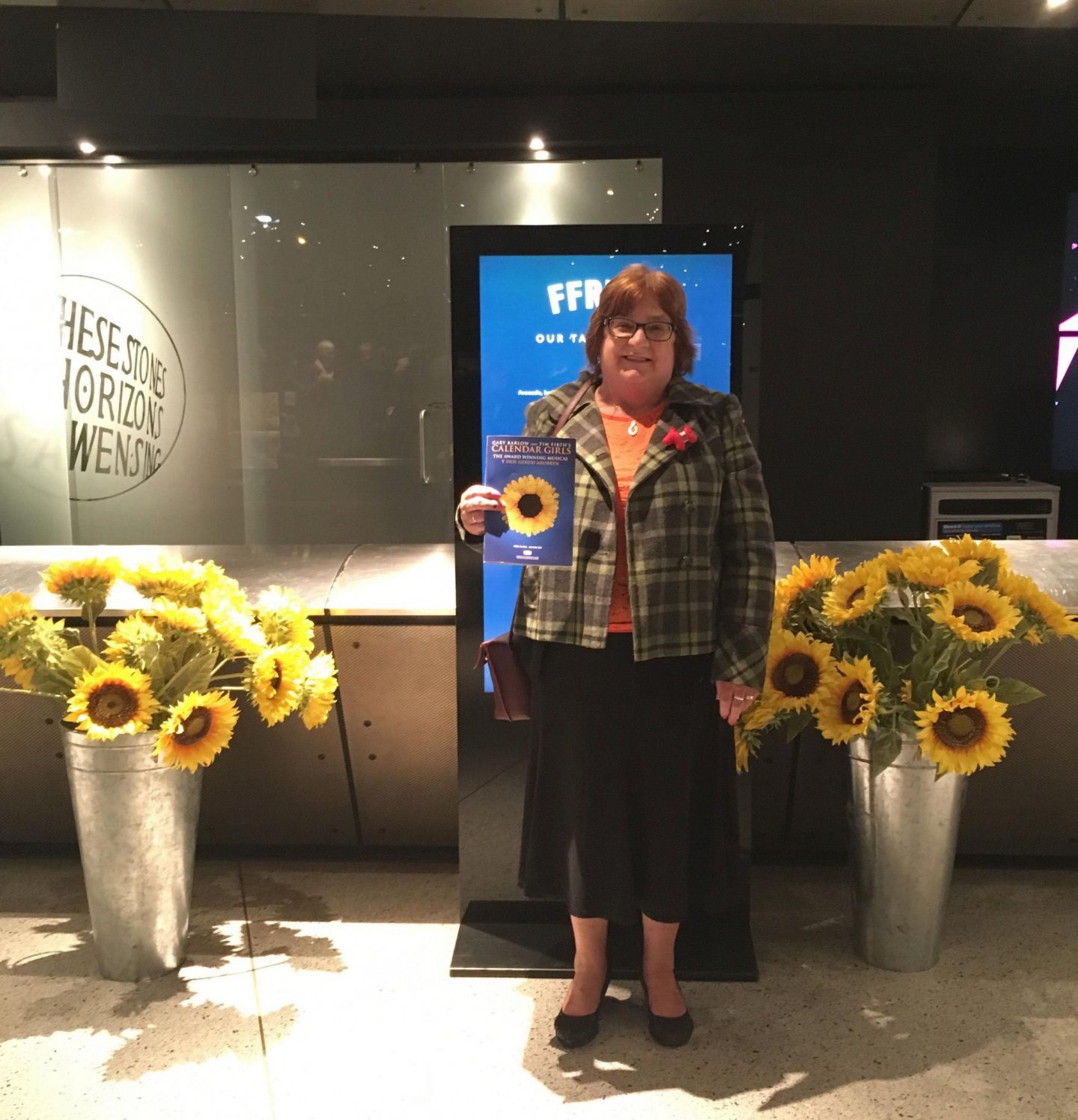 As we walked out of the theatre, with songs in our hearts and a skip in our step, we were delighted to see buckets and buckets of sunflowers in the foyer.  It was so beautiful and very touching. 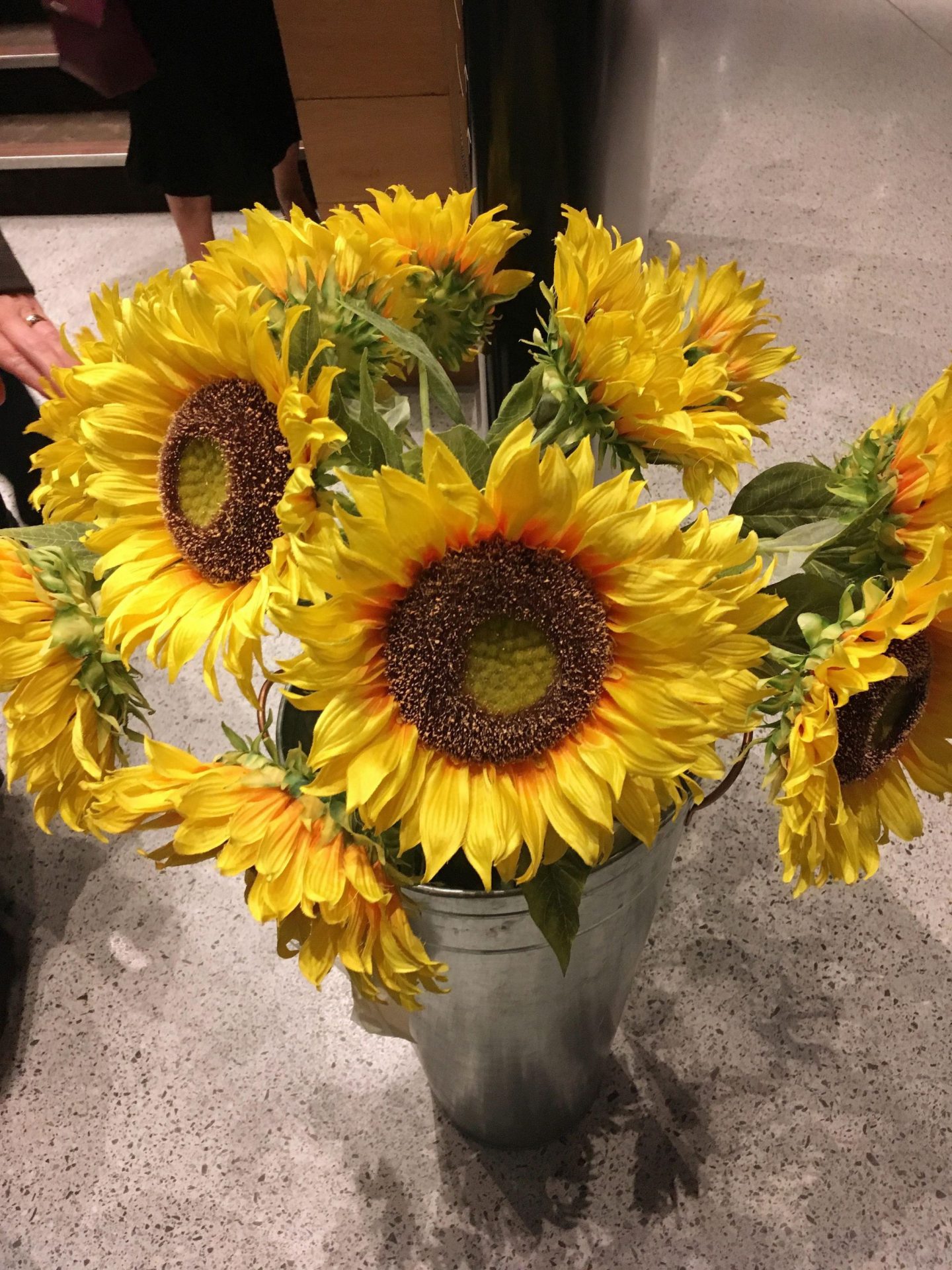 Calendar Girls the Musical has reminded me that though it’s hard, life goes on after the death of loved ones and we can make it through when others rally around us.  Great things happen when many good people come together.  It’s taught me new songs to sing (thanks for the music Gary Barlow) and made me thankful for the support I get from the women and community in my own life (as a Pembrokeshire Bluetit I can vouch for the camaraderie and laughs that occur when many women get together and take their clothes off- it’s an uplifting experience!).

Age guidance: 8+ (No under 2s) and be aware there are some teen and adult issues in the show. 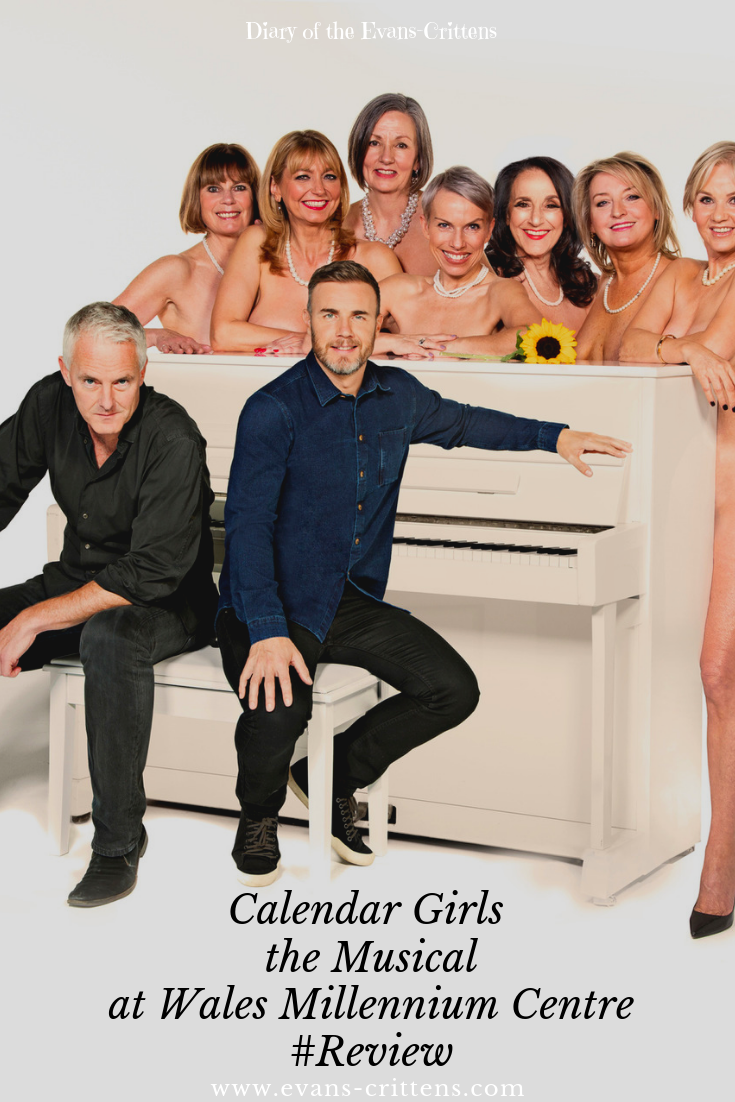