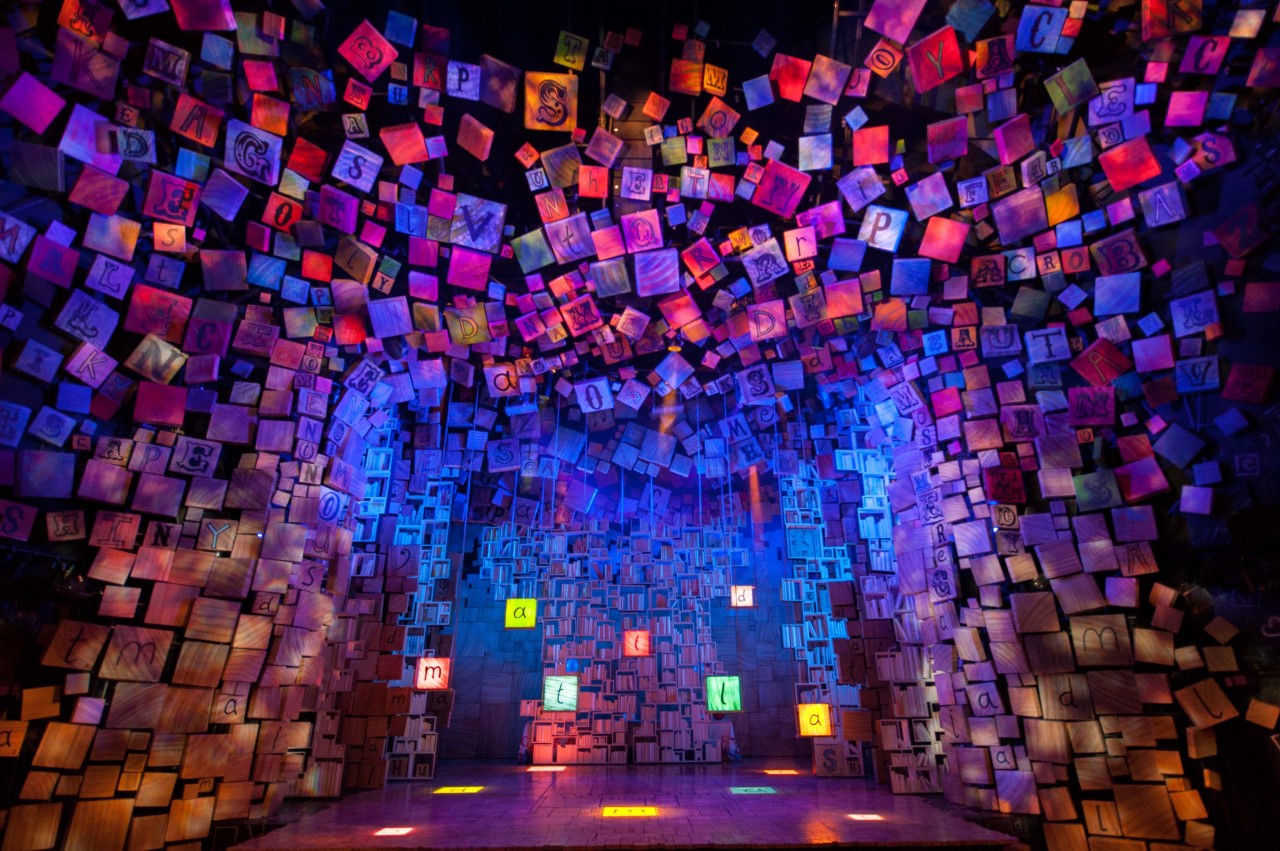 Last Thursday, Ceri and I settled down to watch Roald Dahl’s Matilda the Musical at Wales Millennium Centre, Cardiff.  We have been excited about the first UK and Ireland tour of this production coming to Cardiff for well over a year and there was a real buzz in the air as we waited for the musical adaption of one of Roald Dahl’s most loved stories to begin in the city of his birth (Dahl was born in LLandaff), bringing it’s magic this Christmas.

The set is incredible and perfect for a show with a book lover at it’s heart.  As we waited for the show to begin we began to spot words made from the varied letter blocks on stage, from Acrobat to Matilda and the  “letter’s, words and books” theme continued throughout the show.

Seen by over 8 million people and the winner of over 85 international awards, Matilda The Musical is the multi-award winning musical from the Royal Shakespeare Company, inspired by the beloved book by the incomparable Roald Dahl.

With book by Dennis Kelly and original songs by Tim Minchin, Matilda The Musical is the story of an extraordinary girl who, armed with a vivid imagination and a clever mind, is determined to change her own destiny, even if it means being a little bit naughty. 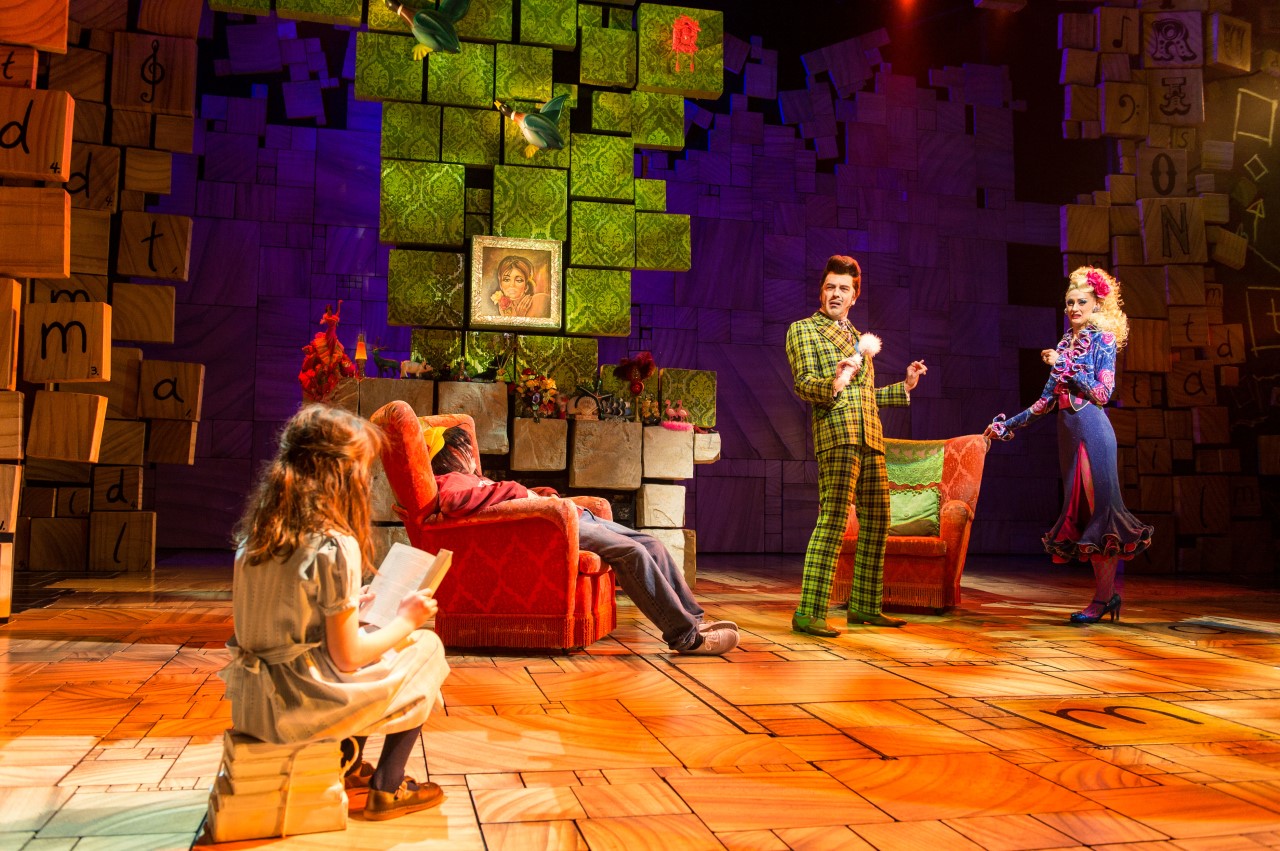 The harsh realities of Matilda’s neglectful childhood are made clear from the start during the upbeat musical number “Miracle”.  In stark contrast to the doting parents and much beloved children, “My mummy says I’m a miracle, My Daddy says I’m his special little guy…”  Mrs Wormwood (Rebecca Thornhill) is shown begrudgingly (and yet humorously- “Oh, bloody hell!”) giving birth while wishing she was instead competing at “The Biannual International Amateur Salsa and Ballroom Dancing Championship” in Paris.  Thornhill is incredible in this role and I had soon forgotten about the bingo loving film version of Mrs Wormwood, although I doubt I will ever forget Mrs Wormwood singing about her “smarting front bottom” after childbirth.    By the end of the scene I already had a tear in my eye as sweet voiced Matilda sang, “My mummy says I’m a lousy little worm, My daddy says I’m a bore…“

Thankfully, just like in the book and film version, our heroine, Matilda has spirit.  When she is yet again sent to her room for annoying her dodgy wheeler dealer father, Mr Wormwood (who frustratingly always insists on calling her a boy) she climbs up onto the book shelf above her bed and does what she loves the most- reads books.  As she reads she ponders, “The endings are often a little bit gory, I wonder why they didn’t just change their story?”  and begins to change her own.  “We’re told we have to do what we’re told but surely, Sometimes you have to be a little bit naughty…” leading to the infamous scene where Matilda pours her mother’s peroxide into her father’s hair tonic.  The song, “Naughty” is such an anthem within the musical and features words to inspire us all.

“Just because you find that life’s not fair it
Doesn’t mean that you just have to grin and bear it
If you always take it on the chin and wear it
Nothing will change
Even if you’re little, you can do a lot, you
Mustn’t let a little thing like, ‘little’ stop you
If you sit around and let them get on top,
You might as well be saying
You think that it’s okay
And that’s not right!
And if not that’s not right
You to put it right”
During our performance Matilda was played flawlessly by Scarlett Cecil (there are six girls playing the lead role in rotation during the tour).  They certainly need a big brain and special powers just like Matilda in order to remember their lines, choreography, songs (which they sing beautifully by the way) and to speak in Russian!  The audience were in awe. 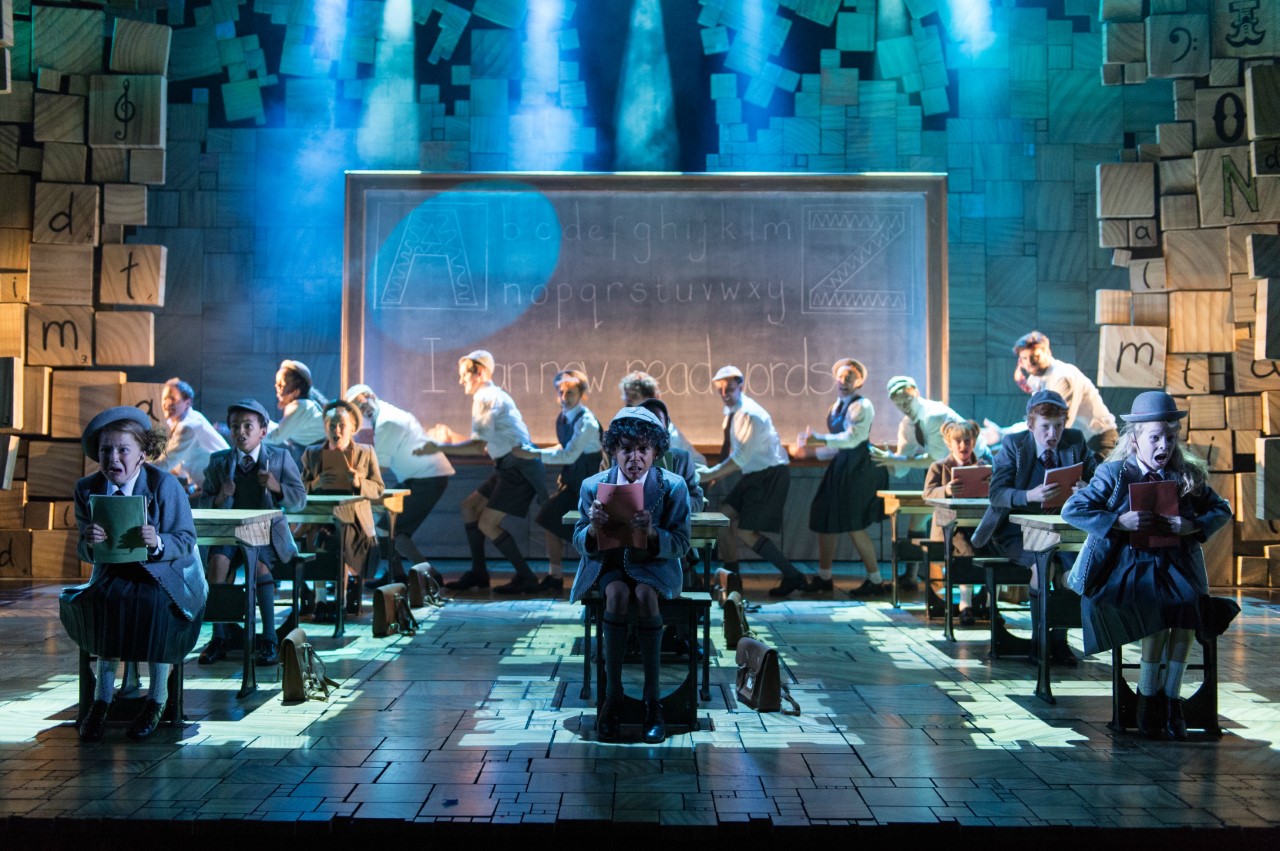 When Matilda is sent to school the set darkens as we visit “Crunchem Hall”, the chorus sing an ingenious song that features all the letters of the alphabet in a subtle clever way.  As each letter is sang the cast slot letter tiles into the school gate.  It’s difficult to describe in a blog post just how well choreographed this scene is- the timing is impeccable and it’s just brilliant to watch, an audio visual treat.   The attention to details throughout the whole of the show are superb even down to the “Crunchem Hall” badges, designed by Quentin Blake, sewn onto each school blazer.

The talented chorus enhance each scene and adapt to their different roles seamlessly- from playing doting parents to school pupils, capturing the spirit of children down to a tee. 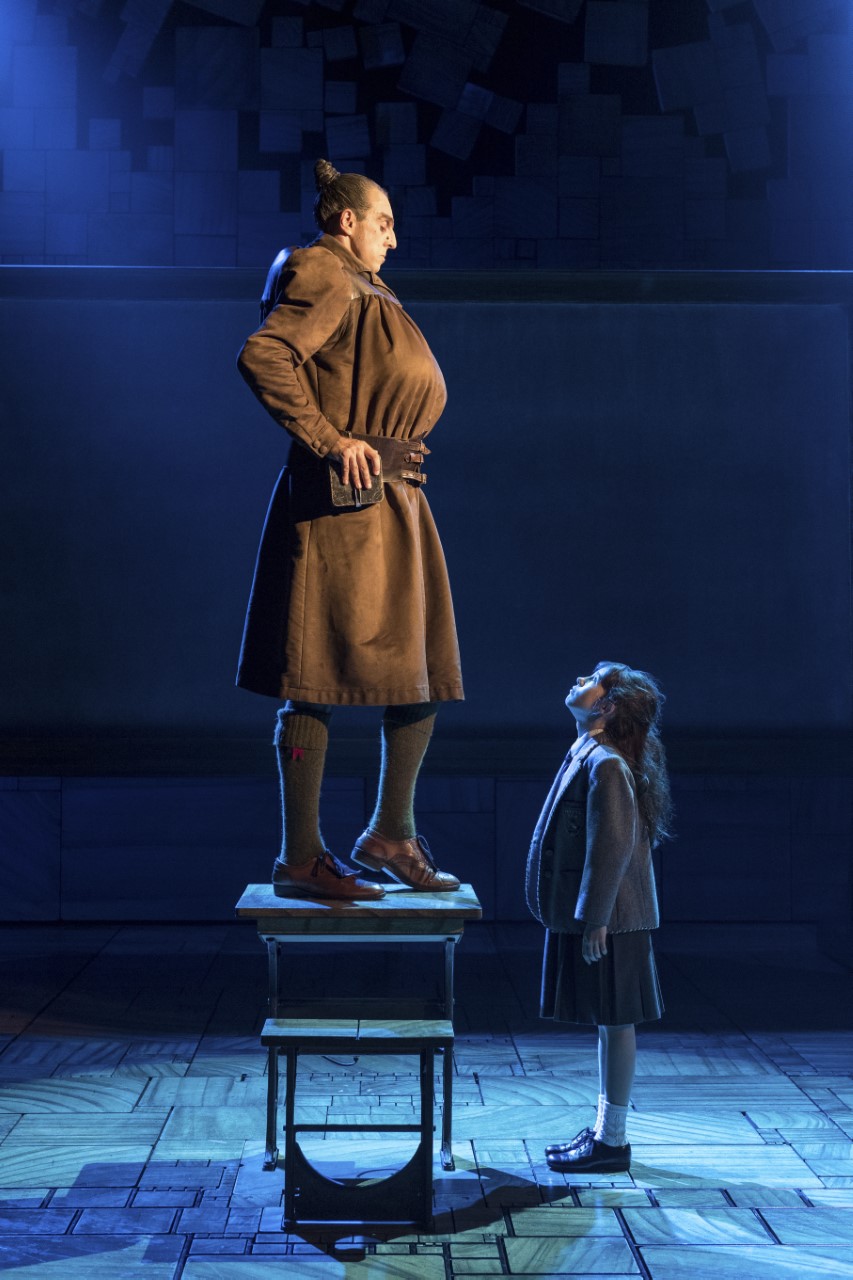 Craige Els reprises his formidable Miss Trunchball character for the tour (he  previously played this role for three years in the West End).    The Trunchball is a monstrous, hammer throwing, children hating , sadist.  We should hate her but her funny one liners and gleeful light-footed dancing in “The Hammer” made the audience, including myself,  laugh hysterically.   We can’t help but applaud when even with her hunchback and large frame, she manages a perfect somersault during the gym scene.   Matilda the Musical definitely has it’s dark moments but the humour and touching moments keep it a family friendly show.

I remember the first time I read Matilda as a child, (when it was a newly published book!) how shocked (not to mention appalled)  I felt when Miss Trunchball picked up Amanda Thripp by her pigtails and began to swing her around (and around) before throwing her.  I have to admit, I was just as shocked seeing this incredible scene live on stage.  All credit to Craige Els and Jessica Chalmers as they need to execute this stunt perfectly for it to work and they do (with the help of a harness, special effects and lighting).  Amanda appears to land with a thump back onto the stage, then lo and behold we are cheering wholeheartedly as Amanda arises in triumph, unharmed from this “throw”.  I would love to watch this scene again! 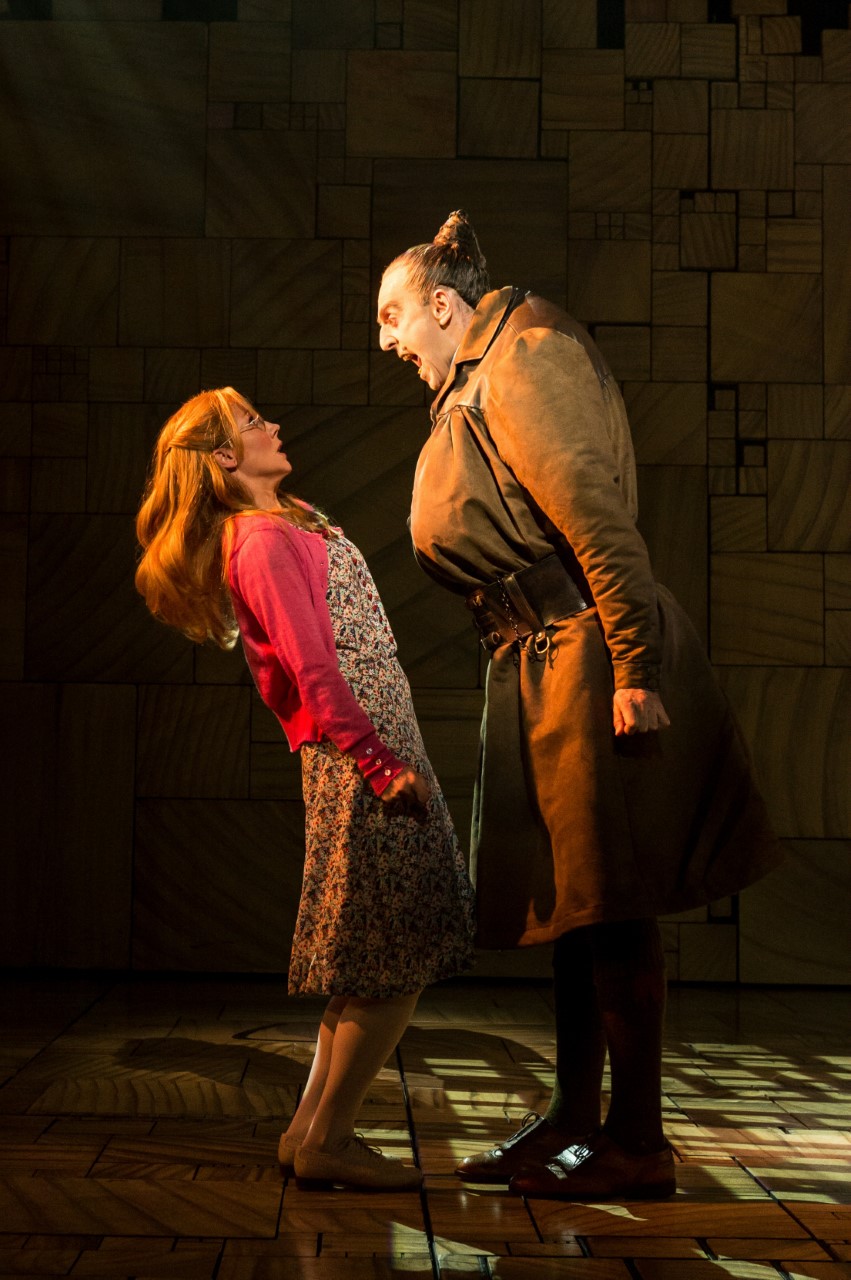 Thankfully for Matilda, she finds solace in Miss Honey, her kindhearted school teacher.  Carly Thomas plays this timid role in a quietly powerful way.  She has never found the courage to stick up for Miss Trunchball.  In her own words, she’s “pathetic“.   But she needs to be brave for Matilda, “this little girl, this miracle.”  Matilda has another ally in the comforting, Mrs Phelps, played by Michelle Chatelle Hopewell.  She encourages Matilda’s  love of books and storytelling.  An interesting point to note is that whereas the film version of Matilda talks bluntly about her parents behaviour, “She doesn’t know I come here; our theatre version lies and heartbreakingly tells Mrs Phelps that they are proud of her and love her as she wishes they really would.

Bruce and the Chocolate Cake

Before the end of Act 1 Miss Trunchball discovers that Bruce ( Cuba Kamanu) has stolen a slice of her beloved chocolate cake.  Her punishment is to make him eat the rest of the enormous cake.  My one tiny criticism of the show is that I wanted the cake to be bigger (sorry Bruce!).  As cook exits the stage scratching her bum, cue more laughter, it’s clear that it’s not going to be an easy cake to stomach but with the support of his class mates, Bruce triumphs over the cake and Miss Trunchball.

Mr Wormwood (Sebastien Torkia), accompanied by poor Michael Wormwood (Matthew Caputo), Matilda’s brother, gets to shine during the interval comedy act (where he warns parents not let to  their children attempt any of the disgusting behaviour seen in the show- such as reading!) and the opening of Act 1’s musical number “Telly”.  Every music needs an “Oom pa pa” song and in Matilda this rousing performance  is it.

“All I know, I learned from telly!
The bigger the telly, the smarter the man.
You can tell from my big telly
Just what a clever fella I am!”

In regards to the character of Michael, I felt so sorry for him and came away still thinking about his character after the show had ended.

When I Grow Up

“When I Grow Up” is one of the most beautiful scenes in Matilda that encapsulates childhood.  It begins quietly with just two children on the swings hanging from the stage ceiling.  As more children join in and soar on their bellies high into the crowd, my heart leapt just as if I were on the swings with them.  It hits his climax as Miss Honey sings, “When I grow up, I will be brave enough to fight the creatures , that you have to fight beneath the bed, each night to be a grown up...” and Matilda responds with her encouraging lyrics from “Naughty”

“Just because you find that life’s not fair
It doesn’t mean that you just have to grin and bear it
If you always take it on the chin and wear it
Nothing will change.“

There is a twist in Matilda the Musical about the backstory of Miss Honey’s parents but I’ll save that to be a surprise when you watch the show.  Matilda’s special powers are touched upon less during the musical and an additional scene to really show them off would be appreciated if it could be pulled off.

The Smell of Rebellion

As the children decide to join forces and take revenge on Miss Trunchball, Matilda’s self appointed “best friend”, Lavender (Chantelle Tonolette)  comes into her own as she talks confidently to the audience, therefore letting us be part of the rebellion too.

During the show we are warned that  not every  story has a happy ending.  Will Matilda manage to change her story and create a happy ending?  You’ll have to watch the show to find out.  But I’m sure every child and adult walking out of the show left mindful of the words:  “Nobody but me is gonna change my story…” and inspired by Matilda to stand up for themselves in the future:

Even if you’re little, you can do a lot, you
Mustn’t let a little thing like, ‘little’ stop you
If you sit around and let them get on top,
You might as well be saying
You think that it’s okay
And that’s not right!
And if not that’s not right
You to put it right

We wholeheartedly recommend this musical for families- I can’t wait to take my own children!  There are rumours that a film version of the musical is on the cards too which would be absolutely amazing!  I for one have my fingers crossed!

Roald Dahl’s Matilda the Musical is at Wales Millennium Centre until 12 January. Limited tickets are available.  Book online here or call the box office on 029 2063 6464.  A limited number of £5 tickets for 16 – 25-year-olds will be available from 10am on the day of each performance. 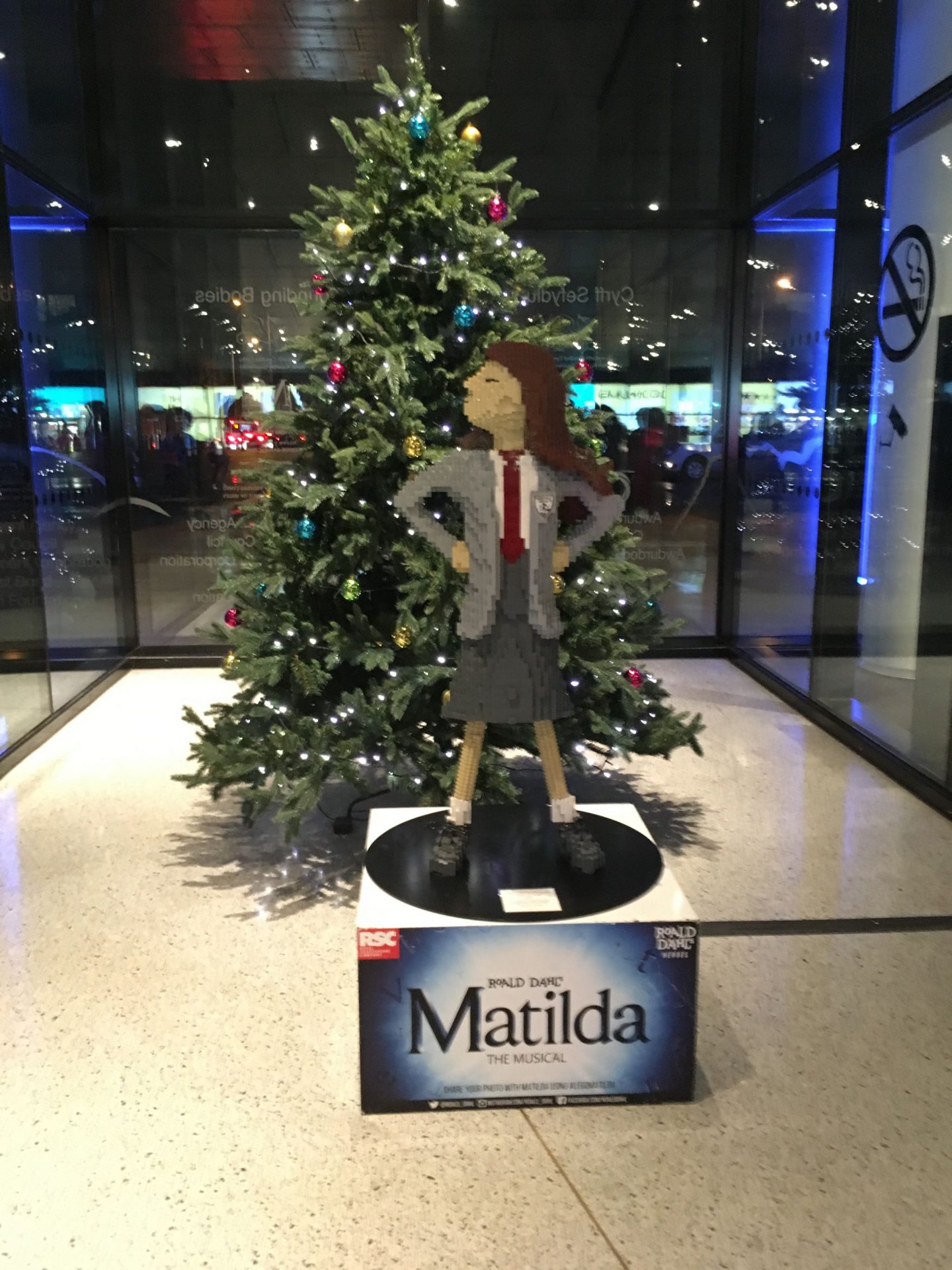 Don’t forget to look out for the LEGO Matilda Sculpture in the foyer as she is also on tour with the production!  Take a walk around and you will also spot Charlie, James, George, Sophie and Billy LEGO sculptures.

Thank you to Wales Millennium Centre for providing two tickets to press night for the purpose of this review. 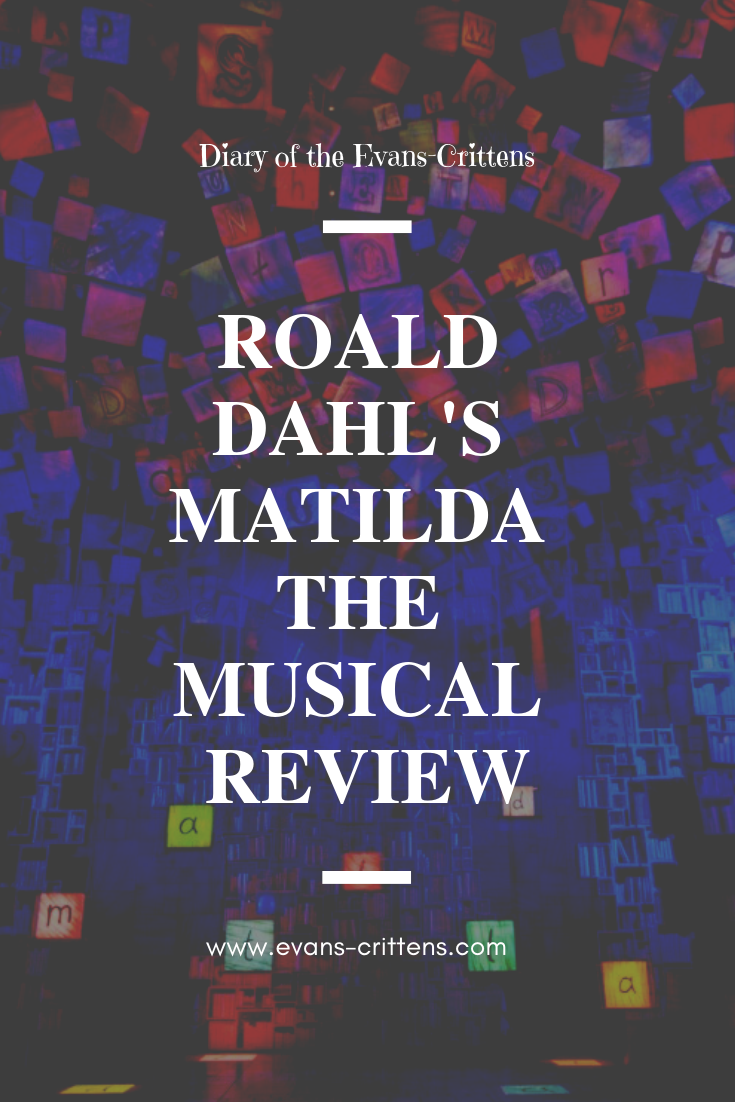