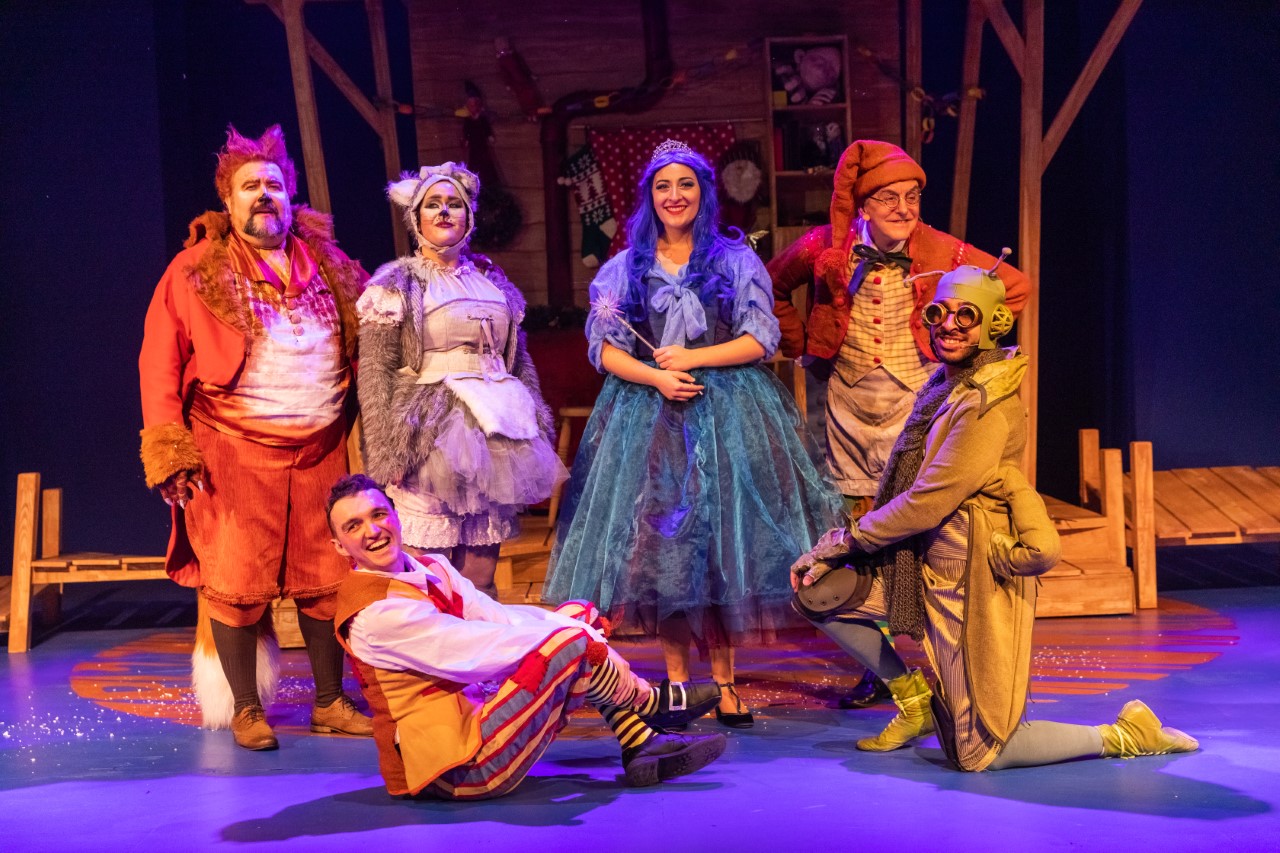 Mum and I got into the Christmas spirit last week when we attended Pinocchio, this year’s Christmas offering at the Torch Theatre, Milford Haven.  It was lovely to see children from the local schools awaiting the start so eagerly.  They were dancing to Christmas tunes in their seats and we could see that the whole experience of going to the theatre at Christmas time was a delight for them from start to finish. 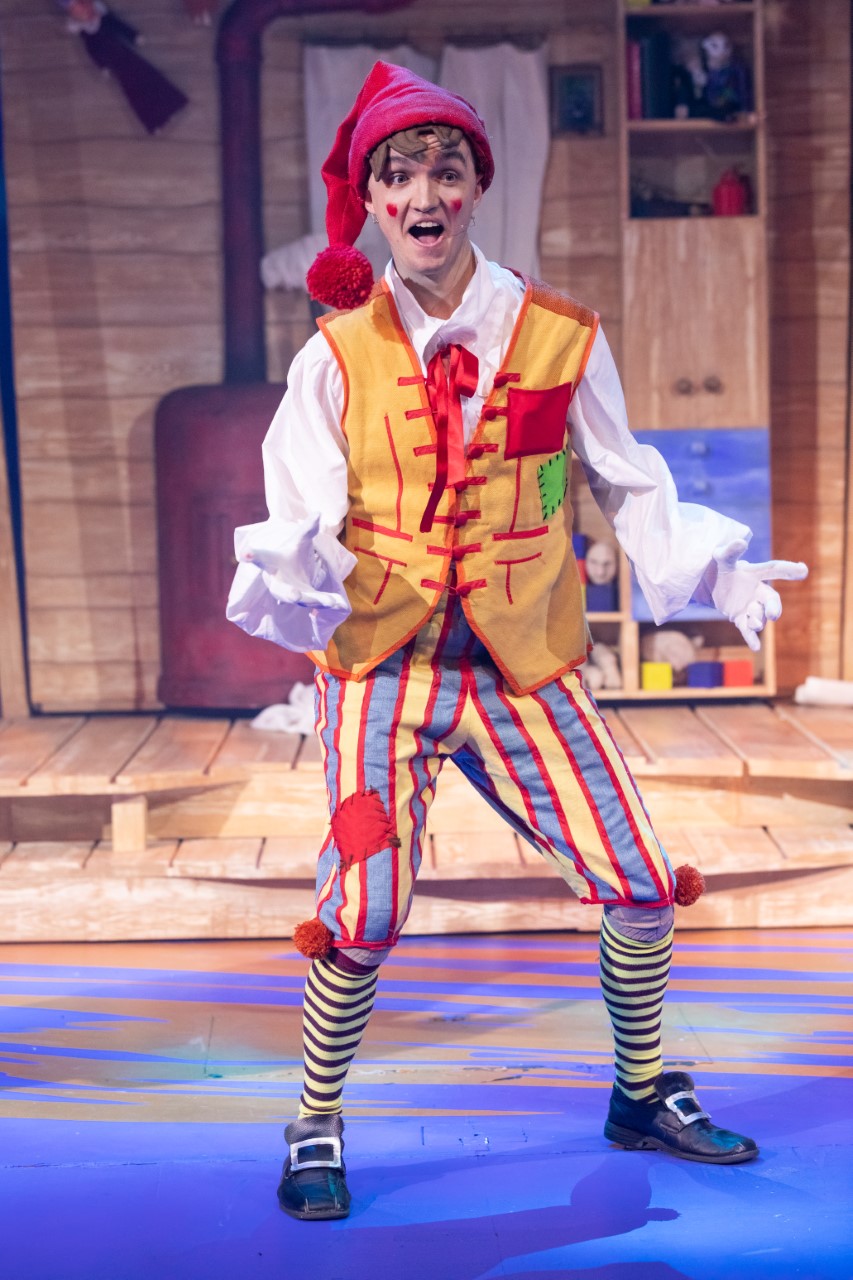 Pinocchio tells the magical story of the little wooden puppet who longs to be a real boy.  In this version, writer (and Artistic Director) Peter Doran, along with director James Williams, has stuck closely to Carlo Collodi’s original:

“Pinocchio is a classic tale loved by generations throughout the world. James and I have collaborated on shows for 20 years and I think this is one of our favourites; pantomimes are often about the personalities and the slapstick so it’s lovely to get back to a story with real depth and meaning. It’s a very colourful show and James has written some fabulous songs – it will be a real treat”

The show begins with Jodie Miccichè playing our narrator and also young Gepetto’s wife.  The sad tale of Gepetto’s loss is told sympathetically and beautifully.  Miccichè’s main role in the show is as the mysterious blue haired Gypsy (our version of the Blue Fairy) and she does this so well with the air of part princess, part fairy nymph- she weaves  magic into each scene with her mesmerising singing voice.   During the interval I heard a teacher ask her pupils if they were enjoying the show.  They all unanimously replied “Yes!” and one of them added “I love the blue haired fairy, she is beautiful and has a lovely voice.”

Dudley Rogers plays Gepetto (and also Ravenelli) soundly, we now see him as a poor, old, lonely man.  He invites us into the show  as the children playing on the water, but warns us to be wary of sharks. Sadly his puppet making days are over and he spends his time trying to fish for food (not very successfully).  He is very hungry.  We see Gypsy begin to spread her magic with a special piece of wood that could be made into a heart for one of his puppets and the well loved folktale begins.  With a spin, the set transforms into Gepetto’s workshop.  Underneath a dust sheet we find our story’s hero, Pinocchio, a lifeless puppet.  With a lot of love and a wooden heart, Pinocchio is suddenly alive and the audience cheer.  This cheering soon turns to hysterical laughter as poor Pinocchio (played by Will Taylor) comically begs for more oil.

Pinocchio’s sidekick Cricket (played by Kayed Mohamed-Mason) pops up from the floorboards and Pinocchio sets out to try and become a “real boy” but soon encounters problems along the way.  Mohamed-Mason also plays Lampwick, an unruly but likeable boy who encourages Pinocchio to skip school.  The children in the audience loved it when Pinocchio and Lampwick ran up and down the theatre aisles. 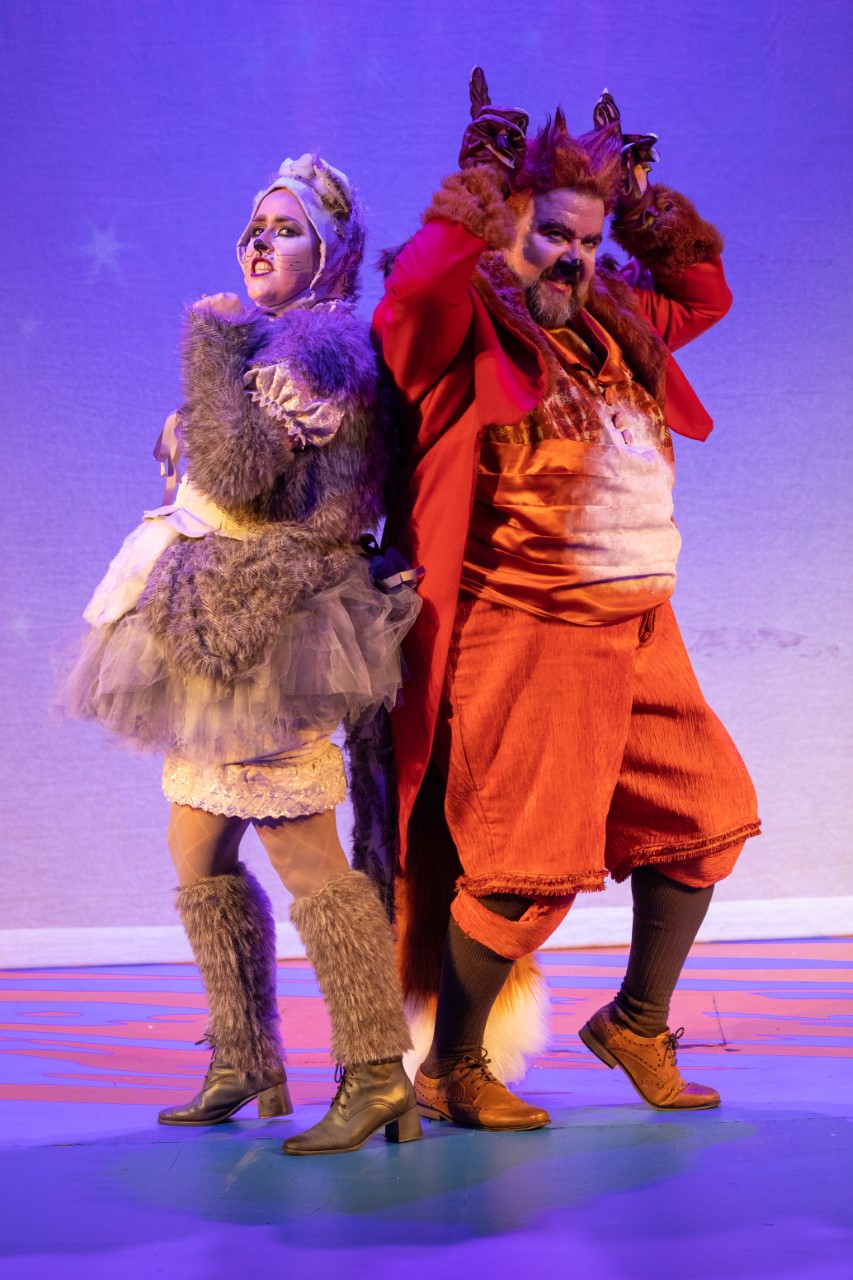 Two other characters out to cause trouble for Pinocchio are Freddy Fox (played by Dion Davies) and Felina (played by Emma Hirons).  The comic pair were amazing as pantomime baddies that we love to hate (and “Boo!”)  They brought a lot of fun to the stage with their song, “I’m Foxy!”  Davies plays Freddy Fox superbly with a touch of Fagin but I admit I did miss seeing him as a classic pantomime Dame this year.  There’s a certain pantomime naughtiness that only a Dame can  get away with (there is after all “nothin’ like a dame!”).  Hirons was very lovable with her feline ways and we were all so happy when she came over to the good side!  Their costumes (Helen Rodgers) were incredible.

In a show about a puppet there was bound to be a puppet show and it was great in the “Theatre” scene to see the cast operate the hand made puppets and tell a story within the pantomime.  You can never have  too many stories.

Pinocchio is a bright, colourful show but there is of course a dark element.  Encouraged by Lampwick, Pinocchio goes off to Toy Town.   Set Designer Sean Crowley alongside Ceri James (Lighting Designer) did a fantastic job creating the eerie set – imagine Stephen King’s It crossed with Banksy’s Dismaland.

Remember the sharks that Gepetto warned us about?  Pinocchio and Gepetto ultimately end up inside a shark’s stomach, this scene is creatively imagined using a projector. When I was a child, I remember it was always more exciting if there was a flying scene within a pantomime.  Pinocchio provided this element with an extraordinary swimming scene- it was wonderful to see the children’s faces as Pinocchio swam (and sang!) around the shark’s belly.

In true Pantomime style there was a happy ending.  We had triumphed over evil with our “Boos” and “Hisses” and good won the day!  We celebrated with lots of cheering and another song.  During the pantomime there was a song that we were all encouraged to join in with the actions, which we eagerly did.  I hope in subsequent performances they encourage everyone to get up onto their feet too as lots of the kids in the audience were itching to stand up and dance (oh okay and the adults too!).  The kids loved joining in with cries of “He’s behind you!”.  I would have liked more of this and also more local mentions and jokes  as it makes the experience so special for kids especially during the school performances.  The true critics of pantomime are the children and our audience all walked out with smiling faces- they loved it!

It’s hard to believe that the show consisted of only a cast of six!  The talent, personalities and voices  filled the stage.  The Torch Theatre have once again created the perfect pantomime for families to see this Christmas time.  Pinocchio will move you, warm your heart and make you sing and laugh out loud!  Thank you to all the cast and crew involved! 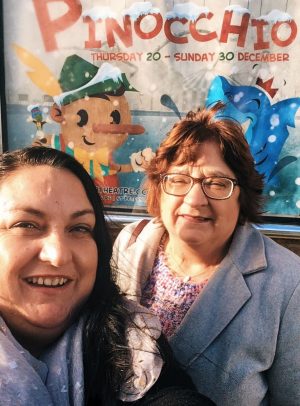 Pinocchio will run at the Torch Theatre, Milford Haven from Thursday 20 to Saturday 30 December at various times.

We were given two tickets to see Pinocchio for the purpose of this review.  All views and opinions are our own.