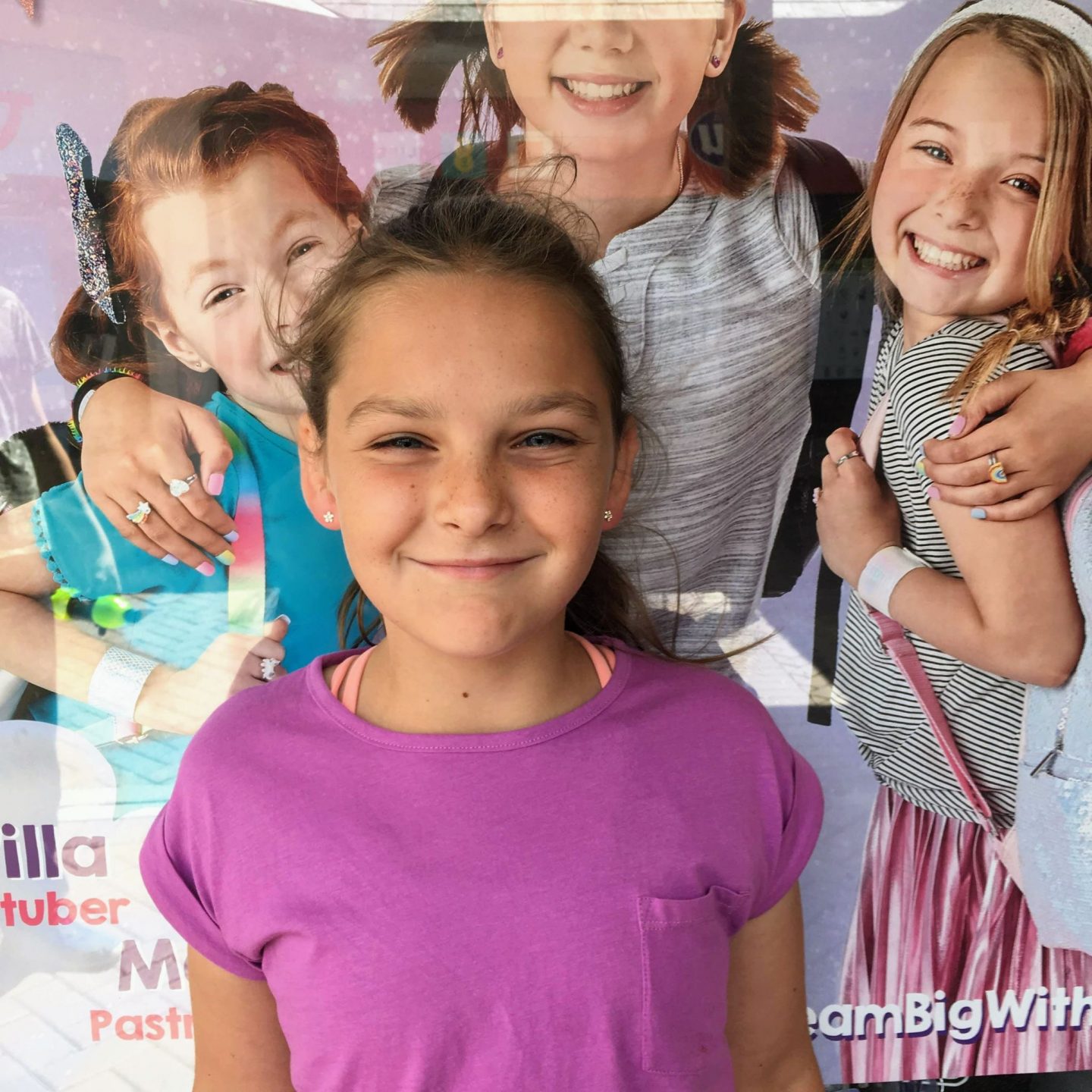 On the first official day of the holidays we  thought we’d “tick off” some activities on our “summer holiday” to do list.  Caitlyn asked if she could have her ears pierced for her tenth birthday.  I agreed and explained that she could have them pierced as an early birthday present at the start of the holidays as this would give her time go get used to them before going back to school.  So off we went to Claire’s,  just as we had done two years earlier when her older sister Rebecca had her ears pierced.

The only problem was that practically every other parent and child in Pembrokeshire had decided to get their ears pierced on the first day of the holidays too (okay, so I’m slightly exaggerating here!).  There was a long queue.  I remembered that when Rebecca had her ears pierced it was really quick so I didn’t think we’d have to wait long.

When we saw the queue I gave Caitlyn the option of coming back another day, thinking it might be quieter early in the morning.  She decided that as we were here we may as well wait.  If all the ear piercings had gone to plan it wouldn’t have been so bad but the girl currently in the chair was nervous.  As soon as the piercing instrument was put on her ears she was terrified.  I felt sorry for her and her father and it wasn’t very nice for anyone in the store to hear the (excuse the pun) piercing screams.  I have to admit, if Caitlyn was scared I would have just put a stop to it and explained to her that we’d come back when she was older and more prepared for it.  Something that is purely cosmetic should not be a traumatic experience.   But the parent persisted with the girl and eventually they managed to pierce her ears.  She was still crying as she left the store, so it was not pleasant for anyone but most of all the poor young girl in question.  I kept looking around the store seeing the “Claire’s:  We Make Memories” sign thinking well it was certainly a memorable experience.

Seeing one child extremely upset then unnerved some of the other girls and they begin to cry and worry.  All the parents were now double checking with their kids that they definitely wanted them done and they were all adamant that they did.  Caitlyn was cool as a cucumber, not scared at all and still looking forward to having her ears pierced.  We had looked online at the Starter Kits available and she had chosen Aqua Crystal Daisy, a gorgeous pair in Stainless Steel.  They were the exact shade of blue as her eyes and would have suited her beautifully.

The next child was now in the hot seat.  She stared getting upset just with having the mark drawn on her ears so you can imagine how hysterical she was by the time the piercing instrument was in sight.  Bearing in mind her mum had also been waiting a long time and was aware of the ever increasing queue behind her daughter, she began to get stressed too.  Cue one child crying hysterically and one mum shouting.  It wasn’t an ideal situation.  The mum kept threatening that they would leave without getting her ears done.  Three times she actually grabbed the girl and brushed past Caitlyn to leave the store.  I began to hold Caitlyn cuddled into me so the mum could storm off with no obstacles!  This was such an awkward experience.  I quietly suggested to Caitlyn that we could leave and come back when things were calmer but she didn’t want the time we’d wasted to be in vain so we stayed put.

Meanwhile Danny was looking after the other girls.  I’d given them a picnic to keep them entertained thinking we wouldn’t be that long.  They had finished this and were now bored of the riverside view so came in to see what was taking so long.  Seeing we still had a long time to wait Danny then took the girls to the park for me (having older kids can be a challenge but they do have their helpful moments!).  Eventually the mum realised that her daughter would not be having her ears pierced that day and stormed out with her poor child.  We could hear the shouts and screams even as they walked down the road.  I admit I had tears in my eyes at this point and if it wasn’t for Caitlyn’s eagerness to go through with the ear piercing and my British stubbornness to not lose my place in a queue I would certainly have left.

Thankfully the next child was very excited and confident about having her ears pierced and her mum was very calm.  This time the piercing went really well and we all applauded when she walked out proudly with her new shining earrings.  This was the positive turn in events that we needed. Perhaps it was going to be an omen.   It was all going to be okay from here.

We were getting close now.  There was just one more girl ahead of Caitlyn.  She was also very excited and her mum was very encouraging.  She sat nicely for the dots on her ears but became afraid when the instrument was out.  Her mum patiently tried putting her on her lap, holding sweets and other techniques but her daughter was upset.  To the mum’s credit she said we’ll give it a miss today as I don’t want her to be upset and off they went minus earring but happy to enjoy the rest of their day.

It was our turn.

I was now nervous that Caitlyn would suddenly turn from Dr Jekyll into Mr Hyde the second the piercing instrument came near her.  The Claire’s assistant asked Caitlyn to choose her earrings.  We pointed out the Aqua Crystal Daisy pair (£25).  She told us that they are stainless steel and therefore not recommended for first time ear piercings.  If that’s the case I’m not sure why they have them advertised as a starter kit or why most of the earrings available have stainless steel backs.  So we had to look at the more expensive gold studs.  Instead Caitlyn chose the 9ct Yellow Gold Crystal Daisy (£46).  So with the bottle of £10 Rapid Care Solution  the “free” ear piercing was now adding up to £56 (an expensive early birthday present).

From here thankfully everything went to plan. I signed the authorisation form and they started to prepare for the piercing.  Dots were marked on her ears.  We laughed as she already has a freckle just off centre on her ear lobe so hoped this wouldn’t confuse the assistants.

One of the reasons I chose to get the girls’ ears pierced at Claire’s (formerly Claire’s Accessories) is because as long as two members of staff are available they will pierce both ears at the same time, therefore avoiding a situation where a child gets one ear pierced but is too scared for the second.  It’s a lot easier and their special piercing instrument doesn’t even touch the ear making it hygienic.  I’ve since read that it’s best to use an actual needle rather than have the ear pierced with the earring but my own ears were pierced with a “gun” years ago too.   Personally we haven’t had any problems.  Caitlyn sat very still and didn’t even flinch for the piercing.  She said it didn’t hurt at all.  I always tell the kids to breathe through pain and I think this helps.  They cleaned them and explained the aftercare.  Then I paid (possibly the most painful part of the procedure) and was reminded about the aftercare again.  I would say once we eventually got past the queue the the care and service was great.  Caitlyn would like to point out that she didn’t get a lollipop though as other kids did (it’s all about the free lollipop).

The mum behind us thanked us so much for both being so calm as it helped her daughter to see how easy the process was going to be.

So we survived the experience that was the Claire’s Ear Piercing queue.  If I came here in the future I would definitely book an appointment and come in at a quieter time. 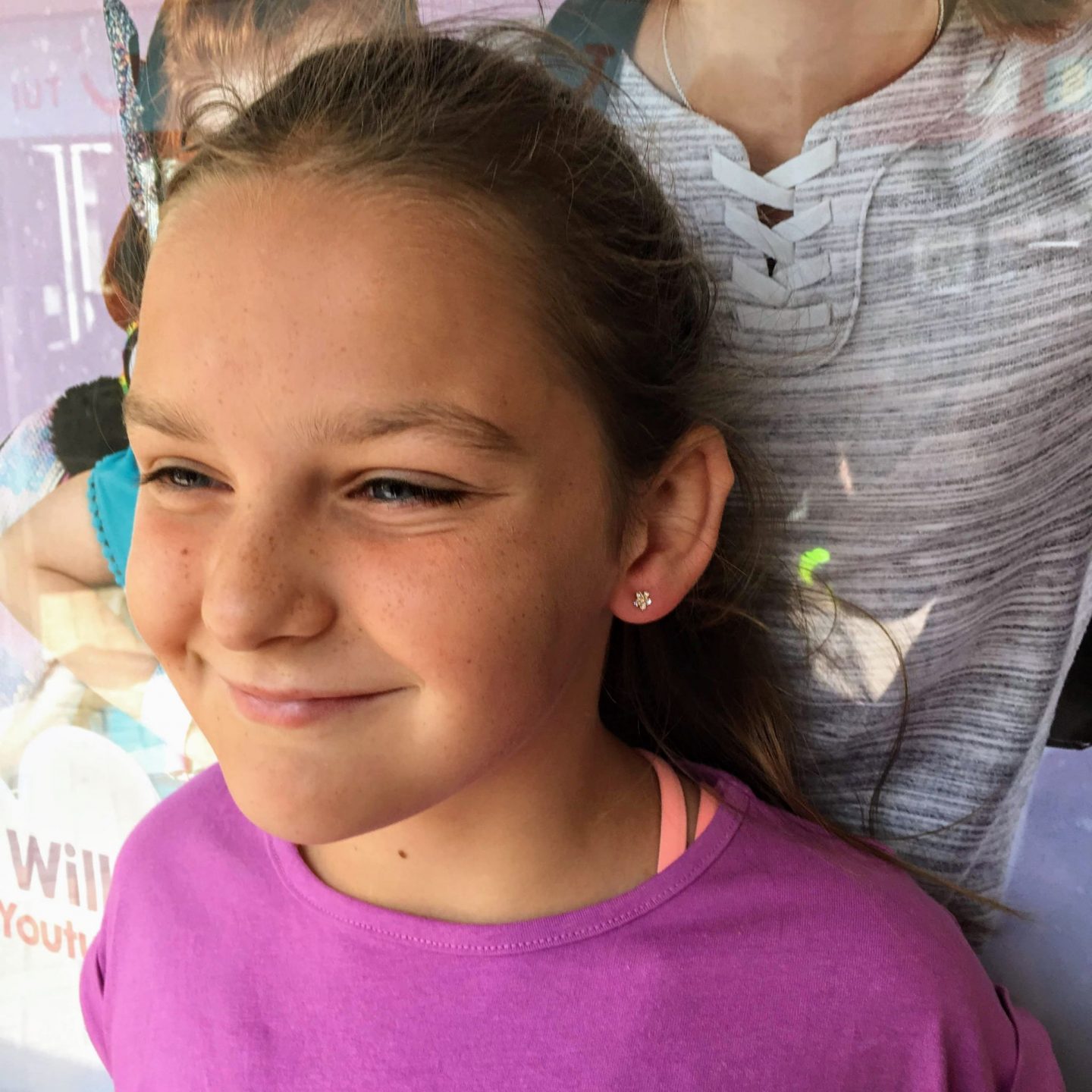 So, we had one happy girl with newly pierced ears- they do look very pretty!  We walked to the park and had a play with the rest of the kids before driving home.  We had planned to do more shopping and to walk around the art displayed in the “Break Out of the Gallery” display but it was later than planned so we were happy to go home and have some quiet time.

I know getting kids’ ears pierced can be a controversial subject.  I’d never encourage my kids to have them done (Danny isn’t allowed at all due to his heart condition and medication) but I’m happy to let the girls decide when they are old enough as I was even younger when mine were pierced (I rarely wear earrings nowadays though!).  I know in some cultures it takes place when kids are even younger again.

Would you let your kids have their ears pierced?  Have you considered ear piercing at Claires or would you prefer the needle method?  I’d love to know your thoughts.