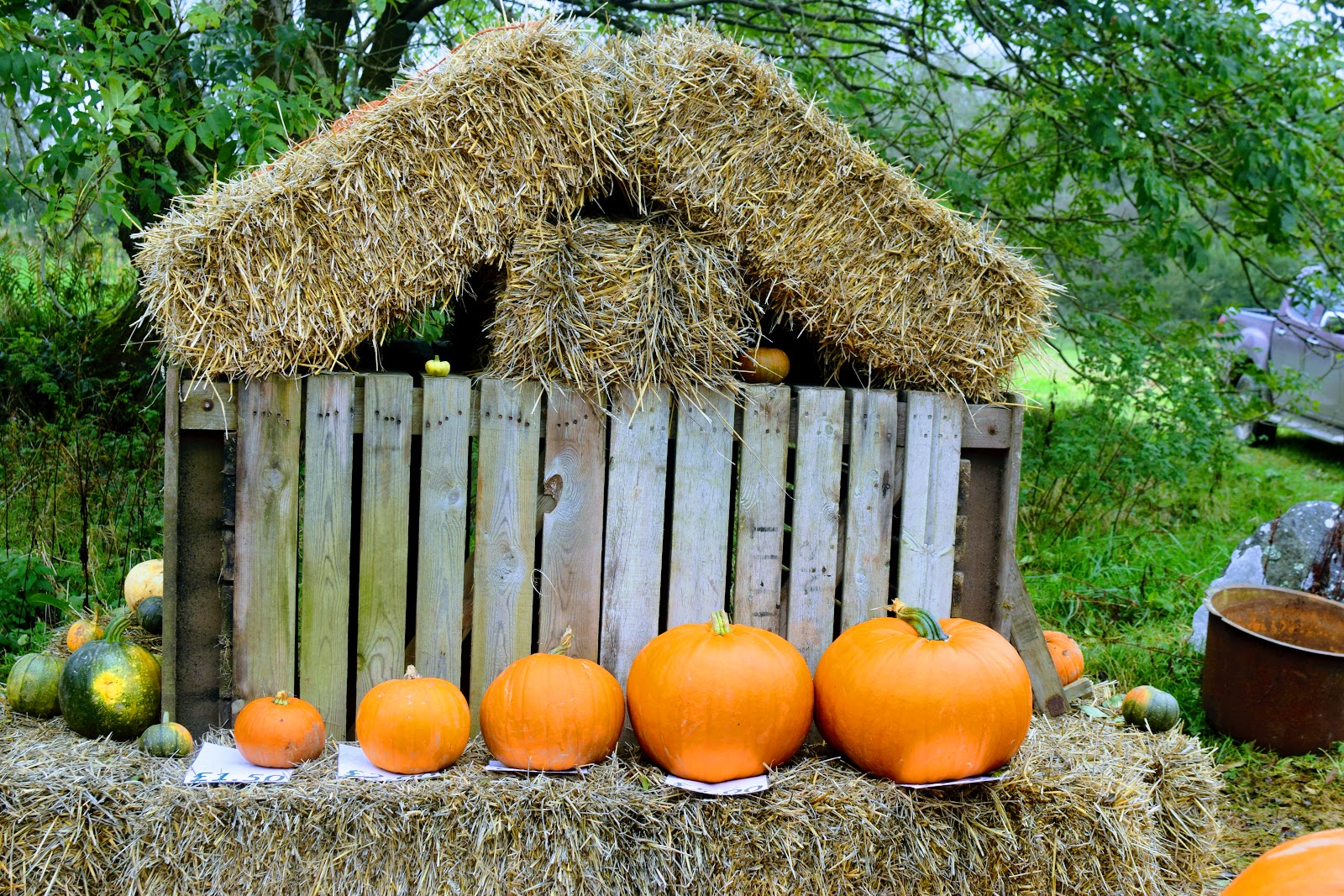 This weekend, it was time for our annual “pumpkin picking” at Brooksgrove Farm, Haverfordwest in Pembrokeshire.  I know we could pick them up from the supermarkets closer to Halloween but I think it’s great to show the kids where the pumpkins grow (every year I mean to grow pumpkins with the kids at home but we always forget until October- Brooksgrove Farm sell Pumpkin Plants earlier in the year so if our seeds don’t flourish we could buy plants) and to support local family farmers.  Read on to find out all about our time picking our pumpkins. 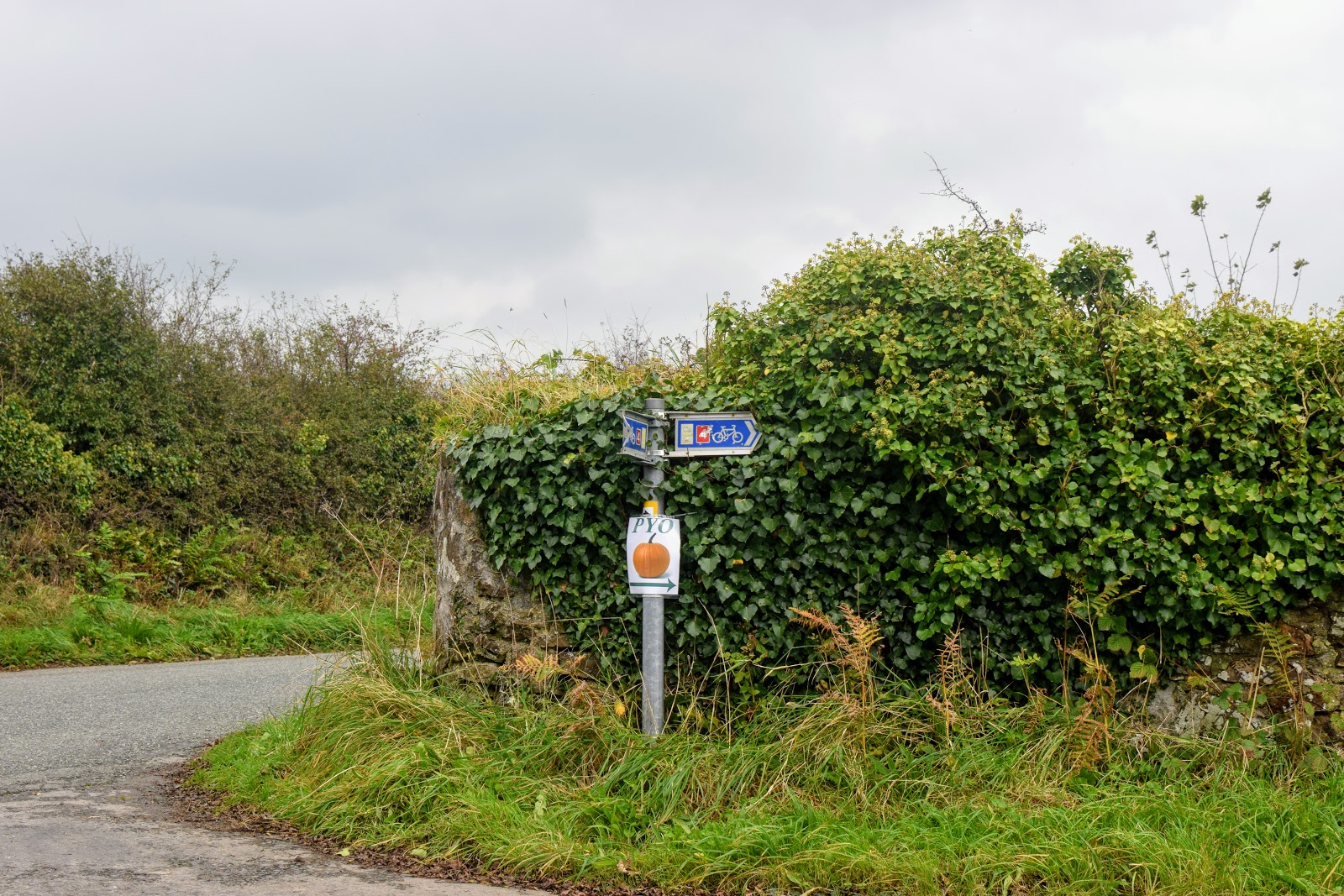 Brooksgrove Farm lies on Brooksgrove Lane, Bethany Road, (Sat Nav postcode:  SA61 1XR).  It’s located off Scarrowscant Lane in Haverfordwest.  Once on Scarrowscant Lane the pumpkin patch is  well signposted.  As it’s a working farm there is a typical Pembrokeshire long single track road to drive down.  There are passing spaces but unfortunately these are sometimes too boggy during the wet weather (which we have plenty of at this time of year) so I admit the drive is never my favourite part of the day.  We were lucky driving into the farm but not so lucky driving out as it got busier.  There is free parking (and free entry) but the car park does fill up quickly. 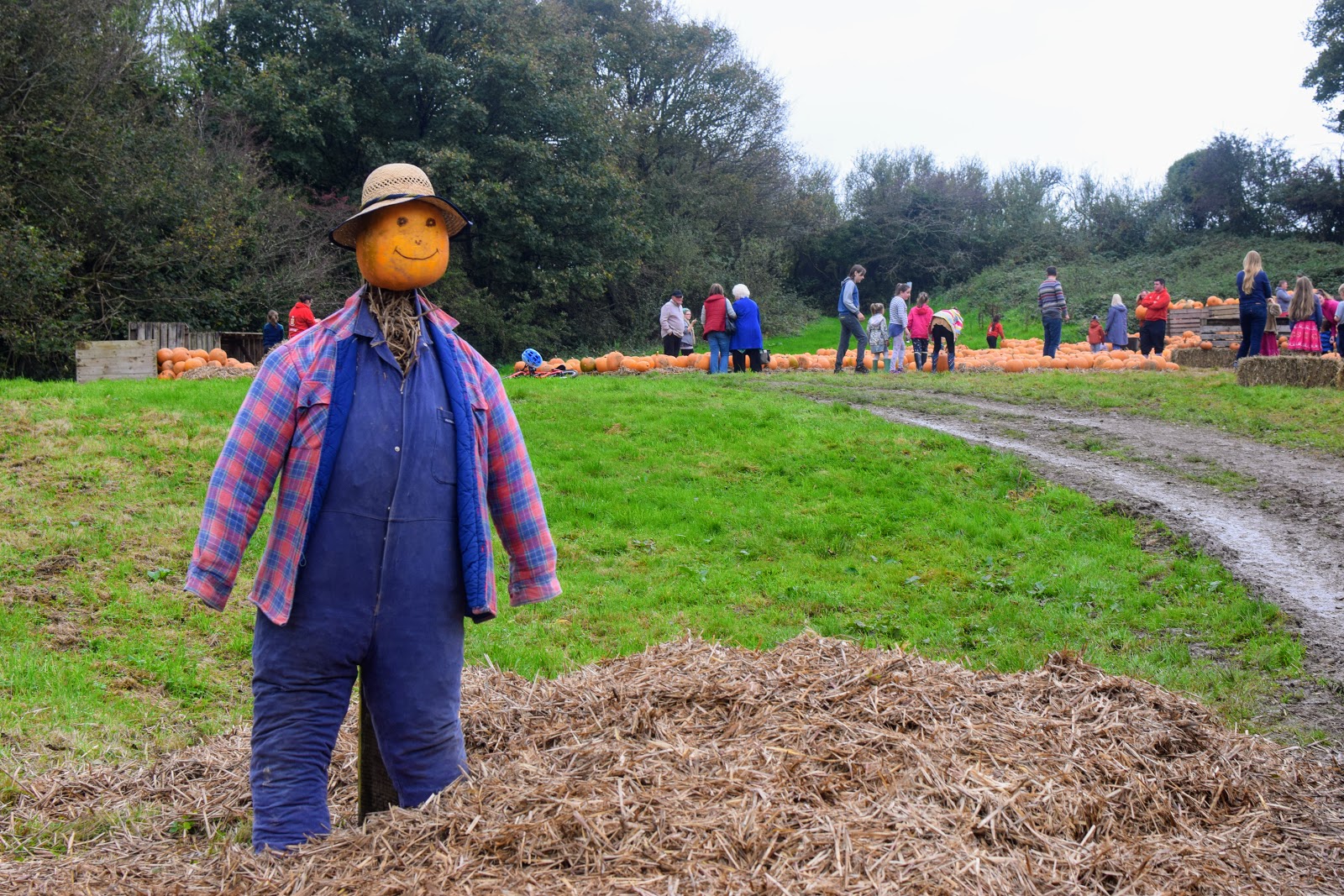 We parked up and walked to the pumpkin field.  I love the welcoming pumpkin scarecrow! 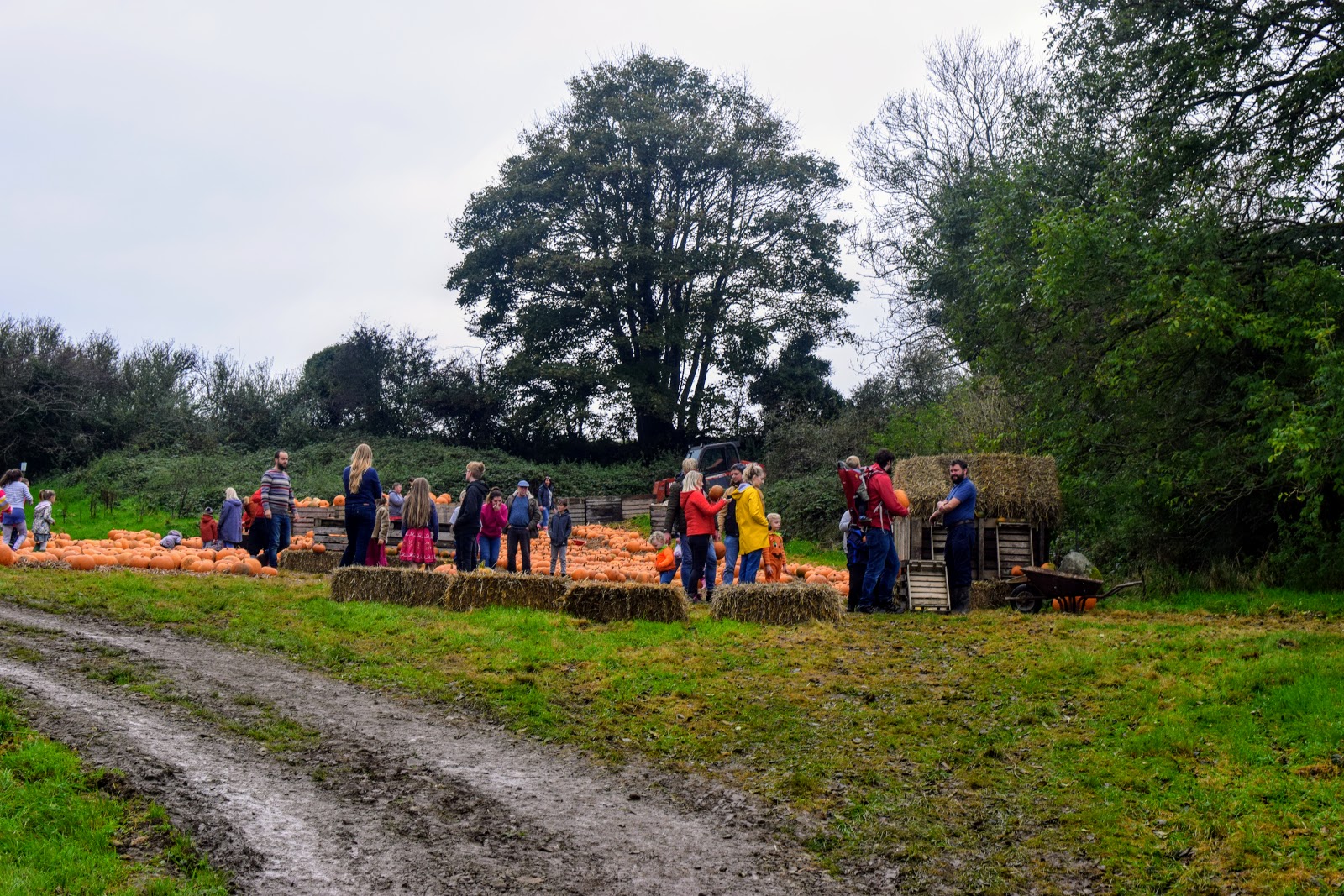 The kids couldn’t wait to start looking for the “perfect pumpkin”.  We reminded them to pick one that they could manage to carry- although Danny and Caitlyn took this as a challenge! 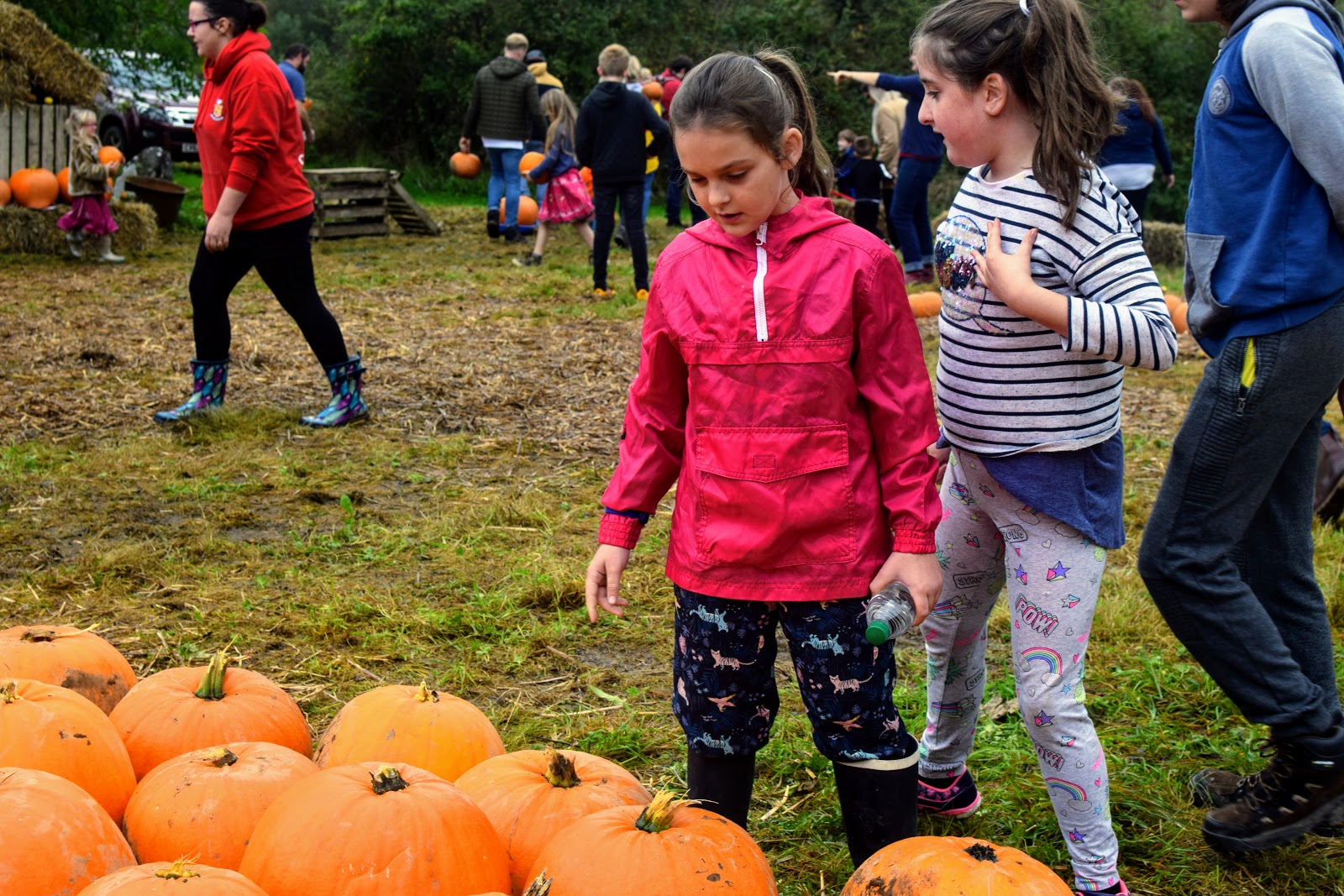 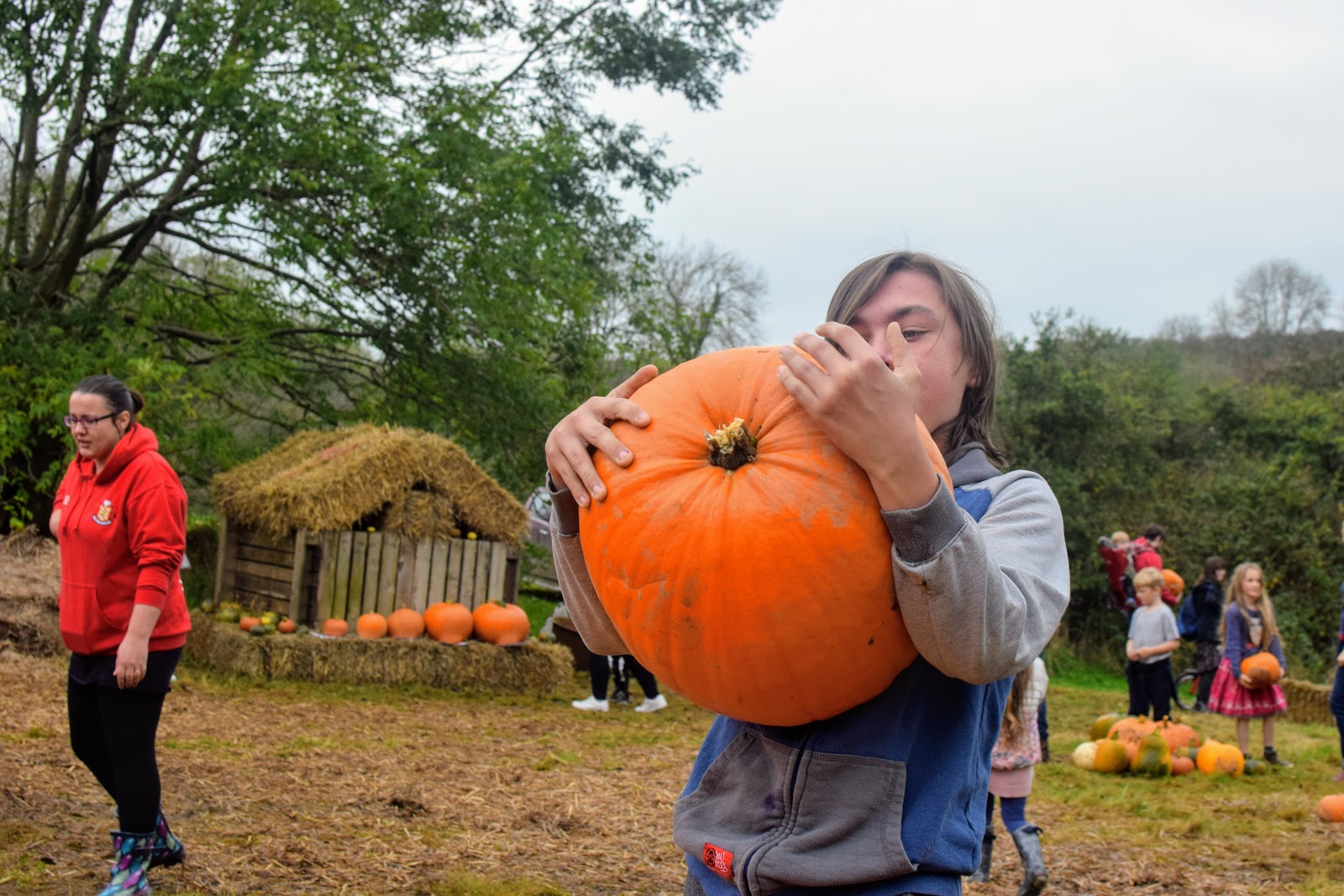 Danny loved this bumper sized pumpkin and as he could (just about!) carry it I had to agree!  I prefer the smaller ones myself. 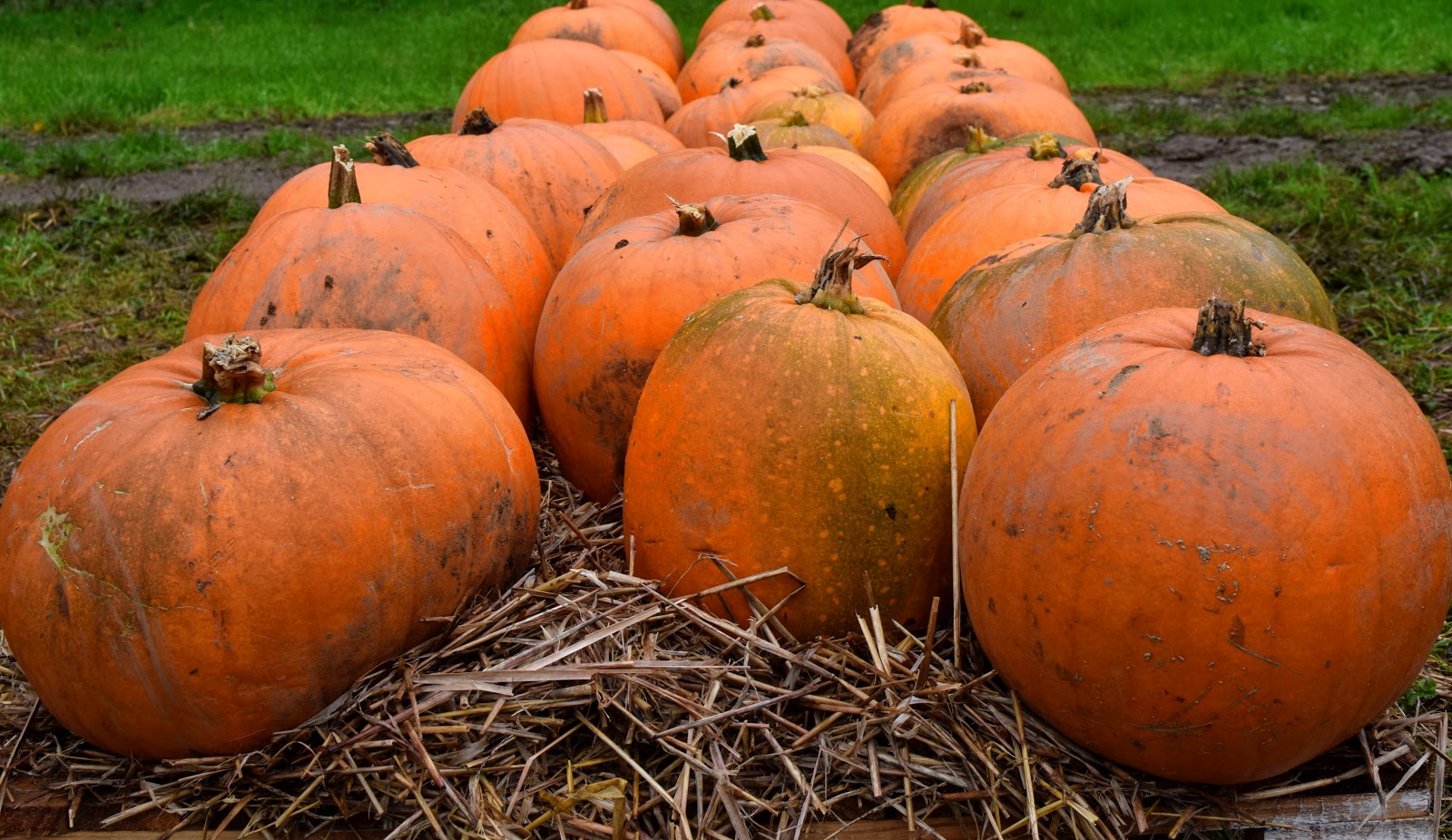 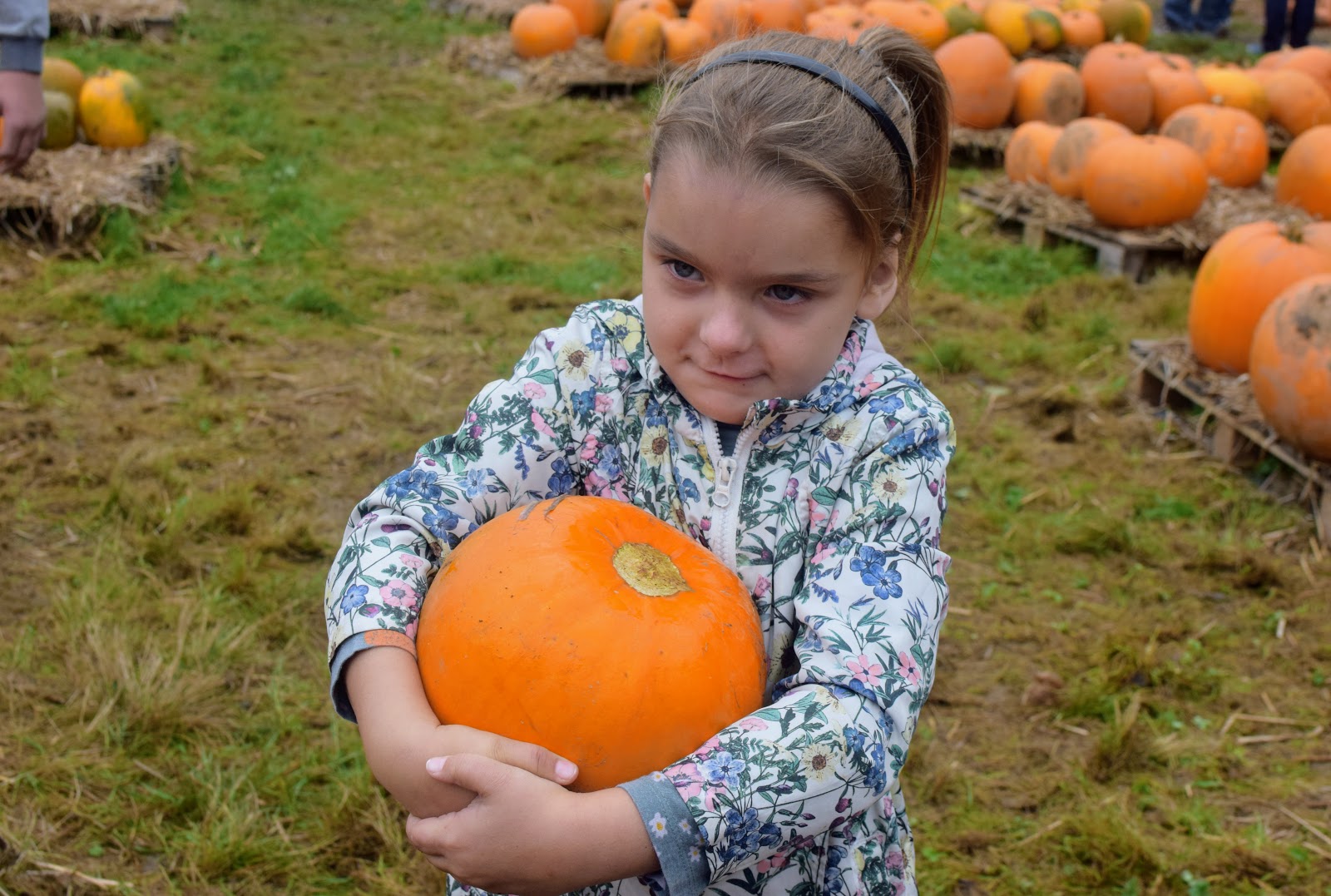 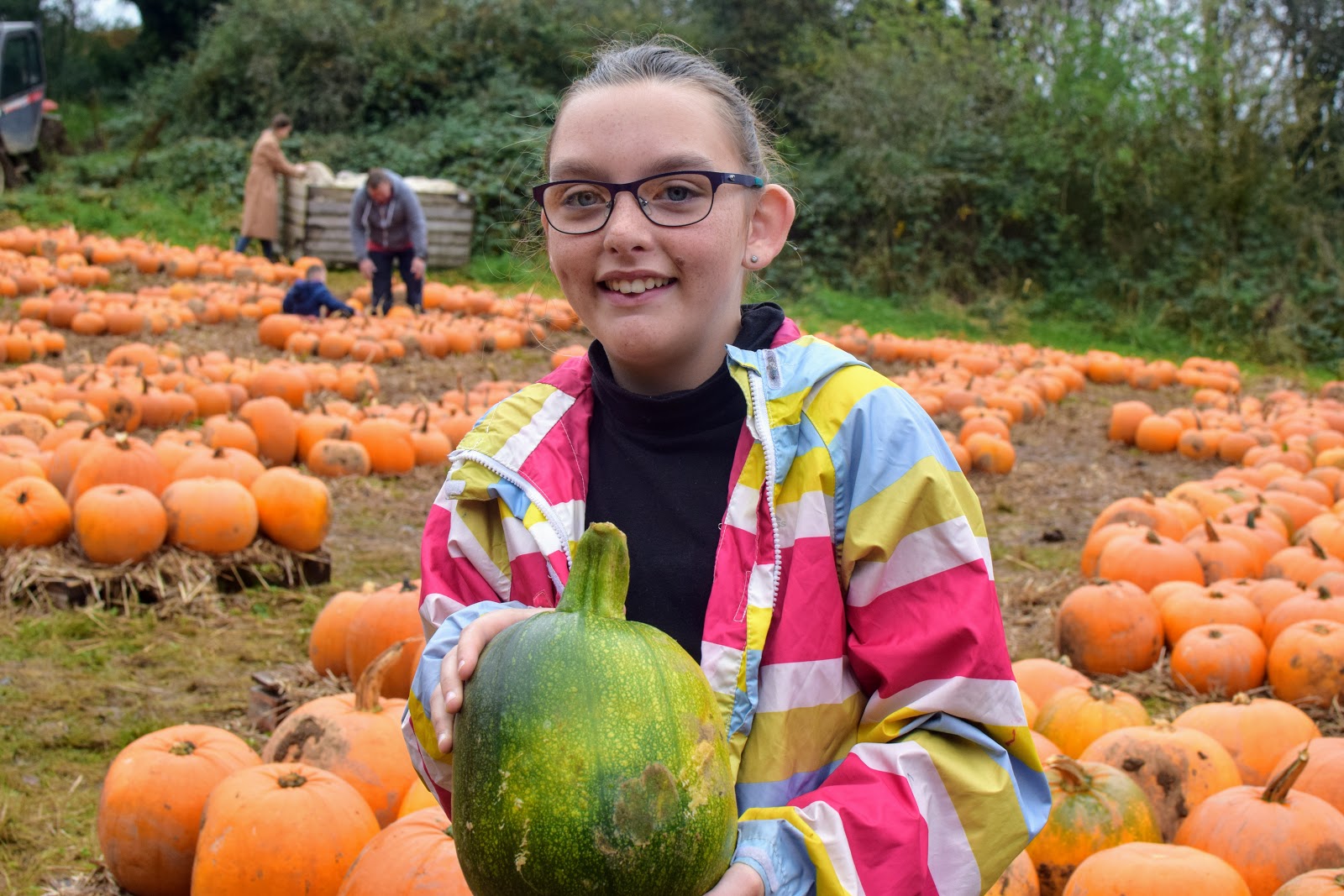 Rebecca likes looking for the more unusual pumpkins.  She thought this ripe pumpkin looked like a watermelon. 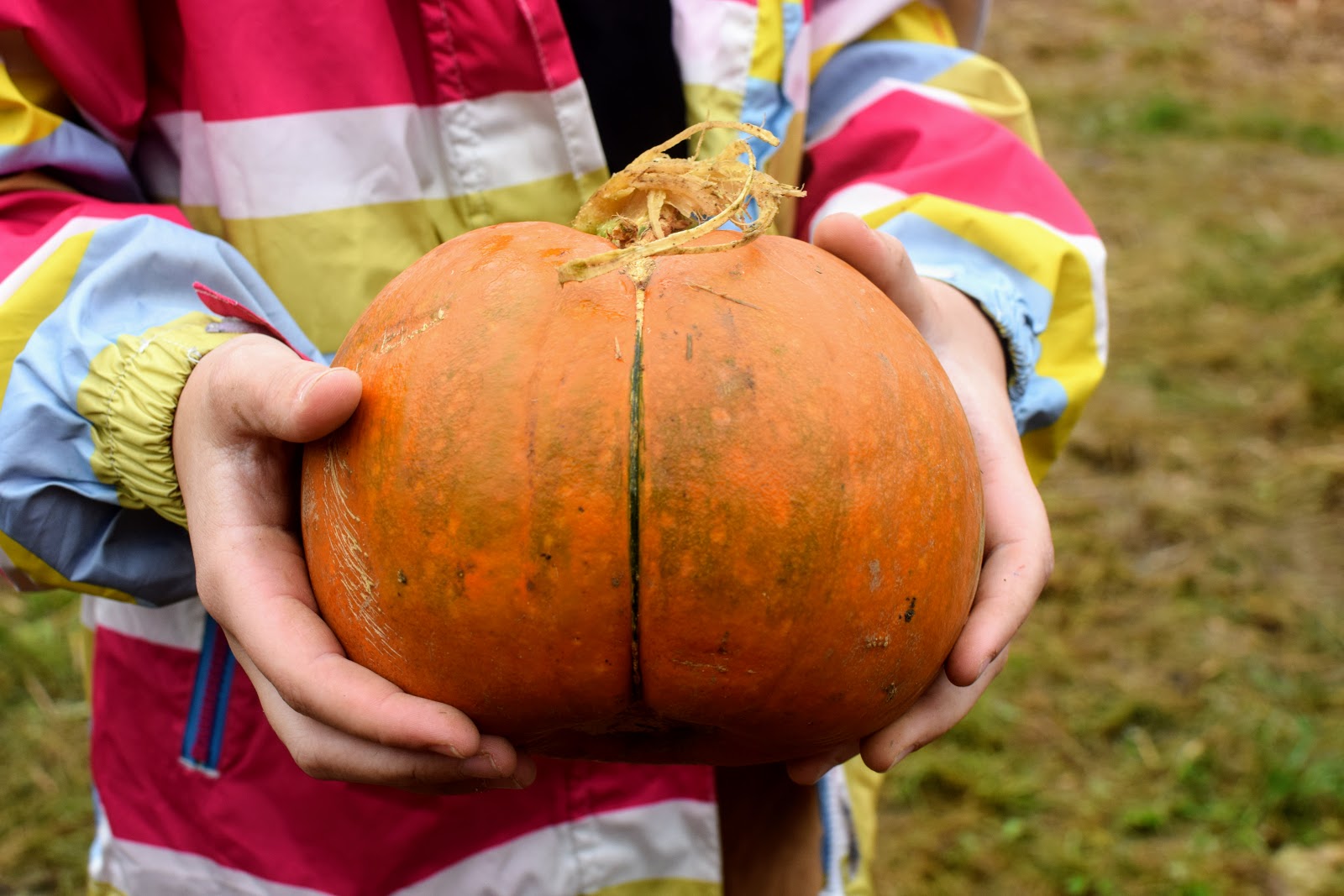 I’ll leave it to your imagination what this pumpkin reminded her of! 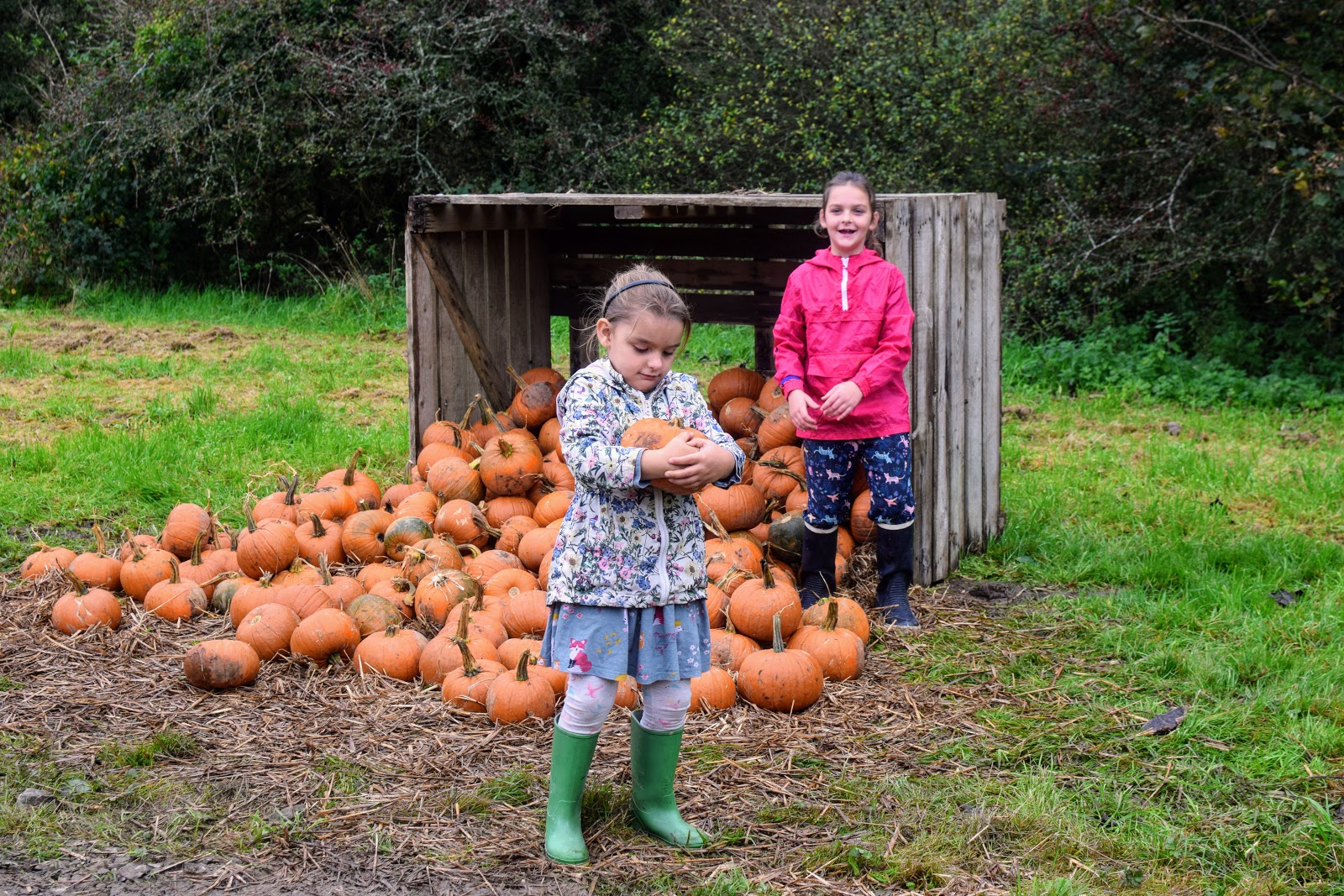 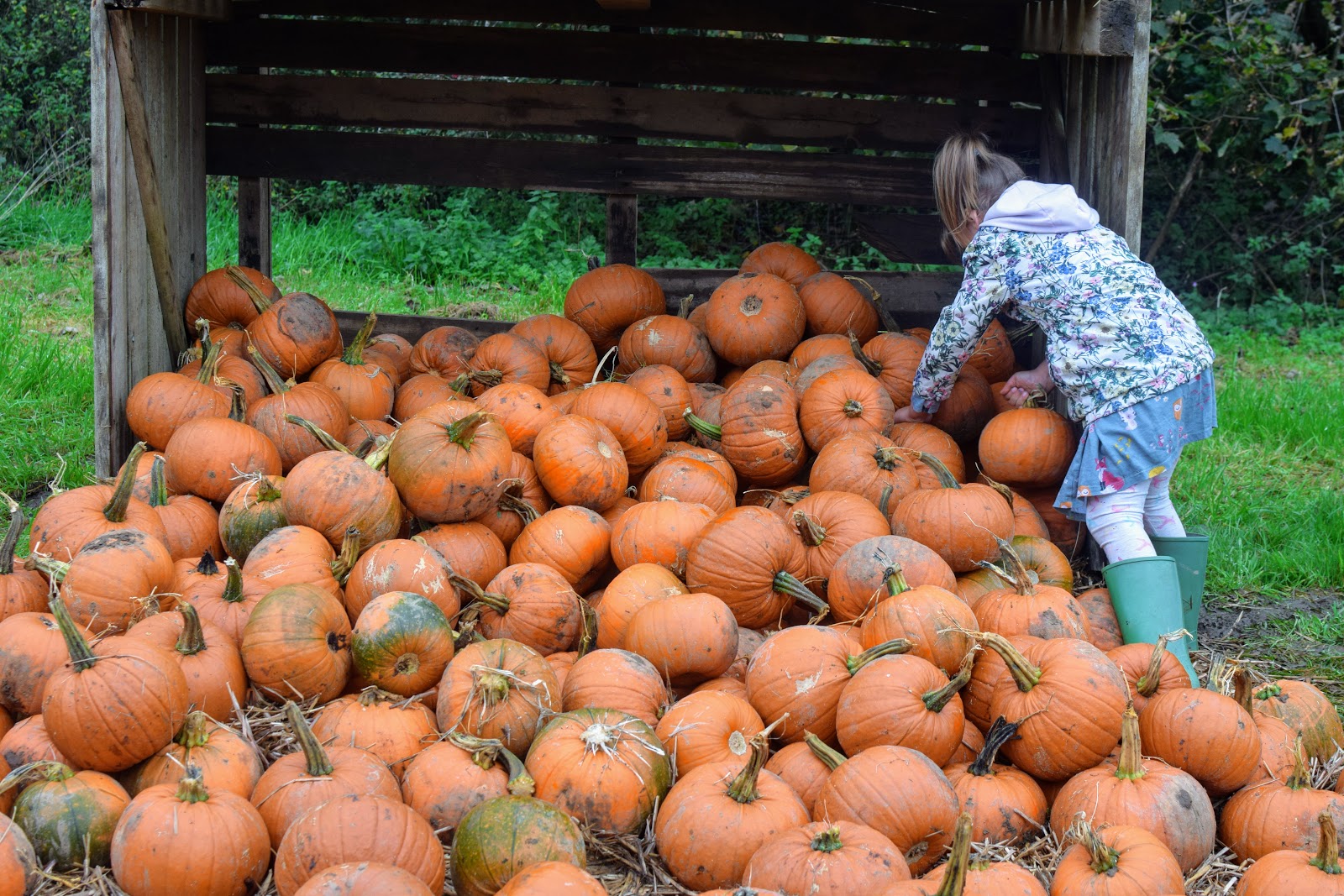 Every year we see changes and improvements at the pumpkin farm.  This year they had sledges available to carry the pumpkins- such a great idea!  At first we thought families had brought their own (and wished we’d been clever enough to pack ours!).  Once we realised they were for customer’s use we waited patiently until one became free. 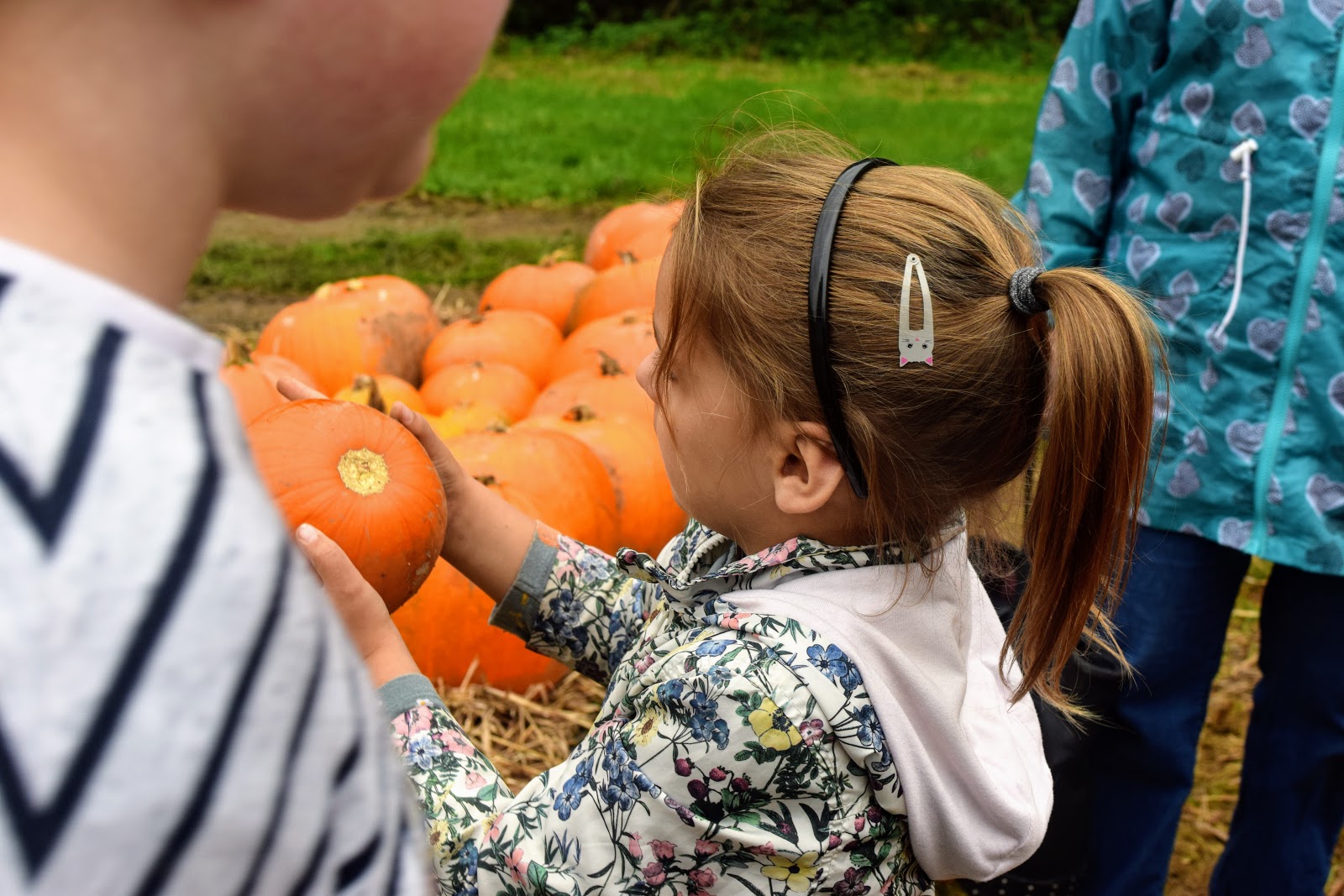 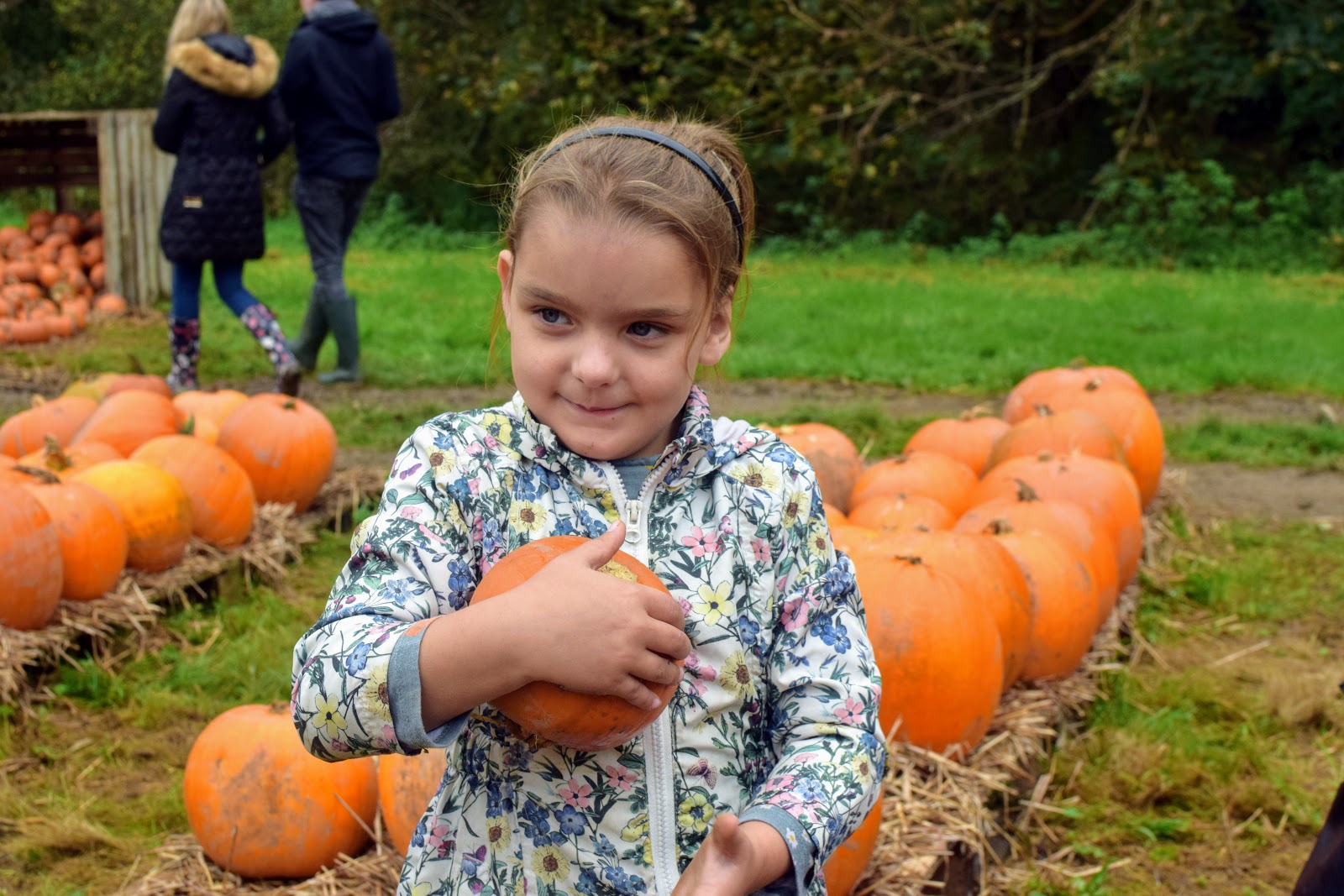 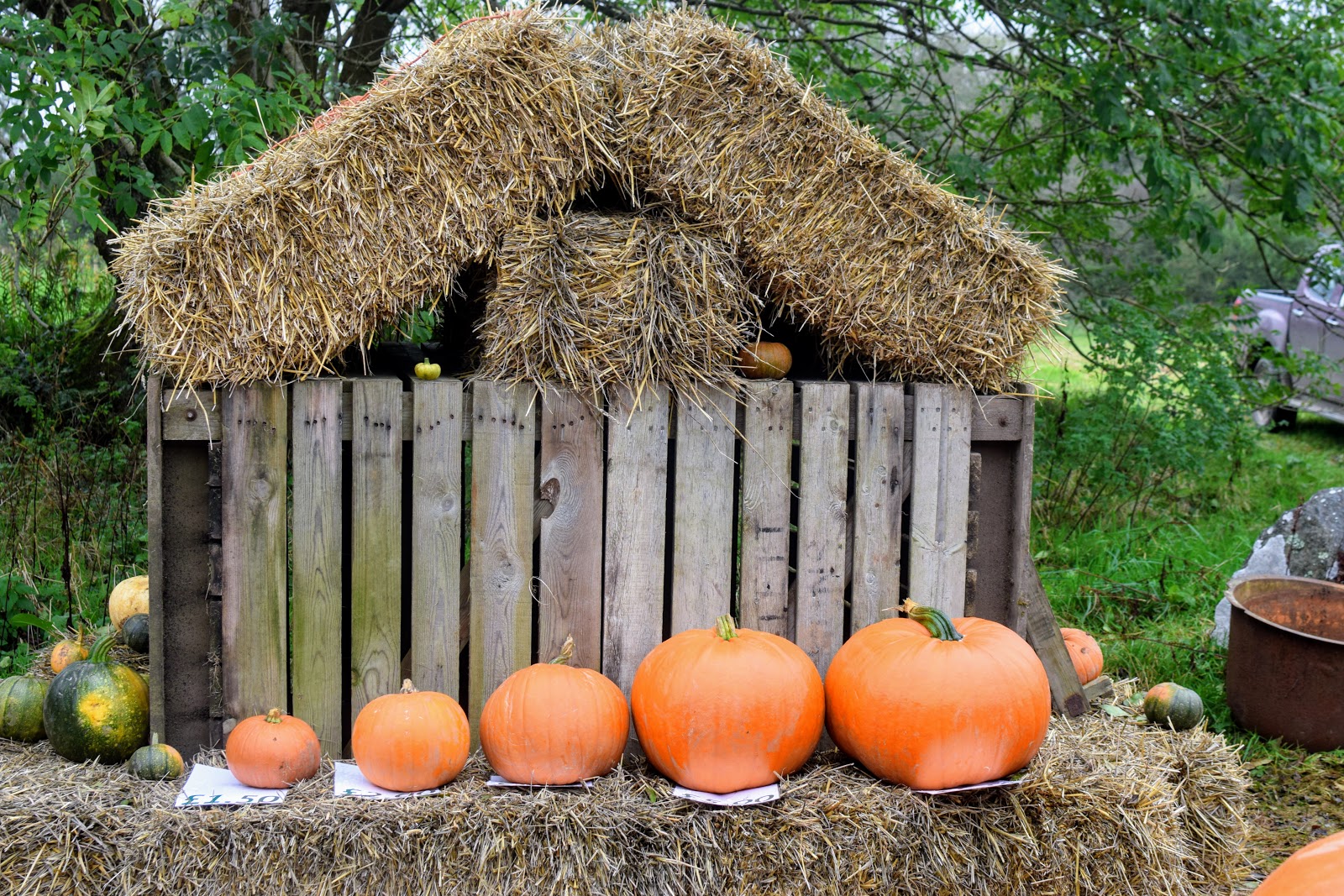 The pumpkins cost from £1.50 for the smallest to £6 for the largest so are great value.  They’re great quality too and there were so many to choose from.  We bought five of varying sizes and spent just £14. 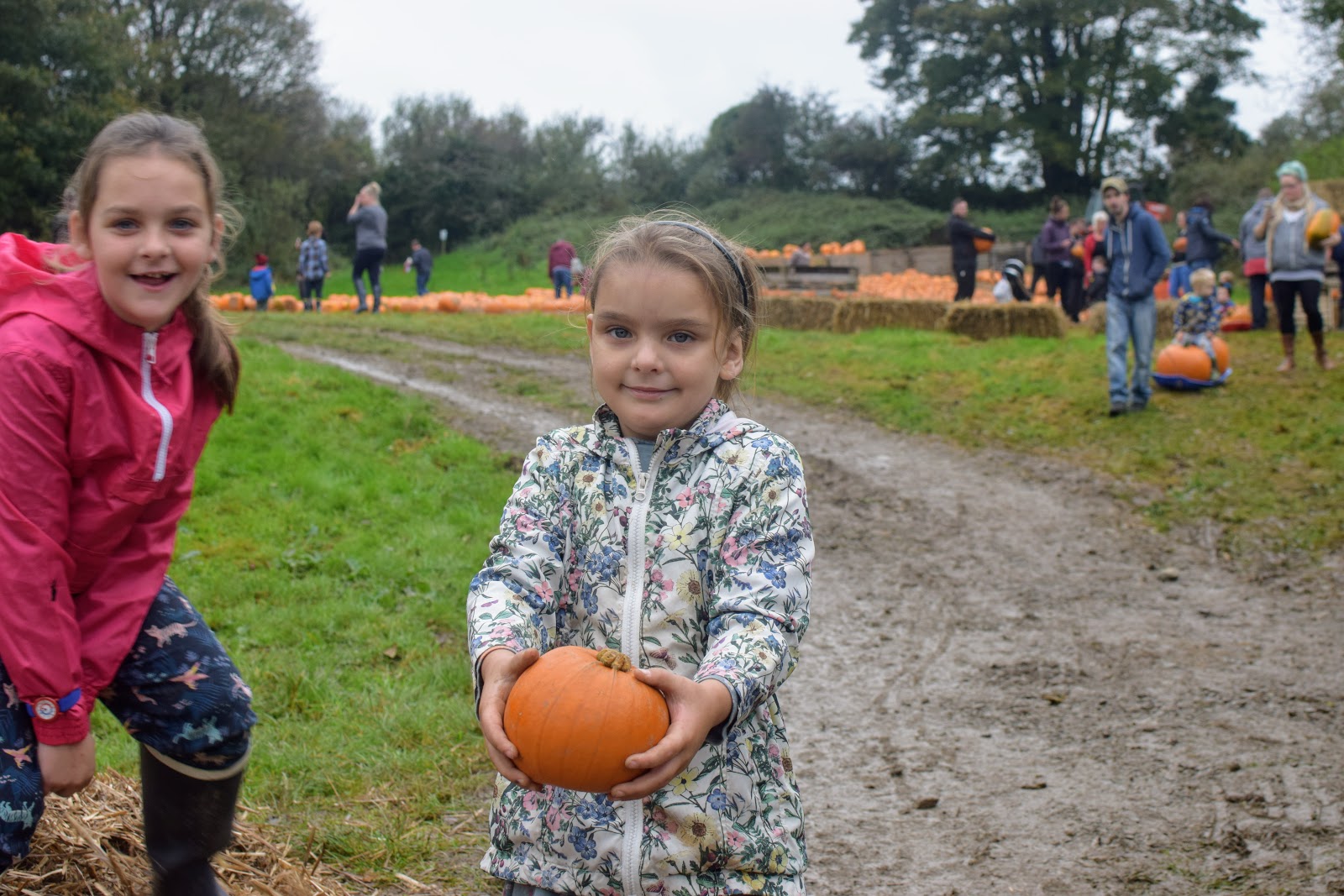 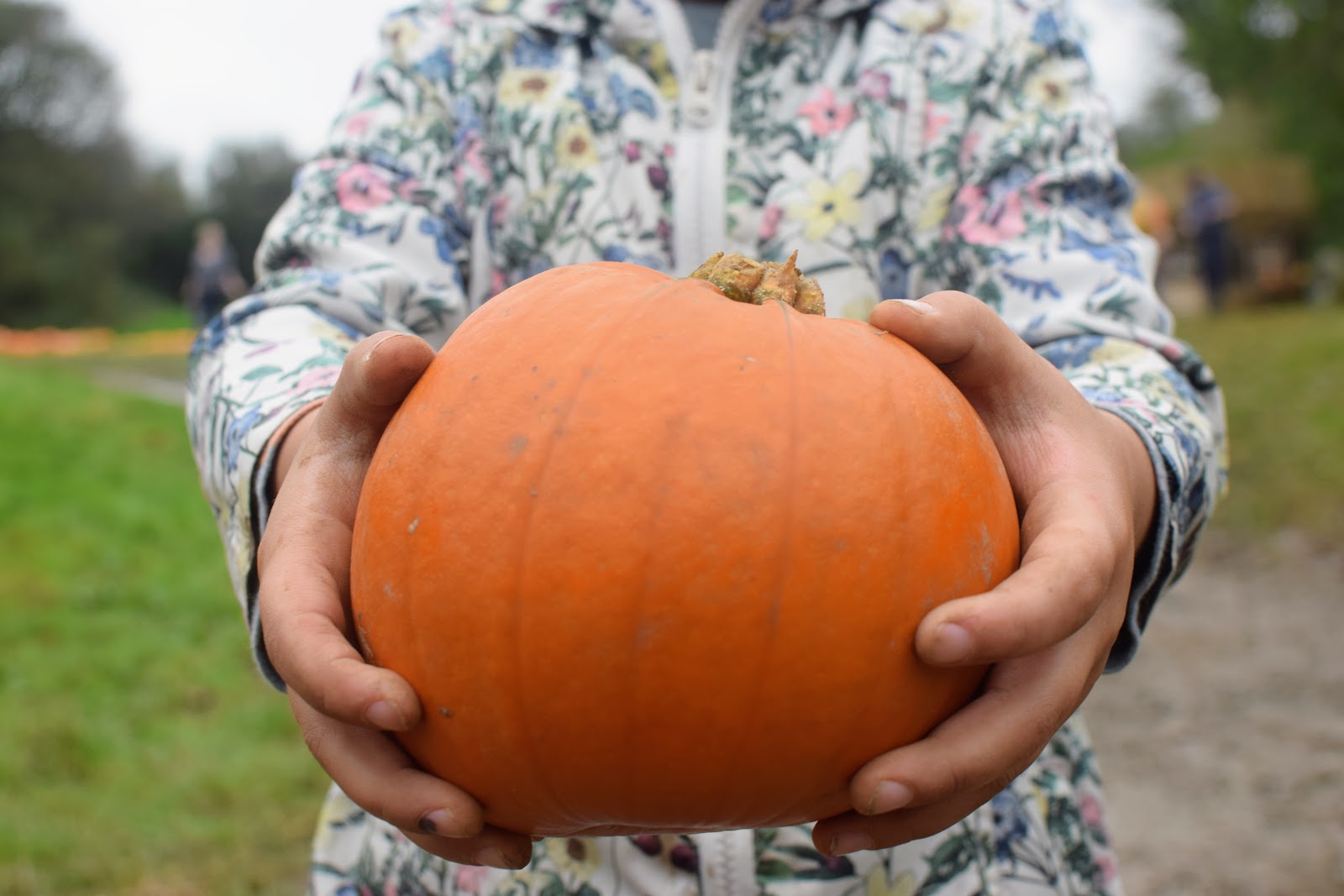 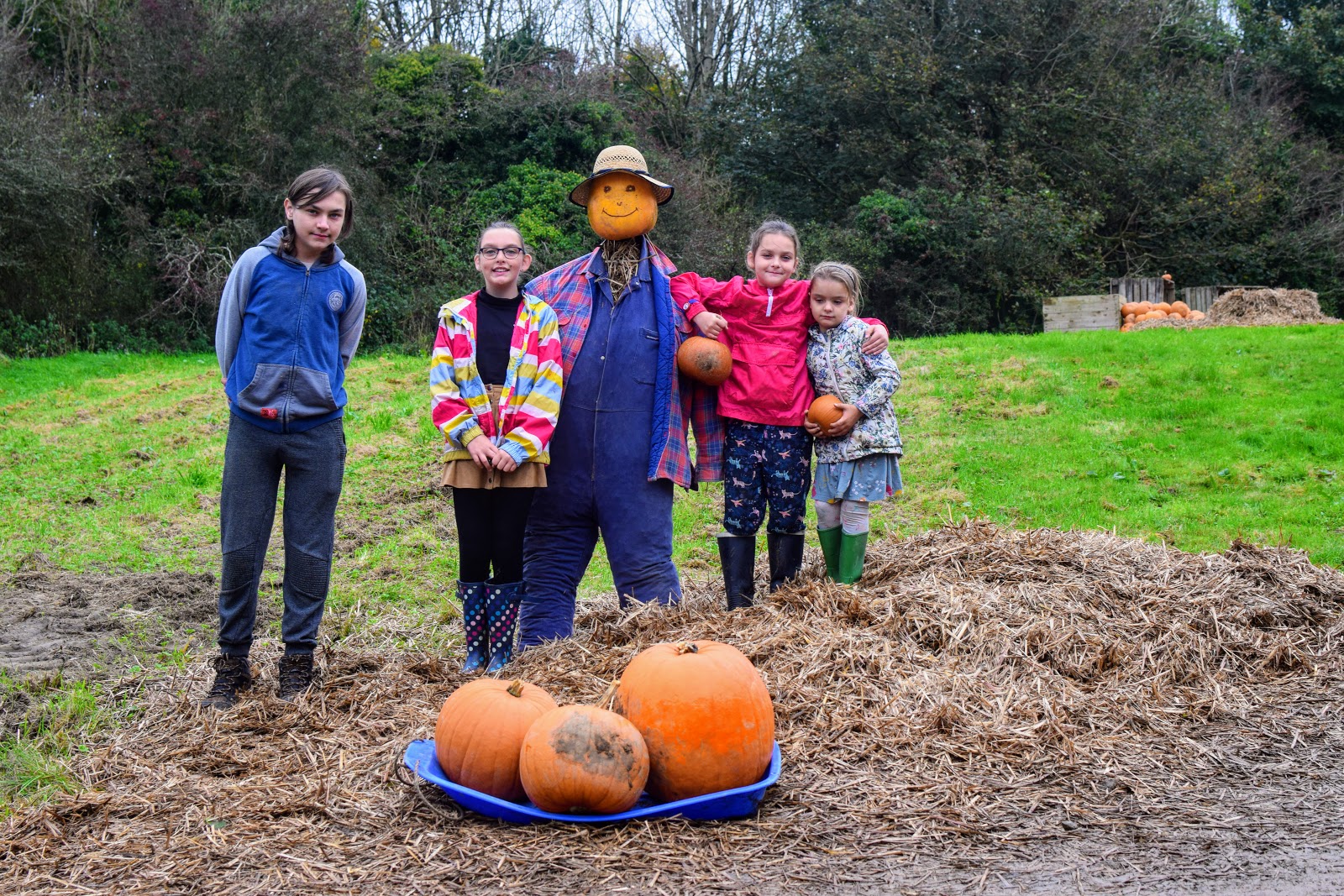 The Evans-Crittens with their pumpkins!  Danny is of course “too old” to stand near the scarecrow so the pumpkin man looks more like family in the photo!  Maybe poor Danny was scared…

We loaded them into the car and then it was time to leave.  The car park was busy so it was  quite difficult to leave but I waited patiently and Dave helped to watch me and a couple of other cars out.  Then the single track road became busy too.  As I set off the road was clear, I then saw an oncoming car and planned to pull into the passing bay.  As expected, it was too muddy for me to drive into without getting stuck so I had to do my least favourite thing and reverse really far back (and over a bridge-eek!).  Once all the oncoming traffic had passed me, Dave ran the whole way ahead to check the road was clear and stopped the traffic for the backlog of cars to get out.  Poor Dave! The kids loved seeing him racing ahead of our car and Izzy said he’s “like a Super Hero”, he certainly is to us.

We managed to get out but I do hope one year they’ll control the traffic or maintain the passing bays so I can avoid reversing again.  I’d even be willing to pay for a tractor ride to the pumpkins!

Overall it was lots of fun, we feel very lucky to have this experience in Pembrokeshire and we will definitely be back next year!


If you’re planning to go pumpkin picking remember to pack your wellies, a raincoat and a bin bag or blanket to lay your muddy pumpkins on.

Take a look at our video:

Have you been pumpkin picking this year?  Now we have to decide what to make with our pumpkins…

Brooksgrove Farm will be open every day from 10am – 6pm until October 31st (or until they run out of pumpkins! Follow their Facebook Page for updates: