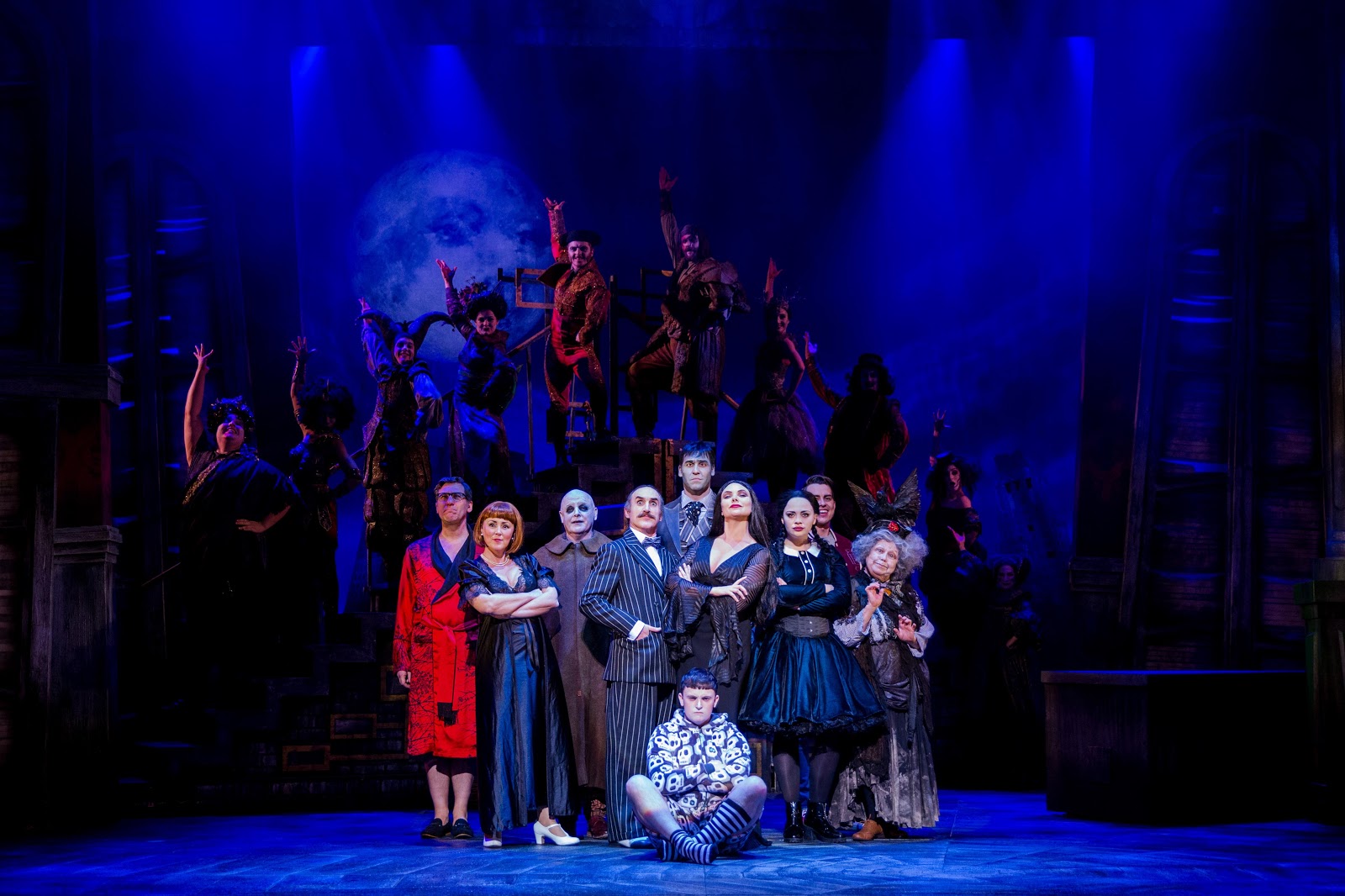 They’re creepy and they’re kooky, mysterious and spooky, yet as soon as the orchestra broke into the reassuringly familiar notes of the Vic Muzzy “Addams Family” theme tune, I felt all warm and fuzzy and memories of watching the old 1960’s Addams Family episodes at my grandparents house as a child came flooding back.  My daughter was excited as she is a fan of the 90’s movies passed on from my teenage years.  Initially she expected the musical to be based on “her” version of the Addams Family and asked me what happened to baby Pubert.   The Addams Family have been around since 1938 when Charles Addams first included them in his New Yorker comic strip.  Once the musical was in full swing it had an original story, musical score and a life of it’s own.

The Addams Family – The Musical Comedy 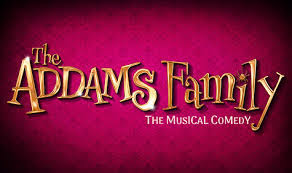 The Addams Family Musical  first opened on Broadway in 2010 and now everyone’s favourite kooky family are currently on stage in the UK Premiere of of this spectacular musical comedy, from the writers of multi award-winning hit musical Jersey Boys, with music and lyrics by Tony Award nominated Andrew Lippa.  It stars Samantha Womack as Morticia, Carrie Hope Fletcher as Wednesday, Cameron Blakely as Gomez, and Les Dennis as Uncle Fester.  We went along to review the show at the Wales Millennium Centre. 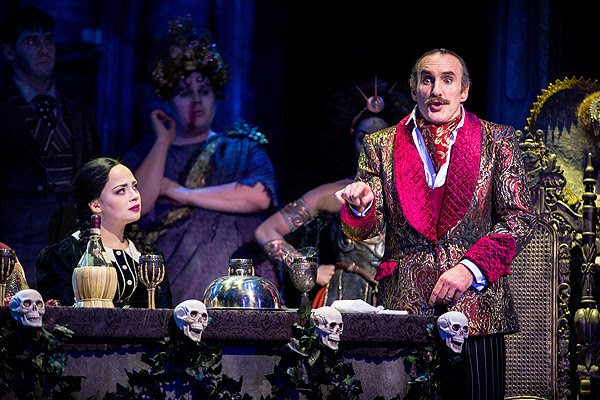 Wednesday Addams, the ultimate princess of darkness, is all grown up (she’s nearly Thursday!) and has a shocking secret that only Gomez knows. She’s fallen in love with a sweet young man from a respectable family. With his cherished Morticia in the dark will Gomez manage to keep his daughter’s secret until the two families meet for a fateful dinner with hilarious consequences? We join them along with Uncle Fester, Lurch, Pugsley and more for a heart-warming story of love, family and friendship… with a twist!


The show features a live orchestra and extraordinary original score, composed by by Andrew Lippa,  The Addams Family is sure to entertain whether you are 7 or 307! 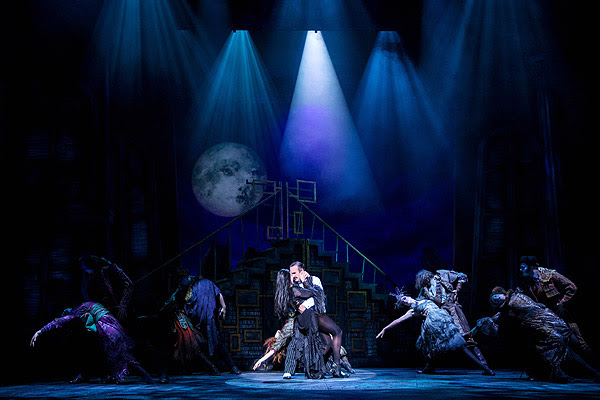 We meet the Addams Family very aptly in the family graveyard.  As Gomez calls upon his old ancestors it draws us into the musical and makes us feel like honorary Addams family members for the rest of the show (and beyond even).

“Ah, the intoxicating spell of the graveyard. Once a year when the last leaf of autumn falls, we gather to honour the great cycle life and death. Come,every member of our clan – living, dead- and undecided and let us celebrate what it is to be an Addams.”

The ancestors and their gloriously spooky individual costumes really compliment the show with their dance routines, and interactions with other characters (keep an eye on the family portrait too!). 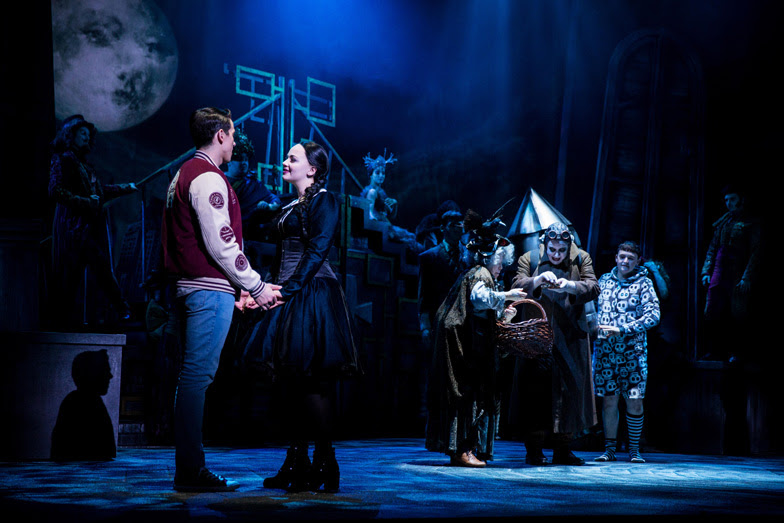 As the Beinekes arrive at the Addams family mansion  it made me think of the “normal” Brad and Janet arriving at  The Frankenstein Place. 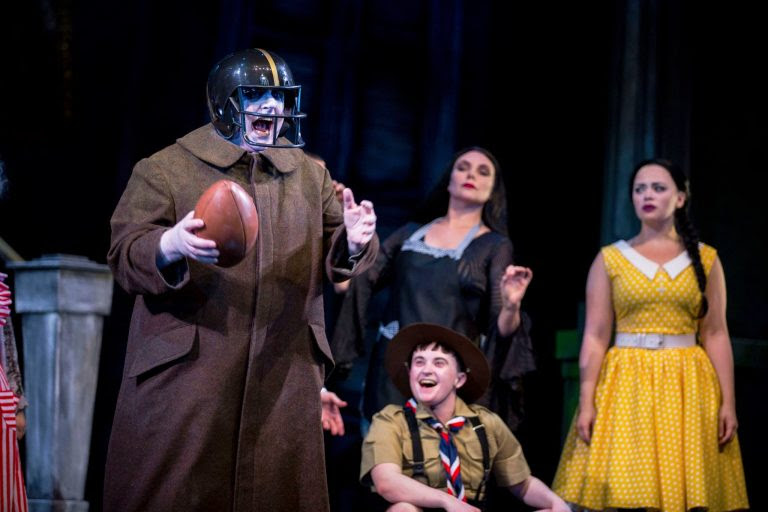 Despite living on the dark side (of Central Park) for the Addams Family, as the name suggests their main priority has always been their family.  The musical is also a coming of age drama for Wednesday as she struggles with falling in love with Lucas.  Their is an element of Romeo and Juliet as our star crossed lovers fear that they will not be allowed to marry if their polar opposite families do not get along.  Throughout the show Gomez battles between his loyalties to his wife and his daughter (who he can see is very alike Morticia in her  own youth).  It was very touching when Gomez sang “Two Things” and “Wednesday’s Growing Up” but balanced with humour as he ends with the retort “She’ll be Thursday before you know it!”  Morticia’s changing relationship with her growing daughter was easy to relate to as was her exclamation as she realised she also was turning into her own mother.  Sibling dynamics are tested as Pugsley worries that Wednesday won’t torture him anymore now she only has eyes for Lucas.  Talking of torture, I laughed whole heartedly as Pugsley’s pained but well timed screams became a part of the song, “Pulled”.

We soon find that the Beineke’s have their own secrets.  However, thanks to Pugsley’s plot to destroy Wednesday’s relationship with Lucas, a twist means that things turn out rather differently, although you’ll have to watch the show to find out how!  It’s fair to say that I hope they will all continue to live “unhappily ever after”. 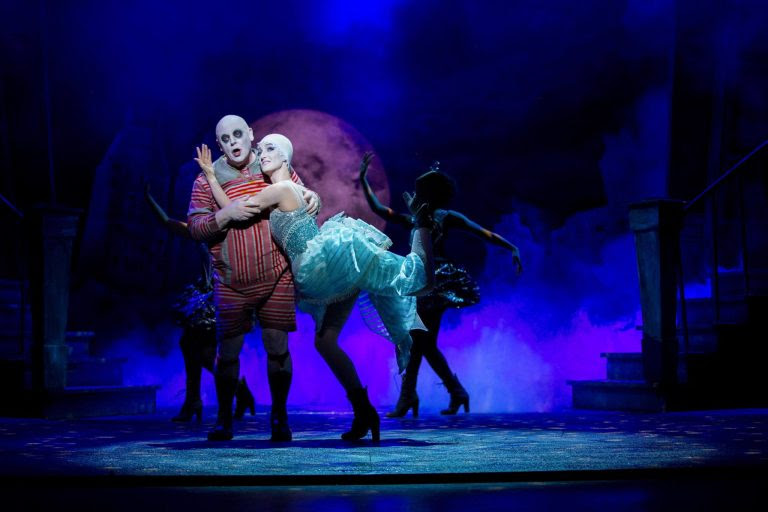 Apart from hearing Carrie Hope Fletcher (of whom more later) singing “Pulled” (years before she even auditioned for the role of Wednesday Addams)  and “When You’re An Addams” on “Live at the Palladium”, I hadn’t heard any of the Andrew Lippa score.  It’s both refreshing to hear a new musical for the first time and also harder to judge the songs as so often they grow on you the more you hear them.  My first impressions are that I would have liked to have heard more of the original theme tune (I’m not sure if the omission is due to license or artistic reasons.  Interestingly the original theme tune will become public domain in 2059).  However I admire them for pulling off the musical show only using a few clips of “Duh duh da da” for which the audience heartily joined in with the clicks (I also noticed some clapping) every time.

My favourite songs were Pulled, sang beautifully by Carrie,  Crazier Than You and When You’re An Addams.  These are the three that I found myself singing after the show and the following day.  The varied voices as the actors sing in strong character style all blend together in harmony.  In true Gomez and Morticia style there is of course a tango – “Tango de Amor”.  As they begin Gomez declares “You have legs!” to Morticia and then they perfect the dance of love and passion.  It was a joy to watch and there are rumours that Samantha Womack may be heading to Strictly Come Dancing this year. 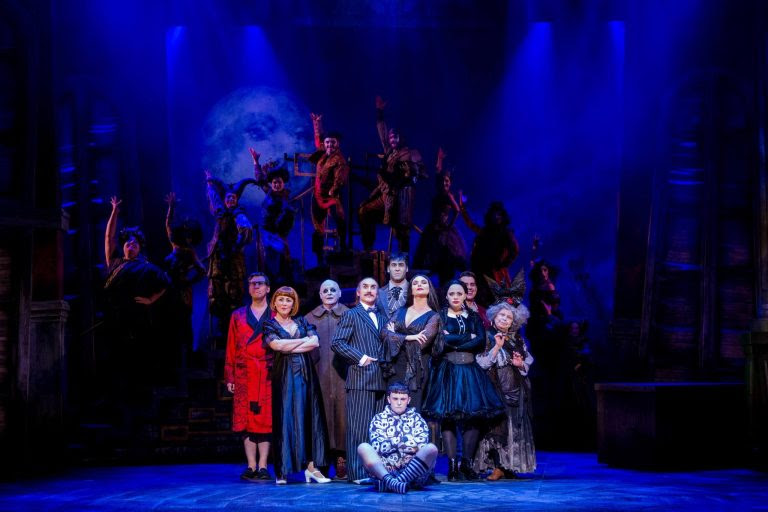 The cast were all incredible.  Carrie Hope Fletcher is a woman of so many talents- acting, dancing, singing, writing, vlogging and  so much more (she is still “in talks” about a musical that she wrote with her brother, Tom Fletcher). It’s hard to believe she is only 24 years old.  She truly makes this character of Wednesday Addams in love her own and her voice is absolute perfection.

Cameron Blakely brings wit, humour, passion and also compassion to his role as Gomez.  Listen to his performance of “Not Today” below.  It’s truly outstanding.

Comparing the previews of earlier performances to the current, Samantha Womack has really gained confidence in her performance of Morticia in the musical.  Apart from that amazing jawline and those cheekbones she was unrecognisable as herself and was a very poised stage presence with a stunning voice and fabulous dancing.

Les Dennis was also completely unrecognisable as the incorrigible Uncle Fester.  The audience loved him, especially as in his role as narrator he could make some pantomime style puns directly to the audience.  I loved Les Dennis’ humour as a child- in particular his Mavis impression so it was great to see a new generation of children (as well as adults of course) appreciating his comic talents too.

Dickon Gough was great as Lurch- the slow movements and deeeeep voice were spot on, although it must be said that he saves the best for last- he had the audience in stitches at the end of the show.

Dale Rapley. Charlotte Page and Oliver Ormson are a stellar cast as the Beinekes and I have to mention the ancestors:  Kathryn Barnes, Jessica Buckby, Perola Congo, Christopher D Hunt, Gavin Eden, Jacob Fisher, Kirsty Ingram, Rhona McGregor, Scott Paige and Jak Skelly as they were all amazing.

“Thing” also made an appearance at one point playing the banjo with Uncle Fester, although Cousin Itt does not (maybe he’s in the chimney throughout!).

The cast put their heart and soul into their roles and I wish them all the best with the rest of the tour! 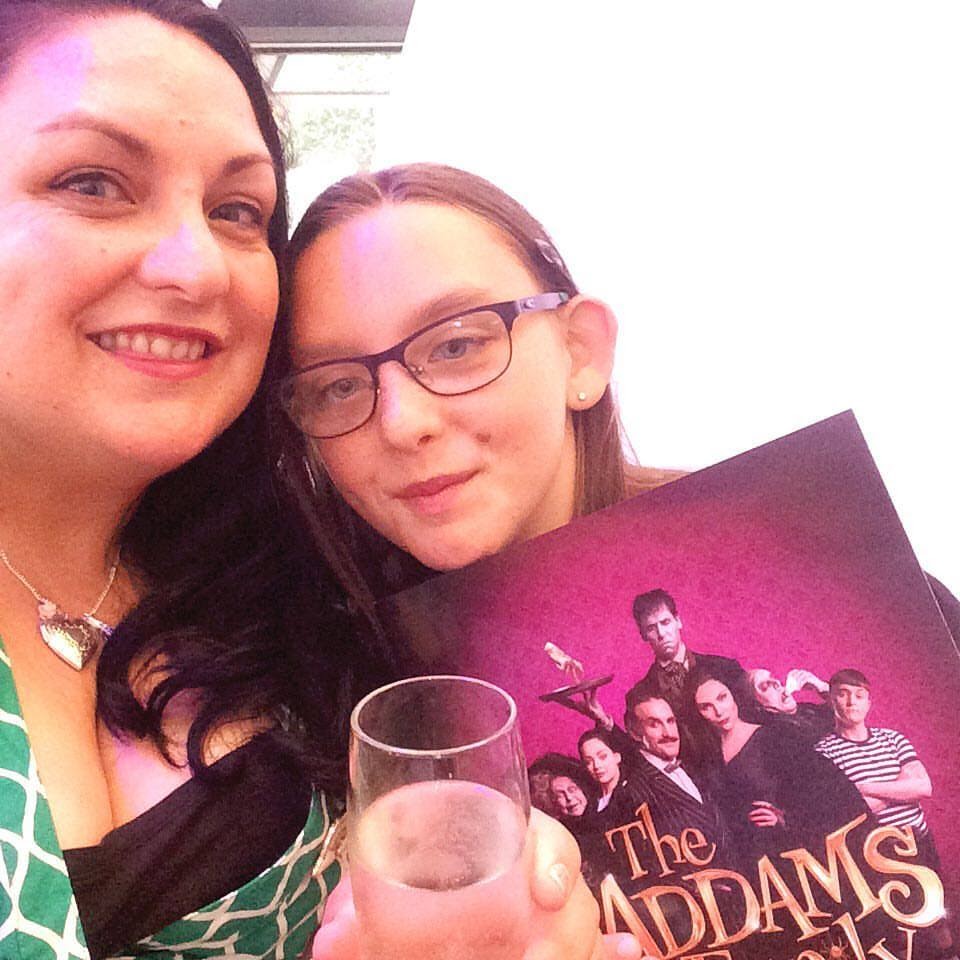 We thoroughly enjoyed The Addams Family: The Musical Comedy.  It’s suitable for children from age 7 years and up.  I know my 8 year old would have loved it and my ten year old cetainly did!  It’s not scary but there are some sexual references.  Just as pantomime is a great way of introducing children to live theatre, I think The Addams Family makes a great first introduction to musicals with all the pizzazz of a Broadway Musical at that.


I can also see this musical becoming a cult musical for families, many audience members dress up and the message of being yourself, quirks and all will always be an important one.

“Normal is an illusion. What is normal for the spider is chaos for the fly.”

“The whole show is about “What is normal?” – everyone’s idea of it is different, so normal doesn’t really exist. You should do whatever feels natural and not worry about conforming or being judged. I think that’s a really positive message.”

I thought the cast, creatives and orchestra deserved a full standing ovation for the Wednesday (the day of the week in this instance) performance, I myself stood and gave them a hearty applause but the majority of the audience remained seated.  This could possibly have been down to many first time theatre goers being attracted to the show due to the cult films.  I know recently I’ve encountered fellow audience members who truly don’t understand standing ovations (indeed I was recently tapped and shouted at to sit down during a much deserved standing ovation for Billy Elliott) and others who because of the  current exceptionally high standards of live theatre reserve their standing ovation for very few performances.


Sadly, we couldn’t head to the stage door to congratulate the cast after the show as we were determined not to miss the last train out of Cardiff Bay but thank you for a funny, feel good, amazing musical show!


The Addams Family:  The Family Musical Tour continues at Wales Millennium Centre until 12th August and then travels to Dublin from 15th – 26th August (find all tour dates here).

We received a pair of tickets for purposes of review.