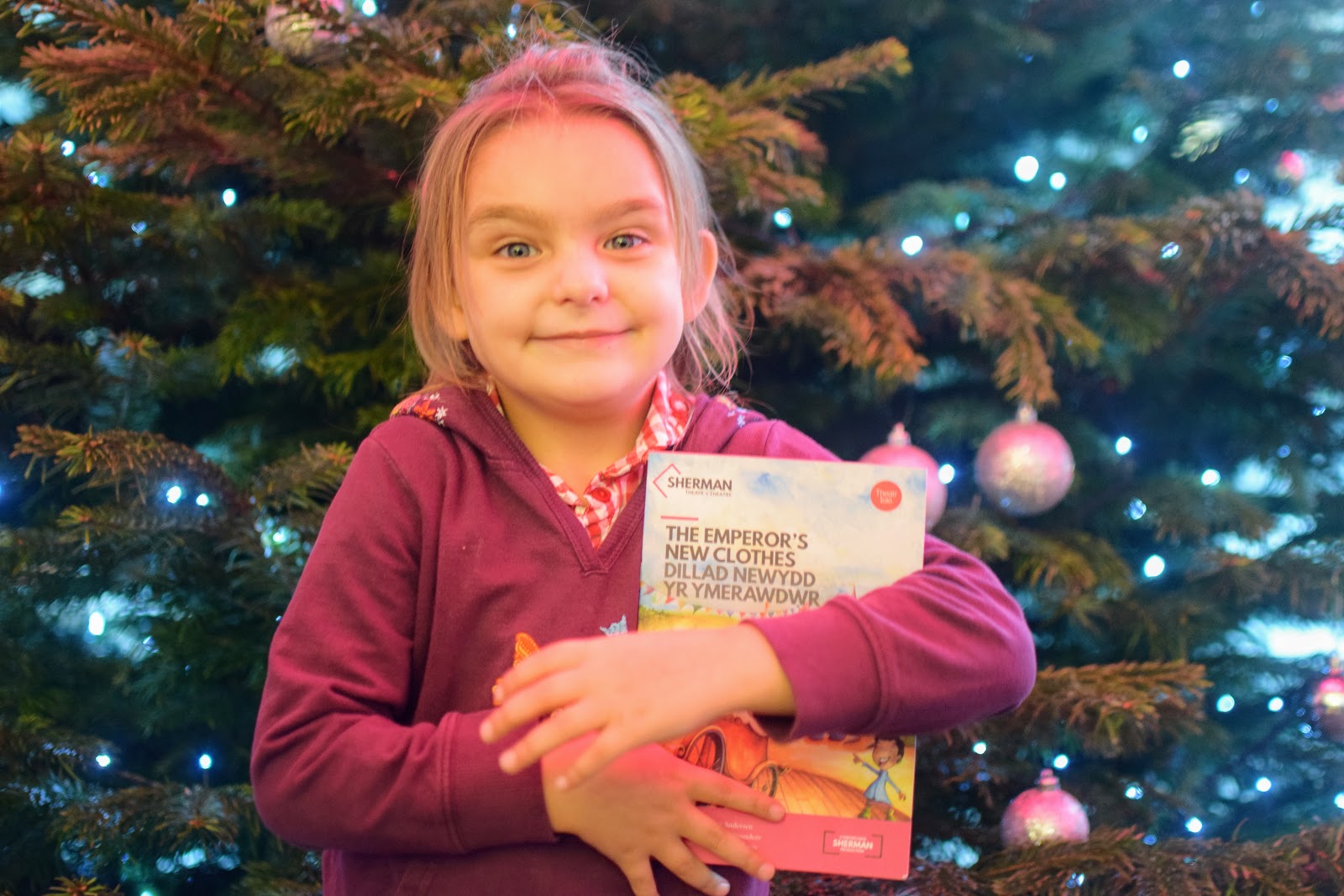 The Emperor’s New Clothes was one of my favourite tales while growing up.  I remember listening to Bernard Cribbin’s retelling of the story on the (popular in the 80’s) “Story Teller‘s Tape” (remember them?), while reading the text and admiring the brightly coloured illustrations. 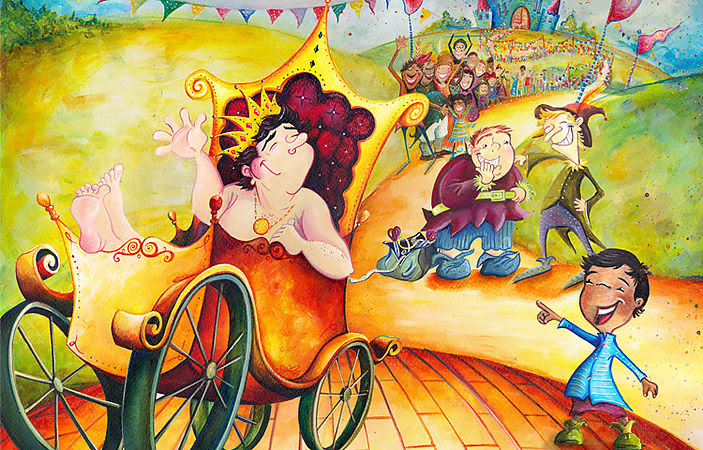 This Christmas Theatr Iolo are bringing the Hans Christian Anderson classic to life at the Sherman Theatre.  Theatr Iolo are well known for putting the child into the heart of all their shows and Alun Saunder’s adaptation is no exception.  We walked into the Studio Theatre to find the stage floor in the centre of the room with benches and mats at either side for families to view and enjoy the show.  I chose a front bench so I had the comfort of a chair with the option to lower myself onto the mat with Isabelle if needed.  The set, designed by Charlotte Neville, was simple and effective with sumptuous clothes hanging from the balcony and the stairs.  The actors interacted with the young audience and encouraged them to sit forward on the mats. 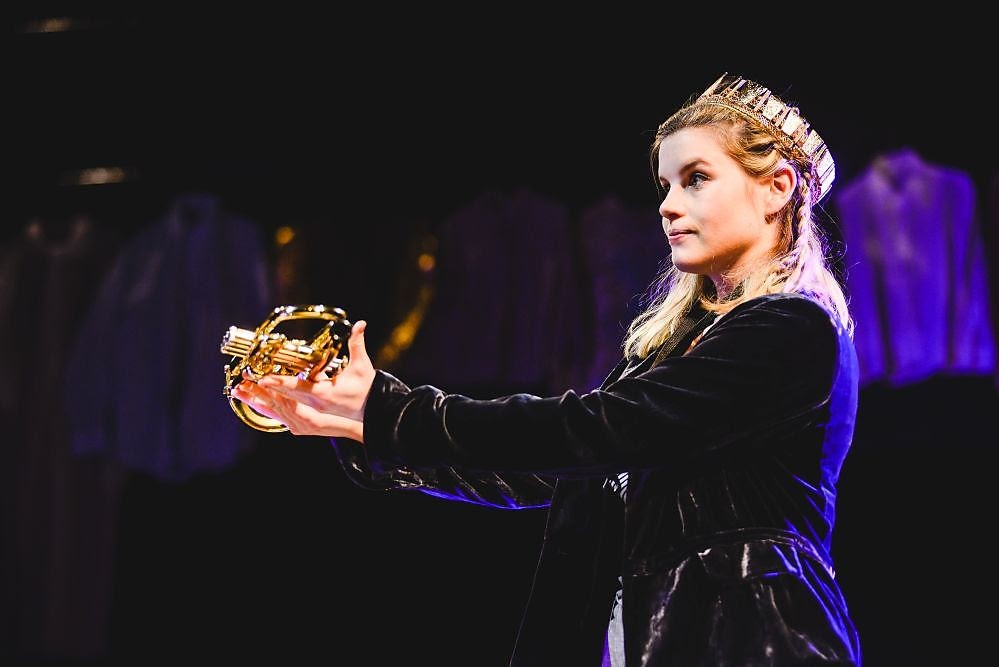 Have you ever lost something? A toy? A tooth? A memory?

What if, one day, you lost all of your ‘silly’?

When the Emperor demands the coolest clothes to help him be, well, ‘cool’… The call is answered by a pair of wily Weavers, who concoct a cunning plan and land everyone in an embarrassing situation. Who will help the Emperor rediscover his joy and silliness?

Made especially for 3 – 6 year olds and their families. 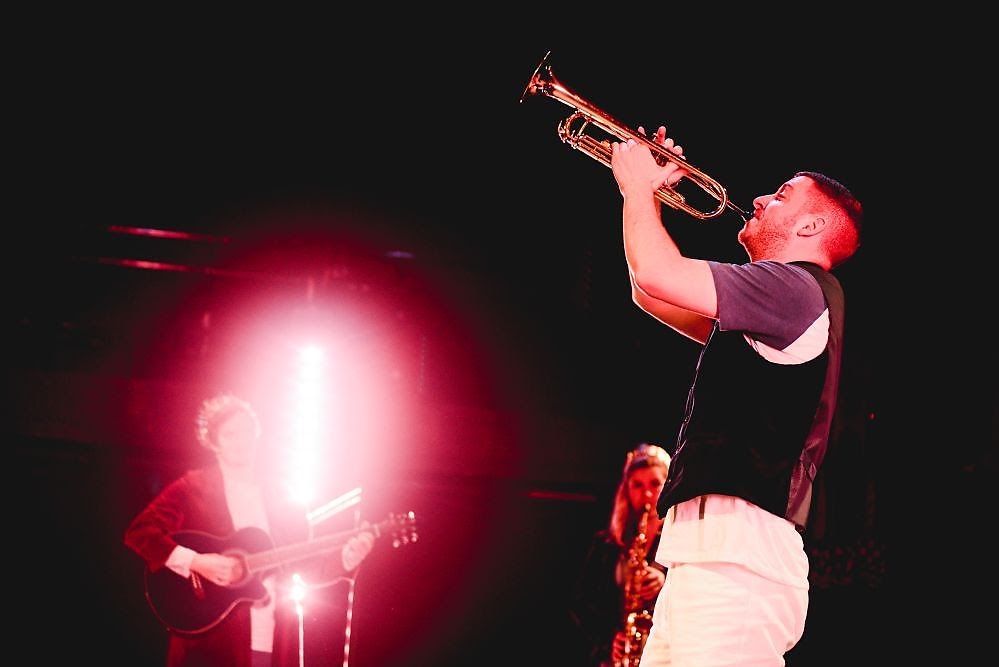 This production, directed by Kevin Lewis, is character and story driven rather there being an emphasis on time and place and for the first time (in my experience) gives us the backstory as to how the Emperor began his fascination with “new clothes”.  Indeed, the story begins, even before a young Kare (Geraint Rhys Edwards) understands what an Emperor is or what an Emperor does.  The explanation given by his mum, Mor (Elin Phillips) is of course, for the benefit of the young viewers as well as Kare. 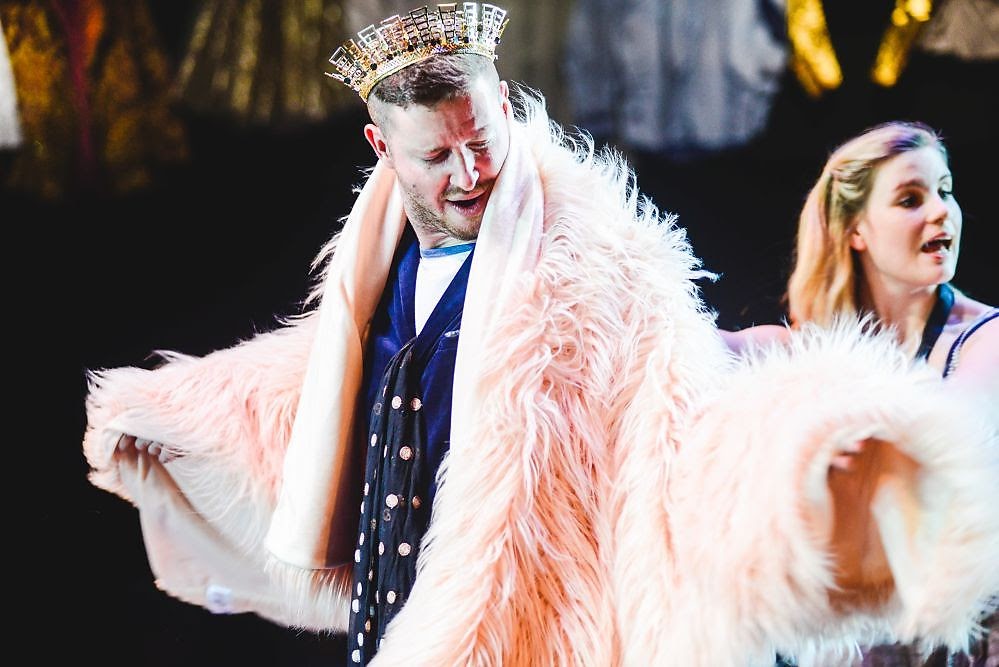 The three strong cast (Kare, Mor and Far played by Tobias Weatherburn) put on a brilliant performance with convincing childlike acting from Edwards, a seamless character change from Phillips and Weatherburn from ruling parents to tailors, wonderful singing voices and even being talented musicians playing all of the instruments used in the show.  Every action and movement (directed by Jem Treays from Jem and Ella) is purposeful and effective. 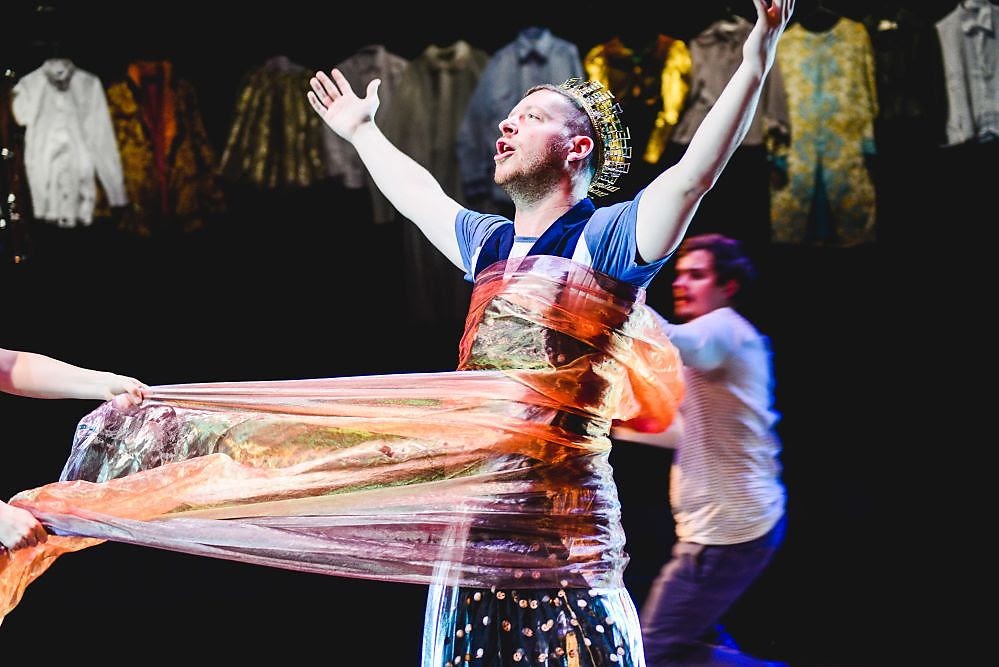 Most meaningful were the feelings displayed.  Even the youngest audience could empathise with a sad Kare as we see the events that made him the sad Emperor that he cheerlessly became. 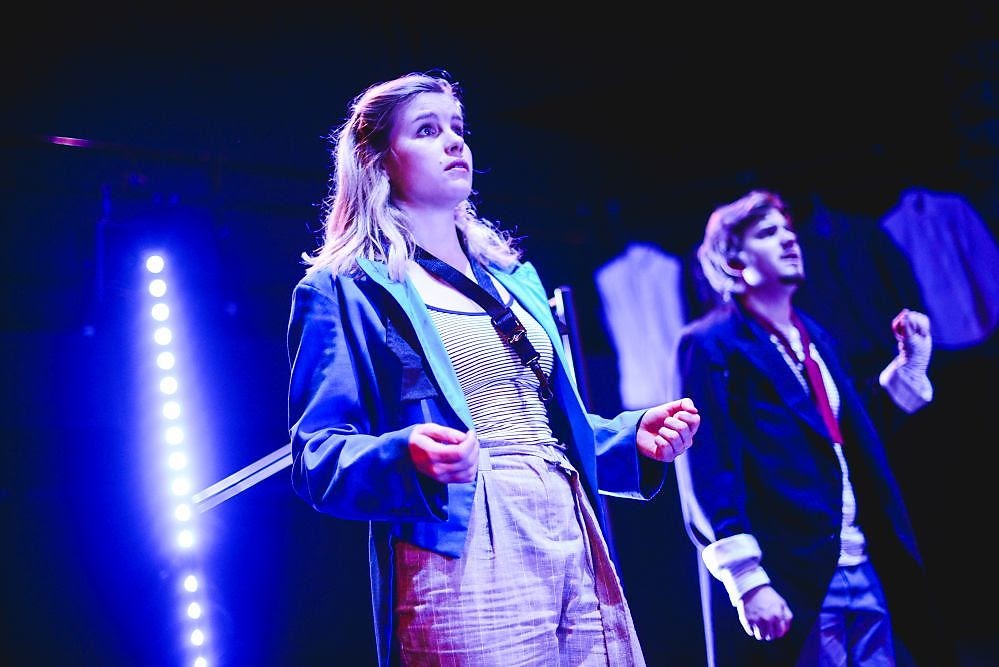 One important lesson that our Emperor learns throughout the story resonates with us all because as the writer says “no matter how young or un-young we are, we must always laugh at ourselves!” 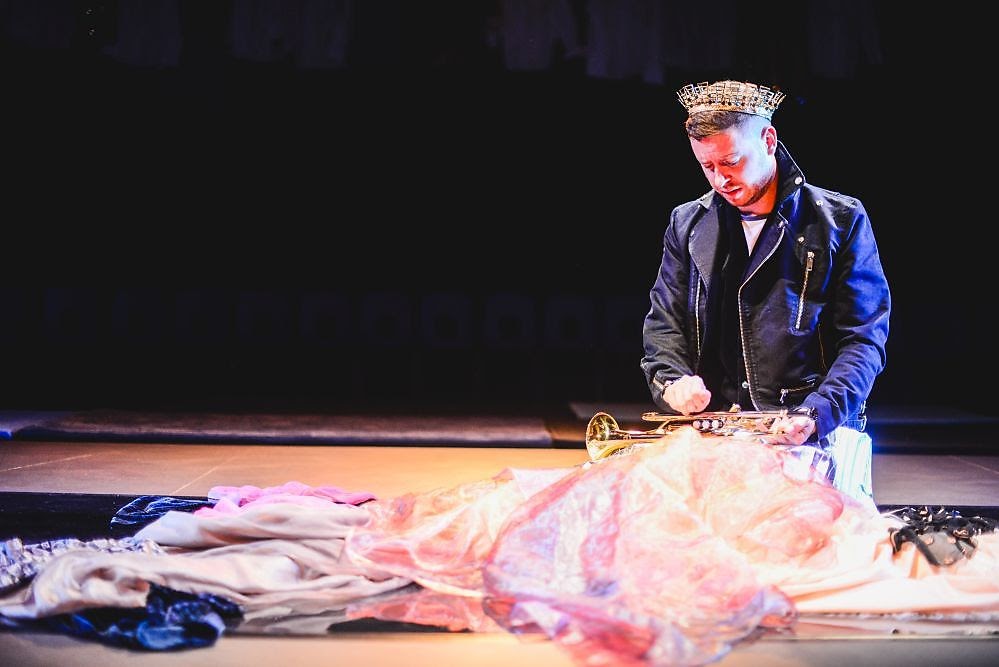 But without even realising, we, the audience, are also being reminded that all people, rulers or not, are the same underneath and begin the same way as innocent children.  It is the hand that life deals them that informs the person they become. 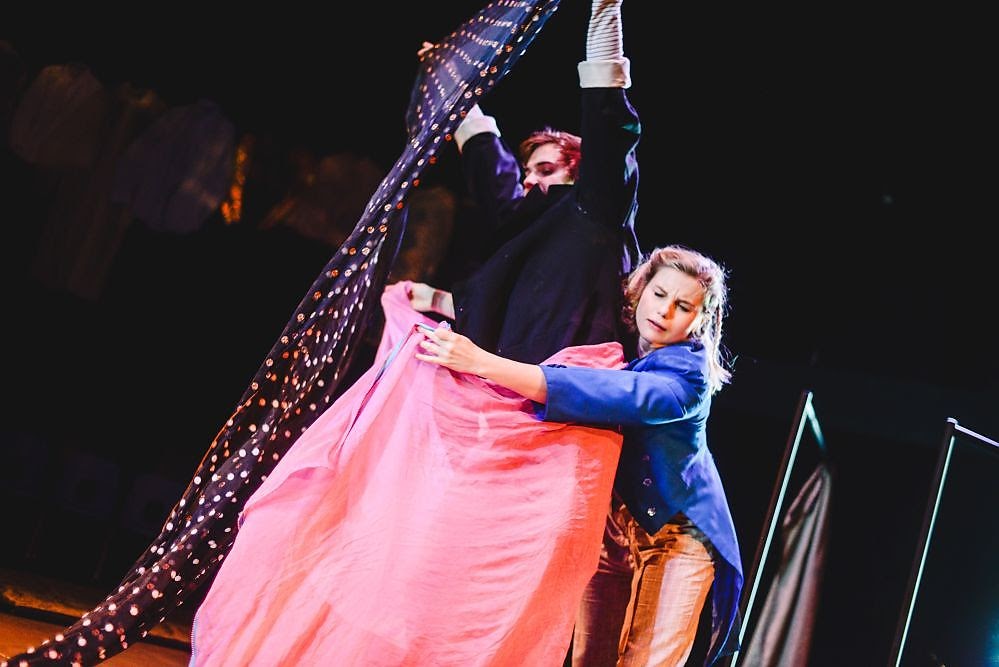 Another strong message comes through when Kare thanks the crooked tailors instead of punishing them for fooling him as he realises the life lesson they have taught him.


Kare has learnt not to pout or frown, but to laugh and be silly.  We all embraced our “silly” and joined in singing the title song, “The Emperor’s New Clothes” (which was very easy to remember as those four words were the only lyrics!).  Izzy and I continued to sing it walking through the rain and puddles back to the train station while wholeheartedly laughing at ourselves, as Mor and Far always say and Kare eventually learnt,

“It’s important to laugh at yourself or somebody else will do it for you.”

Isabelle and I really enjoyed this show and despite it being aimed at 3-6 year olds, I know my older children would have enjoyed it too.  In true Christmas show style, Isabelle loved the “magic” that fell from the theatre roof at the end!

The Emperor’s New Clothes is at the Sherman Theatre until 31st  December.  Tickets cost £8 with discounts for members of the Sherman 5.

Press Tickets were supplied for the purpose of this review- thank you!