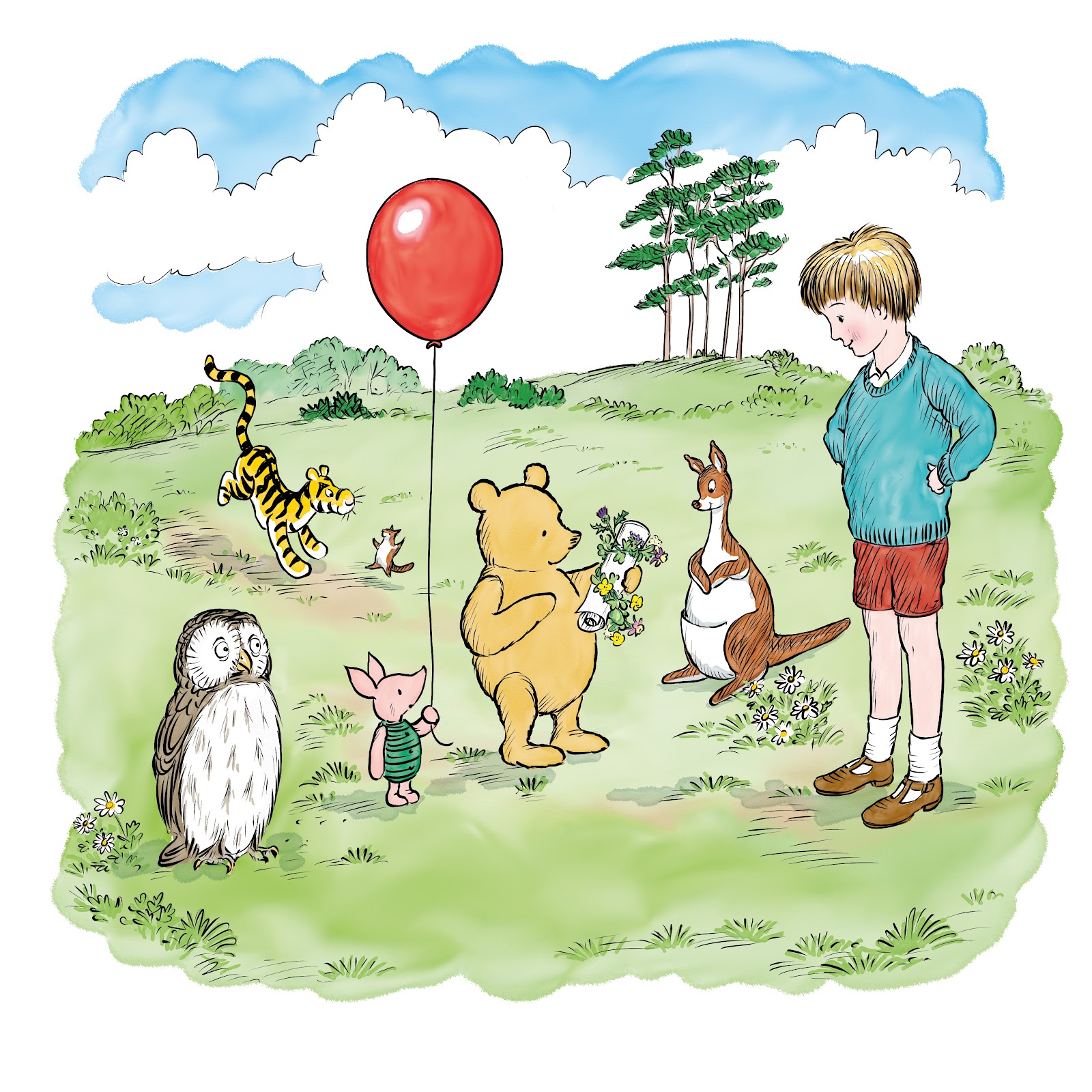 “Bear,” announced Christopher Robin solemnly. “That hum is fit for a Queen. That hum shall be The Queen’s present. Owl shall write it out and you and I and Eeyore shall deliver it to Buckingham Palace. And Piglet must come too because London is a very big place indeed and even small animals, if they are very good friends, can make everything alright.”

As soon as I saw these charming illustrations and the chance of a free online book and audio video, I had to share them with you.  I can’t wait to read this story with my children tonight- enjoy: 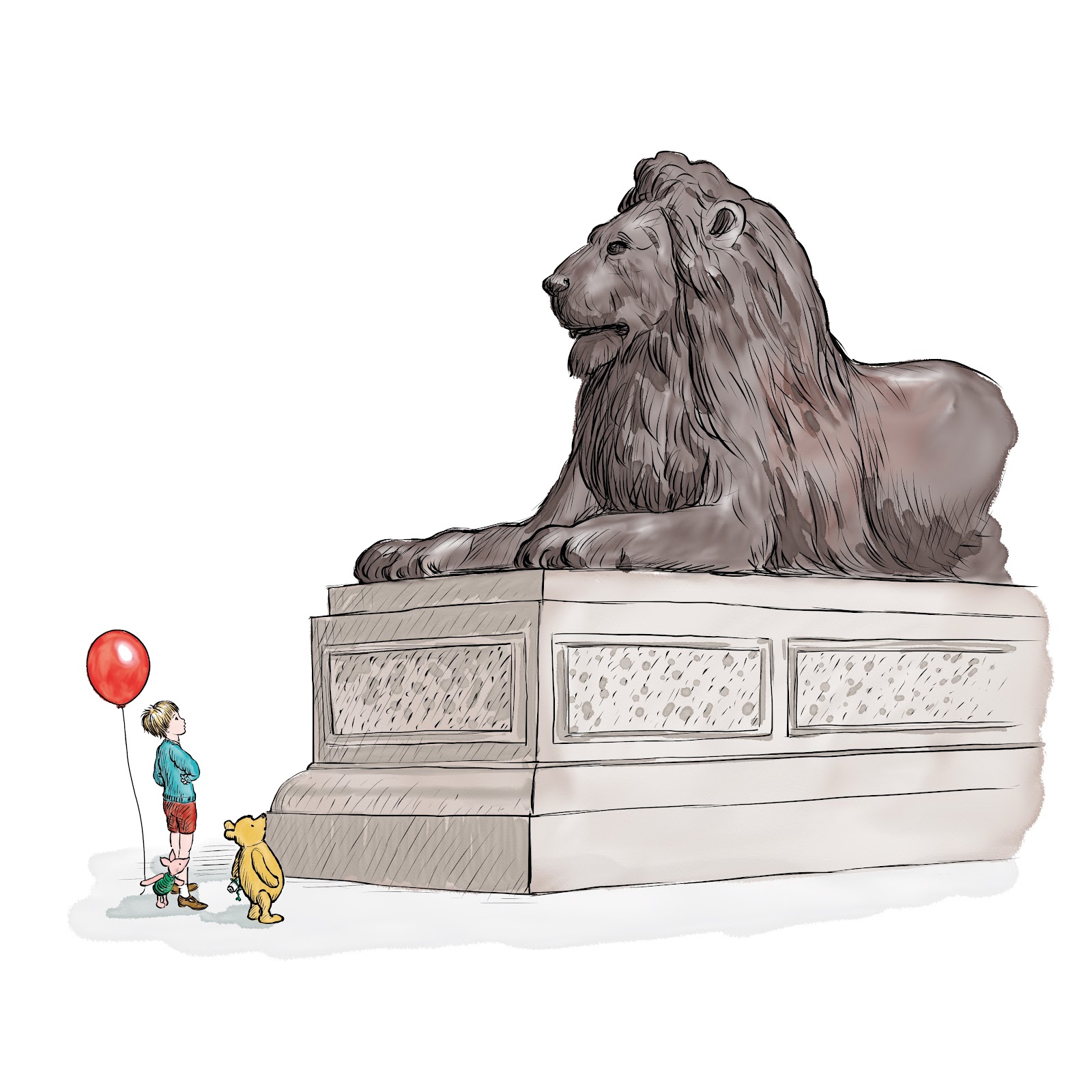 To celebrate 90 years of two much-loved British icons, Winnie-the-Pooh and the Royal Birthday is released today as a brand new illustrated and audio adventure, narrated by Oscar winning actor Jim Broadbent and available for free at www.Disney.co.uk/WinnieRoyalBirthday. 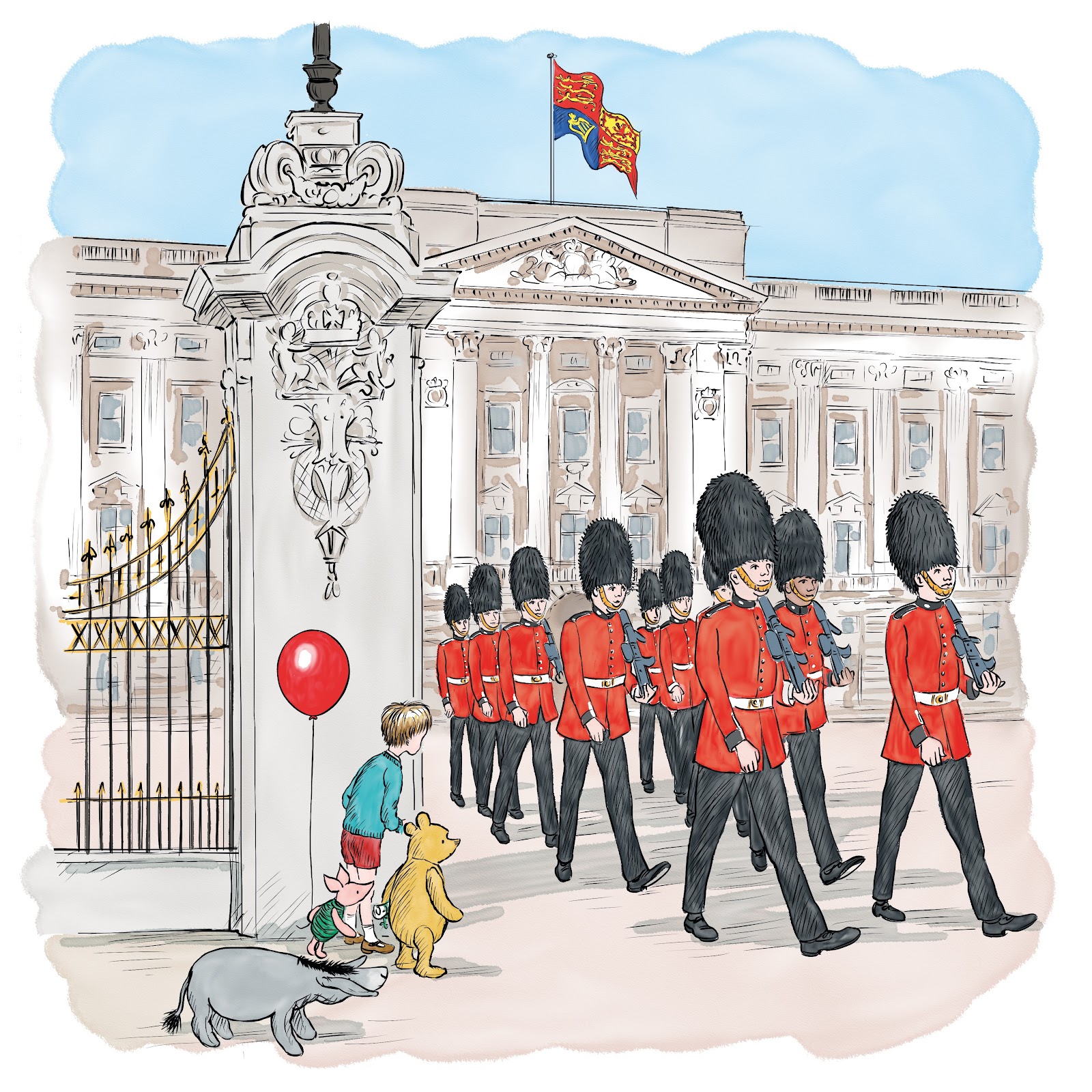 This brand new story has been specially written by Jane Riordan, to celebrate the upcoming official 90th birthday celebrations of Her Majesty The Queen, and also Winnie-the-Pooh’s 90th anniversary, with October 2016 marking 90 years since his first publication and arrival in the Hundred Acre Wood. 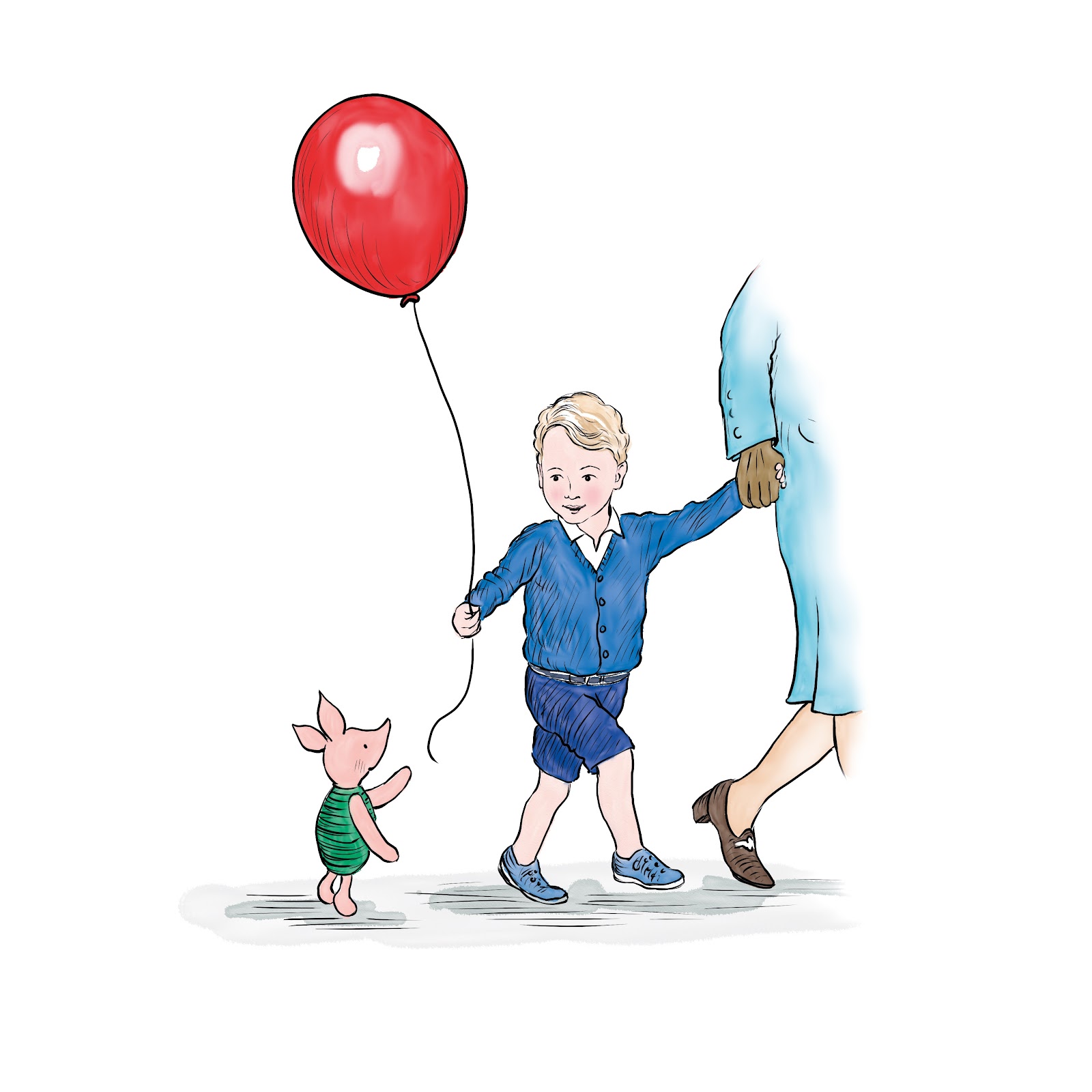 Featuring Pooh’s first ever meeting of the Royal Family, the tale beautifully presents the loveable bear and his friends embarking on an unforgettable journey from the Hundred Acre Wood to London with the wish of delivering their own thoughtful 90th birthday presents to The Queen.  Illustrations drawn in the classic E.H. Shepard style by Mark Burgess see the nation’s favourite bear and friends travelling through London on an open-top bus, taking in the sights including Trafalgar Square and Buckingham Palace guards, before a chance meeting with The Queen, which allows Pooh to present their birthday gifts. 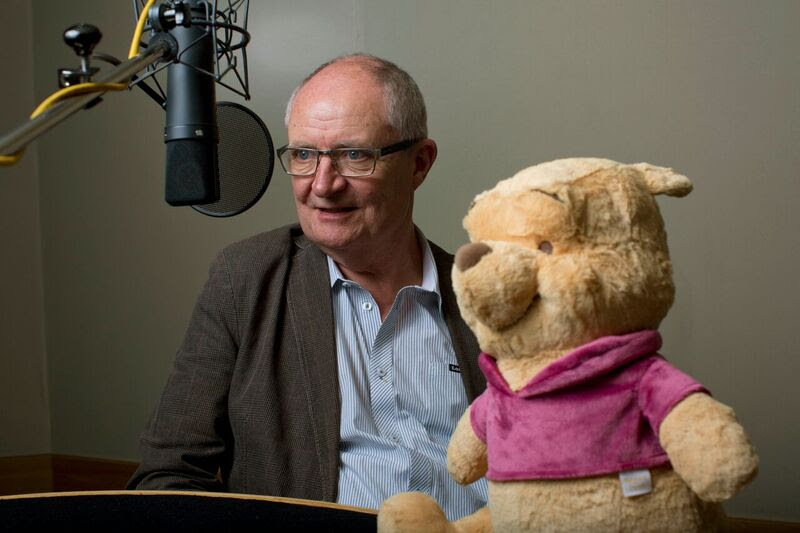 Jim Broadbent, who narrated the audiobook of the new short adventure, says:

“I have been a fan of Winnie-the-Pooh since I was a boy, in fact I named my very first and much loved teddy ‘Pooh’ and that can only have been after the A. A. Milne character.  I’ve loved being part of this story to celebrate The Queen’s 90th birthday and Winnie-the-Pooh’s 90th anniversary; it’s been an honour to narrate such an iconic story and I want to wish both Her Majesty The Queen and Winnie-the-Pooh a very Happy 90th!” 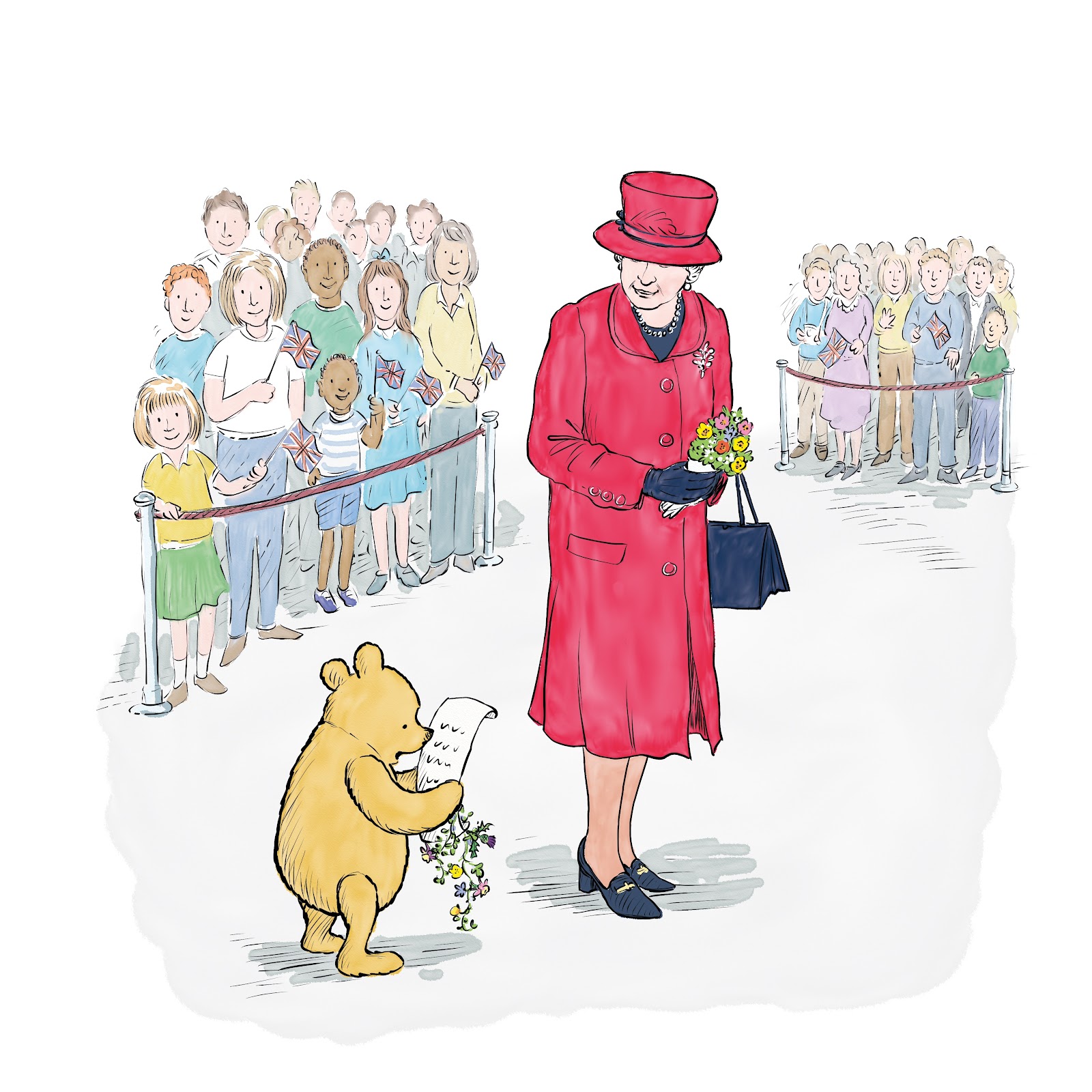 Winnie-the-Pooh has had previous links with Her Majesty The Queen, with The Duke and The Duchess of York being presented with a Christopher Robin china nursery set with hand-coloured pictures of Christopher Robin, Pooh and friends, as a gift for a young Princess Elizabeth, who is believed to have loved the Winnie-the-Pooh stories as a child.  The 1926 A. A. Milne book, Teddy Bear and the Other Songs from When We Were Very Young, was also dedicated to Princess Elizabeth upon her birth when it was published – though the new adventure is the first time the much-loved bear has ‘met’ Her Majesty in one of the Winnie-the-Pooh stories. 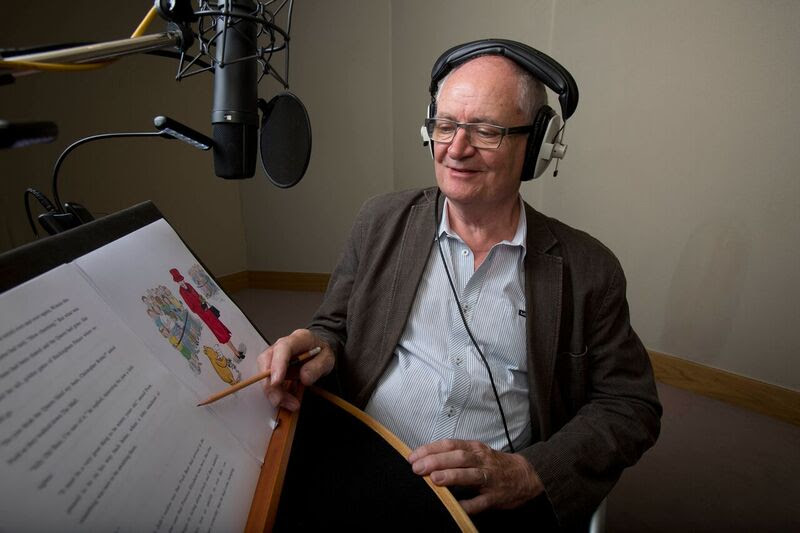 “We couldn’t think of a better way to celebrate The Queen’s birthday in the same year that marks Pooh’s 90th year in Hundred Acre Wood but with this lovely royal adventure. This is a celebration of two very British icons that have been part of our British heritage for 90 years.”