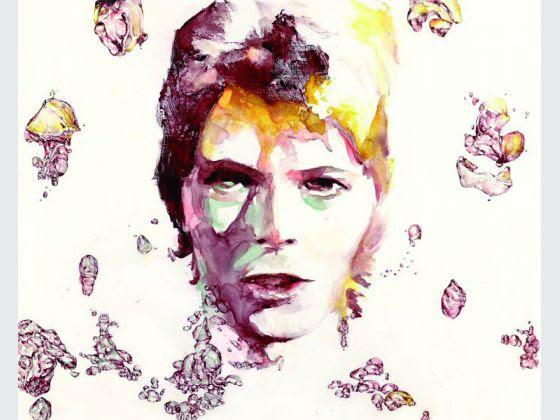 I am still getting over the shocking news of David Bowie’s death (it feels very strange to even type those words).

Like many fans, I’ve spent the day listening to his music and watching his videos.  No doubt we’ll sit down and watch Labyrinth again too.  Today, I’ve just felt numb and in disbelief.

The first time that I knowingly heard and saw David Bowie perform was in 1985, when I was just five years old.  The video of Bowie and Mick Jagger performing their version of Dancing in the Street was shown on Live Aid.  My sister and I immediately took to the energetic performance and danced away copying Bowie and Jagger’s moves.  I then took to singing the song everywhere, changing the lyrics appropriately:  “Dancing in the car, school…and so on.”

Then of course, as a six year old I watched him play The Goblin King in Labyrinth, innocently unaware that his successful career had actually began twenty years earlier (don’t worry this was rectified as I grew older).  He always seemed ageless and timeless just as his music and work will always sound fresh and new.

To commemorate the life and works of David Bowie (8 January 1947 – 10 January 2016), music licensing company PPL has released an official chart of the Most Played David Bowie Tracks of the 21st Century.

Read on to find out which tracks made the chart and I suggest you listen to them and watch the videos too.

David Bowie’s top 20 most played tracks span three decades of recordings with the earliest, Space Oddity, released in 1969, appearing in the chart at number seven, and Absolute Beginners, released in 1986, at number 19.

Over the course of the 21st Century, David Bowie received over 360 million seconds of radio and TV airplay in the UK.

PPL Most Played David Bowie Tracks of the 21st Century:

2. Under Pressure, David Bowie and Queen

18. Dancing in the Street, David Bowie and Mick Jagger

I found the list very interesting.  Did any of the chart listings surprise you?  I wonder how they will change in the next coming year.

If you haven’t already then I highly recommend you buy his latest album Blackstar and take a look at his latest video, his final goodbye, Lazurus.

Look up here, I’m in heaven

I’ve got scars that can’t be seen

I’ve got drama, can’t be stolen

Everybody knows me now

One of my favourite messages I have read today was tweeted by Dean Podesta):

If you’re ever sad, just remember the world is 4.543 billion years old and you somehow managed to exist at the same time as David Bowie.

David Bowie: In His Own Words will be released on 22nd January 2016 and is available to pre-order now.