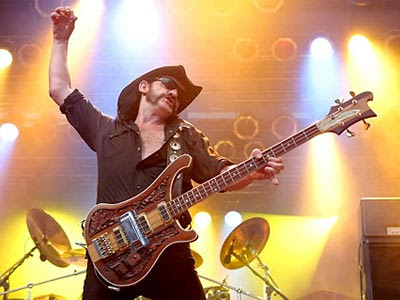 On the morning of 29th December 2015, I woke to the news that Ian “Lemmy” Kilmister, frontman, Bass player and founder member of the band Motörhead had sadly passed away.


This was a huge shock as he and the band have had a constant presence and influence in my life which began when I was 11 years old.  My first real experience of seeing and hearing Lemmy and Motörhead was them performing their infamous song “Ace of Spades” on the BBC anarchic comedy series The Young Ones (Rik Mayall R.I.P, Adrian Edmonson, Nigel Planer, Christopher Ryan)

I can remember being transfixed to the television as this thunderous noise erupted from the speakers, forced itself through my ears and into my brain.
My musical tastes were still a bit all over the place at this point but something about that performance had stuck with me, I was hooked but didn’t quite know it yet.

Fast forward a few years later to a brief visit from some family from Nottingham including an older cousin (who I hadn’t seen for a while), after the usual pleasantries had been exchanged with my aunt and uncle, me and my cousin got to have a bit of a catch up and while chatting I notice his T-shirt (it was the iconic Motörhead “England” one), it looked amazing and I remember thinking I’ve got to get one of them (my interest in Motörhead had been rekindled).


By my mid teens my musical tastes had firmly rooted themselves in the Rock/Heavy Metal genres and many a Saturday afternoon was spent buying or listening to as much hard and heavy music as I could get hold of, as well as bands like Iron Maiden, Metallica, Anthrax and Black Sabbath, my Motörhead tape collection was growing steadily bigger.


While many people describe them as a heavy metal band, Lemmy was always adamant that Motörhead are a fast and loud Rock “n” Roll band, they straddled the gap between Rock, Punk & Metal and influenced so many bands which I still love today (The Wildhearts, Therapy?, The Almighty & many more). 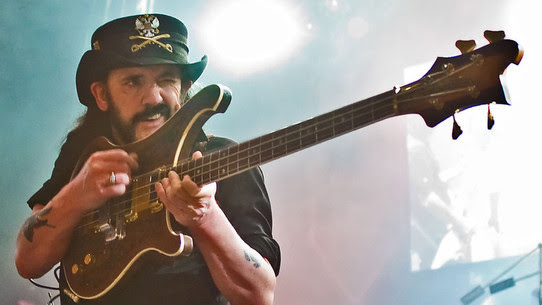 I was lucky enough to see Motörhead live a few times at various festivals over the years and was never disappointed.

Lemmy and Steve Harris (Iron Maiden) were the two main influences for me to pick up a bass guitar and learn to play, they still influence my playing today.


Born 24th December 1945 in Stoke on Trent, UK
Played in several bands in the 60’s including The Rockin’ Vickers
Was a Roadie for Jimi Hendrix
Joined Hawkwind in 1971 & sang on their hit “Silver Machine”
Fired from Hawkwind & formed Motörhead in 1975
Released Motörhead’s self titled debut album in 1977
“Ace of Spades” single released in 1980
Released 22 Motörhead studio albums (“Bad Magic” released 2015)


As well as the album releases, film appearances and constant touring (last of which finished few weeks before his 70th birthday), Lemmy was renowned for his straight ahead no compromise attitude, honesty, great sense of humour, love of Jack Daniels & Coke (which he reportedly drank a bottle of a day from the age of 30 up to 68) and collection of German war memorabilia.


A Memorial service in celebration of his life was broadcast on YouTube.  It was very emotional and touching watching his family & friends sharing stories about him.

The words below are taken from the song “Ace of Spades” and for me they sum up the rock ‘n’ roll attitude to life, however I think Lemmy will live forever in the hearts & minds of all who have been touched by his music and personality.

“You know I’m born to lose, and gambling’s for fools,

I don’t wanna live for ever”

“Born to Lose, Lived To Win”