“For the past 35 years, one of my greatest pleasures has been to see Star Wars passed from one generation to the next. It’s now time for me to pass Star Wars on to a new generation of filmmakers.“
―George Lucas

I’m sure you’re aware that the new Star Wars movie was released last week.  There has been some excitement over it in the media and lots of excitement in our house alone. Since writing this post Star Wars:  The Force Awakens has become the biggest #1 UK Movie of all time.  Globally the film has already made over £1.59 billion worldwide and this week became the biggest release at the US box office overtaking Avatar.

Today Dave takes over the blog to explain what seeing the new Star Wars film, Star Wars: The Force Awakens, with our children, meant to him.. over to Dave:

“A long long time ago in a galaxy far far away….

Well, to be exact 32 years ago (1983) in our local cinema, the Torch Theatre.  The 10 year old me was mesmerised by Star Wars: Return of the Jedi. It was to be the final instalment of the original Star Wars trilogy.

I had seen the previous two films, Star Wars: A New Hope (1977) and The Empire Strikes Back (1980) on television, I had the toys, I spent countless hours using them to re-enact the films with my brother and our friends, getting patched up and told off for our over enthusiastic lightsaber battles and generally loving everything about the Star Wars universe.

But that day 32 years ago was different, it was the first time I had seen a Star Wars film the way (I think) it should be seen, on a huge screen with booming sound surrounded by  people who love it as much as you do.

It would be 16 years later that the first of the three new Star Wars films would be released, these are the infamous prequels to the original trilogy. The Phantom Menace (1999), Attack of the Clones (2002) and Revenge of the Sith (2005), while these were a bit hit and miss they still reminded me how much the original films had stayed with me from my childhood and re-ignited questions and conversations between my friends and I about all that had happened to the iconic characters we had come to care so much about.

While our kids have been fully educated in all things Star Wars and many hours spent building and playing with Star Wars LEGO sets and toys has kept both them and the inner child in me entertained, I was still hoping that one day we would be able to take them to see a new Star Wars film and for them to experience the thrill I had all them years ago.

We fast forward to 2015 and the release of Star Wars: The Force Awakens & maybe get to find out the answers to some of those questions. With Disney at the helm of advertising, marketing & distribution of the new films it was hard not to get excited and caught up in the lead up to it’s release and with the way social media is these days hard to avoid spoilers, but we managed. 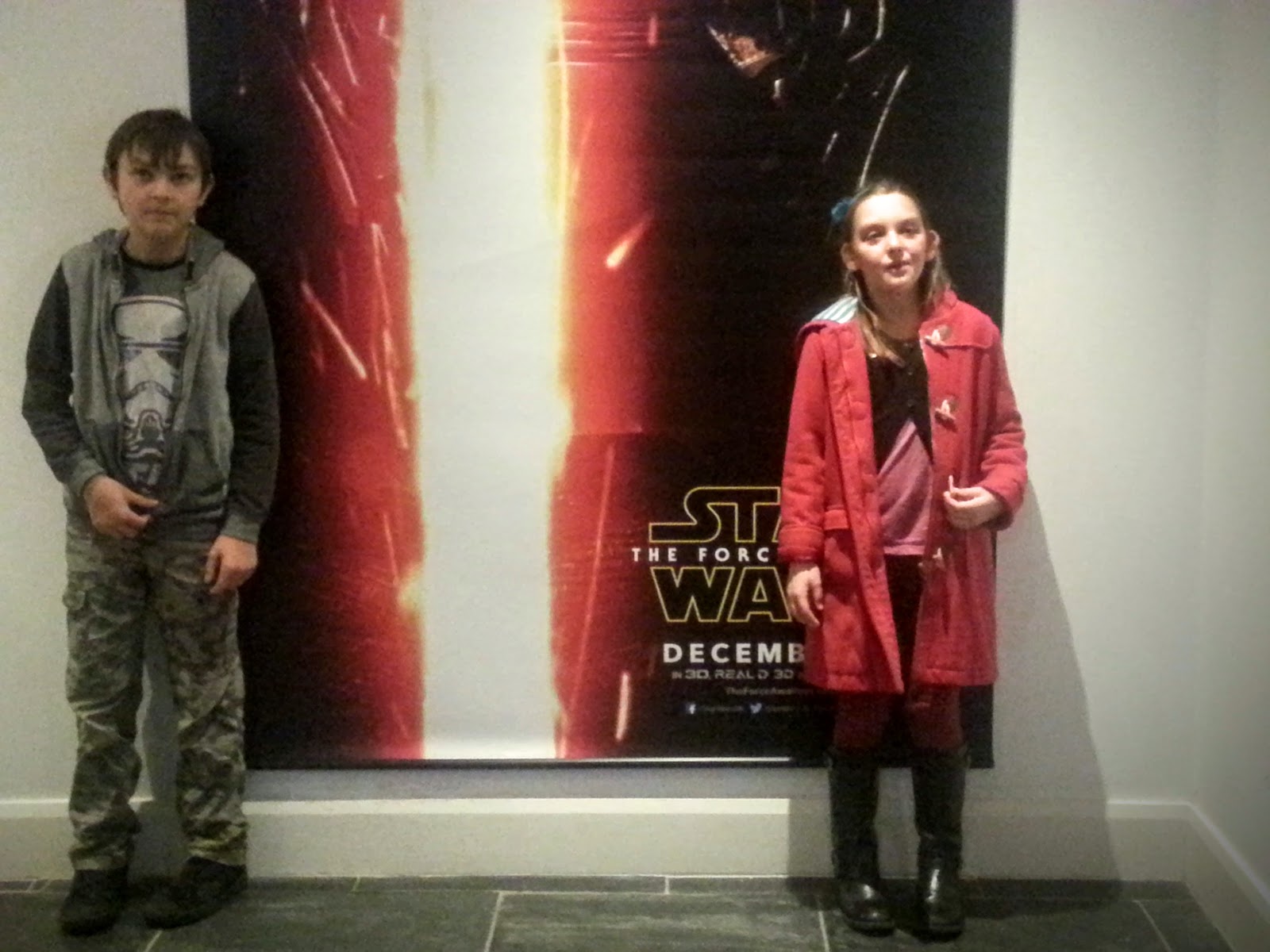 The day had arrived Me, Claire, Danny, Rebecca & Caitlyn were ready to take it all in (we dropped Isabelle off to stay with her grand and great grandparents where she entertained them with her full repertoire of Christmas songs).

Armed with our various snacks and drinks we sat down and waited, the lights dimmed, the iconic theme music started and the scrolling prologue appeared I was transported back to the same feelings that 10 year old me first had all them years ago, the film was everything I’d hoped it would be and more.  While watching it, I was aware of myself checking if the kids were enjoying it as much as I was, they were glued to the screen, we’ve watched many films together before and while they are normally well behaved, most of the time the film is normally interrupted with A) questions about what’s happening B) requests for the toilet and C) squabbles over sweets/snacks or a mix of all three, however apart from Rebecca being a little scared in one or two places there was no hint of any of the usual interruptions.

On the way home there was lots of excited talk of what we had just seen and what was going to happen next, there are another two films currently due for release 2017 and 2019 as yet untitled and we can’t wait for them. I am so happy that they had a similar experience to the 10 year old me and it feels like I’ve handed the torch (or Lightsaber) on to them.

May the force be with you.”


Have you seen the film yet?  If not, you can see the trailer here:

The film is being produced by Kathleen Kennedy, J.J. Abrams, and Bryan Burk, and John Williams returns as the composer.