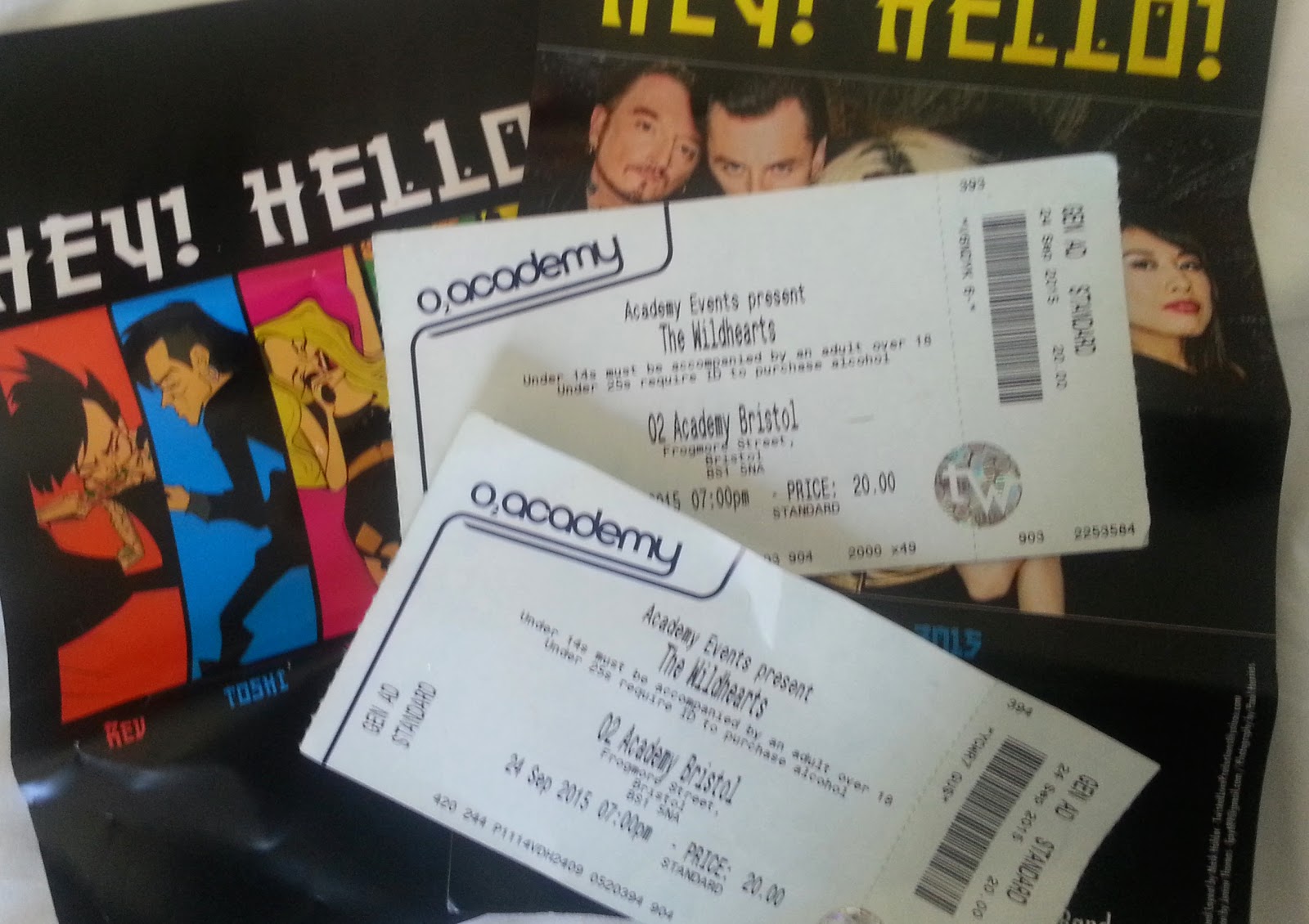 Hey!  Hello!  We had a great time in Bristol watching Hey! Hello!, Baby Chaos and The Wildhearts at the O2 Academy. 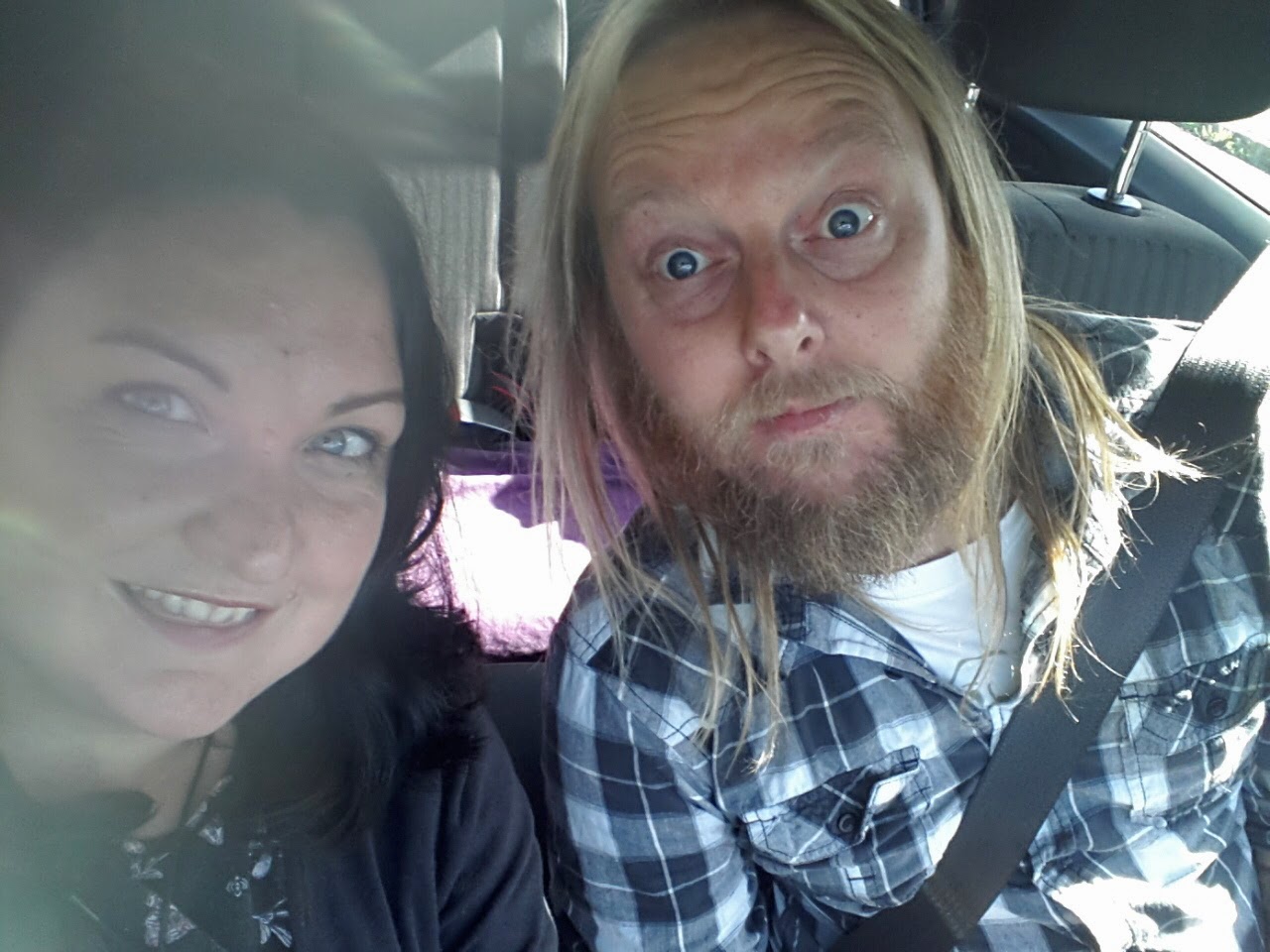 We set off on our journey to Bristol.  First there were two… 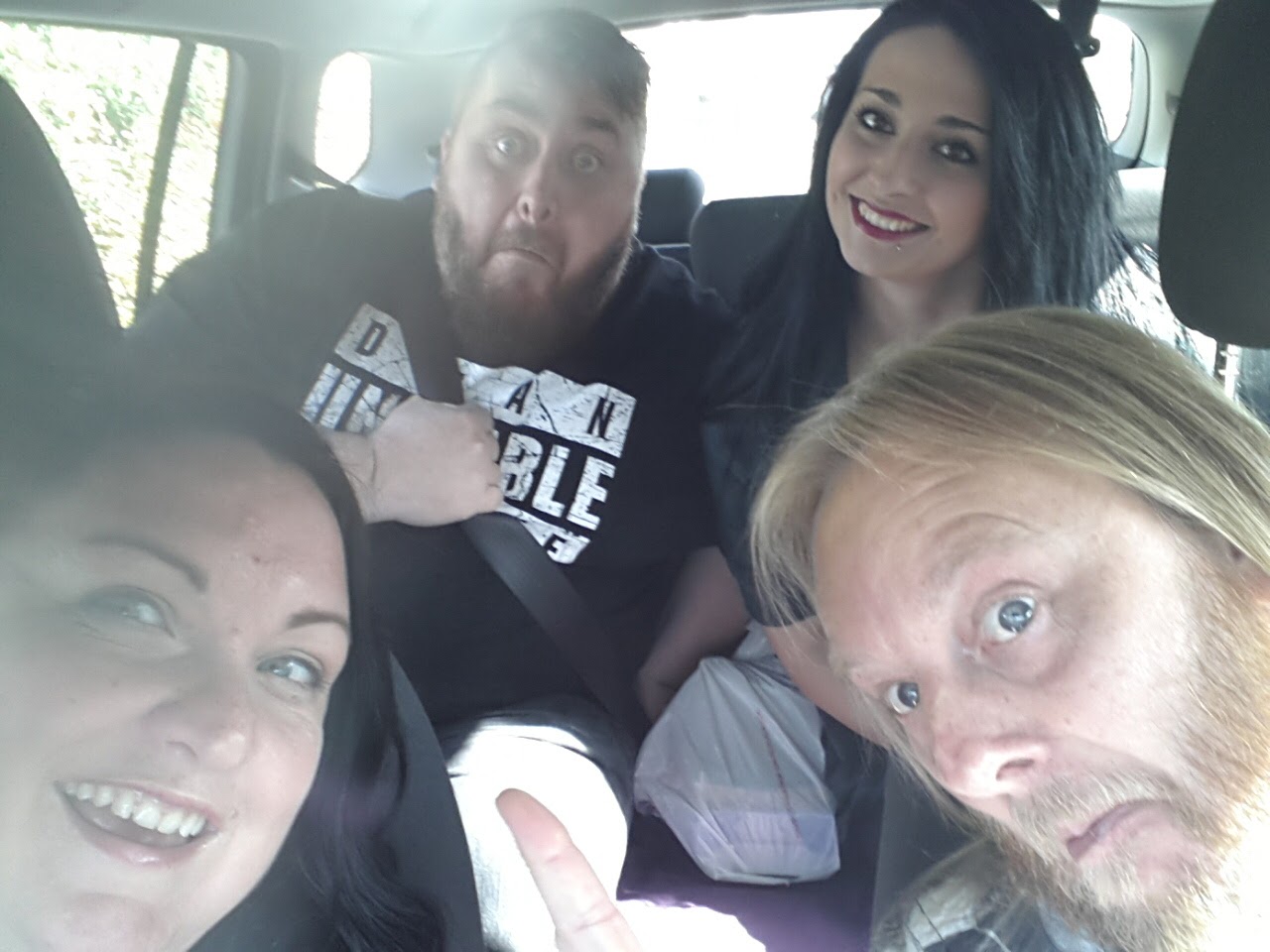 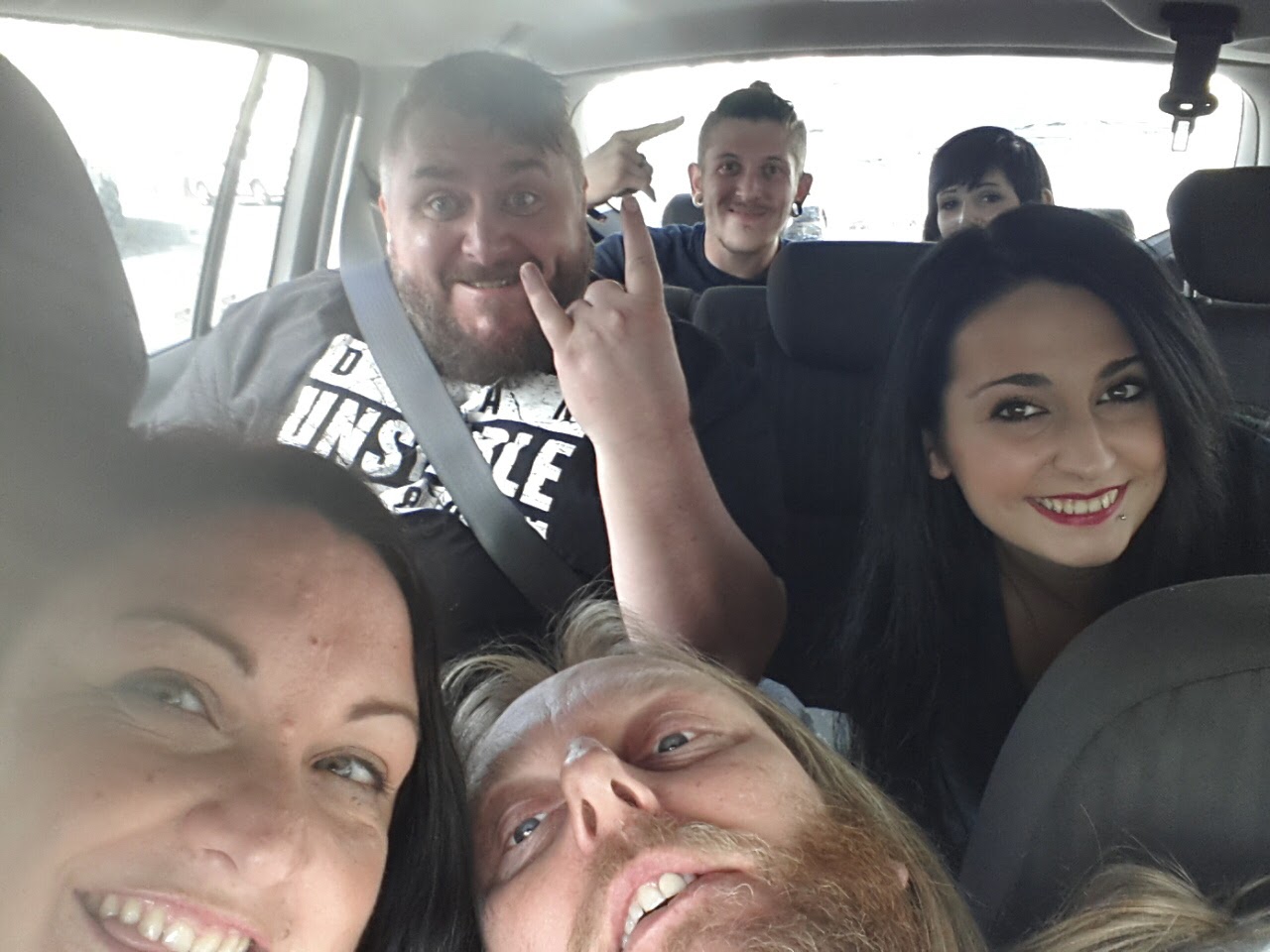 …then six…and we were good to go! 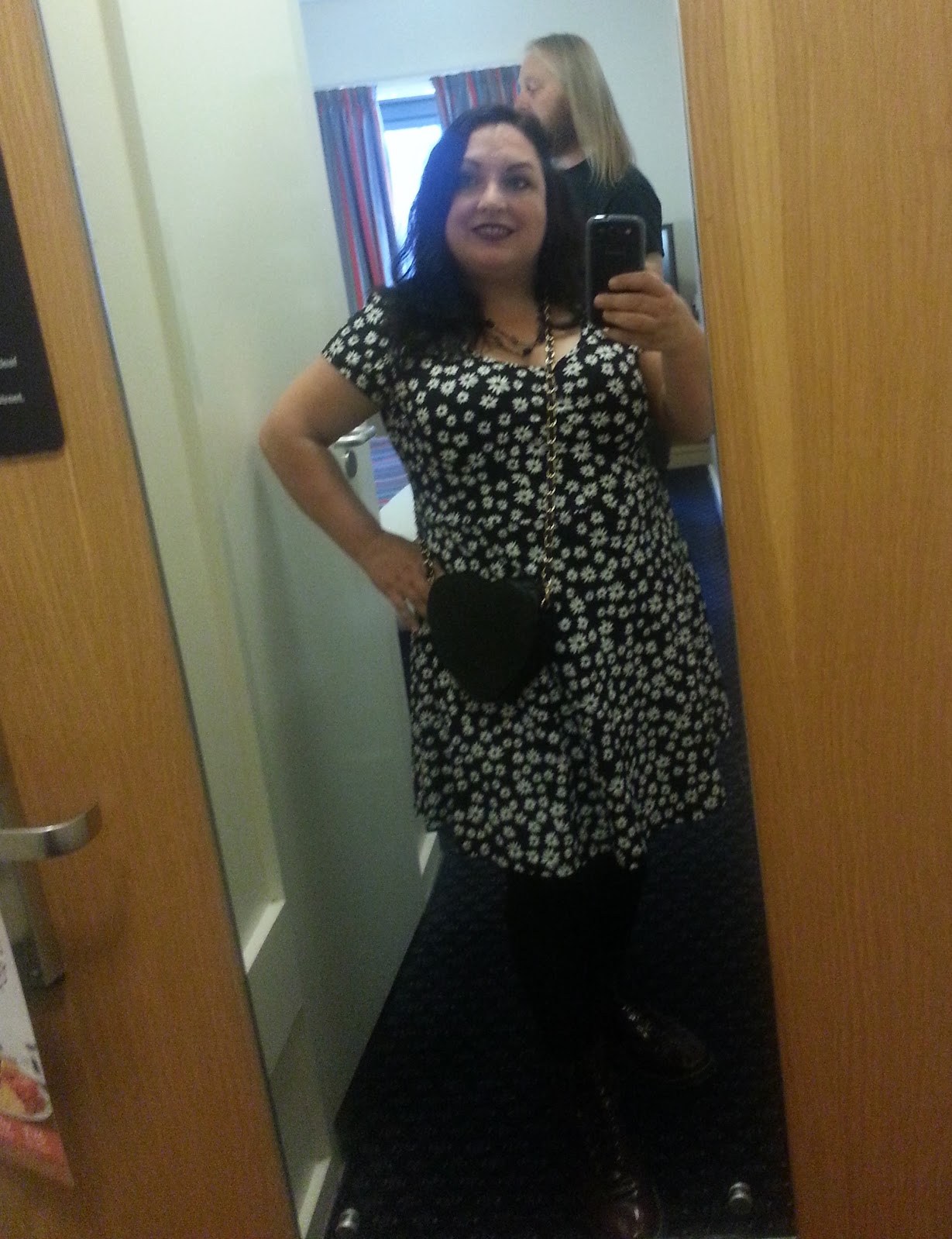 We arrived at our Travelodge in plenty of time, we even managed to have a few drinks in our room and a rest from driving before going out.  Just as it was time to leave the room, I noticed that my phone wasn’t charging.  I checked that I had actually turned the socket on (I had!) and then we realised that the electricity in our room wasn’t working, so reported it to reception.  The staff were so friendly and helpful and immediately moved us to a different room and gave us some free beer for the inconvenience.  The rooms were great and all now feature king sized beds- just what you need to stretch out on after a night of headbanging! 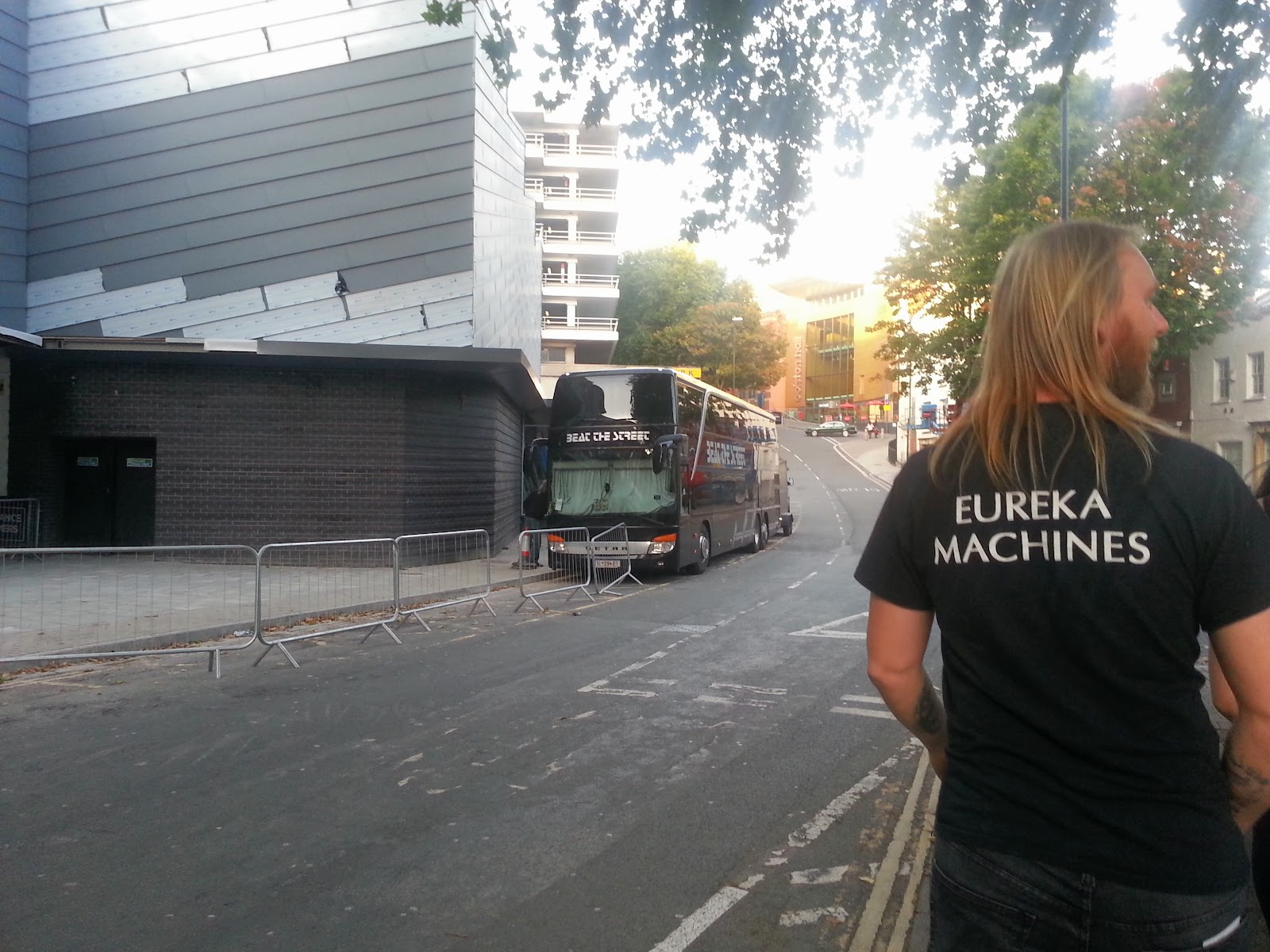 After a quick drink in the hotel bar, we were off to The Hatchet Inn for a few more.  On the way we passed the tour bus, the venue, Colonel Sanders and Wildhearts drummer, Ritch Battersby. 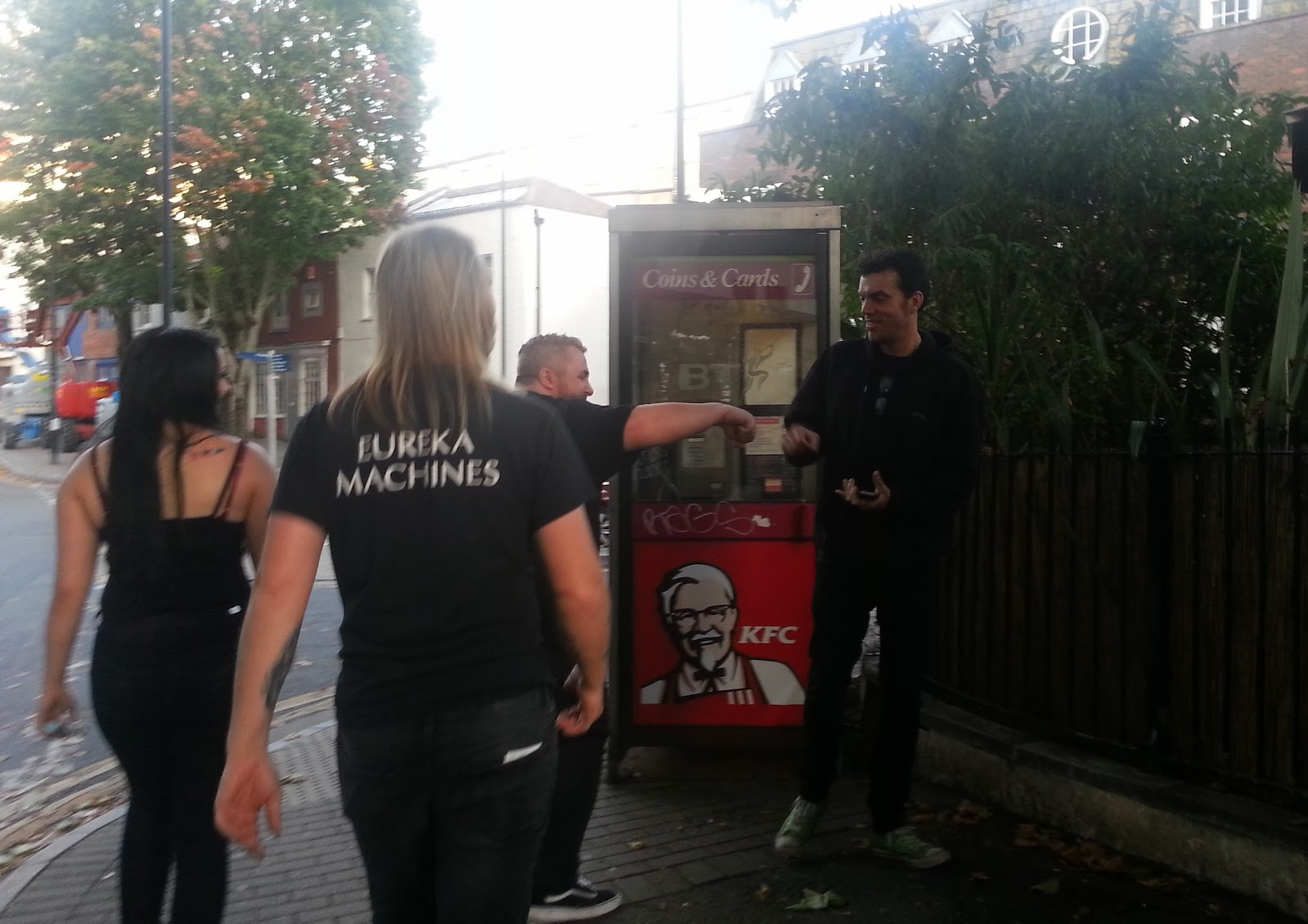 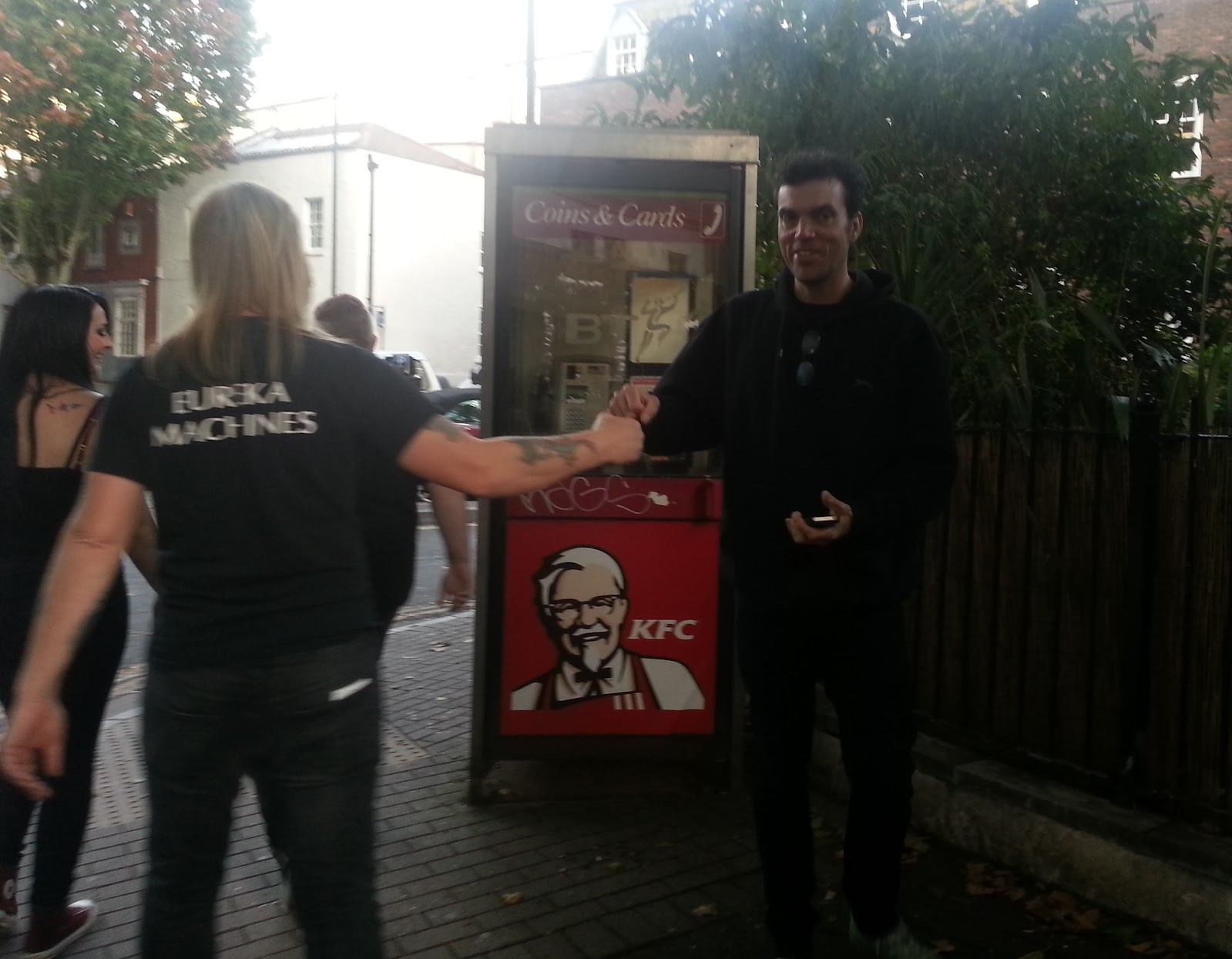 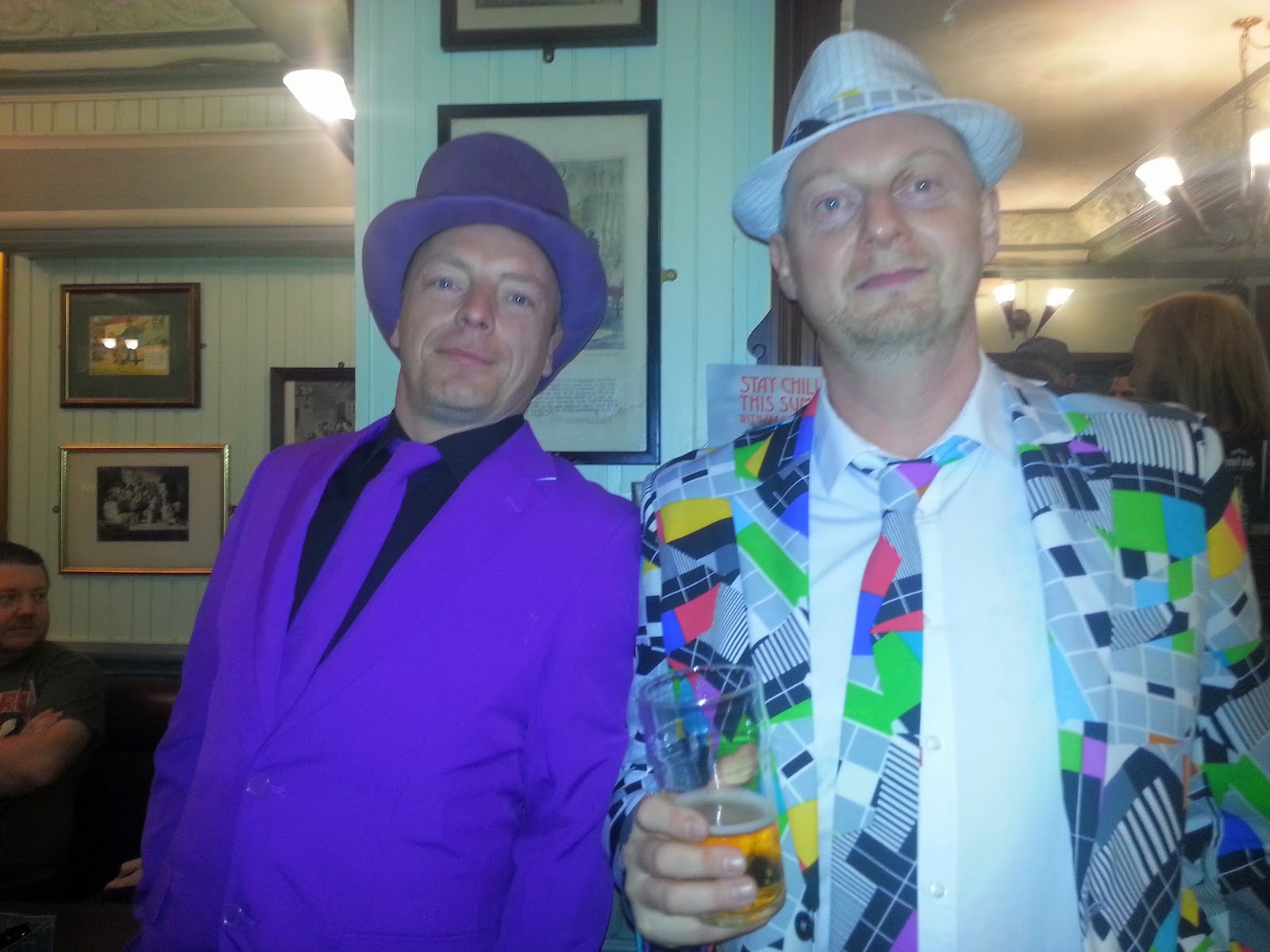 Once inside The Hatchet, we came across some very dapper looking friends from home (do not adjust your TV screen).


As we always go the Hatchet pre gigs, then we often come across people we know and also band and crew members from the gigs we’re about to see.  It’s like a “local” away from home.  There is such a good atmosphere in the place.  As well as being known as an alternative/rock pub, it’s also one of the oldest pubs in Bristol and is steeped with (some pretty dark) history. 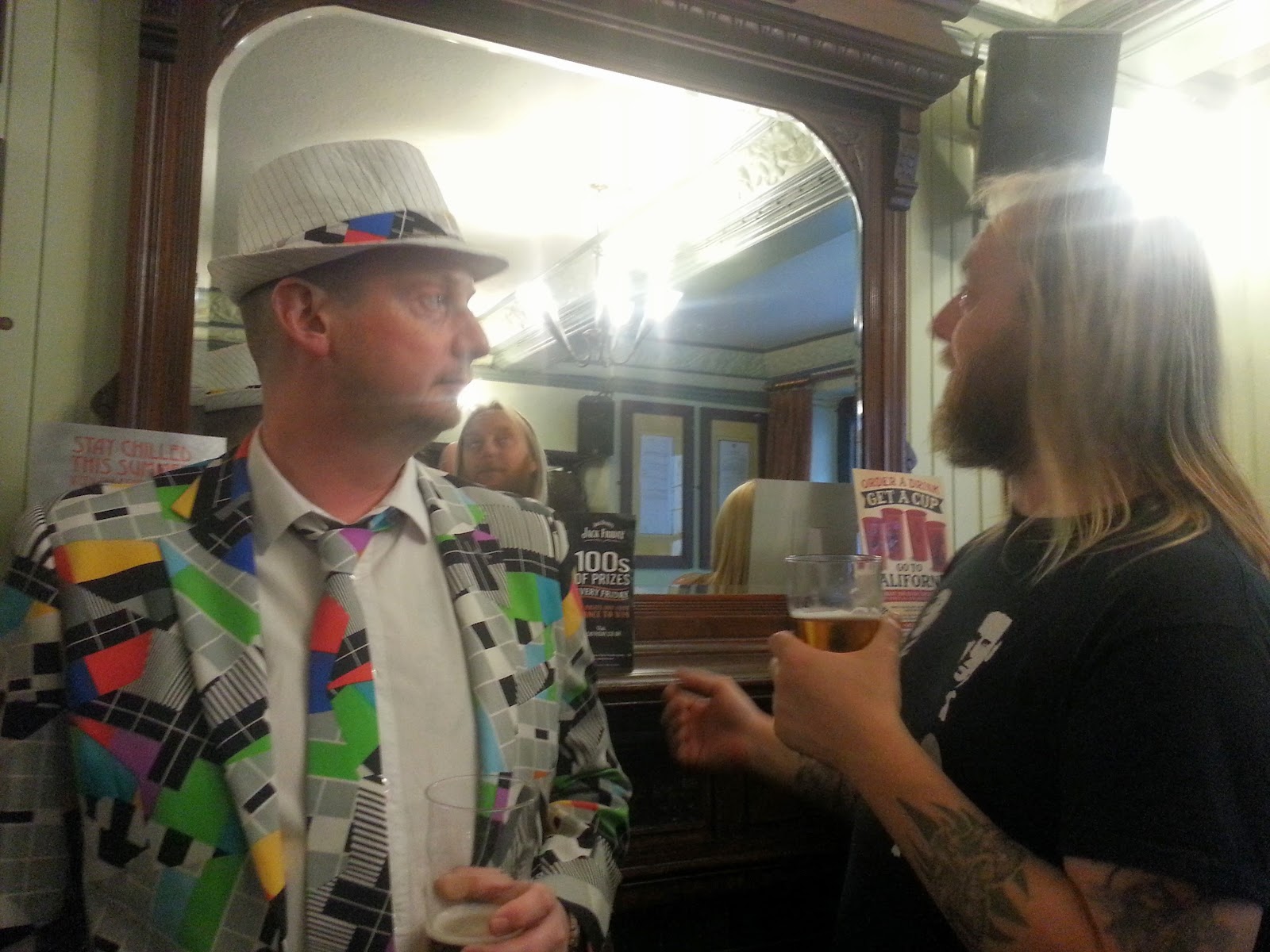 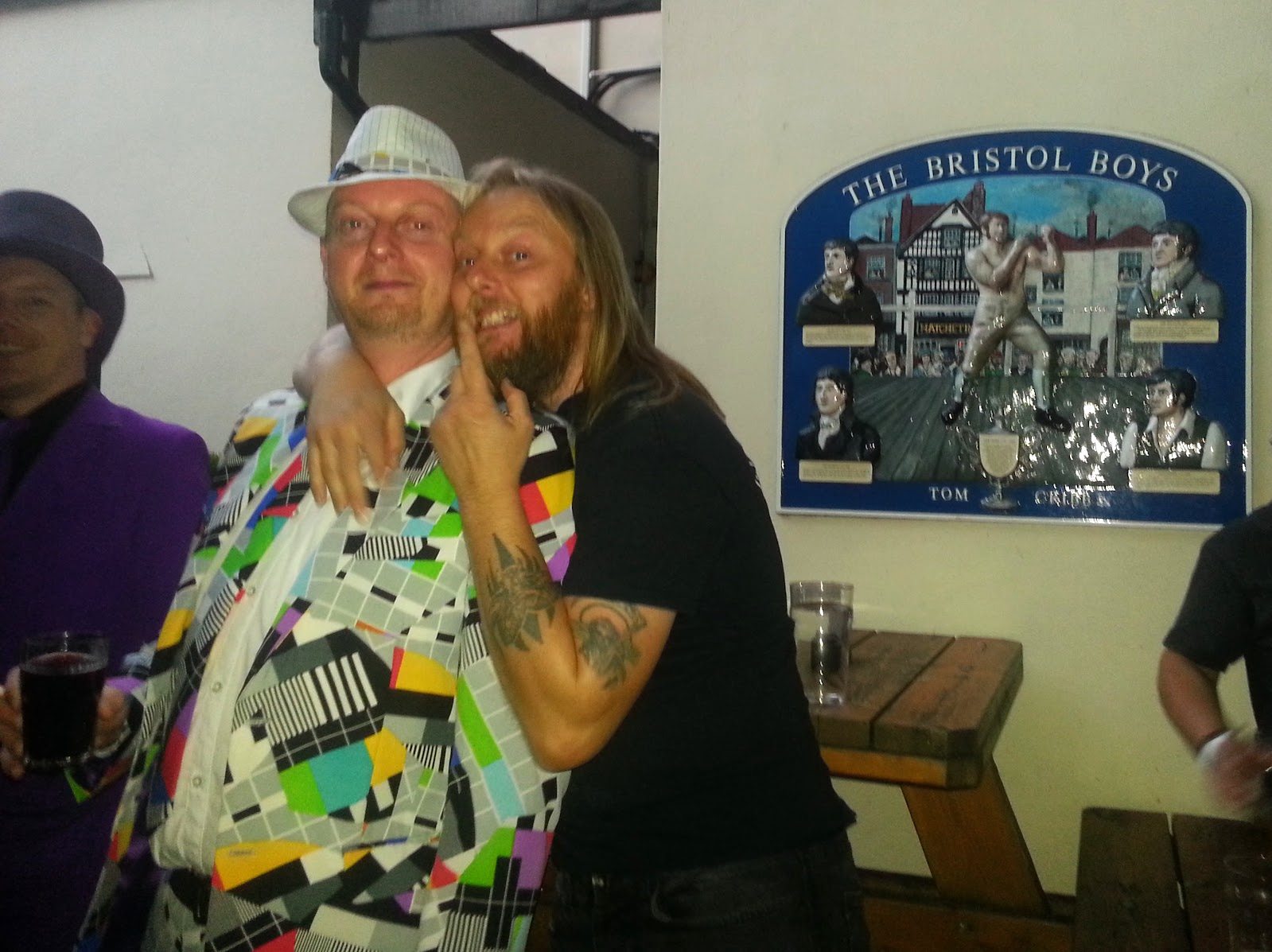 The Bristol Boys (who are not really from Bristol). 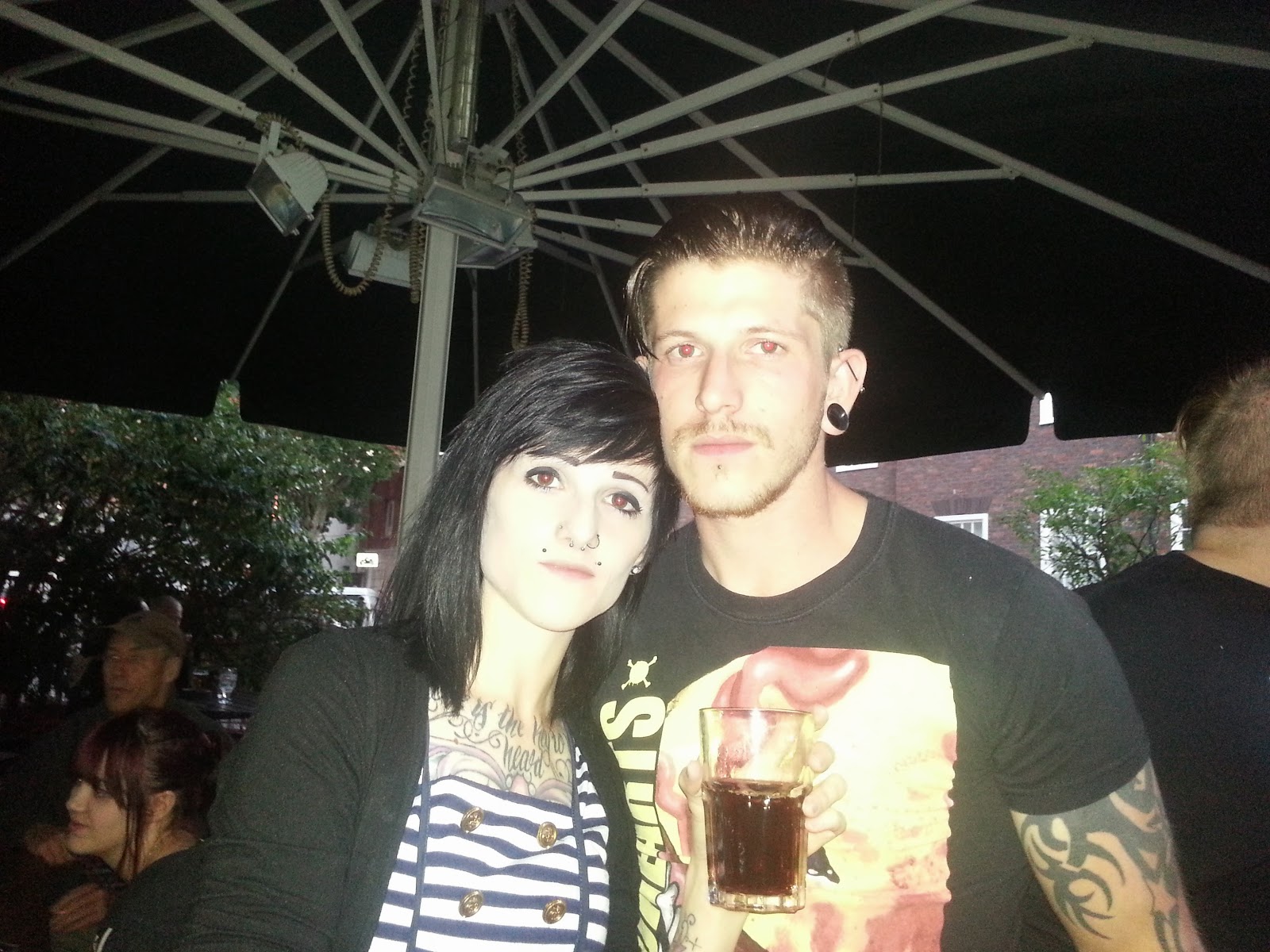 They are happy really! 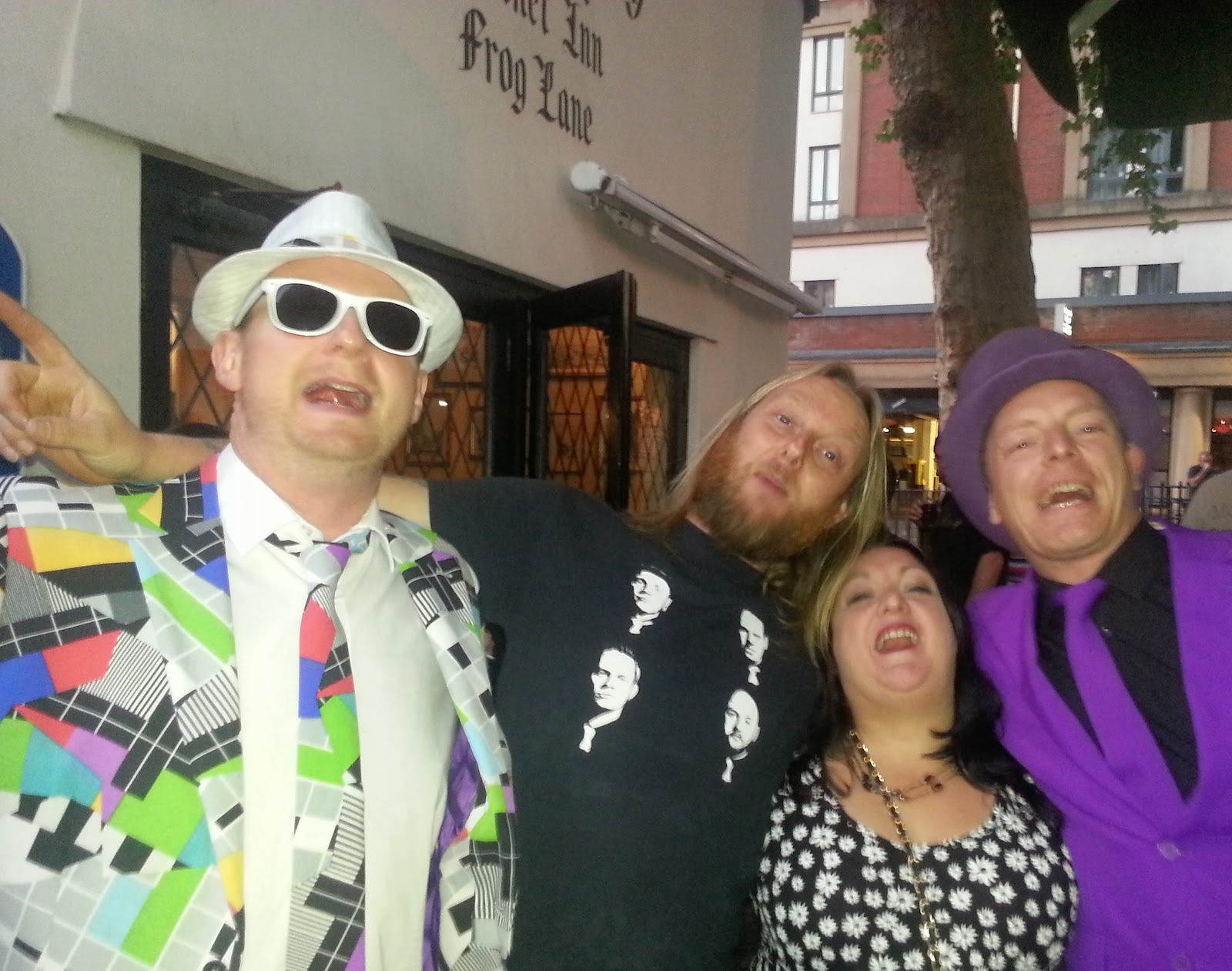 While, we were looking very merry! 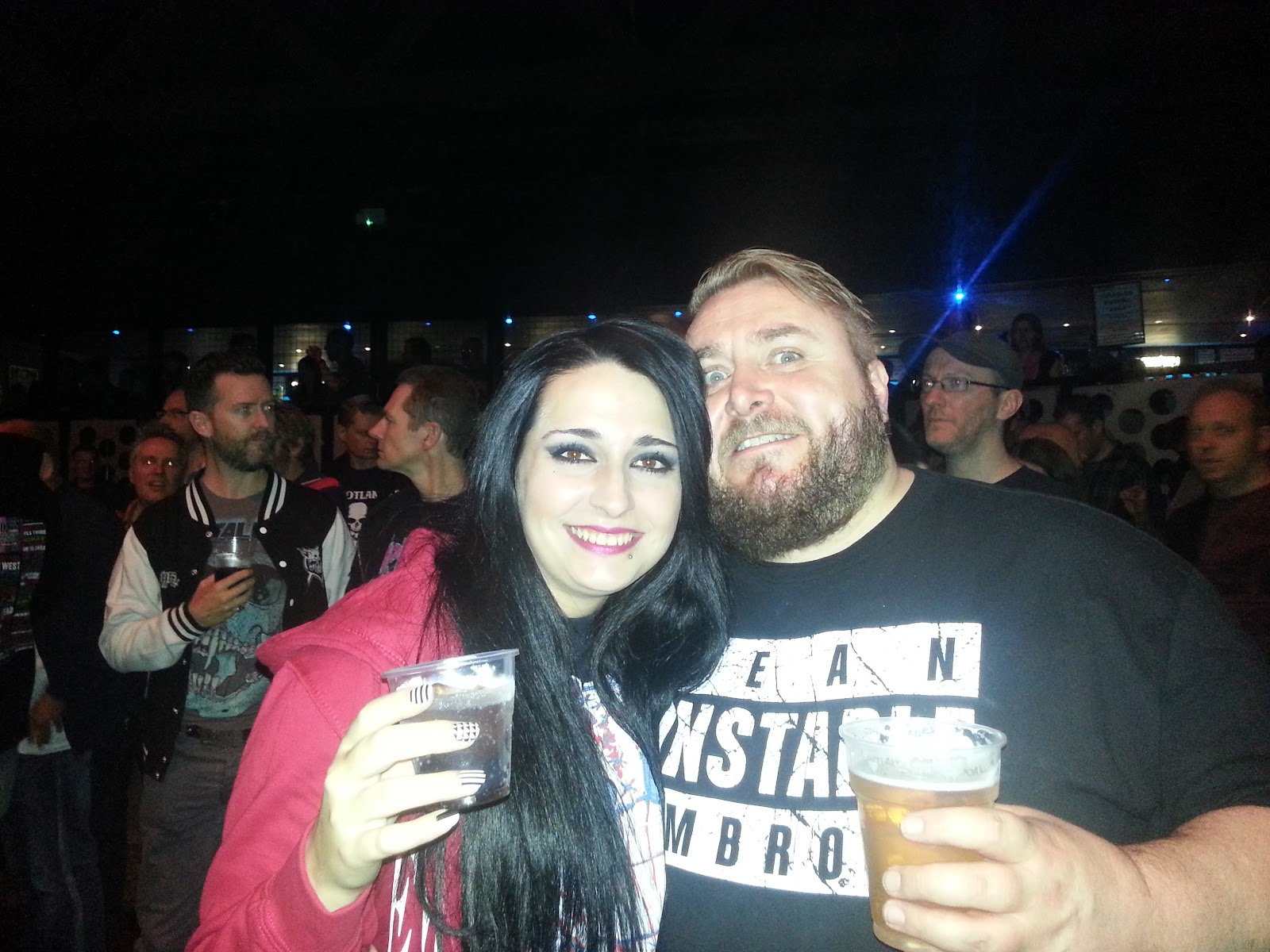 We had lots of fun (as always) in the Hatchet.  We also ran into Wildhearts bass player, Random Jon Poole, Hey!  Hello’s stand in (for the Rev) guitarist Christ Catalyst (Eureka Machines ) and Dunc the Wildheart’s Roadie having a few pre gig beers.

Then it was over to The Academy ready for the show.  We managed to get straight to the front, which is always best for me as otherwise I’m too short to see anything!

The first band, Hey!  Hello! were amazing, so fresh and energetic.  Hollis, from Love Zombies  is now their singer and although the original line up of the band sounded great, this new line up just sounds just right– as if it was always meant to be.  Ginger (Wildheart) seems to have taken a step back from being the front man of Hey! Hello! now that the powerful Hollis has stepped up to front the band along with Toshi (bass) and Ai Sugiyama (drums).  They all have a fun, high energy chemistry with each other and as long as they keep on playing, we won’t “stop loving the music!”

Next up was Baby Chaos, many fans have waited over seventeen years for this moment and were not disappointed.  They played a strong, riff filled set and we all rocked out to them, but I admit that by this point I just couldn’t wait to see The Wildhearts! 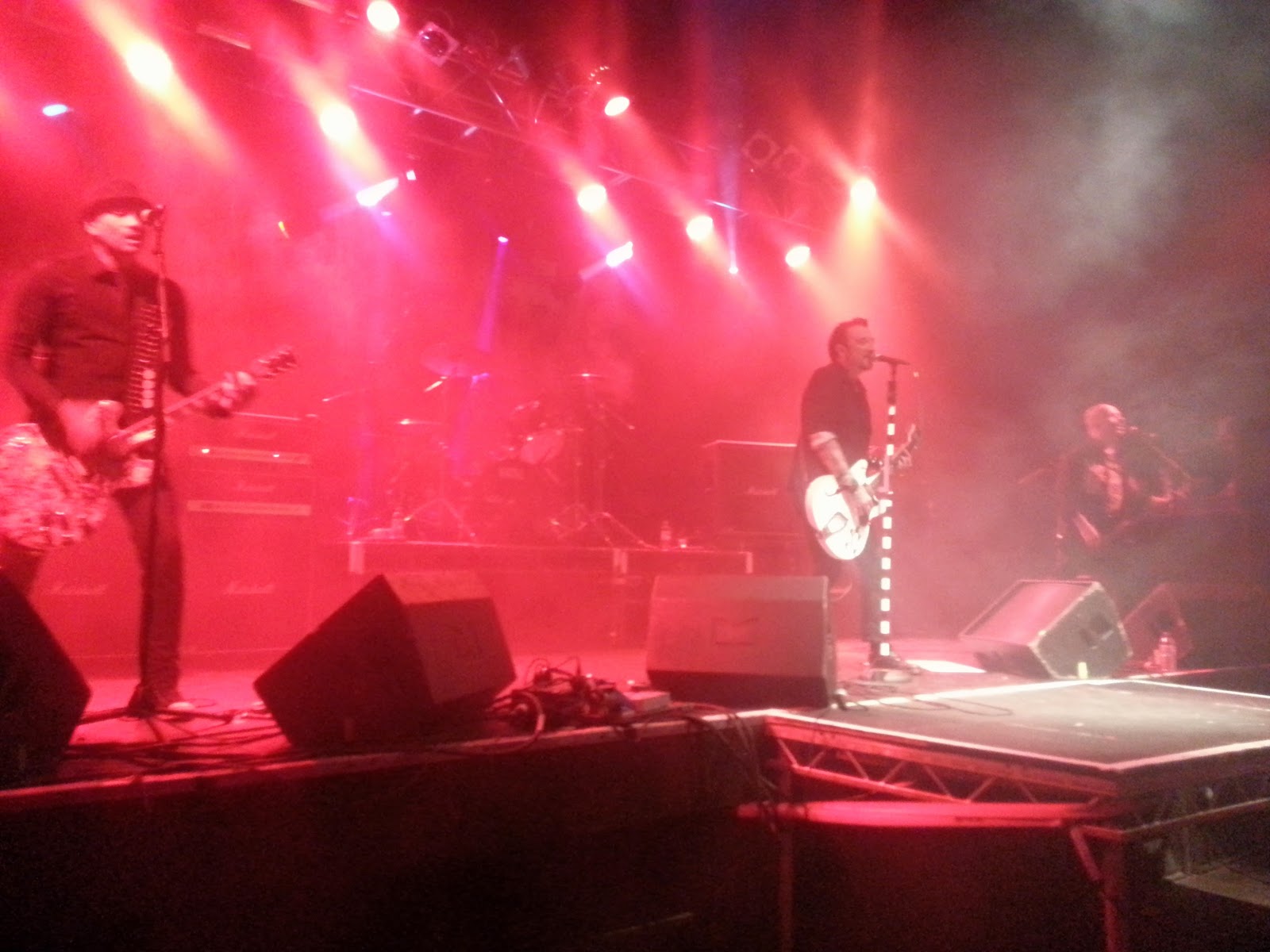 Finally it was time. 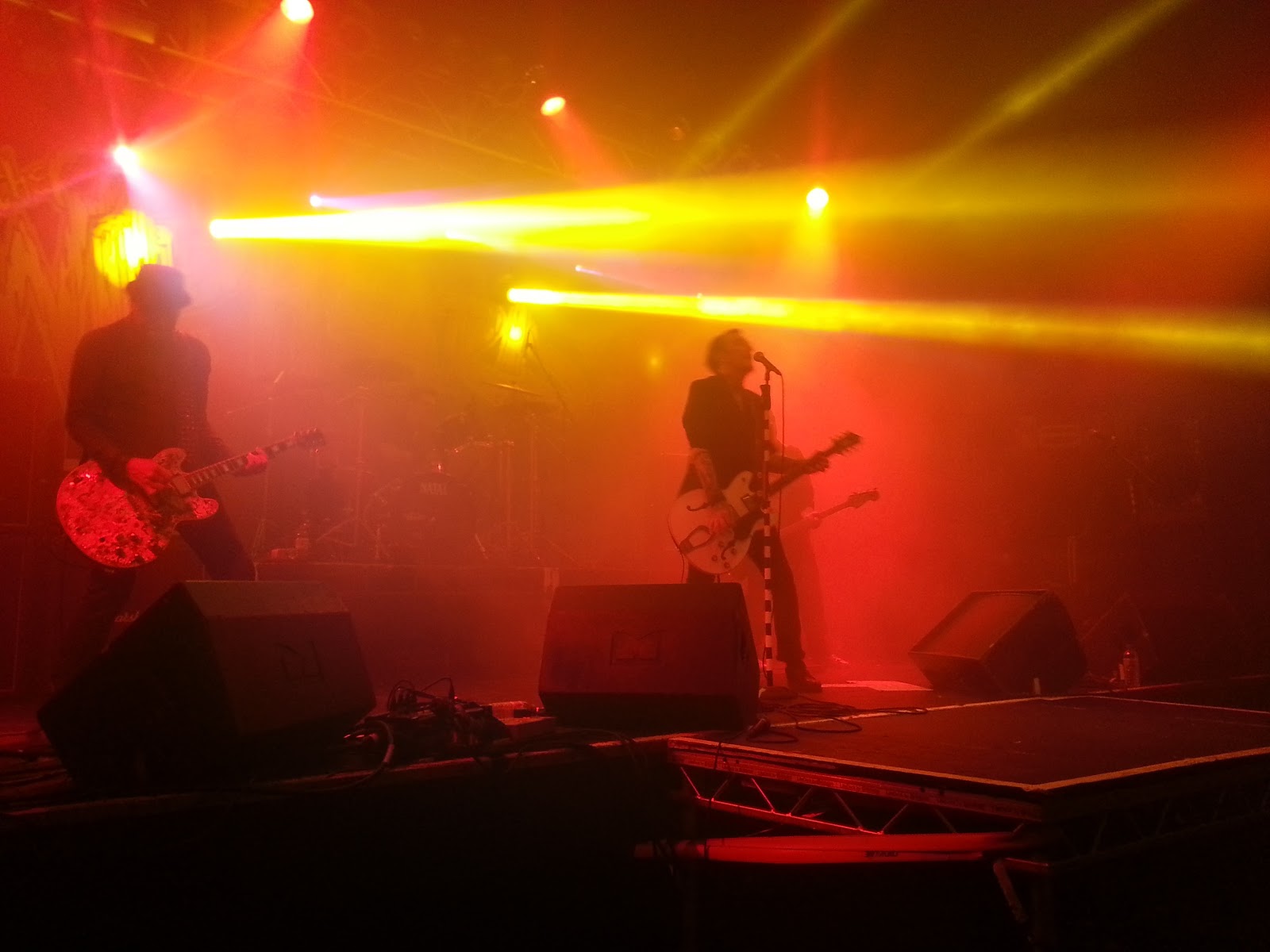 The Wildheart’s music lifts my heart every day (yes, every day.  I may have an obsession) so every time I see them live it’s just absolutely mind blowing.  During the first half, they played the 1995 album, PHUQ, we all belted out “I Wanna Go” (what an opener!), “Just in Lust”, “Jonesing for Jones” and all the top hits.  We were all transported back to 1995, as Ginger said, “back to a time when we all had hair and we were all skinny…”  Well, I still have my hair…

There was then an interval, during which, of course we all sang the infamous, “Don’t worry about me…”.  You can’t beat a drunken crowd sing song…

Then they were back playing popular songs from other albums.  I had a few songs that I really hoped they would play, but I didn’t get my hopes up, as there’s never enough time for a band with such a huge back catalogue to play every song that the fans would like to hear.  But it made my day when Headfuck did get played.


As CJ said years ago in a Team Rock interview:

“It’s just rock’n’roll, innit?  Headfuck has always been everyone’s favourite. It’s the chord progression, but it’s the sentiment as well. Everyone’s had a partner who fucked with their head.”

Like all the best Wildheart songs, it also has a few mondegreens.  Mike Muir, from Suicidal Tendencies, once asked the Wildhearts to play “the song about a cow” as he had misheard the lyrics to be “My baby is a heiffer!”

No-one wanted the Wildhearts set to end, but it did, it had to.  Apparently, they really are just mortal folk who need to eat, drink and rest just like the rest of us, who knew?

I really can’t wait until the next Wildhearts gig I can make though!

As we made our way out, we spotted Hollis. I went up to tell her how much I love “Love Zombies” (so much so that I will even repeat a word in a sentence for them) and how great they played at Camden, then we quickly had a photo and Toshi and Ai Sugiyama jumped in too which was pretty cool.  Yes it was a total fan girl moment and as I was excitedly talking I realised that I sounded like a total stalker (eek).  I apologised for this “post gig high”  induced crazed behaviour but Hollis had the grace to proclaim that Love Zombies actually need a few stalkers* like me, so it’s all good, phew! 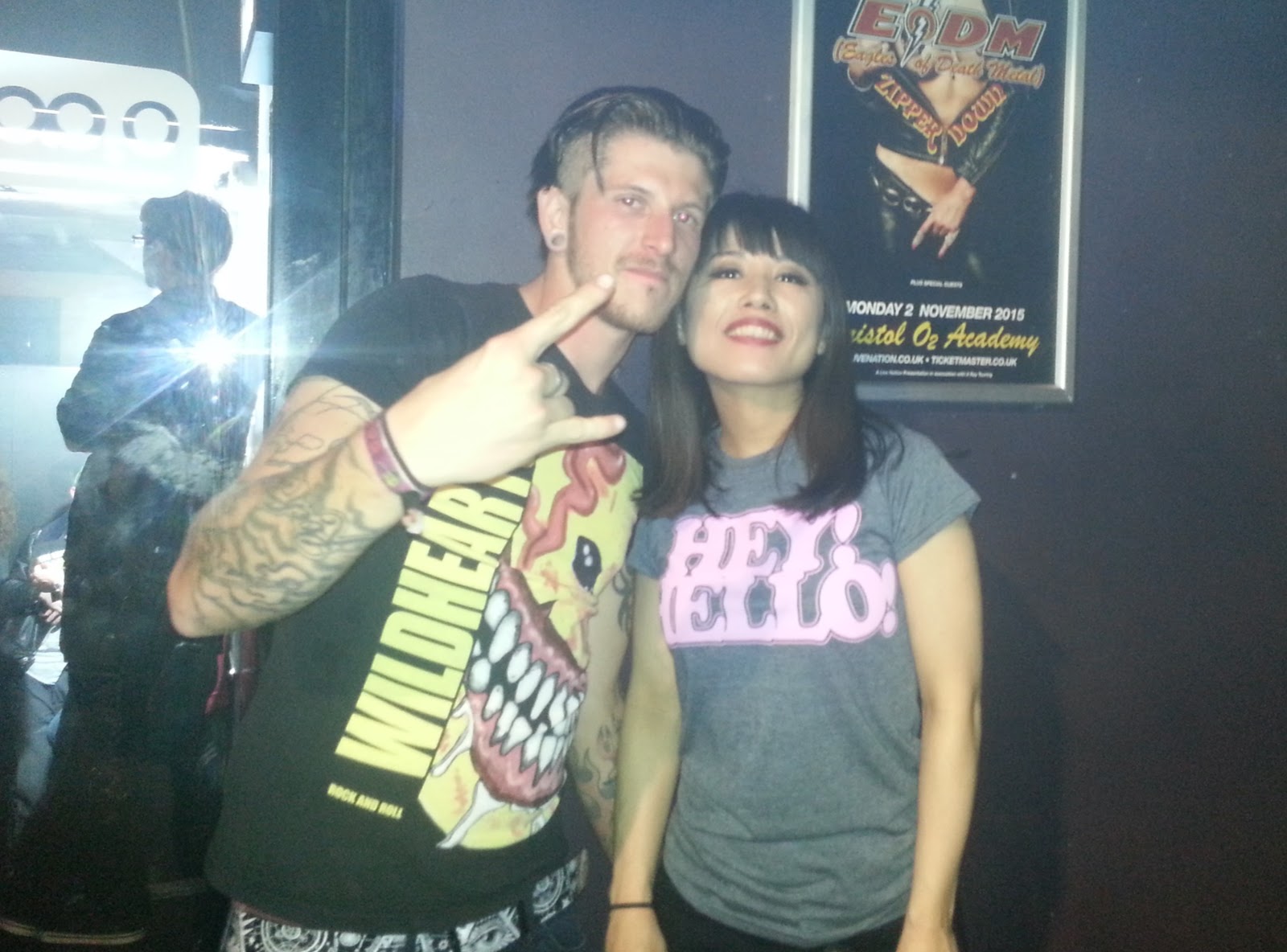 Drummers united!  Tommy even showed her his Trunk Shot tattoos. 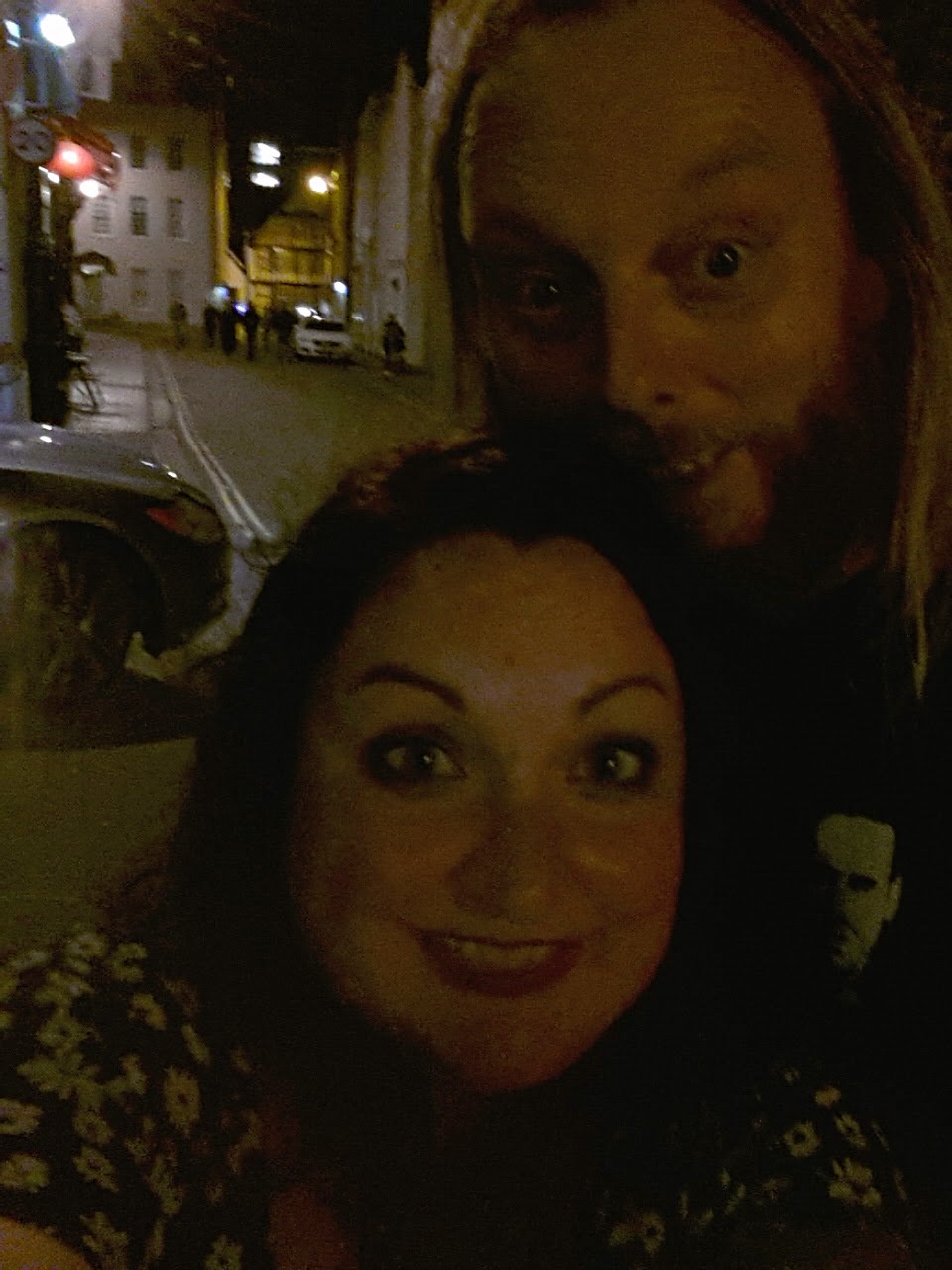 We then had the post drinking munchies so went in search of food. 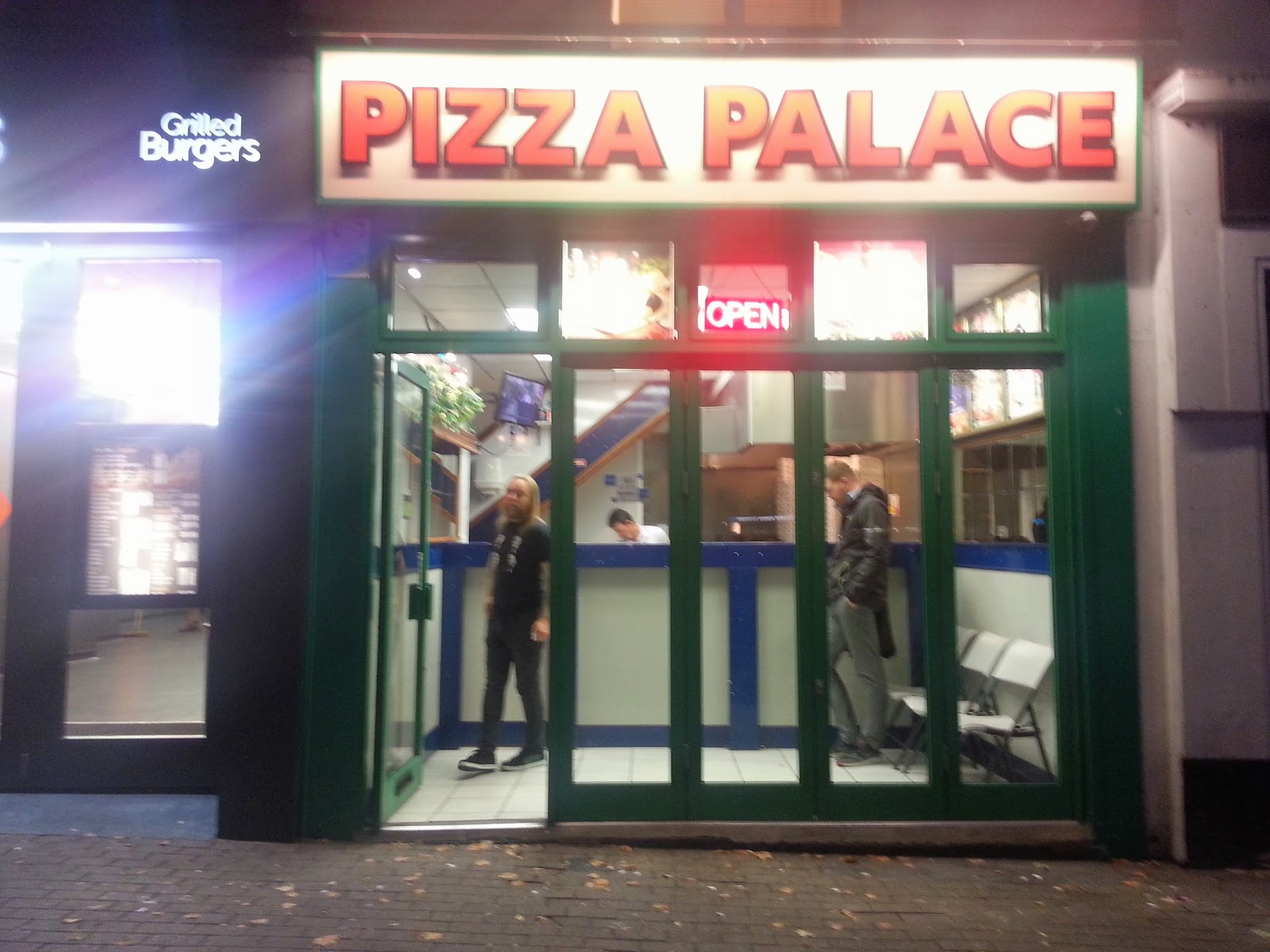 Oh yes, it was pizza time!  Then back to the hotel.  Once back, I was relieved to now have electricity and be able to charge my phone.  However, we soon realised that on moving rooms, we had left the charger in our first hotel room.  Oops.  So, in the very early hours of the morning, the staff had to help us get into our old room to get our charger.  Their help was much appreciated and made our stay.


The next morning, we enjoyed a cooked, buffet breakfast- they do veggy sausages which is always a bonus!


It was such a great night.  A real buzz.  I had so much fun with the Trunkshot boys, Tamsin and Rhi.  We are all looking forward to the next one.  But until then,

Read more about this gig and our weekend on Tamsin’s blog:  Chasing Esme!