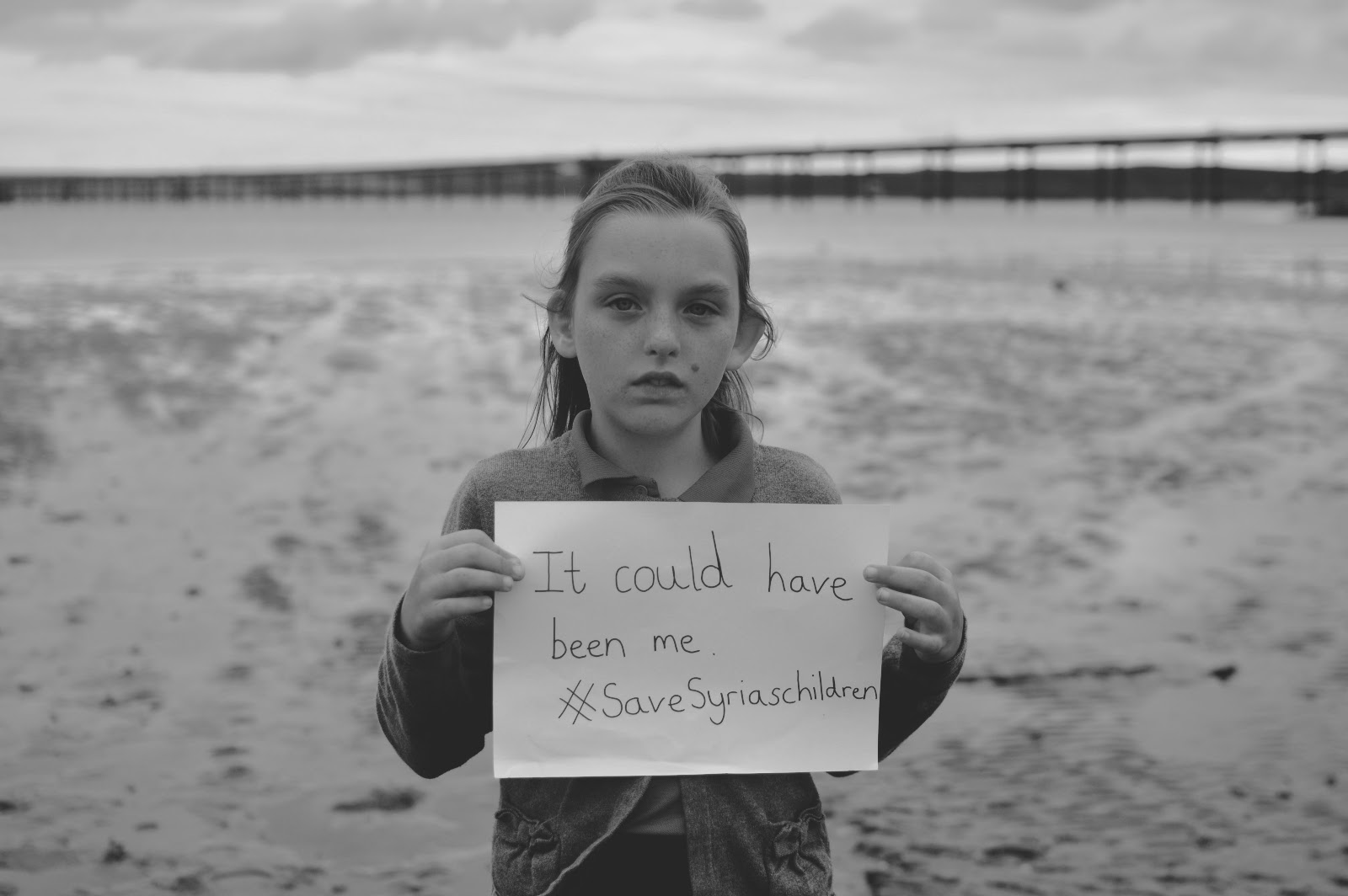 After publishing this post yesterday (scroll down to read), I joined up with fellow bloggerswho also wanted tohelpthe childrenand adults in Syria, by raising more awareness, donations and money to those in need. 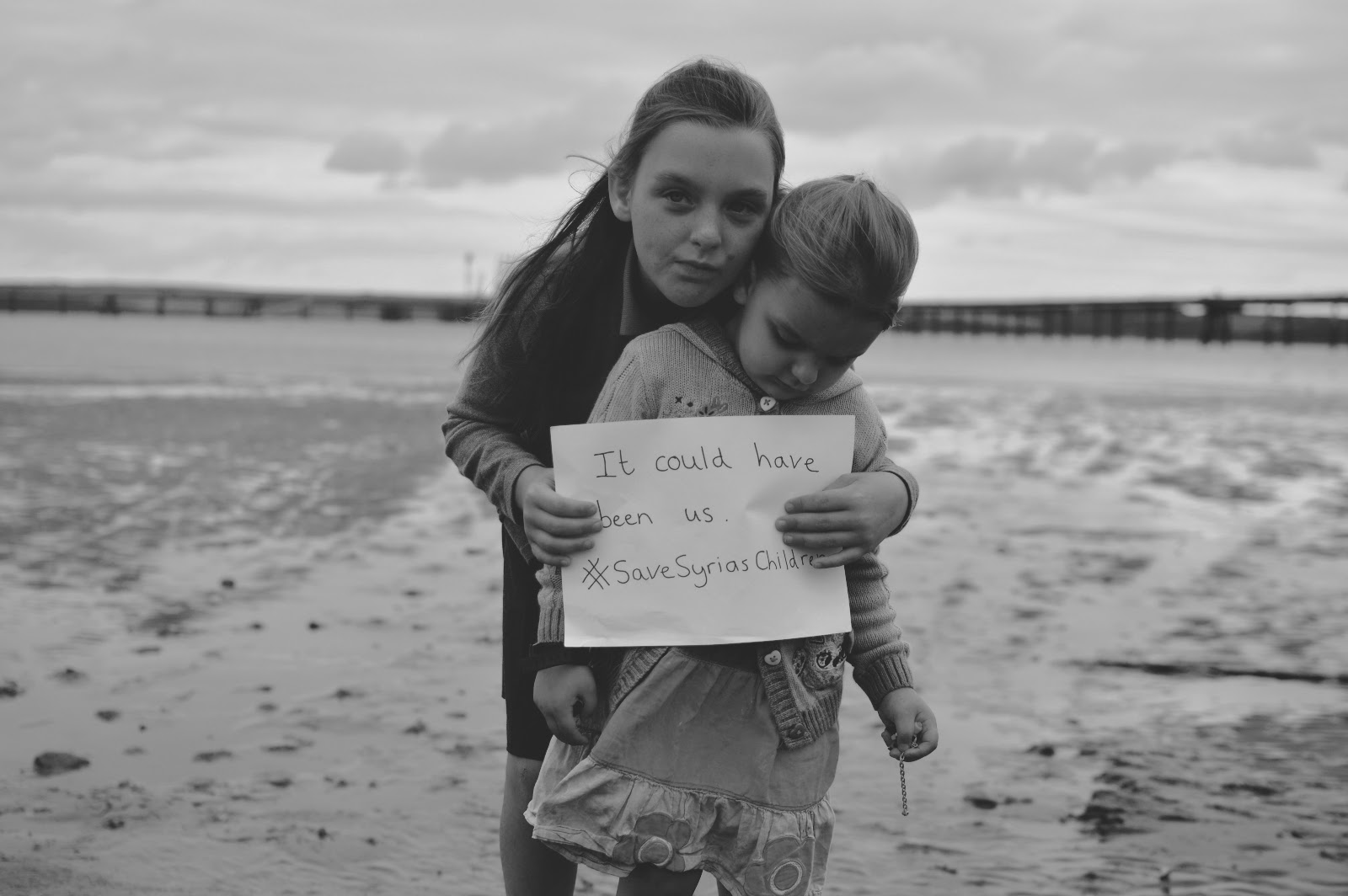 Together, we have created this video, which brings home to everyone, that this situation could be happening to any of us.  If I had been born elsewhere, it could have been me.

There’s lots that you could do from the comfort of your own home.

Do Something to help.

Whatever you decide, don’t choose apathy. 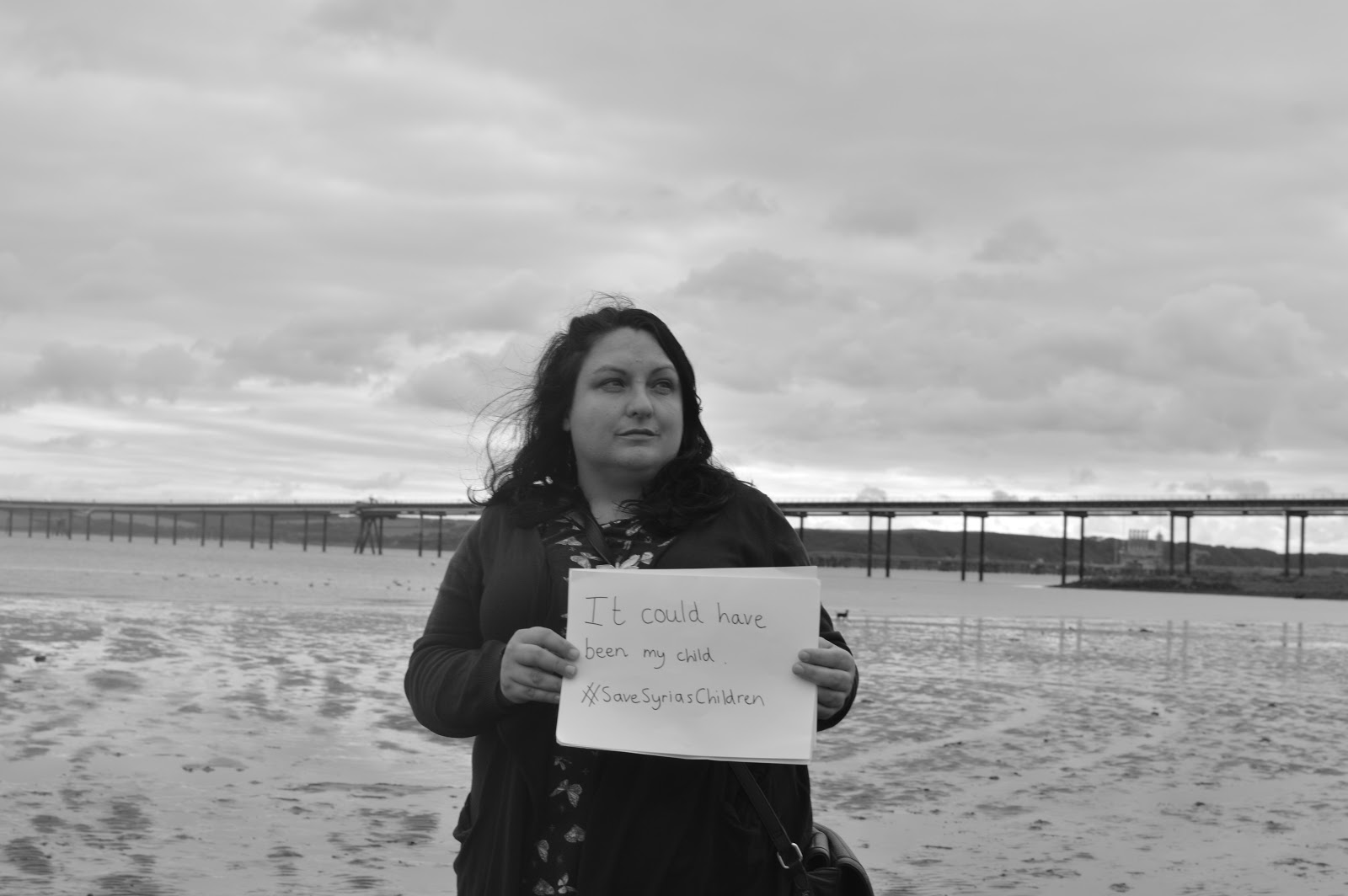 On Wednesday, many children returned to school after the long summer holidays.  My social media timelines were full to the brim with the familiar photos of children in uniform, standing in front of doors and fireplaces, reaching another milestone in their lives.

I loved seeing these photos.  My friends and family mean a lot to me, so seeing their joy and pride in their children makes me happy too.

There was also a different photo being shared time and time again. This photo did not bring joy.  This photo brought disbelief, incredible sadness and despair.

That was the photo of three year old, Aylan Kurdi, the little Syrian boy (a brother and a son), who was washed up on a Turkish beach, trying to (eventually) reach Canada with his family.  His thirty five year old mother and five year old brother, Galip, also sadly did not make it.

Aylan’s  father, Abdullah Kurdi , has said, “My children were the most beautiful children in the world. Is there anybody in the world for whom their child is not the most precious thing?
My kids were amazing. They woke me every day to play with me. What is more beautiful than this? Everything is gone.”

He now wants to bring them back to be buried in their hometown and stay with them forever.

As well as my sorrow for this family, I was also disappointed to see many people questioning whether the photo of Aylan, should have been shown at all.  I worried that this was going to become the focus of the news story instead of discussing what could be done to help other people and families in this position right now and also to prevent this happening in the future.

David Cameron was at first adamant that the United Kingdom were not going to welcome any more refugees and the future looked bleak.

However, the photo of Aylan also brought hope.  Yes, tragically, this hope was too late for him and his family.  But many people, after seeing the human side of the refugee’s plight felt compelled to help.

Worldwide, politicians gave persuasive speeches, petitions were launched and marches organised.  But on a smaller scale, just within our own friendship groups, changes were happening too.

Fellow school mums donated money to Save the Children and encouraged others to do the same, writers and bloggers, such as Fiona from Watching You Grow,  wrote the words that described exactly how many of us were feeling Wednesday night, business owners, such as Tigerlillyquinn Shop declared that all of their profits this September will go to Syrian Refuge Crisis and  a school friend announced that she is off to Calais next week to drop off supplies and volunteer where she is most needed.  My friends make me proud and inspire me to do more too.

I have been reading articles about practical ways to help the Syrian Refugees.  I have donated money and will again.  I have signed petitions to encourage Britain to accept a fair number of refugees seeking safety in Europe.  I have arranged to attend  the Solidarity with Refugees March in Cardiff on September 12th (there is also one taking place at Westminster).  I am going to send off letters and e-mails to the relevant politicans and my local MP.  I am taking part in the #refugeeswelcome Twitter Campaign.  I am currently looking for the closest drop off point for me to donate supplies to be taken to refugees.  If anyone knows of one in South West Wales please let me know.  Otherwise an Amazon wish list has been set up for people to buy specific items such as shoes and sleeping bags to be delivered to Calais as part of the appeal #KentforCalais and #HelpCalais. The truck leaves on 17th September.

(Edited to add: As soon as this post was published, another friend Kat told me of a collection in my town, organised by the Church of Nantucket.  They will then transport the supplies to the Cardiff Collection for Refugees, so I can drop my donations in next week.  There is amazing work going on in every town in the UK.  I have also seen “(Our Town) Welcomes Refugees” Campaigns, where each town has pledged to take a certain number of refugees.)

The same people who asked for Aylan’s photo to not be shared as “it upset them”, also argued that it was not respectful and his parents would not like it.  Abdullah Kurdi himself has said that he is happy for the “World’s Attention” to be on them “so that they can prevent the same from happening to others. Let this be the last.” I hope his mother would feel this was a fitting tribute and legacy to her beautiful baby boy too.

There are others that argue that there are more problems in the World than this and seem to think that because we can’t solve them all, then we should not try to solve any.  I can never understand that attitude.

Yesterday, it was reported that David Cameron is set to announce that Britain will take in thousands of new Syrian refugees.  It’s a start.

My own children went back to school yesterday.  I didn’t manage a “group sibling back to school” photo of them all as they all went off to school different times and my own three year old, only goes back to nursery next week.  I just managed a quick phone pic of Rebecca on her way.

But more importantly than that, I have them.  I have my children.  I held them all for longer in our bedtime cuddles last night and instead of feeling sad at them going back to school, I felt relieved that I was only sending them off to school, which to them is a fun, happy, safe place that they were excited to go back to.  We are so lucky.  I got to pick up three happy children at the end of the school day.

I can’t imagine what it was like for the refugees on the sunken boats so far and I hope no one has to go through that again.  Up to now four million Syrians have been forced to leave the country since the war began.  More than 2600 immigrants have died in the Mediterranean sea trying to reach Greece or Italy.

The UK has only accepted 200 Syrian refugees.

Aylan’s photo is thought to have been a turning point in the refugee crisis. I think for a lot of us, the problem so far has been too big to understand and to help on our own.  But now so many of us are united, it seems possible to make a difference at least.

A three year old Syrian boy has managed to turn despair into hope. 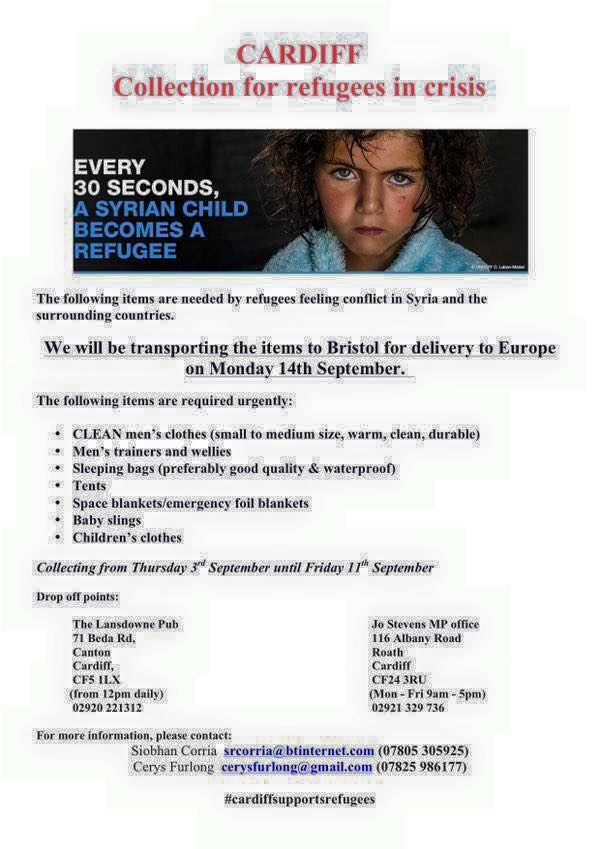 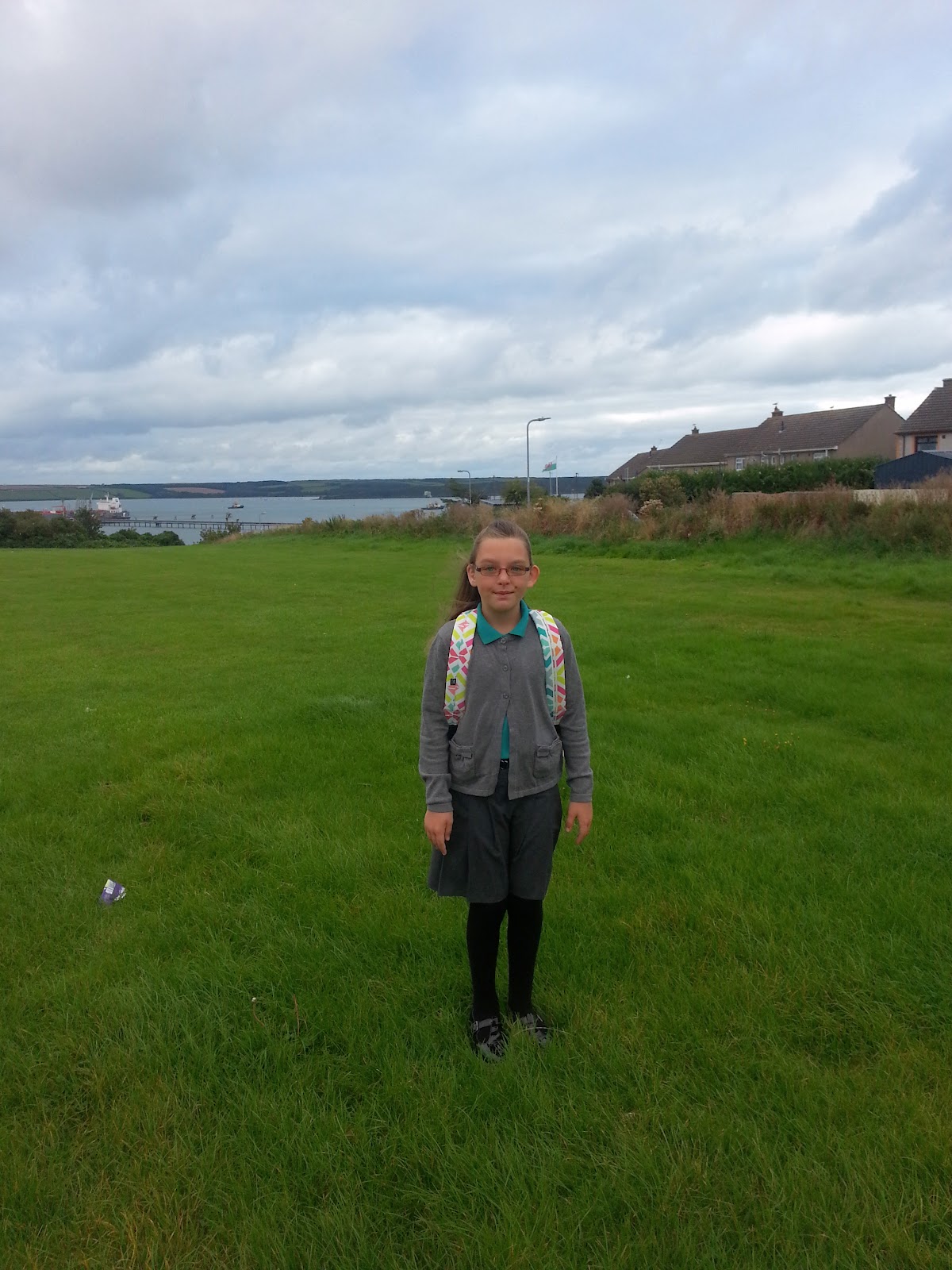