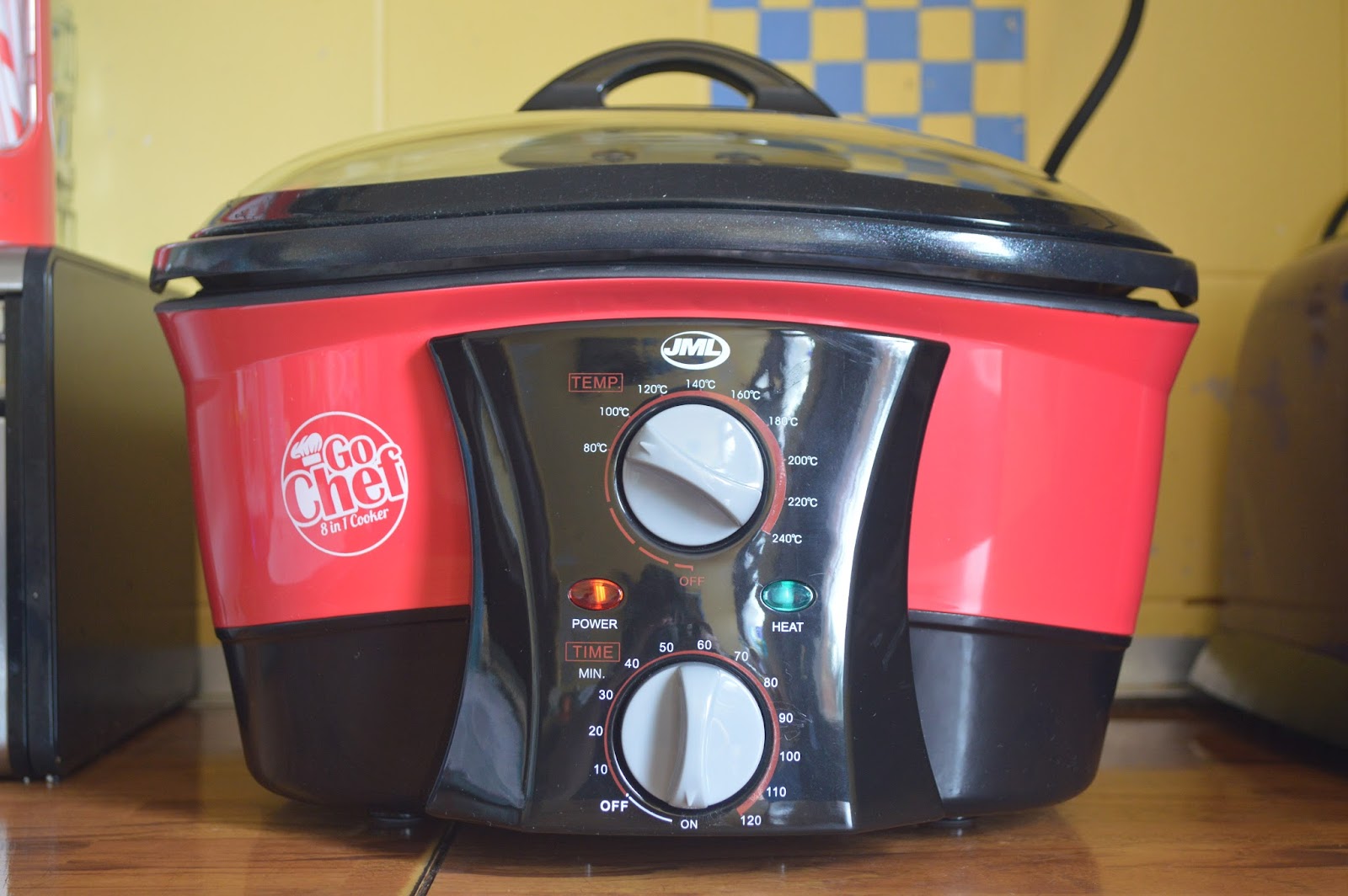 When we were first sent the JML Go Chef 8 in 1 Cooker to review, my first thought was where would it fit?  We don’t have a lot of surface space in our kitchen and the box it arrived in seemed huge.

However, once I actually took the time to clear a space in the kitchen it didn’t take up as much room as I thought, so that was a relief.  I also liked the red design.   I gave the bowl and accessories a wash, rinse and dry.  Next I needed to decide what recipe to try first in it. 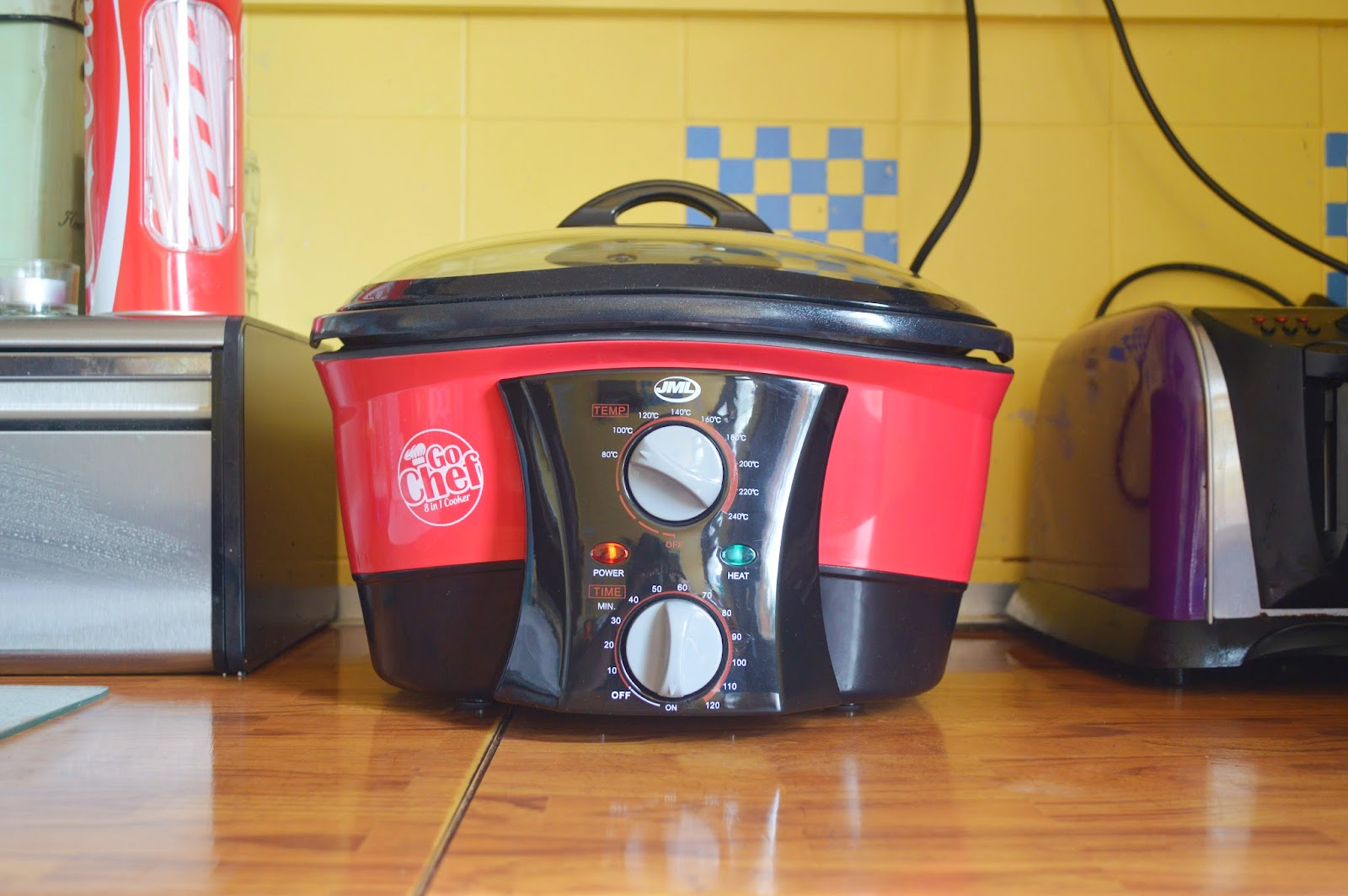 With the Go Chef being an 8 in 1 cooker, I was spoilt for choice for recipes to try.  I decided to cook a simple stew for my first attempt. 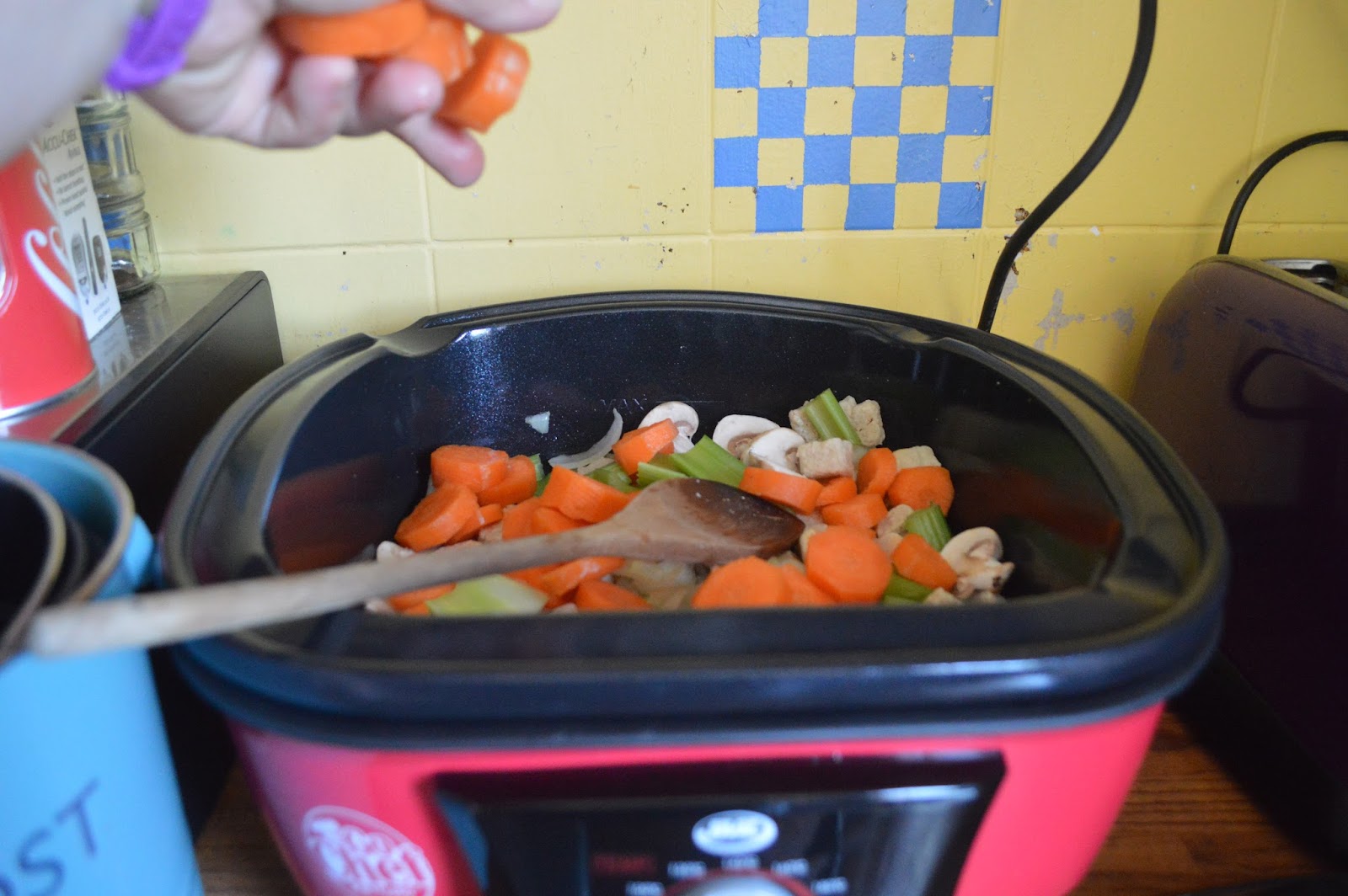 Of course, I can make a stew on the hob too, but this needs stirring, or it will stick and as we cook with gas, I couldn’t just leave it.  The beauty of the JML Go Chef is you can use it as a slow cooker so I could get on with my work while our meal cooked.

Another advantage I found was having the Go Chef on the kitchen surface in front of me meant it was very easy on my back to make the meal in one place and at one level.  I could chop the veg and put it straight into the Go Chef.  Of course, some people already have well designed kitchens with a food preparation surface next to their cooker already, but ours is opposite so there is usually a lot of to and fro-ing. 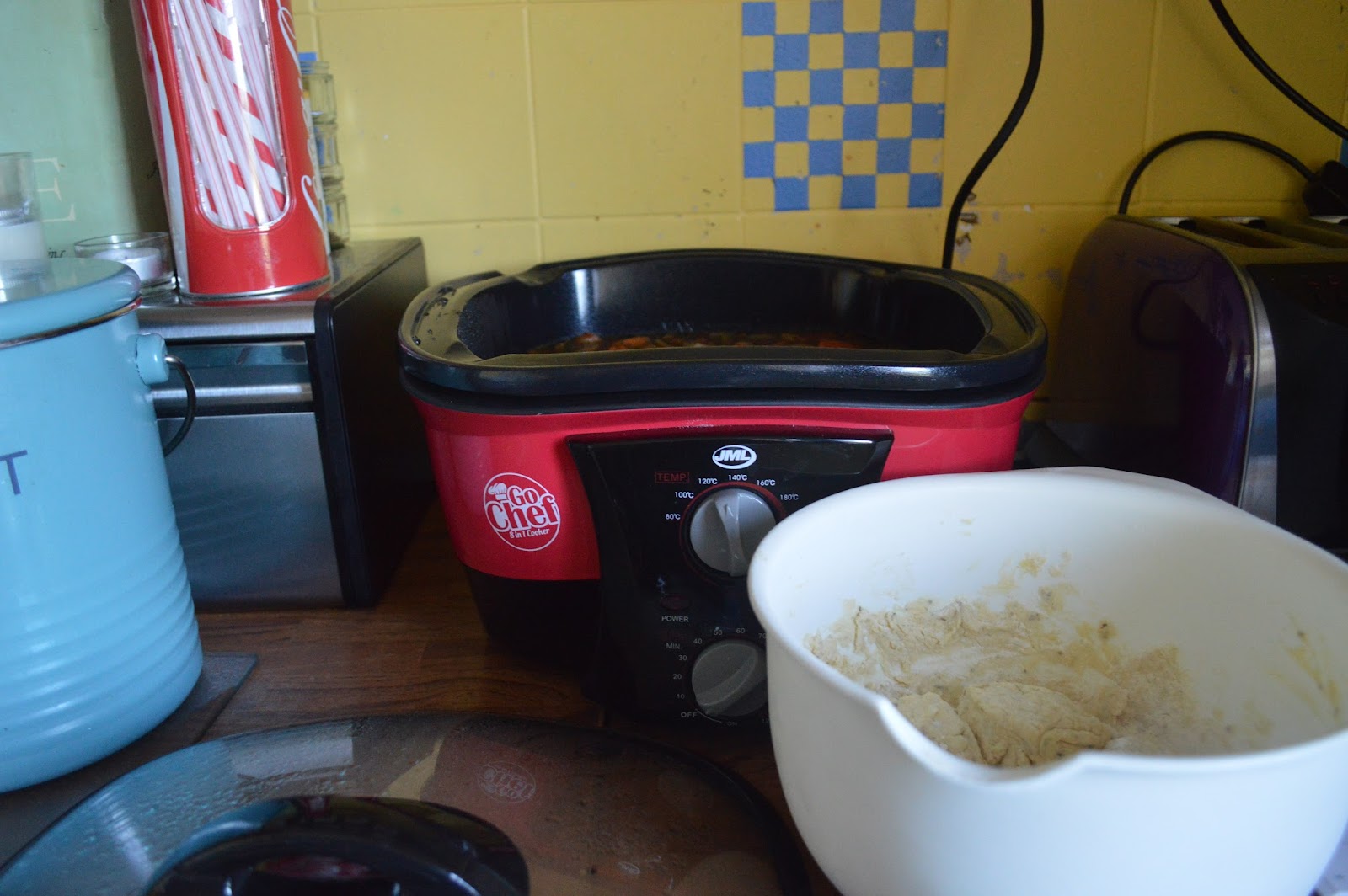 (No measurements, just vary ingredients depending on your family’s tastes and requirements.)

I poured a little oil into the bowl.  Next, I added the onion, mushroom, carrot and celery.   After a few minutes I added the quorn pieces.

Next I poured in the chopped tin tomatoes and vegetable stock. A sprinkle of pepper, mixed herbs and a stir then I put the lid on and allowed the stew to well, stew.

With the stew cooking, I got on with making the dumplings.  I put the flour and mixed herbs in the bowl, rubbed in the margarine then added milk until the mixture formed into a dough.  I divided the mixture and formed dough balls.  I set these to one side until needed later. 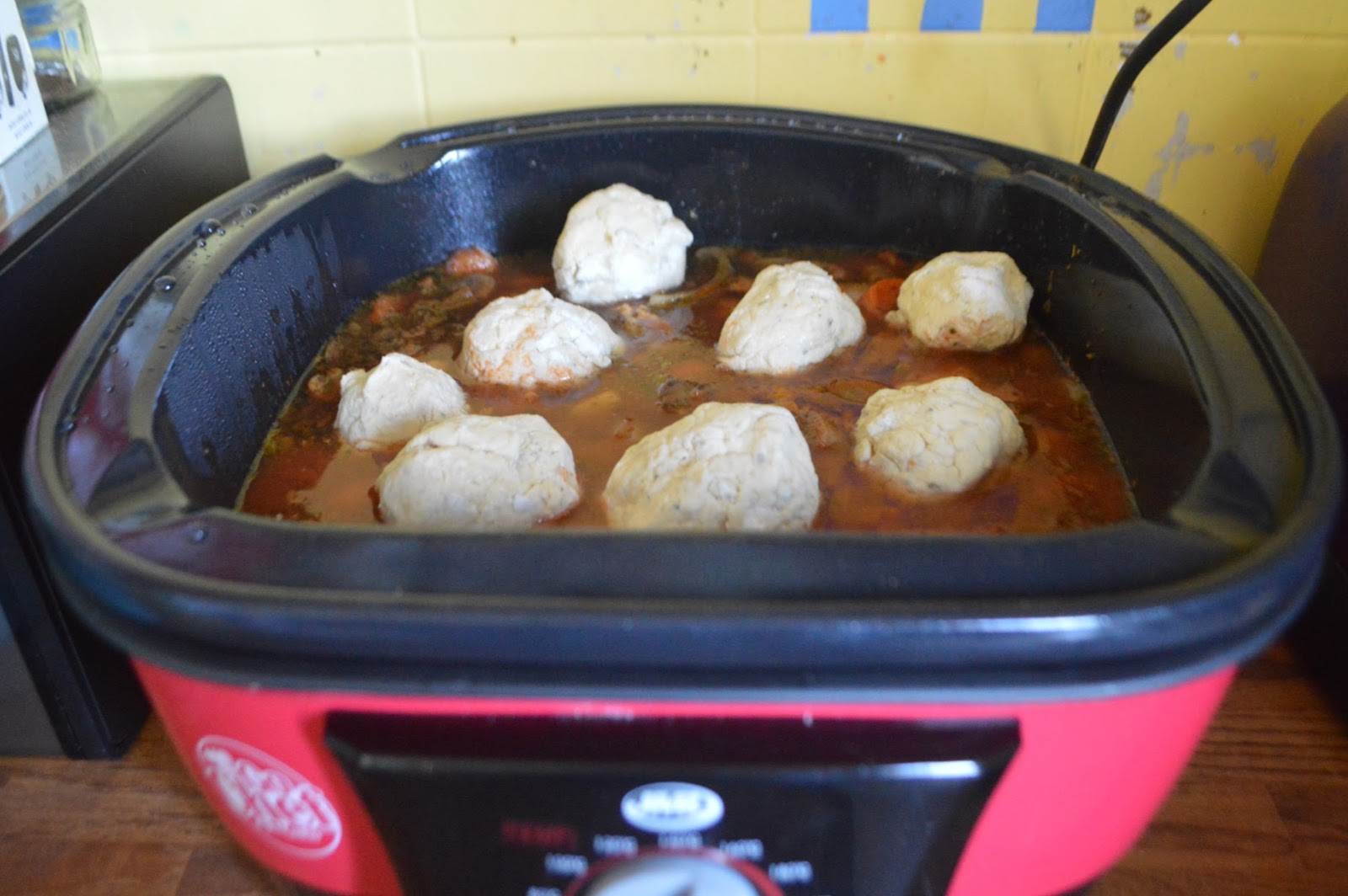 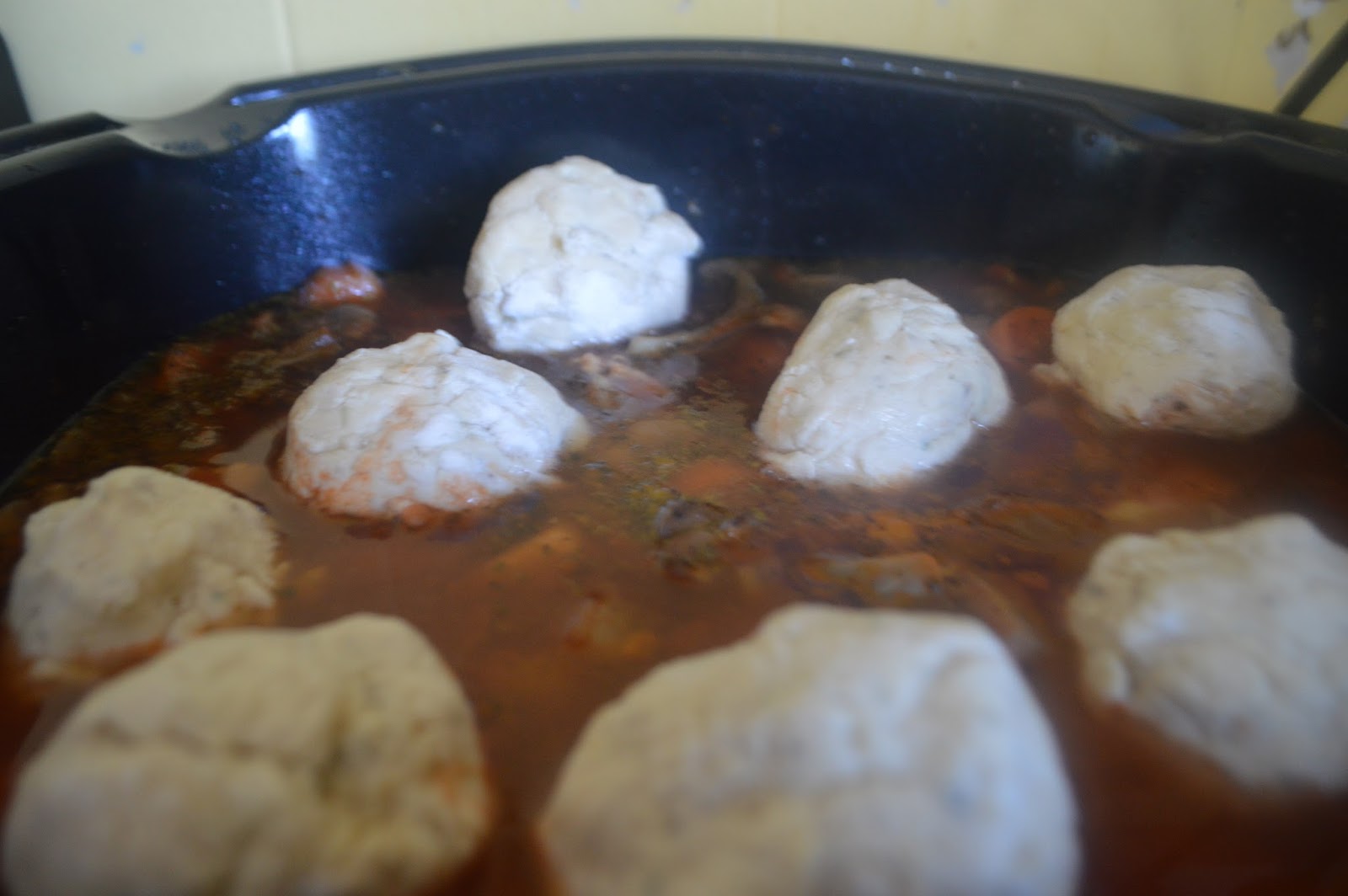 I set the timer to 20 minutes and left it.  After 20 minutes it was ready (and obviously it was very hot so always take care). 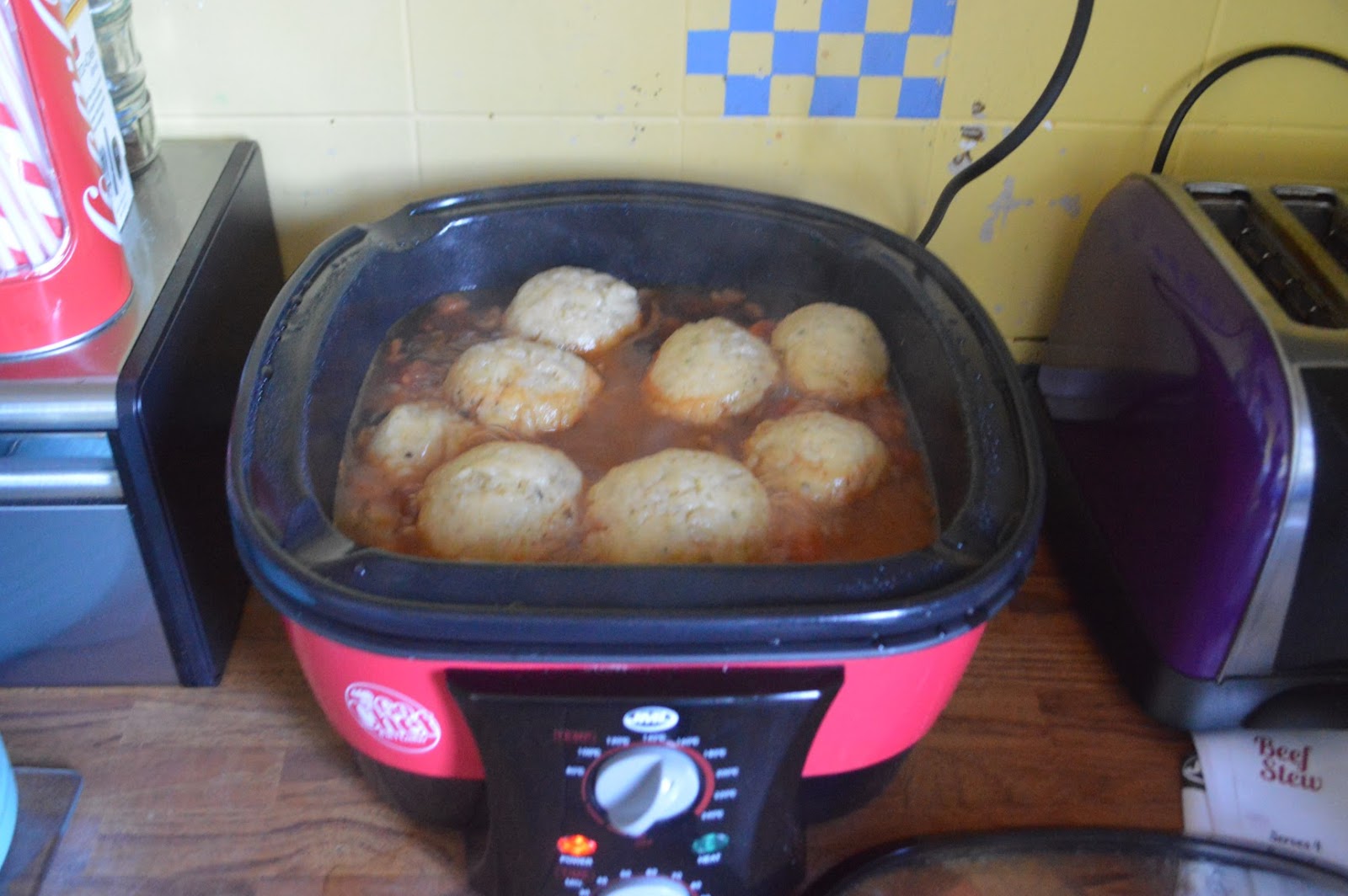 Once the kids were home from school, I added the dumplings and put the stew on for another ten minutes. 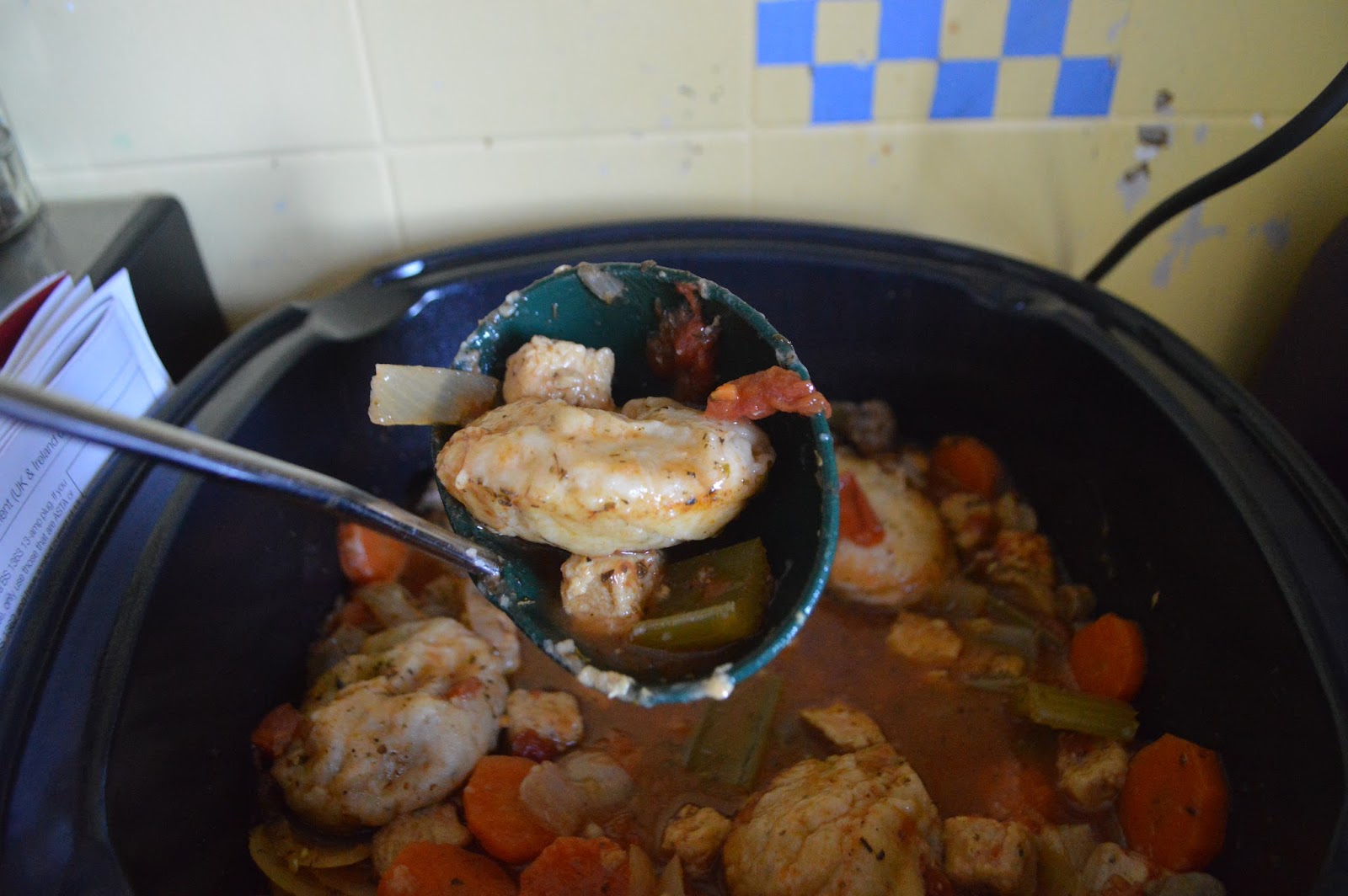 We dished up with some bread and cheese and it was delicious. 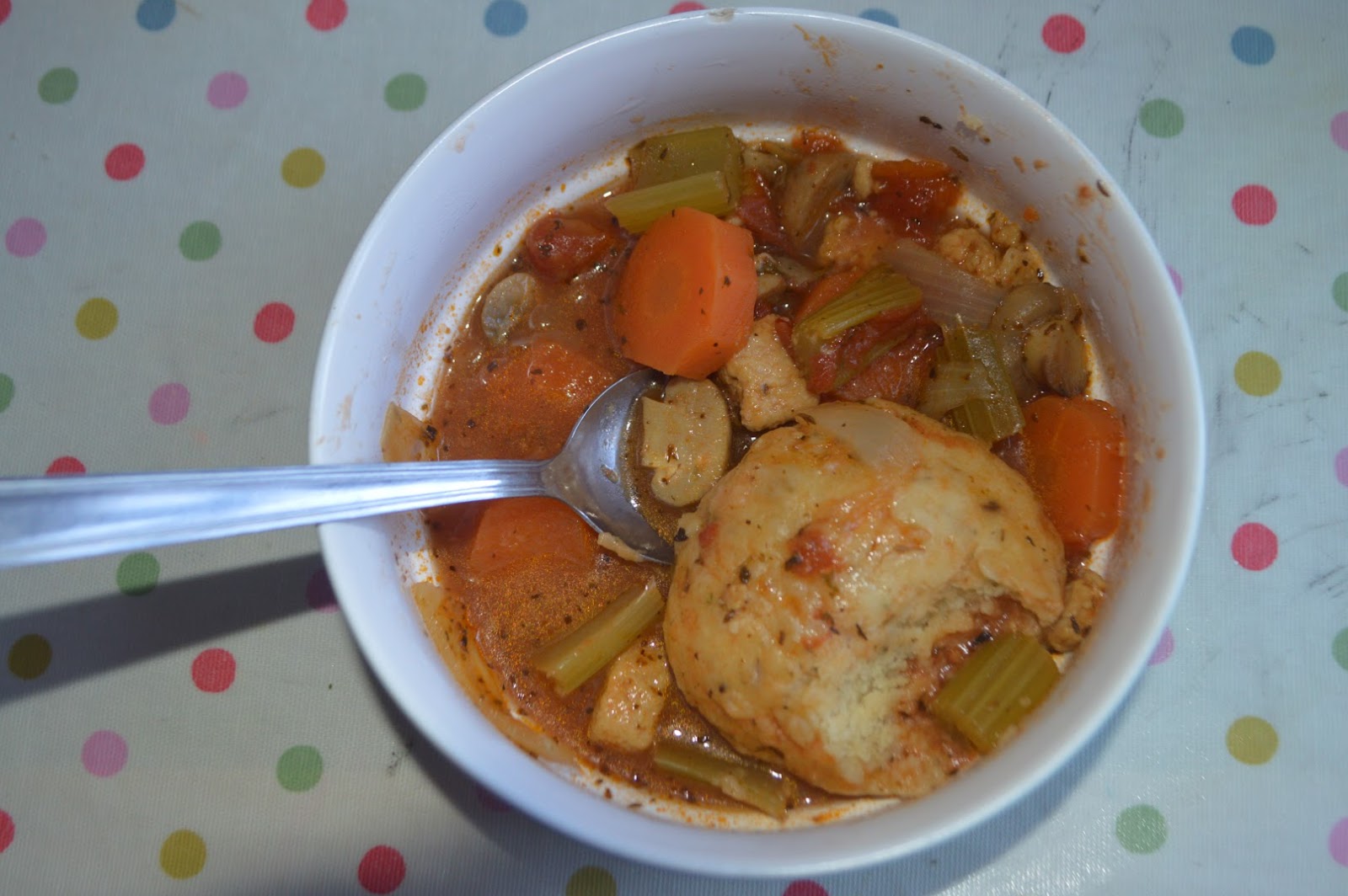 The house smelled so nice and I was very hungry,  so I nearly forgot to take a “food in the bowl” photo- oops.  We managed to cook enough stew for six (two adults and four children) with leftovers left for Izzy and me the next day (which was super easy to reheat in the Go Chef).

So, the slow cook function has been tested successfully by making a stew- now I need to choose what to make next.  The Go Chef 8 in 1 Cooker can roast, bake, sauté, boil, fry, fondue, slow cook and steam.

If I hadn’t been sent this to review, then I would not have bought this product- purely because I already have a functional oven, hob, microwave and breadmaker.  However, I am so glad I have it now for my slow cooking needs- although I don’t eat meat this will be great for vegetarian bean recipes.

I can also see how Dave could get use out of a cooker like this in his work premises kitchen- years ago he used to cook curries on an old range during lunch breaks, now they just use a microwave, with this they could vary their lunchtime  menu a lot more.

The other advantages to using this cooker are it uses less electricity and there is less washing up.  It’s great to come home after a busy day to a meal ready to heat up and serve immediately too.

Ooh, what shall I make next?  Any ideas?


Disclosure:  We were sent the JML Go Chef 8 in 1 Cooker to review.  All opinions are our own.