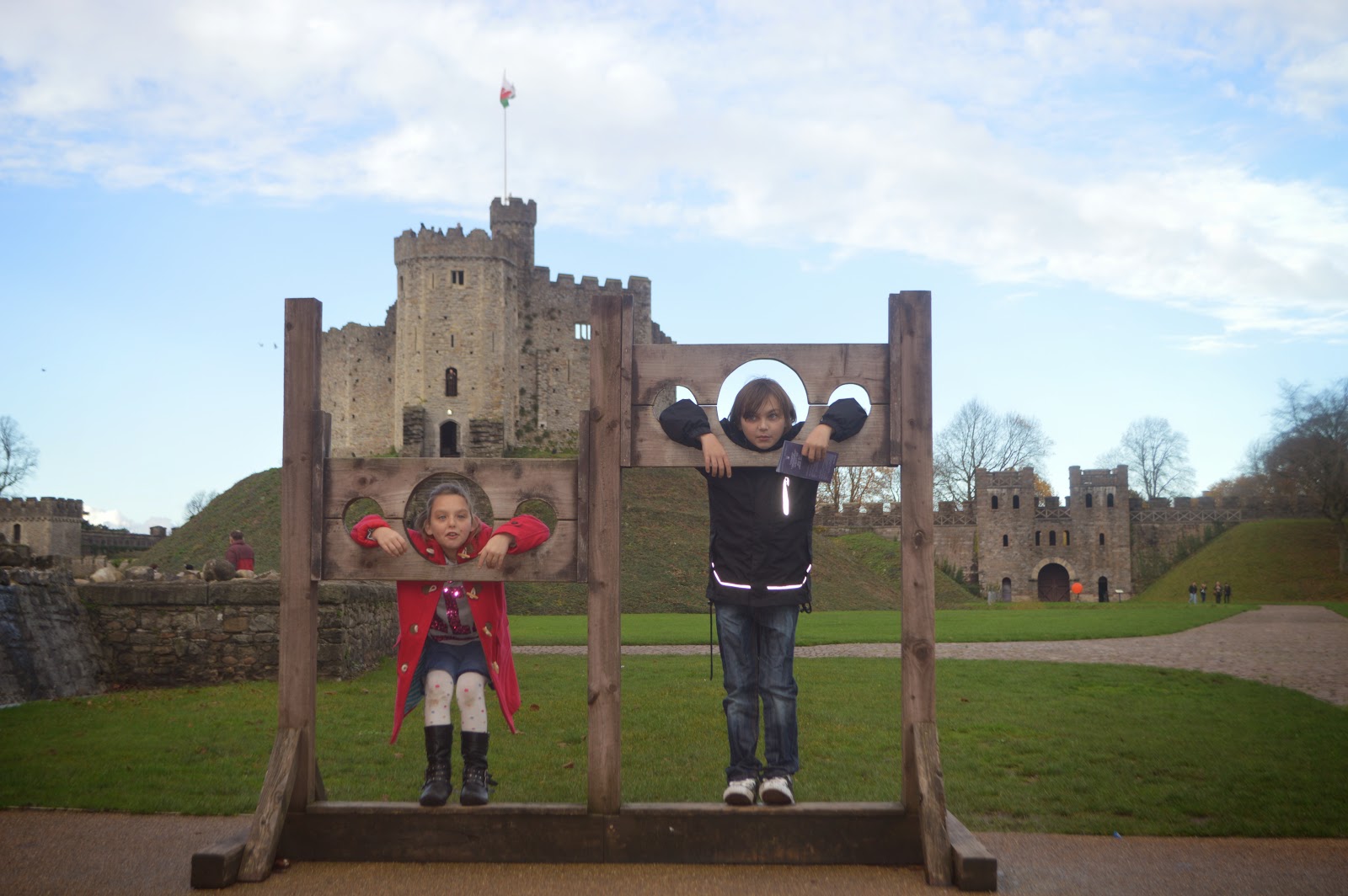 I have no idea why it has taken me so long to visit Cardiff Castle.  I love Castles and regularly explore our local ones in Pembrokeshire.  However, despite travelling to Cardiff often and of course passing the magnificent, Medieval fort I had never before stepped inside.


When I was asked to choose a place in Cardiff to review, although I know the kids love returning to Techniquest and The Doctor Who Experience time and time again, I saw this as the perfect opportunity to put things right and to visit the Castle of our capital city of Wales. 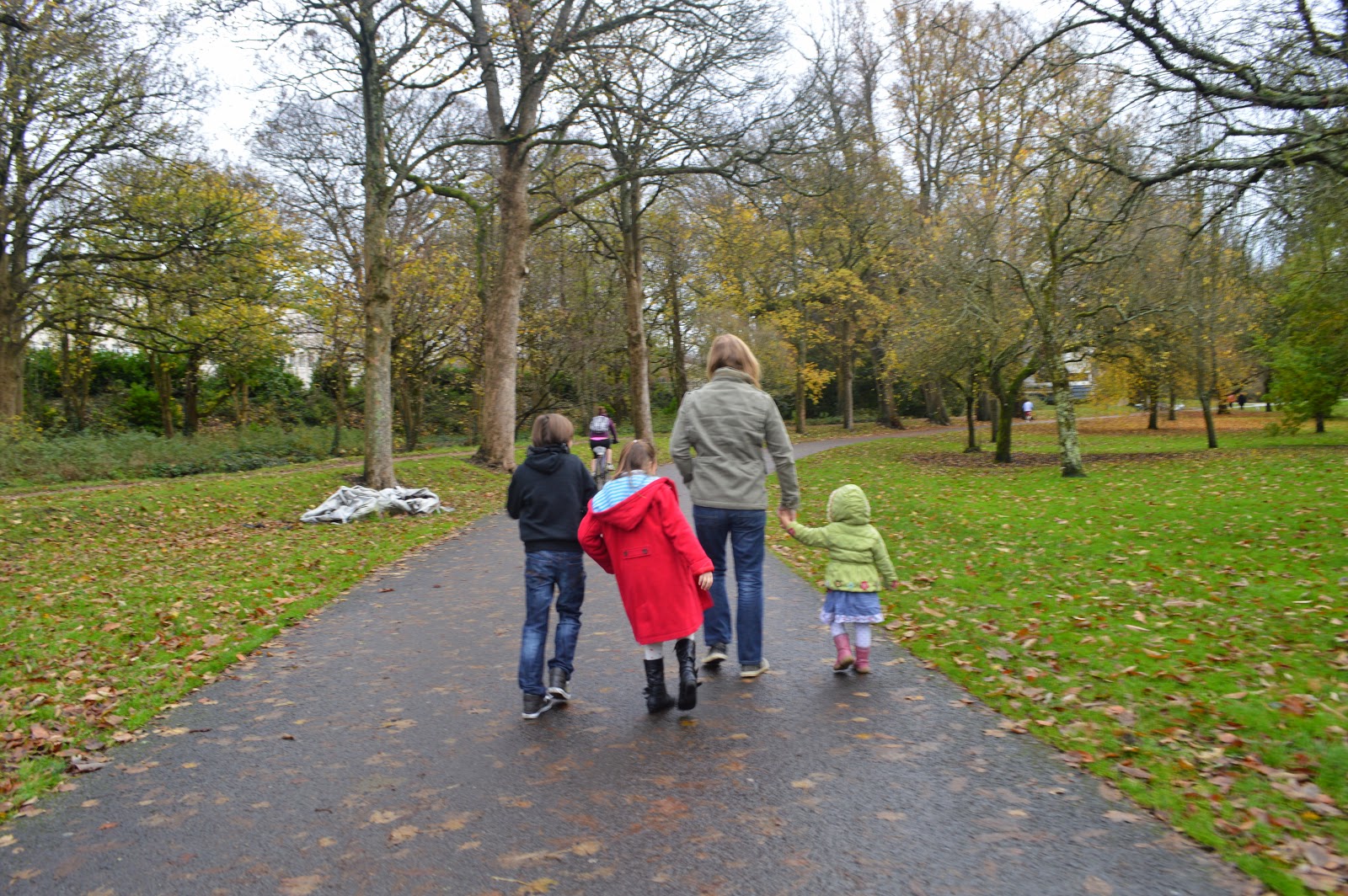 We travelled on the M4 from the South West and parked at North Road Car Park (Sat Nav ref:  CF10 3DY.  As we arrived after 12pm it cost us a very reasonable £3.60 to park all day.  Our favourite reason for parking here though is it takes you on a beautiful walk through Bute Park to get to the Castle. 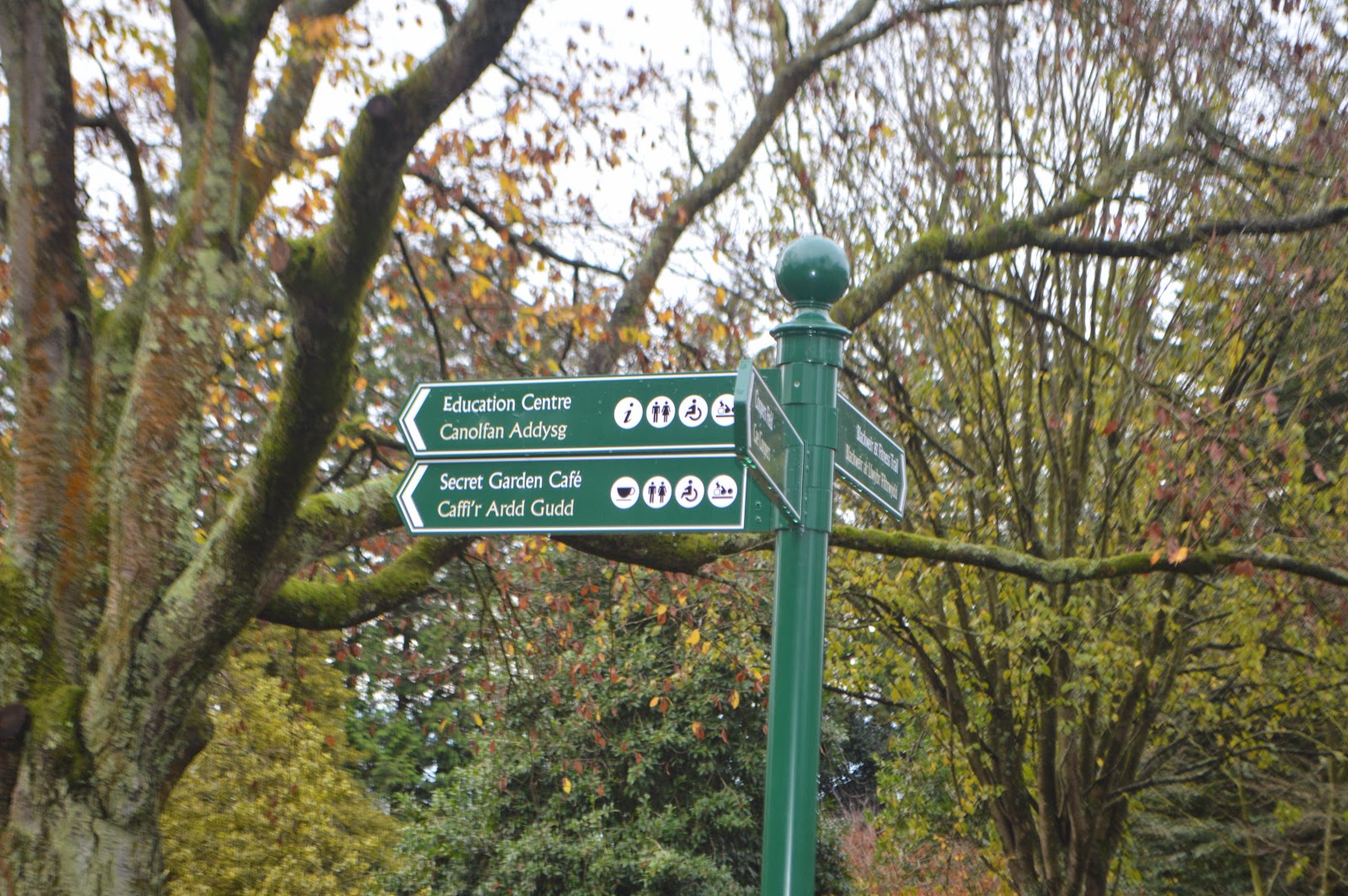 We stopped at the Secret Garden Cafe, in Bute Park, for a baguette (£2.50 each) before exploring the castle.   Pettigrew Tea Rooms, adjacent to the castle, is also lovely for  an afternoon tea treat. 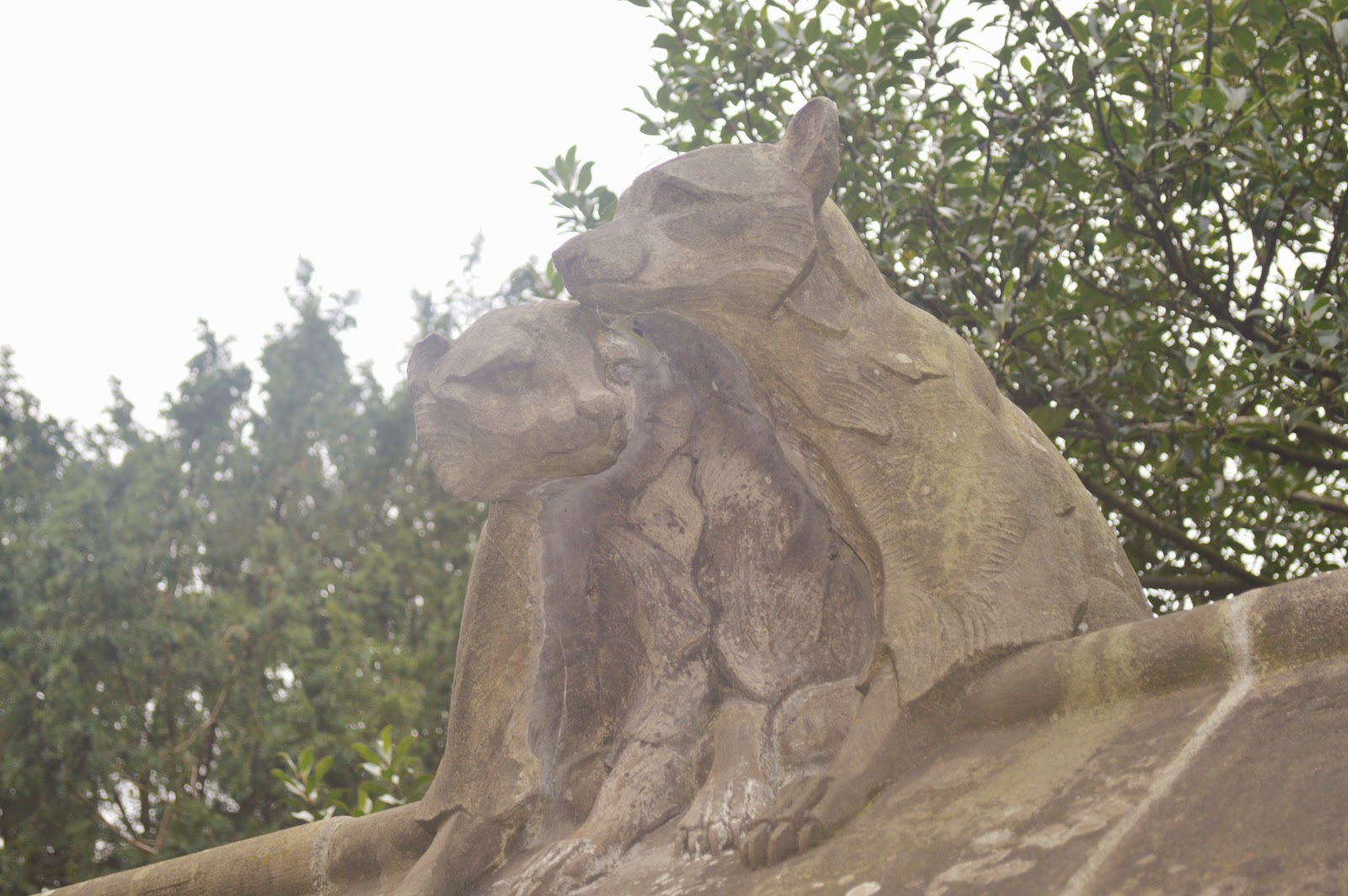 
As you approach the castle, look out out for the delightful animal wall.  My kids love to pass this and spot all of the species.  It was originally built in the 1890’s, but was moved and rebuilt in 1923 when six more animals were added.  The original animals have glass eyes that really seem to stare at you as you pass by. 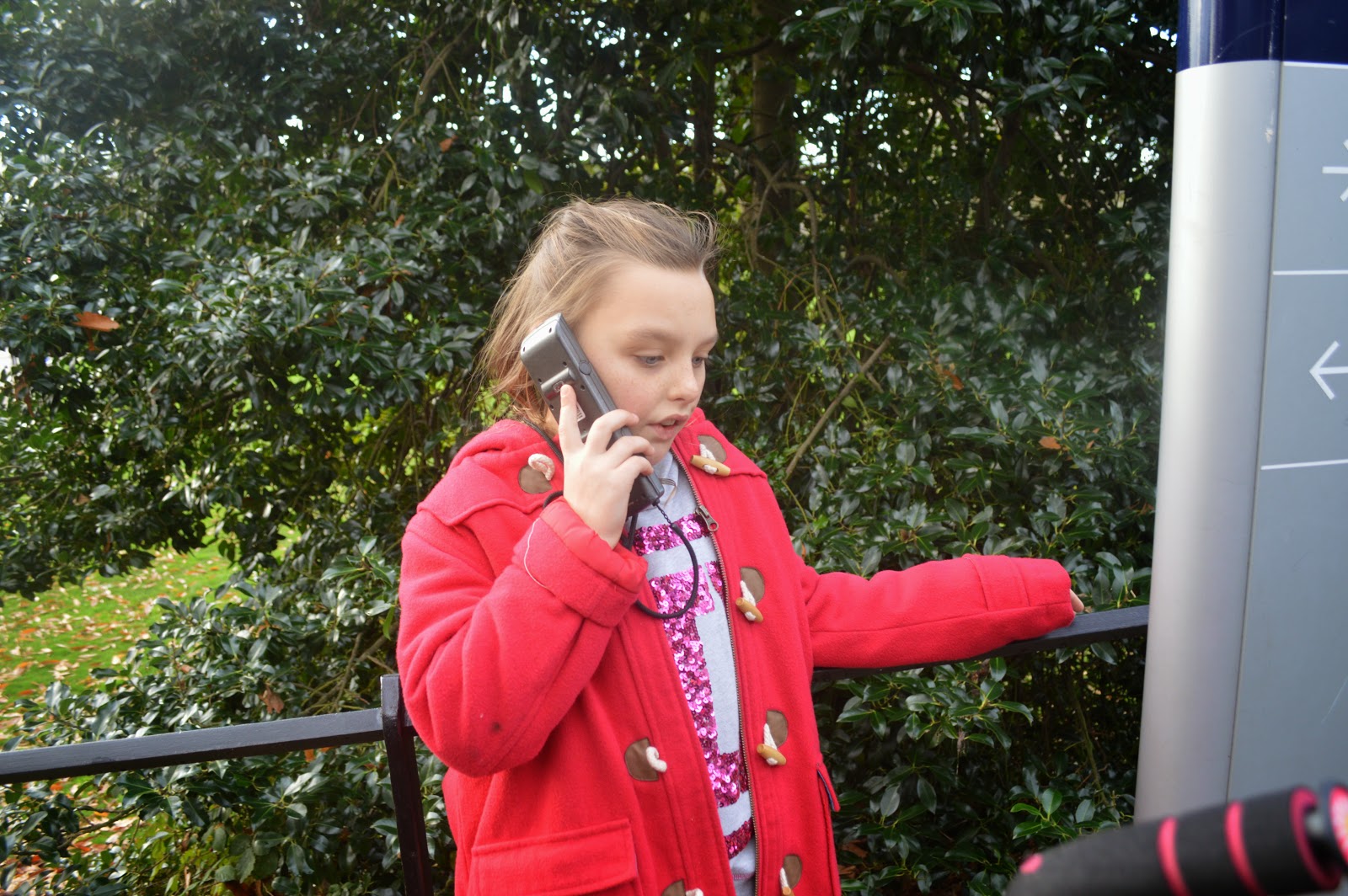 
At the castle entrance we went through the gates and passed under the Portcullis.  We made our way to reception.  Free audio guides were available.  We picked one up to share as a family, but next time we’ll have one each, especially as there is also a children’s version.  These are great, just enter the number on the sign and listen to the information. 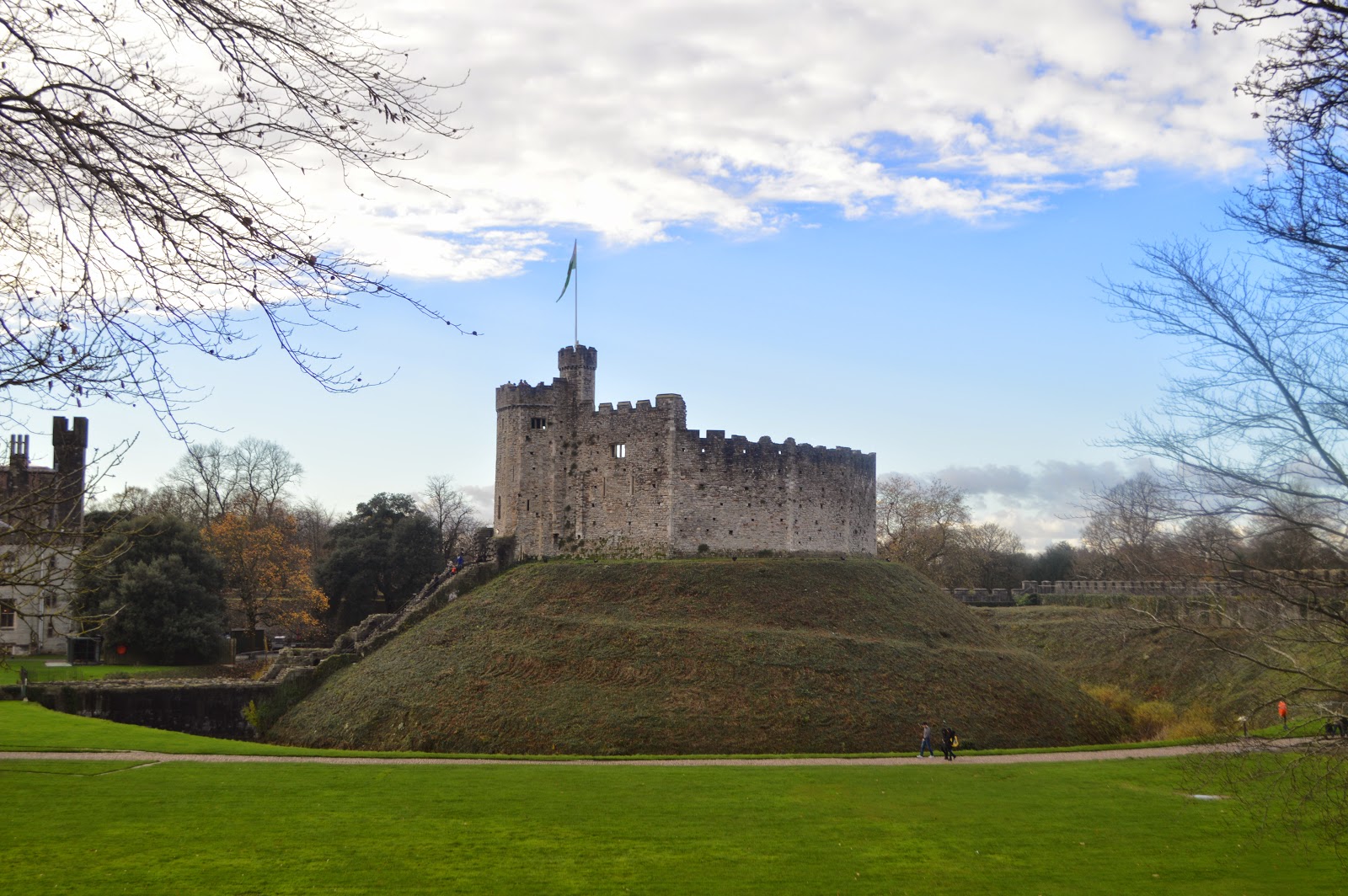 
We were then in the castle grounds, ready to learn about 2000 years of History.  I admit that I just stood in awe for a while, taking in the glorious surroundings.  Dave then brought me back to my senses and suggested we take a look at the War Tunnels. 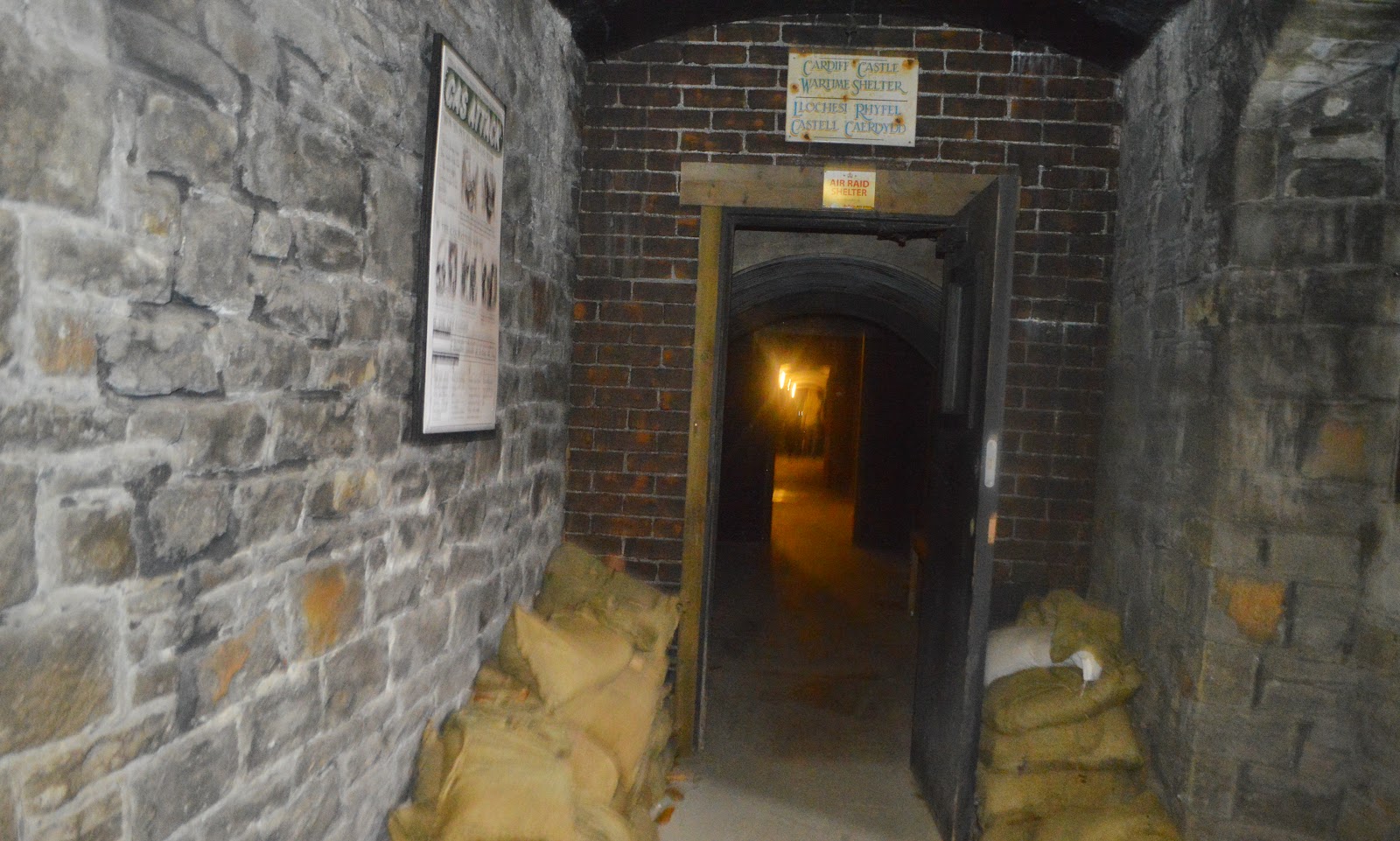 
During History lessons in school, I enjoyed learning about the Home Front, how everyday people at home were affected by the war.  I knew that Londoners used the underground deep level tunnels as air raid shelters when the sirens sounded during World War II.


What I never realised until recently was that people of Cardiff  were invited to use the Castle Tunnels as Wartime Shelters.  It is estimated that around 1800 people who lived or worked in the city would take shelter here when the sirens sounded.  Today, you can walk along the dark tunnels and see for yourself what the air raid shelters looked and sounded like.  In the Summer Holidays you can even join a free tour, guided by an Air Raid Warden in full costume.  We will definitely return next Summer to do this- without Rebecca who found the experience a little frightening due to her fear of enclosed spaces and the dark!
There are also many wartime posters and advertisements on display which I always find very interesting. 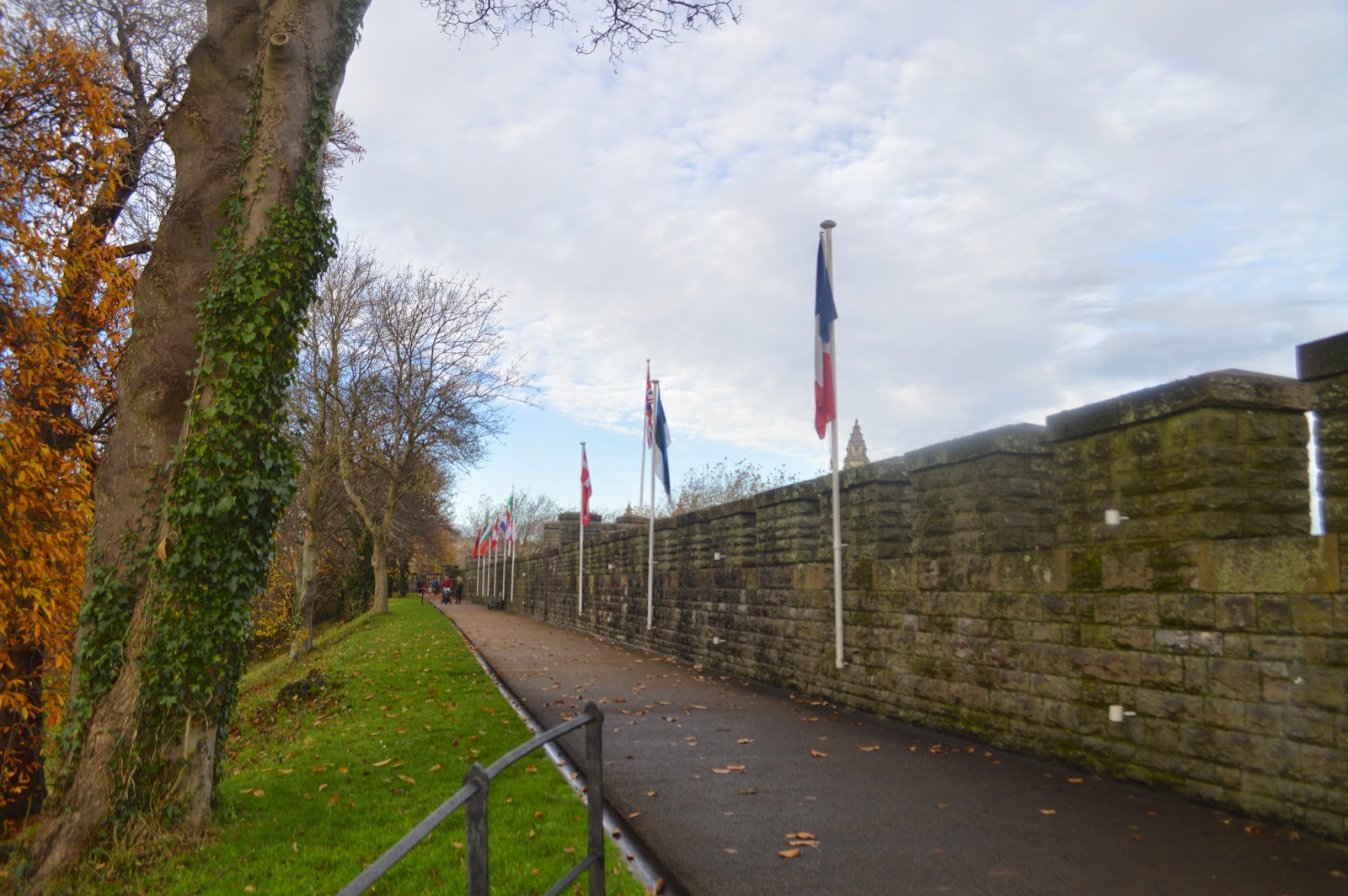 
I was pleased that the Battlement Walk was accessible for pushchairs and wheelchairs, unlike in most castles were the walks are only accessible by steps.  We enjoyed a walk across it, looking at the defence features, the stunning view and also enjoying the wildlife.  Birds and squirrels were busy finding food ready for the cold approaching Winter.  They were quite tame and came close to the children. 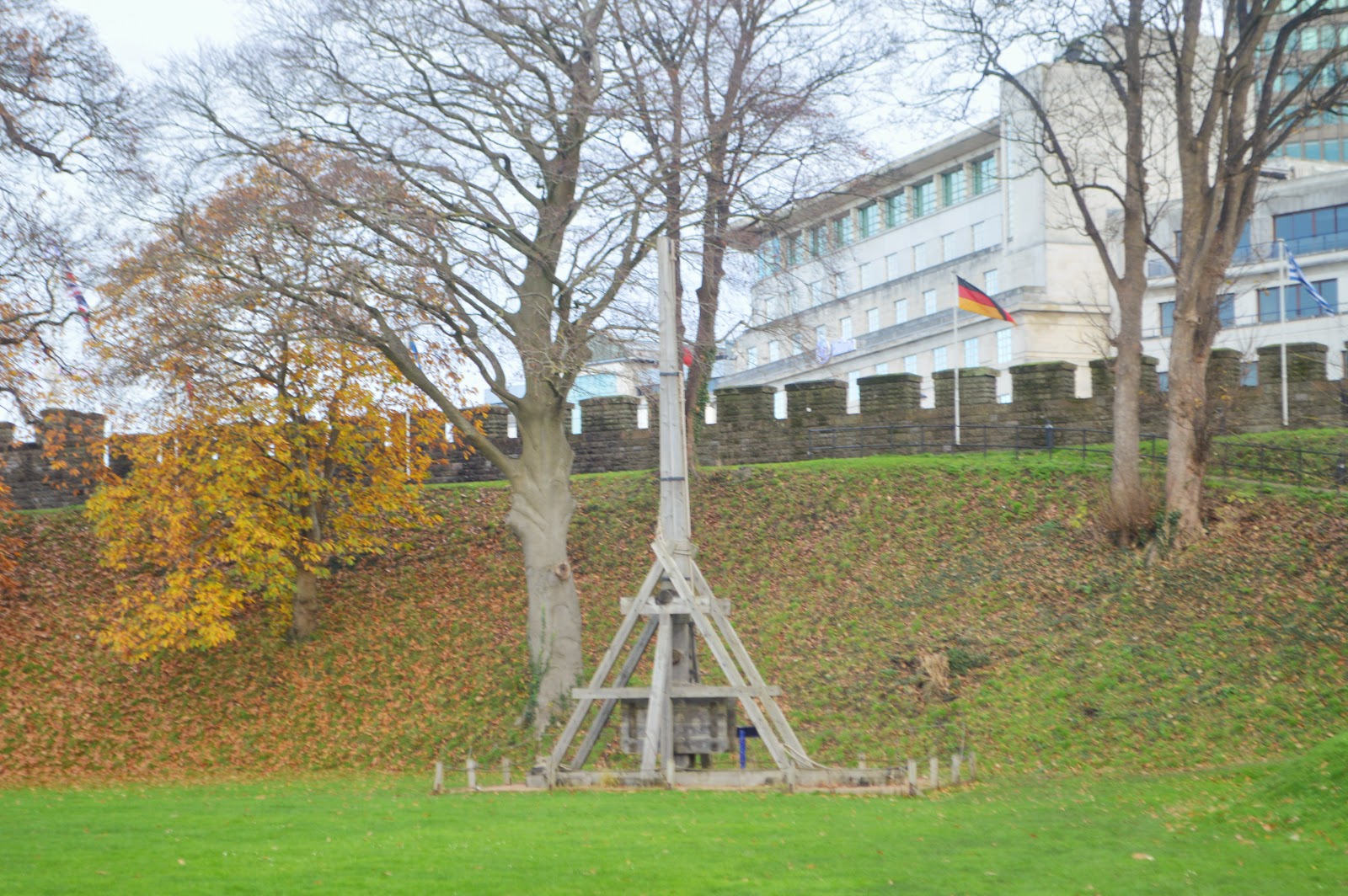 
The Trebuchet located on the Castle green, is an accurate, working replica of one of the deadliest military machines of it’s time,   It was originally made for the Hollywood movie Ironclad and here in Cardiff, a team of eight members of Cardiff Castle staff, ‘The Trebuchet Team’, have been trained to load and fire this medieval piece of technology.


Danny would love to see this fired one day.  He used to love playing with the trebuchet that came with his play castle when he was younger. 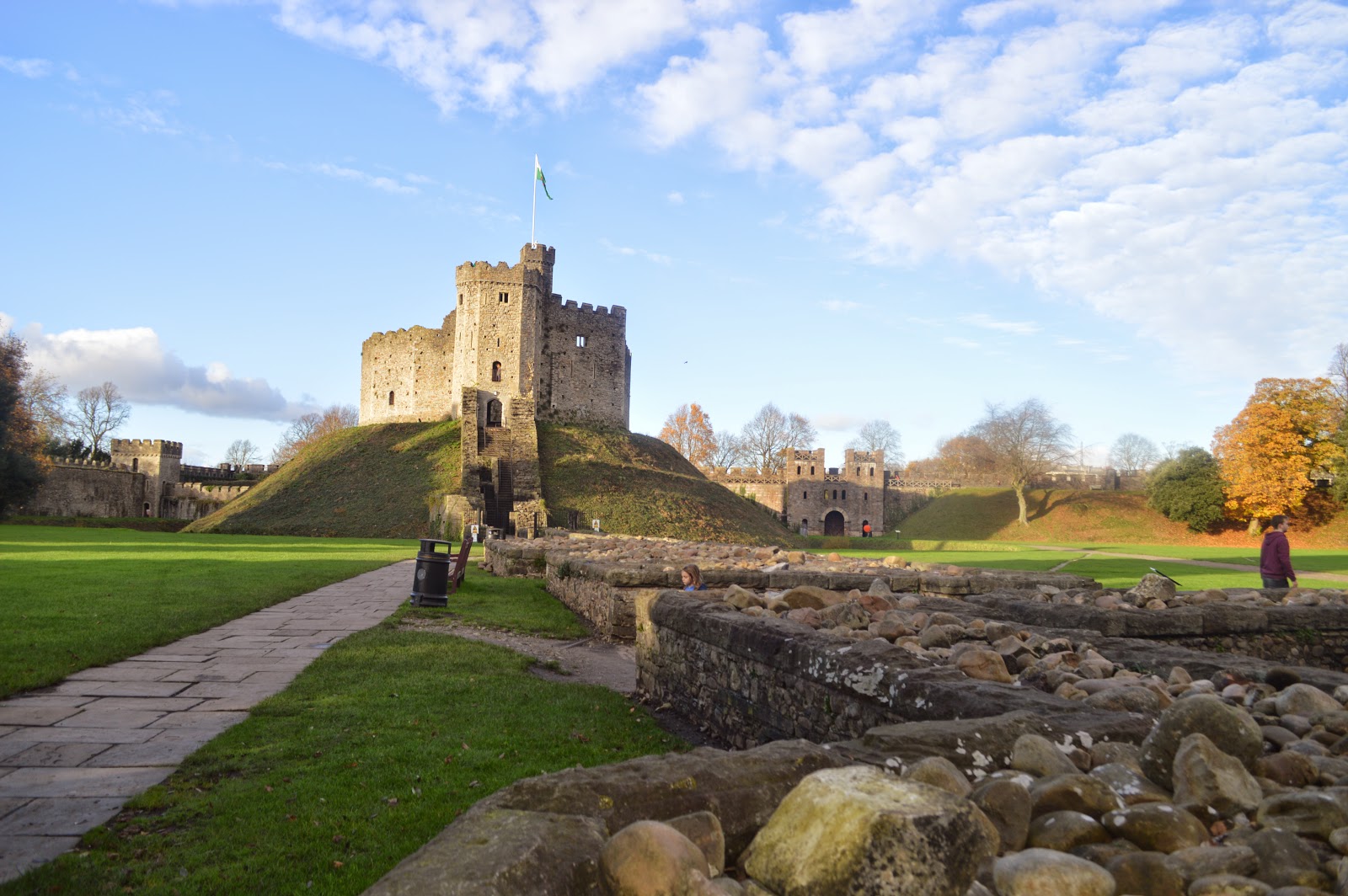 
The Norman Keep is only accessible by steep steps, so Dave, Danny and Caitlyn went up to enjoy the panoramic stunning views, whilst Izzy, Rebecca and I looked out for them appearing at the top.  The Keep would literally keep everyone in the Castle safe at times of attack.  This is a fine example of a classic motte and bailey fortification.  Inside the Keep look out for signs of a fireplace, staircase and evidence in the stone work showing where the floors would have been. 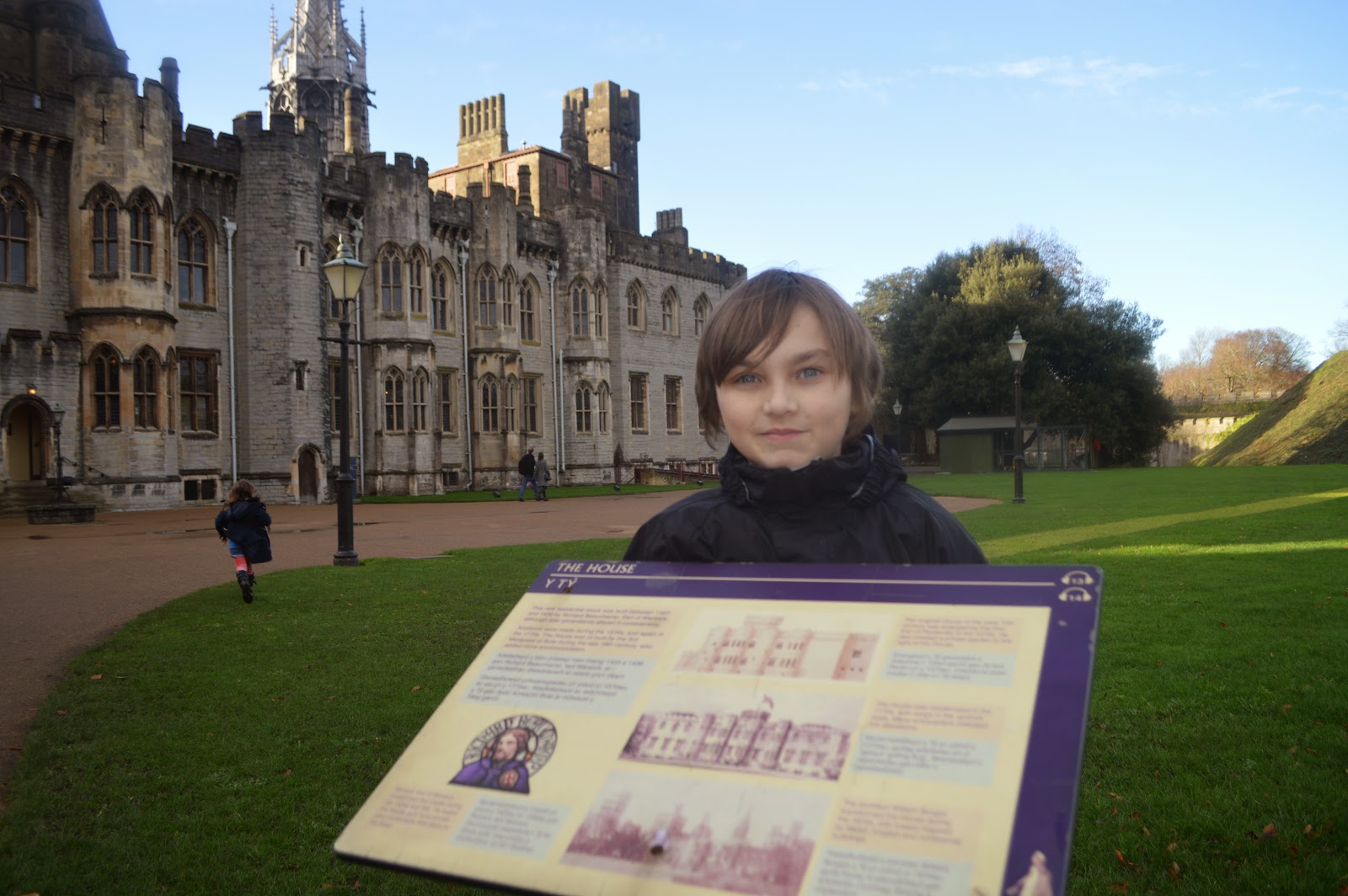 
Aside from the War Shelters, the other “modern” surprise for me were The Castle Apartments, or The House.  Art Architect, William Bruges, created this “Victorian Gothic Fantasy Palace” for the 3rd Marquess of Bute.


It is surprisingly opulent, especially when compared to the Roman and Norman features.  We looked around The Arab Room, The Dining Room, The Library and Banquet Hall.  More rooms can be viewed (and more lessons learnt) by booking a House Tour at Reception.  I would recommend this. 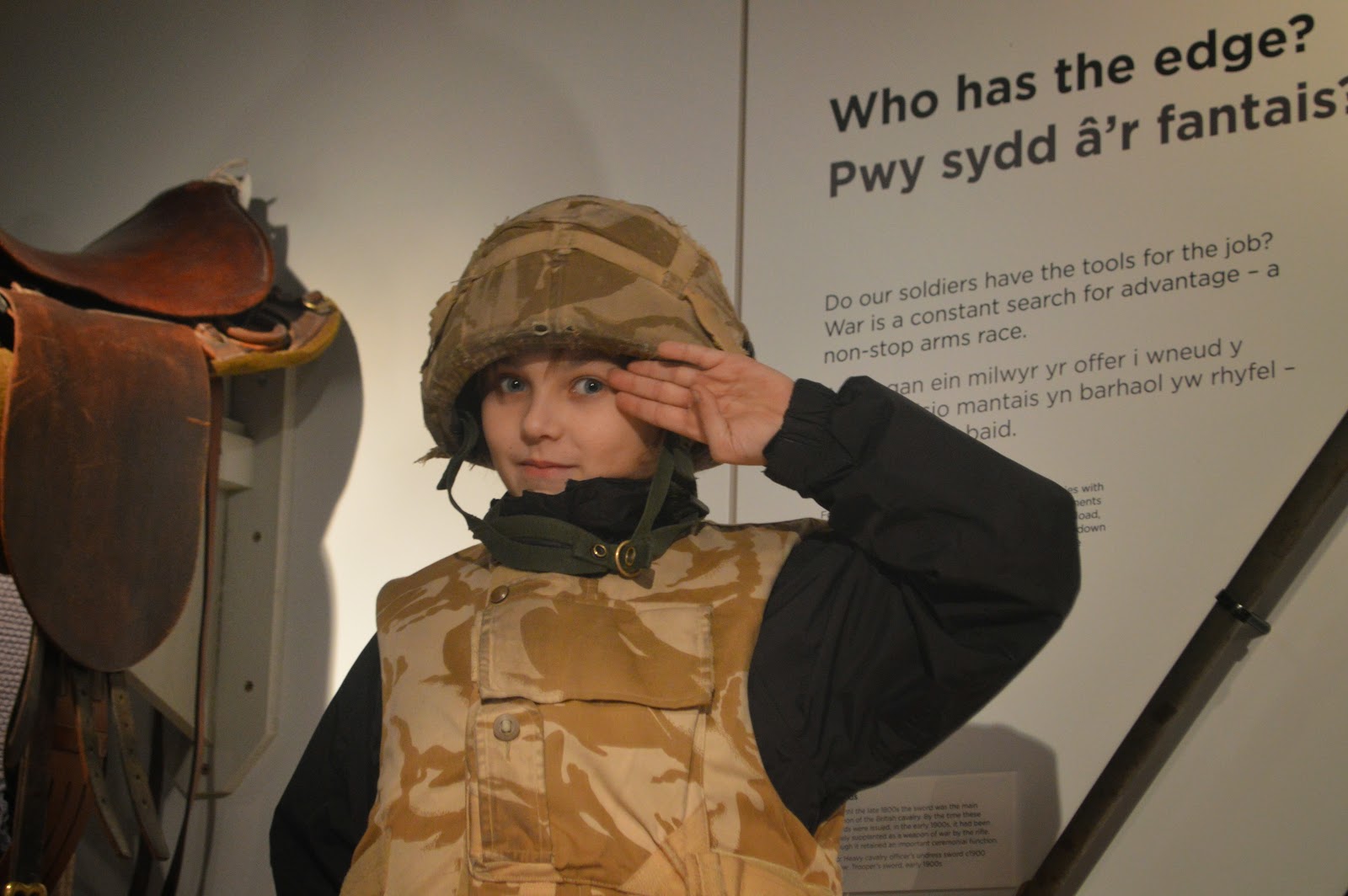 
I assumed the museum was going to be about castles, but of course the history you learn from castles comes from the land and buildings itself.


The kids loved trying on the authentic uniform from different eras-they were surprised by how heavy the helmets were and how the older uniforms were harder to put on.


Danny also got to hold a rifle and the interactive displays held the children’s attention.  I found out why Goats are Welsh military mascots and still take part in ceremonious displays  today and also learnt that all military medals are still made at the Royal Mint in Wales. 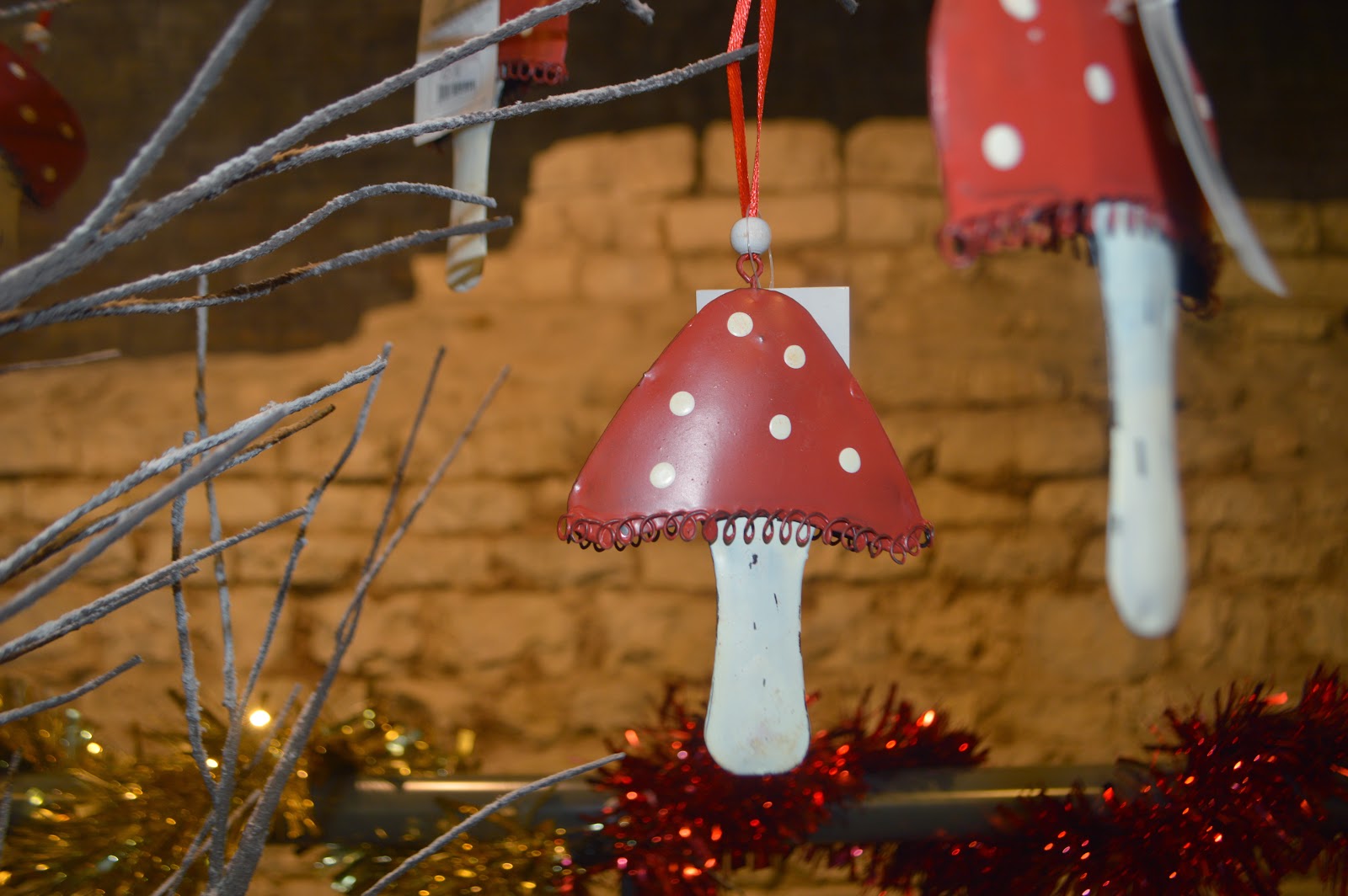 The Shop and Roman Wall


The original exposed Roman Wall can be seen in the Interpretation Centre, which houses the Cafe, Film Show and Shop.


The shop had lovely gifts, from swords and dressing, up to books and keepsake ornaments.


I loved these hanging “magic toadstools” and the Roman wall can be seen behind.


We had a lovely fun filled day at Cardiff Castle and there is more to do too- we didn’t visit the North Gate and there are also  Film Location  and Clock House Tours which can be booked, so we will definitely  be visiting again!

We received tickets for Cardiff Castle for the purpose of this review and as part of the Millennium guide to Cardiff.  All thoughts and opinions are our own.

I have lots of photos and footage so a video is coming soon!