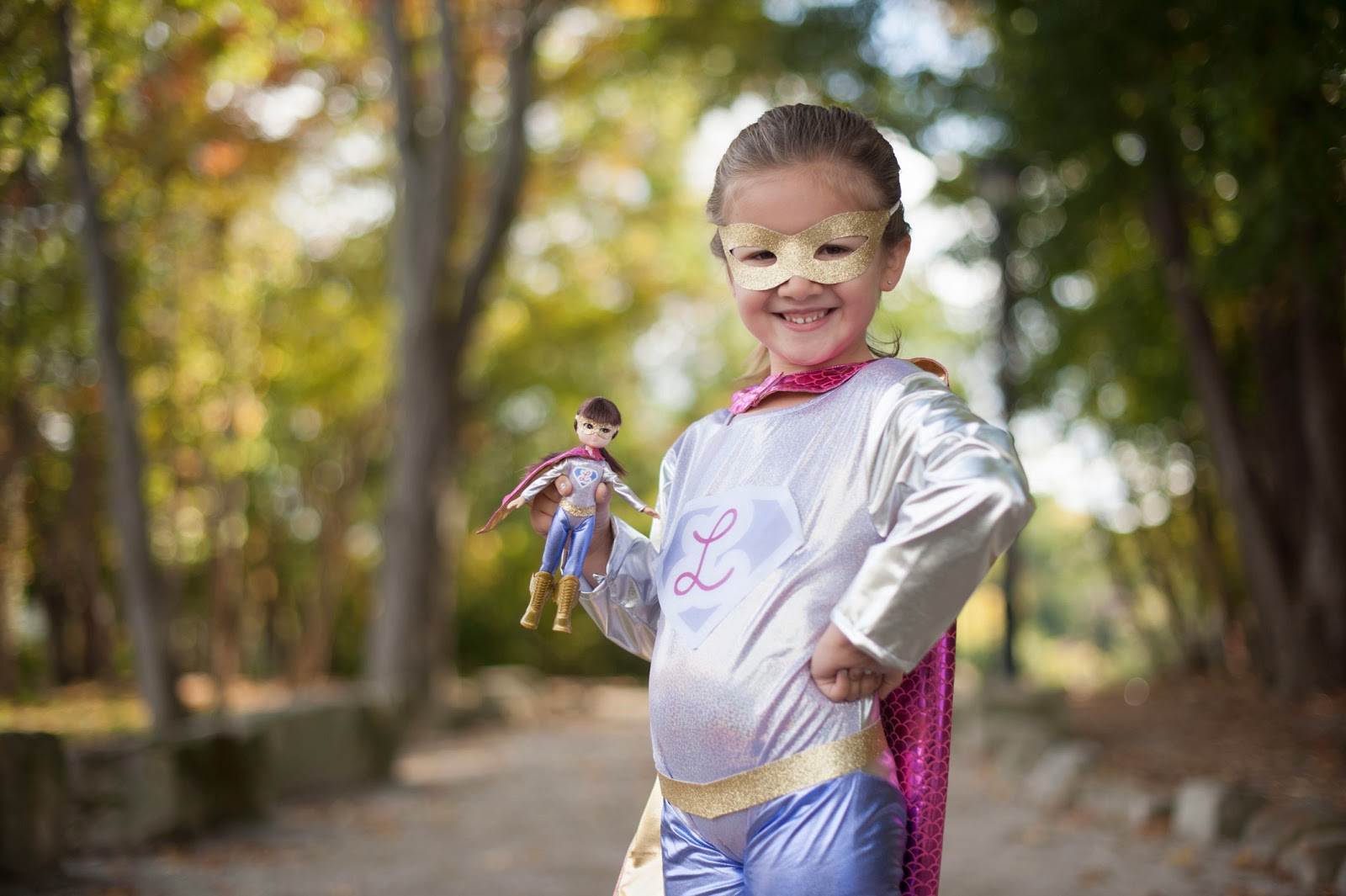 In 2011 the United Nations General Council declared 11 October as the International Day of the Girl Child, to recognize girls’ rights and the unique challenges girls face around the world.  This year, the theme is Empowering Adolescent Girls:  Ending the Cycle of Violence. 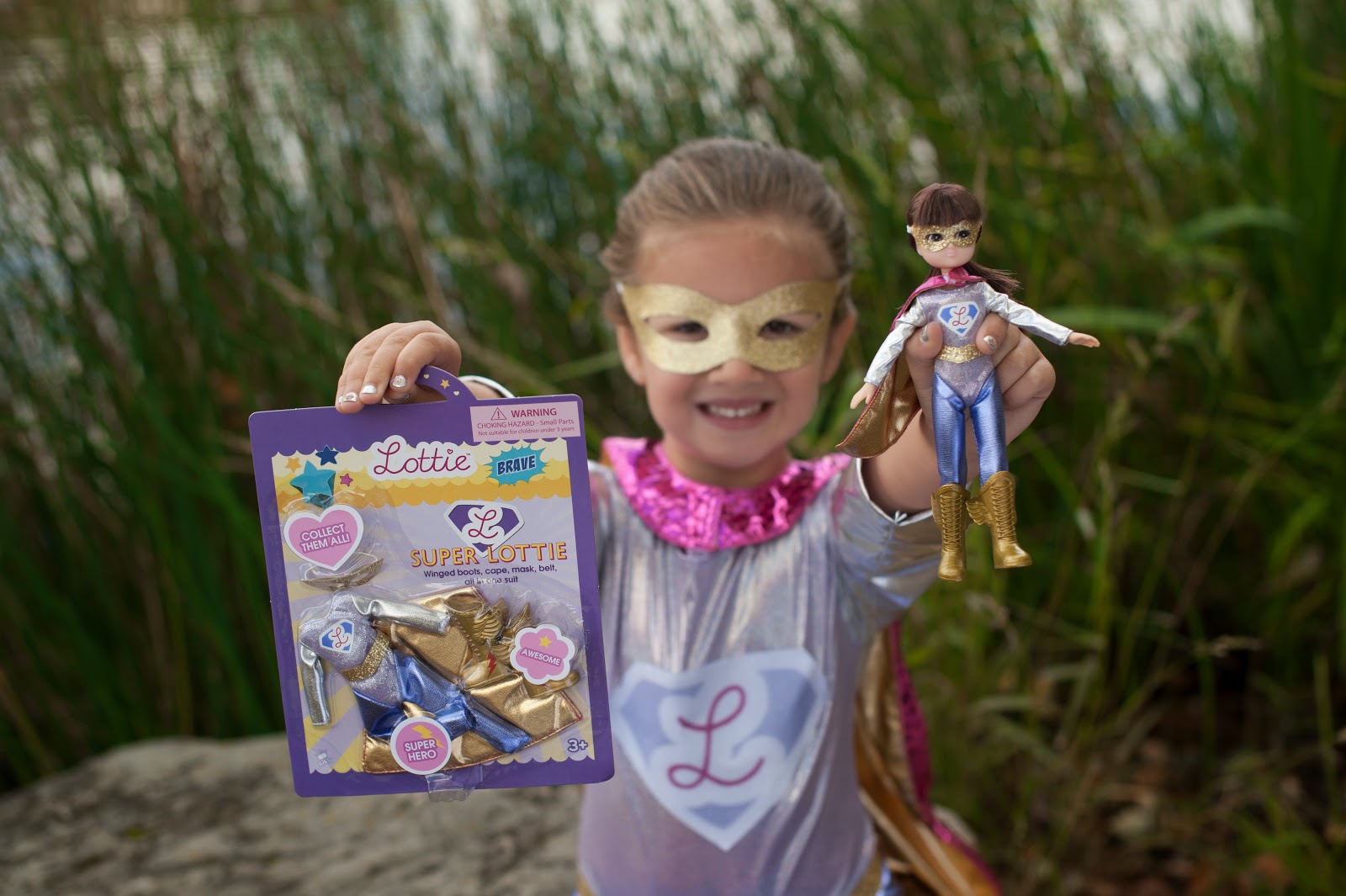 Empowering adolescent girls, of course, begins with empowering younger girls and showing them positive female role models.  A Mighty Girl  and The Brave Girl’s Alliance are websites  that do their best to show girls both positive real life role models but also to  encourage healthy media characters and products. 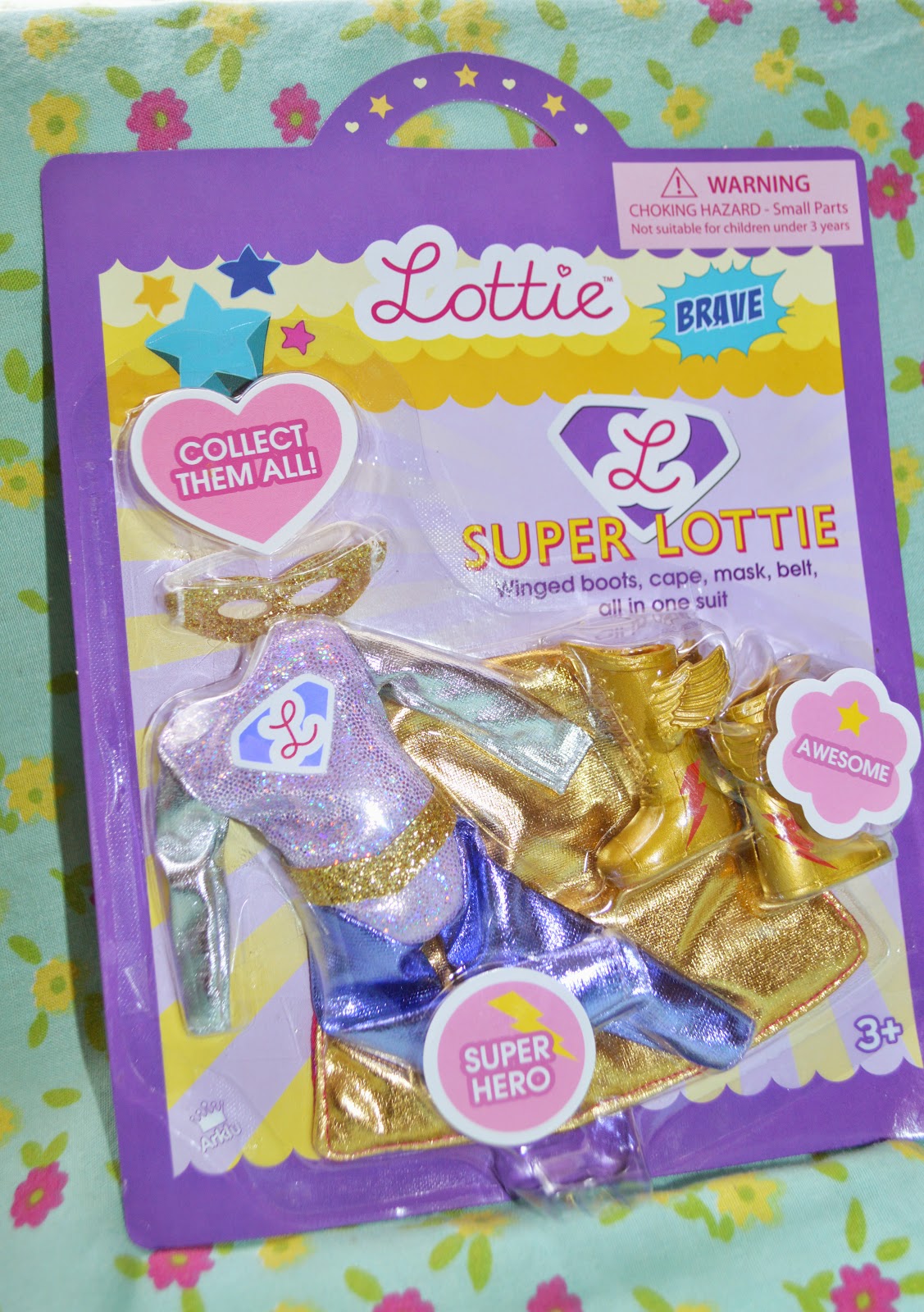 UK toymaker, Arklu, is helping to end the dearth of female superheroes available on toy shelves, with the introduction of a NEW superhero outfit, which has been designed by a child for the multi-award-winning Lottie™ doll.

As Lottie Ambassadors, we were sent the “Super Lottie” outfit to put on our Lottie Doll.

The ‘Super Lottie’ outfit is the inspiration of six year old Lily, from Ohio, USA, who created the winning design as part of a global competition, independently judged by the Brave Girls Alliance, earlier in the year. 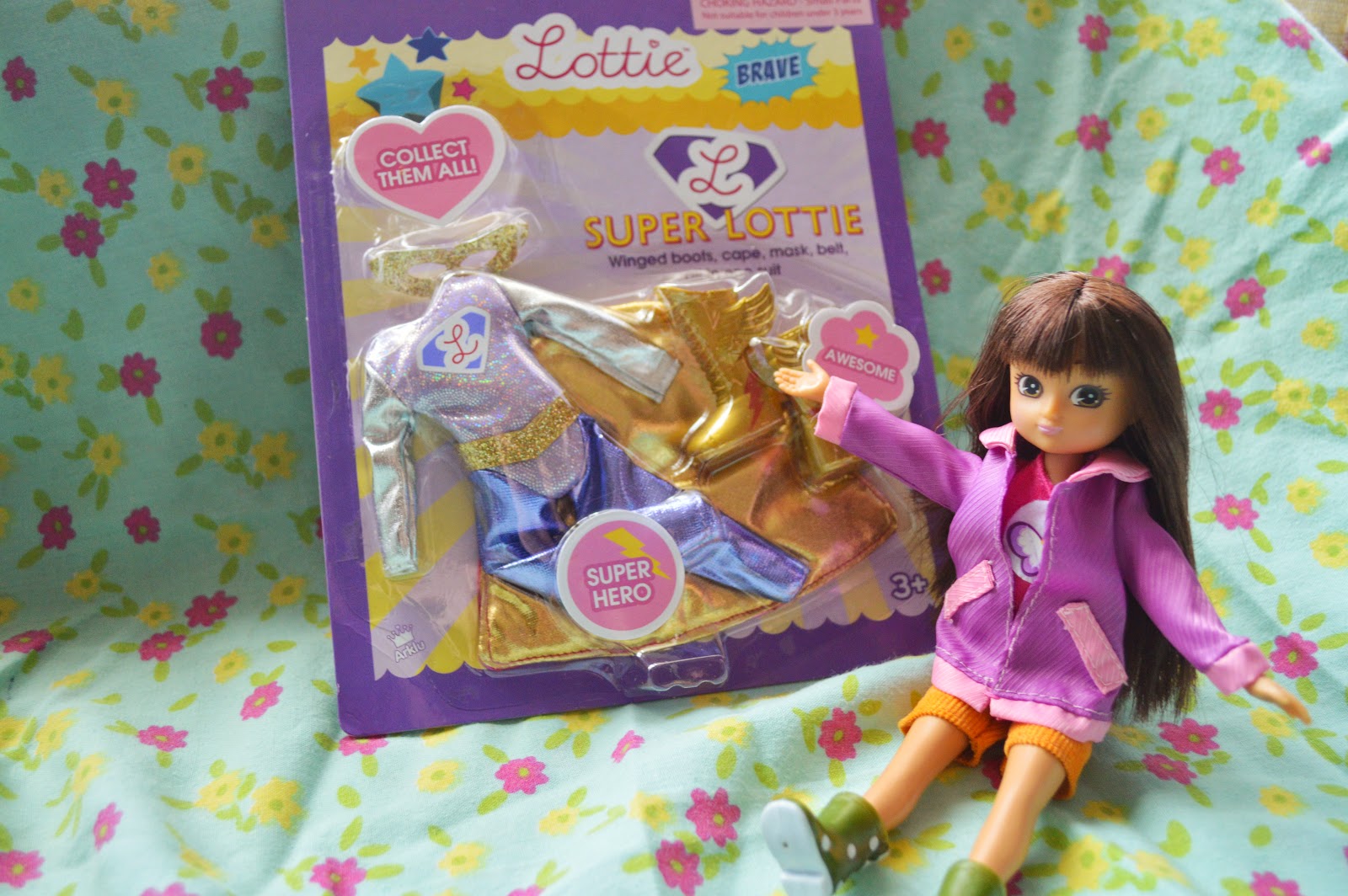 As part of her entry, Lily was asked to define Super Lottie’s abilities. Lily’s response was one designed to inspire girls who play with Lottie dolls, to acknowledge and embrace their potential, and accept who they are:


‘Super Lottie has the power to be anything, to do anything, and to make the world a better place. She is unique and special in her own way’. 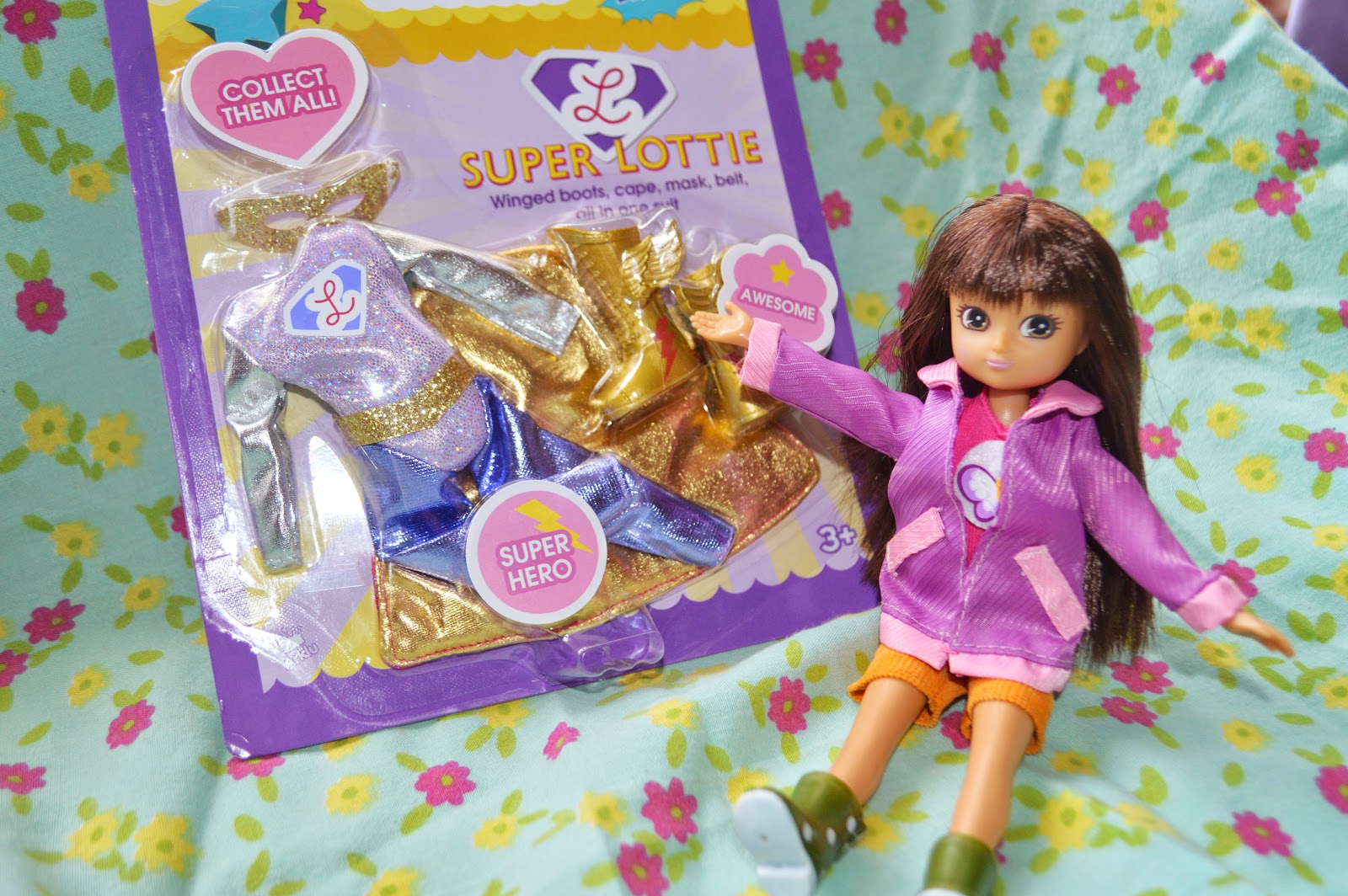 The competition was a result of a campaign launched to demonstrate that girls can be superheroes too.  A poll conducted among parents, demonstrated a severe lack of female representation in the world of super-powers, where of the top female superhero characters popularised by comic creators and film-makers, not one could be identified by 100% of respondents. In stark contrast, four male superhero characters could be identified by 100% of respondents; Superman, Spiderman, Batman and Hulk.

I asked my own children to name their own favourite Superheroes to play with.  They named Batman, Spiderman, Superman and Wonder Woman and all agreed that there should be more female superhero characters available.  I admit our dressing up box is mainly made up of male superheroes, although these are always mixed and matched and used to create their own new superhero characters anyway. 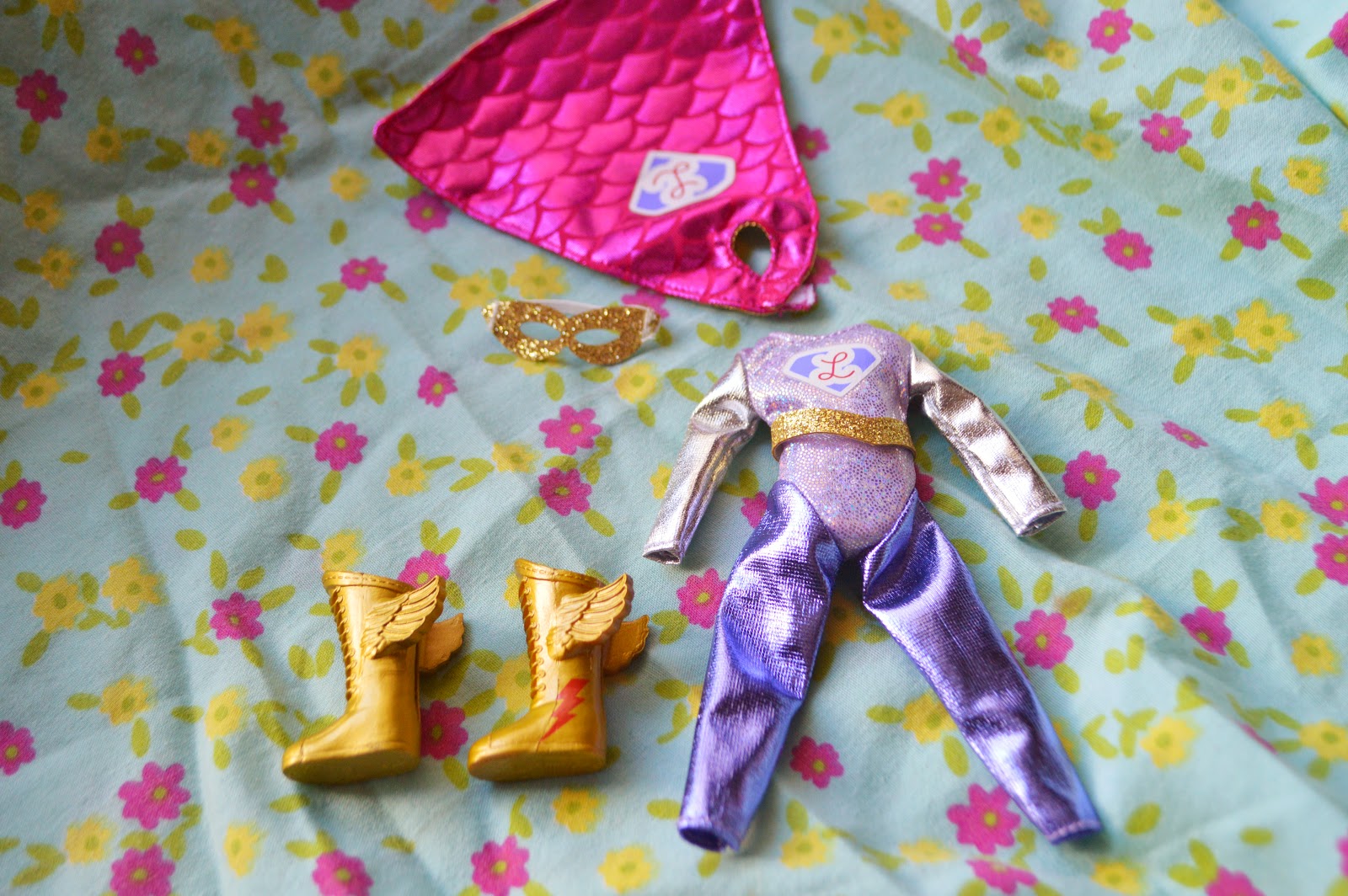 We couldn’t wait to dress our Lottie in this new outfit. 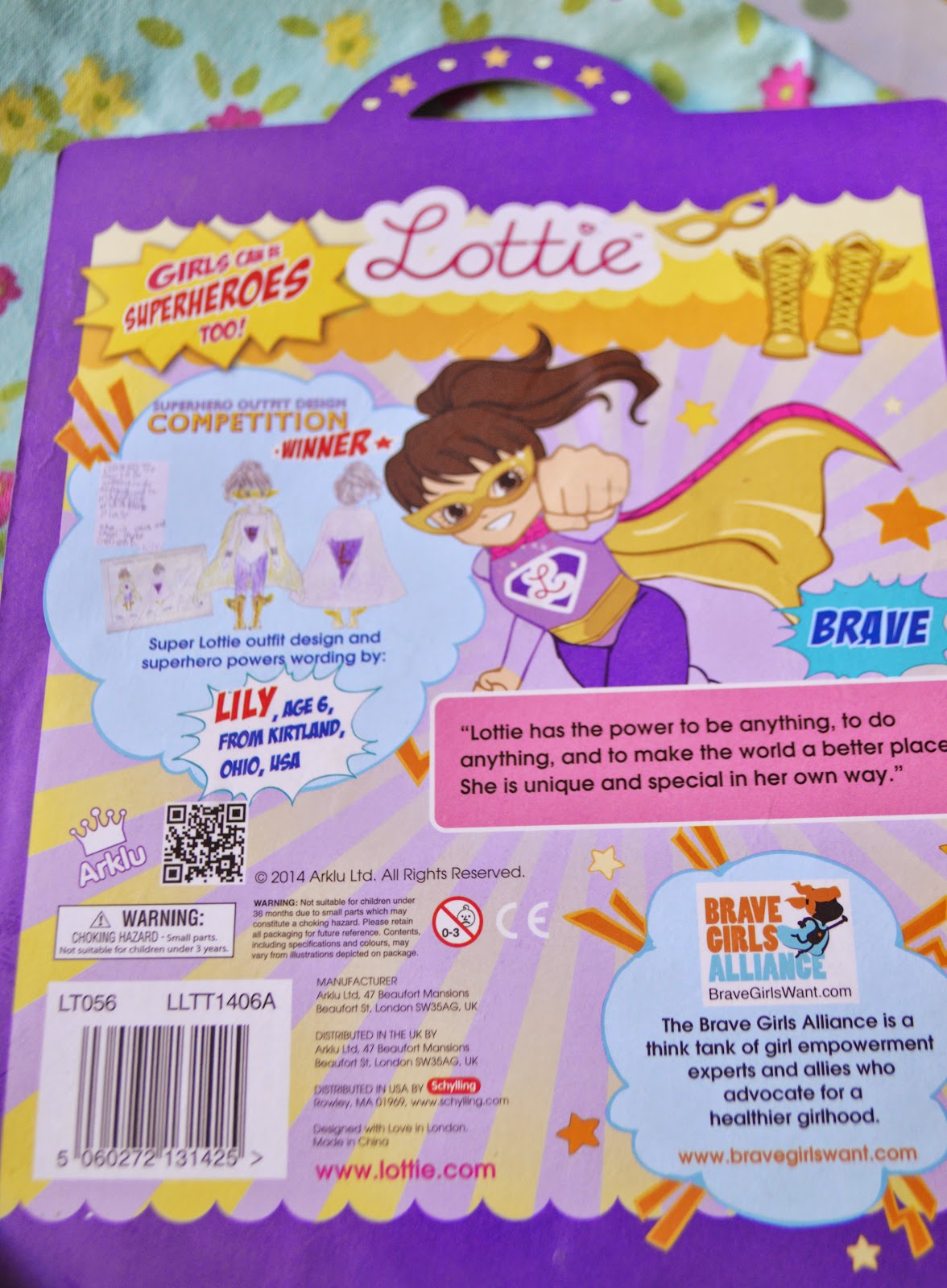 From Butterfly Protector to Superhero! 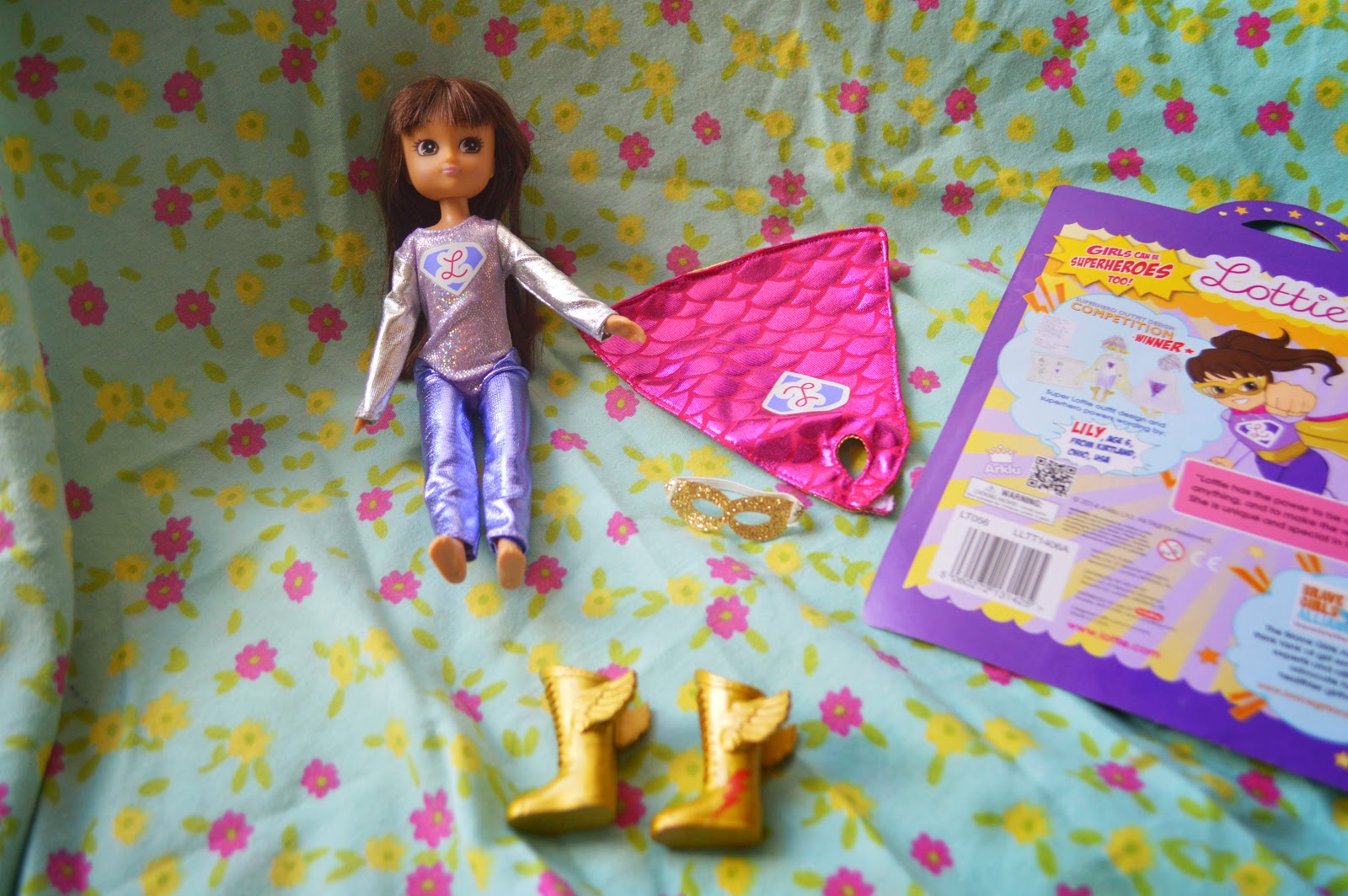 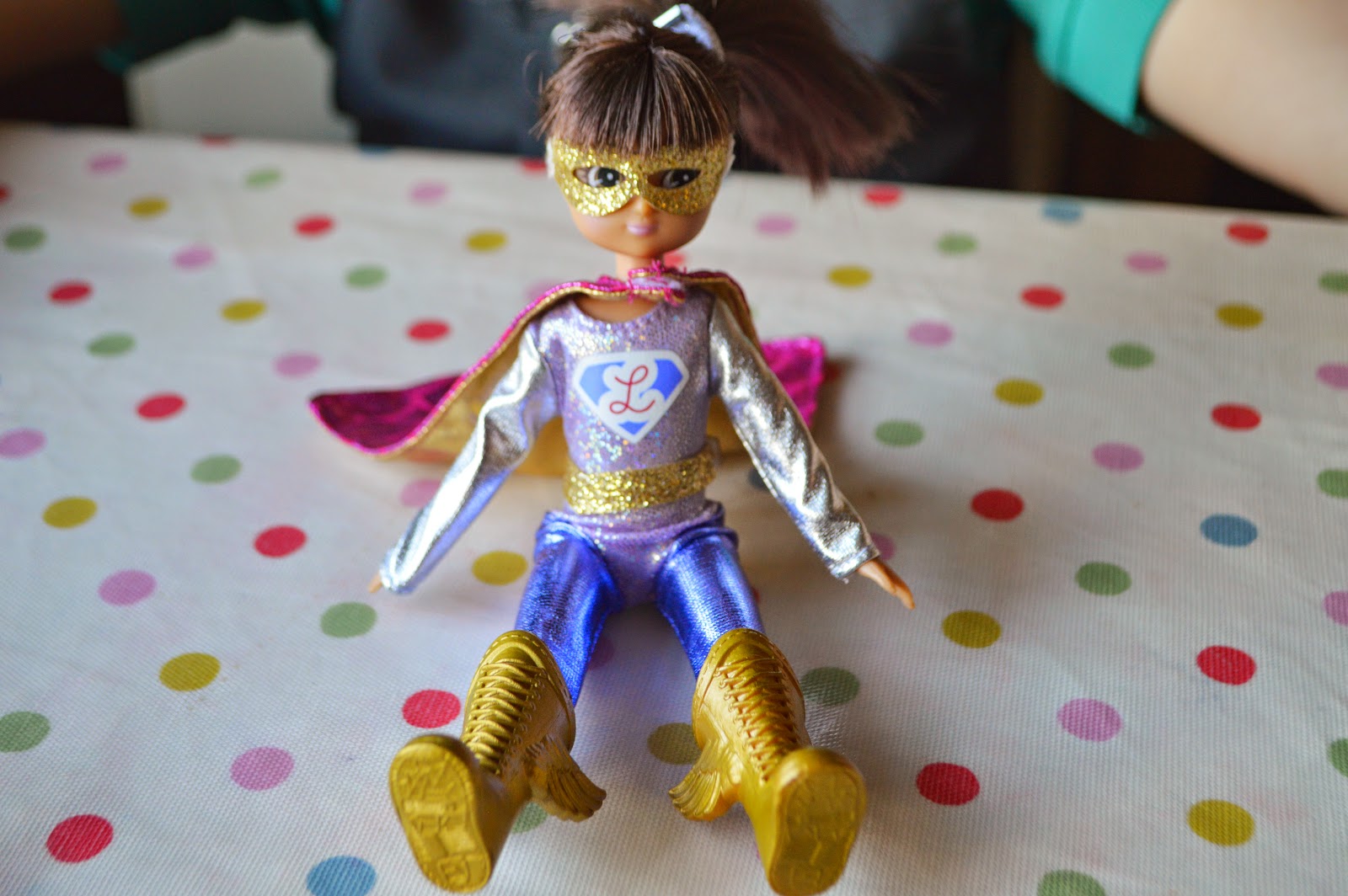 Girls can be superheroes too! 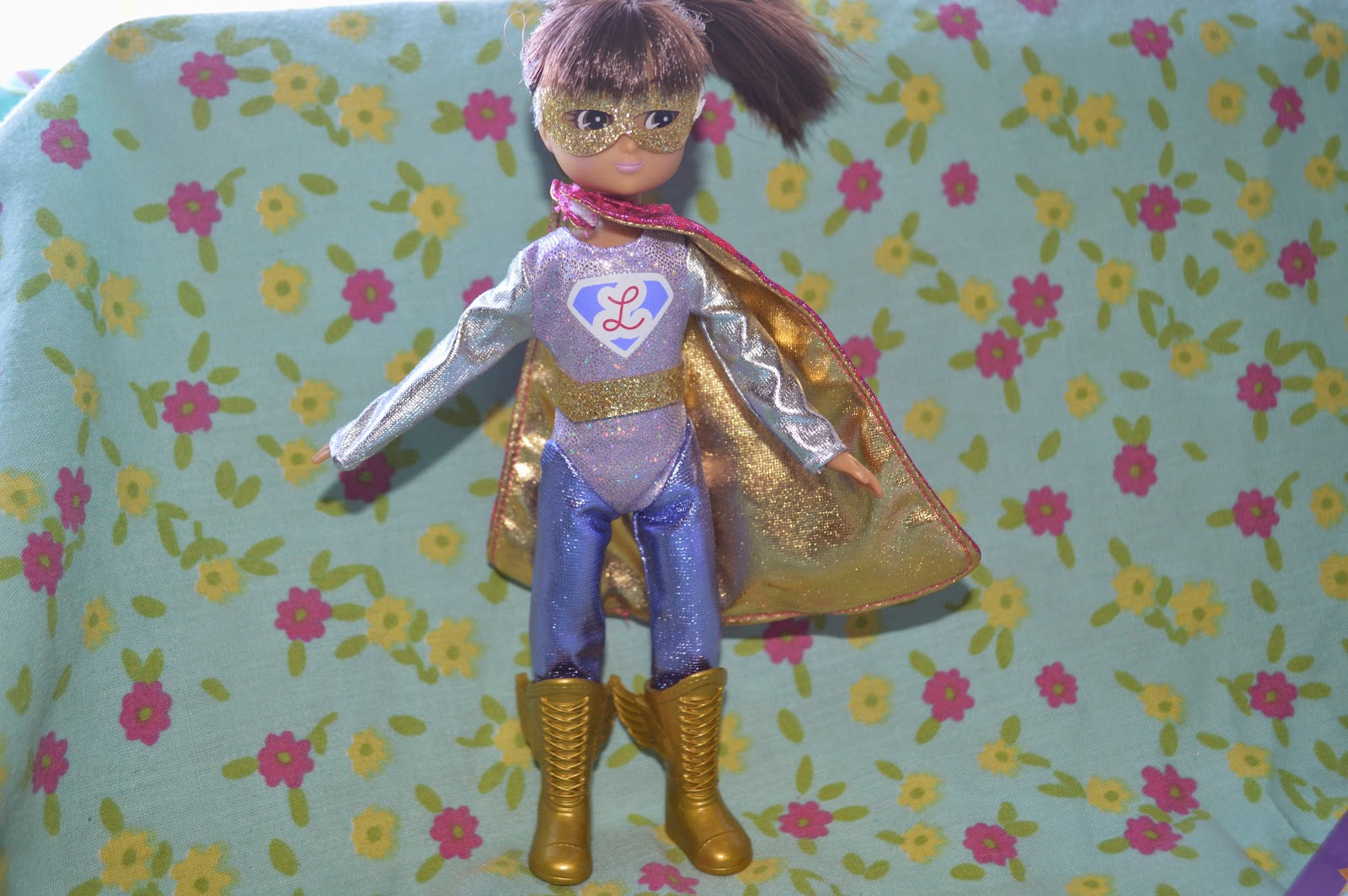 Lottie dolls became the first fashion dolls to display childlike characteristics; a healthy childlike body shape, childlike clothing (no make-up, high heels, tattoos, etc) and wholesome activities.  In 2014, Arklu took things a step further by introducing a range of dolls exploring gender empowering, adventurous themes. Lottie dolls can also stand on their own two feet, just as we encourage our own children to. 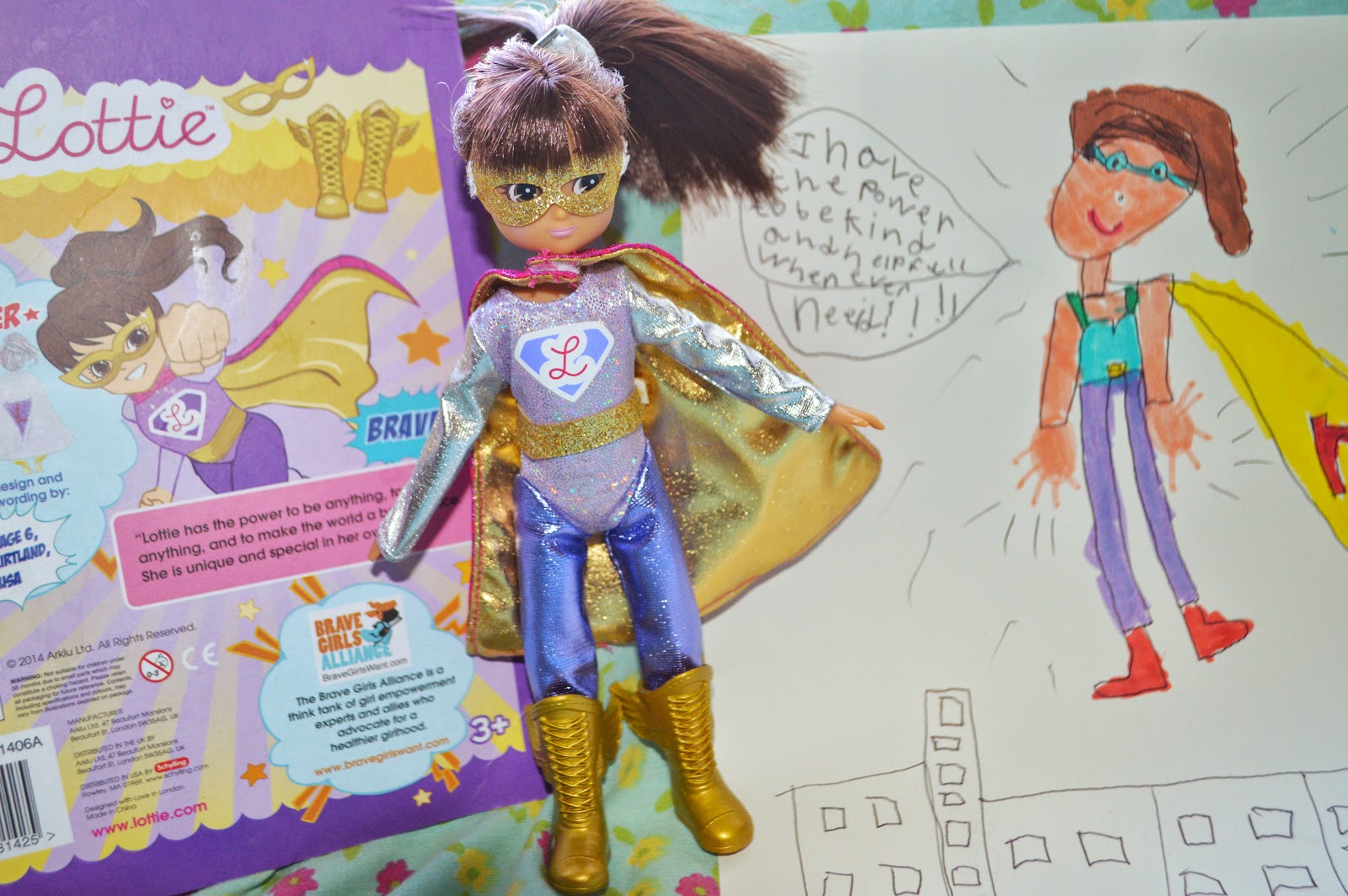 Commenting on the winning design, Lucie Follett, Creative Director at Arklu, says: “It’s great to see how the Lottie message ‘Be Bold, Be Brave, Be You’ has been listened to and interpreted by kids all over the world. Girls WILL be superheroes in 2014!”

Nancy Gruver of Brave Girls Alliance says: “All of the entries showed the strong voices and powerful ambitions girls have, and we are very excited to see the awesome winning outfit available to purchase globally!”

Lily’s mother, Greta, continues: “Lily loves superheroes and art! She likes to play superheroes at recess… usually with the boys because the other girls won’t. We’re excited to see the reaction by other girls to Lily’s creation and hope that it brings great fun and enjoyment, as well as open their minds to the world of superpowers”. 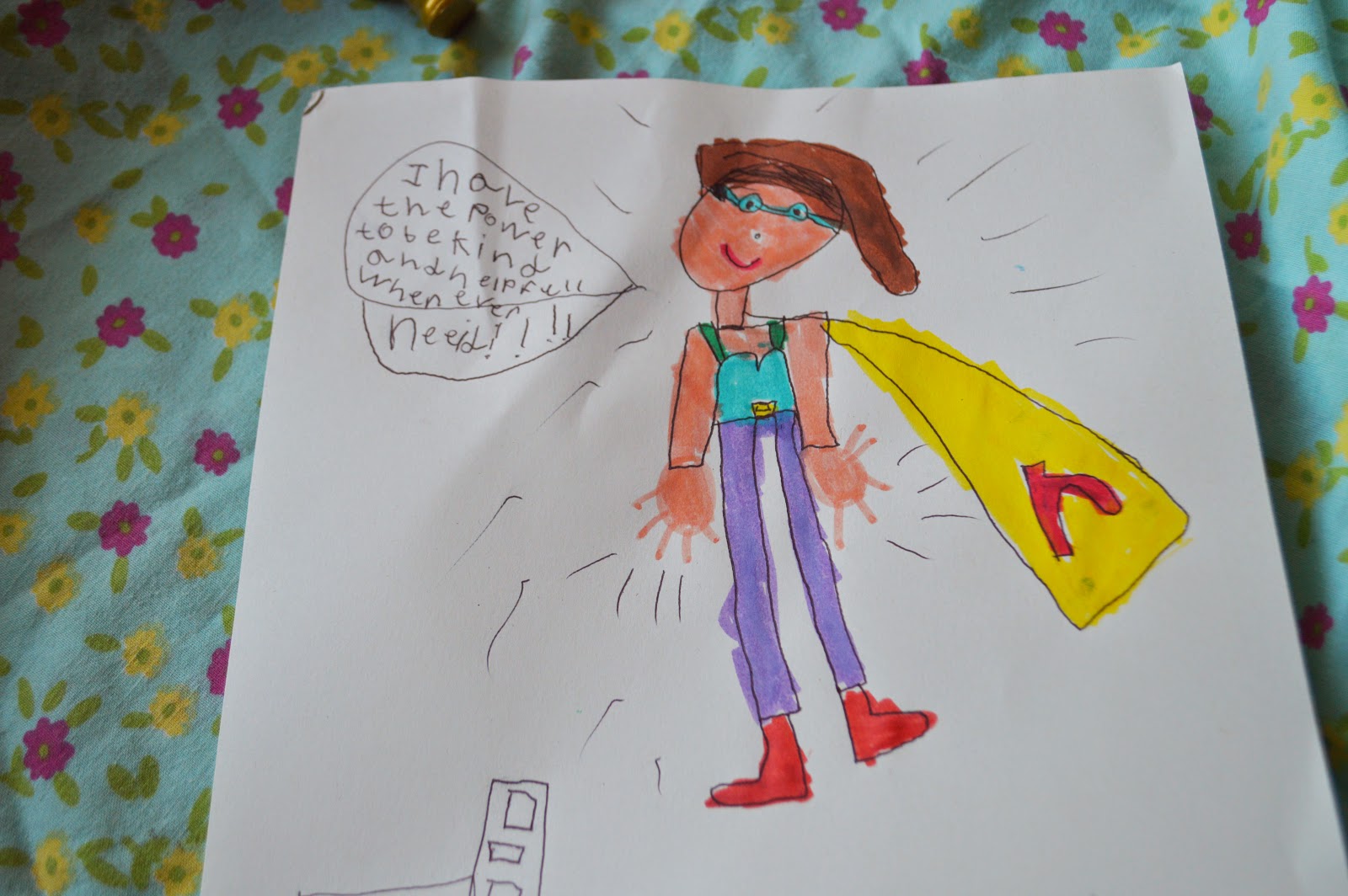 Rebecca decided to draw herself as a Superhero with her very own “R for Rebecca” Superhero Cloak.  Her superpower is to “Be kind and helpful whenever needed.”  This sums up Rebecca very well and being kind and helpful can be very powerful traits. 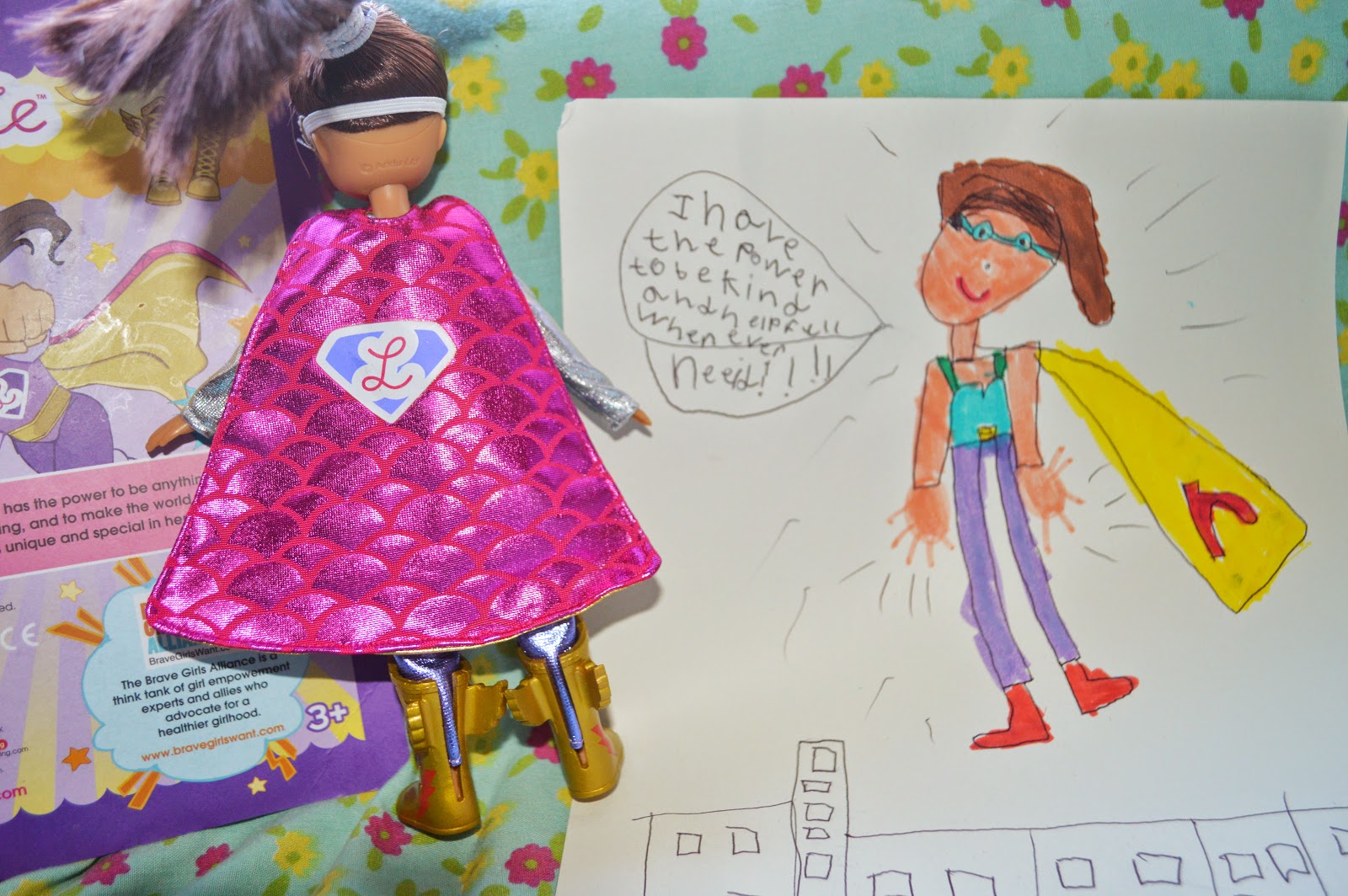 Welcome Super Lottie- the World can never have too many superheroes!

“On this International Day of the Girl Child, I call on all governments to take action to end all forms of violence against girls in all parts of the world. Together, we must create a world where violence against women and girls is never tolerated and girls are always empowered to reach their full potential. “