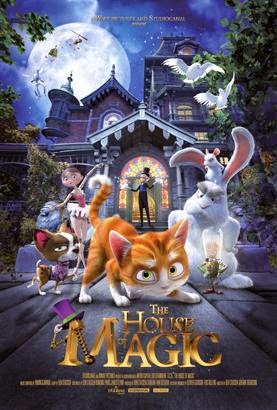 IN CINEMAS FROM 25TH JULY

We’re looking forward to viewing The House of Magic. It looks so magical. The film is full of fun characters which will keep my younger girls entertained but also dark and spooky enough to keep Danny interested! I love films which please the whole family!

The House of Magic, the must-see family adventure in eye-popping 3D from the creators of A Turtles Tale: Sammy’s Adventures and Sammy’s Great Escape, is released in cinemas nationwide from 25th July 2014. Prepare to be enchanted by The House of Magic this summer!

Seeking shelter from a storm, abandoned young cat Thunder sneaks into a mysterious mansion owned by retired magician Lawrence, aka “The Illustrious Lorenzo”.

Lawrence shares his fairy-tale world with many animals and a dazzling array of automatons and gizmos capable of whipping up breakfast while rolling out a spectacular song-and-dance routine.

He soon makes Thunder feel welcome, but Jack the rabbit and Maggie the mouse start plotting to get him kicked out. When Lawrence ends up in the hospital, his nephew tries to trick him into selling the house. But its ragtag inhabitants develop a spooky strategy to defend their home. They turn their house into a haunted mansion, using Thunder as their secret weapon…

Join Thunder and his friends when you visit The House of Magic,

For a sneak peek, you can view the trailer here!

Stay tuned for a great competition and free printables launching on this blog on July 25th to celebrate the release of this new film!