We were so excited to be asked back to Warner Brother Studio Tours to review their new attraction, Feathers and Flights.

With a wave of our wands (OK and also a drive on the M4 and M25!) we were there to enjoy this special event.

Warner Brother Studios is very easy to find.  Driving from the South West, we left the M25 at J19 and followed the Brown “Warner Bros Studio Tour” Signs.

Once we arrived, friendly staff directed us to the free parking.

You must pre-book to visit the attraction. Tickets can be bought here.

Make sure you arrive on time for your allotted tour.  We always get there early and pass the time by picking up our Passports and taking in all the sights around us.  There is also a cafe as well as a shop and toilets in the entrance foyer.

As this was a VIP event we were also treated to drinks.  This was a nice welcome after a long journey.  It was a shame I had to drive back to the hotel though, so had to stick to the juice.

Sitting on the bench sipping our drinks, we felt like we were waiting for the Hogwarts Express to whisk us off to our own school of magic!

When it is time to queue for your tour, as you are are literally still in the Muggle World, it is fitting that the first display you see is “The Cupboard Under The Stairs” also known as Harry’s bedroom in his home on Privet Drive.

From the start, the friendly staff interacted with the kids and told them lots of behind the scene secrets.

Despite there being lots to see and keep us amused, we were still pleased when it was time for our tour to begin!

We were led into the screen room for our welcome and introduction. 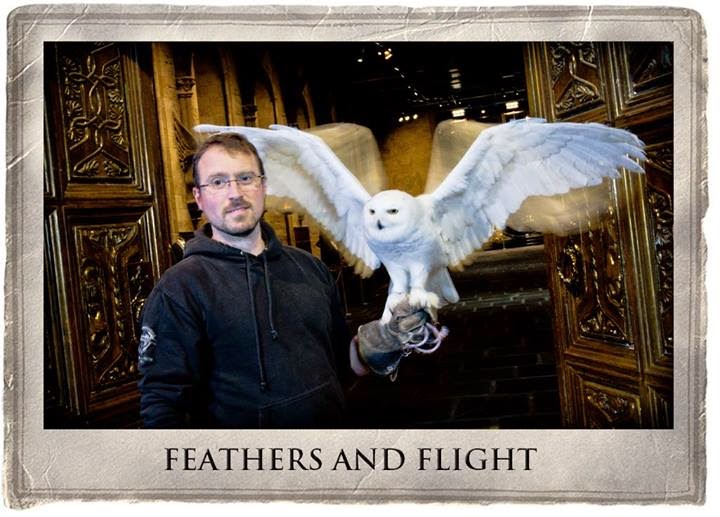 After this we went into the “Cinema” for a Question and Answer Session with the Animal Trainers, including head trainer, Julie Tottman. 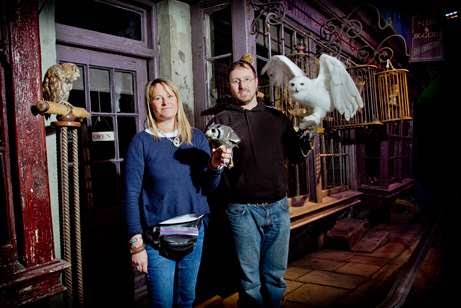 This was really interesting.  We heard how owls actually take a long time to learn new skill– they can take up to three months to learn what a raven or crow can learn in just one week. 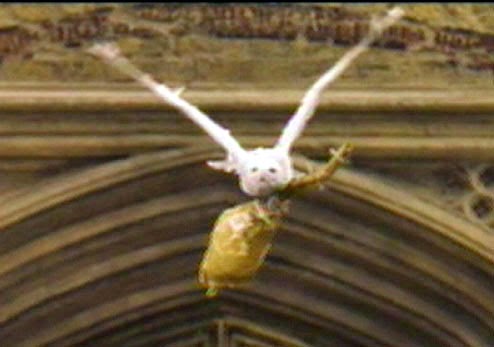 I was very impressed to find out that in the infamous scene where Harry’s owl,  Hedwig delivers the Nimbus 2000 Broomstick to Harry – the owl actor really did carry the broom stick as he flew in through the window.  The trickery came from the prop rather than CGI department- a specially made “light” (as a feather?) broom stick was used.

We also watched a video especially made for Flights and Feathers showing how the owls are trained to carry objects and we also got to see the “owl’s  eye view” as he flew across the Great Hall after he had been trained to carry a camera.  Amazing!

During the Q and A session, Danny’s question was “What happens if during filming none of the animals will do what they are told?” (I could have asked a similar question regarding children!).  The trainers explained that because all the conditions are correct and the animals are happy, then they are always happy to take part.  There are always three animal actors to portray each character so they can pick the most suited animal for the scene.  Julie explained that while training is the harder part of their job, filming is fun for the animals.

We then watched the special Harry Potter film which always precedes the tour-and gives me goosebumps!

For this special Feathers and Flight feature, the Great Hall set is decorated ready for owl post delivery scenes.  The food looks so real-I did wonder for one moment if we were all going to sit down and breakfast together!  There were racks of toasts, boiled eggs, jugs of juice and of course, every Wizard’s favourite Cereal “Cheeri Owls”.

The specially made broomsticks and letters were also on display, as well as permanent displays showing the House Crests and Uniforms.

Here is the uniform which I would be wearing (Gryffindor!).

The girls sat at one of the long tables and pondered what everyday life would be like at Hogwarts.

Danny certainly feasted as well as Harry and Ron usually do.

Here is the costume worn by one of my favourite characters, Hagrid.  He is definitely my favourite “voice” to do whilst reading aloud from the books.  This actual costume was worn by Robbie Coltrane’s Body Double, retired rugby player and now TV presenter, Martin Bayfield, who despite being 6’10” tall, still needed to wear stilts to make him appear as tall as the half-giant, Hagrid.

The Professor’s costumes are shown at the top of The Great Hall.  My kids often tell me that I look like Severus Snape- thanks kids!

I was pleased to see that Gryffindor were in the lead once again for house points!

Our guide shows us the actual broom stick that was carried in by our feathered friend.

Once our talk in The Great Hall was over, I would have liked to have taken more photos.  However, the kids were eager to move on and there was certainly a lot more that we needed to see in The Big Room!

Caitlyn gets her Passport Stamped!

Danny has a play with “forced perspective” techniques.

I love the ramshackle Weasley’s home, The Burrow.  We get to see the magical secrets of how Mrs Weasley copes with her lively, large family.

The Enchanted Clock that every head of household needs, how useful it would be to keep track of all family members at once- although very worrying when all hands point to “In Mortal peril” as they once did in during the Second Wizarding War.

Ever wondered how Molly Weasely has the time to churn out all those lovely homemade knitted Christmas jumpers?  Enchanted needles of course!

No more burnt on pan washing up horrors with a self stirring pot!

We also spotted more Cheeri Owls Cereal! There was also an enchanted iron, enchanted knife to chop the veg and a washing up brush.

Professor Umbridge’s rather pink, palatial office at The Ministry of Magic.

The snake door to the Chamber of Secrets- this does something quite special!

You can also see the Griffindor Dormitory, Common Room, Albus Dumbledore’s Office, The Mirror of Erised and  so much more.

The girls took a turn on the flying car (they look suprisingly calm!)

Whilst we each had a turn flying on a broom stick.  Of course, we were really on a broomstick but the scenery behind us may have been Green Screen (big secret reveal there!).

We then went outside to the Back Lot, home to the outdoor sets as well as a picnic area and food vans.

It was very atmospheric seeing the Knight Bus and Covered Wooden Bridge in the dark.

We enjoyed some Butterbeer.

Seeing Number 4 Privet Drive in the dark bought me back to  that night in 1981 when Dumbledore first bought baby Harry to live with the Dursleys.  I would not have been suprised to have glimpsed a cat with a map.

Instead, however, we did see Harry’s lovely Snowy Owl Hedwig.  She is actually played by a “He” called Elmo.   Make sure you take a #hedwigselfie here!

I first met Elmo at Brit Mums, where the queue to meet him was longer than the queue for the bar.  That shows how popular he was!

We posed on Hagrid’s Motorbike. 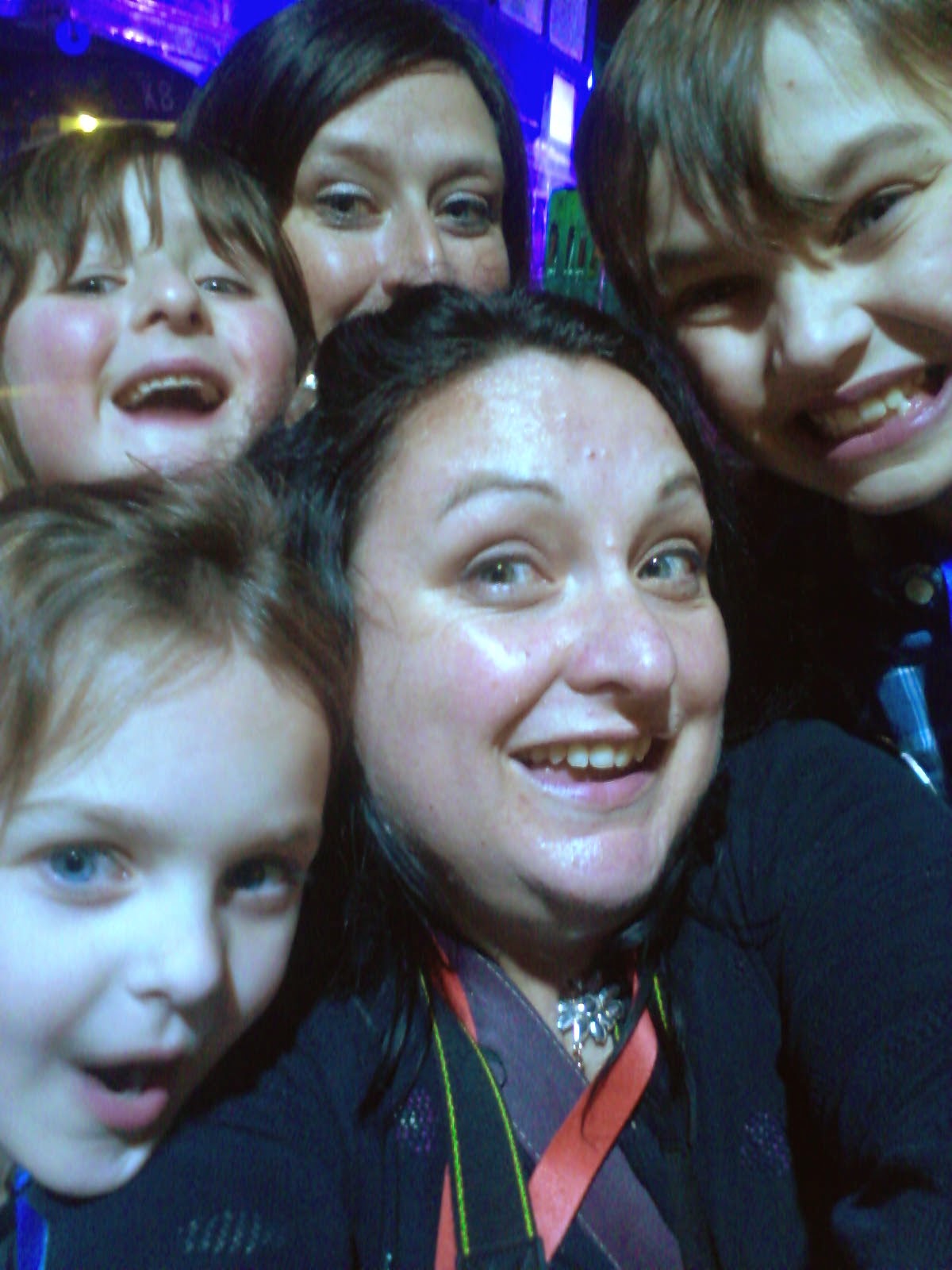 We stuck up our Wands to catch the Knight Bus!

The Dursleys were thankfully not at home.

We then walked to Godric’s Hollow to see Potter Cottage, which is invisible to Muggles.

We walked along the Wooden Bridge.  Instead of taking us into Hogwarts, it led us to The Creature Effects area.

Here, Hair and Feather Supervior, Val Jones id demonstrating technoques that made winged wonders such as Buckbeak the Hippogriff and Fawkes the Phoenix a reality on screen.  The secret to creating the Hippogriff’s realitic feathery coat was individually inserting thousands of feathers.

I was mesmorised as every by the creepy yet strangely cute baby Voldemort.

I always tend to rush the Creature Effects part a bit too quickly as I am excited to walk down Diagon Alley.

For Feathers and Flight, Diagon Alley is enhanced with the pleasure of the company of more talented owls.

I think the owl shown on the right is Ron’s first owl Pigwidgeon, a tiny White Faced Scops Owl.

Danny loves talking to all the tour staff.  He learns lots from them and tells them a few facts too!

This is Erroll, the Weasley’s clumsy family owl.   He is a Great Grey Owl and has super sensitive hearing.

Next we walked through the Art Department.

We were then in the breathtaking model room, taking in the sights of the 360˚ view of the incredible, hand sculpted 1:24 scale construction of Hogwarts.  Yep, it’s pretty spectacular.

The music and the lighting really adds to the ambience too.

We then walked through the wand room.  What would have been the inside of Ollivander’s Wand Shop is now the tribute room of every member of cast and crew who have worked on the Harry Potter films.

There are over 3000 personalised wand boxes.  In my photo, you can see Daniel Radcliffe’s very own wand box.  If you want to see somebody’s in particular then do ask and they will help you find it.

Lastly, we entered the shop.  The shop is amazing and every Harry Potter fan’s dream!  Yes, it is on the expensive side, but you will be buying desirable, collectable items so try to save up before you visit!

I always pick up a box of Every Flavour beans.  They last ages and keep the kids entertained for hours!

We picked up our photos from Customer Services in the Lobby.  We were also given wonderful Gift Bags and then, sadly, it was time to go home.

We stayed at Travelodge Watford Central Hotel, which is just 3.5 miles from the attraction.  Rooms start at £54.

Back at the hotel, we enjoyed looking through our Goody bags.  We all had a Golden Snitch and Feather Quill Pen.

I was given my very own Hedwig Backpack.  It is so cute and fluffy!

Inside the Snowy owl was a huge Chocolate Frog.

We then had fun playing with our Every Flavour Beans- Danny loves making us try the vomit flavoured ones-yuck!

Most of the flavours are nice though- I promise!

Warner Brothers Studio Tour is worthwhile visiting all year around, having if you want to learn lots more about the feathered friends who are the real stars of the show, then make sure you get down to this Feathers and Flight Attraction, which will run until Sunday 27th April.

Thanks for a lovely visit- we’ll be back soon!