At the weekend we attended the Open Day for Little Hearts Matter, a charity who support families of children who like Danny have a heart condition such as Hypoplastic Left Heart Syndrome.

We had to travel straight up to Birmingham on the Saturday as Dave had a gig the night before.  This meant, we arrived after a very early get up and a long journey!  Despite the early start we still managed to arrive late, but better late than never!

We signed the kids into their sessions.  Rebecca was in with the 5-10 year olds and Danny with the 10 -13 Youth Groups.  Isabelle is still poorly, with a rash, temperature and generally feeling niggly, so Caitlyn and Izzy went to stay for a Granny and Grampy sleepover instead.

I was so tired on arrival, you know when you can barely keep your eyes open, and my enthusiasm for meeting old friends and new disappeared.  However, I didn’t want to waste this opportunity as sometimes the Open Day is the only day of the year to meet these “heart” friends  who we have so much in common with in real life.  So, I took it easy on myself during the rest of the morning, so I’d have a more productive afternoon.

I will try to write about each of the sessions in more detail in another post, however the first one that we made it to was “The Fontan Panel” a session about life after the Fontan procedure, which was Danny’s last operation.  It was lovely to see William Brawn (Danny’s Heart Surgeon) and Dr Oliver Stumper, (Danny’s Cardiologist at Birmingham Children’s Hospital) on the panel.  I have huge respect for these gentlemen and can never thank them enough for all they have done for Danny.

I admit that I had tears in my eyes as two young adults with HLHS, who I have seen on and off over the ten years we have been attending Open Days were also on the panel.  It was such an inspiration when Danny was a poorly baby, to see these as ten year old children doing well and now to see them as University Students was just amazing.  I wish Danny was in this session to hear some of the things they said.

We then heard about the use of Cardiac MRI Scans before going off for dinner.  As Danny was now in the older group, he stayed with them for dinner.  We collected Rebecca, checked Danny was happy (he was!) and went for our buffet lunch.


It was very busy and I was really grateful that Dave went up to pick my lunch for me while I stayed with Rebecca so I could avoid the queue!  We had lovely food and a cuppa, returned Rebecca to her group and then had some spare time to browse the information fairs.

After dinner we split up into small groups for workshops.  I find these the most useful and the time when I come to life and begin to chat with other families.  We had chosen the “Behaviour” sessions as this is the aspect that we most find difficult- Danny’s moods and frustrations when tired.  It just felt good to be in a room of other parents in the same situation who understood us.


As the Open Day took place at Villa Park, home to Aston Villa  Football Club we were allowed to go on a mini tour of the stadium.  Although we don’t watch football at home I thought it was a great opportunity and jumped at the chance.  Danny and Rebecca, however wanted to go play outside in the park, so Dave took them over there instead.

This statue is of William McGregor, the founder of the Football League in 1888.  Originally teams would get two points for a win, but since 1981 they get three points as it is thought to encourage both teams.  In 1885, the FA  had accepted Professionalism, however each club was permitted only to pay players who had been born or lived for at least two years within six miles of its home stadium.

We walked through the Players Car park, which is filled with Sports Cars on match Days.  The home team drive themselves here and the away team arrive on their club coach.   The van you can see in the photo is delivering Stoke’s Team Shirts ready for the Aston Villa v Stoke game that was played on Sunday.

Here are the shirts arriving.  I bet mums are excited when their sons go professional so they no longer have to do the team washing!

This is Aston Villa’s Changing Room.  I have been in quite a few Professional team’s changing rooms and they all look the same to me.  I’ve also been to Cardiff Millennium Stadium (rugby), Old Trafford and Camp Nou (home to FC Barcelona).  As I said, I’m not a huge football fan but these trips have just occurred while I’ve been sightseeing or on school trips as a teacher.  Somehow, I find what happens behind the scenes more interesting than what happens ont the football pitch.


A safe lies behind every Football Shirt.

Our guide told us how when the team arrive absolutely everything is laid out for them ready to wear to play.

I don’t know any names of Aston Villa Players, so I just took a photo of the nearest shirt to me!  I’m sure Vlaar is very good! (I couldn’t resist Googling him:  Ron Vlaar is a Dutch player, aged 29, he has two sons, plays Centre back and is Club Captain.)

At every stadium tour you always get to recreate that epic moment the players walk throught the tunnel and onto the pitch.  Although we didn’t have the deafening cheers and we weren’t allowed on (or even to touch) the precious pitch of course.

This part would have been a lot more fun if I’d had the kids or even a friend with me.  I did feel a bit of a wally walking out and waving to the invisible crowd on my own, but it was all good fun.

The football fans amongst us were discussing the quality of the pitch and technical things about the way it curves and drainage, while I was thinking to myself, “Ooh, there’s a rainbow!”

This is one of the interview rooms.   Aston Villa also have their own TV Channel.

The Manager’s Office.  Some of the tours had a nose in here but we didn’t get to as I think we were running out of time.

Here is the visiting teams changing room.  Both teams then have to cross sides before they walk out on pitch, so Aston Villa are on the same side as the home fans and vice versa.

After the tour, I walked across the road to the play area to meet Dave, Danny and Rebecca.

We then went to get our dinner and attend the evening social.  It’s lovely to see all of the heart kids and siblings running around and playing together.


Look at the screens and you will see an old photo of Danny, Dave and myself from a previous LHM event!

There was lots of fun to be had with the Little Hearts Matter balloons.

…but as always, many were lost to the high ceilings!  Oh how we used to cry when we were kids at Butlins and our helium balloons rose up to the ceiling in the “French Ballroom”.

We enjoyed our food and drink (although I had major curry envy.  I could smell curry as that was the meat option, but had to have pesto pasta, the veggy option. In hindsight I wish I’d gone for just rice and a naan as the pasta tasted odd while my senses thought of curry!)

There was a Magic Show to entertain the kids.  Here Danny has been chosen to take part in a fun competition.

He didn’t win but was happy to have been “a chosen one”! 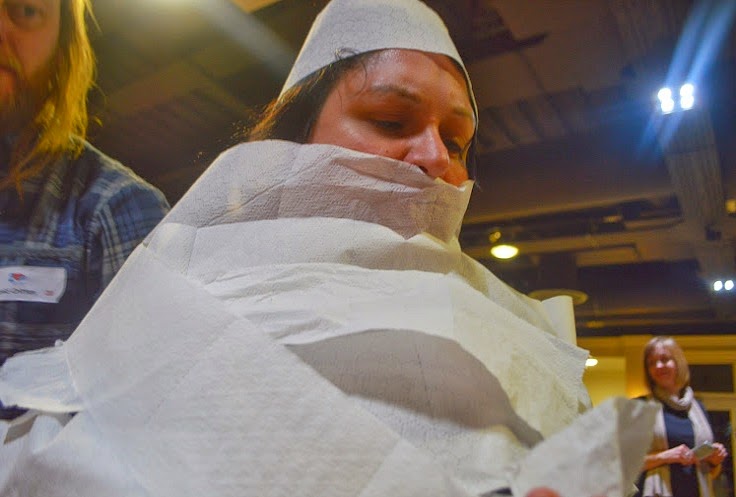 The kids were then asked to go and get their grown ups.  I hate things like this as I am so shy, but I always go, one to set an example to my kids about “having a go” and two just for my kids to make them happy.

The kids were then given a toilet roll and told to make the grown ups into scary Egyptian Mummies.  I joked that I was naturally a scary mummy.  This bit was not too bad and was quite fun as they played The Bangles “Walk Like An Egyptian” as they covered me in toilet roll.

Then the music changed to Right Said Fred’s “I’m Too Sexy”.  And, yep, you’ve guessed it, we each had to do a little Model’s run to this song dressed like Mummys.  Oh it was so embarassing but worse was still to come.  Once we’d all done that they had to choose a winner.  The winner was to be the Mummy who got the loudest cheer.  Now, I didn’t expect to win but I had hoped that my two favourite little people in the room would cheer for me but no they didn’t!  So that meant after some popular people getting huge rounds of applause from everyone, including me as I cheered and clapped for everyone, I had not one single person cheering for me.  Oh, I was so embarassed while also trying to smile and laugh and pretend I didn’t care (Ho ho ho, noone in the World likes me, but Hey Ho!).  The things we do for our children!

So, you may be wondering why didn’t they cheer for me?  Danny had stacked up the odds.  As other people had received huge cheers there was no chance of me winning so no reason to cheer (thanks, mate!)!  Rebecca, being quiet like me was too scared and embarassed to cheer!  Oh dear!  Anyway, finally that ordeal was over and I hurried back to my seat to hide!

At the social, the kids start really playing and talking to each other, and the adults relax and start discussing everything.  I had gone from the one extreme in the morning of not feeling up to talking to anyone to chatting to fellow parents like old friends and not having enough time to say all that I would have liked to!  Some years, when the event has taken place at the same hotel in which we stay we have just kept ordering bottles of wine and stayed up late chatting, but this year we needed to drive back to our hotel so we couldn’t stay too late (or drink wine!).

We said our goodbyes, exchanged e-mails and off we went to find our hotel.

The hotel, which was just ten minutes away, took hours to find.  Every local we asked for directions didn’t know where it was and we seemed to be in a GPS blackspot.  When we found it, we realised that we had driven past it lots of times!

Then our card was declined so I had visions of us sleeping in the car.  Thankfully, there was a cash machine there so we drew the cash out instead.

Rebecca made herself at home.

Dave took a short walk and bought us this bottle of wine for less than a fiver.  The same bottle of wine in hotel would have been £20.  Thank you, Dave!  (I did tell him, that he should have bought 4 bottles, but I doubt I would have appreciated them when driving home the next morning!).

It was finally time to relax and reflect on the long day.

Sadly there was no free wifi or blogging could have commenced then but sometimes it’s good to have a night off!

Thanks Little Hearts Matter for a lovely day!  We really hope to see lots of you before the next Open Day!