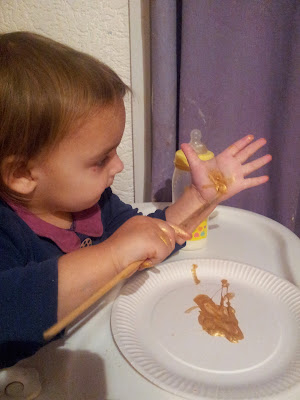 This week, Christmas in our house seems to mean chaos, paint and glitter.  We have been painting lanterns for the lantern parade; and writing and decorating our letters to Santa (yes, those curtains have been washed and dryed today!). 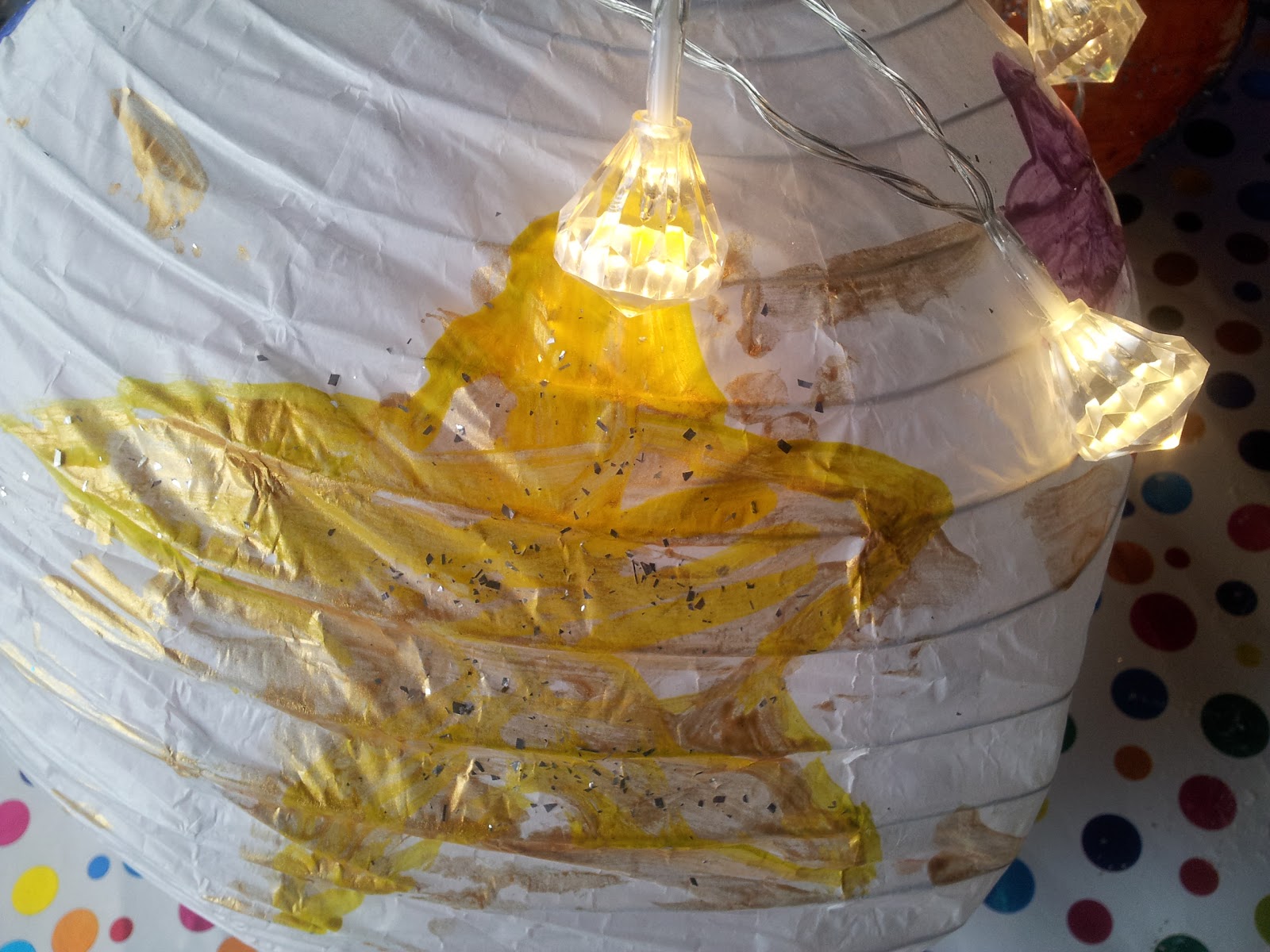 Izzy decorated stars with a hand print pattern for a simple but effective lantern. 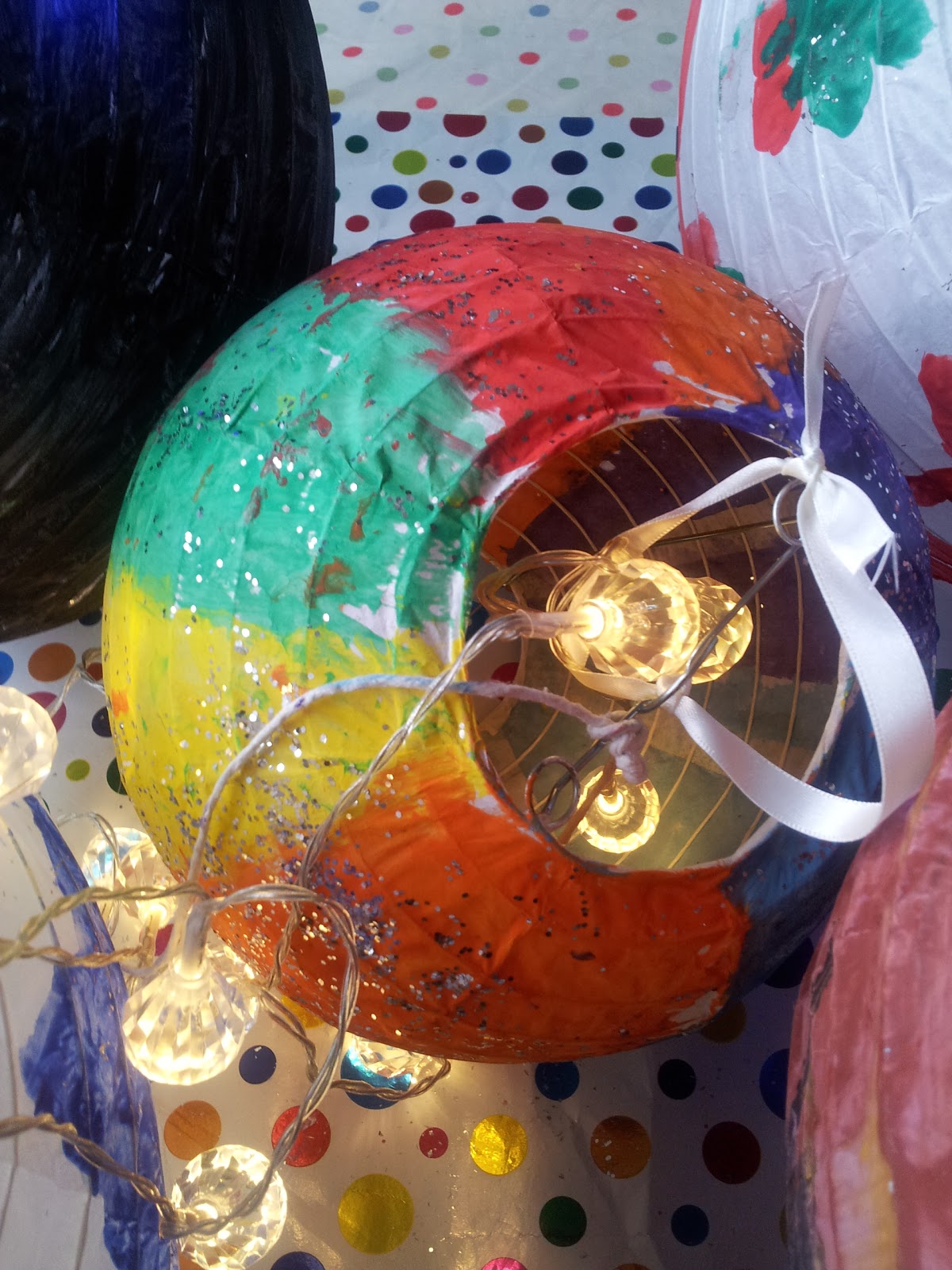 Rebecca painted this one in school.  Danny was in school but out of class on a Circuits course with me so he missed lantern painting, therefore we decided to all paint one at home too.

This photo Twinkles!  Thanks to Google Auto-Awesome.  Now I just need to work out how to get all my photos with lights in to Twinkle! 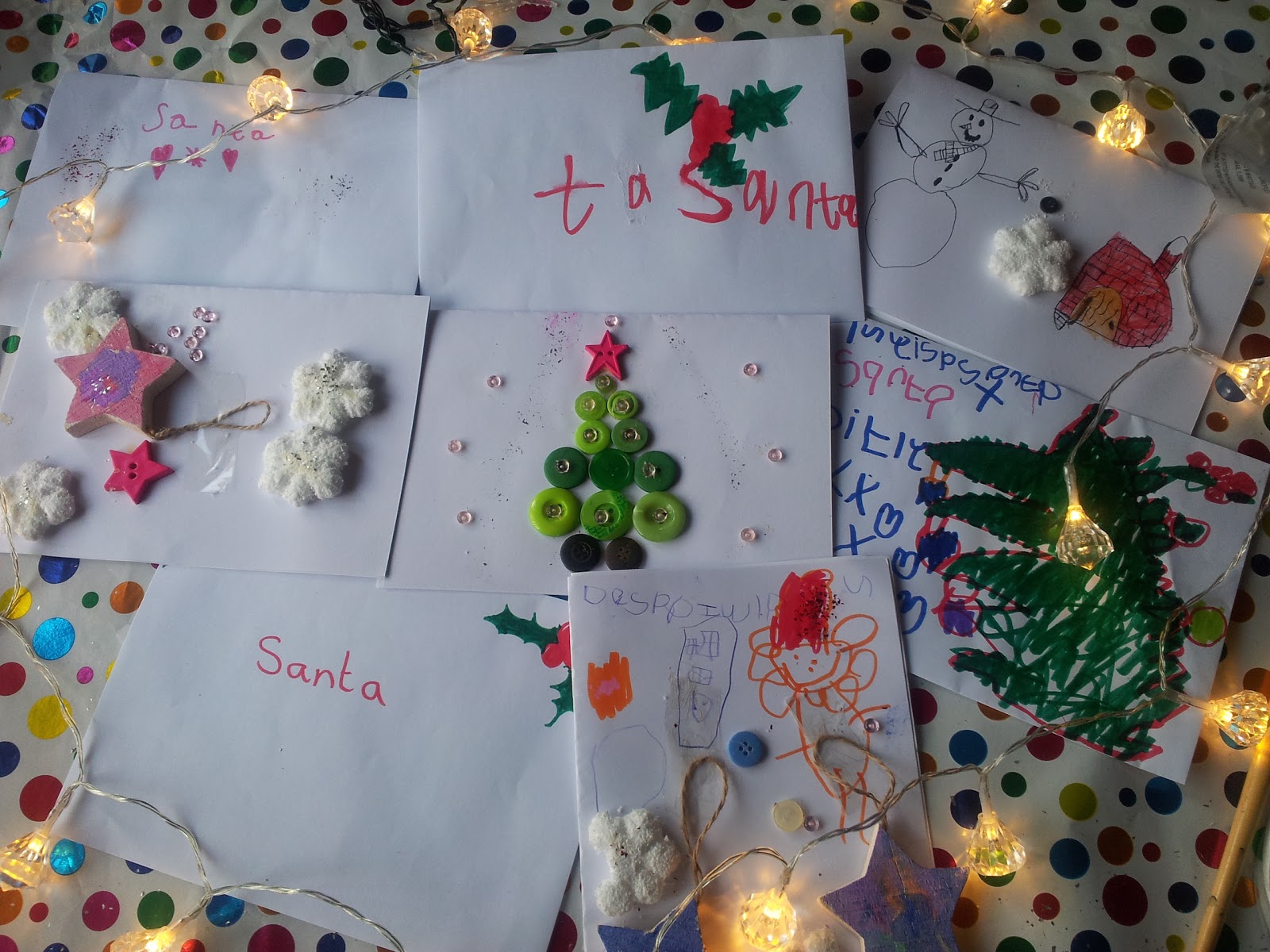 Our letters and envelopes to Santa.  I let them use bits and bobs from my Country Baskets Hamper. 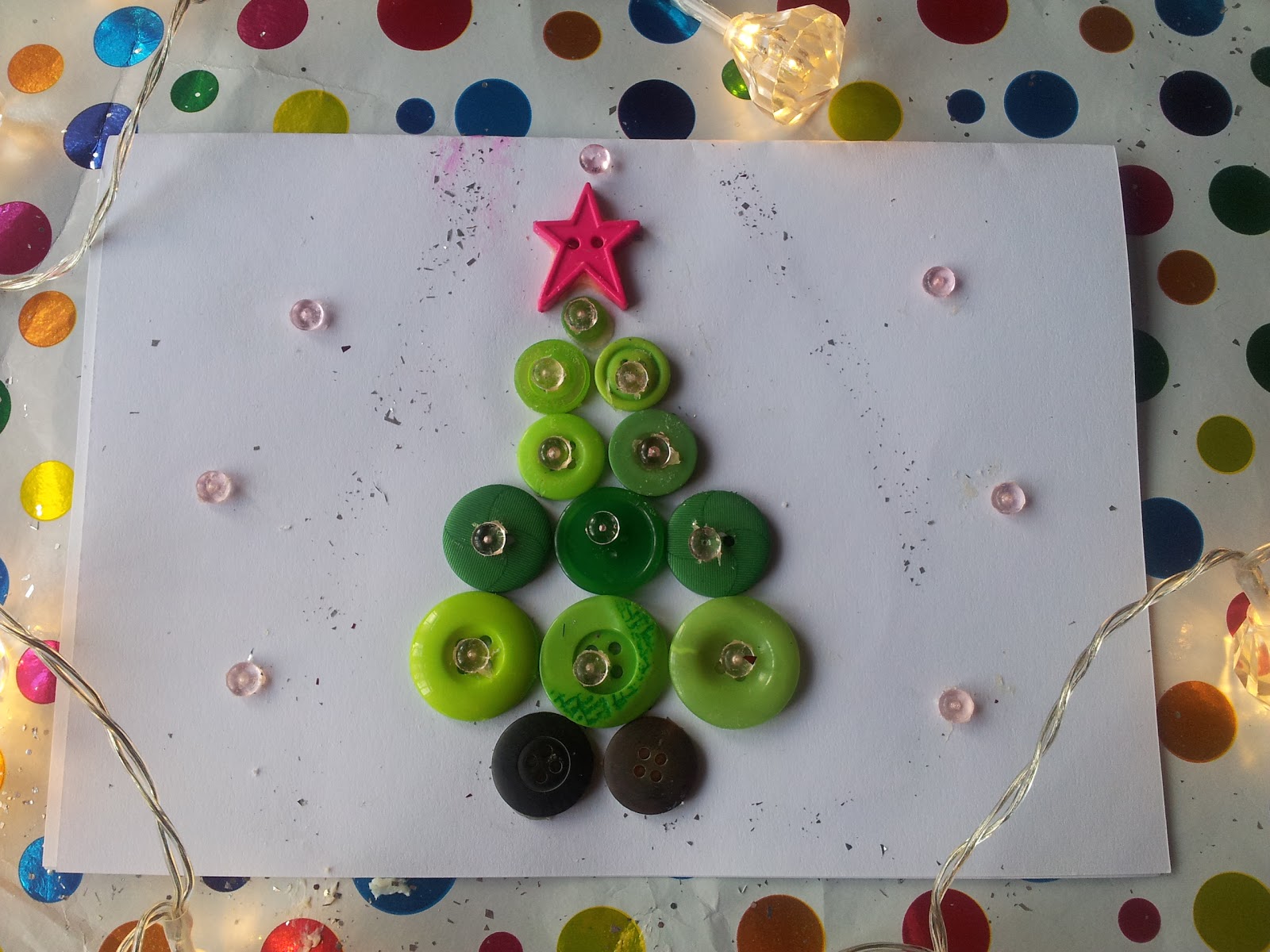 The green buttons made a lovely Christmas tree. 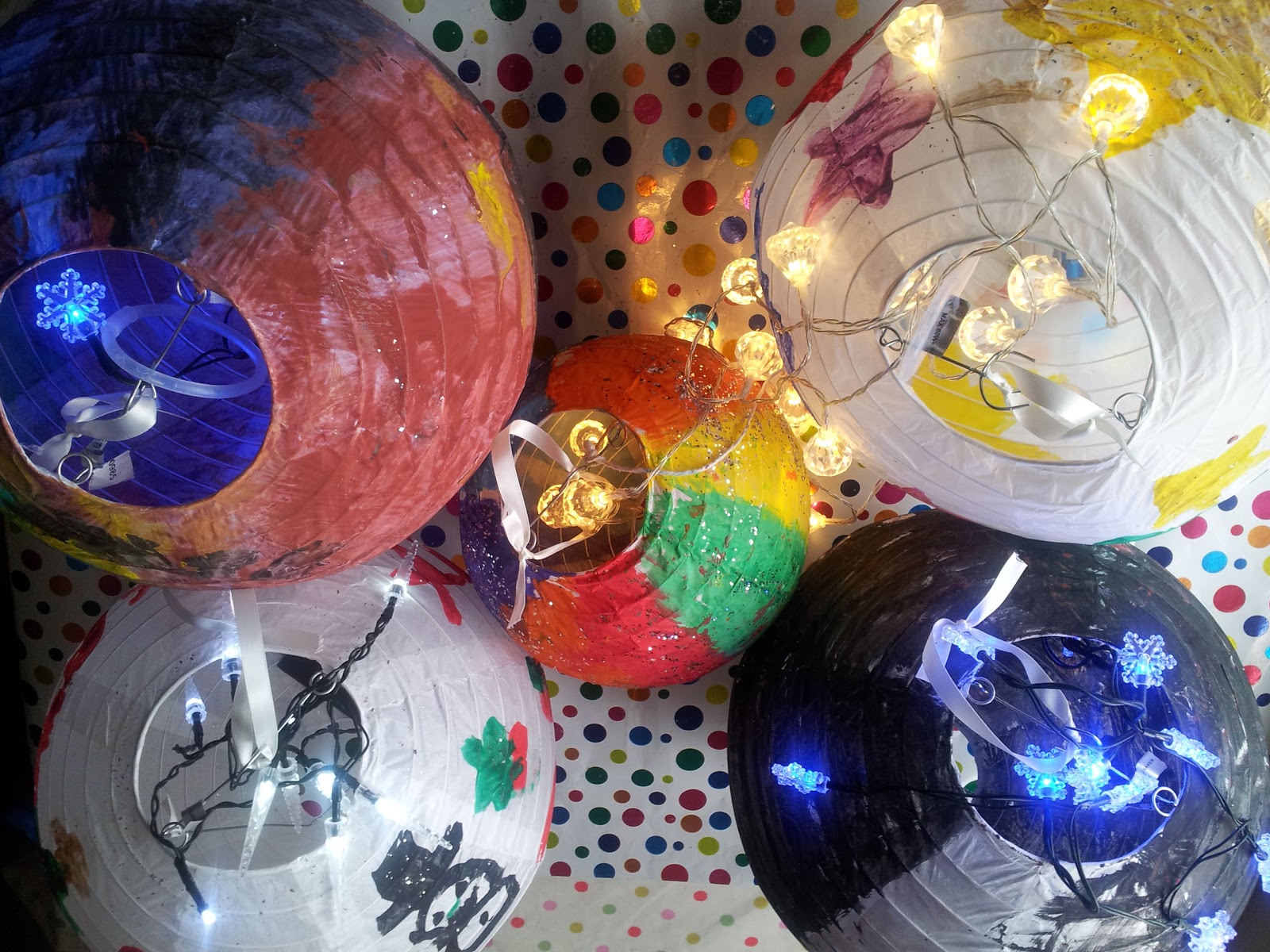 The finished lanterns.  Rebecca left her “Christmas Night Sky” Lantern (bottom right) at home as she already had her Rainbow Glitter one to carry (centre). 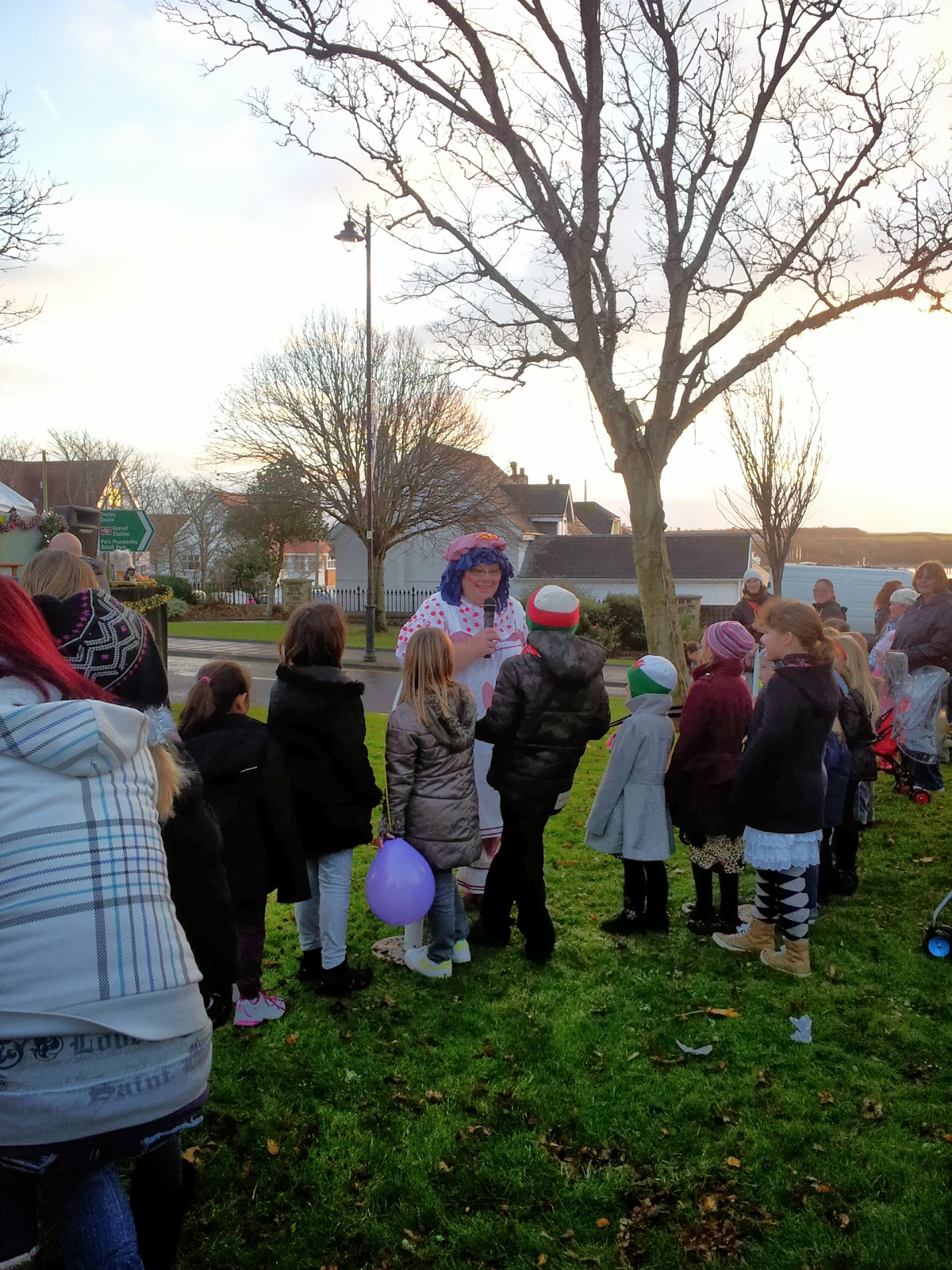 At the Lantern Parade, there was lots going on.  Free rides for children, free facepainting and a puppet show in the Memorial Gardens.  Caitlyn fell over in school last week and had lots of grazes on her face.  Therefore, we decided we had better give facepainting a miss this time while she heals.

We watched Cleddau Community Church put on a Puppet Show.  What a beautiful setting for a show.  They were so good at involving all the kids.  Here Danny is telling a joke.


“How do you make a sausage roll?

Push it down a hill!”

We clapped hands and enjoyed a sing and a dance as well as learning the meaning of Christmas.

Posting our letters to Santa 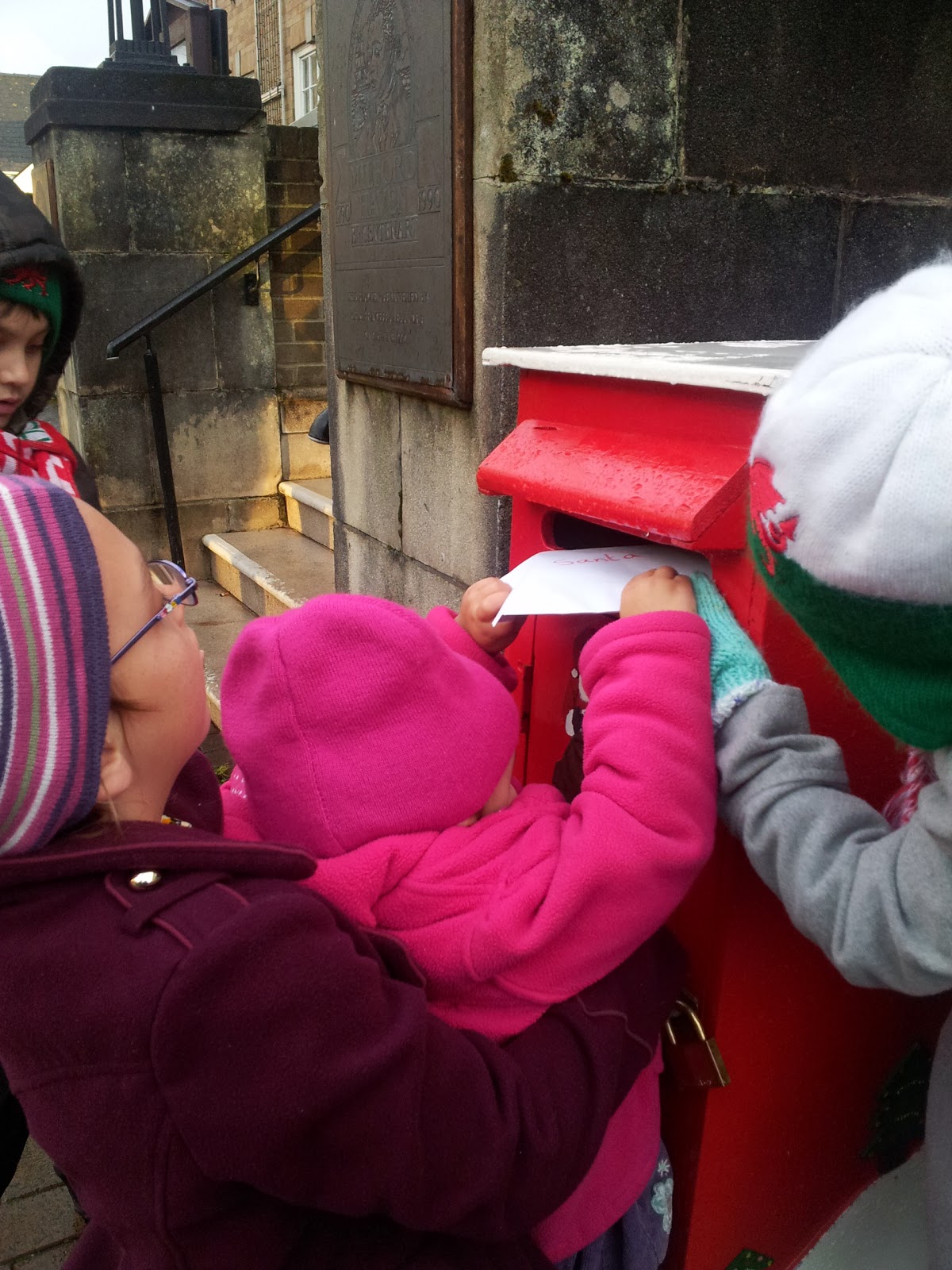 Then we posted our letters to Santa.  Here, Rebecca helps Izzy post hers. 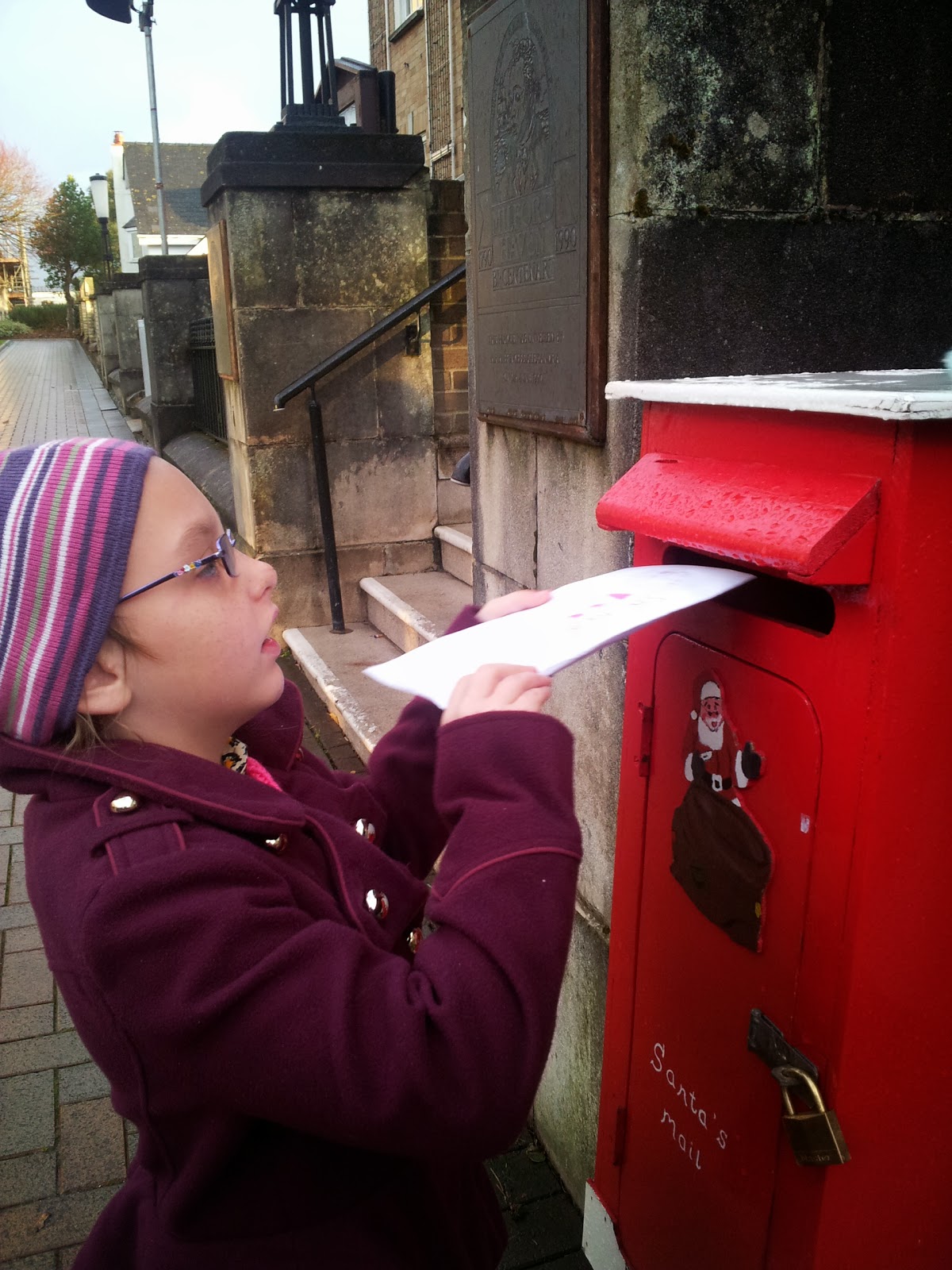 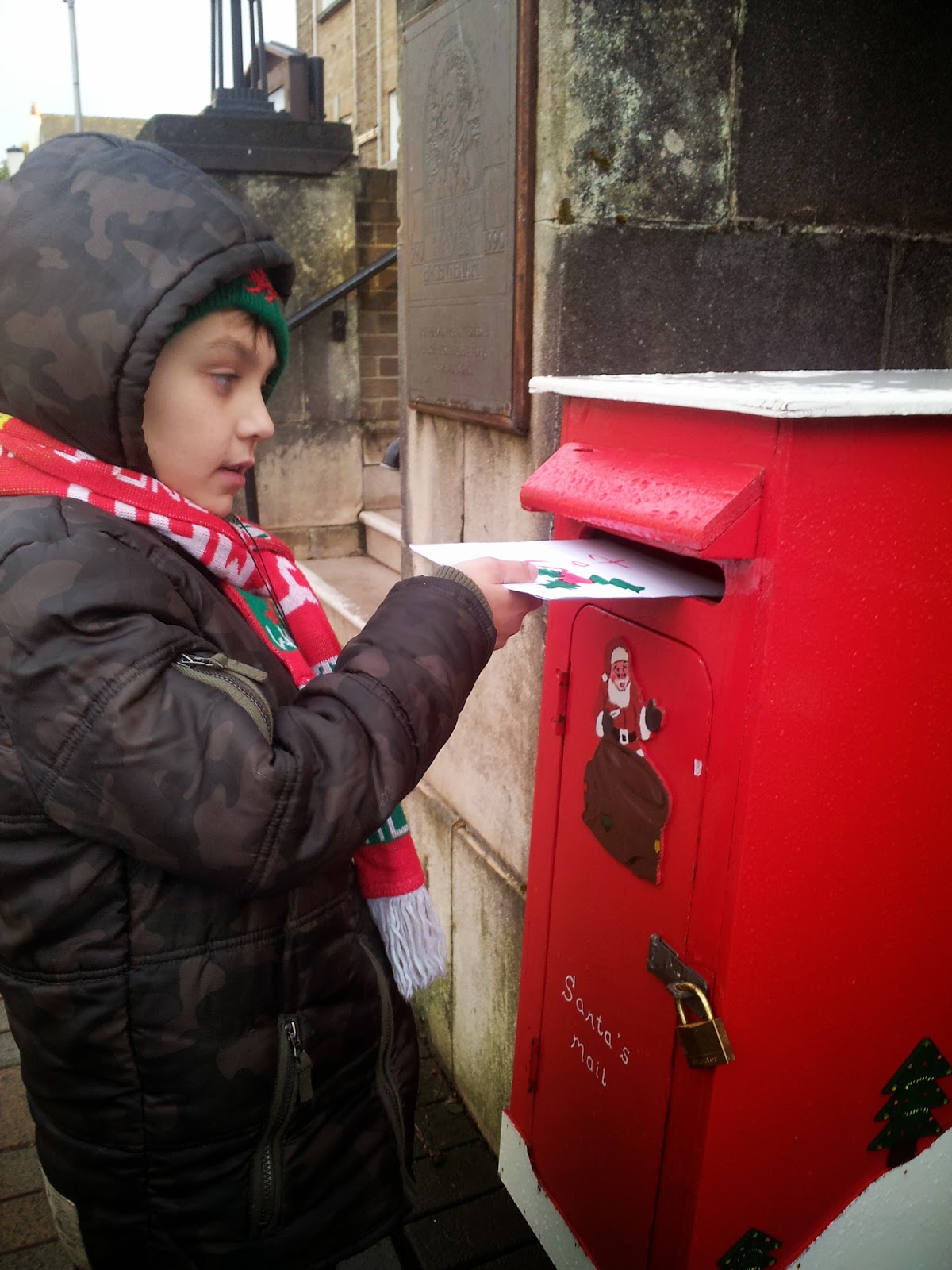 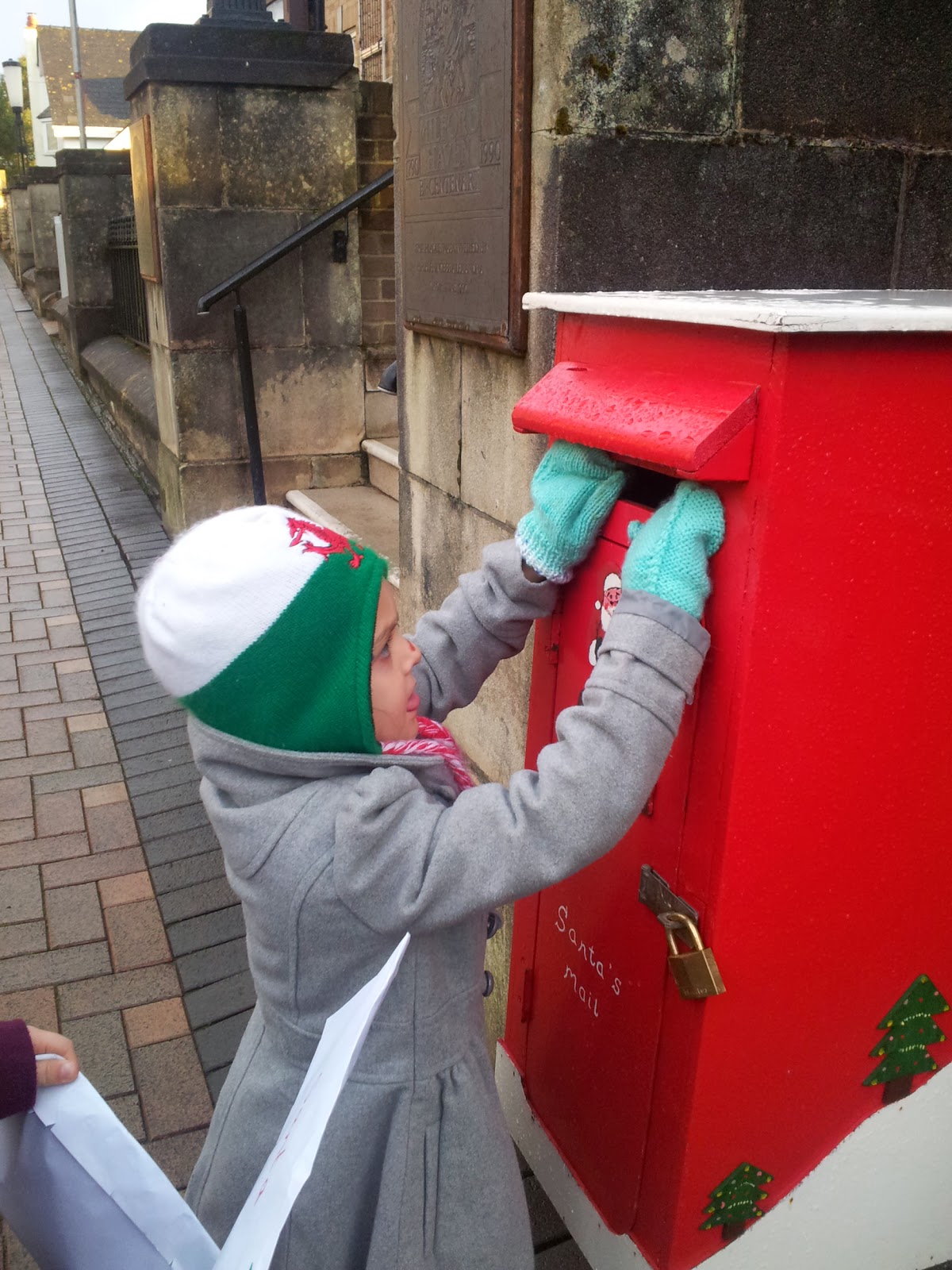 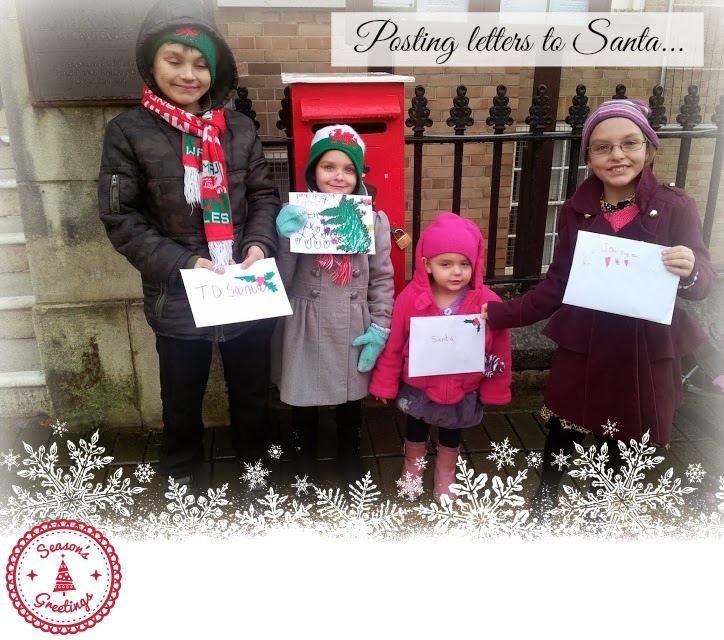 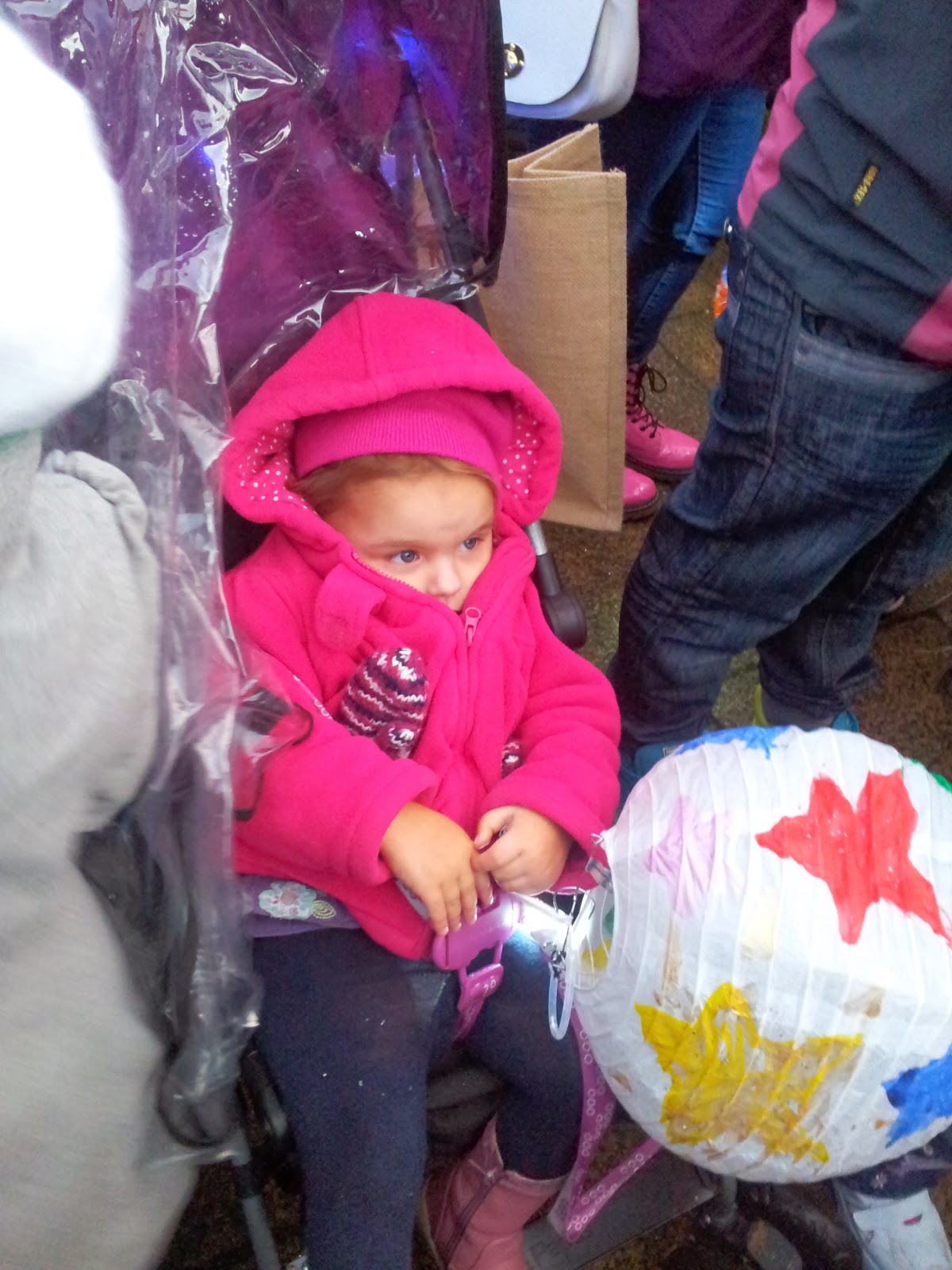 Then it was time to get ready for the Lantern Parade.  The Council try to organise it through the schools, and just a few years ago, it was a nice day to see all the various Heads and teachers in Milford Family of Schools.  I used to take part as a teacher before Danny was born, then pushed him around in a pram with my old school and now we walk with his  and the older girls school.  However, it seems to be mainly led by parents nowadays. 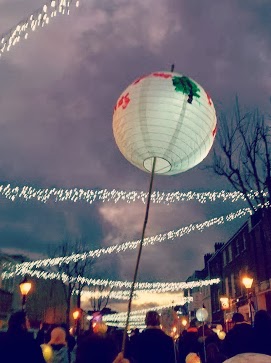 We walk up Charles Street, the “main shopping street” in our town and then up “Hamilton Terrace” back to the Town Hall. 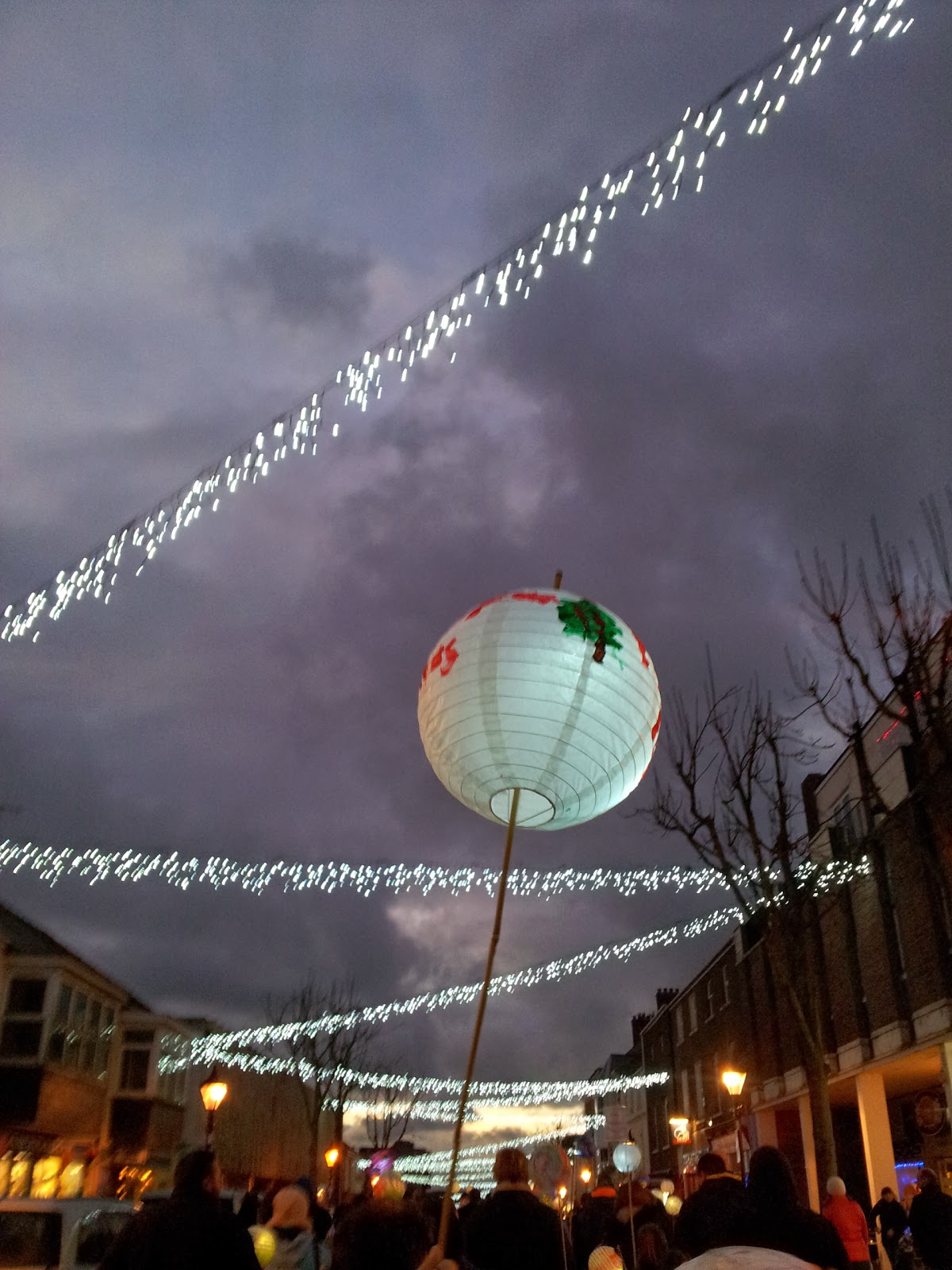 For many years, Danny had to be pushed in his Major Buggy (due to his heart condition, Hypoplastic Left Heart Syndrome).  For the last two or three years he has managed to walk, but not the whole way.  Dave has had to sneak off down a side road with him, let him rest, then rejoin us for the walk up to the town hall.

This year, he managed to walk the whole way without any compaint.  I was so proud of him.  We kept an eye on his colour.  He looked pale, but not particularly cyanosed (blue).  It wasn’t as cold as it normally is and I think that helped him a lot.  It is a huge relief when he does manage to walk without tiring, as he is too heavy to carry now with ease.  When running out and about in the woods, he can pace himself, but marching in a parade he can panic as he hates stopping and people overtaking him and feeling like he will not complete the route in time.

Santa turns the Christmas lights on

He made it and we stopped to watch Santa turn the lights on.  Every year the children in local schools take part in an art competition and the winners help Santa.  This year it was a school friend of Danny’s so that made it exciting.  When Santa “was held up” for five minutes, Danny said he’d ask his friend in school why Santa was late.

We have new lights in our town this year.  They are very pretty, but I was running out of battery on my phone.  I’ll take some more photos in the week. 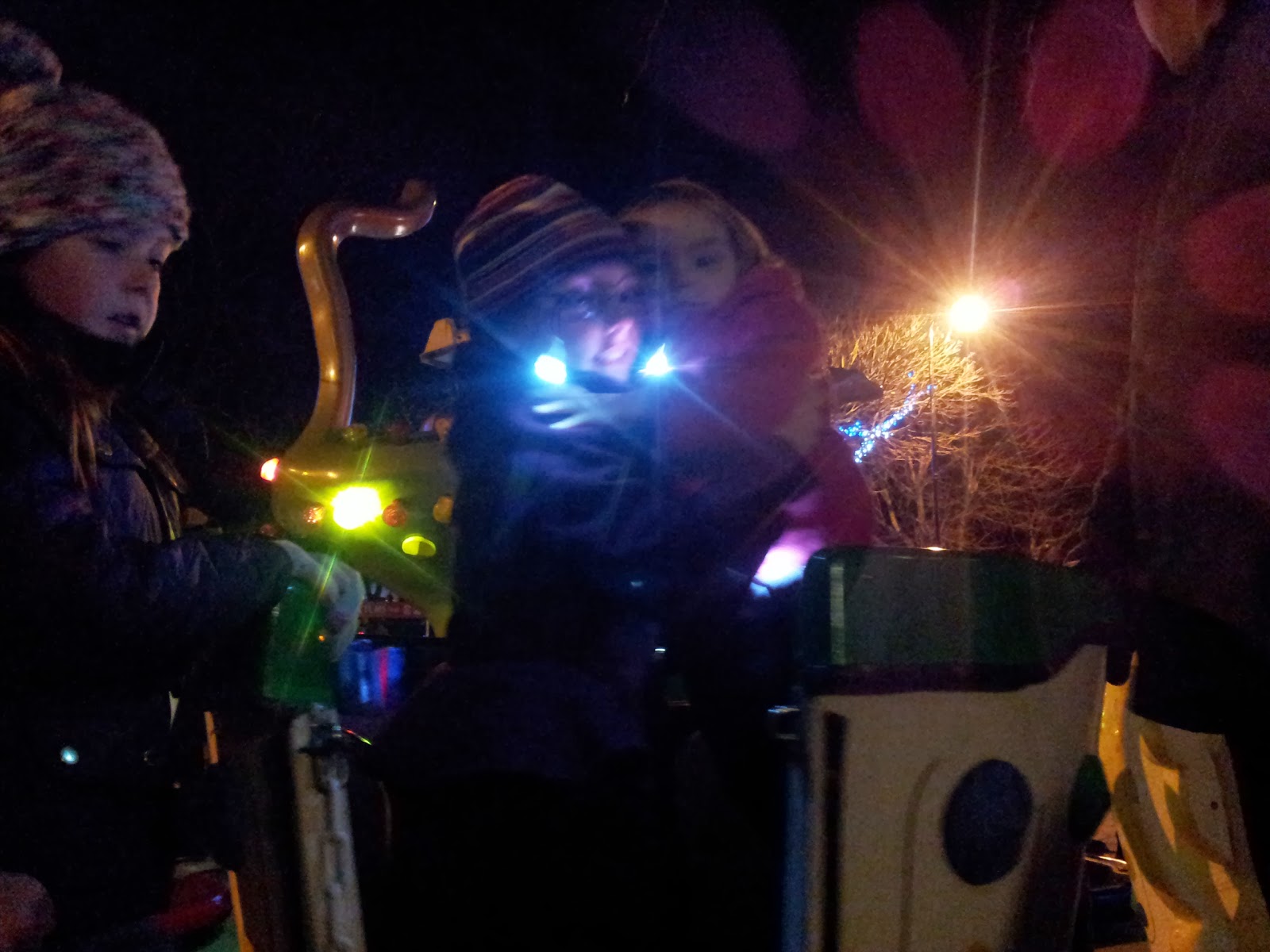 Then we decided to go on the free rides.  There were lots of people waiting for one ride but no orderly queue. This turned it into a free for all and some people were turning up and just sticking their children on, not noticing people who had been waiting for ages.

We waited patiently for ages, then when everyone before us had enjoyed their ride started trying to get our kids on.  One cart stopped by us, so two of our children got on.  The carts either side were taken up by people who had just turned up.

We didn’t mind as we thought the next two kids could swap with the kids on the ride.  The cart did not stop by us this time.  It stopped by different adults who were determined their children were getting in that cart despite not waiting, so Rebecca and her cousin Cerys were very teary when yet again they had not got on during their promised turn.

So, in our original spot we queued again, knowing we had been there for longer than anyone else waiting so logically our kids would get on next.  No, both carts either side of us somehow got filled straight away.

To be honest, at this point I wanted to whisk the girls away and go and do something different as it wasn’t fair making them go though the disappointment of not getting on each time when other children had only waited a few goes of the ride (which lasted ages, which is only a good factor when you are actually on it!), but then some very kind mums suggested that our two children could squeeze into two different carts with different children.

I thought that could work, and Rebecca got into one cart with two lovely girls, willing to share.  However, little cousin Cerys had already been nervous of going on the ride, we had appeased her by planning for her to go on with Rebecca, who would look after her.  Then we had disappointed her a few times by not being able to get her on the ride even thought it was her turn, and now she was terrified of going on with strangers, so she screamed.  Jo started to take her away and possibly by the time the ride had begun, would have distracted her with sweeties, or bright lights or a different ride.  Rebecca was upset that Cerys was upset and didn’t know what to do.

An act of kindness

The kind girls on the cart with Rebecca did not like hearing Cerys upset and one of them, being completely unselfish and generous said she did not want to go on the ride when someone else was upset, so offered her place to Cerys.

I called Jo and Cerys to let them know, so Rebecca, Cerys and a new friend went on together.  The whole way around, I was worried that a repeat of what had happened to us would happen, and the lovely girl who had sacrificed her go, would not get on next time.

It was a huge relief and definitely much deserved good karma when she did get to go on with her friend after.  I did thank them in person, but I have to write that I am so grateful for their act of kindness, and I have to say, it is typical of what I see every day in our town from the wonderful kids raised here.  I’m sure you see the same where you live too and I think it’s a shame that media focuses on the negative when I find the attitudes of children so positive.

Thank you!  They were such kind girls and mums and they made my little niece’s day!

We then went on the teacups where it was far easier to get a ride!  The girls ran up to it and were going to get on immediately.  I stopped them and told them to let others waiting go on first.  We waited for ages and a teacup was still empty, so after spending so long queuing for one ride unsuccessfully, we were delighted to get on this one with no fuss.  All the girls went on together.

We then went to see the lit up stable with baby Jesus.  This is my favourite part of the event, as it brings me right back to my childhood and being excited to see the baby Jesus.

It was then home for tea, hot chocolate and onesies.  We had planned to watch a Christmas DVD, but it was so late, we are now aiming to watch it tomorrow afternoon!

Does anyone else feel it is so hard to fit everything in this time of year?

We have finished swimming lessons for this year, and we will have the last of Brownies, cubs and gymnastics this week so hopefully things will get easier!