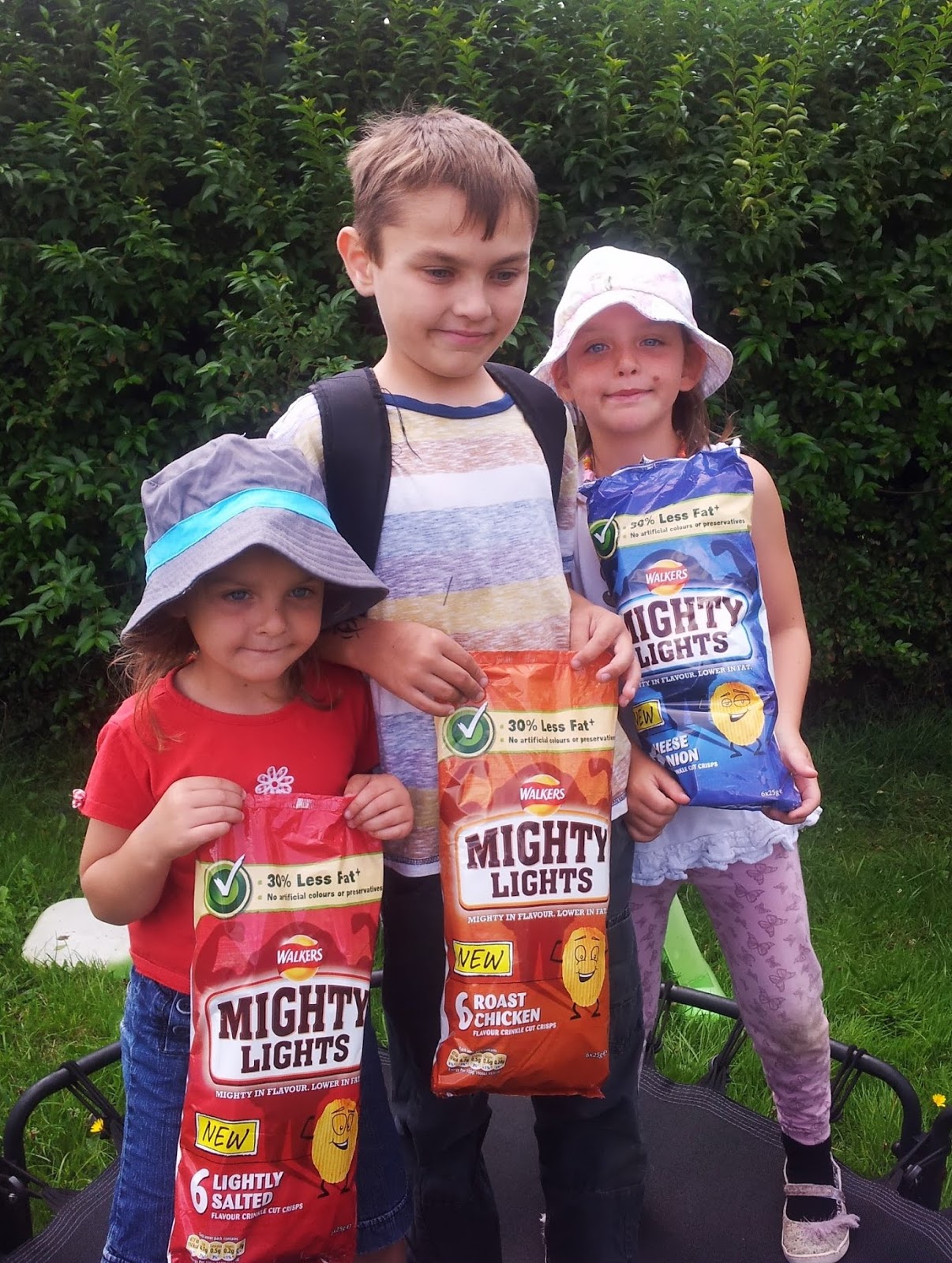 With Summer being the Season for picnics and “on the go” snacks, I was delighted to be sent a box of Walkers Mighty Lights to review.

Our snacks cupboard is being emptied very quickly during these Summer holidays!

As you can see above, we were sent one pack of each flavour to review.

As NEW Walkers Mighty Lights ridged crisps are tasty yet light with 30% less fat; made from real potato with no artificial colours or preservatives and no MSG, they’re being advertised as perfect for little lunches.

I have to admit that before now, I have never thought of putting crisps in the kids lunch boxes.  They love crisps but I tend to view them as a treat rather than a daily food. 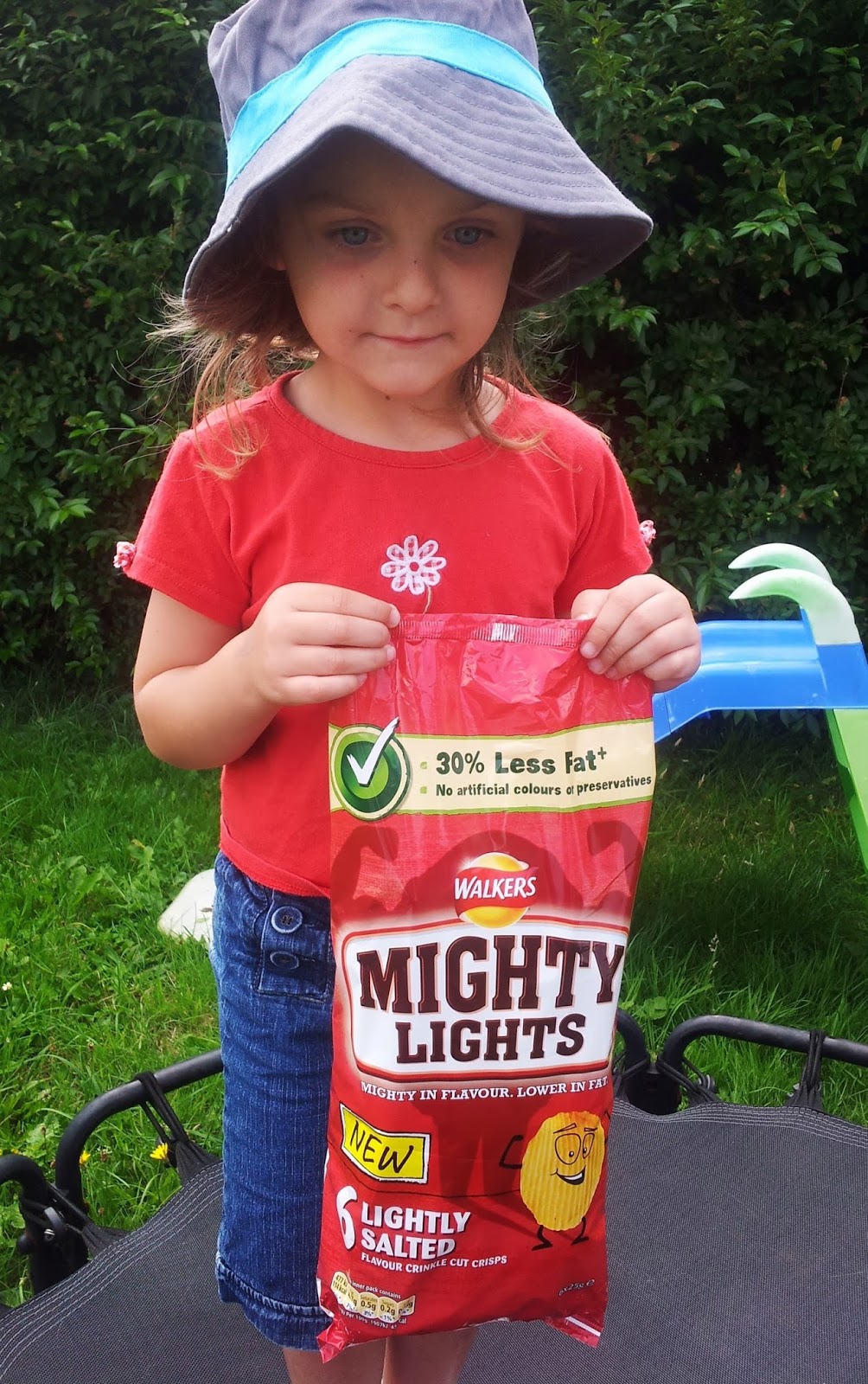 The three flavours are Lightly Salted… 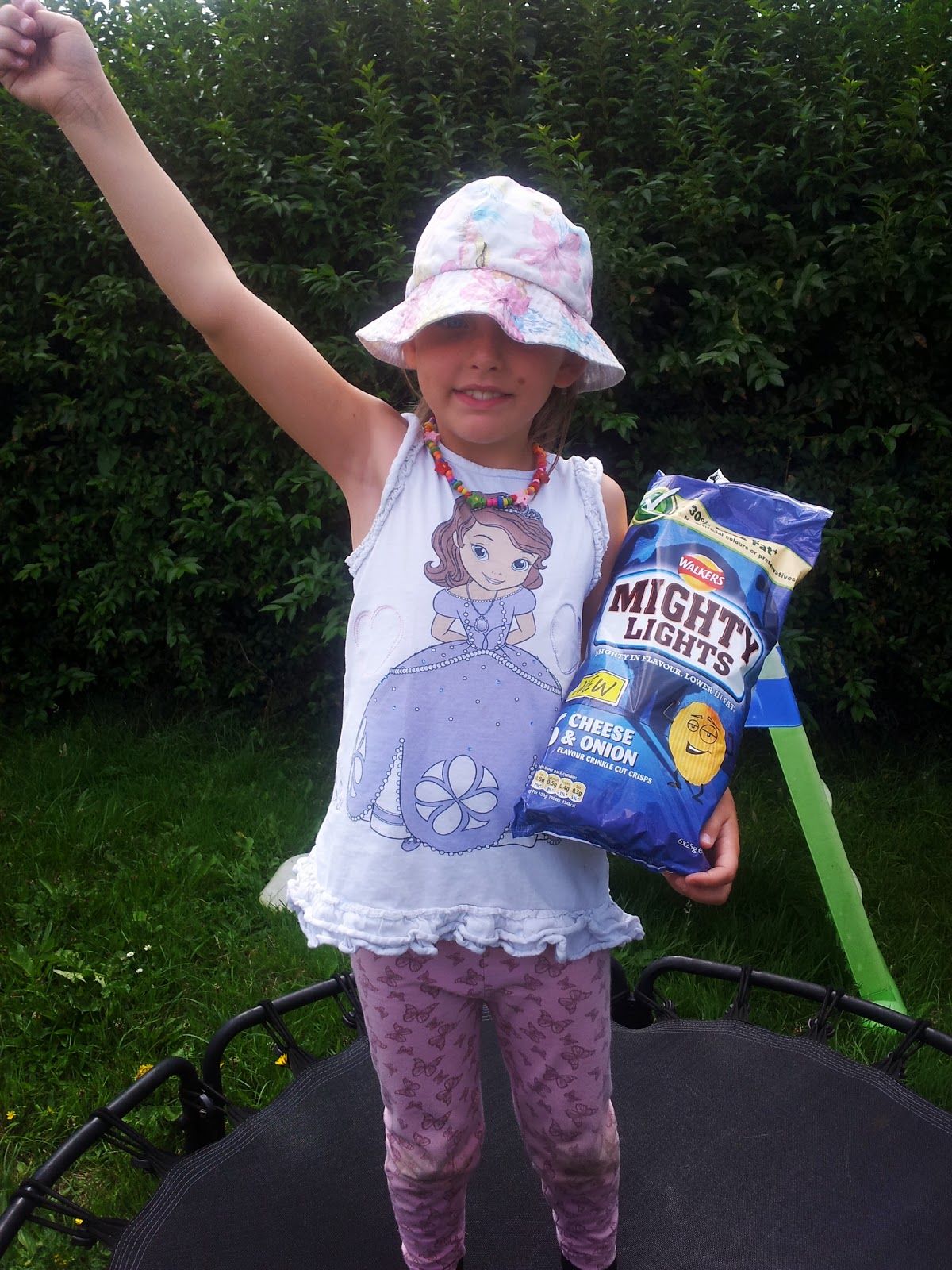 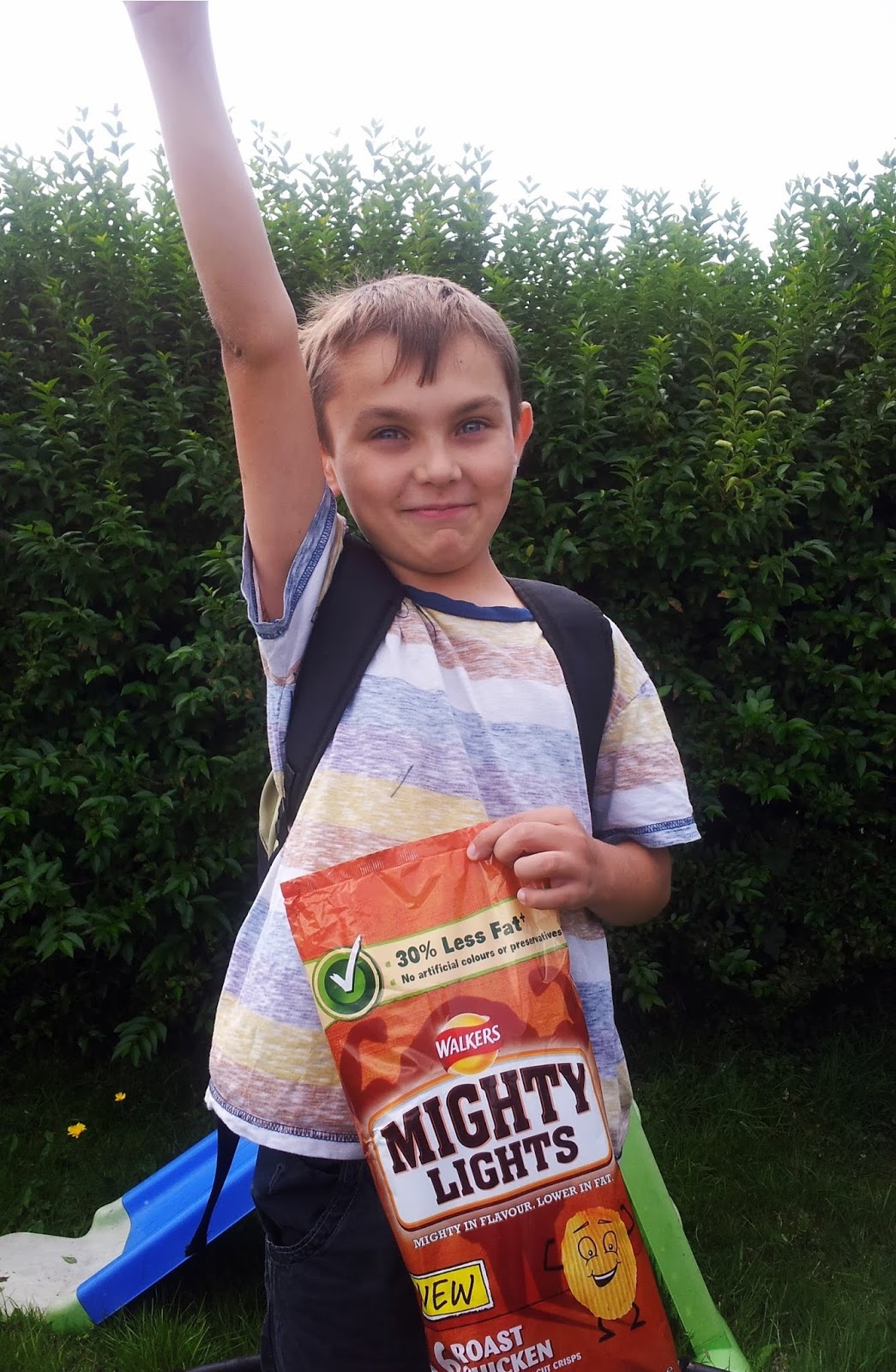 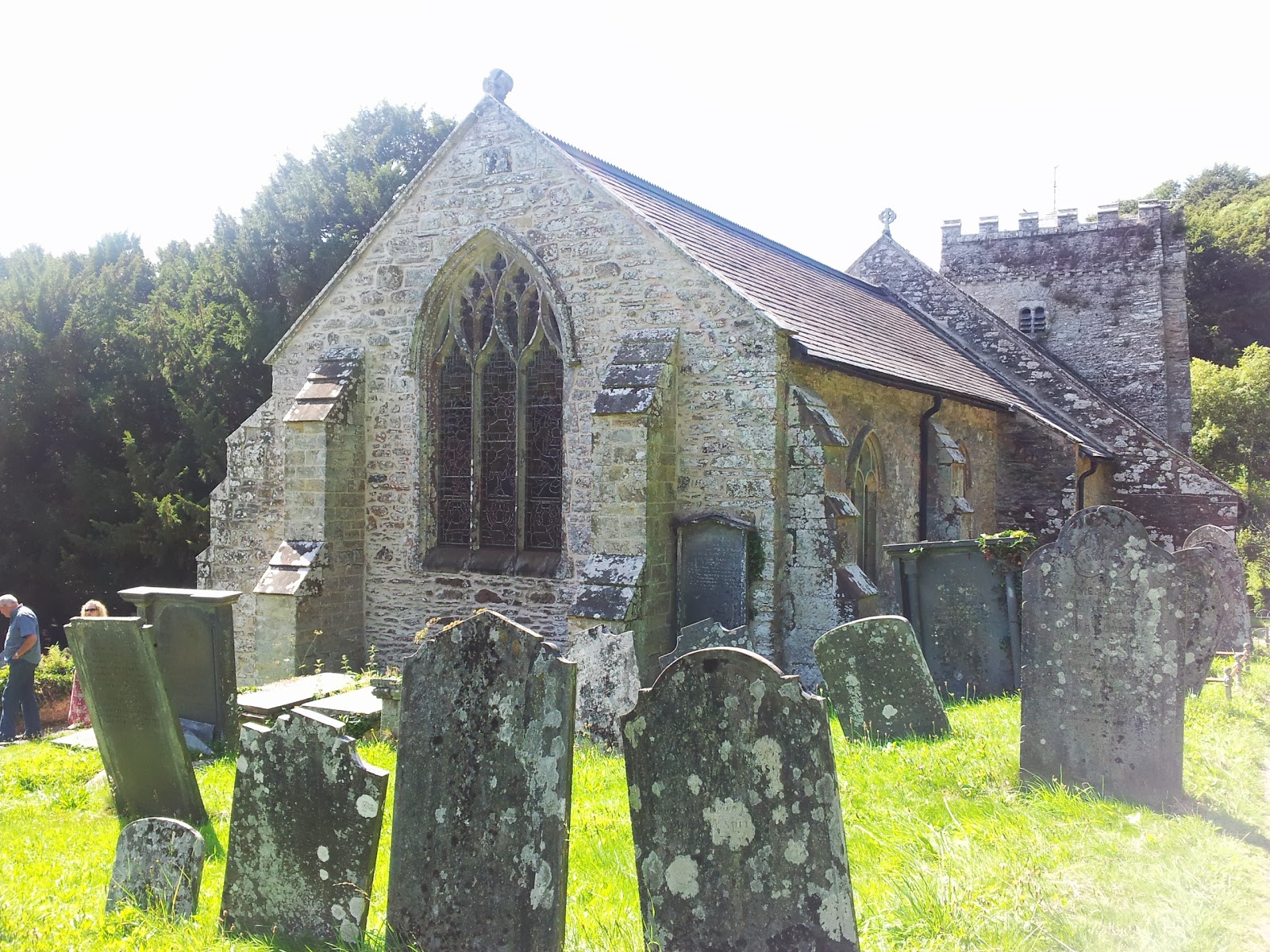 As we were off out for the day, we took the crisps with us to add  to our picnic at Nevern and to snack on the beach at Newport. 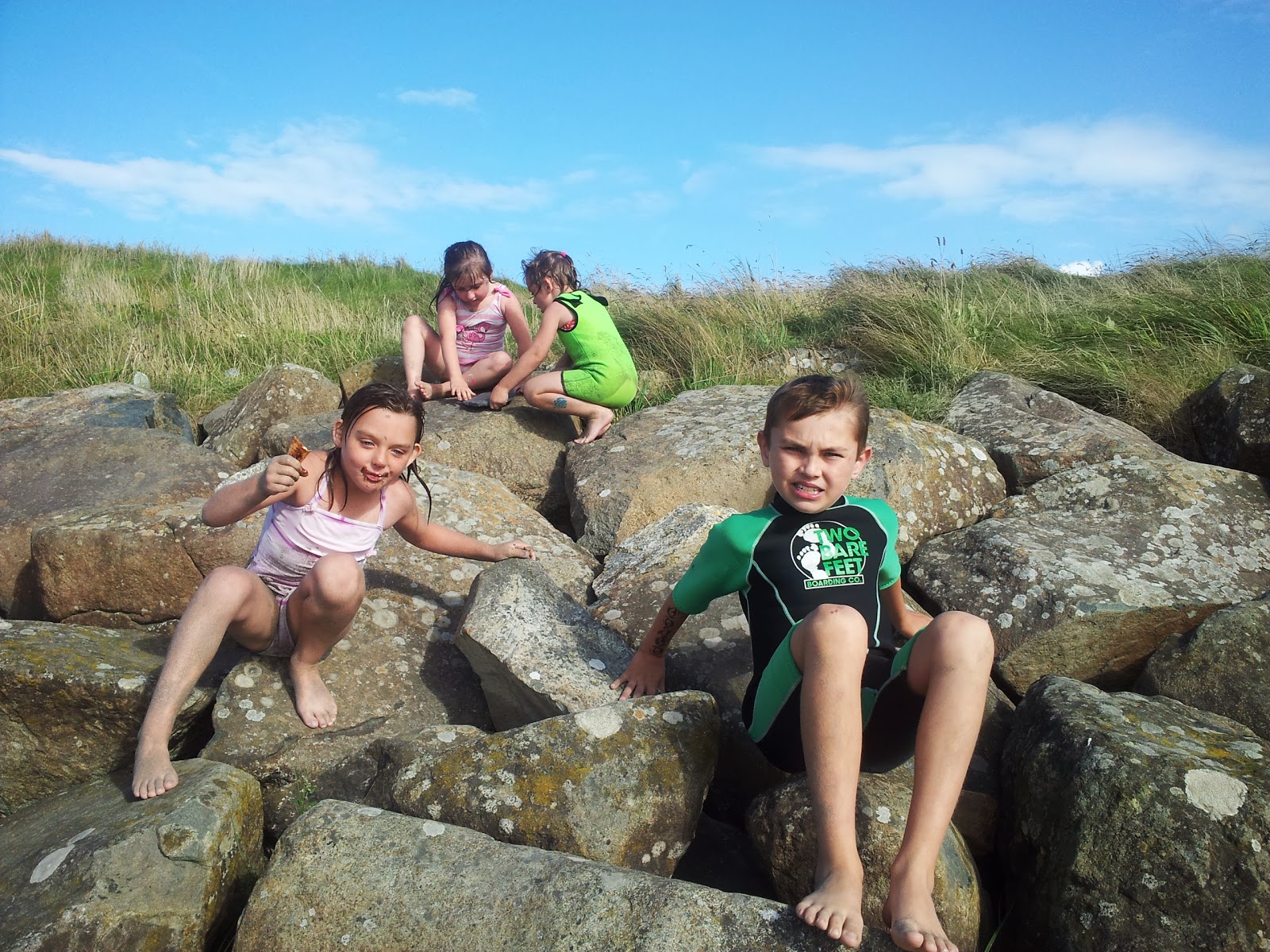 Crisps, like chips taste even better in the beachy sea salt air.

First up we tasted the Ready Salted Crisps. 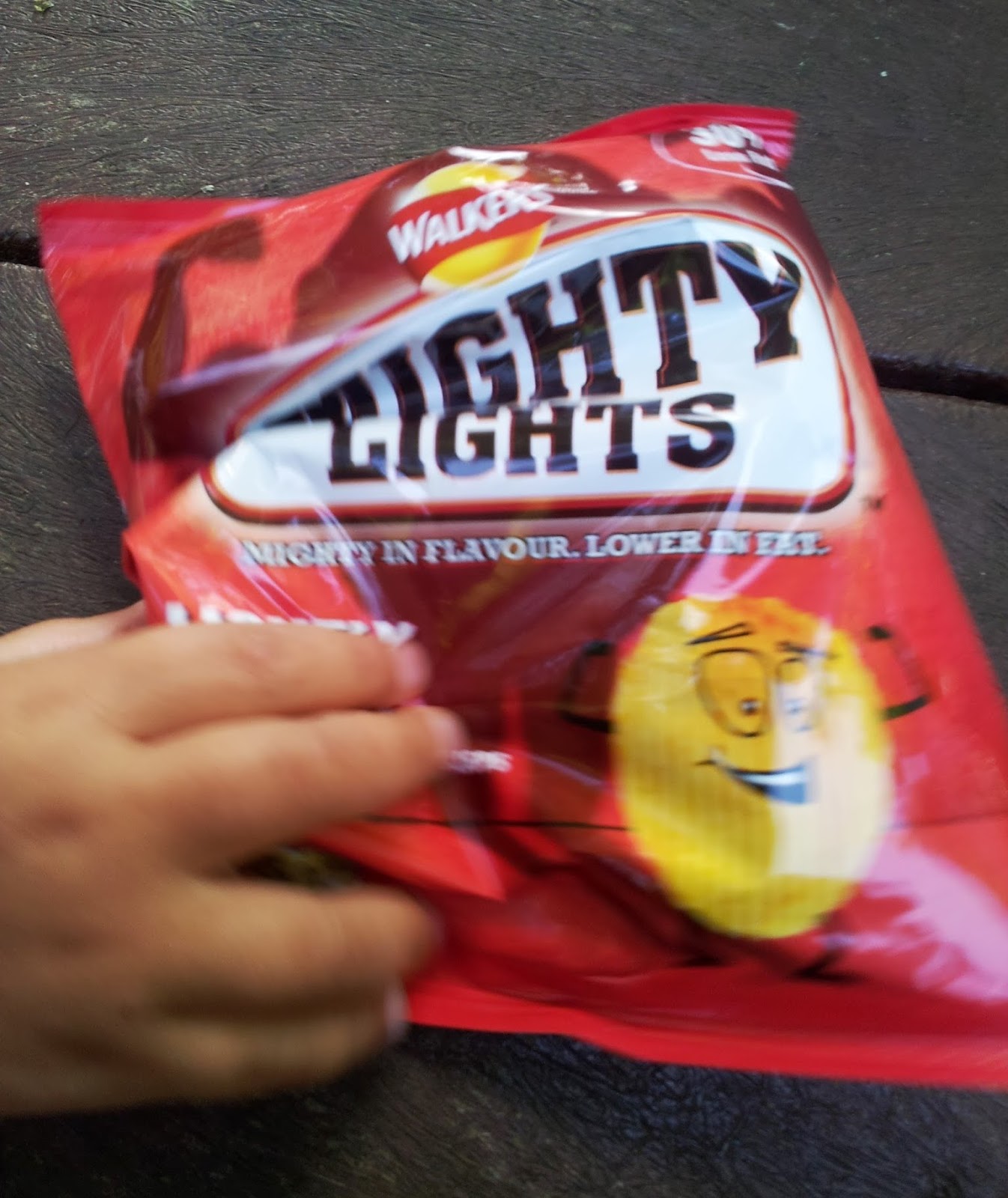 I tried numerous times to take a photo of the crisp packet but someone couldn’t wait to get their hands on them! 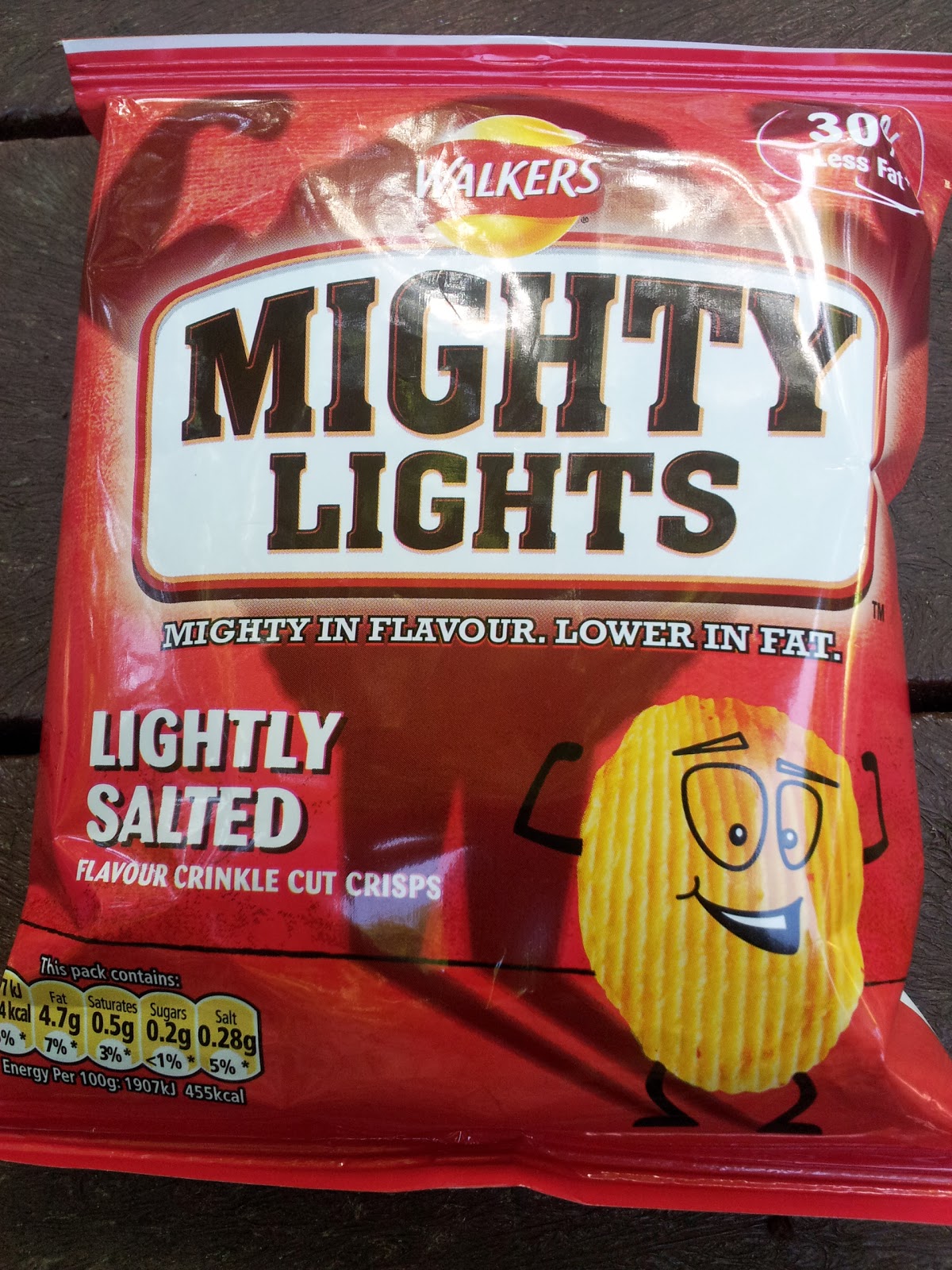 I moved away from Izzy and managed to take a photo of the pack!

There is a cute potato character on each pack too, each with their own little message.

Mmm, the crinkle cut crisps were certainly mighty in flavour, as advertised.  They contain sugar and spices as well, as the expected salt flavouring.  I would be happier if no sugar was added to the flavouring, however they are a  good source of fibre and low in fat.

We all gave Ready Salted a thumbs up for flavour!

Next we tried the Cheese and Onion Mighty Lites.

For years, I have avoided Cheese and Onion crisps, hating both the smell as well as the taste of them.

For some reason, (perhaps due to them being the only flavour lef in the cupboard on occasions!) I have recently started to eat them again.

While the kids tested the Roast Chicken flavour, I couldn’t join in, although they are suitable for Vegetarians, I just can’t face the thought of eating Chicken flavoured crisps.

As a child, before I became a vegetarian, Roast Chicken was actually my favourite flavour.

However, the kids thought they were delicious. 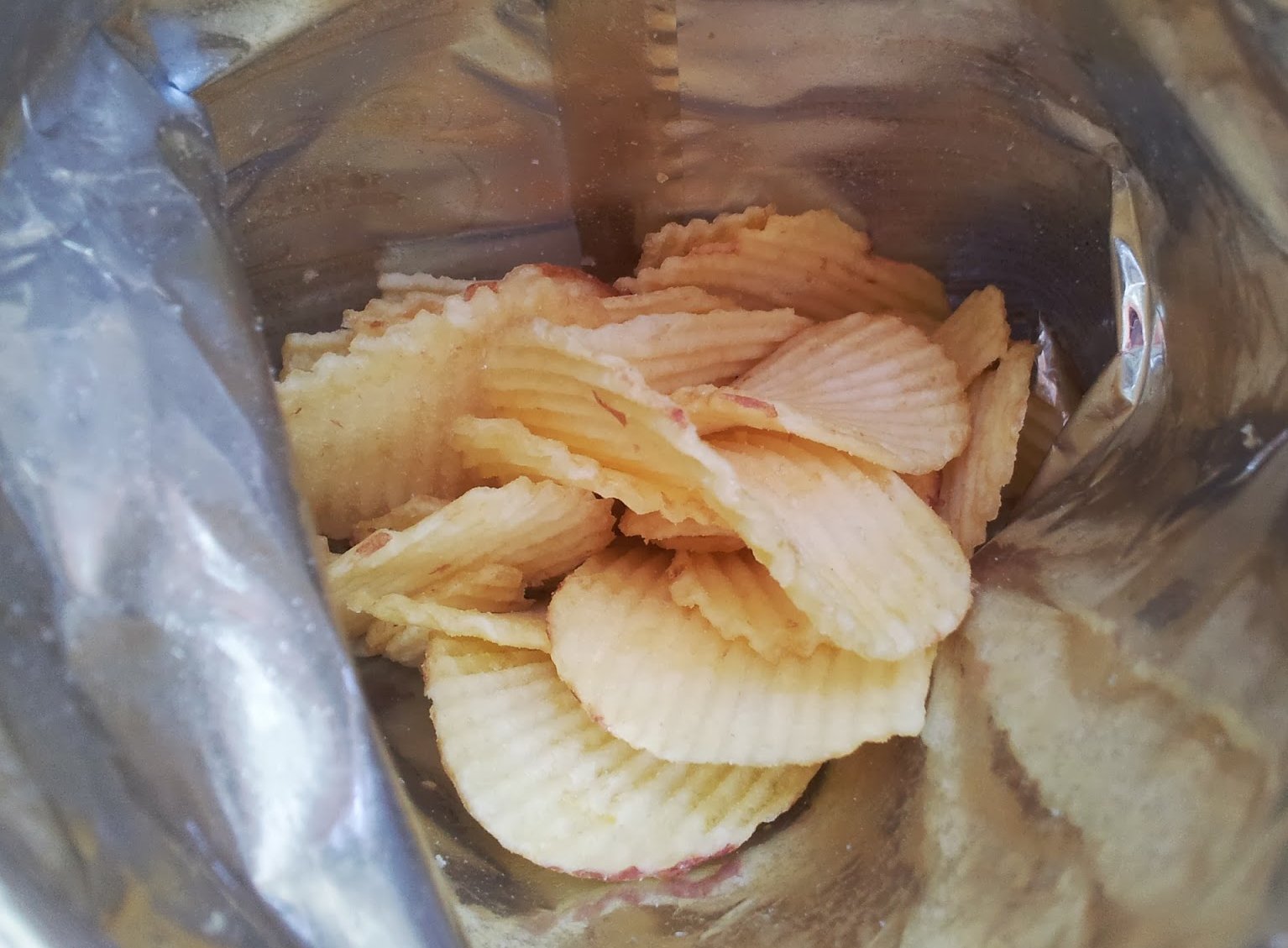 Therefore overall, we enjoyed each of the different  flavour crisps and I do like the fact that they contain less fat than ordinary potato crisps. 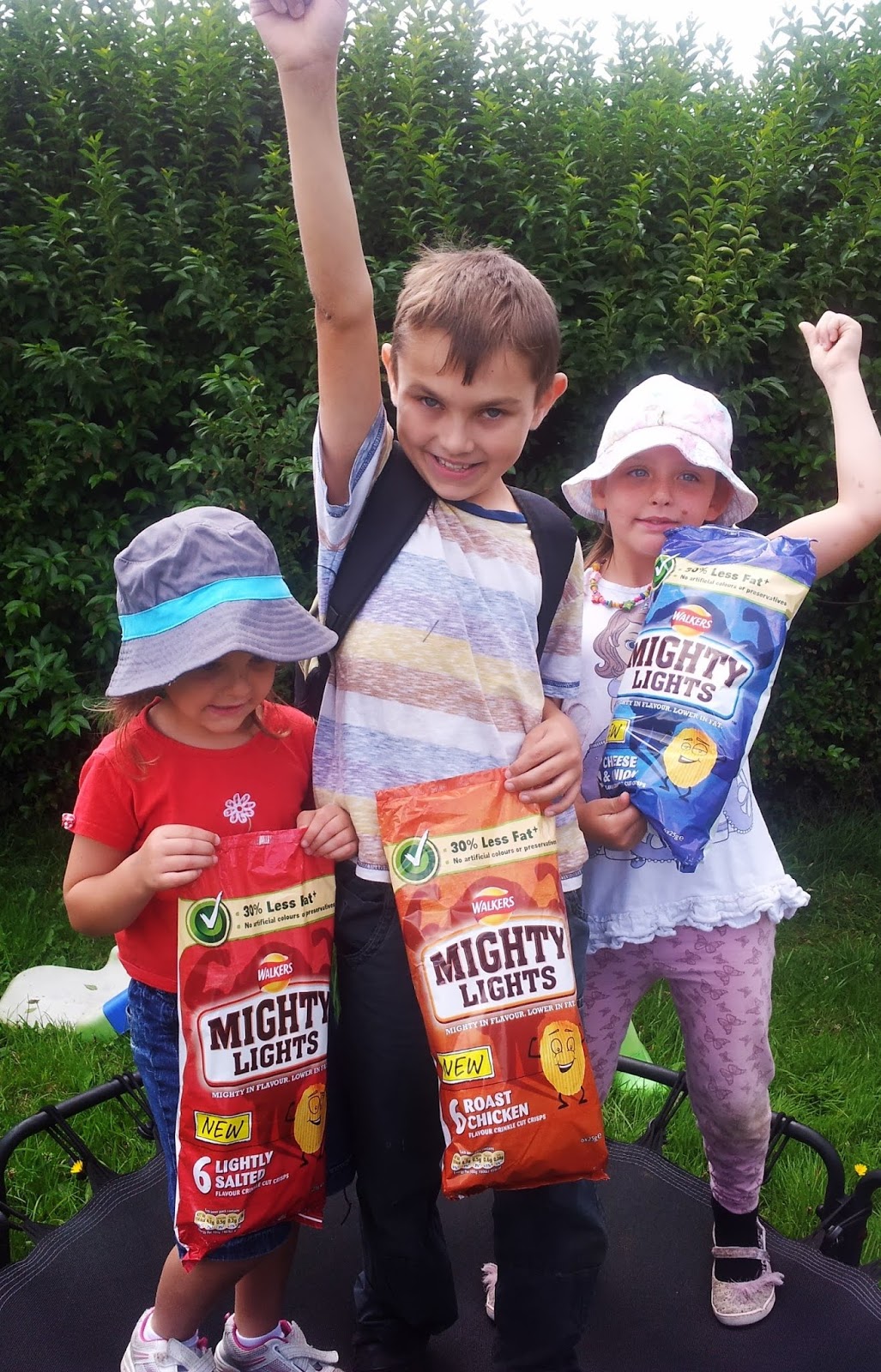 So, would I be tempted to buy these for the kids lunch boxes now?

Well, definitely not for every day of the week, however, I may consider popping them in every Friday for an end of week treat and we will certainly buy them for occasional picnics and school trip lunch boxes, which I like to make up extra filling!

I’m tempted to buy a bag of the Ready Salted just for myself to nibble with a bottle of wine at the weekend too… well, they are 30% less fat…

Disclosure:  This is a Sponsored Post and I was sent Walkers Mighty Lites to review.  All opinions are honest and my own.