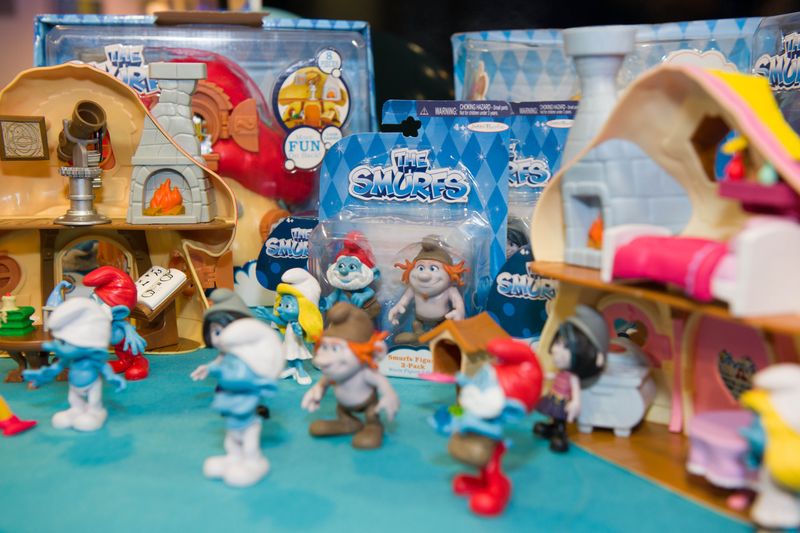 We were very excited to attend Jakks Pacific “The Smurfs 2” Toy launch this weekend.  The kids loved the first Smurfs film and regularly re-watch it on DVD. 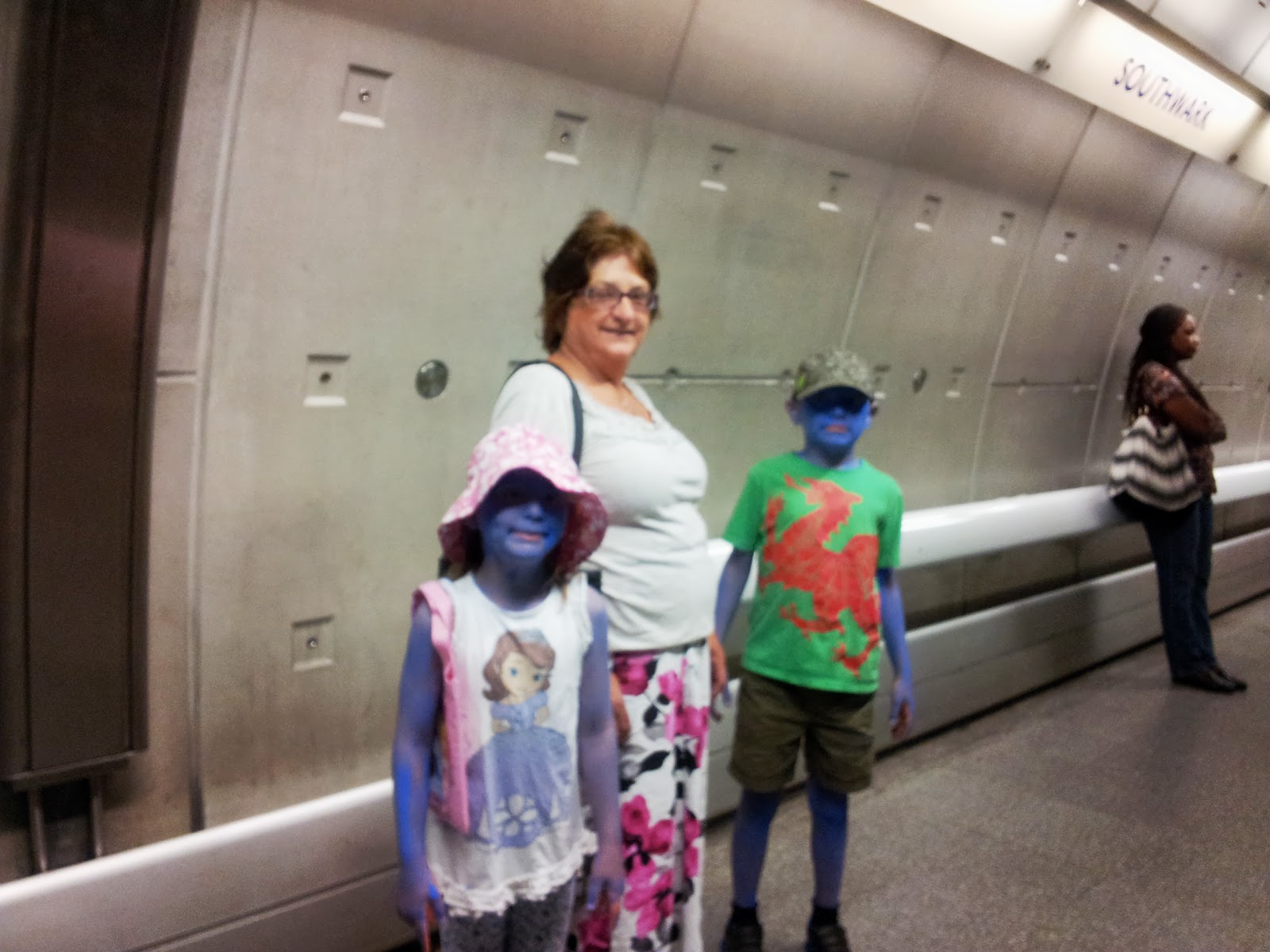 They have also started collecting the free McDonalds Smurf figures
too, but I knew they really wanted to see some proper toys and playsets. 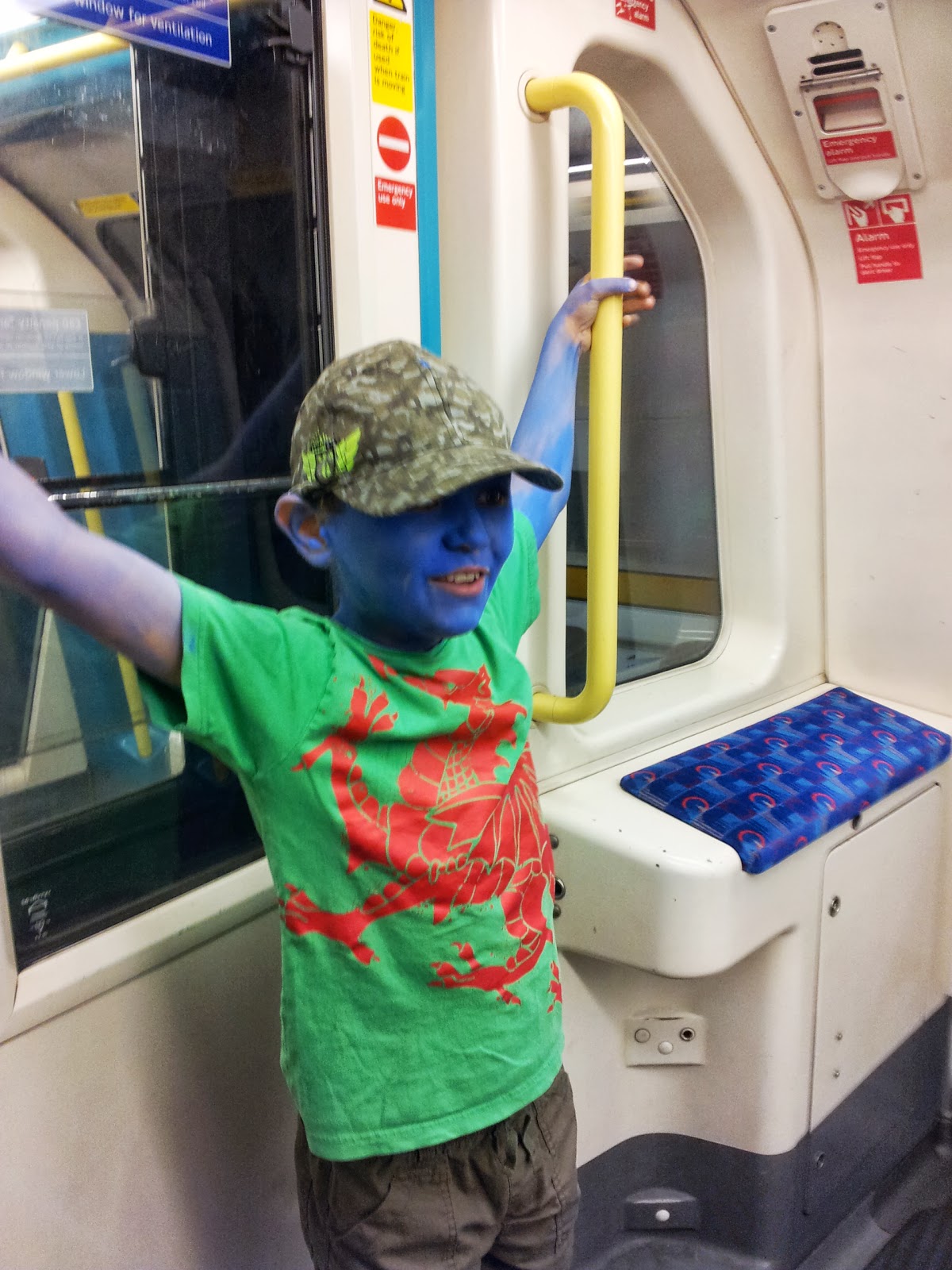 There
was an option to dress up for the party, so I asked Danny and Rebecca
which Smurf they would like to be, anticipating maybe Papa Smurf and
Smurfette or even the new characters Vexy and Haukus. 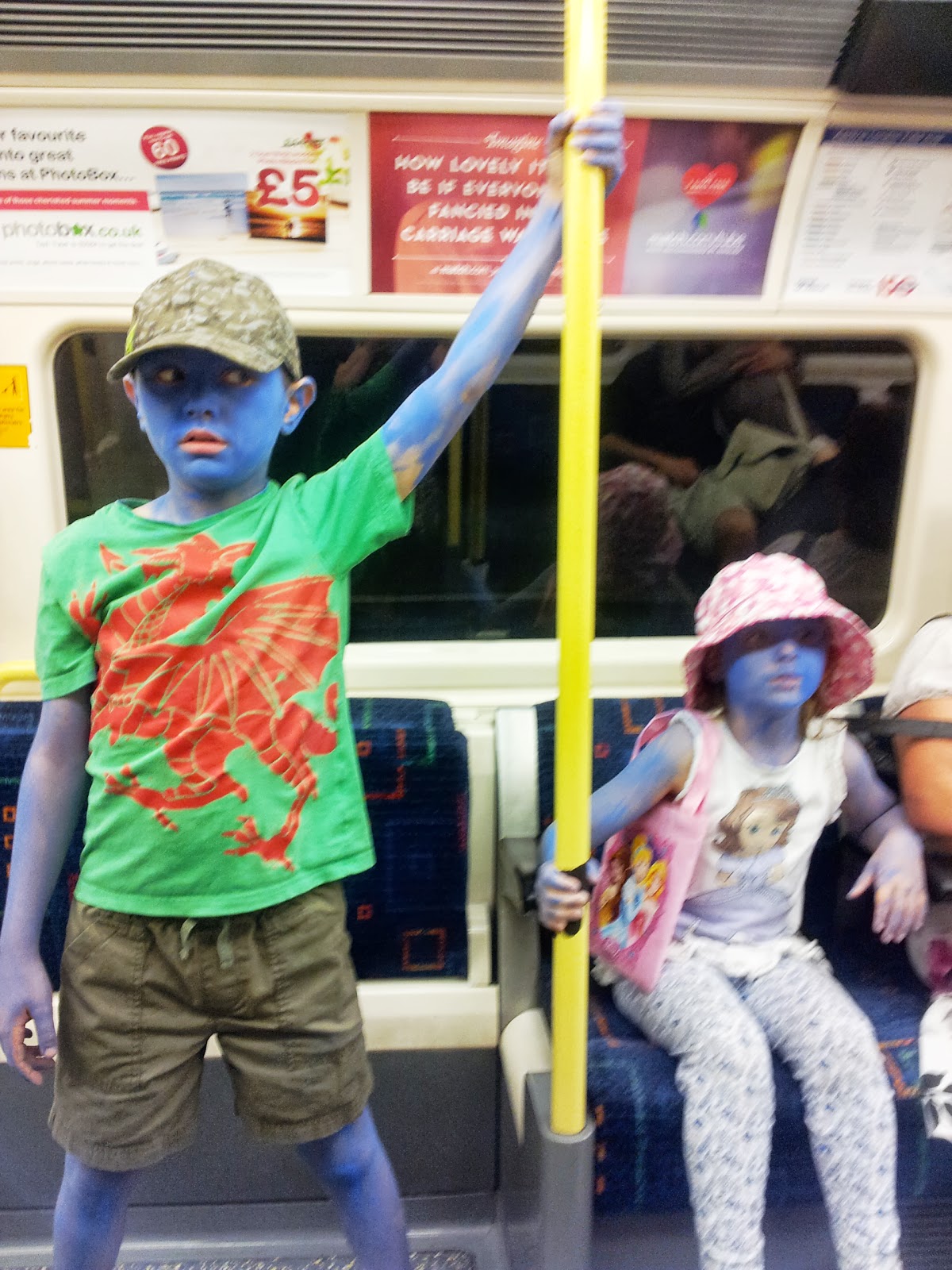 I should know by now never to assume anything with kids.  They wanted
to be their own Smurf Characters, “Danny Dragon Smurf” and “Rebecca
Lily Smurf”.  They chose their own clothes to wear and asked me to paint
them blue on the day.

It was a huge rush Saturday
morning getting them dressed, having the hotel breakfast and then back
to the room to be face and body painted.  I just packed standard
Snazaroo blue paint, I should have looked for a lighter Smurf colour,
but being away from home and short of time this had to do.

Rebecca
suddenly decided the Smurfy dress she had chosen to wear was not comfy
enough so changed into a Sophia The First Two-piece instead, and then
we were off.

We did get some looks walking around London
with two kids in their own clothes wearing dark, blue body paint, we
also got lots of smiles and lovely comments, so that was nice.

We caught our  tube, changed lines with no bother and got to our destination stop on time.  However, then we were lost, and there being Odeons, cinemas and theatres at every corner in the West End did not help.

We bumped into Unique Young Mum and her cute Smurf, Spud and eventually found our way there together.

I hate getting to events late, but we were made to feel so welcome from the start. 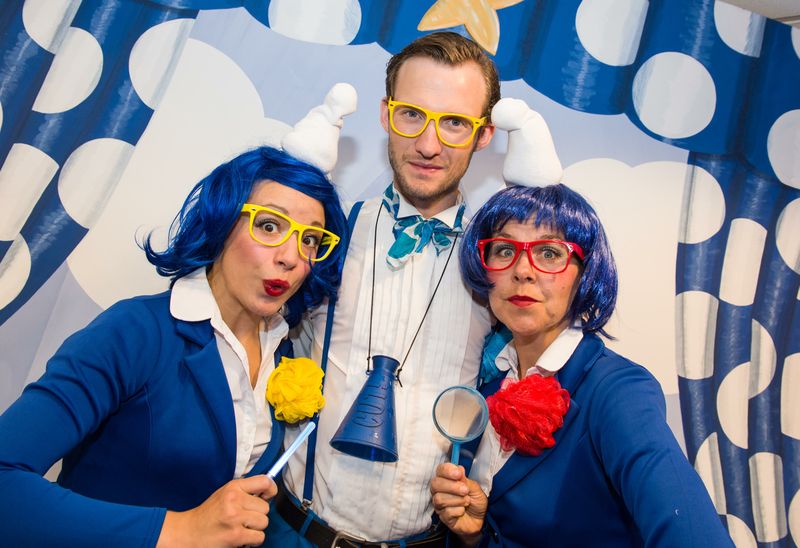 The Official Smurfologists were great!  They checked to see if we were real Smurfs, espcially as the kids were blue.  One asked if we had taken some Smurf Essence and Rebecca told them that she had used facepaint! 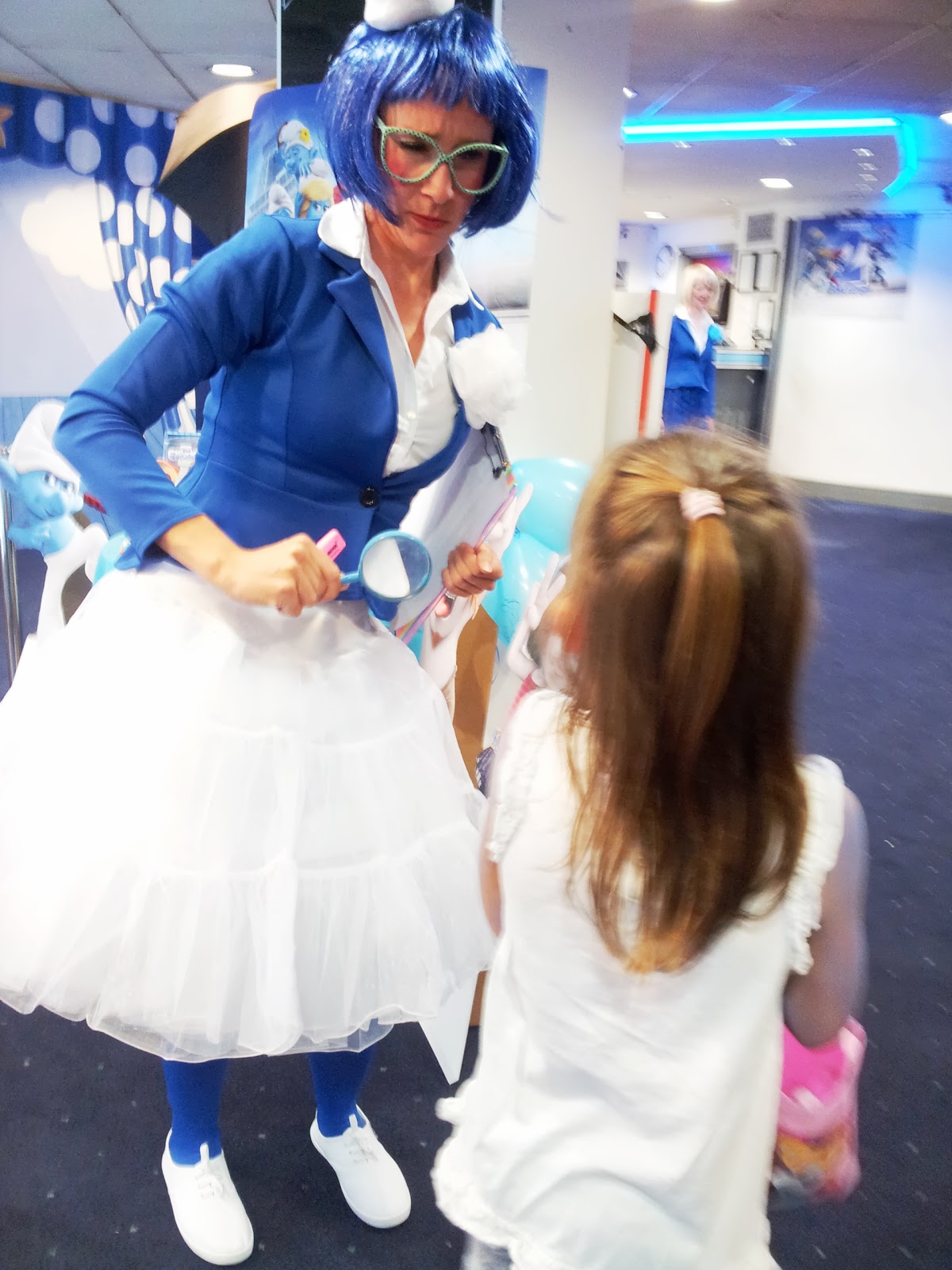 We were offered popcorn, sweets and a drink and ushered in to watch Smurfs 2. 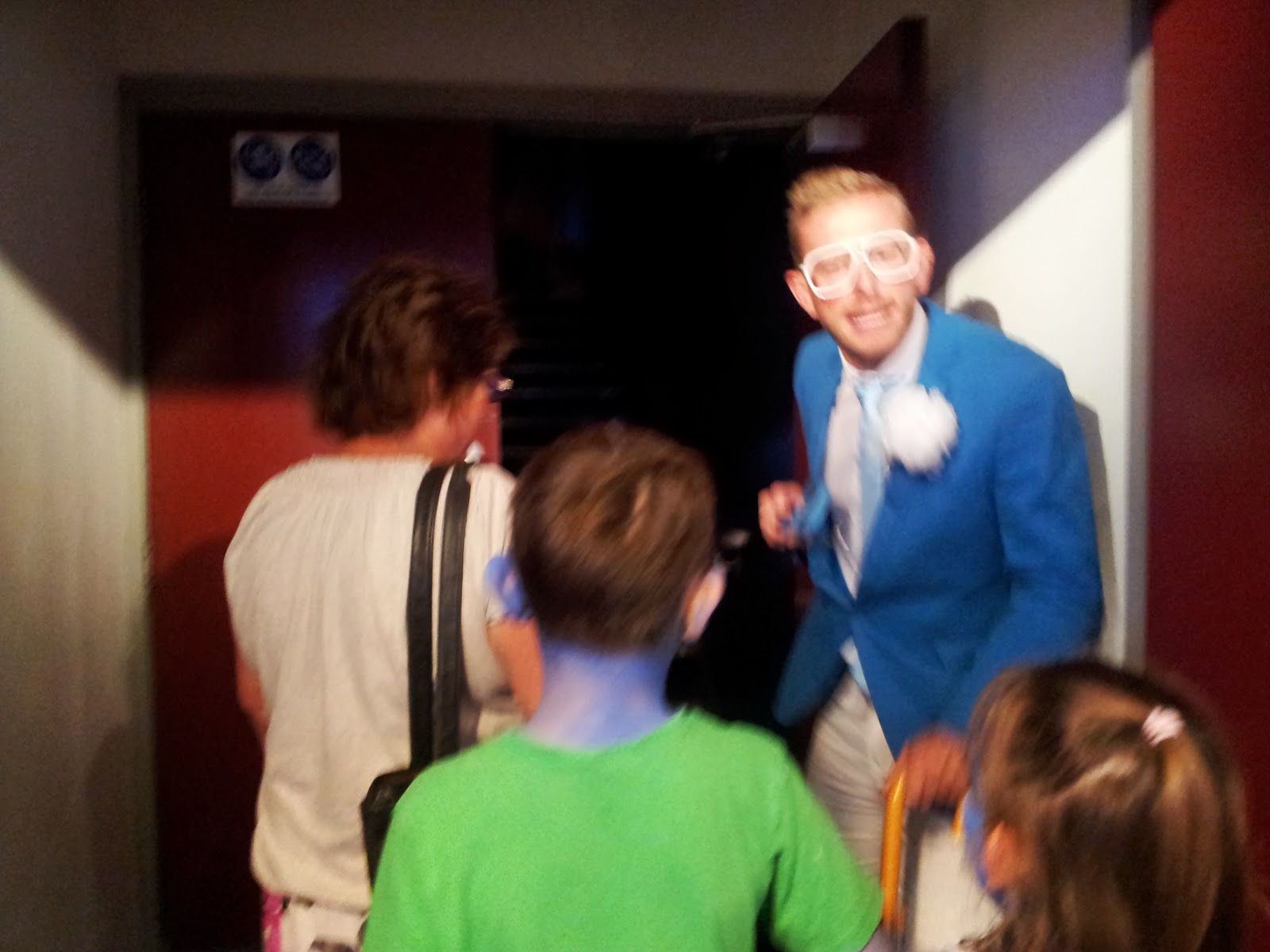 The kids loved the film and I enjoyed it more than I thought I would.  I love fairy tale style films which start with the opening of a traditional story book.  I love the parts of the film that were set in The Land of Smurfs and would have been quite happy for the story to stay there.

Danny’s favourite part was when The Naughties and Smurfette were naughty in the sweet shop!  Rebecca liked it when Vexy and Haukus were rescued and taken to live in The Land of the Smurfs. 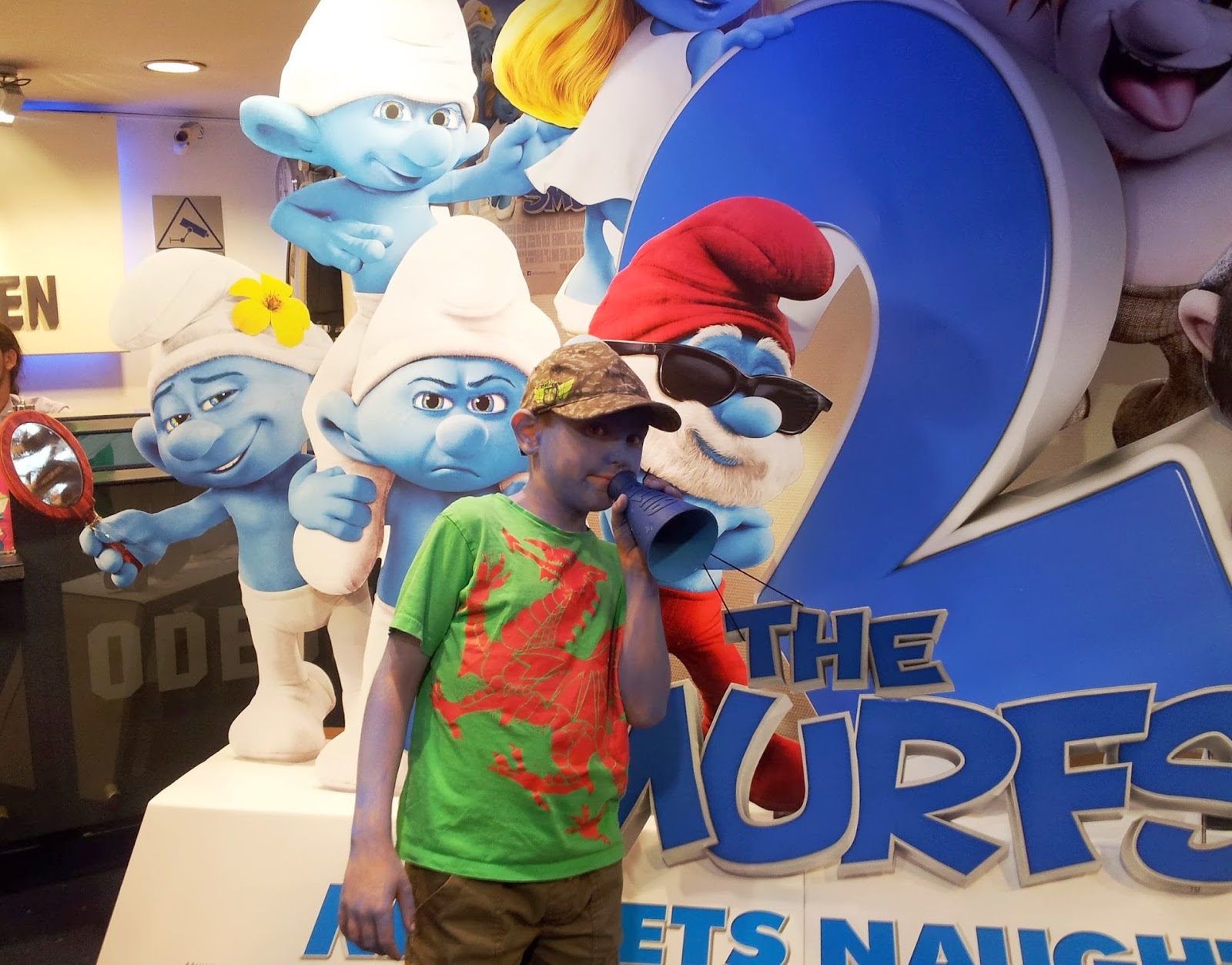 As well as the magical Smurfland I also liked the music numbers and the Smurfs acting cool to add even more humour to this funny film.  I didn’t like the parts with the evil wizard, Gargamel in (no, I wasn’t scared!). 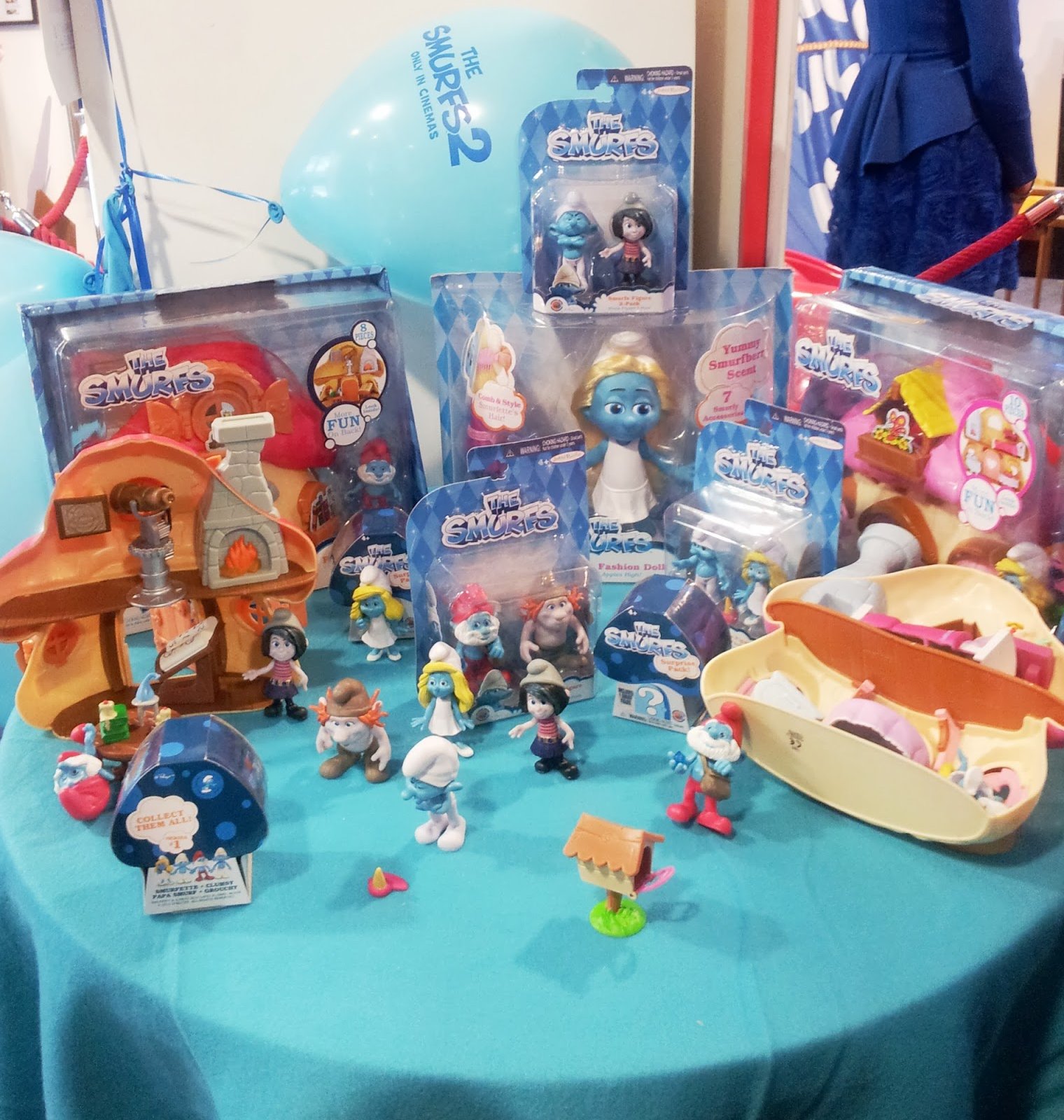 The new toy range is great.  I had already looked at the Papa Smurf’s Mushroom House Playset in Argos recently and thought it looked  like a good value toy.  I know Rebecca really wants Smurfette’s Mushroom House  Playset.

The Smurfette Fashion Doll has now been added to her birthday list too.  It measures three apples high- just like a real Smurf- has lovely stylable hair and comes with  interchangeable dresses, shoes and bags- I love it!

There are also Multipacks of the characters or affordable Grab ‘Em Single packs of all  the main characters. 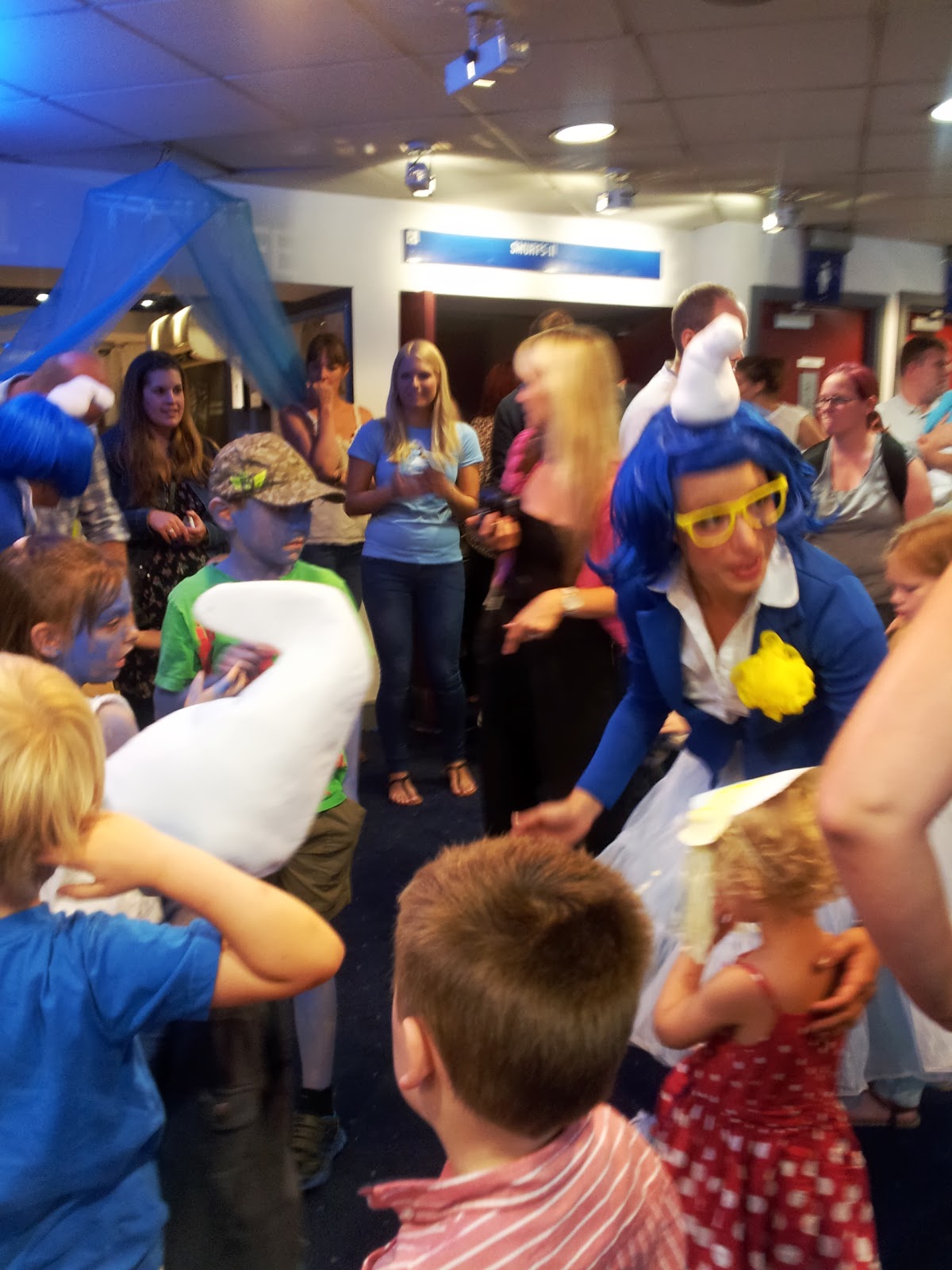 After the film screening,  and a quick Smurfy Warm-Up, we joined in with the fun, very well organised activities. 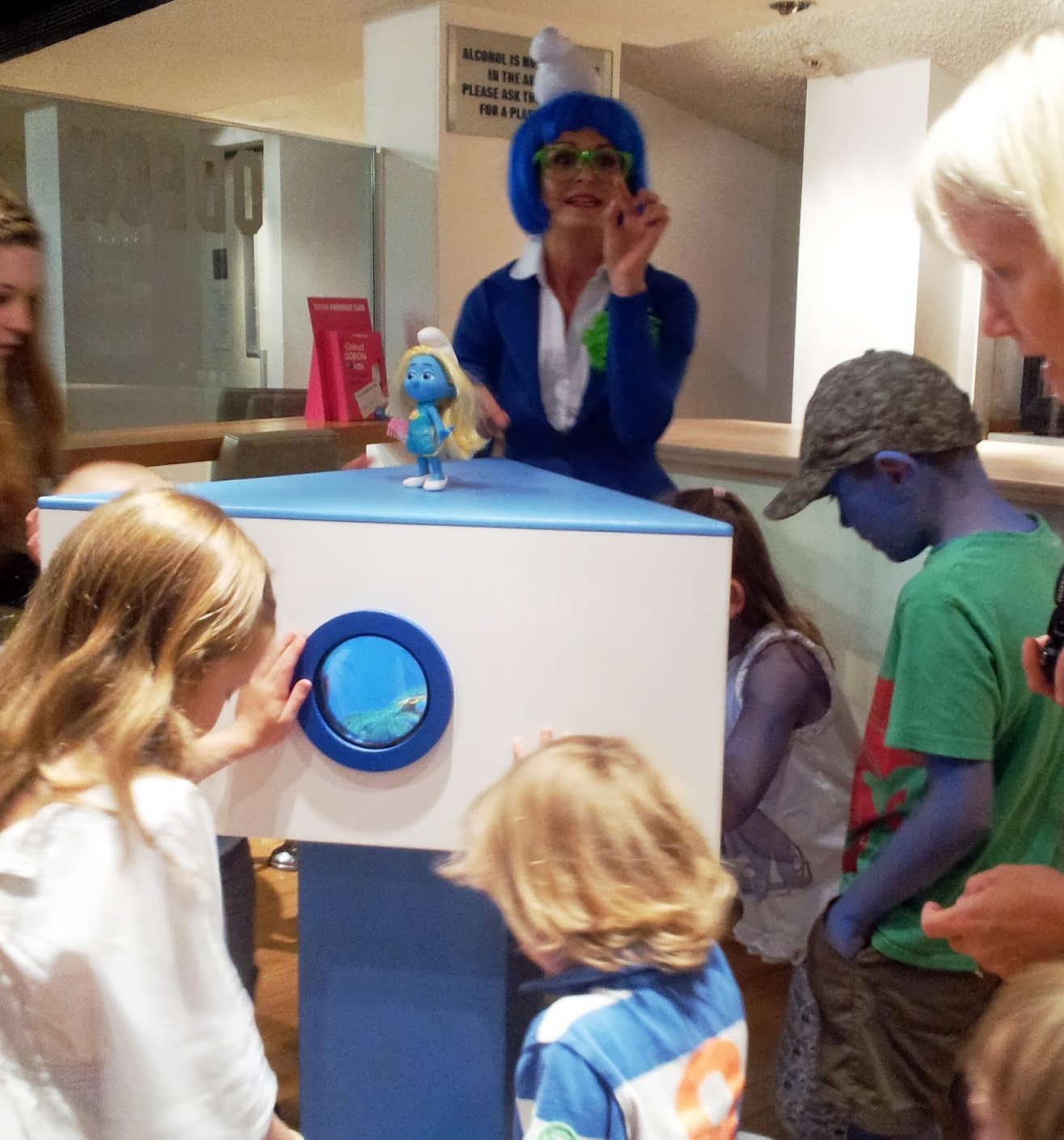 We looked into a peephole into a real Smurf World. 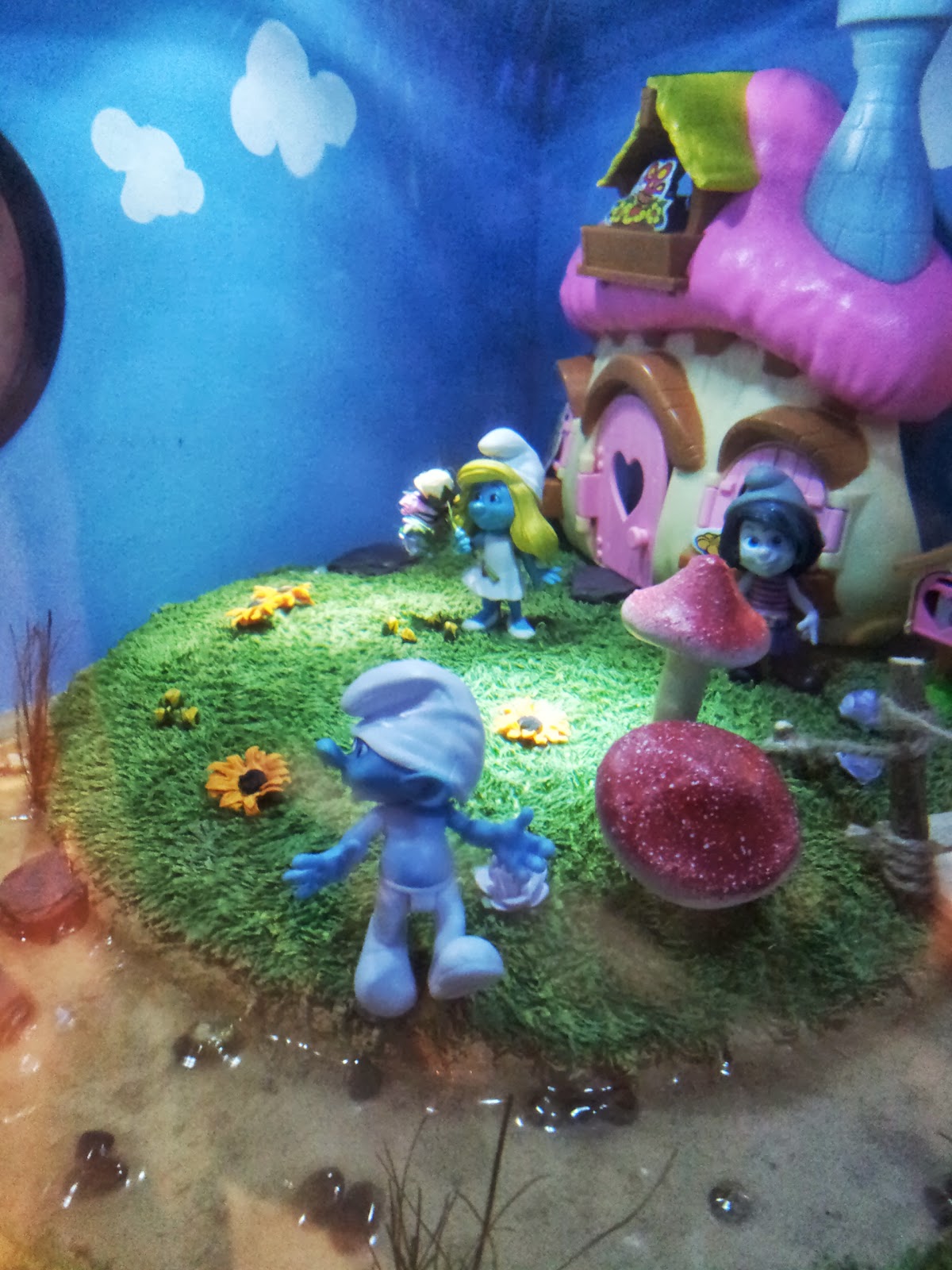 It has given me ideas for creating a new, magical Smurf playscape with them. 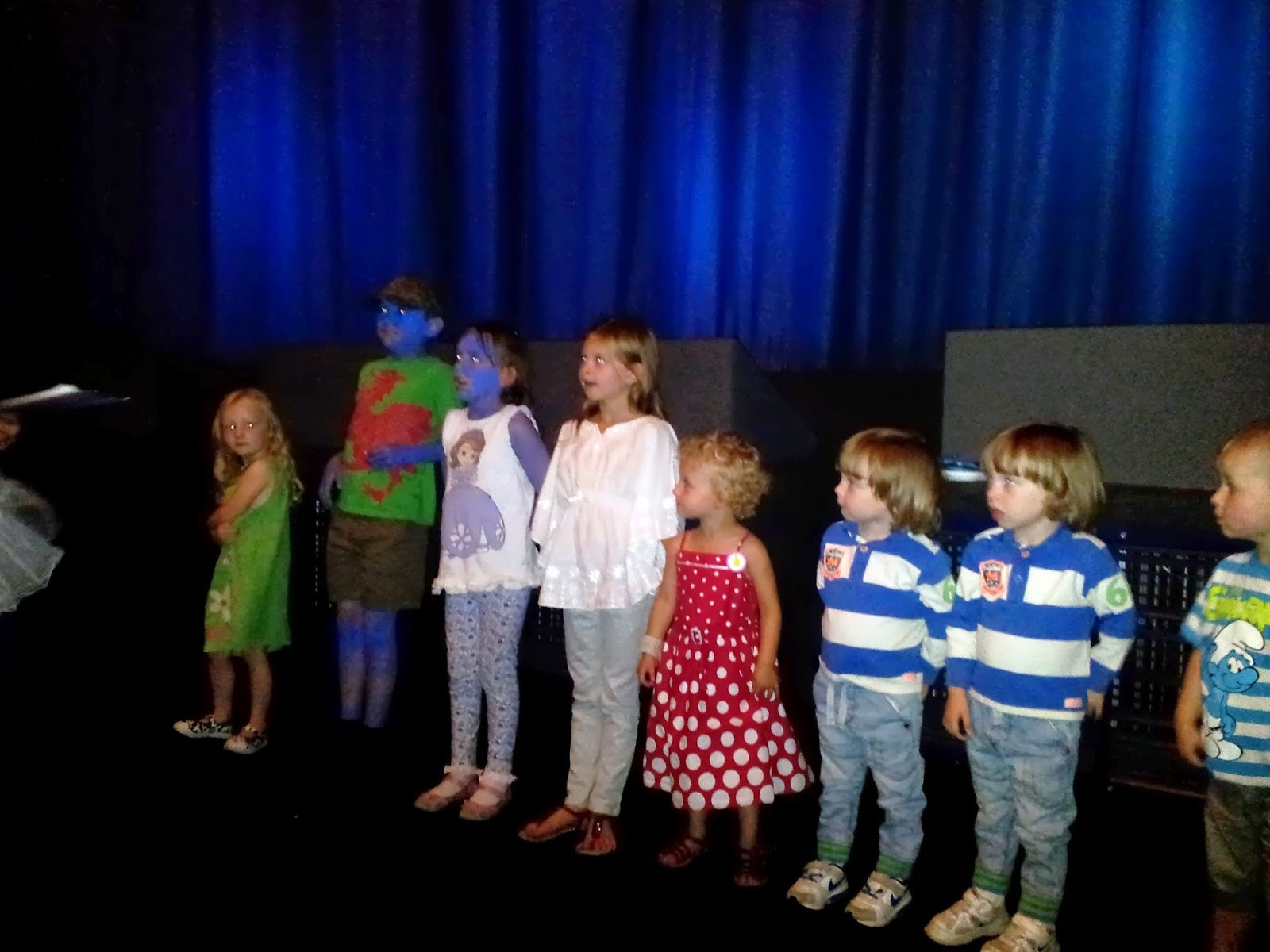 We then went on a Smurf Treasure hunt.  Rebecca won twice, however it was just for fun, not for prizes. 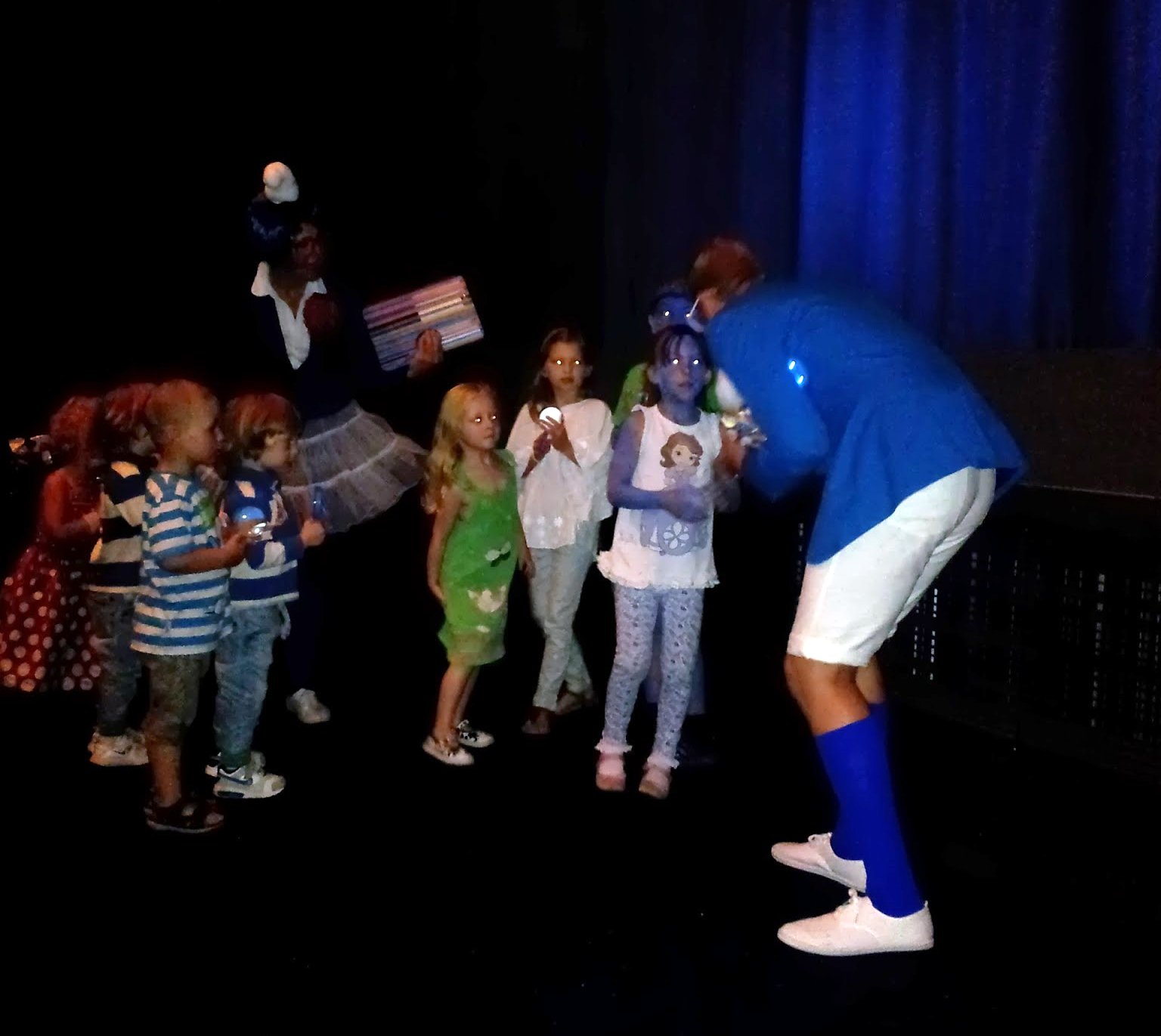 They told her that she will make a great detective when she is older.  I think she might like to become a Smurfologist too! 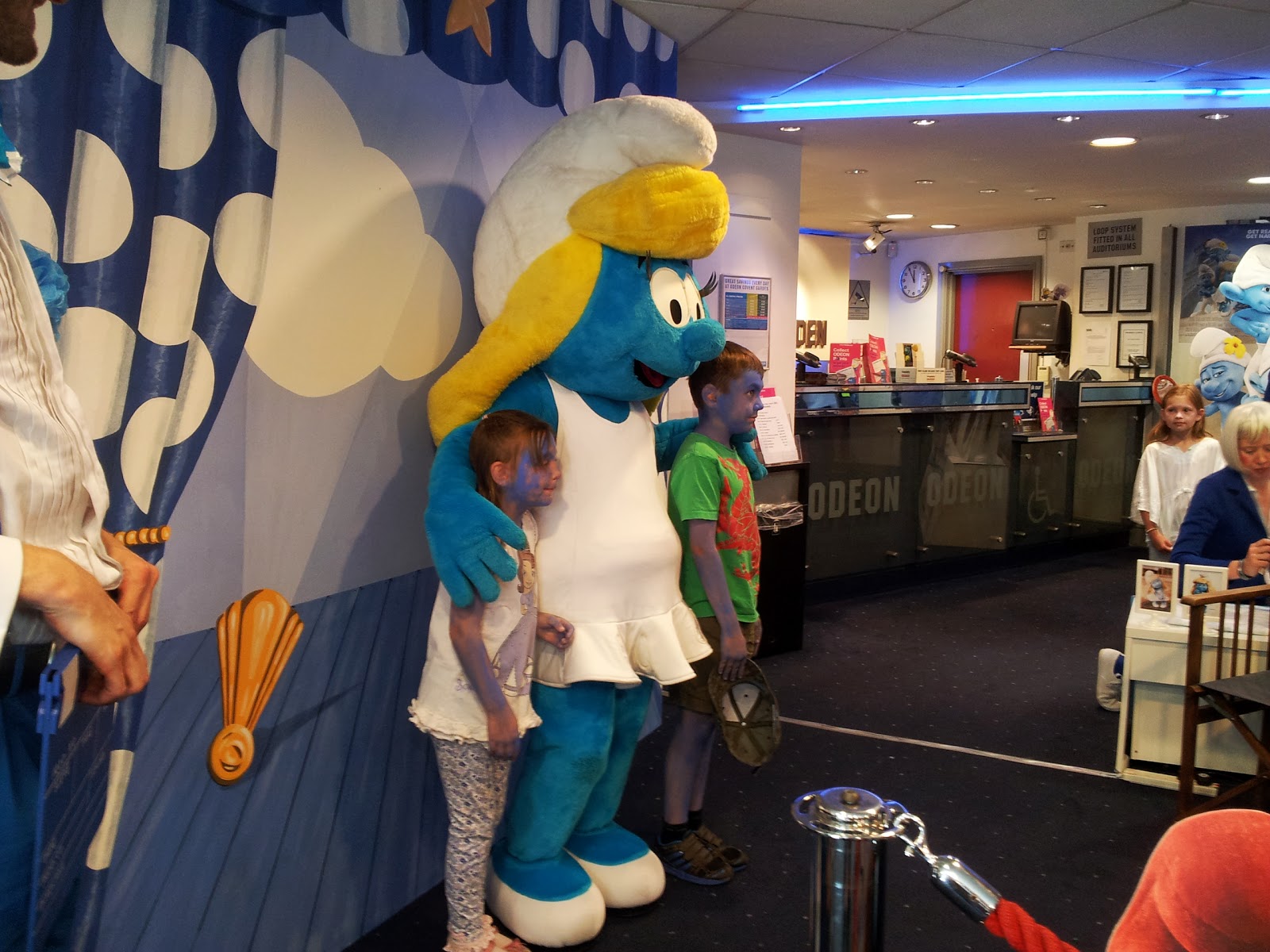 The kids had their photo taken with Smurfette in the photo booth. 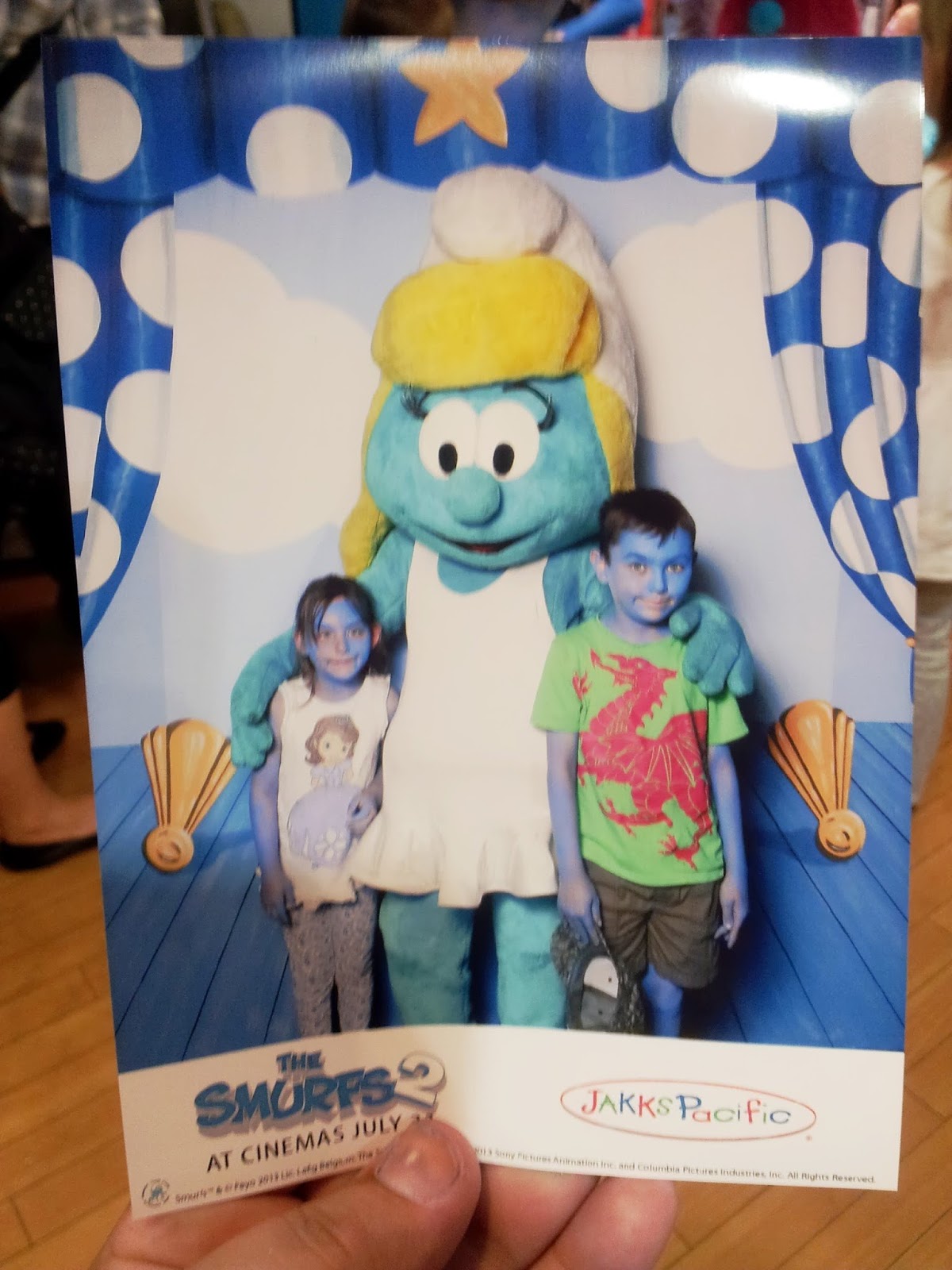 What a lovely memento of the day! 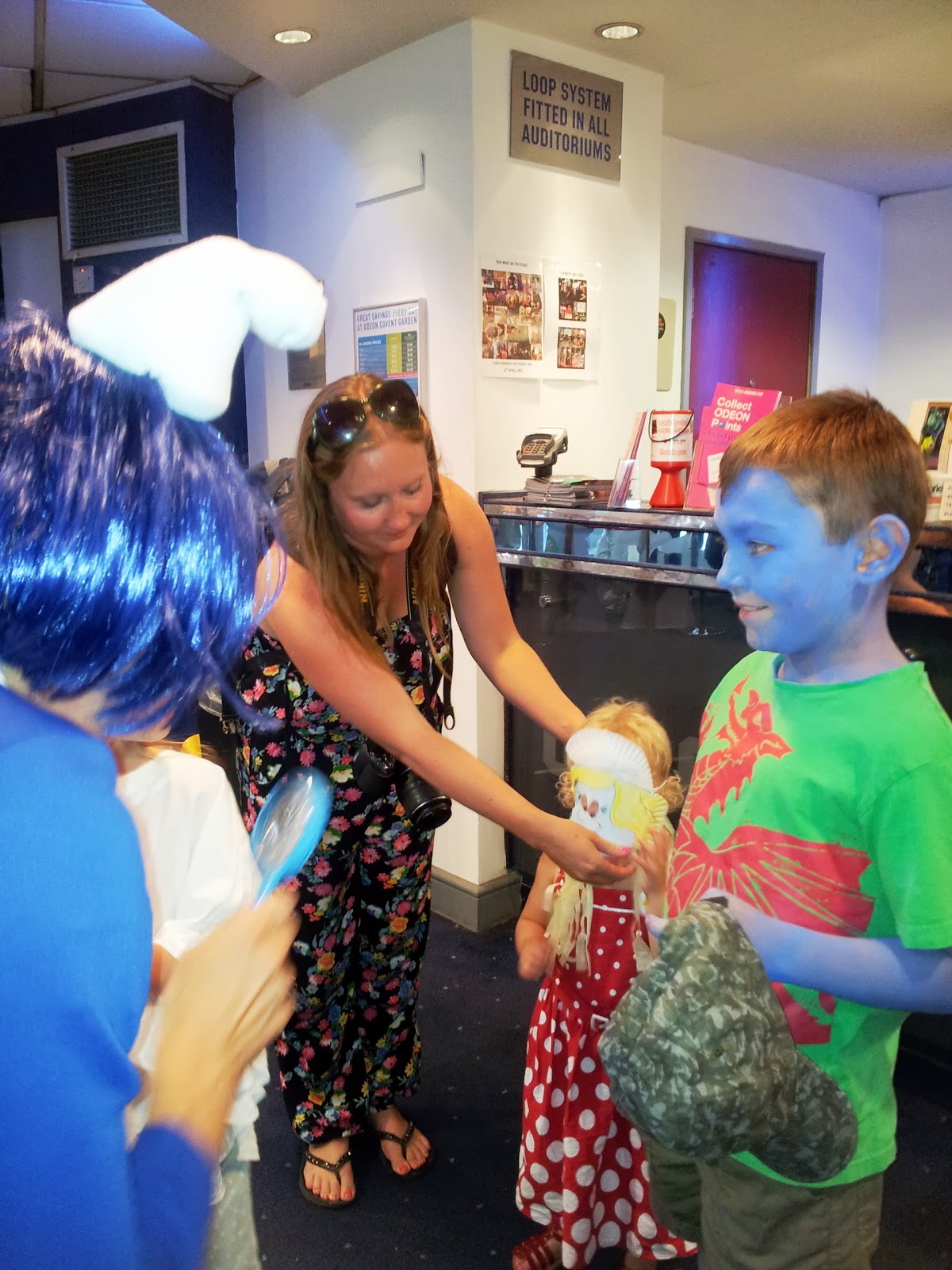 While we waited to meet Papa Smurf and create our own Smurf essence, the kids practised the Smurf Handshake again.

There was never a chance to be bored! 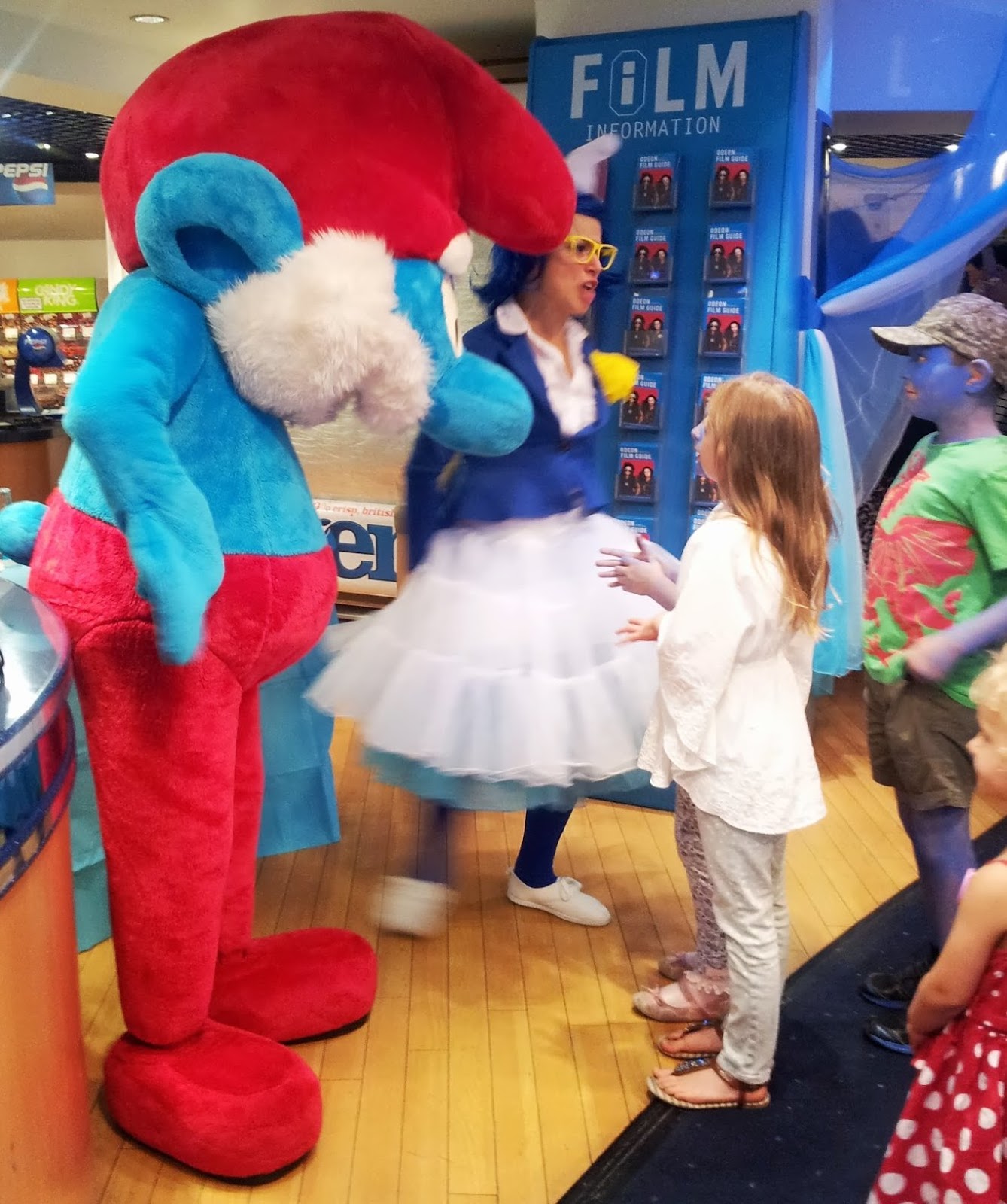 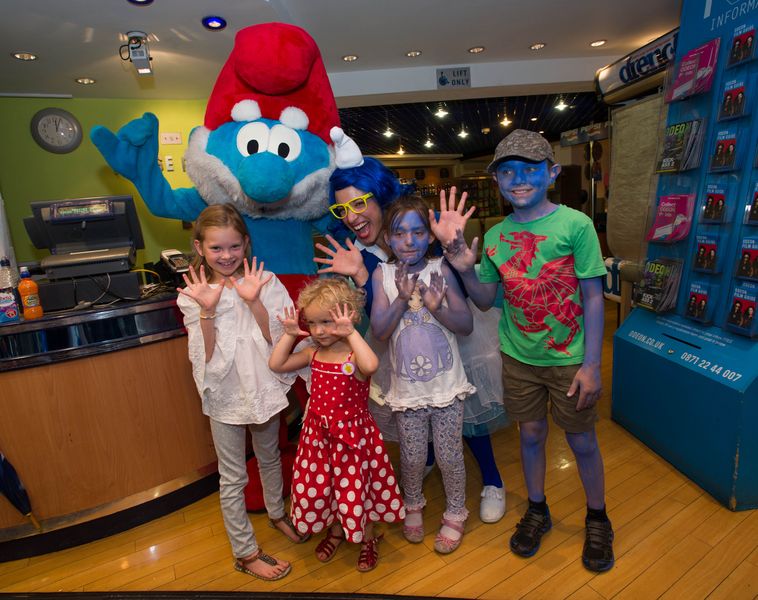 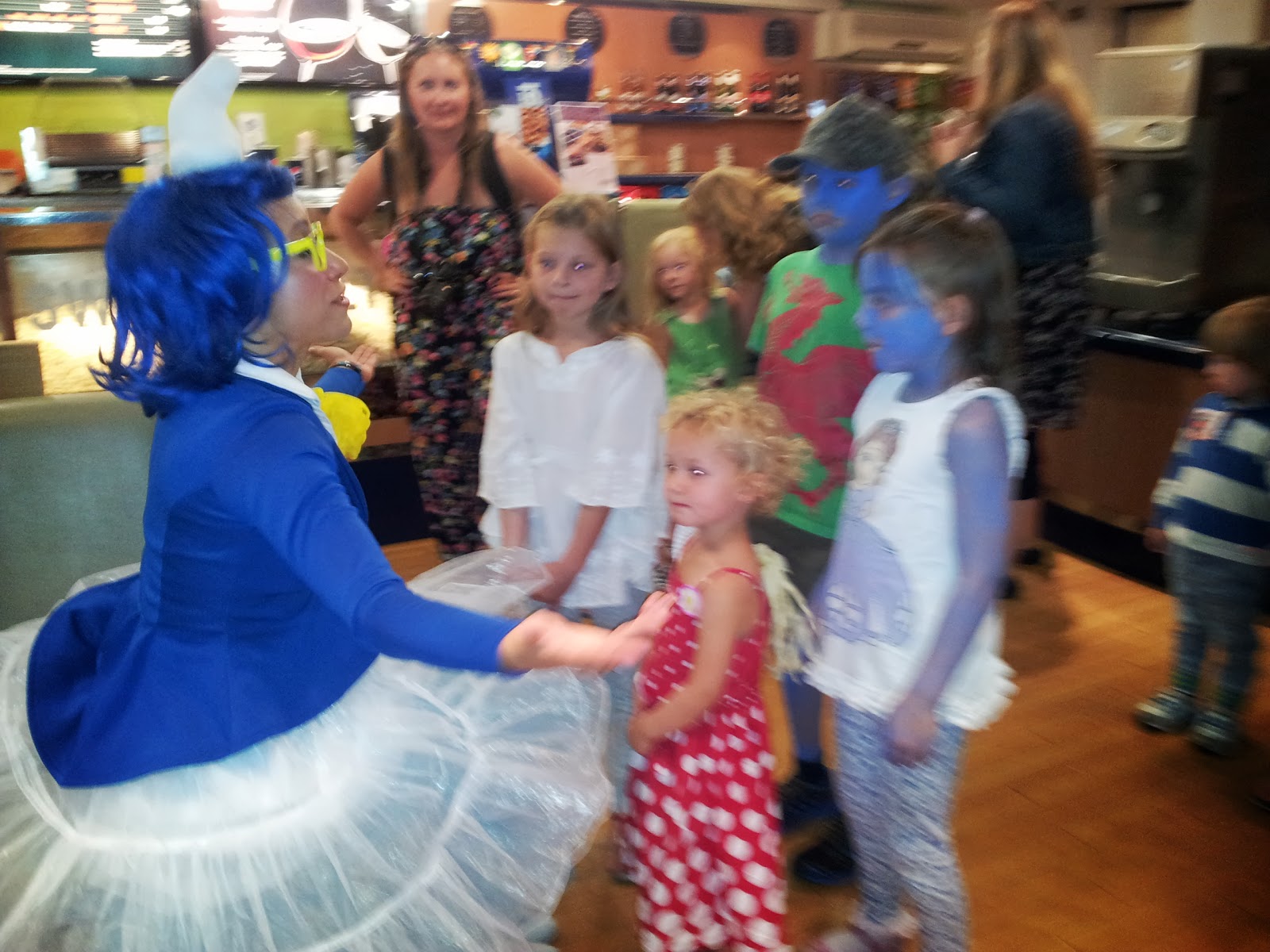 After three attempts, we finally created our blue Smurf Essence.  We were all sprinkled with some to all become part Smurf. 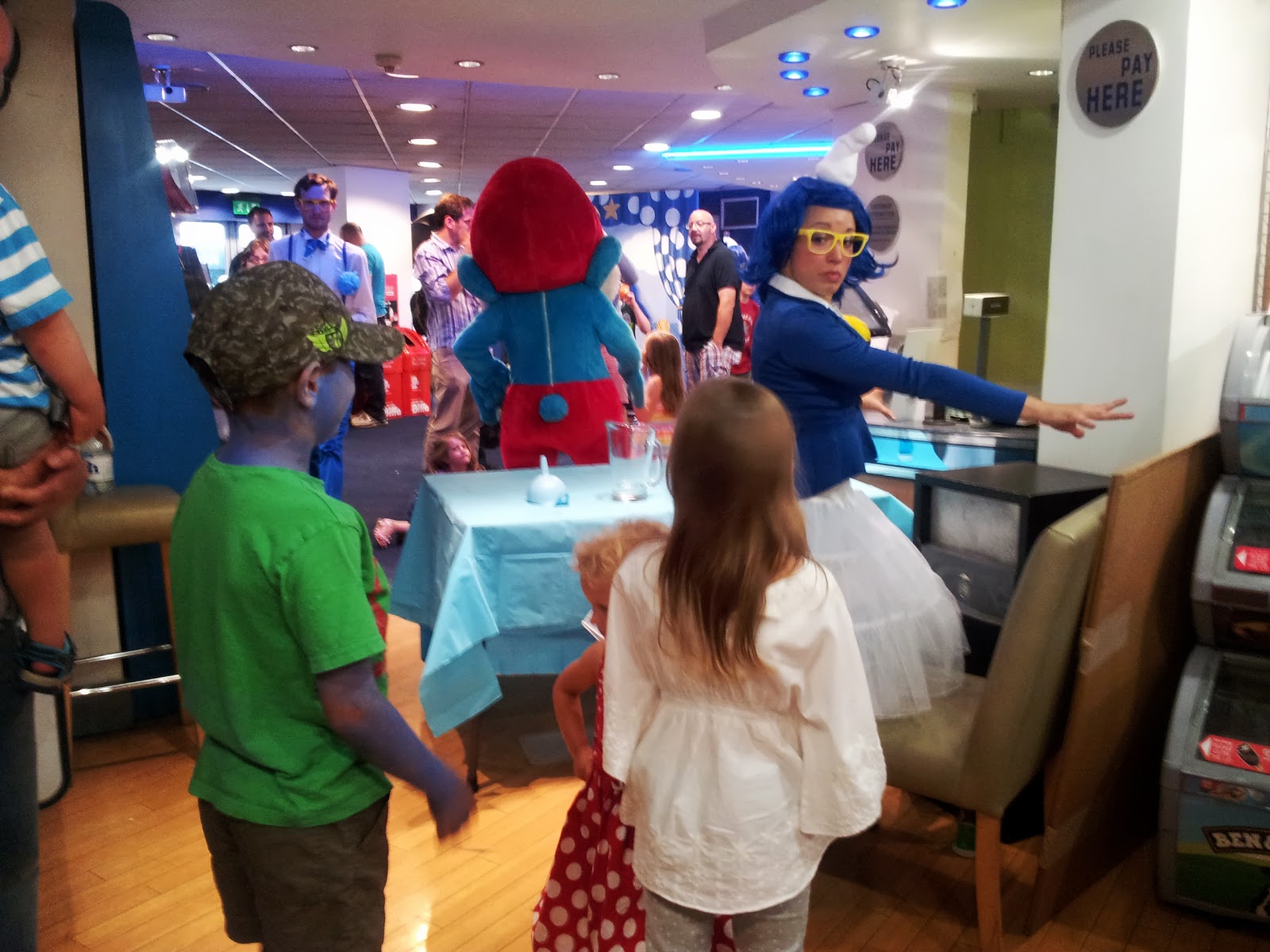 The kids repeated, “I am friendly, I am clever, I am small, I am blue.” 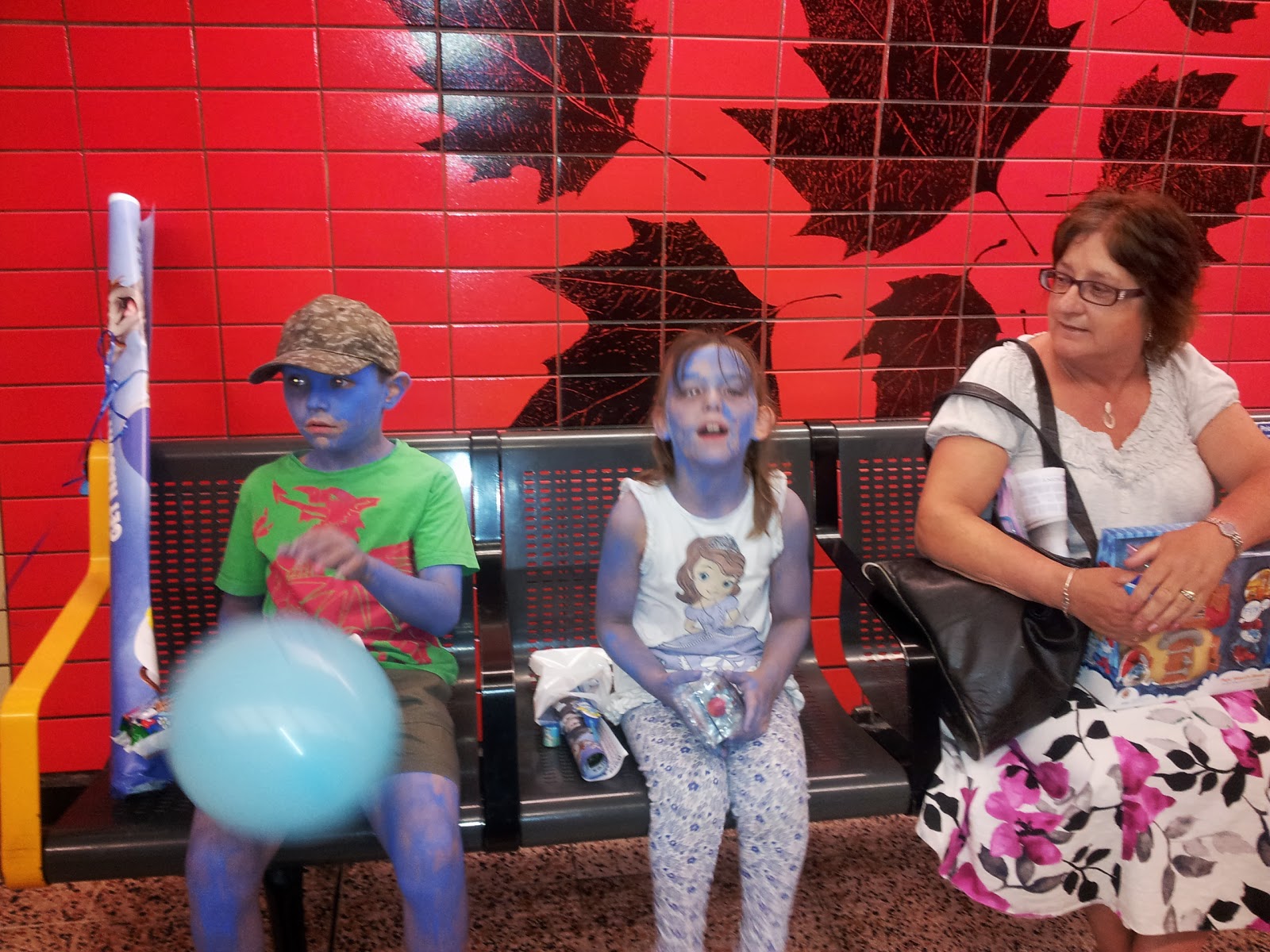 Danny won fourth place in the fancy dress competition- winning Papa Smurfs Mushroom House!  Thank you so much to Norton and Co and Jakks Toys for this lovely prize. 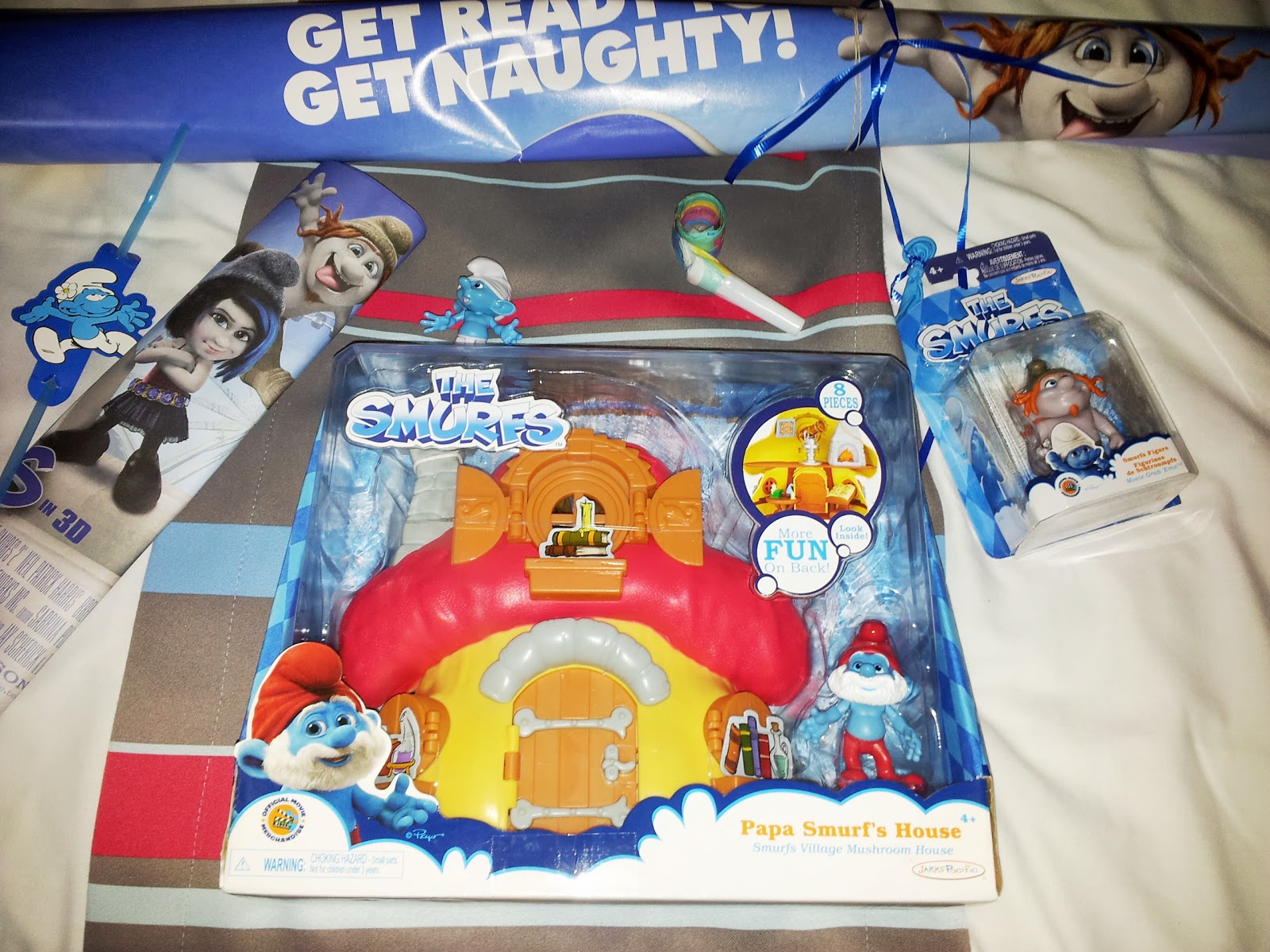 We collected our balloons, posters and goody bags and headed back to the tube.

I can’t wait to see the kids playing with all their new Smurfs Toys- blog post coming very soon!

We had a lovely day and a lovely weekend in London- thank you Norton and Co for inviting us!

Disclosure:  We were invited to a screening of The Smurfs 2 and a Smurfs Party.  We received after-party goodybags and won a toy but all opinions are our own.