I have been avoiding my blog recently.  I can’t write about happy things and our day to day life until I’ve wrote about our recent sad experience.

I always knew that Cancer Research Race For Life 2013 was going to be the biggest challenge of all my 5K races. 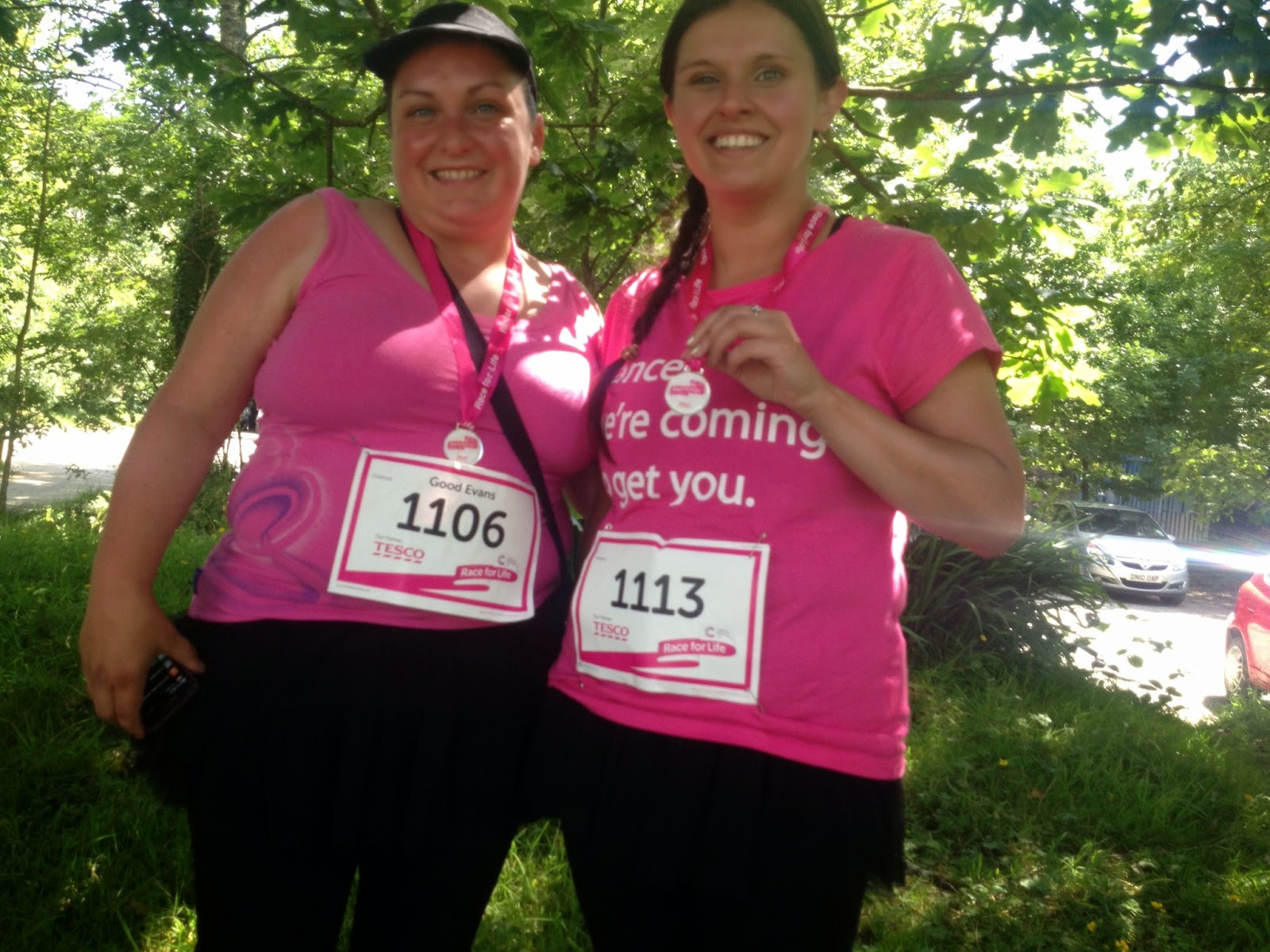 Not that any of my races have been easy- from running for Little Hearts Matter, when Danny was just a few weeks post his second major open heart surgery, to running in memory of my dearly loved dad. 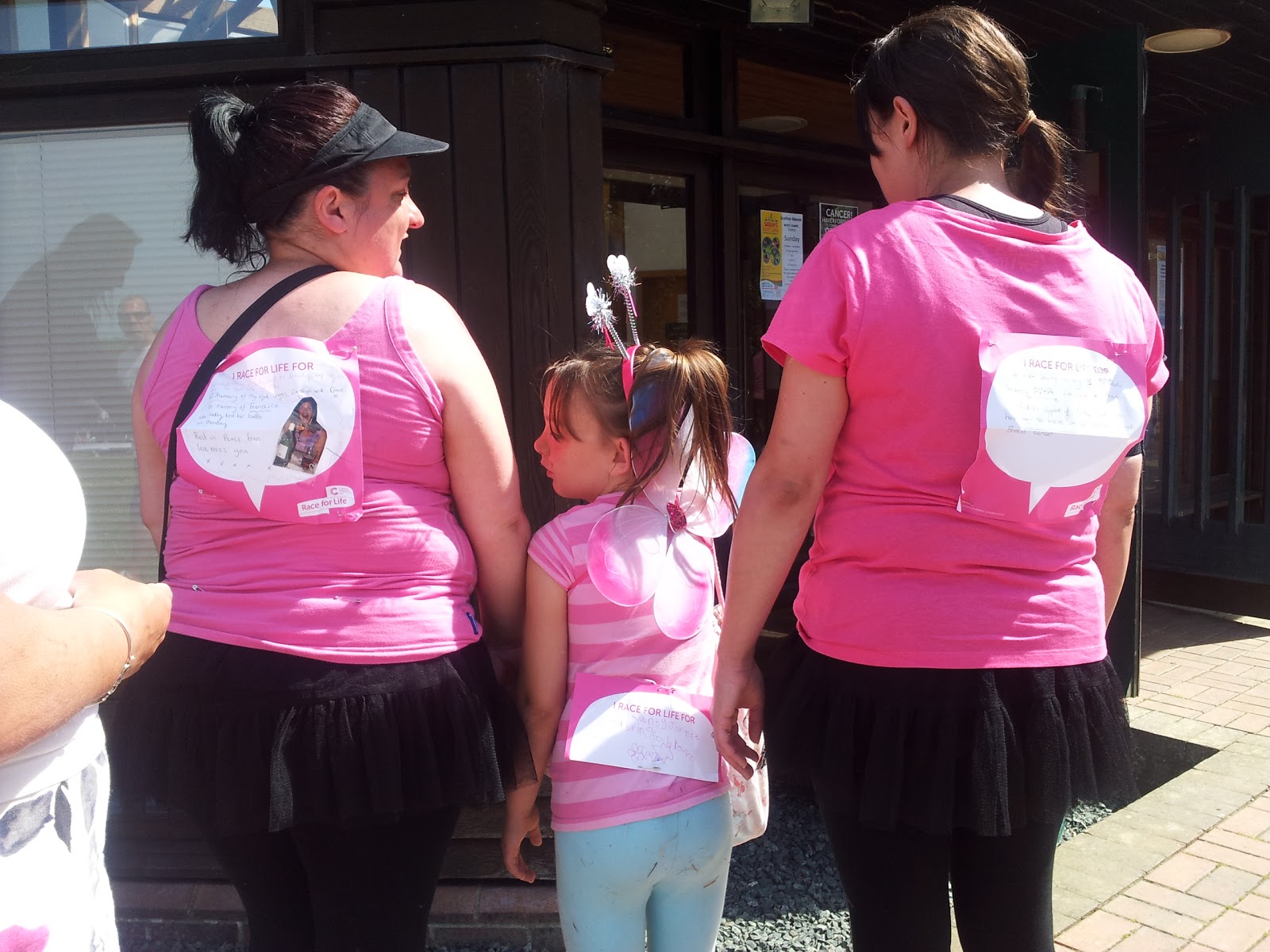 It is a sad fact that every year I find it harder to add in all the names that I am running for, both in memory or in celebration of.

This year, I was already unorganised and unprepared for Race For Life.  I run it every year, so it should never come as a surprise but once again I had not lost the weight I vowed to, kept up the training I earnestly restarted in January or even began to ask people to sponsor me!

Then, one week before the big day, I heard the shocking news that my friend and housemate from university had died of cancer.  I didn’t even know she had been ill or recently diagnosed.  I was so shocked and initially could not believe it.  We had lost contact once she left Facebook (what type of a friend am I to lose contact with someone just because they’re not on social media- we used to write and ring each other).  I had kept loosely up to date through statuses, locations and photos on her husbands profile, but in reality had no idea what she was going through.

A few weeks ago she was told that she had about eighteen months left to live.  With this news, she planned a special family holiday with her husband and two gorgeous little boys.  They had an amazing time and Fran looks well in most of the pictures.  In others, if you look deep into her eyes, you can see how she was being strong, holding up for her boys maybe even secretly grimacing in pain.  The holiday seemed to take every ounce of energy she had left from her and not long after she arrived home she went into her local hospice, where she was lovingly cared for until she peacefully passed away. 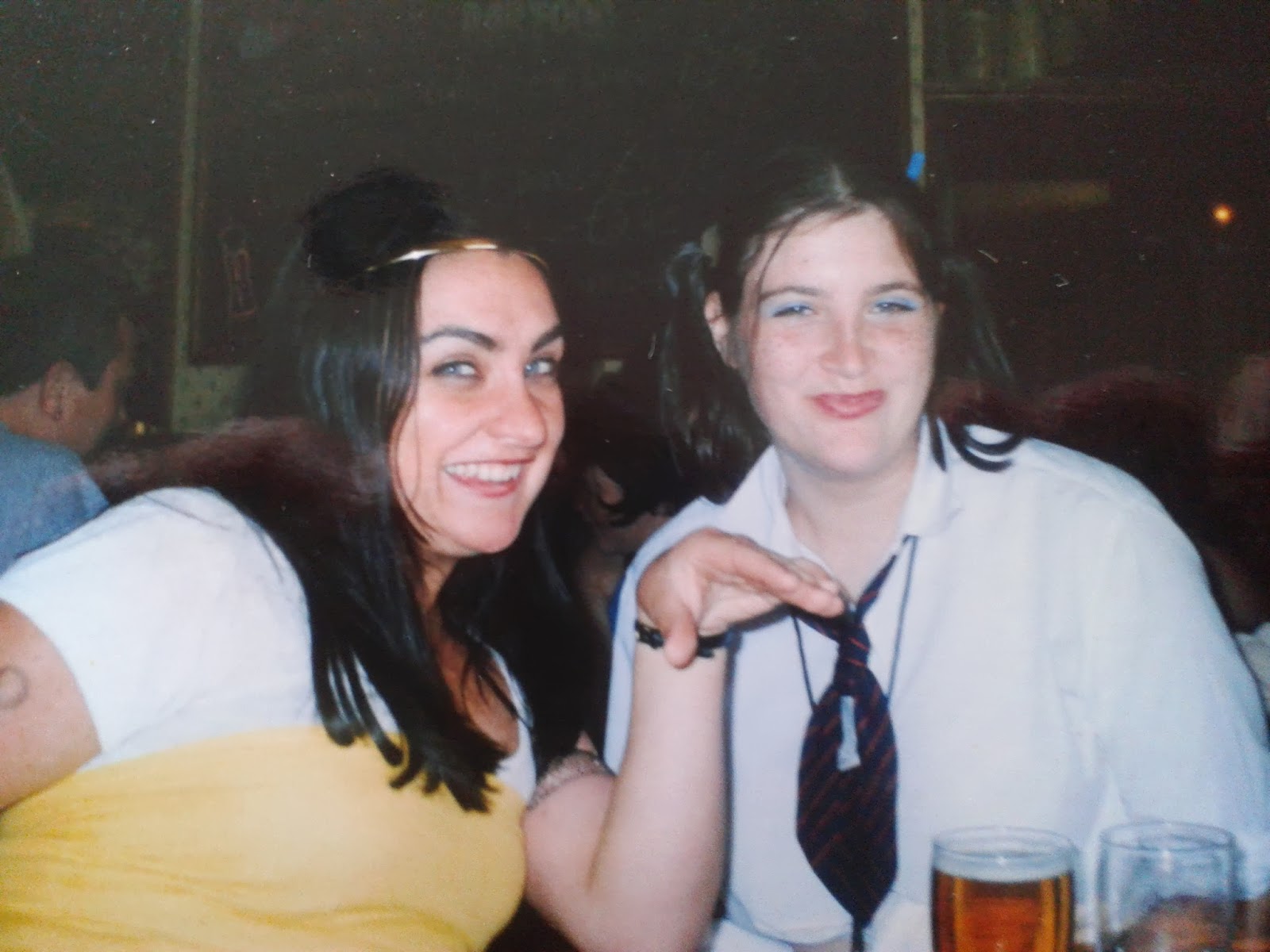 Even though I had not seen Fran for a while, her death has affected me so much because of the years spent living together, we all became like sisters.  I miss all of our housemates lots and even though I live far from them, think of them so much and always thought that once our kids had grown older we’d have more times for reunions.  I’m so sad that I missed out on that opportunity with Fran. I got to see the rest of my old housemates, but under awful circumstances.  It was such a sad and yet uplifting day.  When someone has been joyous and good humoured their whole life, this comes through in their memorium.  During her funeral service, when I was not sobbing so hard that my belly hurt, I was laughing, at the wonderfully happy memories of Fran.   The Vicar knew her and her family well and that shone through.  He even mimicked her clenched fists, “Yes!” attitude, I will add that she also did this action accompanied with a “Come on!” to really encourage us.  She was such a happy, kind, enthusiastic and passionate woman.  She was a perfectionist and her only “bad point” if you had to name one, was she could be a bit “stressy”.  But even this was in a good way and she could poke fun of herself for being like this.

Her sons are a legacy to her.  Her baby has the most beautiful, big, brown eyes that I have ever seen and a cheeky grin, her little boy is so handsome, happy and full of Fran’s energy- she was always moving even while trying to stay on the spot!  She was full of love and was such a loved person.

Her past pupils and Headteachers at the schools where she worked said wonderful things about her.  She changed many lives for the better.  I heard so many times people saying how proud they were to have known her.   I just wish we still had her.

So, the week before Race for Life, I was in a numb, shocked state.  Waking up feeling like it’s a normal day, and then being hit by the realisation that “Fran is dead”; seeing my own children and sobbing, thinking of two young children now without a mum; having to stop and take time out throughout the day to picture Fran in my head, hear her voice, to make sure that I never forget.

The night before I was tearing apart my bedroom looking for running shorts or leggings as I only had joggers ready and it was too hot for them.  I was getting desperate until I came across my leggings, tutu, a white feather and an envelope addressed from Fran.  I have to sit down one day and reread all my letters from her.

I dreaded having to write the back of my running number.  It was another ritual that made it seem more real. 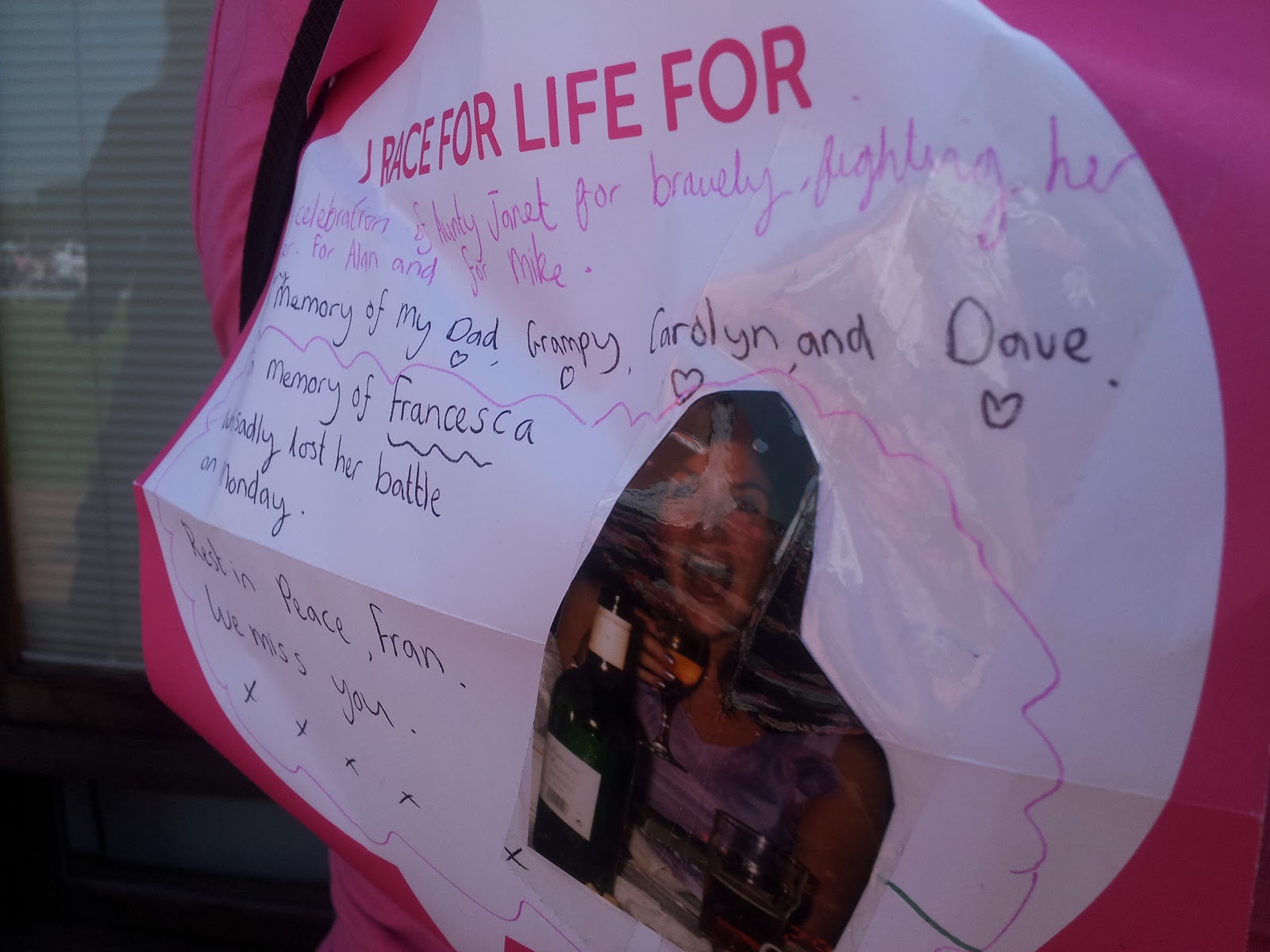 But we did it…on a blistering hot day, with no breeze… we ran Race For Life.  It was Rebecca’s second race and she did really well in the heat.  We had to stop and walk while we made sure we drank as we didn’t want to become dehydrated along the way, but she ran when she could…really fast actually and we were chasing her to catch up!  I’m so proud of her. 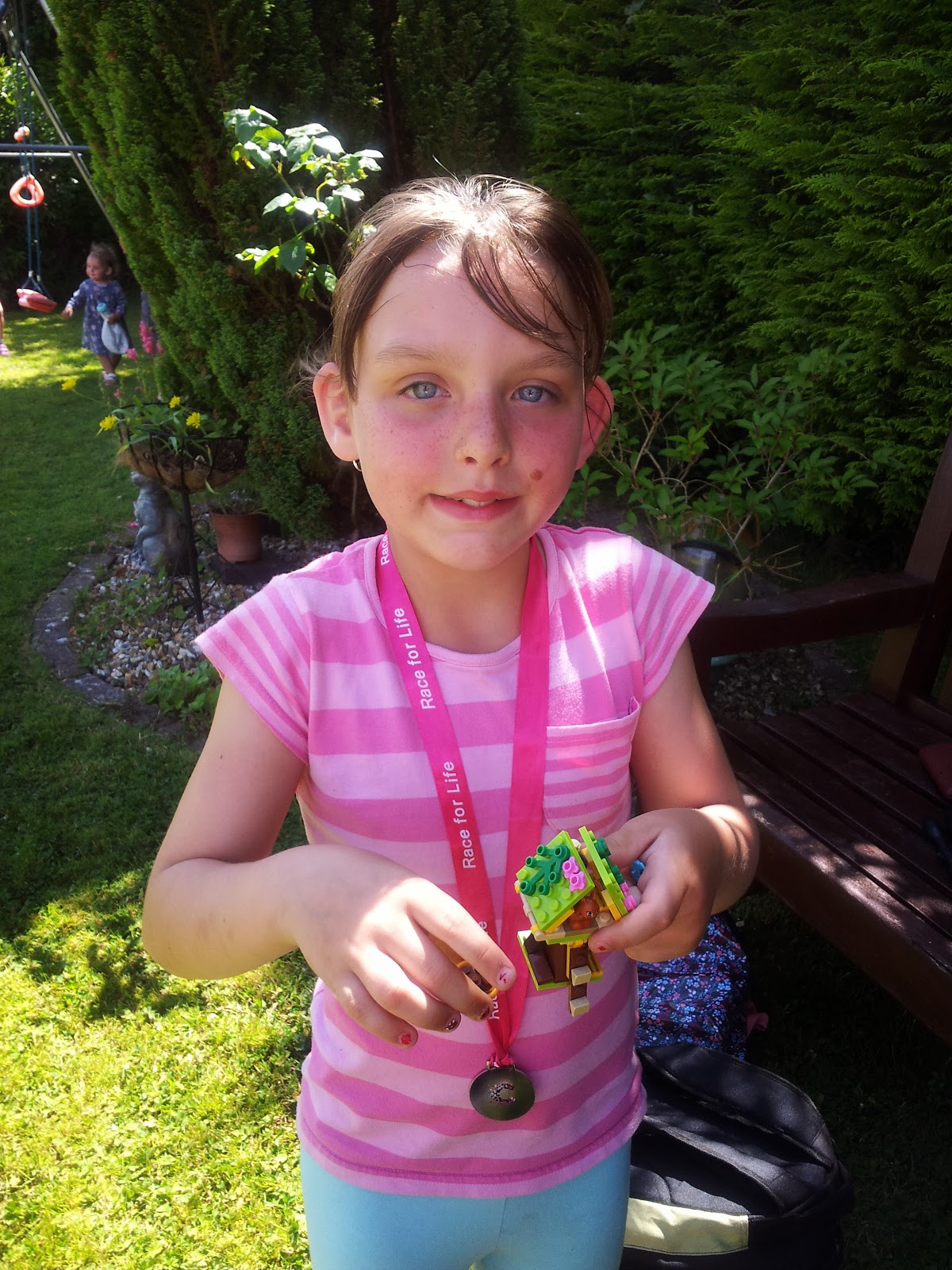 We finished, collected our medals and caught up with Mum, Jo, Dave and the kids.

We were so grateful to receive our bottle of water from my Race For Life Sponsors, Aqua Pura.  They also have a lot of information on helping keeping your family hydrated on their useful website.  Very handy during this spell of hot weather.  I was pleased to spot a competition to win a Camper Van on my bottle.  There is also an exclusive competion for Race For Lifers, so make sure you enter your Race For Life URN here to be in with a chance of winning a week long holiday in a camper van. 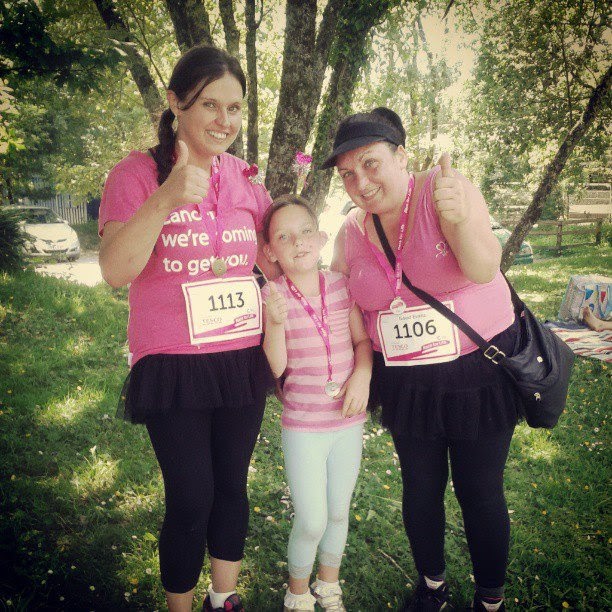 The kids had a picnic and a play in the park, we temporarily lost Caitlyn and had a panic- as you do!  She was found, all safe and well, not even far from us of course! 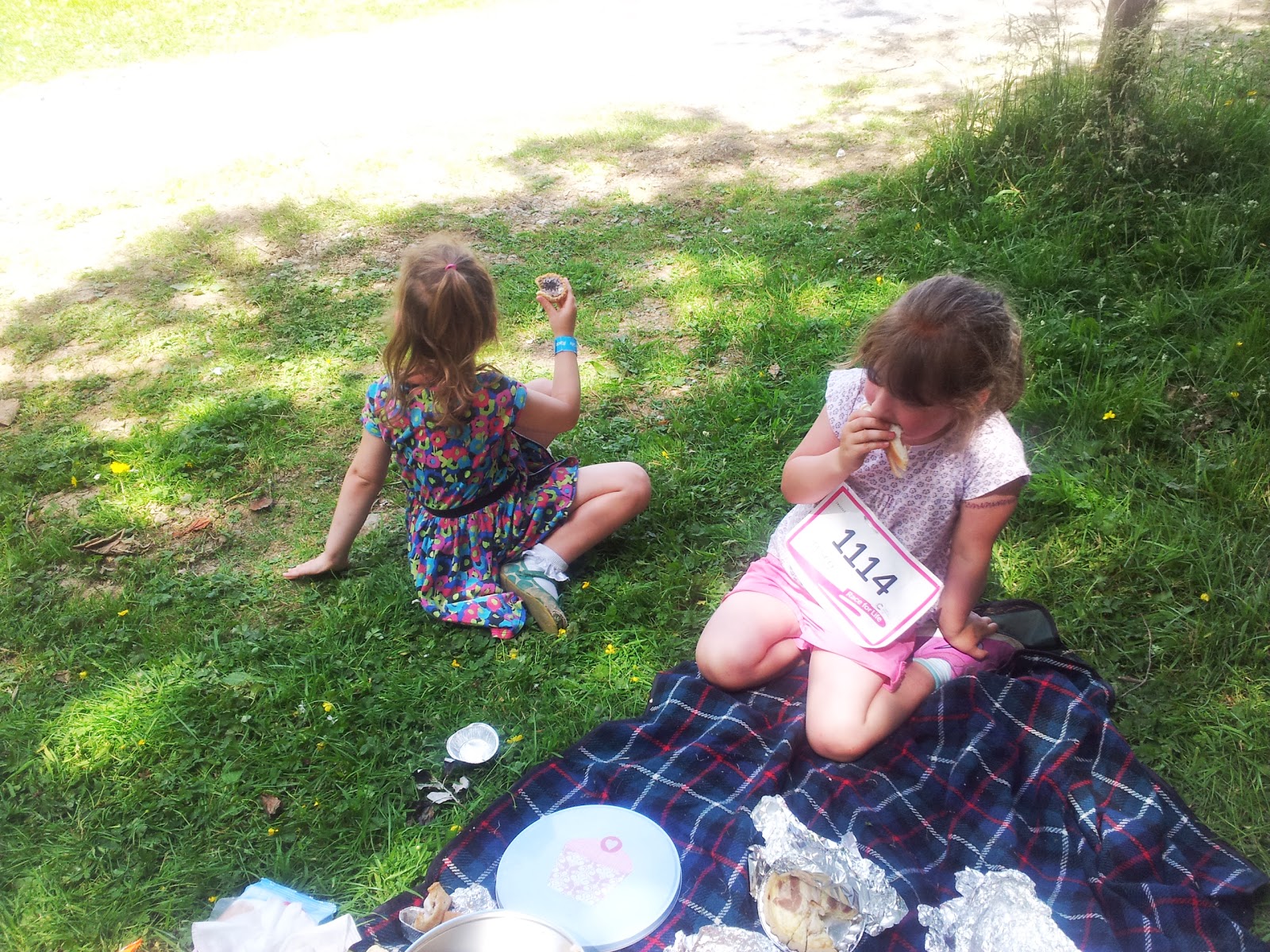 Then we went over to mums’ for a lovely barbecue and lots of family games. 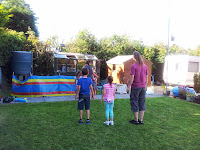 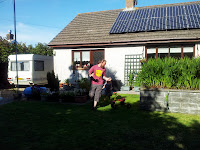 Hugging our kids, just because we can. 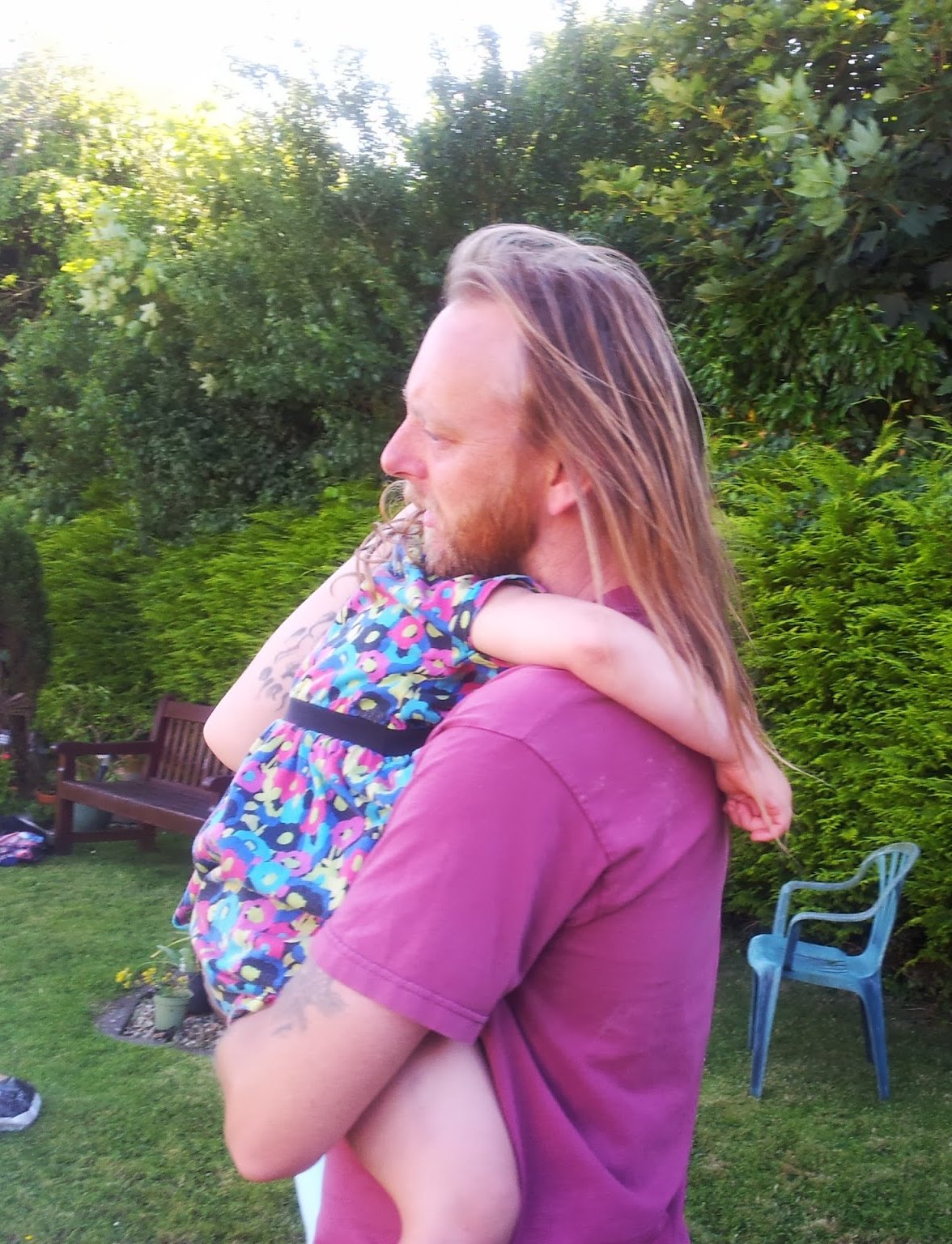 Then we spotted this wonderful site down the Rath.  Yarn Bombing has hit Milford Haven, my local town!  Amazing. 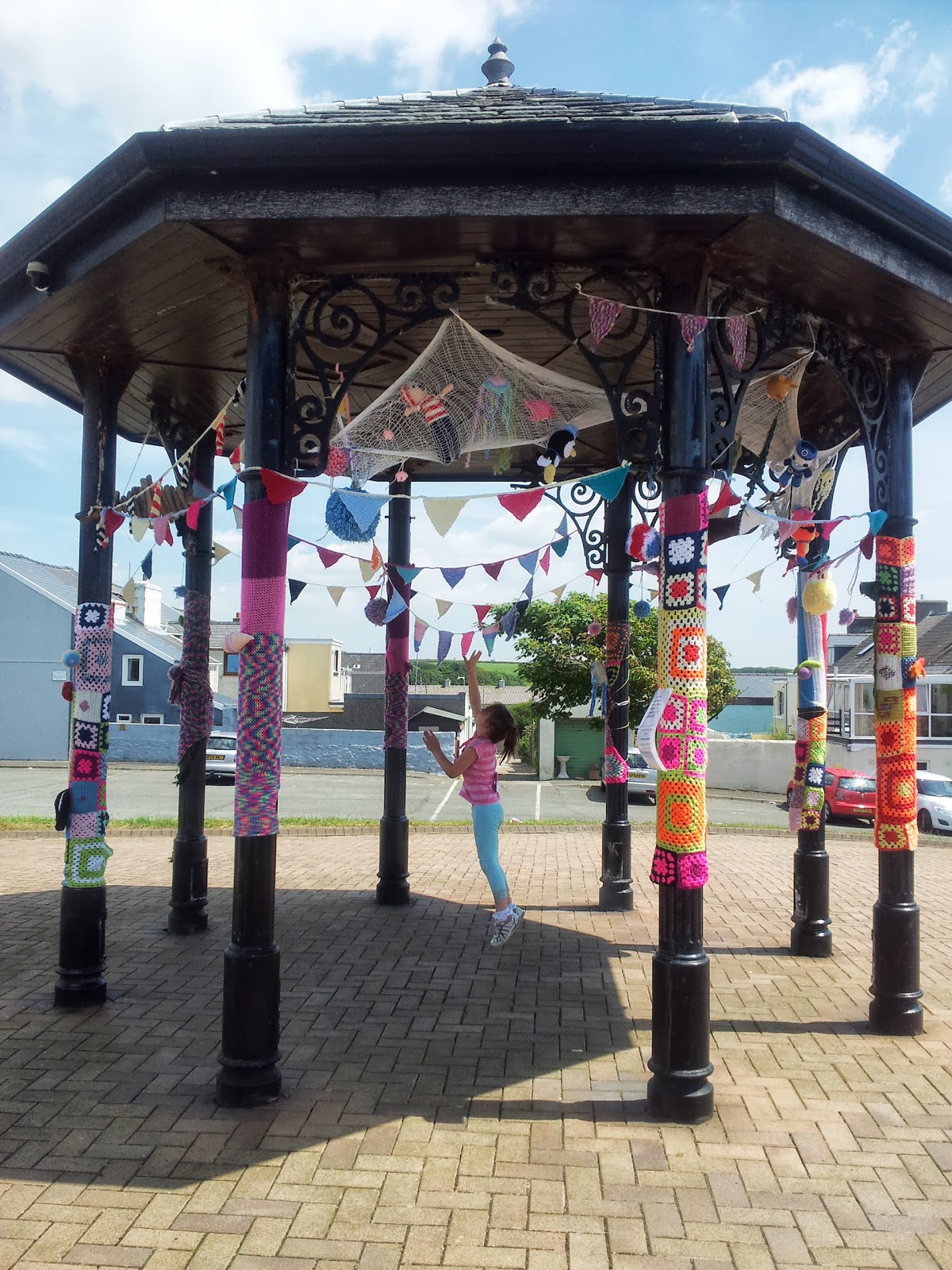 It really brightened up the bandstand and put a smile on our faces. 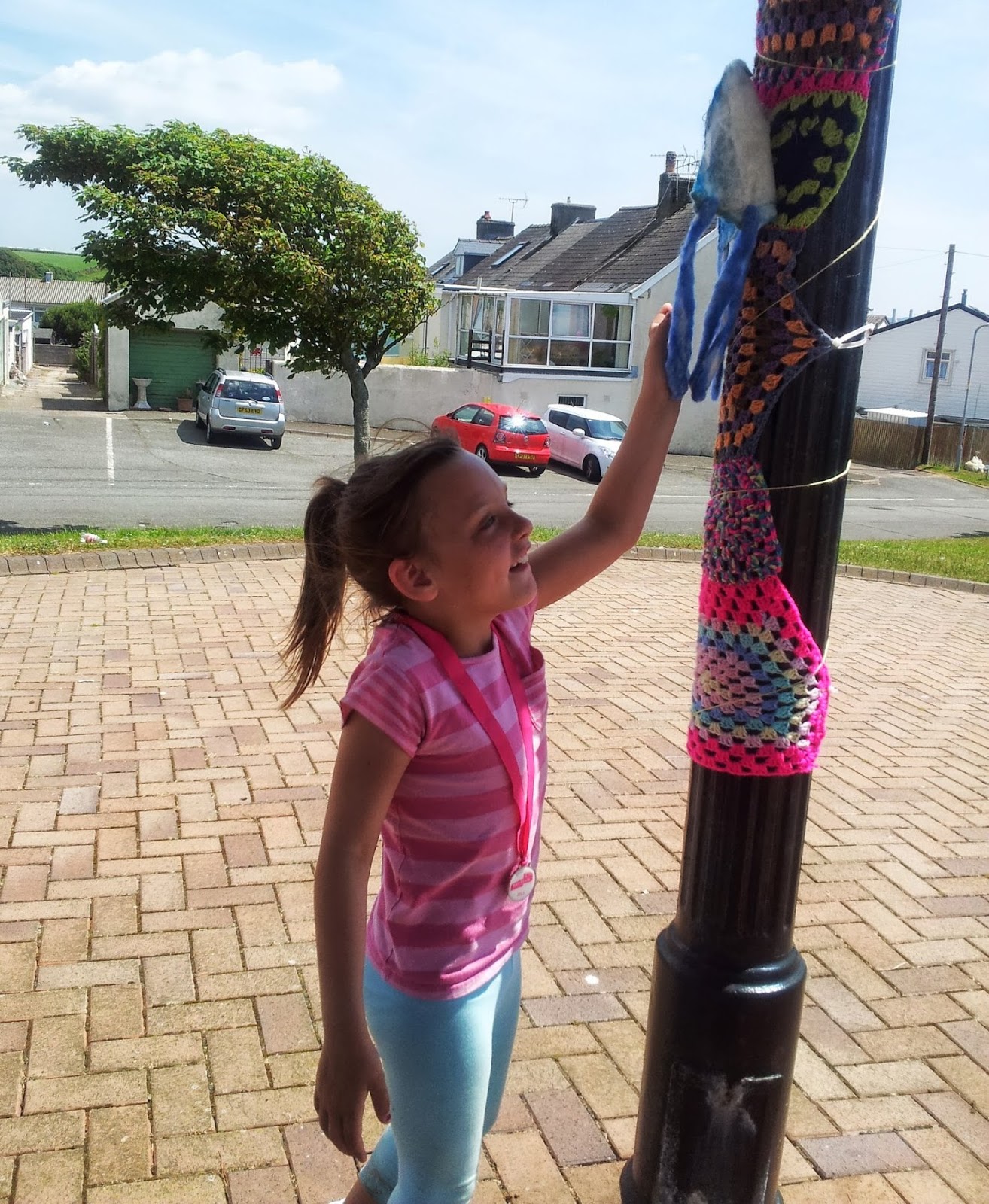 So, I did it, along with my sister Ceri and daughter, Rebecca, we ran Race For Life 2013, for my friend, Fran, my Dad, Dave, and for everyone who has lost their life to Cancer.

The “Jog On, Cancer” and such signs placed around the course really inspired us to keep running, far more than the distance signs this year!

If you would like to sponsor me you can do so by clicking the badge below.

Life goes on and we learn from each other.  Fran is still everywhere, her energy and inspiration will never leave.  We will never again hear the Charlatons, James, Stone Roses or even the Beatles without thinking of her.

On the morning of Fran’s funeral, another sunny day, one of our close friends from Uni who Fran had been a bridesmaid for could not make the funeral.  She had gone into labour two weeks early and given birth to a gorgeous little girl, who has the middle name Francesca.  Fran would love this.  Her best friend from Halifax was also carrying a lovely baby bump and Fran’s own sons were running around full of life.

Aqua Pura, sponsors of Race for Life, very kindly paid my entrance fee for Race for Life this year and sponsored me!  Thank you so much Aqua Pura!  It is a brilliant cause of which I have been reminded so much this year.