On Monday we travelled to Cardiff for Danny’s Cardiac Check-up.  We knew that we would not be home in time to pick Rebecca up from school and had no one available to collect her for us so she had to come with us.  This is one of the many ways being a sibling of a brother or sister with a medical condition can affect you.

Monday was a lovely day, pretty flakes of snow were falling from the sky but not actually sticking and causing problems on the road which would not have been good for us with our long journey ahead.


When we arrived at Cardiff it was so cold, between getting out of the warm car and walking to the Hospital felt like being in the Arctic!


Here are Danny and Rebecca in the Concourse, and Danny looking at a plan of the hospital. 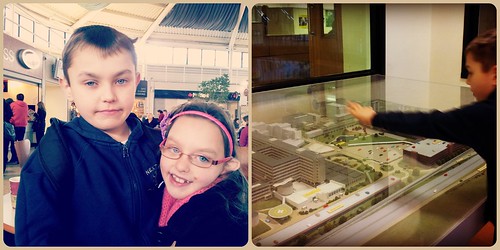 We had a quick lunch then went to wait for Danny’s appointment.  We played table football.  Even playing two or three against one -nobody can ever beat Daddy!
(I’m starting to suspect that all those plectrums in his pocket are really for propping up the table in his favour!) 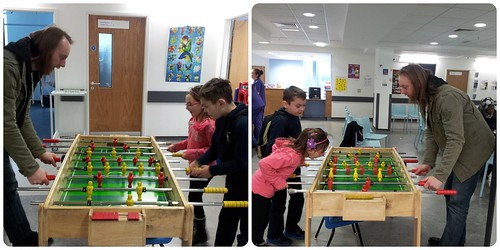 I love Table Football when I get the chance to play it.  There is one at Mum’s house but I’ve not played it in years.  It really draws everyone’s competitive spirit out in a good way.


Another great thing that they have in Hospital Waiting Rooms- The Starlight Foundation  Fun Centres.  Danny loves it when there is a working and plugged in computer game.  Even better when it has two player games and Daddy can join in too. 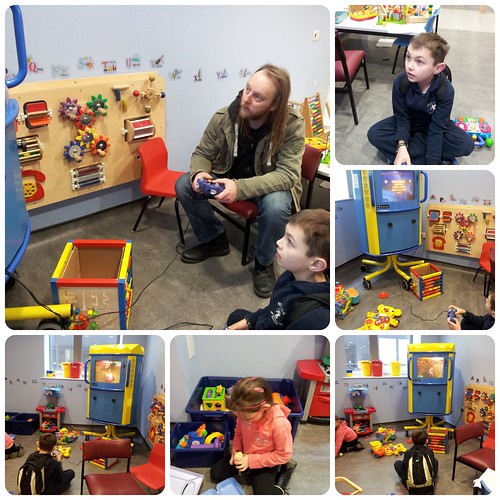 Rebecca entertained herself playing with the toys and when a young boy came in, Danny very politely asked if he would like a go on the Starlight Fun Centre and passed the remote to him.


As well as equipping waiting rooms with the Entertainment Units and Fun Centres, they have also been using money that is raised for equipping Children’s Wards with Fun Centres that kids can have by their hospital bed.  Such a lovely idea as distraction is sometimes the best pain killer that there is!


When it was our time to be seen, Danny was weighed and measured.  His Oxygen SATs were 97% which is really good for him.  Before his third operation they were a lot lower.


Then Dave took him through to have his ECG.


Then we all went through for his Echo.  I took a quick photo while we were left in the room!  Danny is so calm and still during his scans.  The Doctor had not looked at a Hypoplastic Left Heart before so it was a challenge to find all the parts that she wanted to see and fully understand Danny’s re-plumbed heart.  She needed a colleague with experience in this condition to look to just to reassure her that she had taken the correct pictures.  This was completely understandable, but meant that Danny had to keep still for a very long time which he managed to very well. 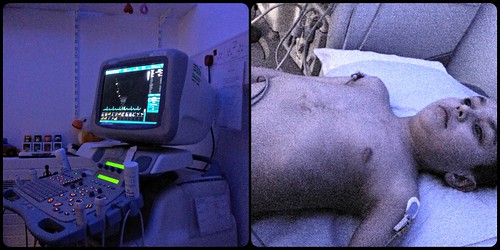 The hospital had planned to take Danny’s bloods too, but they realised that he had already had a longer than normal appointment, so they said we could make the appointment at our local hospital, Withybush instead.


He is also going to have an Exercise test if they have the necessary equipment, so we can check his current levels of Cardiac fitness.


They were pleased with his heart function, although his stent will need opening up soon, which we have known for a while.


After spending all day at hospital, there’s only one place your parents can take you: 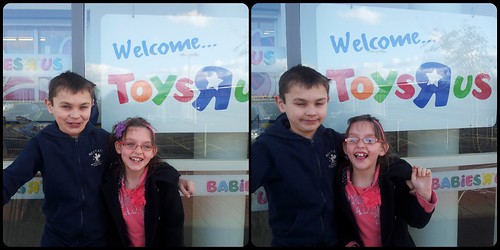 Toys R Us of course!


Danny and Rebecca had vouchers to spend there from Tots100 and MoneySupermarket Competitions.  Danny chose a new Skylander Giant and Rebecca chose a new doll.  We also bought Caitlyn a Leappad game and Isabelle a fun Picnic Interactive toy.


I’ve also chosen the new stroller I want to buy for Isabelle, so I’m saving up for that now.


Then we stopped at the services for our tea.  We were captive customers and went to Burger King.  I used to work at Burger King and loved their food.  In my recent experiences, they have gone downhill and I won’t be choosing to eat there again (this is BIG news to all who know me!).


We then spotted these little gems, Krispy Kreme Doughnuts.  I have heard all about them, but never tasted them before, so we decided to treat ourselves to a box! 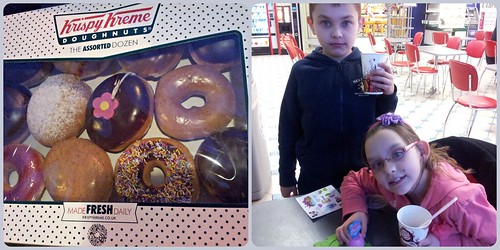 I wanted to eat one there and then, but Dave convinced me it would be more special to wait until we got home and enjoy them with a cup of coffee.

So over three hours later, I had the one with the flower on.  It was lovely!

We were all very tired from our long day, so it was then straight to bed for the kids and I even managed to convince the kids to be school dinners for the day so I could get out of making lunchboxes!

It is nearly the middle of March now, can somebody tell the World to slow down, please?

How do you keep your children amused while they’re at hospital?