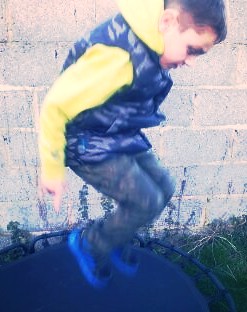 Danny is off tomorrow for a couple of days away at a school residential.  It was touch and go for a while if he’d be going as he hasn’t been having the best time in school recently.

Physically, Danny is doing really well.  We are so lucky.  While the operations he has had can not fix his heart, they have re plumbed it so he can lead a relatively normal life.  He runs around, plays, does gymnastics, swimming, fencing, archery, abseiling…our motto is half a heart not half a life.

Emotionally however, he is struggling.  One part of him has survivors guilt- he asks why some babies and children with the same condition as him have died.  He says it makes him feel like he shouldn’t be here.  When he tells me this, I cry, which then makes him feel guilty for upsetting me.  I don’t want him to feel this guilt and to stop opening up to me, nor do I want him to feel like I wouldn’t be sad if he wasn’t here.

Another part of him feels anger.  He asks, “Why me?  Why am I different to all the other children?”  We used to tell him that he is special.  We also remind him that he isn’t the only one, he has other friends that we have met with the same condition.   He now replies that  if being special is having operations, clicker tests and being so tired then he’d prefer to be normal.

I can’t say I blame him.

We are positive.  We remind him that he is a strong, brave, fighter.  Of course he should still be here.  It’s really unbelievably sad that others aren’t, but those of us lucky enough to be blessed with life should enjoy it and appreciate it.

I try to always plan nice things for him to do and for us all to do together.  I want him to have things to look forward to and lovely memories to look back on.

Sometimes, however, they are not enough and I know that as he grows older, it is normal for him to feel this way and I have to arm him with strategies to cope with his feelings.  It is hard enough for adults to deal with permanent lethargy and a serious illness, but they are usually allowed to moan and dwell as much as they want.  On the other hand, being a child, people don’t like to let you feel sad, they tell you to cheer up, stop crying, “It might never happen”.

Although, if we have never been in this position as a child ourselves, how do we know how he should be feeling.  When I was Danny’s age, I thought it was unfair that other children had televisions in their bedroom, so surely it’s not selfish or unreasonable of him to wish he had a normal heart?

I wish he had been born with a whole heart too.

Anyway, we are lucky that his school are really supportive and they all really wanted Danny to come on the trip with them.

He is excited now, and a carefree child once more looking forward to a few days packed full of fun activities, such as horse riding, skiing, go-karting and even a disco.

I’m going to miss him so much, as will his Dad, younger sisters and family, although we will also be so happy and pleased for him that he is getting this opportunity.  I went on the same trip when I was his age and I would have been sad if he had missed out.  It’s an important milestone that I’m sure will be a really positive experience for him.

When he has a blip emotionally and therefore behaviourally, he is so so hard on himself.  I wish I could convince him that with everything he has had to cope with up to the age of nine he is actually an amazing, wonderful boy who is doing  really, really well.

I’ll let you know how he gets on when he returns home on Friday!