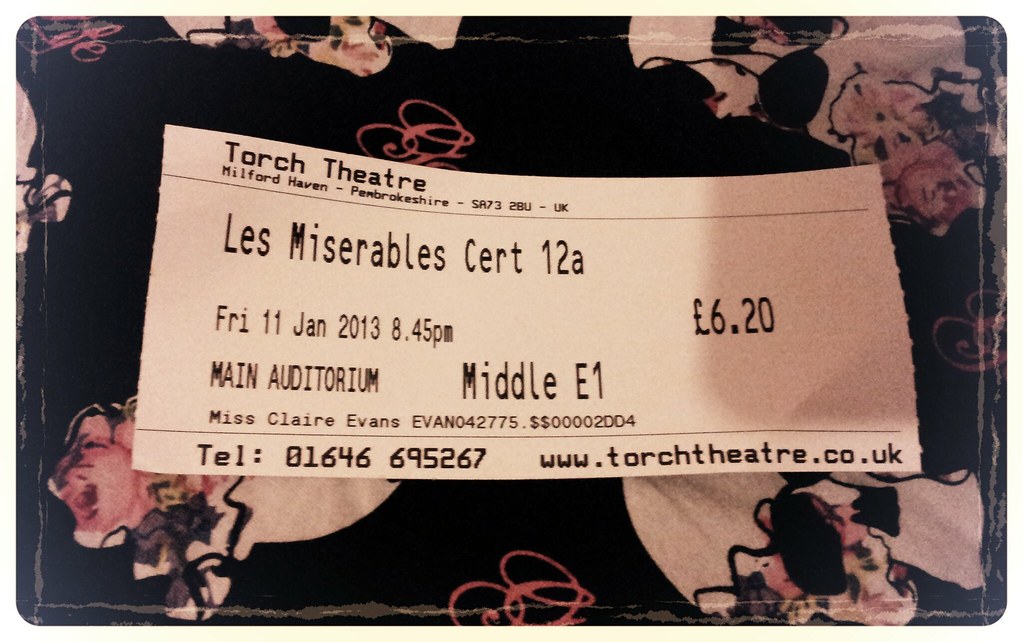 I Dreamed a Dream…that one day I would get to see Les Mis!

I love musicals!  My love affair began while curling up on the settee watching Rodgers and Hammerstein films on a Sunday afternoon.  But now I especially love the big West End Shows, some I love more than others (Rocky Horror!  Phantom of the Opera!), but you can bet your bottom dollar that I could have a good time at any musical that I got the chance to see!

When I was younger and first became aware of Les Miserables (from The Royal Variety Show and Musical Compilation Tapes, perhaps?)  I used to call it, “Les” (as in “Les” Battersby) “Miserables” (as in the English plural for “Miserable”- which doesn’t exist).   Say it in a dull English accent:   “L-es Mis-er-ab-les”.  Sounds awful, doesn’t it?

When I eventually heard the correct pronunciation, then I wanted the chance to get to say the word at every opportunity.  Say it in a sexy French accent:  “Le Mis-er-ab-ler” (actually leɪ ˌmɪzəˈrɑːb/ but I elongonate it!  The common way!  Sigh!).  Yes, it sounds so much better!

I have a long list of Musicals that I will tick off when I have seen them live and Les Mis is unfortunately still on that list!  I have listened to the full Soundtrack, and seen snippets of the big musical numbers, but I have never read the novel by Victor Hugo, seen the whole show broadcast on TV or watched the 1998 movie adaptation.  I attempted to watch it, but without the music, I’m afraid it bored me to tears.

So, when I found out there was going to be a motion picture adaptation Directed by Tom Hooper (The Queen’s Speech, Eastenders and Byker Grove!) of the worlds longest running musical, then I knew I had to go and see it.  I would have preferred to have seen it live in London (of course!), but for now this is the closest I can get to it.

Luckily, my local Cinema (and Theatre in one), the Torch Theatre, were planning to show Les Miserables from the first night.  Living in South-est West-est Wales, we do not always have this luxury!

I did have some doubts about the film before I saw it.  I worried it might be too dark and sad, and therefore too boring for me to enjoy…after all it is a story about “The Miserable or Wretched Ones” in France.  I don’t like all the songs in Les Miserables.  They aren’t all enjoyable to listen to as “Standalone songs”.  I didn’t know how well the Hollywood Stars would perform in a film version of a West End Musical.

I’m pleased to say that all my doubts were put to rest.  I was gripped the moment the film started.  The benefits of seeing the film, over the show are of course the amazing scenery and special effects.  Nothing can beat hearing an orchestra and singers live on stage, but Les Miserables-The Movie still manages to be rousing and VERY emotional.  I was really impressed with all the actors excellent efforts as well.  Where I have heard critics being negative about actors voices, it has in my opinion been part of the film, as they are singing live throughout (amazing!) and displaying their raw emotion in every song.

If you watch a clip from the film it really does not do it justice.  I saw the “Who am I?” scene on Graham Norton and wasn’t impressed.  However, when I saw it as part of the whole film and in the context, it completely made sense.  Anne Hathaway’s, “I Dreamed a Dream” is also a lot more successful in the film.

The sheer number of actors involved in this production is incredible, something the live show could not imitate.

I was moved to tears in parts of the show,  poor Fantine, the injust treatment of Jean Valjean, the death of innocents…  thankfully  The corrupt, Thenardiers, superbly played by Helen Bonham Carter (well she had already played the same character more or less,  Mrs Lovett in Sweeney Todd ) and Sacha Baron Cohen (his best role to date in my opinion!), provided hilarious light relief. 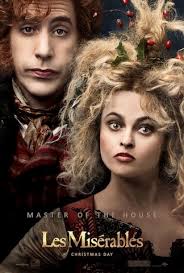 Their musical numbers, including “The master of the House” and “Beggars at the Feast” were the equivalent of “Oom Pa Pa” in Oliver and “Mistletoe and Wine” in the  Little Match Girl. They bring me back to my sophisticated (no not really!) beer swinging, Bier Keller days!


One part of the story that I missed the first time round was that the gorgeous, cheeky chappy Gavroche is of course the Thenardiers own son.  Yes! He was the baby in the basket that they swapped for the rich customers bag. 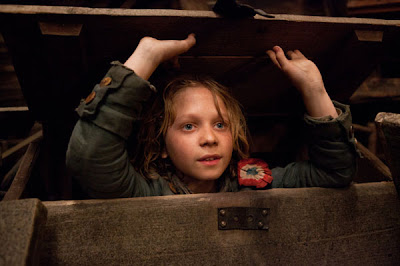 This story sums up the villainous Thenardiers very well.  I’m not sure if the Thenardiers or Gavroche themselves knew this, but Gavroche cried for Éponine on her death.  A good job really as her Mother and Father and Father certainly didn’t shed any tears for her.  Marius showed what a good character he was as he held her and wept for her as she died, despite not loving her in the way she would have liked him to.  This reassures us that he will make a good husbant for Cosette and look after he once her adopted father, Jean Valjean is gone.

Everybody who watched the Movie could not fail to be won over by Gavroche, played by Daniel Huttlestone.  He has also played Nipper in the West End version of Oliver.  Definitely a child star to look out for in the future!

There are so many different stories within this musical.  It could have been turned into Les Miserable The Trilogy- honestly!

Russell Crowe stars as Javert, the police inspector who dedicates his life to imprisoning Valjean once again.  He has based his whole life on the philosophy that a bad man is always bad, and a good man always good.  He is so determined and obsessed with punishing Valjean that he does not realise until it is too late that he has been the bad man, and Valjean has lived a life of greater good.


One critic pointed out that Les Mis portrayed poor people as bad, from the two faced workers who turned on Fantine, thus sealing her tragic fate and the selfishness of the French who would not open their doors to help the wounded during the Revolution.

I wholeheartedly disagree.  All kinds of people are good and bad.  I am ever the optimist and saw so much goodness from the poor.  Our main  character, Valjean, once himself given kindness, is endlessly forgiving, kind, helpful and honest.  Fantine only thinks of others.  The urchin Revolutionists who sacrificed their own lives for the cause of many.  It makes my heart bleed.


There is no shortage of death in Les Misérables, but there is also
inspiration for the future. 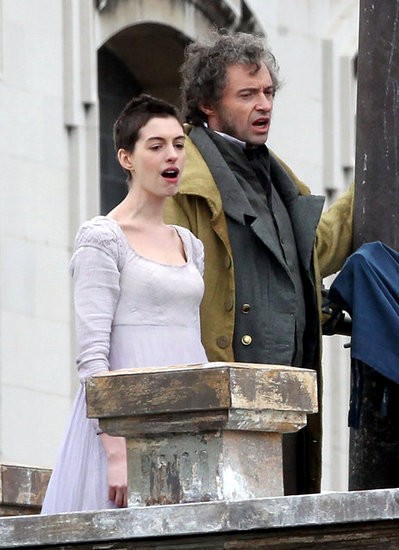 Jean Valjean’s dying scene was beautifully played by Hugh Jackman, Anne Hathaway, Amanda Siegfried and Eddie Redmaine (who had a real, “Where have I seen you before?” look about him!).

If the film had ended one scene earlier then I admit I would have crawled out sobbing.  However, “Do you hear the people sing?” with the HUGE cast ensemble bought me back to happiness and hopefulness again and instead I marched out singing,

Do you hear the people sing?
Singing a song of angry men?
It is the music of a people
Who will not be slaves again!
When the beating of your heart
Echoes the beating of the drums
There is a life about to start
When tomorrow comes!

Les Miserables has been so popular it is now being shown at the Torch Theatre until 3rd February.

Have you seen Les Miserables the Movie?  What did you think?  I’m looking forward to watching The Life of Pi and Django Unchained now!  I have diverse tastes!