Friday 14th September was Caitlyn’s fourth birthday! Hard to believe it’s been that long since my ‘surprise’ baby entered the world. My thoughts are with the Mum and baby at Camp Bastion, who are currently experiencing the same thing (also having a surprise baby I mean- I didn’t give birth in a “war zone” our local hospital is not that bad!).

Sometimes she acts so grown up and has an air of empathy and understanding. Then other times, she gets frustrated by the constraints of her age and reverts into a good old fashioned toddler tantrum! She sure knows what she wants and has a temper when she isn’t going to get it!

Her birthday morning was a bit rushed as we were setting off on our journey to Windsor. So the birthday (pirate!) banners were up but we didn’t have long to enjoy them.

She had time to open a few of her presents that morning. We had a quick breakfast, then we were off. 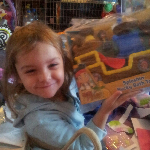 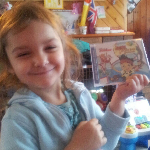 In the style of Adrian Mole’s epic school trip journey we had kids ask to go to the toilet, are we nearly there yet and fighting each other before we’d travelled the five minutes to Tescos.

Dave and I wanted to steal the infamous words about Ms Fossington-Gore,

“Mummy and Daddy are”on sick leave. All future.. trips have been cancelled.””

Rebecca was sitting next to Caitlyn eating a very juicy apple. Some apple juice landed on Caitlyn.  She went beserk because Rebecca had “Put GERMS on her!”  She was screaming at Rebecca to “GET AWAY FROM ME NOW!”  Danny was screaming at Caitlyn to tell her to stop shouting at Rebecca and sensitive Rebecca was crying.  Isabelle somehow managed to sleep through all this.  Very wise of her!


I “baby wiped” the germs off Caitlyn, calmly explained that Rebecca had not deliberately aimed the “juicy germs” at her!  Explained that there was nowhere else for Rebecca to go, no spare seat to move to and she had to stay sitting next to her and be kind etc.


Rebecca was hearing this as “There are no spare seats, Caitlyn won’t let me sit next to her.  I’m going to be left at Tesco Carpark.”  So she was still sobbing away.  I had to take each girl out of their carseats (which I hate doing as it means I have to then do them up again!  Have words with them individually, then got them to make up before I secured them back in their car seats again.


I managed this, but I needed a distraction.  Luckily, Aunty Ceri had bought Caitlyn the Jake and the Neverland Pirates CD for her birthday, so I ejected Ginger 555 and replaced it with Jake.  Oh what a hit it was!  Remember when Tom Jones stopped Space and Cerys Matthews from killing each other?  Well, Jake and the Neverland pirates CD did the same for my kids.

“You stopped us from killing each other. (Tom Jones, Tom Jones)

It is a great CD actually, not an annoying kiddies one at all! I can’t stop singing the songs from it! 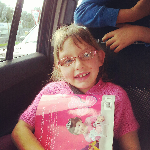 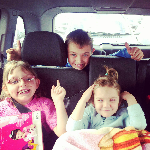 We were all happy and excited about our trip again.

Dave came back to the car to find three children dancing, two of which were singing, one baby sleeping …and a partridge in a pear tree!

And we were on our way to Cardiff…