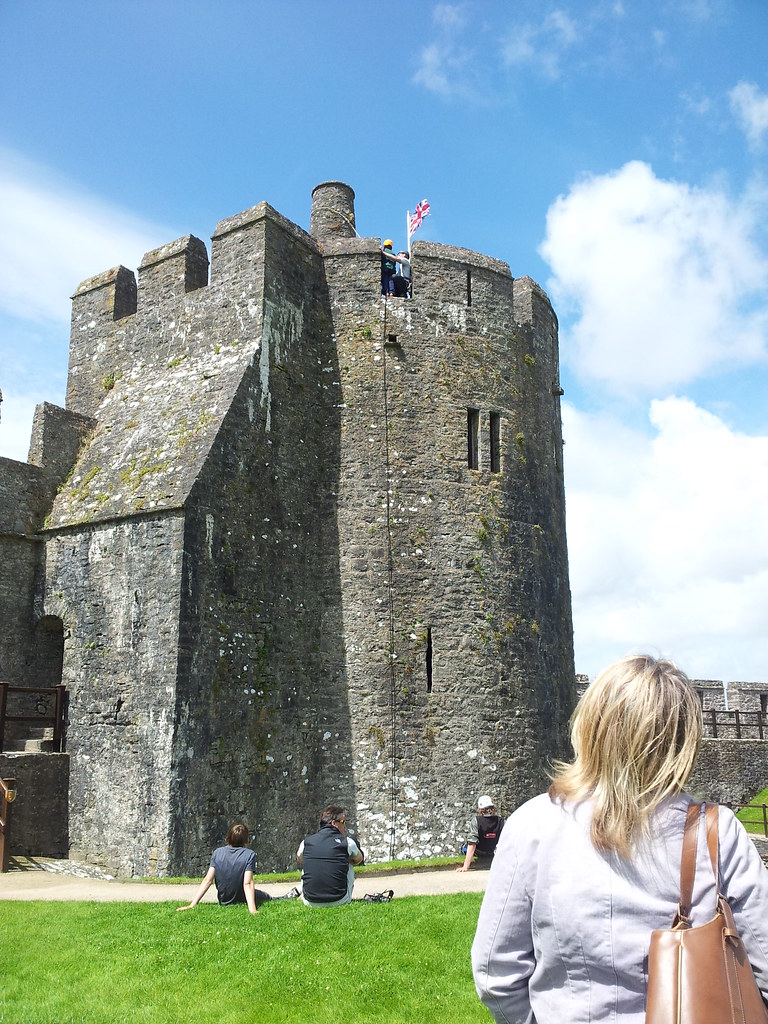 A couple of weeks ago Danny abseiled down Pembroke Castle with Cub Scouts.

This was something I didn’t ever think I would see him do.  Heck, Dave asked if he would always be on a ventilator when we were first told we could bring him home from hospital over nine years ago.  Thankfully, that was not the case!

﻿His Cubs pack mentioned the abseil quite a few weeks before and to be honest I immediately dismissed it and then forgot about it.  Danny has a Congenital Heart Condition, Hypoplastic Left Heart Syndrome and is on Warfarin.

Despite having had painful operations, procedures, weekly clicker (INR) tests and regular blood tests, the only thing that Danny will occasionally “moan” about regarding living with this condition is not being able to take part in the same things his friends are doing.

We encourage him to live a full life and join in with what he can.  He goes to Gymnastics (Special needs so there is a greater ratio of adults to children), Dance and Theatre School, Drum Lessons, Swimming and Cubs.  But he’s not meant to play competitive sports (especially contact sports) and all the rides he wants to go on at the fair and amusement parks have warning signs for people with Heart Conditions.

At his Reptile Birthday Party, Danny was really looking forward to seeing all the Creepy Crawlies in the Haunted Critter Bunk.  As we were waiting to go in, we spotted a “No Heart Conditions” sign.  I blurted out that Danny had a heart condition, so of course the owner had to say that Danny, the Birthday Boy, couldn’t go in the Bunker with all his friends.  I wanted to cry, but he was brave about it and understood the decision as he is so used to this sort of thing happening.  He did get a free “Fish Pedicure” instead as a consolation, but it was a pretty sad, unexpected moment.


Therefore, I reasoned that the Group organising the Abseil might have had a clause like this in their insurance policy, just in case, you know.  I get it, I understand how companies need to have them. “Elf and Safety” and all that.

At the last Cubs meeting before the abseil, one of the leaders double checked with me if Danny was coming along to the abseil.  I said, no, I’d assumed he wouldn’t be allowed to go.  She suggested I double check with the activity leader as it would be a shame for him to miss it.  I checked with his Cardiac Liasion Nurse, she was fine, as Danny was in good health at his last Cardiac Check up.  Then, I checked with the leader and he explained that as long as Danny was in good health and not overly anxious about these sort of activities, then they would be happy to take him.  They reassured me that it would be a nice, “relaxing abseil”!  Personally, I am terrified of heights, so that sounds like an oxymoron to me!

Danny was really looking forward to it.

When we got there, he saw the two towers which you could abseil from.  He bravely said that he’d like to abseil down both of them.  We agreed that he could, but suggested he try the smaller of the two towers first.

When his group were called to get ready, an enthusiastic Danny was first to volunteer for getting his safety equipment on. 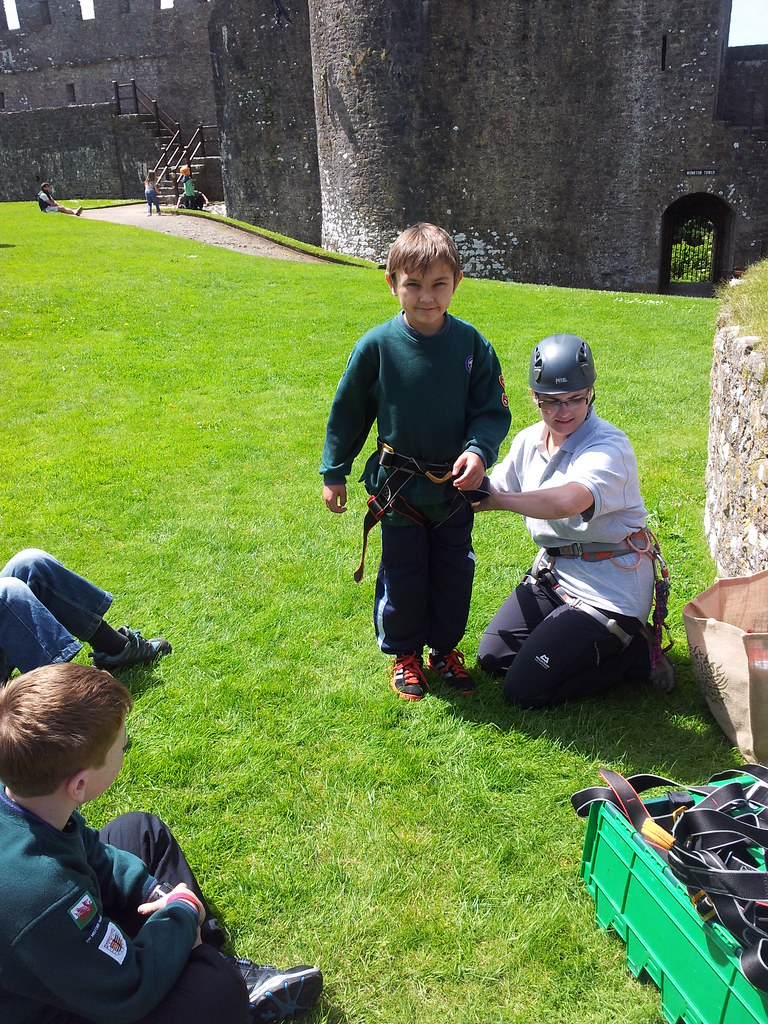 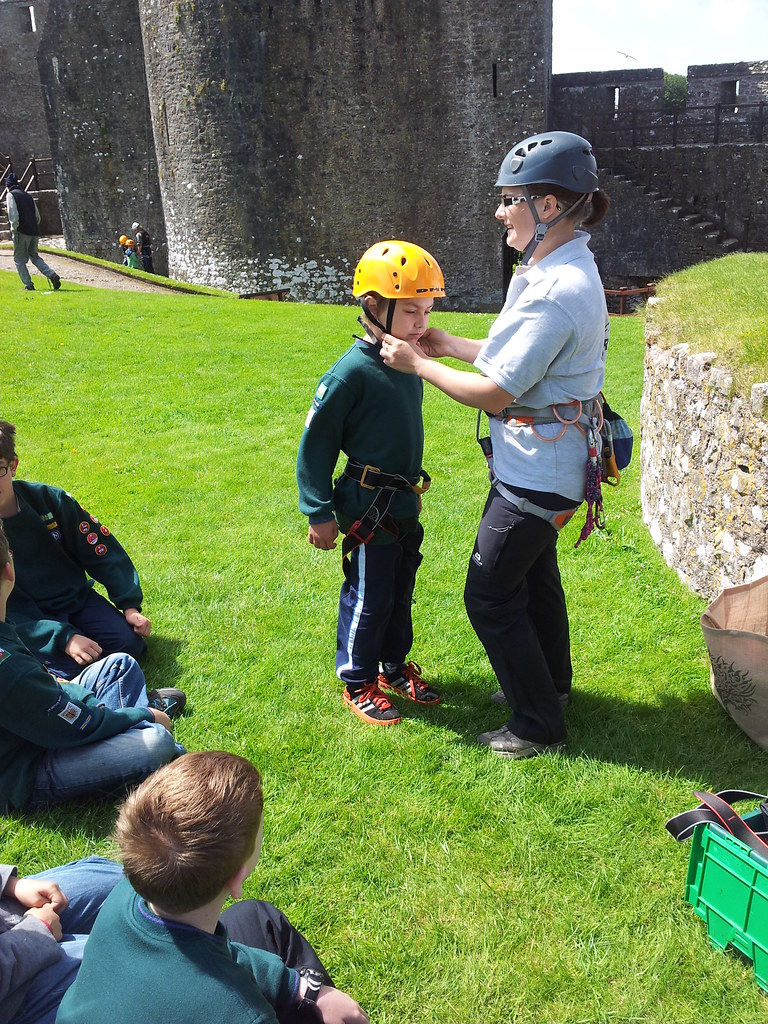 He looks so small in these photos!

He then walked straight up to the castle, a man with a mission, to tackle the spiral staircase of the tower.

I shouted to Dave to go up with him, I hated the thought of him being up so high without us.

I ran back to a good viewing spot with Mum, Aunty Ceri and his younger sister, Rebecca.  I got my camera ready.  I was anxious to see him appear at the top of the tower, but I presumed that he’d appear at the top, then abseil down immediately after, pose for a few photos, go tackle the even taller tower, more photos, pop to cafe for tea and cake, maybe play in the park before we go home. 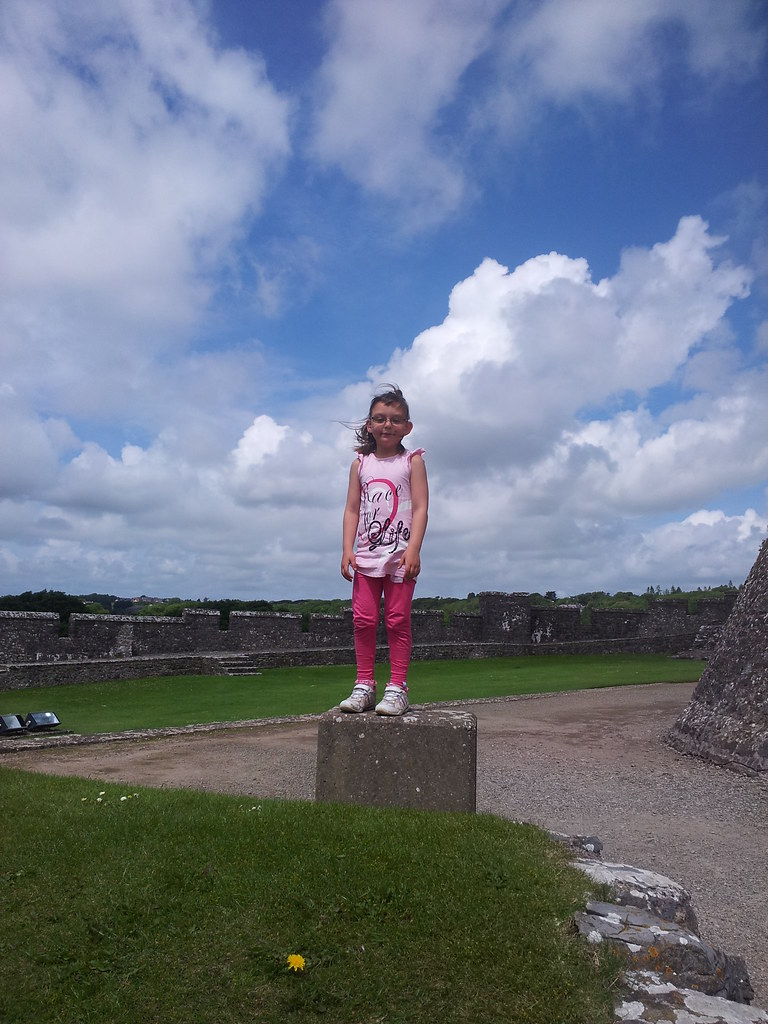 Rebecca doing her own “climbing” at the Castle.

Then, he was there.  At the very top. 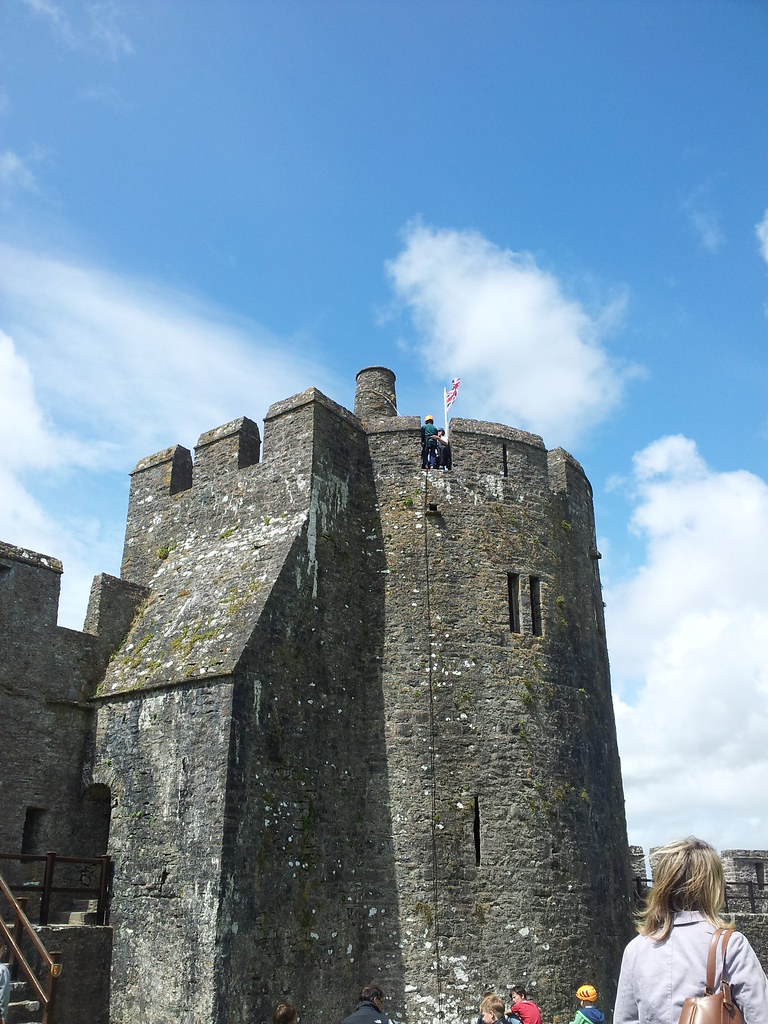 We waited.  And we waited.  And he was still at the top.  Someone explained that he was probably still listening to the safety information.  So we kept on waiting on tenderhooks.

Eventually he came down, but not down the outside of the tower.  Back down to Dave and the leader at the top.

Dave texted me:  “Danny’s a bit nervous, he’s going to watch somebody else go first then have a go.”

Fair enough I thought.  Probably a good idea to watch first, then he would have a better idea of what to do. 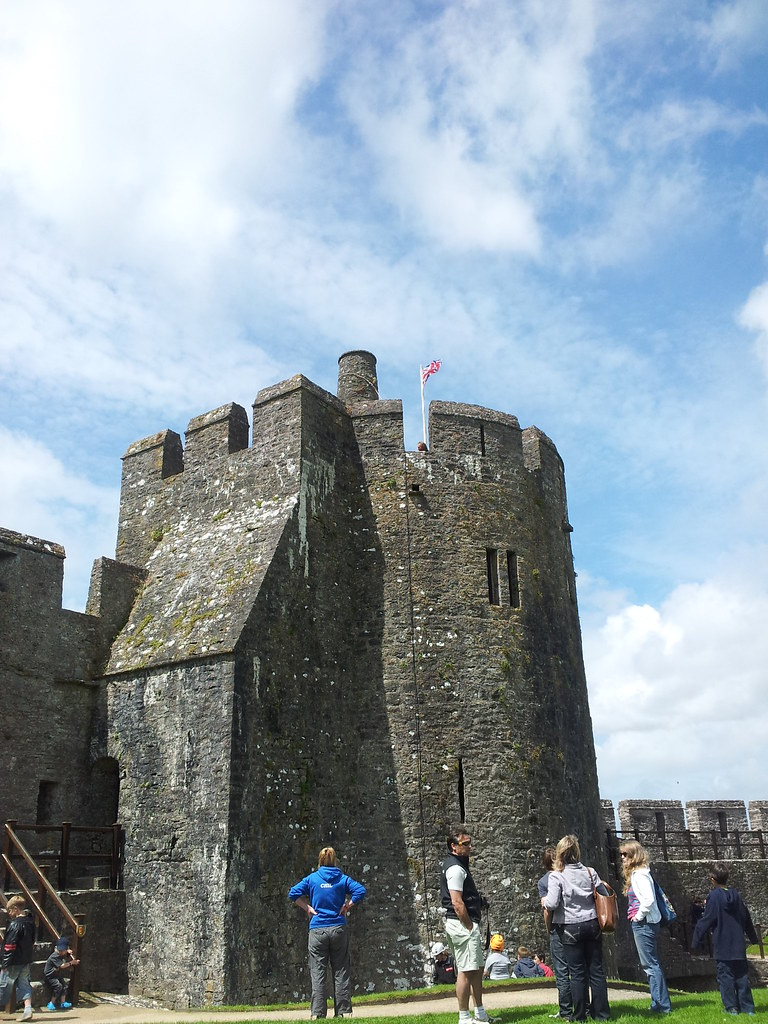 Dave at the top of the tower.

So then it was time for Danny’s second attempt.  Camera ready.  Danny lifted up to the crenelle.  Deep breath Danny.  You can do it.

We waited once more.  I was breathing deeply to keep myself calm.  Mum said that it doesn’t matter if he doesn’t do it, he’s been so brave for trying.  She just wanted him to be down on the ground safe with us again.  We were all really feeling for him being up there.

Dave lifted him down to him again.

They came down the steps to the bottom of the castle.

I ran up to them and sat with them on the grass.  Danny said, “It feels scary when I’m standing up there and about to step off.  I didn’t expect it to feel  so scary.”

I explained, that it was perfectly normal to feel scared being up that high and having to step backwards off  a very tall building.

“It looks higher from up the top because of the hill.”

Yes, that was true, from where we stood, we couldn’t see that the bottom of the tower was actually a good few feet further down than it looks.

Then he looked at me and asked, “Is it really safe?  It doesn’t feel safe when I’m up there.”

I reassured him that I would not be letting him do it if it was not 100% safe.  I explained that he didn’t have to do it if he didn’t want.  We could just go home.

So, up the stairs he went again.  Determined to the end.  That’s Danny.

Dave suggested he go down with an instructor for the first time to build his confidence.  Danny agreed as some other Cubs had done this too. 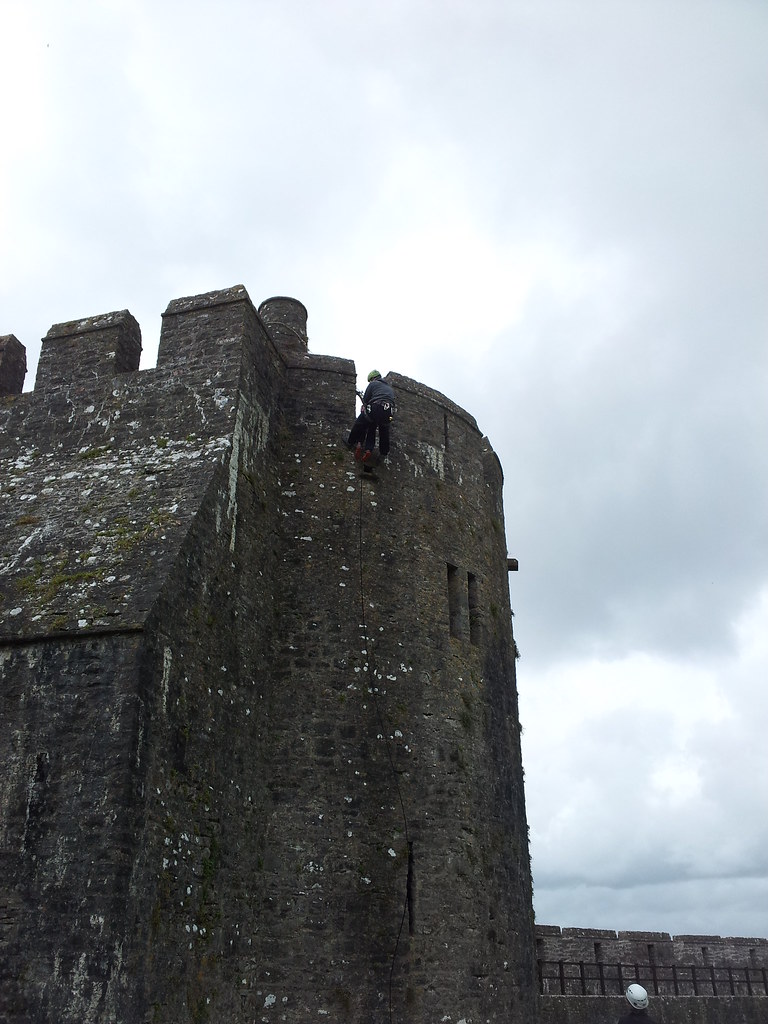 So, off he went with the instructor.  Who was brilliant, patient and fun.  I was just so relieved that he was doing it. 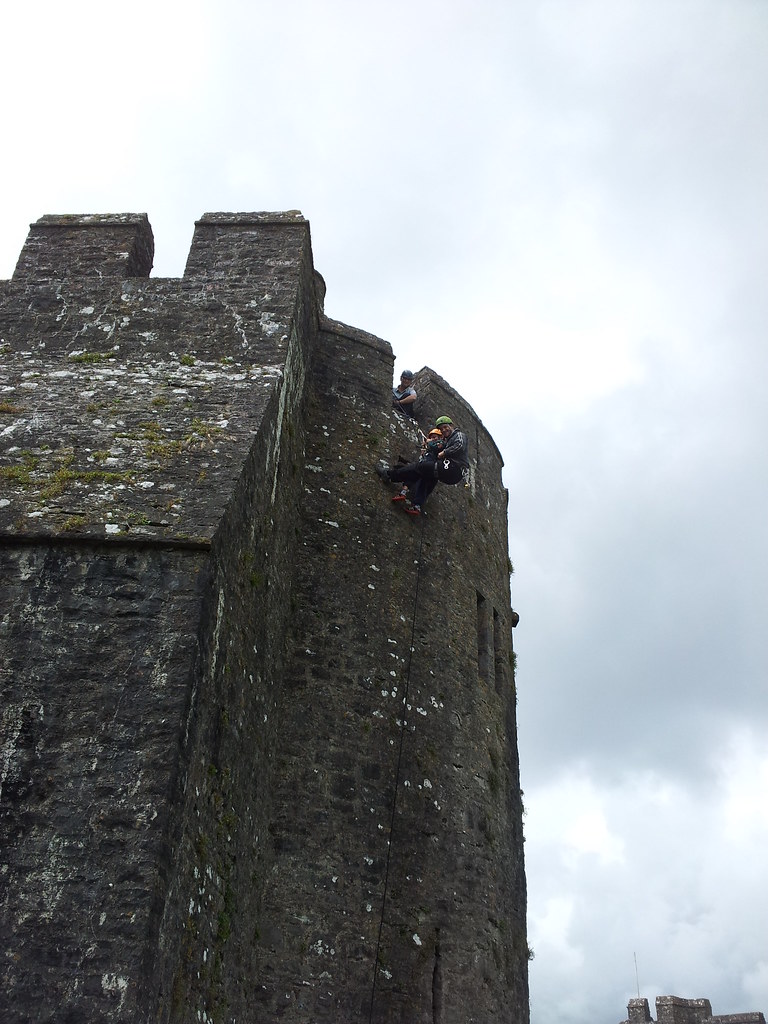 Here they are!  The instructor encouraged him to look around, to wave and shout to me.  He shouted, “I love Cubs” at the top of his voice.  The instructor made Danny feel so relaxed and calm up there. 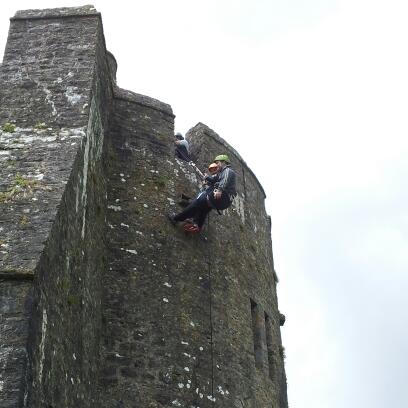 I loved hearing Danny laugh with enjoyment as he abseiled down.  He was on a high. 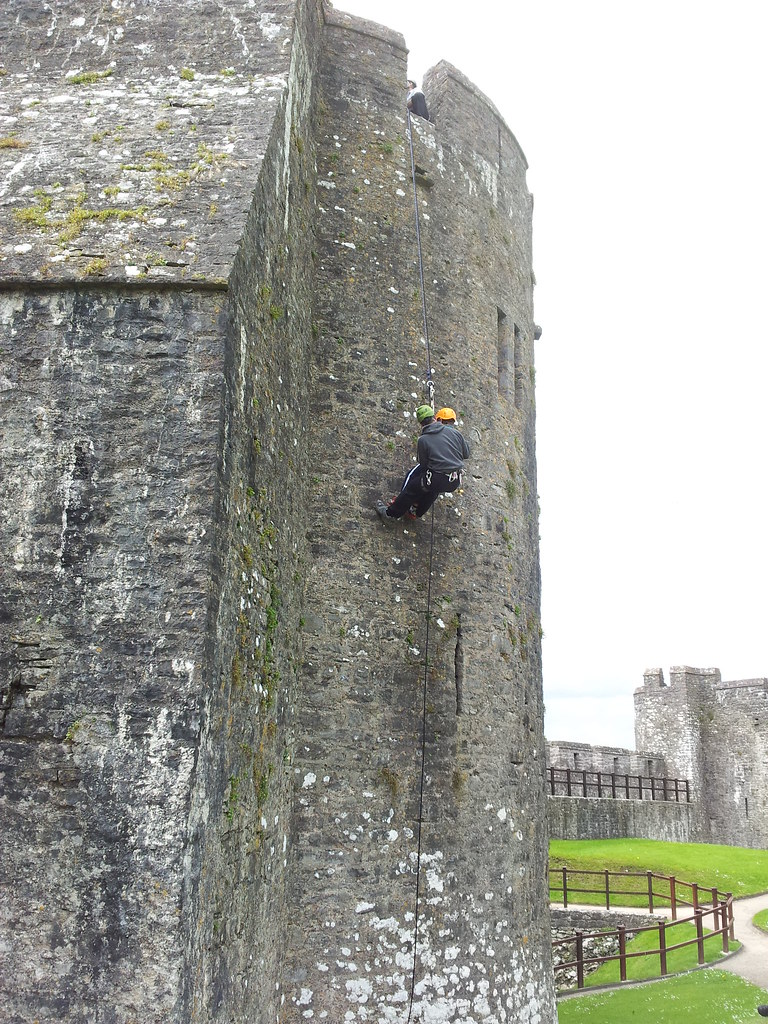 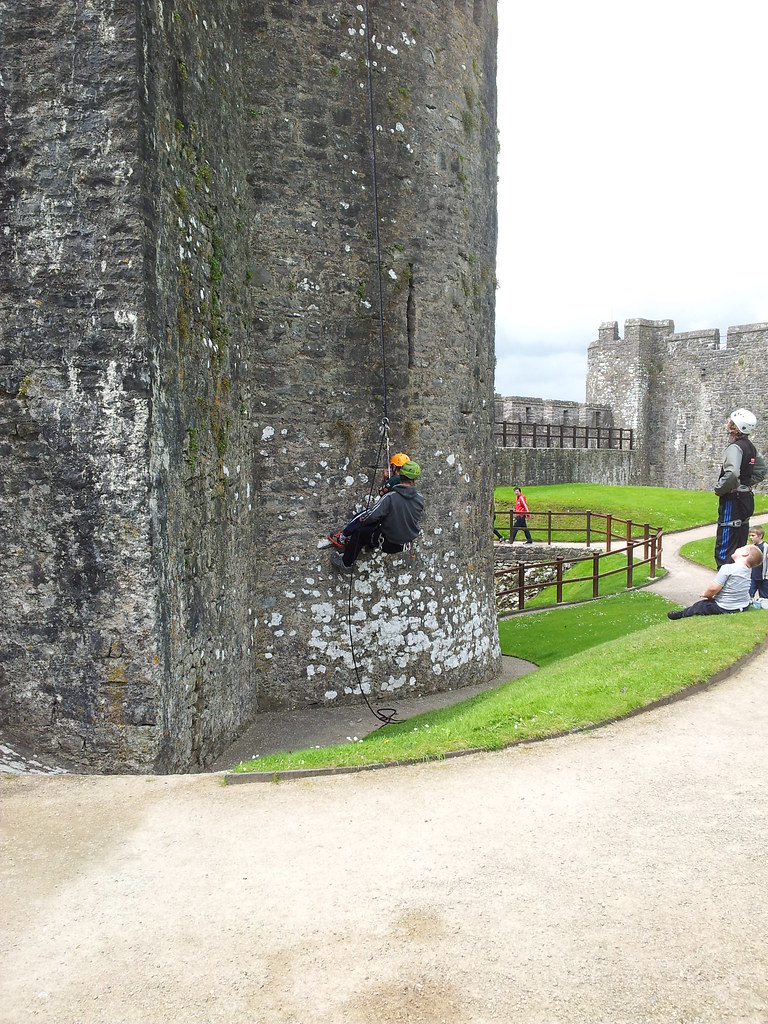 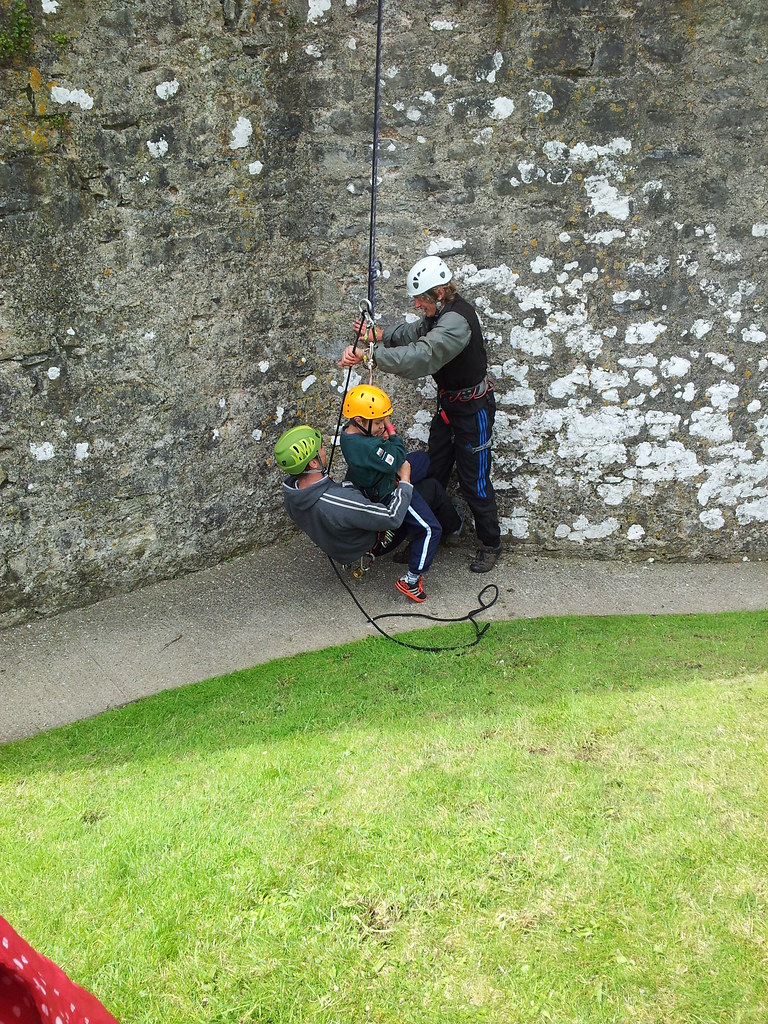 Danny was so happy and thrilled to have completed this abseil.  As he had spent so long contemplating doing it, it was hours later than his first attempt.  He had been running on adrenalin during that time.  So, now he was exhausted and needed re-fueling.

He said that he would go down without an instructor and tackle the big tower, “next time.” 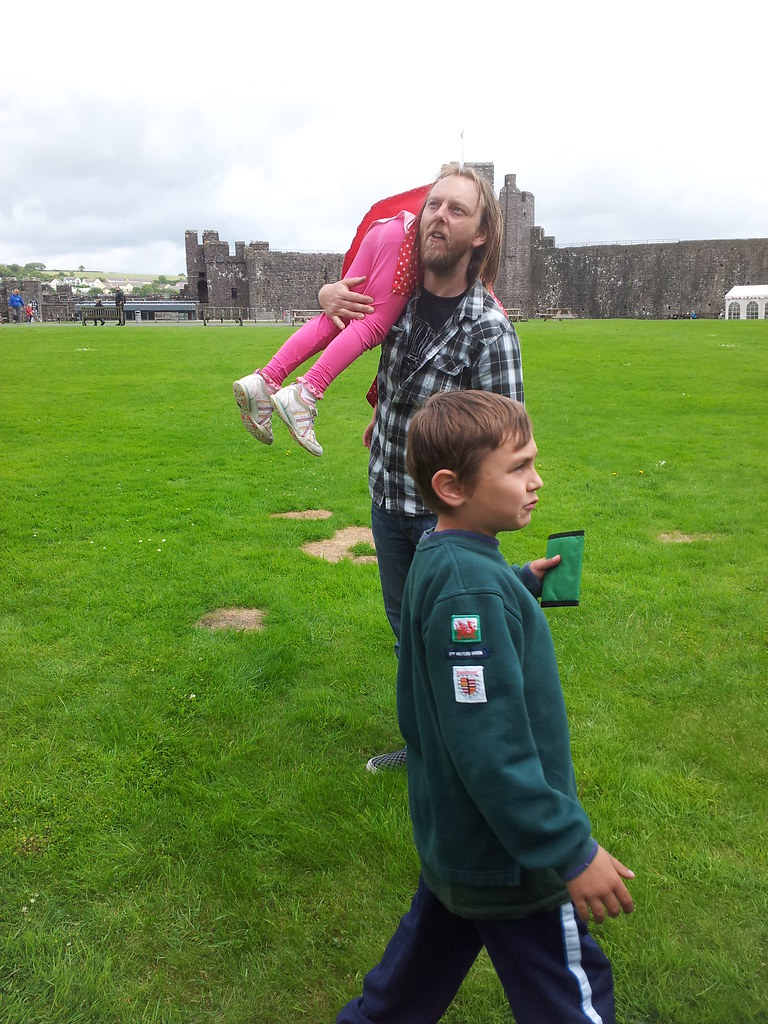 Here he is, wallet in hand to go to the cafe and buy a toy in the shop.

Well done Danny for your determination.  Sometimes we are at our bravest when we are scared of doing something, but we go pluck up the courage to have a go anyway.

Well done for raising money for Cubs.  Thank you to Cubs for giving Danny this wonderful opportunity.

Also a big thank you to Your Big Adventure, a friendly personal climbing adventure company who organised the experience.  I am terrified of heights and not really into experiences like this but after Danny’s experience I am tempted to give it a go next time (please say I didn’t really just put that in writing!).

Danny even made in to  the Little Heart Matters newsletter. 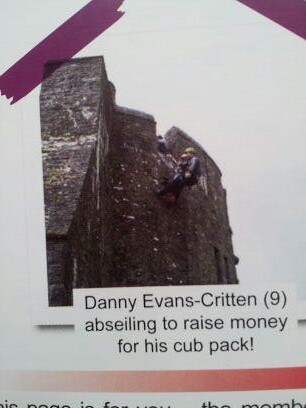 Danny, you may only have half a heart, but you live a full life.