Friday was a crazy day from start to finish.  Danny went off to Breakfast Club at 8am.  Here he is in his “red, white and blue” t-shirt (the best I could do with less than a day’s notice!) 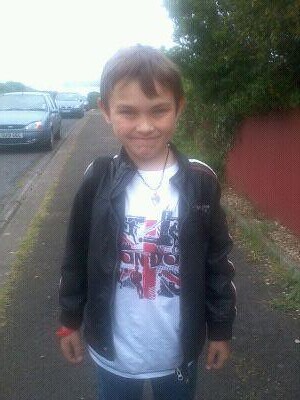 When he got to school he realised he hadn’t brought his homework folder, so I offered to bring it in after I’d dropped the girls off.

Caitlyn woke up and her face was all swollen as if she’d had an allergic reaction. She had put lip balm all over her face the day before (don’t ask!), so maybe that caused it. So, we kept her off school to keep an eye on it.

Dave went in to read a story to Rebecca before he had to go to work. However, she took too long to buy her fruit for fruit snack, so by the time she came back to class he had to leave as class had started!

I dropped Danny’s folder into him- I popped a new Union Jack cap and some flags into the folder that I thought he’d like. But he didn’t open his folder all day so didn’t know they was in there until I picked him up and told him!

I had to go to the big supermarket, seven miles away, to get last minute things for cub camp (Danny’s old camping mat had ripped, so I replaced that) I had no choice but to bring poor Caitlyn, with her swollen face, and, obviously, Izzy with me.

Everywhere is Jubilee mad. We spotted this Soldier: 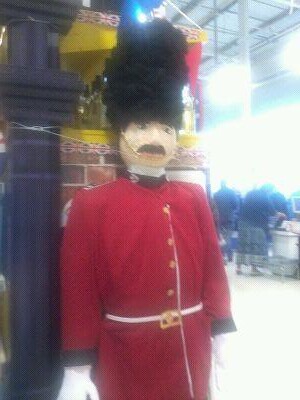 We only saw the “Queen” on our way out of the supermarket or I would have “snapped” her on her throne too!

We got what we needed and travelled home, it was time to make the girls dinner.  I made them the same time, then fed Isabelle her puree as Caitlyn ate her dinner herself.

A quick clean up and time to pack Danny’s bag.  I also sorted more laundry, taking clothes in, hanging more clothes out, Caitlyn helps me to hang the clothes up and Izzy loves to watch the clothes blowing in the breeze.

Then, it was time to pick Rebecca and Danny up from school.  Rebecca had to quickly change into her gym clothes.  The plan on Friday was, I was going to drop Danny and Caitlyn off to Aunty Jo’s so they didn’t have to wait an hour while Rebecca enjoyed her gym lesson, meanwhile, I would drop my niece Cerys off to her Jubilee Party then bring Rebecca to gym.

As usual, we were late driving to Jo’s, I rushed my children into her house, rushed Cerys and her Party food and flag into my car.  We rushed to the party.  I took her in, but as I went to say goodbye, the organisers explained that unlike the Christmas Party, an adult would have to stay with her.  I explained that I couldn’t as my children were in the car!  I quickly rang Jo and explained the situation, and that I was going to drop Rebecca off to gym (as she was already late), then I would pick her and my kids up so Jo could accompany my niece to the party.

So that’s what we did.  Eventually, myself, Danny, Caitlyn and a sleeping Isabelle turned up to watch the end of Rebecca’s lesson.  I spied an Olympic Torch shaped linen bag on the desk.  I nudged Danny and asked, “What do you think that is?”

“The Olympic Torch.” he answered.

The Coach at  Milford Haven Gymnastics Club, Andy Grey (also retired Headteacher of the children’s school) had been an Olympic Torch Bearer; and although I knew he hoped to place it in the Gym, I didn’t expect it to be there, right in front of me, on the desk!

The Secretary took it out of the cover and put it on the desk.  Some older children held it and exclaimed it was quite heavy.


I would have loved a photo of all of the children holding it, but personally didn’t want them to pick it up without Andy’s permission. He was busy coaching the next class, so as RebeccaRebecca in front of the torch. Caitlyn was standing there too then suddenly ran out of the picture! 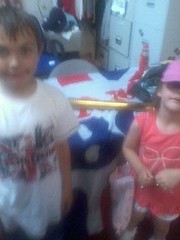 Hopefully next lesson, I can ask for a proper photo! I am thrilled that Andy has made the choice to bring the Torch around local schools and to keep it on display inside the Gymnasium. It is an inspiration to all the local children.

We then hurried to pick Dave up from work, I dropped him at home with the kids and made my way to my lesson.  My student wasn’t there, his parents rang him and he turned up, he’d forgotten what day it was…it really was that sort of day!

After my lesson, I rushed home to bring Danny down to his Cub Camp. 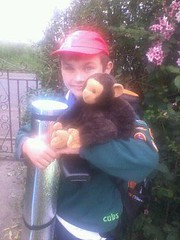 I knew he would have a lovely time, but I missed him so much when he was gone. I kept thinking of moments from my day that I wanted to tell him about and questions from his day that I hadn’t had time to ask…

I then came home to bath the girls, read them a story and put them to bed.

Then I had to summon up the last of my energy to go for a run with my younger sister, Ceri down Neyland Marina. It was lovely, we didn’t see a soul down there. Not one dog walker or cyclist. Just each other for company…along with ducks, swans, rabbits and other hidden wildlife.

On our run back to the car, we decided to add a “drill”, we ran up a steep hill, at the top of the hill, we were rewarded with a beautiful view and two lovely horses, before, it was time to run back down the hill, and back home.

Finally home to relax…until the next day started!  ﻿