Oh, what a day!  It started off so well.

We got up nice and early and all kids were in good humour.  We had to get to Juniors early for a family photo, we made it there by 7.45…we were EARLY for once!  So, of course we waited outside until the school opened at 8am.  Once we made our way to the photographer, he told us he was not planning to start until 8.30 am, this is what he had previously told the school, but the letter said 8am. I didn’t mind, but did worry that Isabelle would start fretting over food while waiting for a photo.  I didn’t really want a screaming baby in the photo.  Anyway, all kids queued nicely and soon he was all set up and ready to take photos.  Three  big kids sat down on the studio floor, and I place Isabelle on Danny’s lap.  Caitlyn had bought RaRa with her, so he soon became the photographers Cuddly Monkey’s friend.  I, as the asssistant(!) had to keep hitting him on the head with RaRa!  The things you find yourself doing at 8 in the morning!

It worked, all big kids gave their best smiles.  Isabelle was in a serious mood though, so we may have a grumpy baby in the picture…but she wasn’t screaming!  🙂

We dropped both the kids into their Breakfast Clubs, as there wasn’t much point coming home and back again.  Then I popped home to have a relaxing cuppa with Dave before he made his way to work.  I had a few bits and bobs to get in Tesco, so I went there with the girls.  Isabelle slept all the way round in her carrier.  Caitlyn had been so good all morning, so she got to do this: 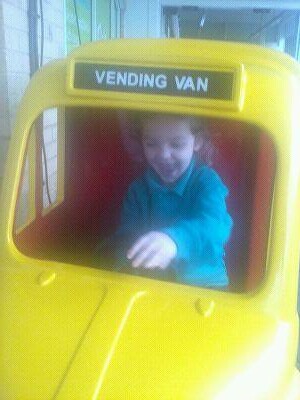 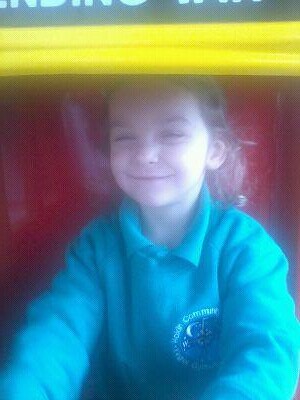 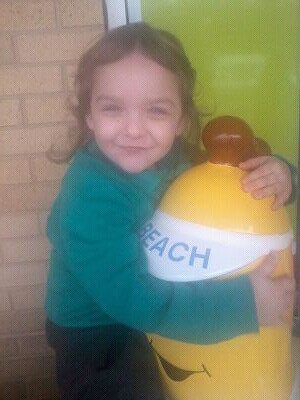 Then we came home and this is where it started to go wrong. I went to hang my coat up and the coat hooks and all the coats fell down on me. My fault as there have been too many coats hanging on it for a while. Then, Caitlyn had also asked for a hot choc when home. I went to make that for her and dropped the open tub of hot choc on the floor. Isabelle wakes up and remembers she hasn’t had milk for over three hours. So, I had to feed her, knowing there was hot choc and coats everywhere. While I’m feeding Caitlyn knocks sand over from a Sand Art kit of Rebecca’s, I finish feeding and start to tidy up all those messes, then I get a phone call from Rebecca’s school, she’s not very well, can I collect her. So, we dash back into the car and collect poor Becca. She has a headache and a temperature. I bring her home and give her some calpol, lay her on the settee. I have to quickly make Caitlyn dinner, before bringing her to afternoon school…I later realised as Rebecca had lost her appetite, I could have offered her lunch box to Caitlyn. Caitlyn goes to school and I can finally sort the mess. Time flies and I need to go and pick Caitlyn and Danny up. Poor Rebecca cries as her head hurts when she’s not lying down, so she can’t wait to get home. She asked to be left in the car, while I fetched Caitlyn. Caitlyn wants to go down the slide THREE times and has to count all her numbers on the Caterpillar and walk around the big clock telling the time, while I want to hurry back to Becca! We get back, then it’s time to wait for Danny. He’s all upset as he’s fallen out with a friend, so I deal with that and get home.

With Rebecca being ill, we had to miss Ballet. Here’s a picture of them dressed for Ballet a few weeks back: 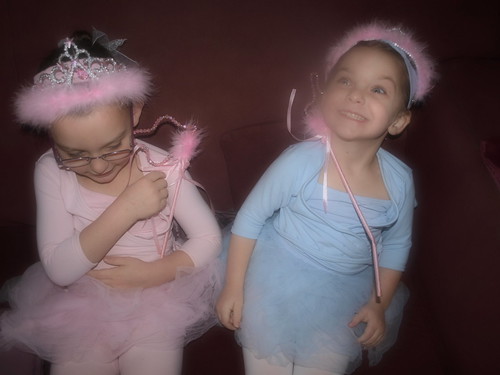 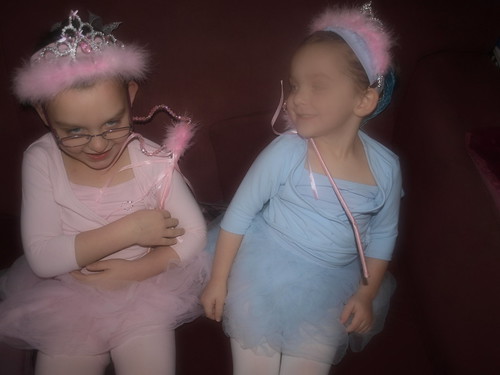 So, instead I made a cake for lunchboxes. Vanilla Sprinkle Tray Bake as requested by Rebecca. 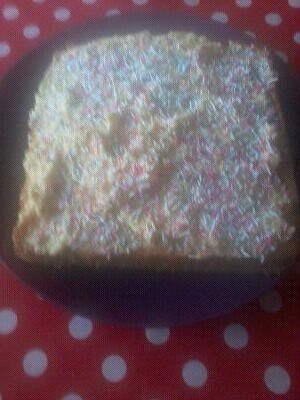 Make tea, quickly eat tea, Dave comes home and I bring Danny to Cubs. Then this is where the day gets worse. I get back from dropping Danny off, hoping to clear up from tea, make sandwiches, vac and sort clothes etc. While I’ve been out, Rebecca has told Dave her head hurts because she whacked it in school today. So, we realise we’re dealing with a sleepy girl with a head injury, not a sleepy girl with flu! We ring NHS Direct, who say like they always do to take her to nearest A and E just in case. So, we’re back in the car, pick Dan up early from Cubs and drop him and Caitlyn off to Mum, while we bring Rebecca and Isabelle to A and E. Anyway, most importantly, Rebecca is fine. She’s still in pain and we need to keep an eye on her and let her rest tomorrow, but she’s fine, bless her. But, I’m exhausted. It was late putting all kids to bed, so a hard night for everyone. Danny will be school dinners tomorrow, which saved me from making lunches.  I’m hoping for a better, more relaxing day tomorrow! 🙂 Hope everyone has a good day!