Wow!  What a day…weather wise.  It doesn’t seem long ago since every time we left the house, I had to make sure four kids had their woolly hat on, scarf, gloves, not to mention extra layers and thermal vests!  😉  Now today, they’re in the garden in shorts and t-shirts…then without tees until I nagged them to put them on again!

Except for this one though… 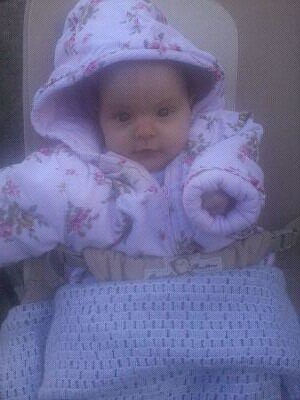 I made sure she was wrapped up in her rose print snow-suit.  I love this so much, I bought it in an Adam’s sale for Caitlyn.  Her middle name is Rose and she got really good use out of it.  Lovely to see it used again.

The girls had another dress rehearsal this morning, as the show is a week tomorrow!  I was a bit worried as yesterday, Caitlyn decided to spend all her rehearsal time with me…instead of rehearsing.  However, big sis, Rebecca informs me that Caitlyn joined in today…and did really well.  That’s good news, but I’m still aware that on the night, she may decide to not perform, she is only three.  That will be fine, but will mean that she will have to watch on one of our laps as I haven’t bought a seat ticket for her.  Also, we’re all sat separately this year, as I was late getting tickets due to lack of funds.

It’s strange Danny not being in the show this year.  I hope he doesn’t regret it on the night, but sure he will enjoy watching his sisters.

Dave made a “Giant Jaffa Cake” today after being inspired by a recipe on Saturday Brunch Playlist.  He loves cooking a dessert on Sundays…and other days too.  He’s also really good at making do with what we’ve got as well, so we don’t have to buy in.  It was lovely!  No pic of the whole cake as it was eaten too quickly.

Caitlyn is going through a phase of helping herself to food from the fridge…my Mothers Day Chocs, some leftover choc biscuits and cooking chocolate etc.  We have talked to her, but I wasn’t sure it had sunk in.  As her bedtime story I read a book about “Telling the Truth”, in the story the big sister eats up all the little sisters birthday cake.  She looked very sheepish, and thought it was terrible what the big sister did, so I’m hoping this will sink in a bit.

She must follow me as when I was a child, my parents bought cream cakes as a big treat.  I couldn’t resist and licked all the fresh cream off them then put them back in the fridge.  🙁  I know it’s normal part of childhood, in all the experiments if children are left with a cake and told not to eat it, most do, and then lie about it…even with cake all around their mouth!  Ha ha!  But it’s very sad when it means there are no choc biscuits left for her brother and sister…not to mention her Mum and Dad!  😉

She is a funny one. 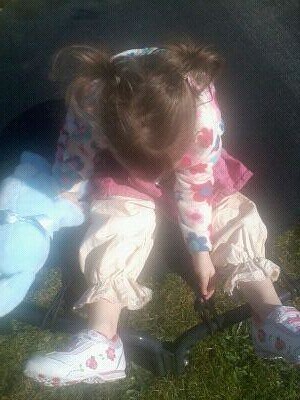 We had lots of fun in the garden today.  Danny’s friend came round to play.  I cleared a teeny section of the garden and planted more seeds.  I am making progress VERY slowly, but I’m trying to think of the positives that I’ve done, instead of what I haven’t.

I attempted mowing the lawn on Friday.  I managed half fine, then hit a stone, and knocked the blade out of shape.  New blade needed…AGAIN!  I felt miserable that I had only mowed half the lawn, then thought about the “is your glass half full or half empty analogy” and decided to be pleased that I had mowed half.

I can’t wait until I next get money in account to order a new blade to complete the rest though!

Hope you enjoyed your Sunny Sunday!

I’ve loved reading all the British Garden Posts today.  We’re not used to nice weather so we really make the most of it when we have it…and when we can.