Well, there’s still illness going around in our family.  Poor Caitlyn’s turn to be off school today.  She slept all afternoon, bless her.

I was relieved that Danny felt better as he was taking part in a Gymnastics Competition today.  He was representing his school along with a couple of school friends.

He had to do a floor routine, bench routine and vault. 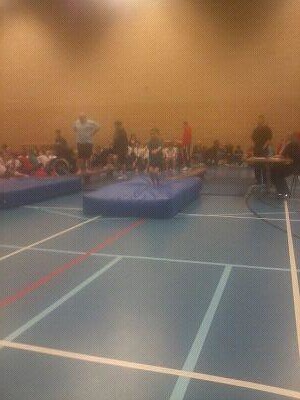 Isabelle came along too and was so good.  She smiled and “talked” to lots of people.  I wasn’t entirely comfortable feeding her there in such a public space, but I had no choice and was well covered up by my blanket.  It’s a lot more comfy feeding her at home with pillows around me and a cup of tea though!

Danny did his best, as everyone did and behaved well.  He isn’t very good at “waiting around” and there was a lot of that to do today.  After taking part and being judged in his routines, it was time to sit and watch the Rhythmic Gymnasts.  He had ants in his pants by then, so he sat with me and ate his dinner.  Then he played with his lego, he needed some “time out play time”.

Then they began the Presentations.  There were lots of prizes so this took a while.  Finally, it came to Danny’s section.  His friend, Tom won first place in one routine…then it was announced that Danny had come First in the next routine!  Did he walk up proudly, stand on the podium and receive his medal?  No!  He was in the toilet!  Then the medals for the next routine were presented…once again Danny came first…and was still in the toilet.

He walked into the room just as they began to announce the next results, too late to have his moment of glory!  Typical Danny!  😉 They very kindly said he would be presented with his medals at the end. 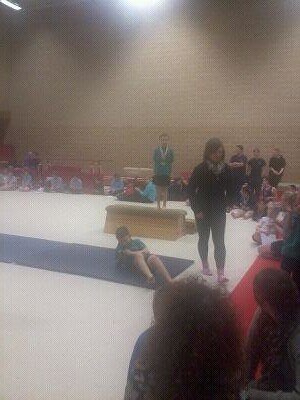 Then after receiving his two Gold medals, he got a certificate for taking part. It’s good when every child receives something for taking part as we can’t all be winners, but it’s lovely to have something to show for the effort you put into something. Danny can’t wait to show his medals to his teacher tomorrow and in assembly on Friday. Overall, his school did very well, collecting lots of medals between them! 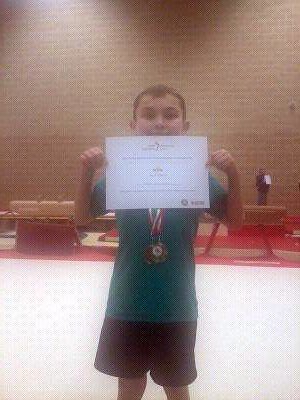 This evening I went to see “Me and My Girl” at our local theatre. It was an Amateur production and I thoroughly enjoyed it! I shall be singing lots of these songs to Isabelle tomorrow! “Oh me! Oh my! In case a certain little lady walks by!” Hope you all had a good day!